Gold jumped to $1,292.50 on Friday as the stock market briefly collapsed. Stocks recovered, and gold retreated. Precious metals will remain under pressure if stocks remain buoyant.

Our primary analysis has called for a breakdown in gold. The ideal scenario expected a decline in gold below $1,262 (the October low) and subsequent bottom in mid-December. Precious metals tend to bottom in December if there is a rate increase. The probabilities for a December 13th rate hike stand at 92%. Consequently, a mid-December low in gold seemed appropriate.

Moreover, the multi-year basing pattern in gold argued for a decline to $1,200 to achieve symmetry. But, with the FED meeting less than 2-weeks away this scenario is becoming unlikely. Gold would have to drop precipitously to reach our objective within the allotted timeframe.

The extended consolidation period is challenging our analysis. The deferred breakdown in gold suggests that either our timing or our price objective is wrong.If gold maintains the $1,262 low, then our cycle/price analysis was flawed. If gold slips below $1,262, but fails to bottom in mid-December, then our timing was off. In that event, prices may bottom later in December or early January. I see an argument for January if the stock market rallies through year-end.

Precious metals remain vulnerable going into next week. If the bears can press the action, we could get a recognition day and distinct breakdown in precious metals.

-US DOLLAR- The dollar pulled back after testing the 10-day EMA and short-term trendline. Closing below 92.68 would form a swing high and likely top. Prices would have to overcome the trendline and the 93.50 level to attack resistance at 94.10. 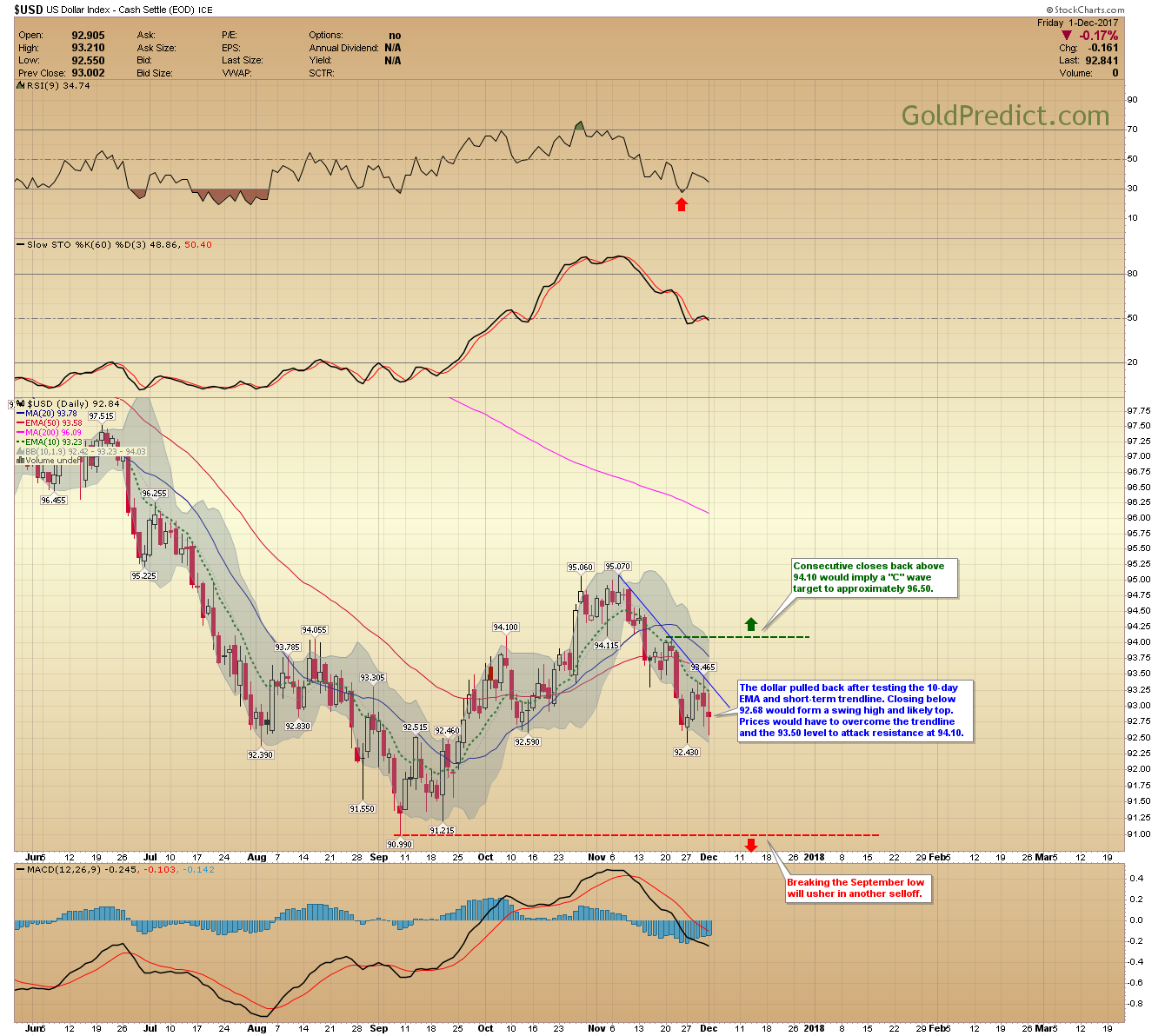 -GOLD WEEKLY- The weekly chart remains in a 9-week trading range. Our preferred scenario calls for a decline to the lower trendline, completing a symmetrical basing pattern. Prices would have to break the October $1,262.80 low to reinforce our outlook. 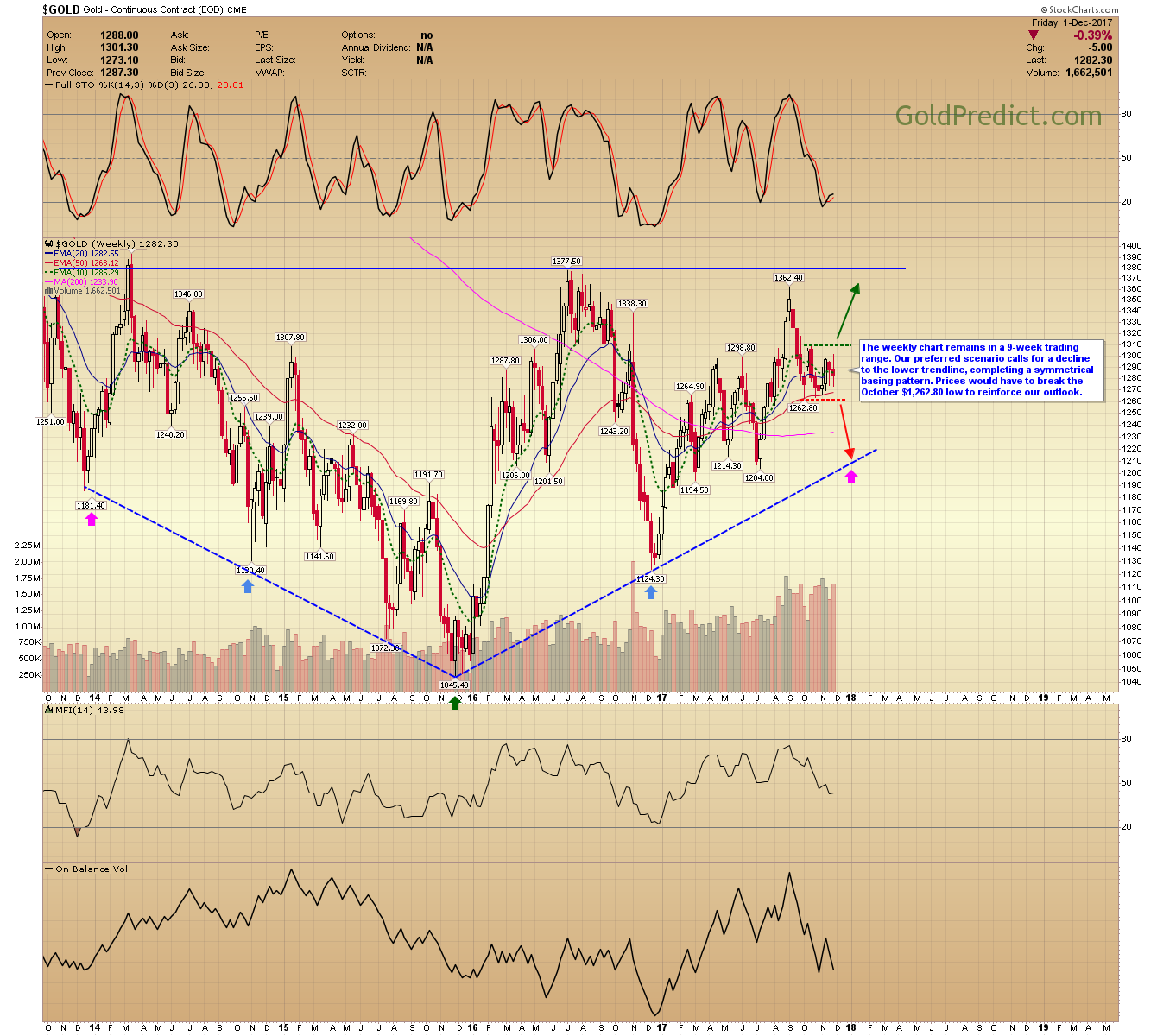 -GOLD DAILY- Gold spiked to $1,292.50 as the S&P_500 plummeted 45-points in just 30-minutes. Participants feared Trump’s tax bill would fail in the Senate. Gold and stocks reversed moments later when Mitch McConnell said they had enough votes in his chamber to pass the tax bill.

Additional weakness early next week could trigger the recognition day needed to confirm a breakdown. 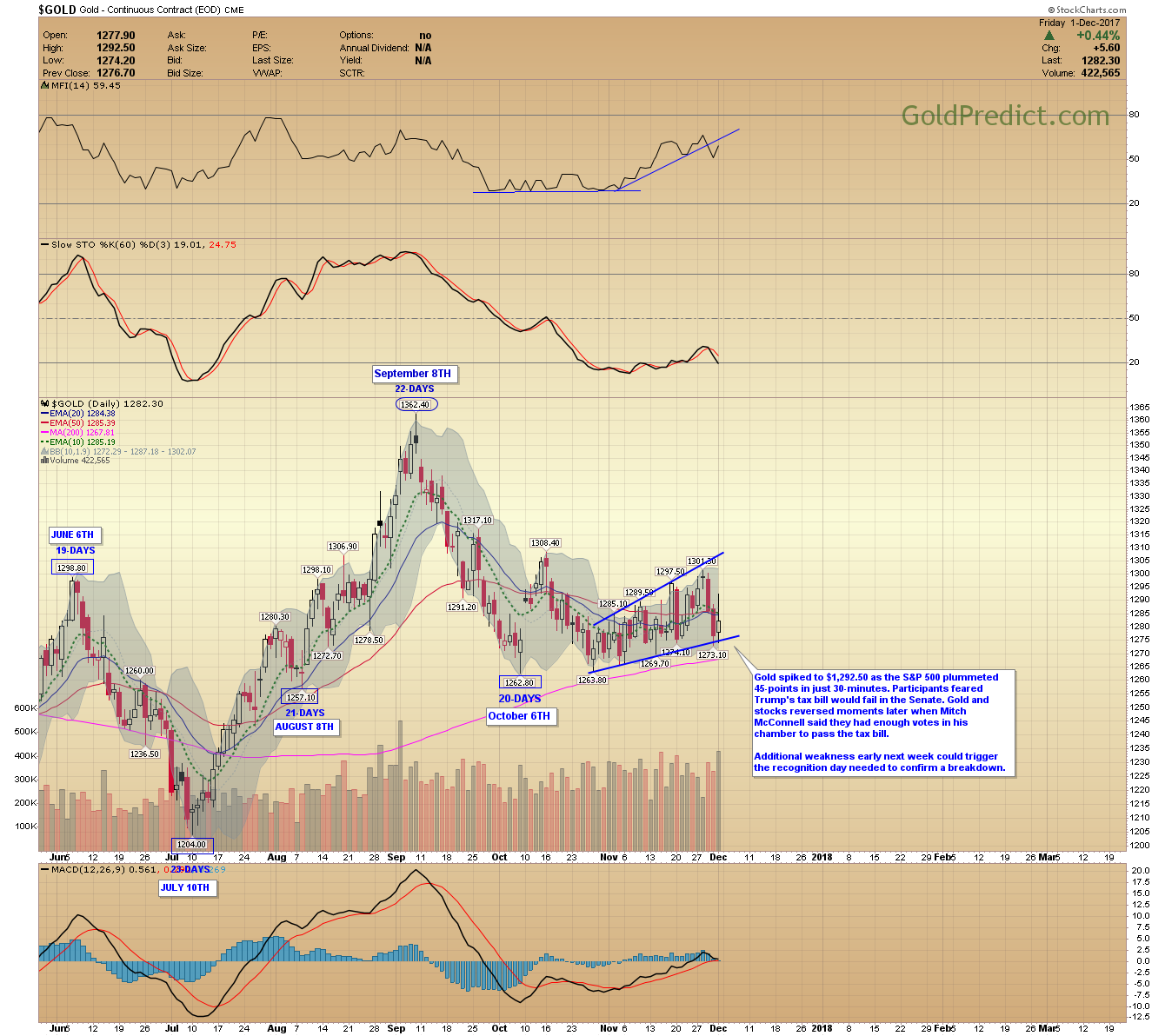 10-YEAR YIELDS: Yields swang wildly falling back into the trading range. Rates need to close above the 24.28 gap zone to confirm a breakout and establish a breakdown in gold. 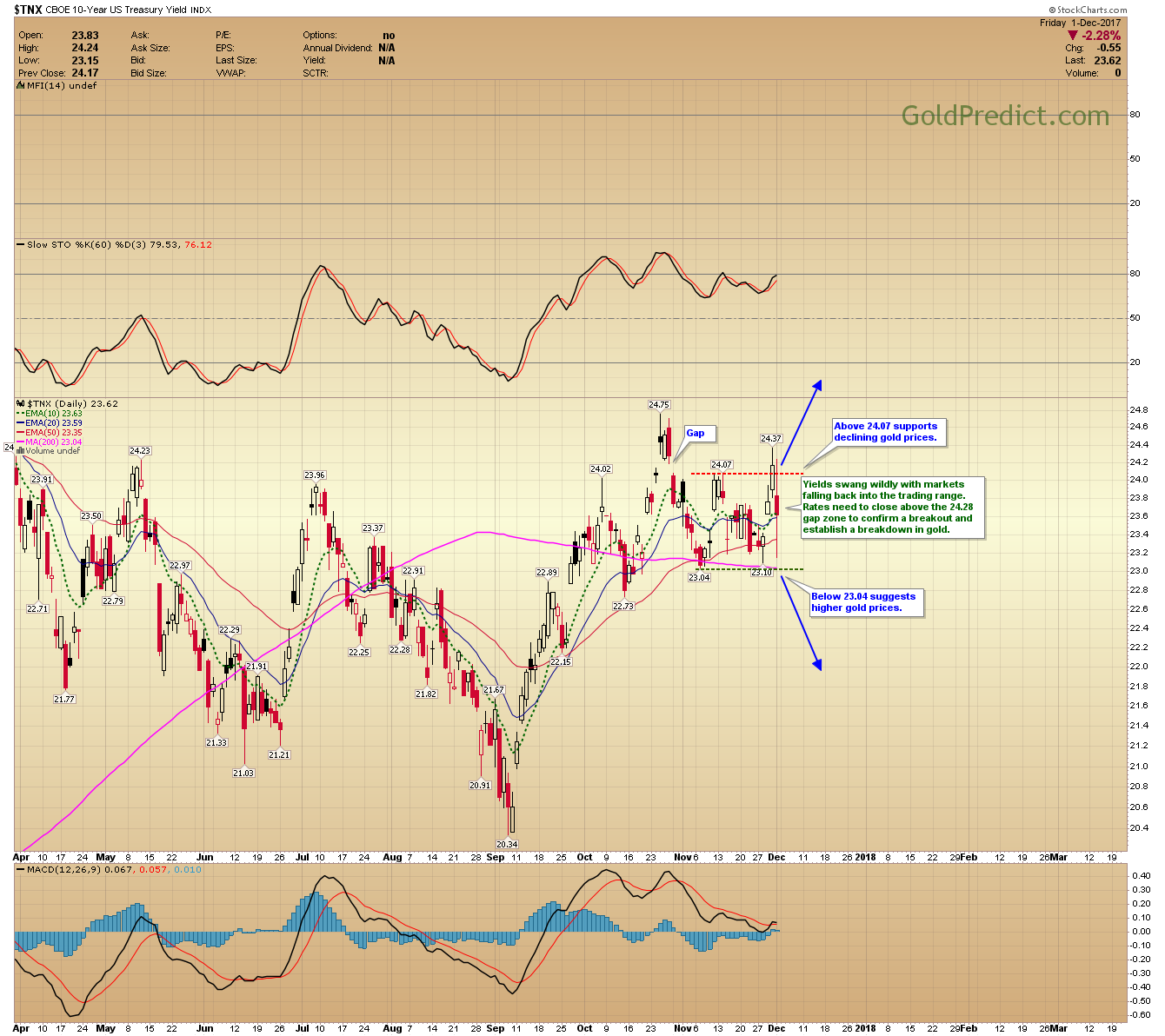 -SILVER WEEKLY- The weekly chart shows a clear breakdown of the 5-week consolidation. The decline thus far has been modest, but if gold breaks the October low ($1,262), selling will likely accelerate. 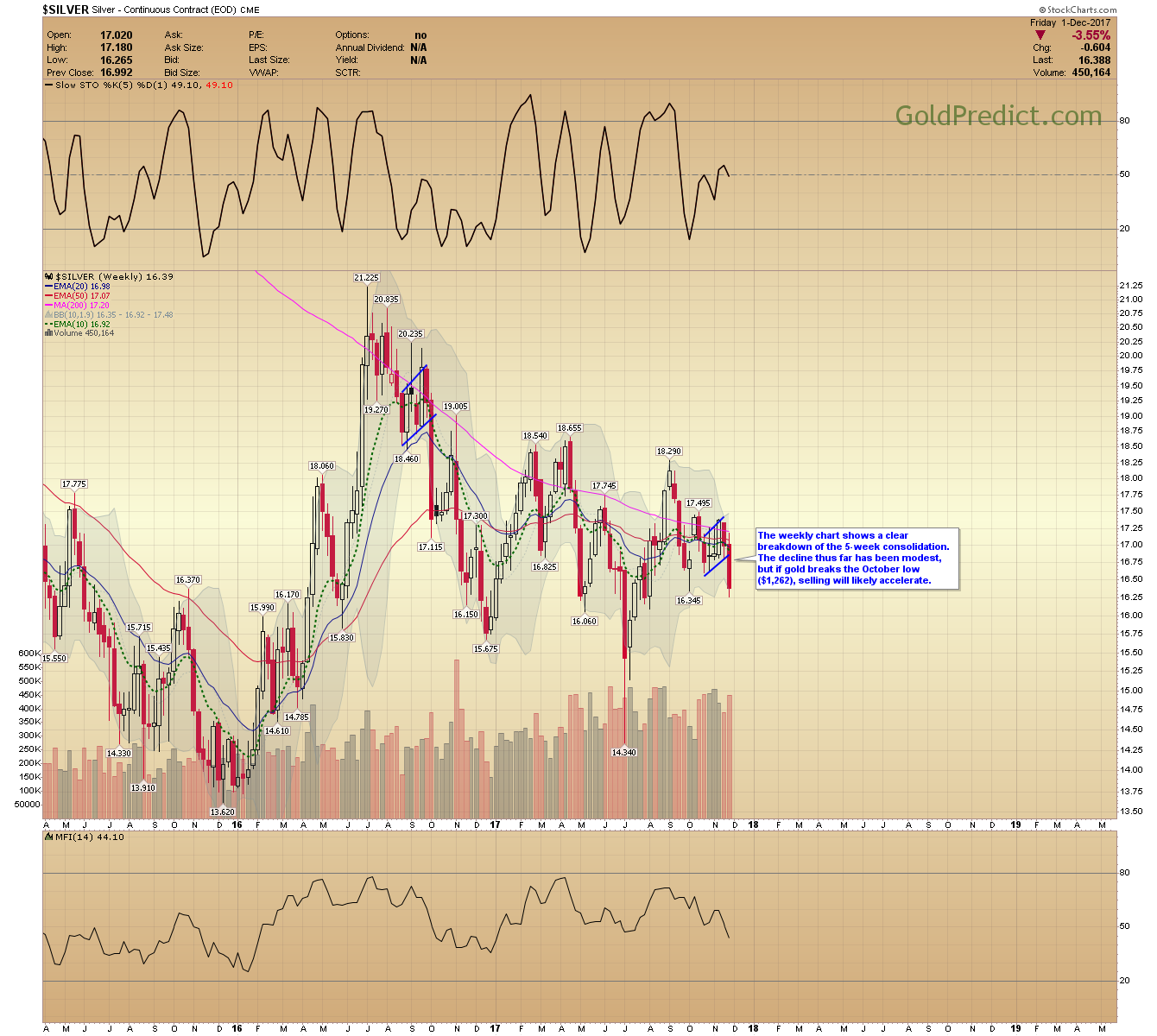 -SILVER- The daily chart broke the October low on Friday and made new closing lows. Prices are attempting to hold the $16.30 level. We could see sharp selling in silver if gold finally breaks below $1,262. 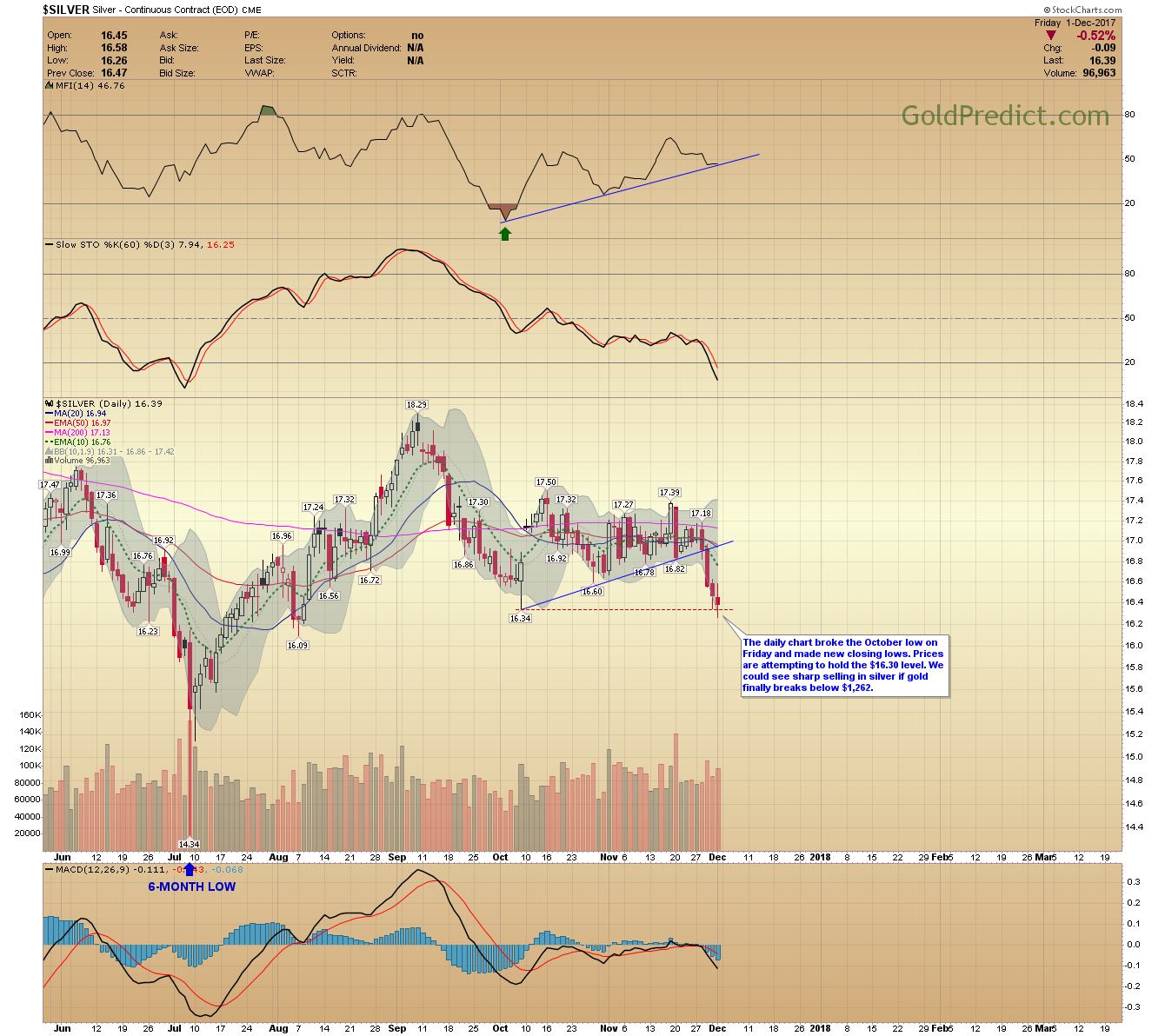 -GDX- Prices swang wildly and formed a bearish reversal. It’s possible Friday’s bounce was an attempt to fill Wednesday’s gap. The chart looks vulnerable. We could get a recognition day next week if gold breaks below $1,262. There is significant support around $21.00. If the HUI:GOLD ratio breaks long-term support (see chart), GDX could collapse below $21.00. In that event, the next area of support is $18.50. 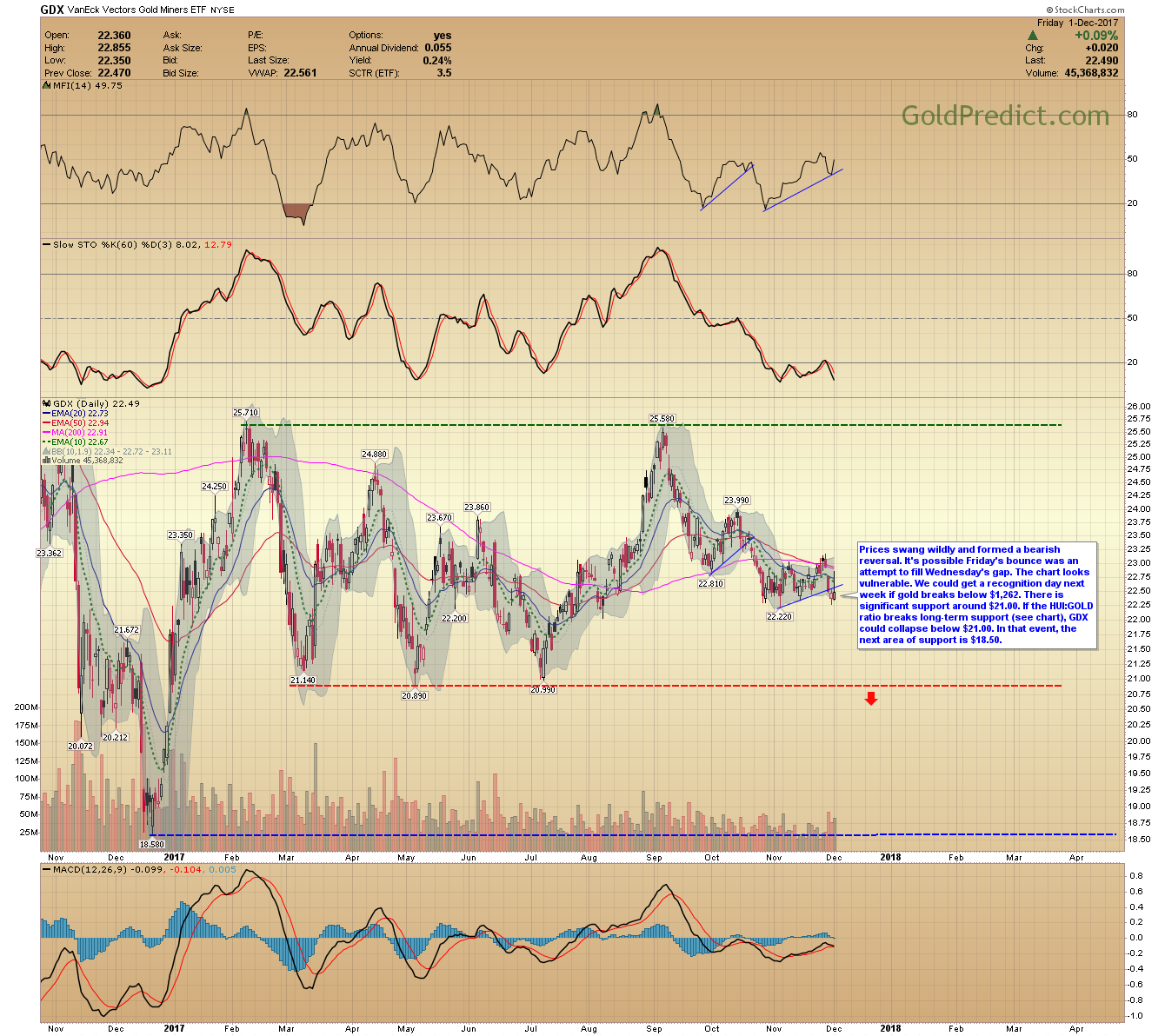 -HUI:GOLD RATIO- The HUI:GOLD ratio is hovering above critical support. A sharp breakdown below 0.1418 would generate additional weakness in miners. 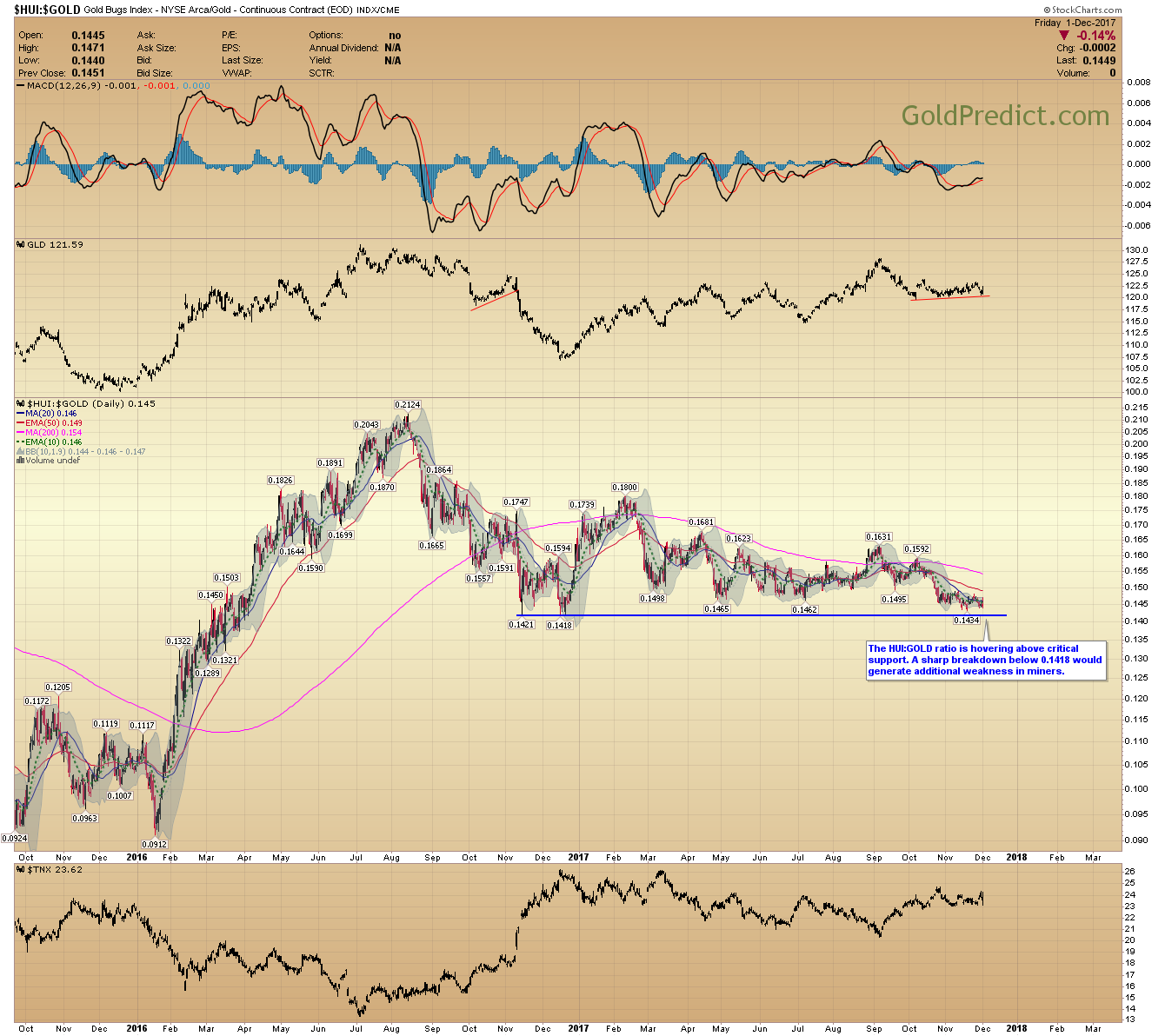 -GDXJ- Juniors reversed after filling Wednesday’s gap. We could get a recognition day through $31.00 if gold drops below $1,262 next week. 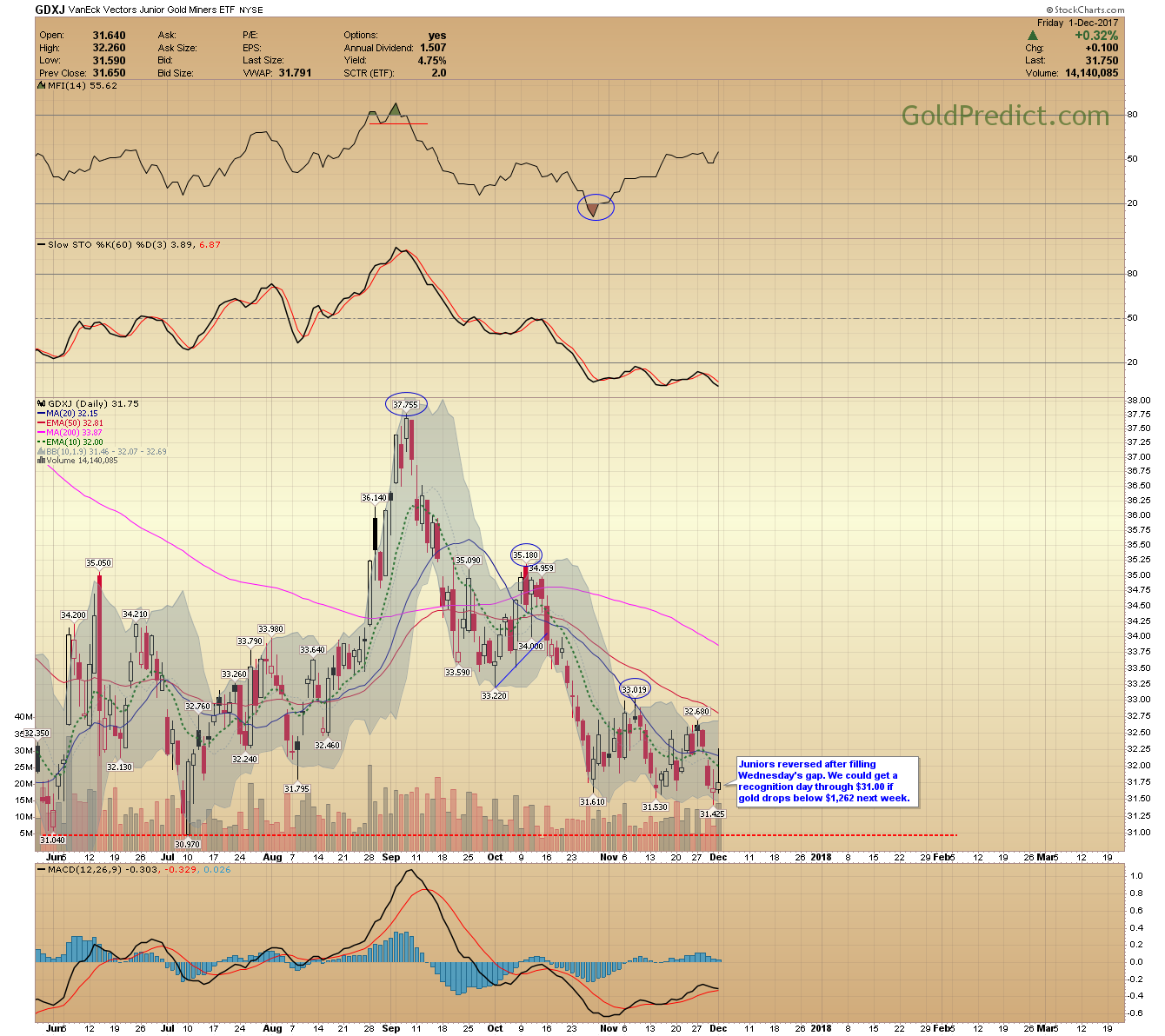 -SPY- Stocks spiked below the 10-day EMA but quickly reversed. I think prices could trend higher through December. However, investors may take profits in January and reallocate into undervalued assets, perhaps commodities. 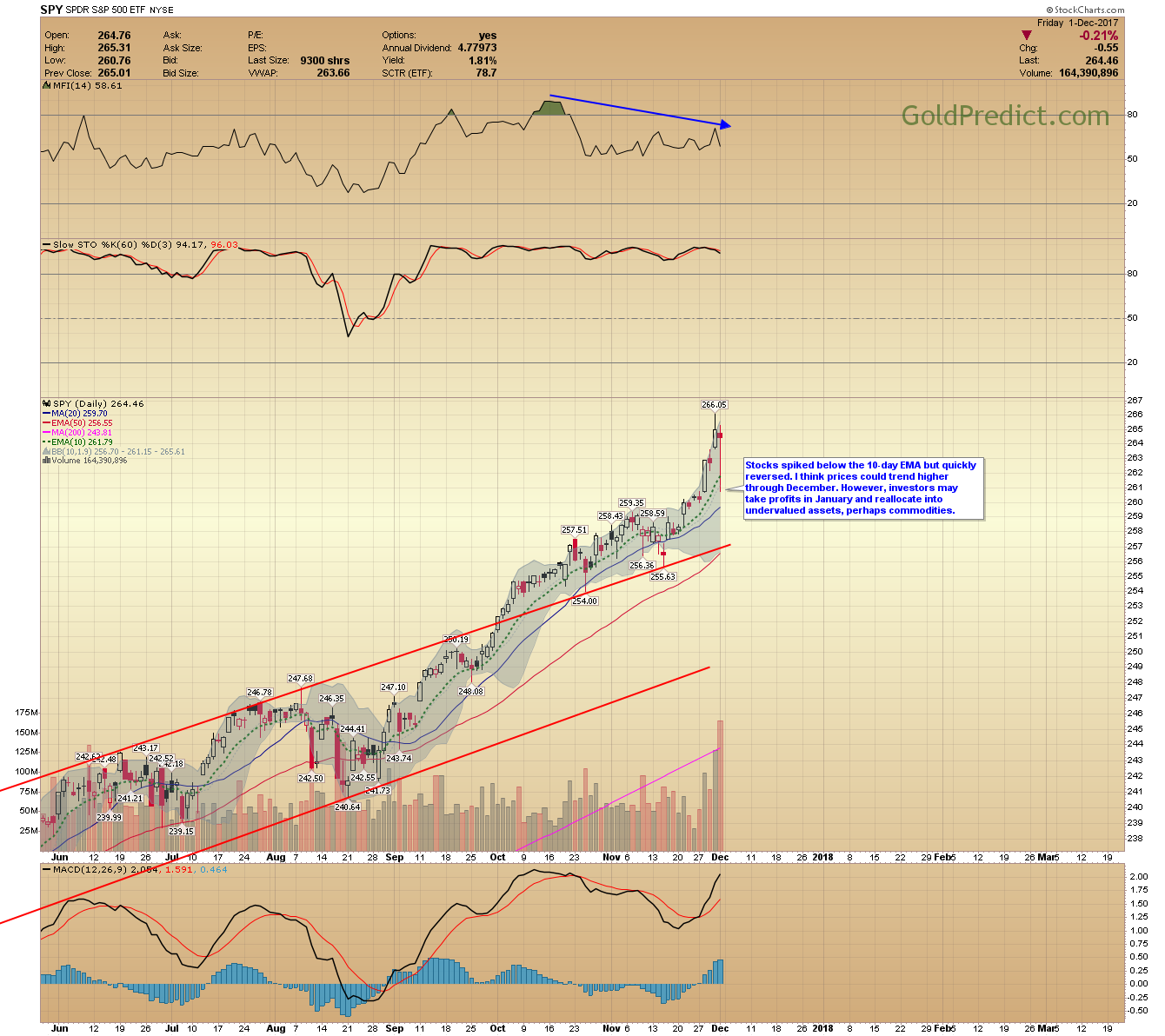 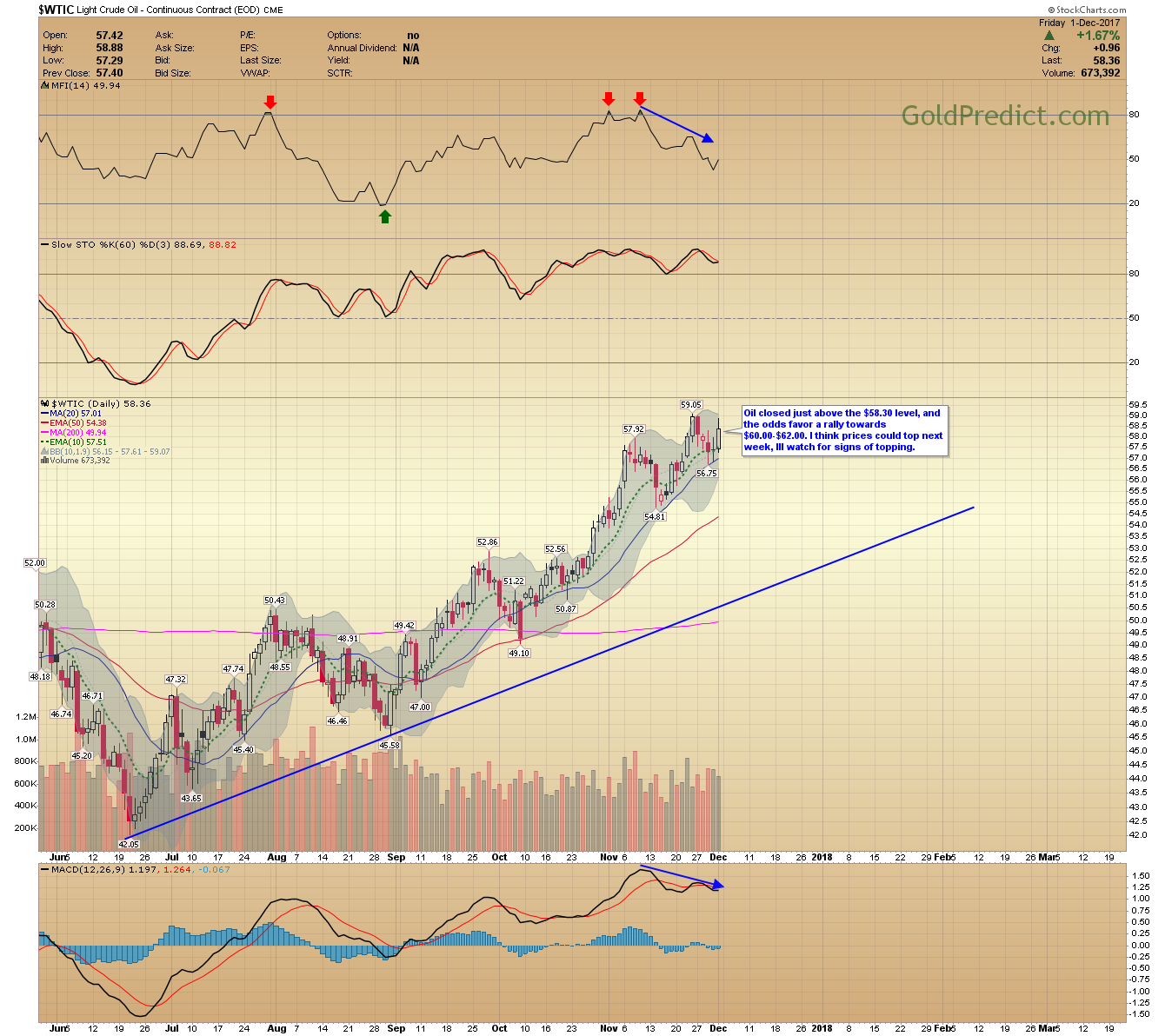 -ERX- Prices closed above the gap, and we could see new highs if oil tests $60.00-$62.00. I may consider buying ERY (triple short energy) if oil provides evidence of topping. 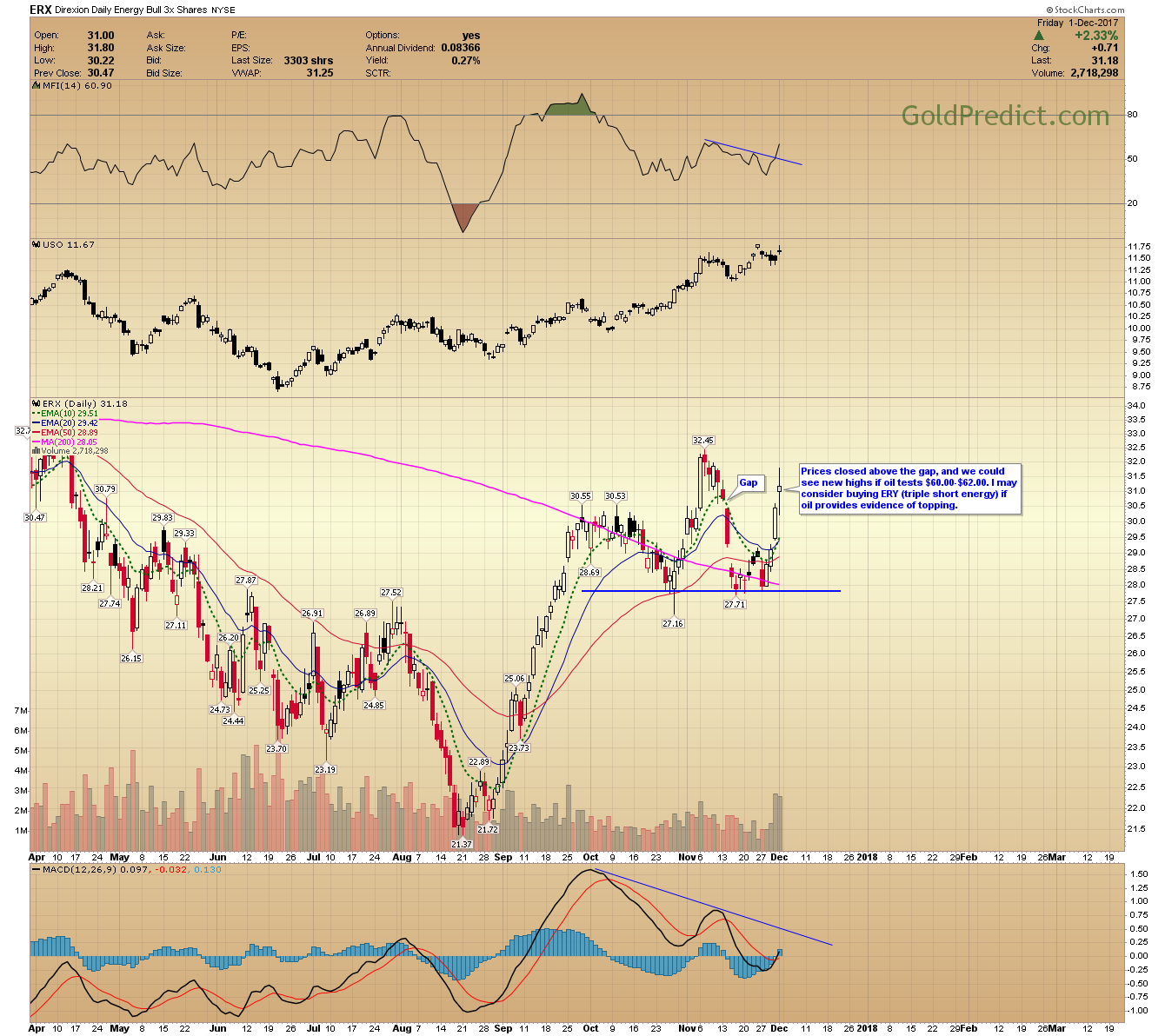 The bears have the advantage going into next week. Pushing gold below $1,267 and then $1,260 could trigger a selling event. I don’t see enough to short metals, but I may consider shorting oil if prices top next week.

This article was published Posted on December 2, 2017 in Categories Weekend Newsletters