The dollar should rally and peak around the time of the March 21st Fed meeting. However, prices reversed at the 50-day EMA and are exhibiting the initial signs of a top. It could turn out to be nothing, but if the dollar peaked, then gold may have put in a premature bottom. Next weeks prices action will support or reject.

Gold looks good, but I’m more excited about the potential in silver. The lengthy consolidation should end in an explosive move higher (see the big picture chart).

I think we are approaching significant lows in metals and miners. Long-term investors may consider adding to their physical (core) precious metal holdings. With each day the short-term landscape will become a little more clear. When the time comes, I’ll change the color codes and release my entry strategy for medium-term trading positions.

-US DOLLAR- Prices reached the lower aspect of the target range and completed steps one and two in establishing a top. Prices typically peak much closer to the Fed meeting so I’d be surprised if they topped already. Nevertheless, If prices continue to decline below the 10-day EMA (confirm a top), I’ll have to consider a premature low in gold earnestly. Ideally, the dollar will resume its interim rebound next week. 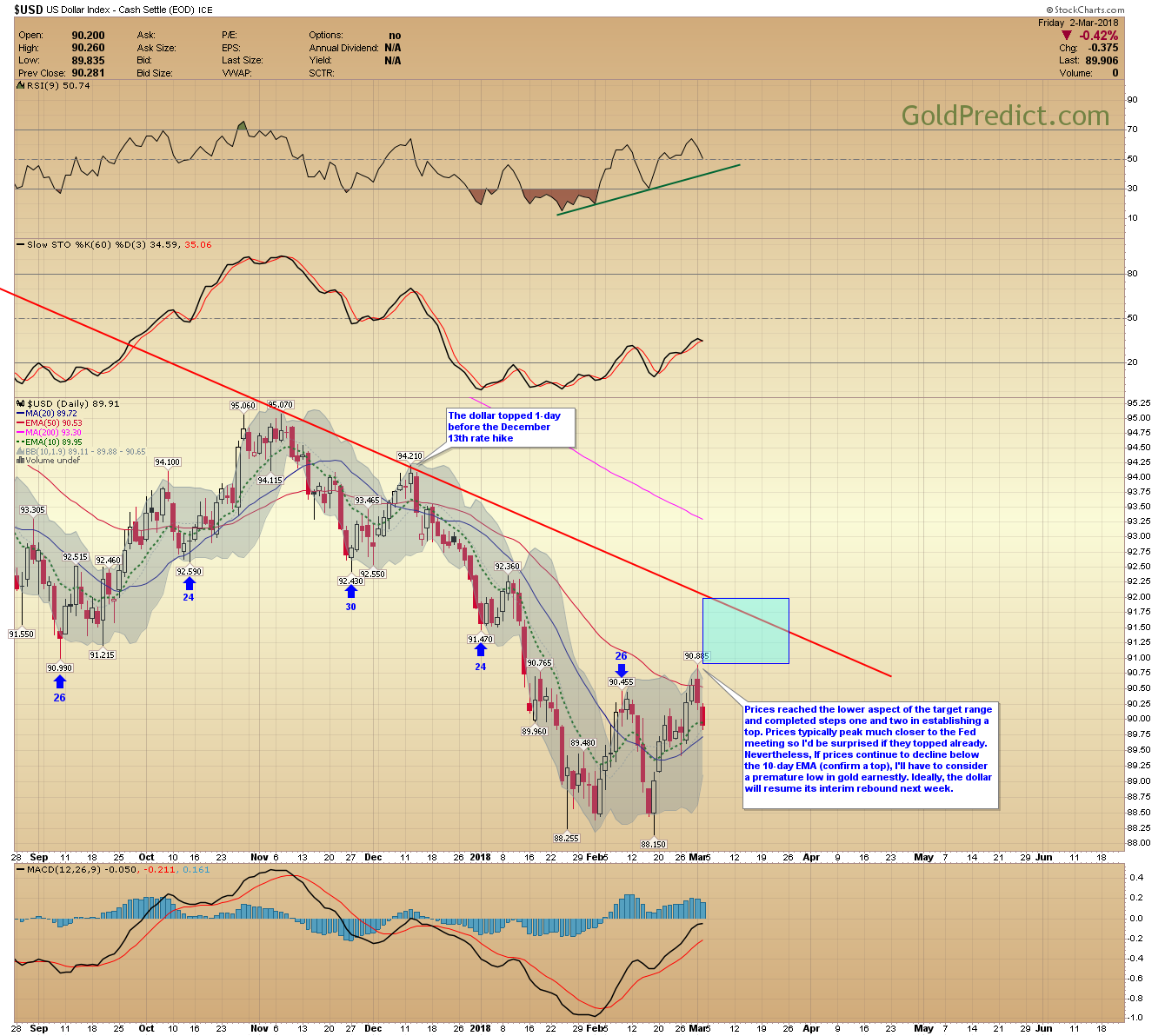 -GOLD BIG PICTURE REVIEW- The 4-year basing patterns are similar in depth and duration. Volume is expanding, and prices are approaching a bull market breakout. 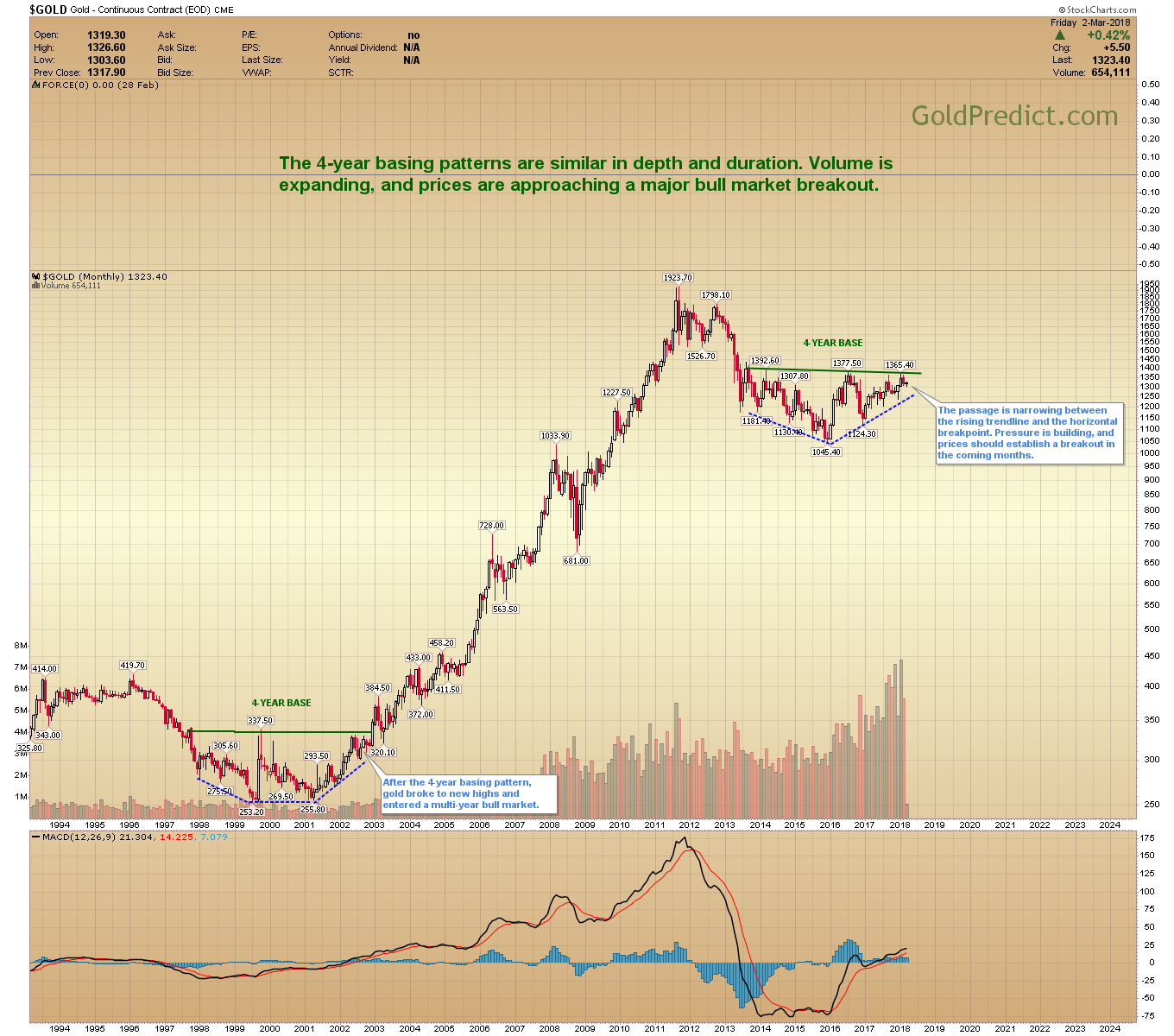 -GOLD DAILY- Prices formed a swing low (step one in a low) but failed to close above the 10-day EMA (step two). Gold could bounce a little higher, but it would have to close above the $1,342.90 pivot to firmly disrupt the potential for a more profound decline into the March 21st Fed meeting. 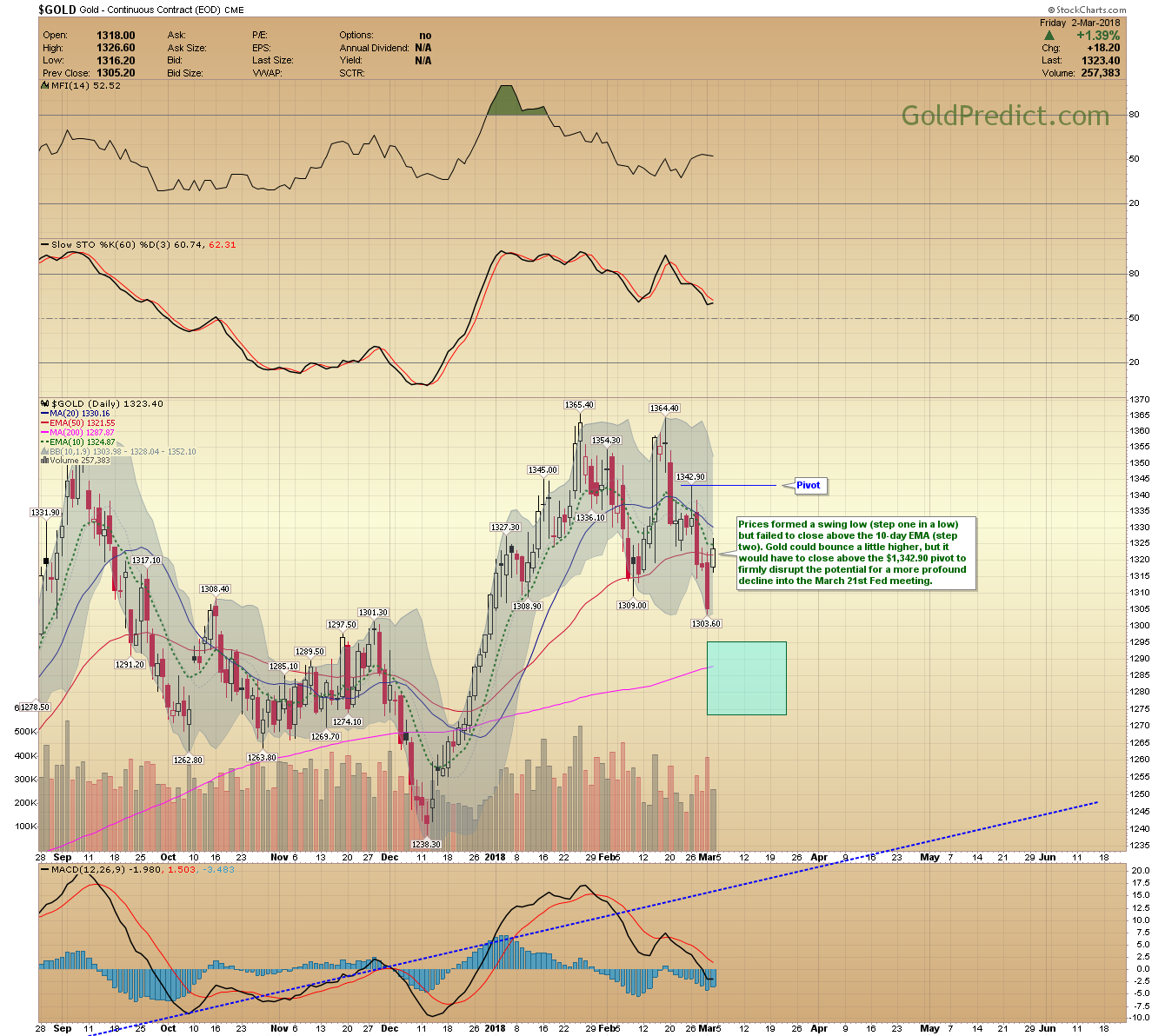 -SILVER BIG PICTURE REVIEW- Silver tends to explode higher and then consolidate. The 12-Month compression zone between July 2002 and July 2003 is comparable to the current pattern in depth and duration. Prices are building energy to launch above the 200-week MA. If the sequence repeats, prices should breakout in April/May and potentially reach $26.00+ by year-end. 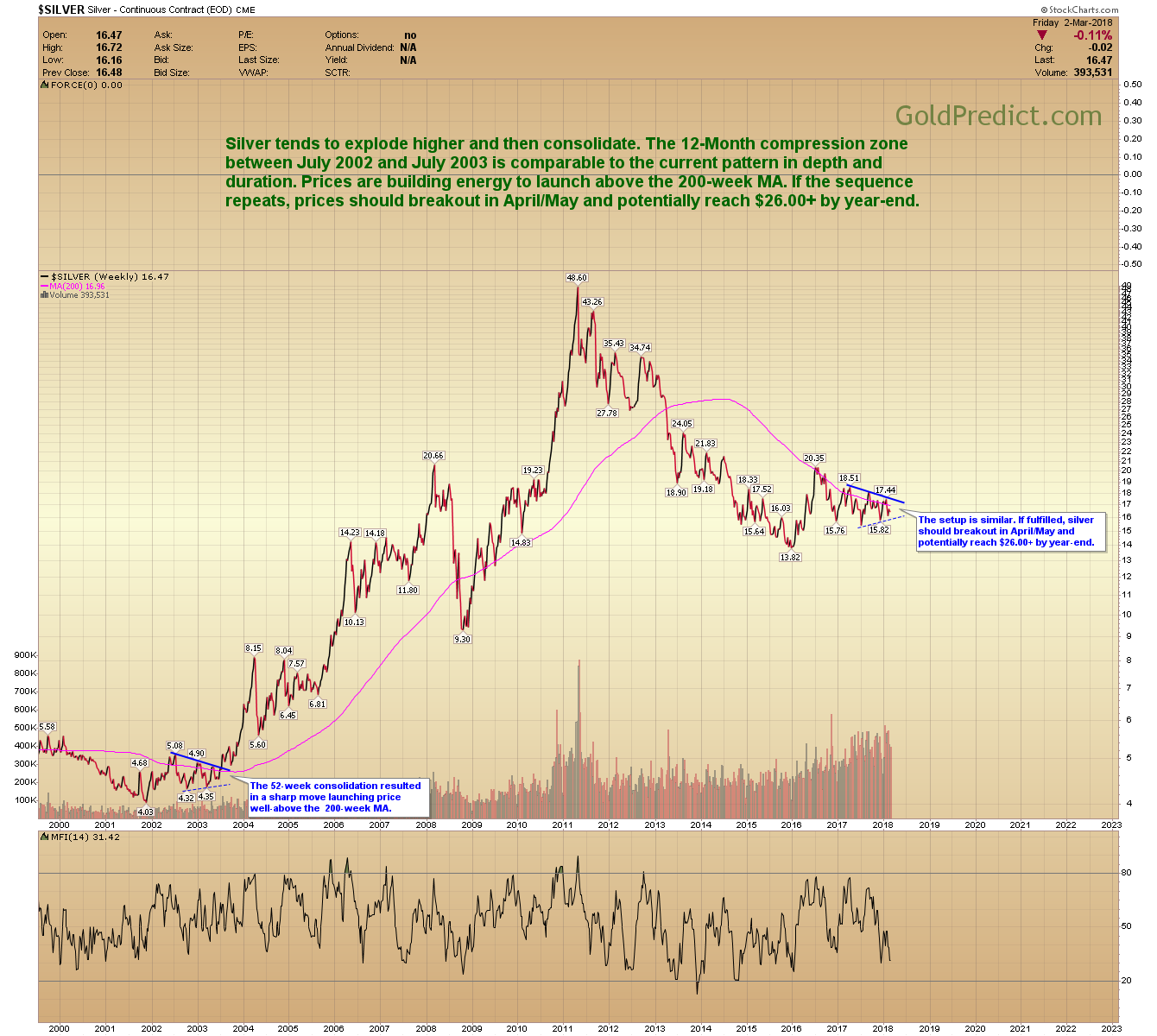 -SILVER DAILY- Prices could decline a bit further as we approach the March 21st Fed meeting, but they should hold above $15.50. However, the downside may be limited if dollar prices peaked prematurely (we should know sometime next week). If the big picture interpretation is correct, silver could be setting up for an explosive 2018. 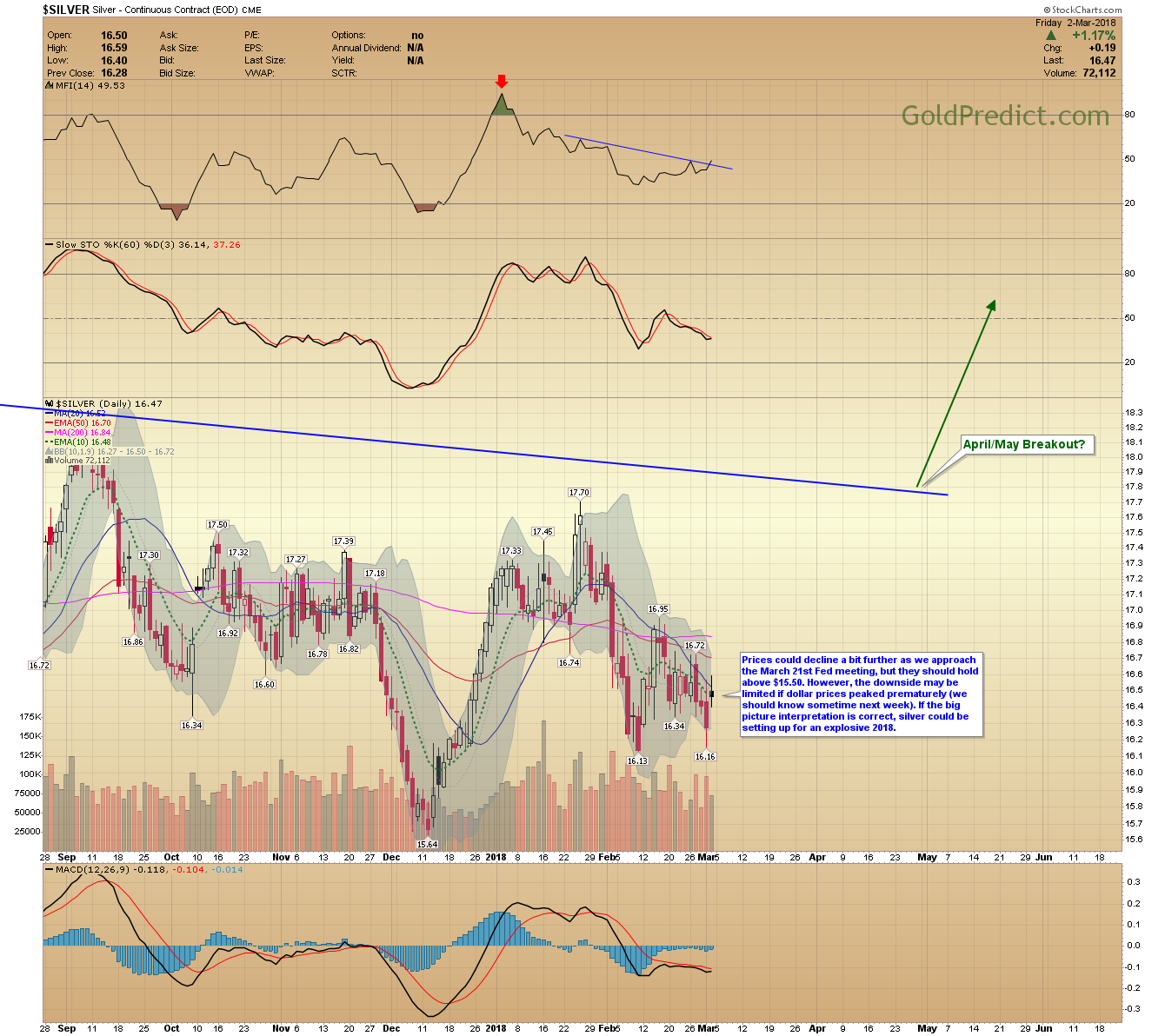 -GDX- Prices were unable to follow-through after Thursday’s bullish reversal. Miners would have to close consecutively above the pivot high ($23.15) to support the potential for a premature low. Our cycle work submits a bottom closer to the March 21st Fed meeting. 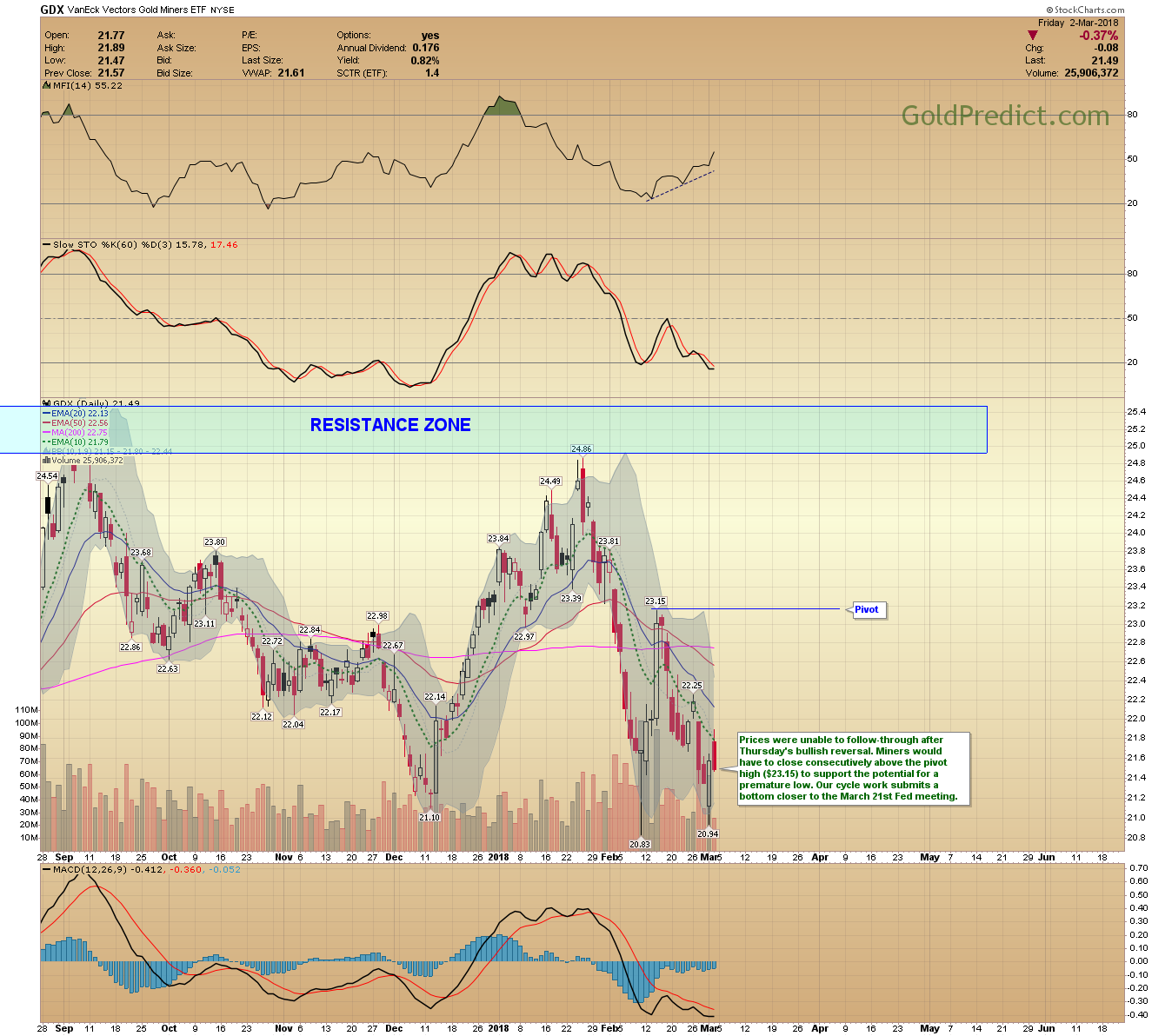 -GDXJ- Prices were unable to follow-through after Thursday’s bullish reversal. Juniors would have to close consecutively above the pivot high ($33.69) to support the potential for a premature low. Our cycle work submits a bottom closer to the March 21st Fed meeting. 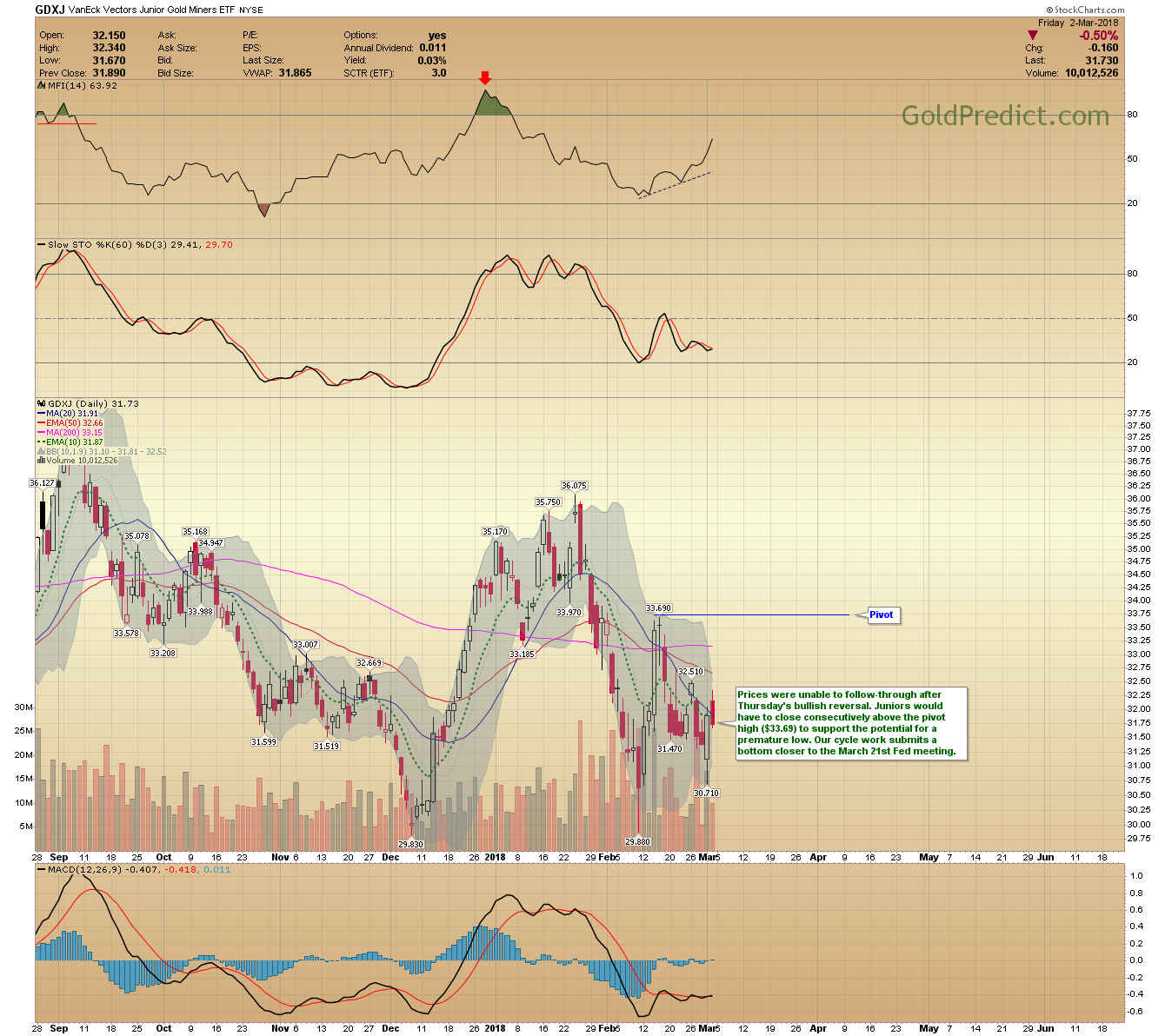 -JNUG- I’ll look to enter initial positions when a low seems likely. Next 1-3 weeks. If the next rally in gold breaks above $1377, the subsequent rally in miners should be exemplary. 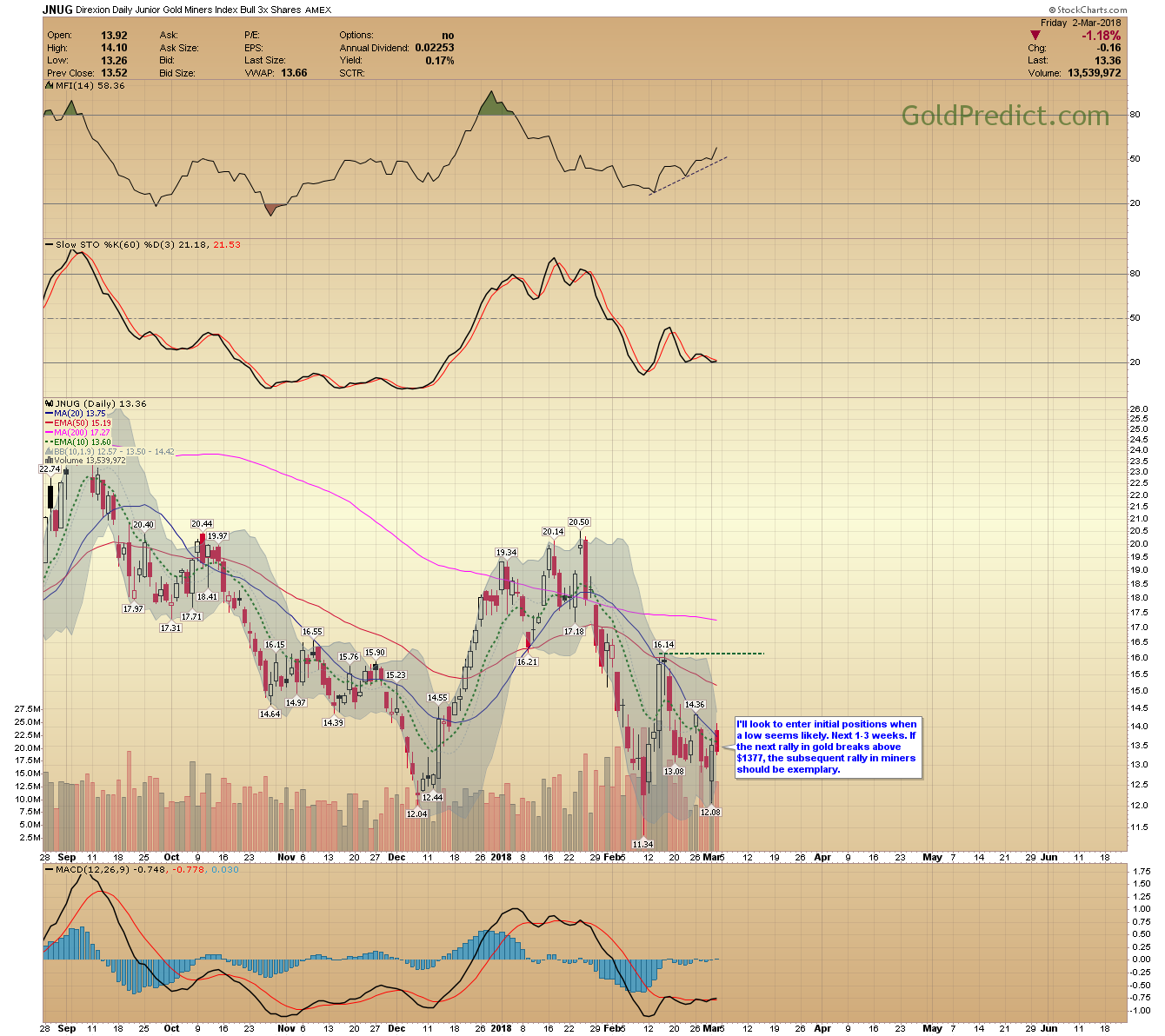 -USLV- I’ll look to enter initial positions when a low seems likely. Next 1-3 weeks. If silver matches our expectations, USLV should rally significantly in the coming months. 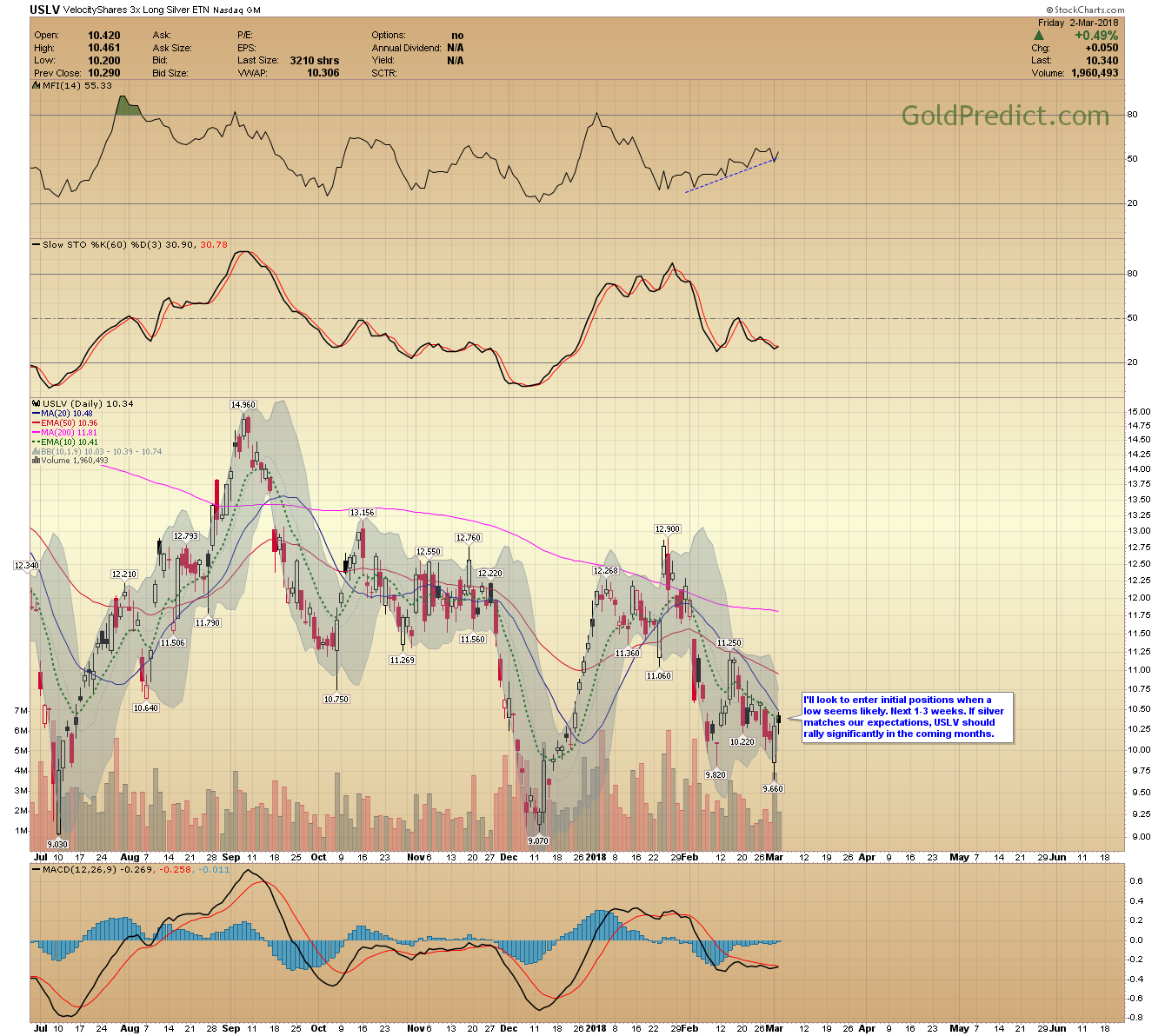 -SPY- Stocks held the 266 low, and a retest of the February low is unconfirmed. Closing back above 272 could generate more upside. Increased volatility is making the short-term swings difficult to forecast.

The business cycle is mature but not dead. We should see a rotation into energy and commodity stocks as inflation picks up. While the economy rolls over into a recession (late 2018 – early 2019), we should see consumer staples begin to outperform discretionary type stocks. That shift will help identify a top in the stock market. I’ll also watch for a flattening or inverted yield curve. 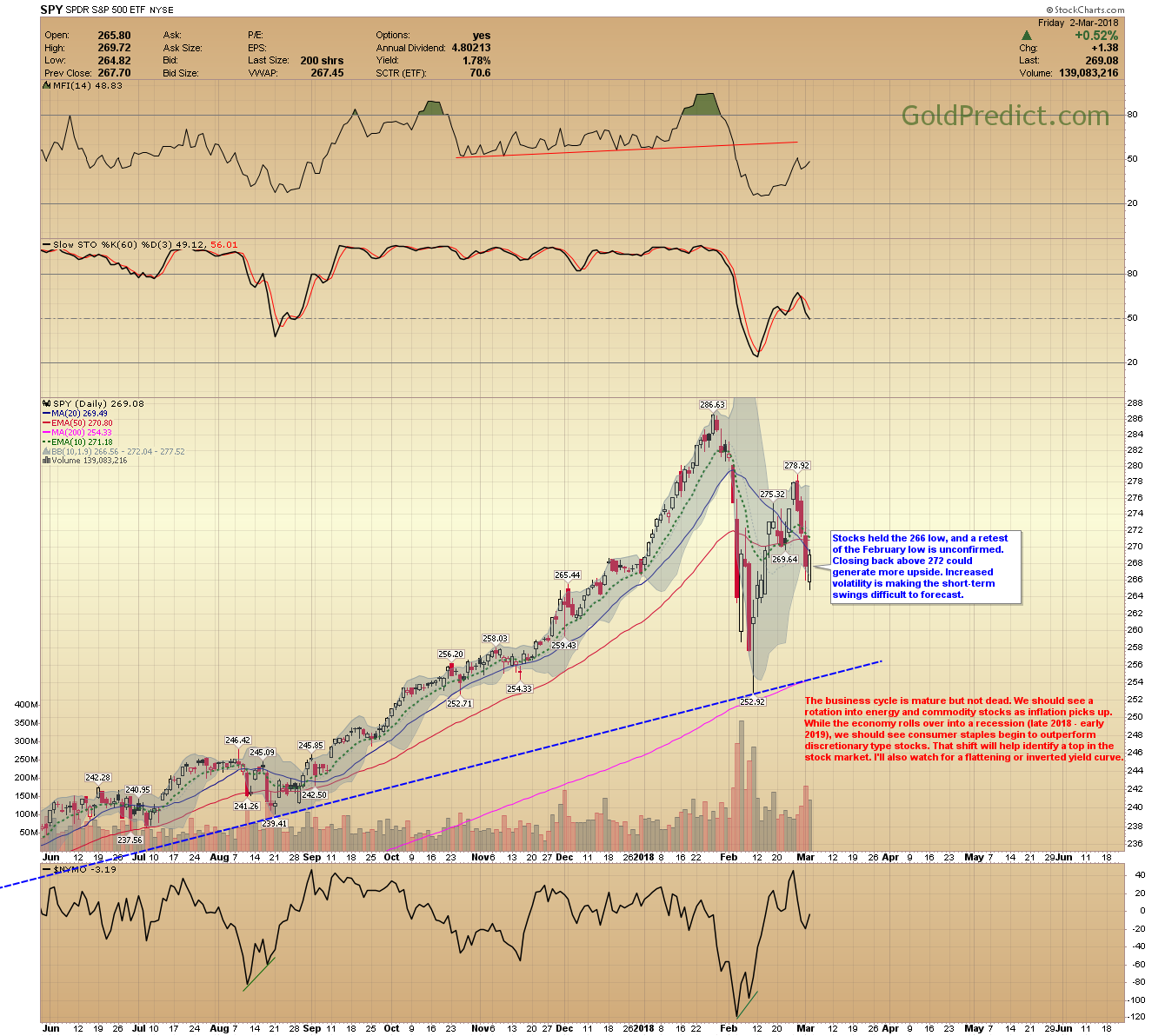 -WTIC- Prices made a lower high at $64.24, and the trend is attempting to maintain the 50-day EMA. We must see follow-through below $60.00 to support our March target zone. Failing to break the $58.20 low in the coming week(s) could produce a retest of the January high. 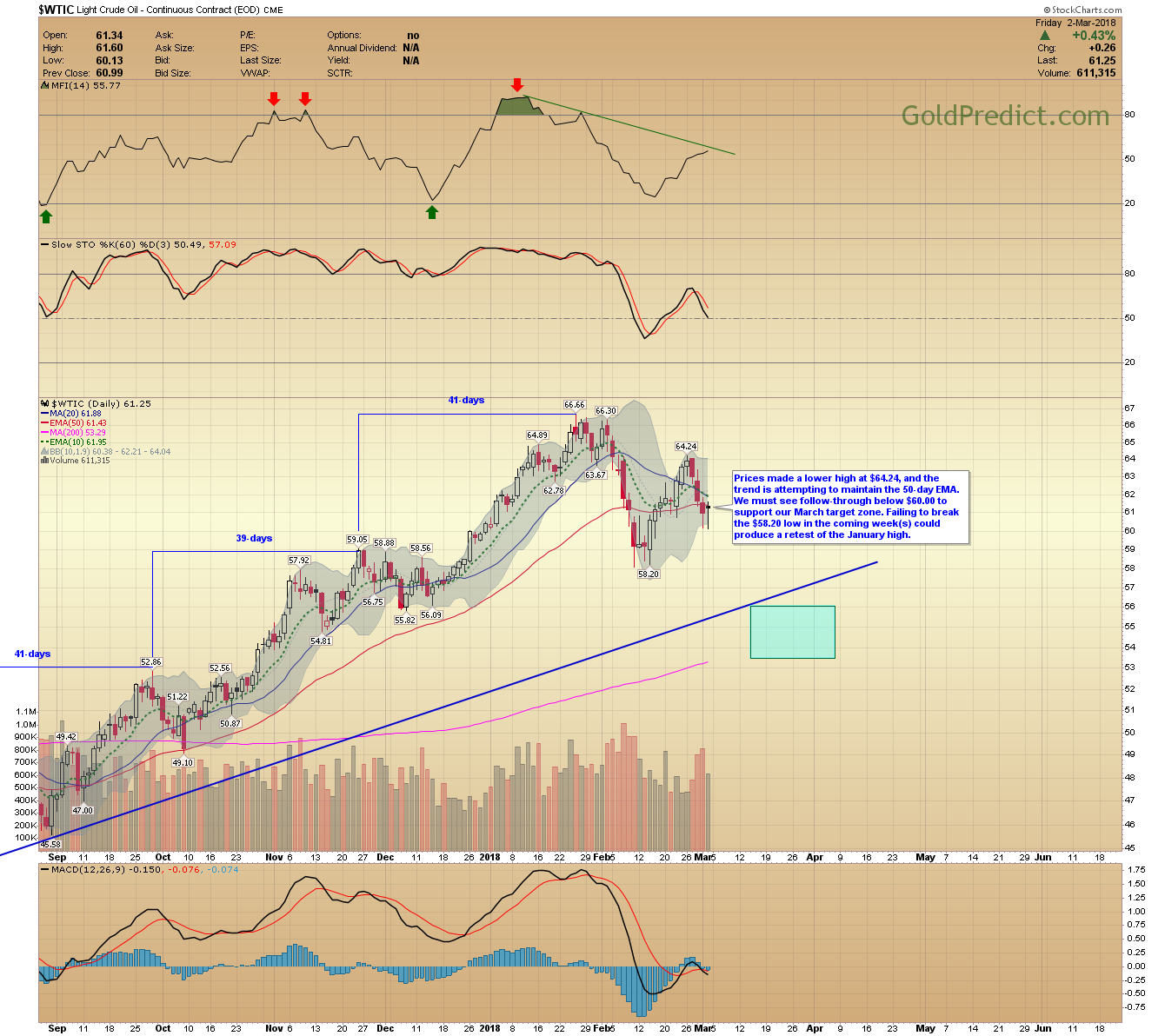 Bitcoin was unable to follow-through to the downside. Prices have risen above the trendline and are testing the February 19th high ($11,788). Consecutive closes above that level could induce a bounce to $14,000 – $15,000. Failing to recapture $12,000 will mark further consolidation or the start of another decline. 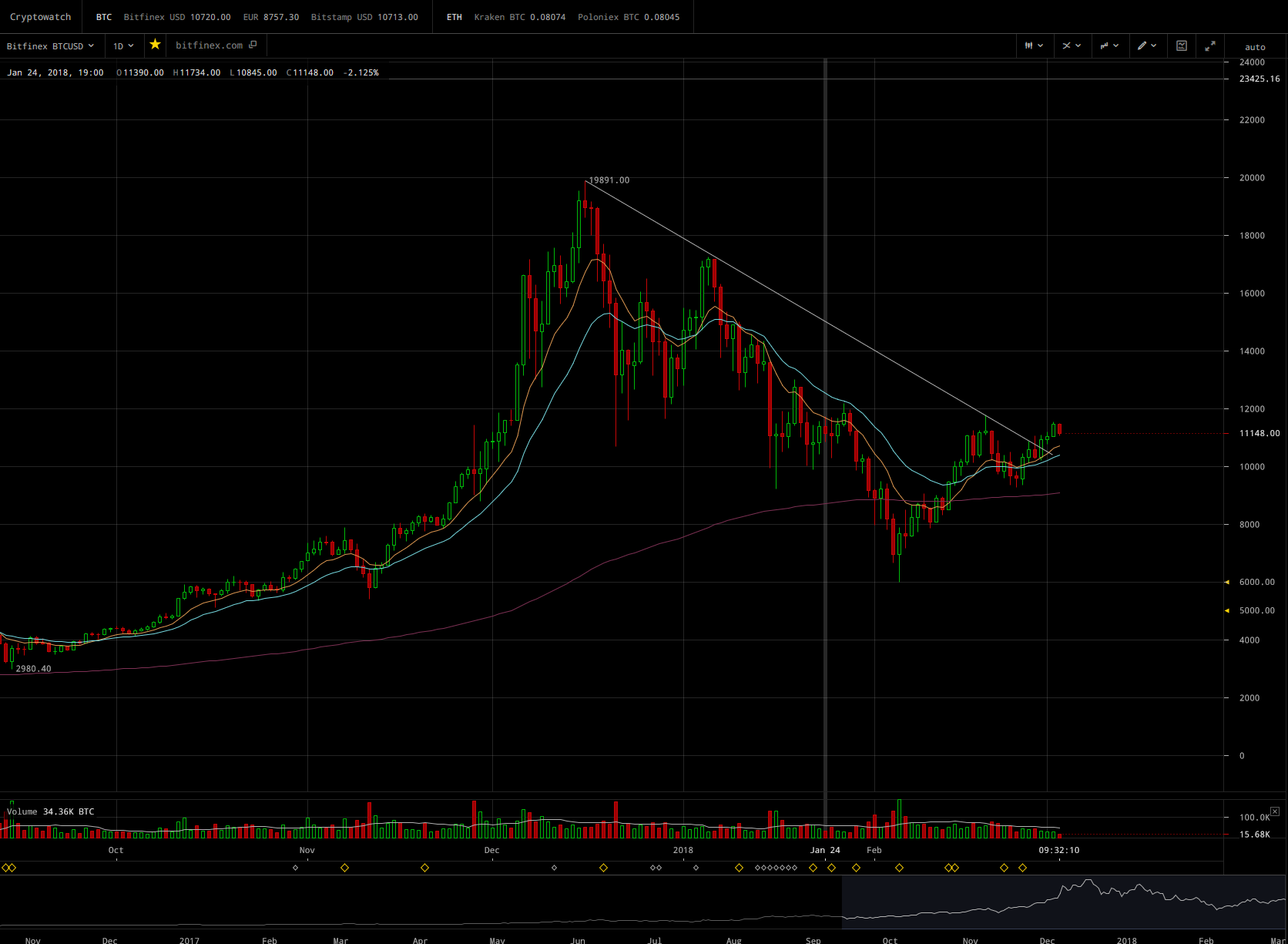 This article was published Posted on March 4, 2018 in Categories Weekend Newsletters