Gold has formed several indication candles, and this may result in a sharp move. The bulls and bears are fighting for control. It’s unclear who will win the short-term battle. The dollar will determine the victor.

Silver exploded higher from the range and closed above $17.00. If this was an actual breakout, then we should see a pause and then additional upside. Closing back below $17.00 would suggest a pullback. The COT setup compelled me to be overweight silver and USLV.

Miners are showing moderate relative strength, and another surge higher seems plausible. I’ve been waiting for a change in leadership…silver and miners may finally be perking up.

-US DOLLAR- The dollar formed a swing low and closed above the 10-day EMA increasing the potential for a short-term bounce. If installed, prices would likely find resistance between the upper boundary and the 50-day EMA. Breaking downward from the triangle should correlate with a breakout in gold above $1377.50. 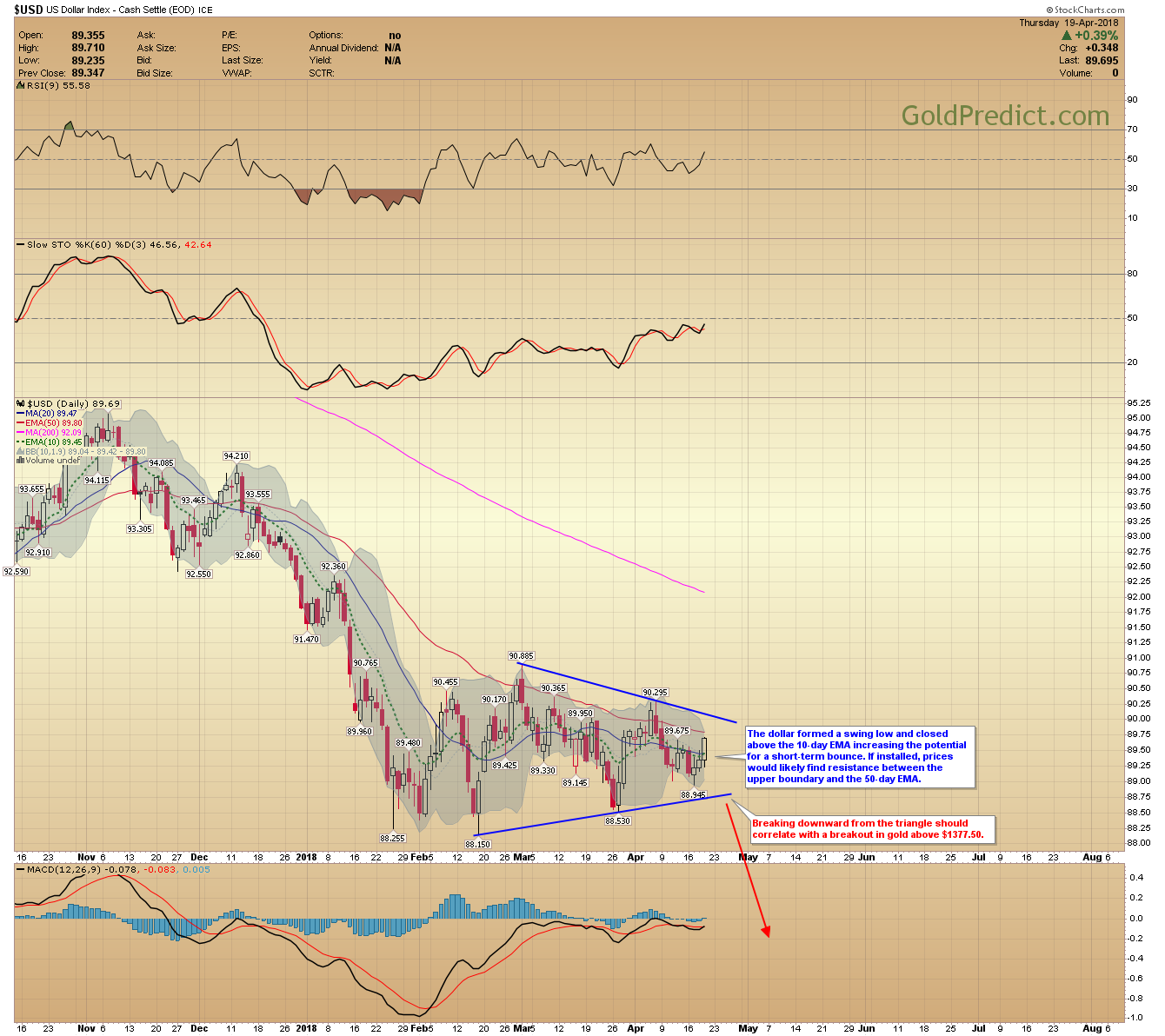 -GOLD- Prices formed four consecutive indecision candles. Energy appears to be building, and a sharp move may release. Which way gold breaks likely depends on the dollar. If the dollar rallies and gold corrects…key support remains at $1,334 and $1,322. 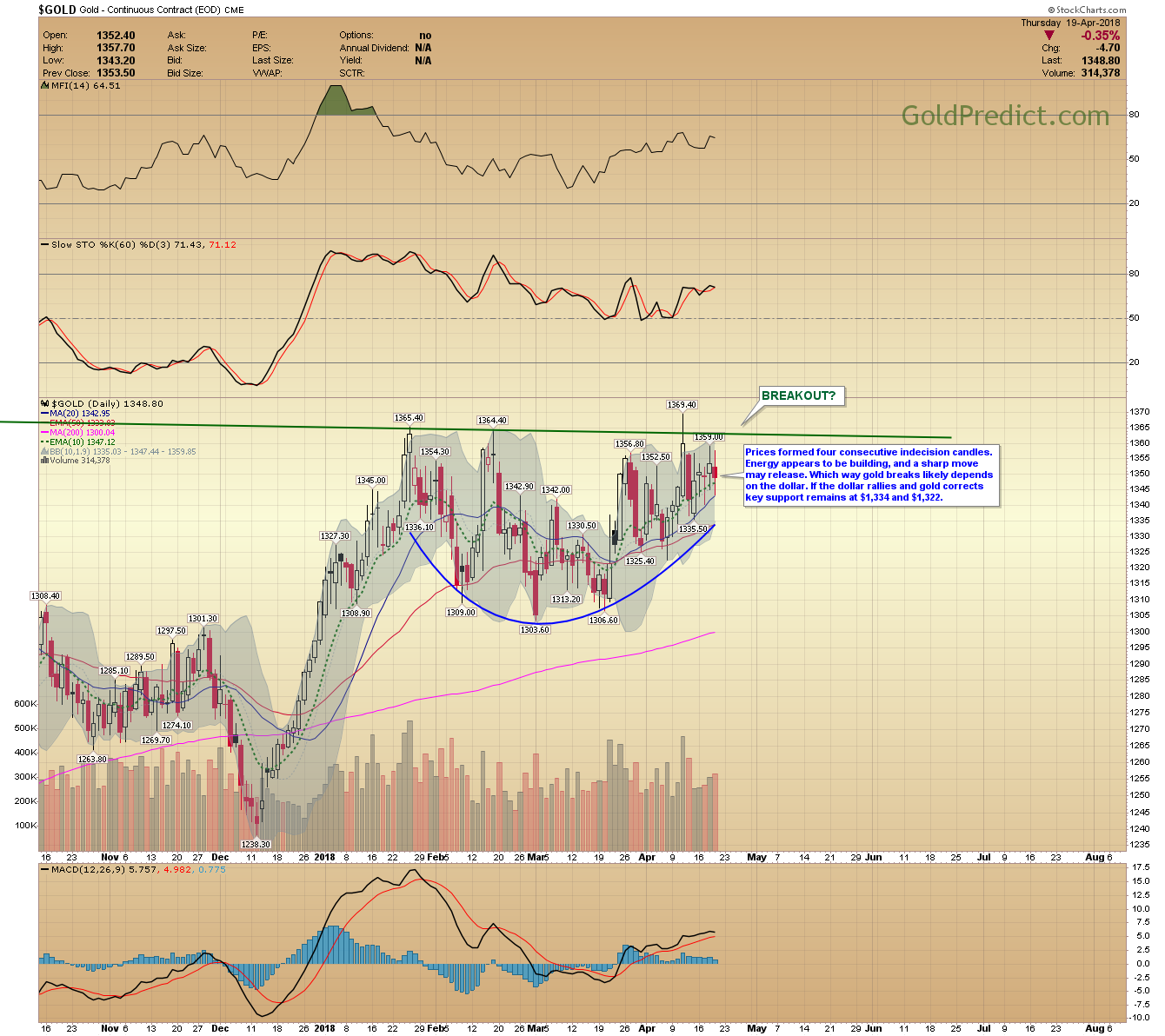 -SILVER- Prices broke sharply higher yesterday on abundant volume. If this was a legitimate breakout, then prices should continue higher after a brief pause. There is considerable resistance between $17.50 and $17.80. Closing back below $17.00 would promote a backtest (throwback) to the $16.80 level. 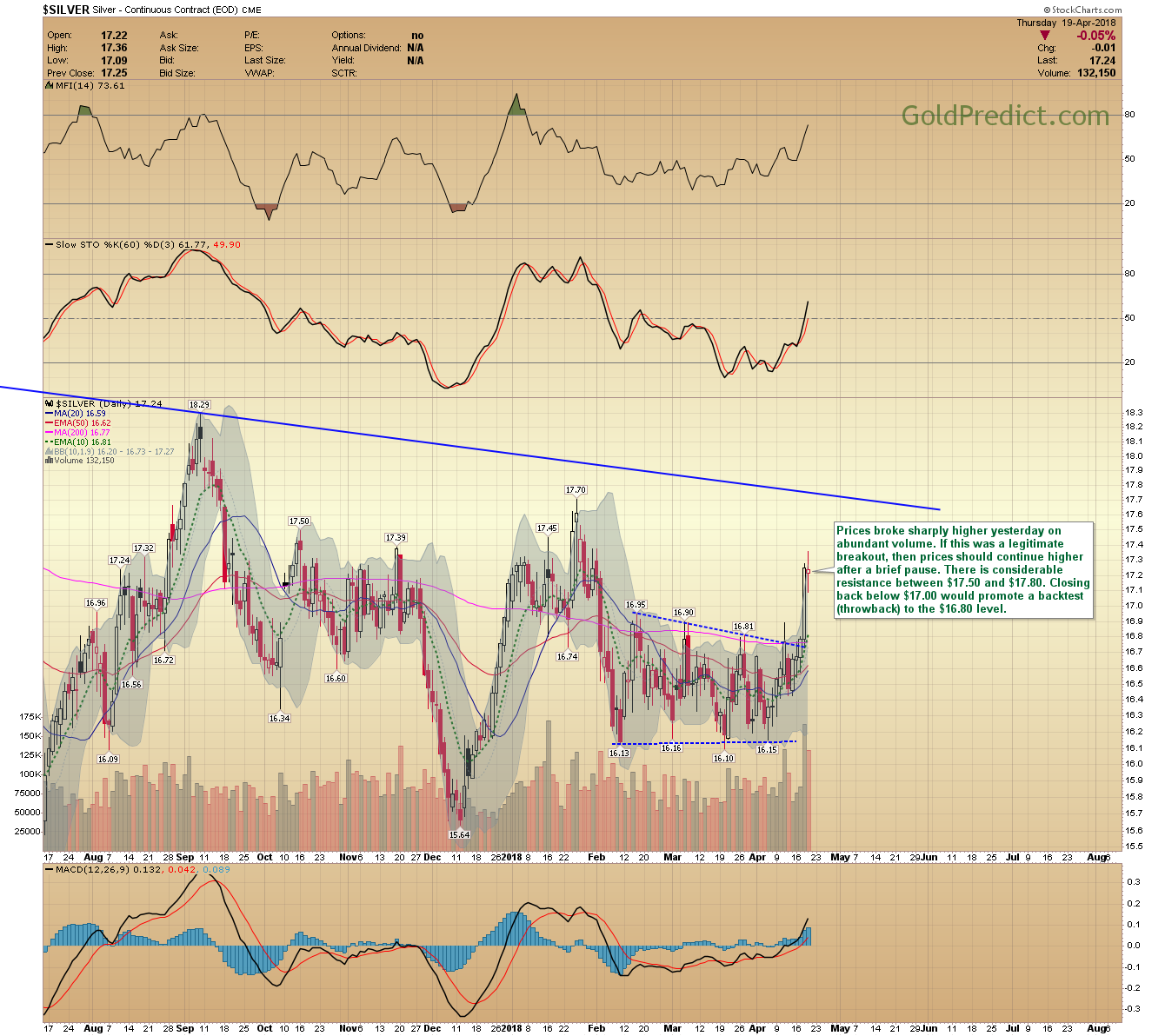 -HUI:GOLD- Despite the hesitation in gold, miners continue to show signs of health. The next level to overcome stands at .1406. Closing above that would provoke a test of the 200-day MA and long-term blue breakout line. 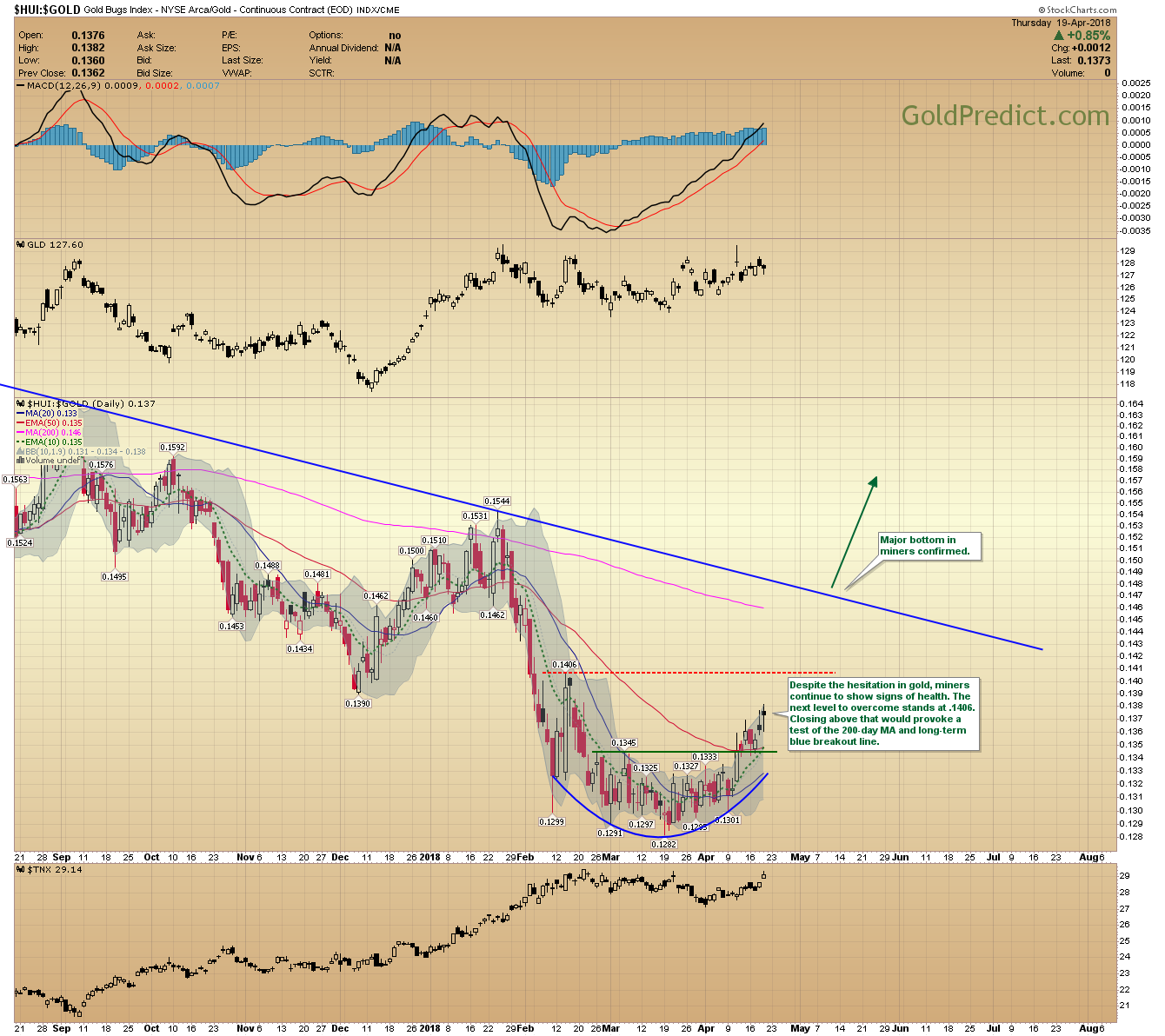 -GDX- Miners are struggling at the February rebound high. The bears are trying to force a pullback, but I’m sensing underlying strength. If correct, then we could see another upleg towards the resistance box once prices close progressively above $23.15. 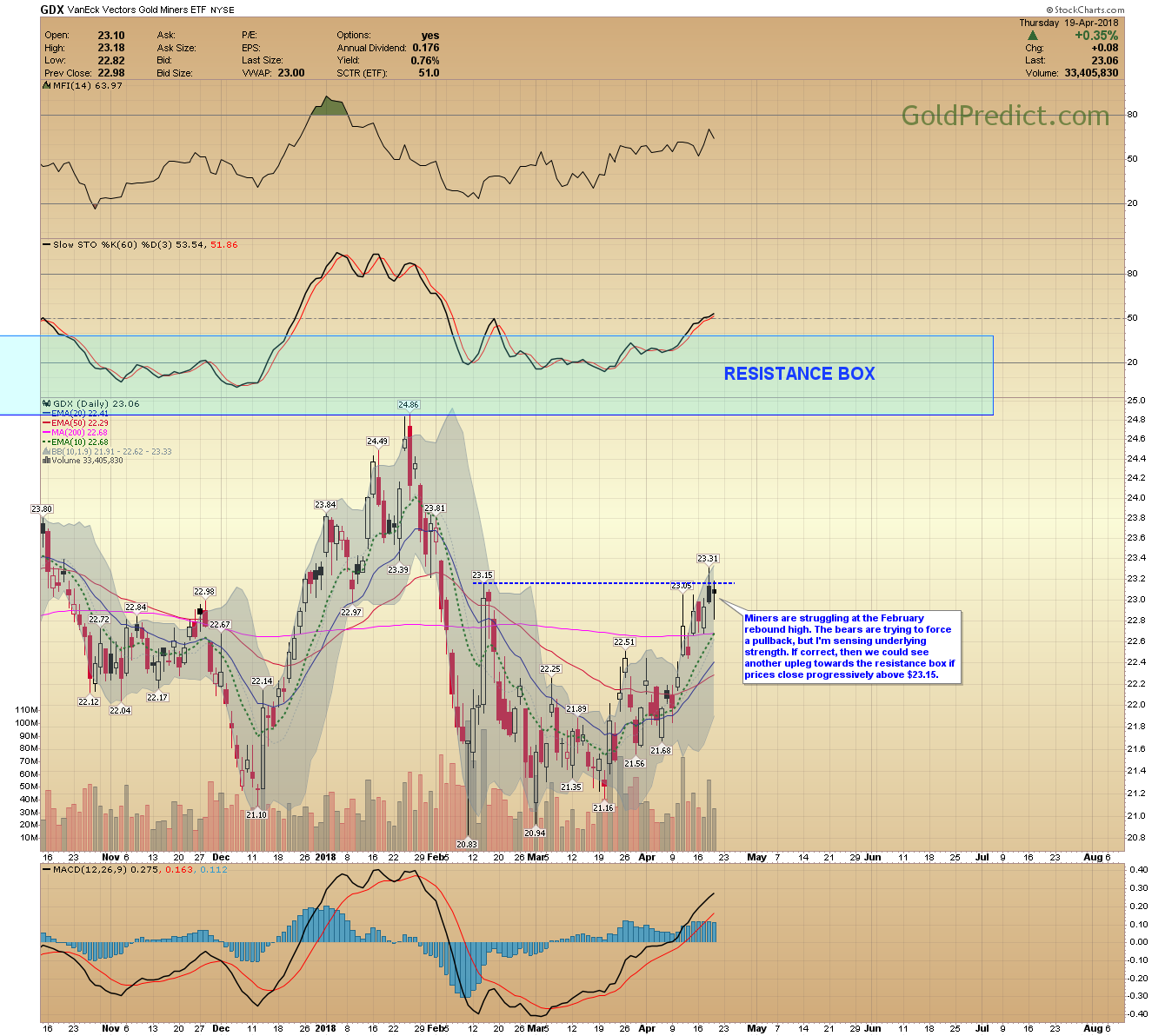 -GDXJ- Juniors formed consecutive Doji candles, and we are at an inflection point. Today’s swings filled Wednesday’s gap, and we could see more upside. Closing back below $33.69 would imply a correction. 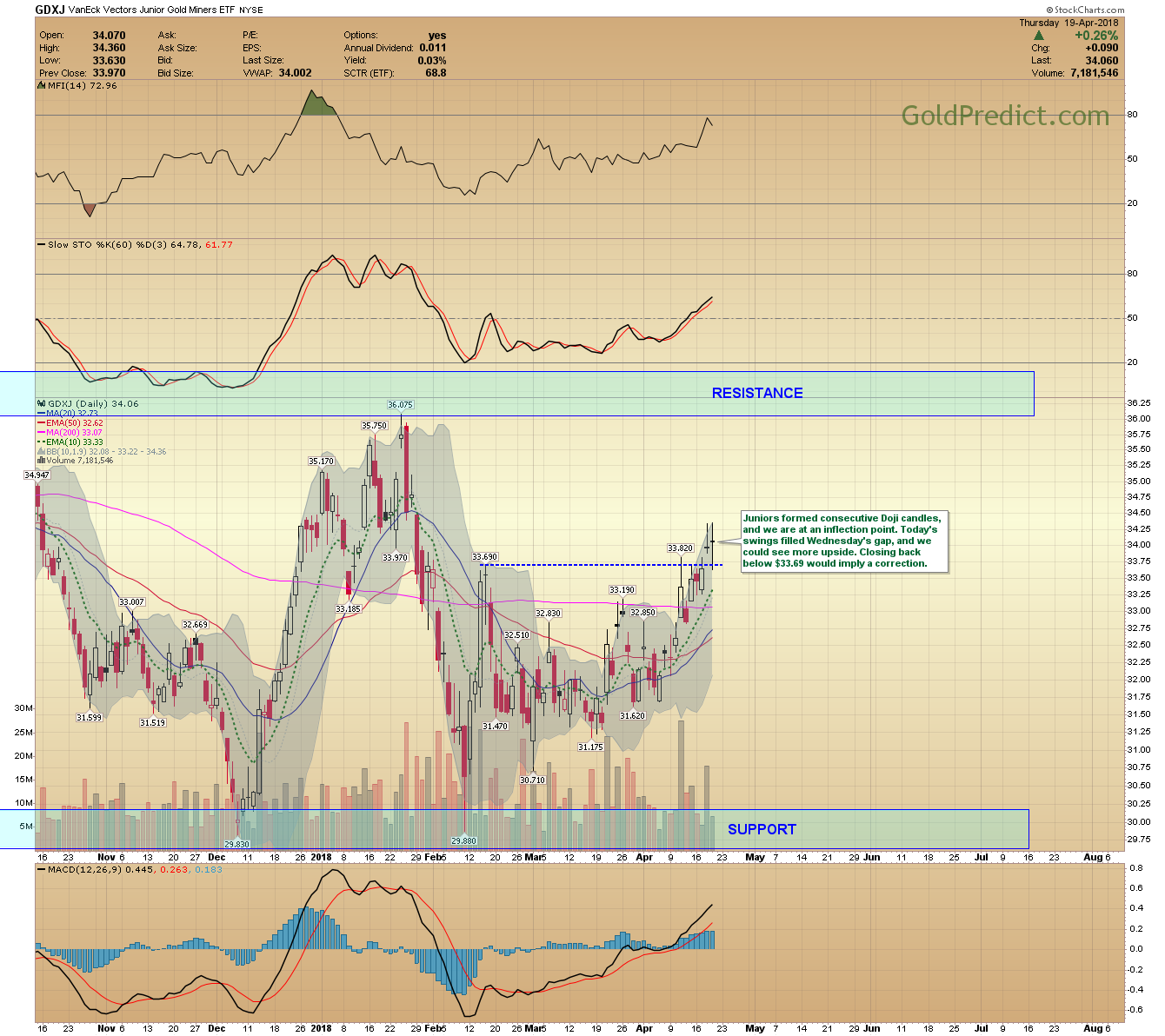 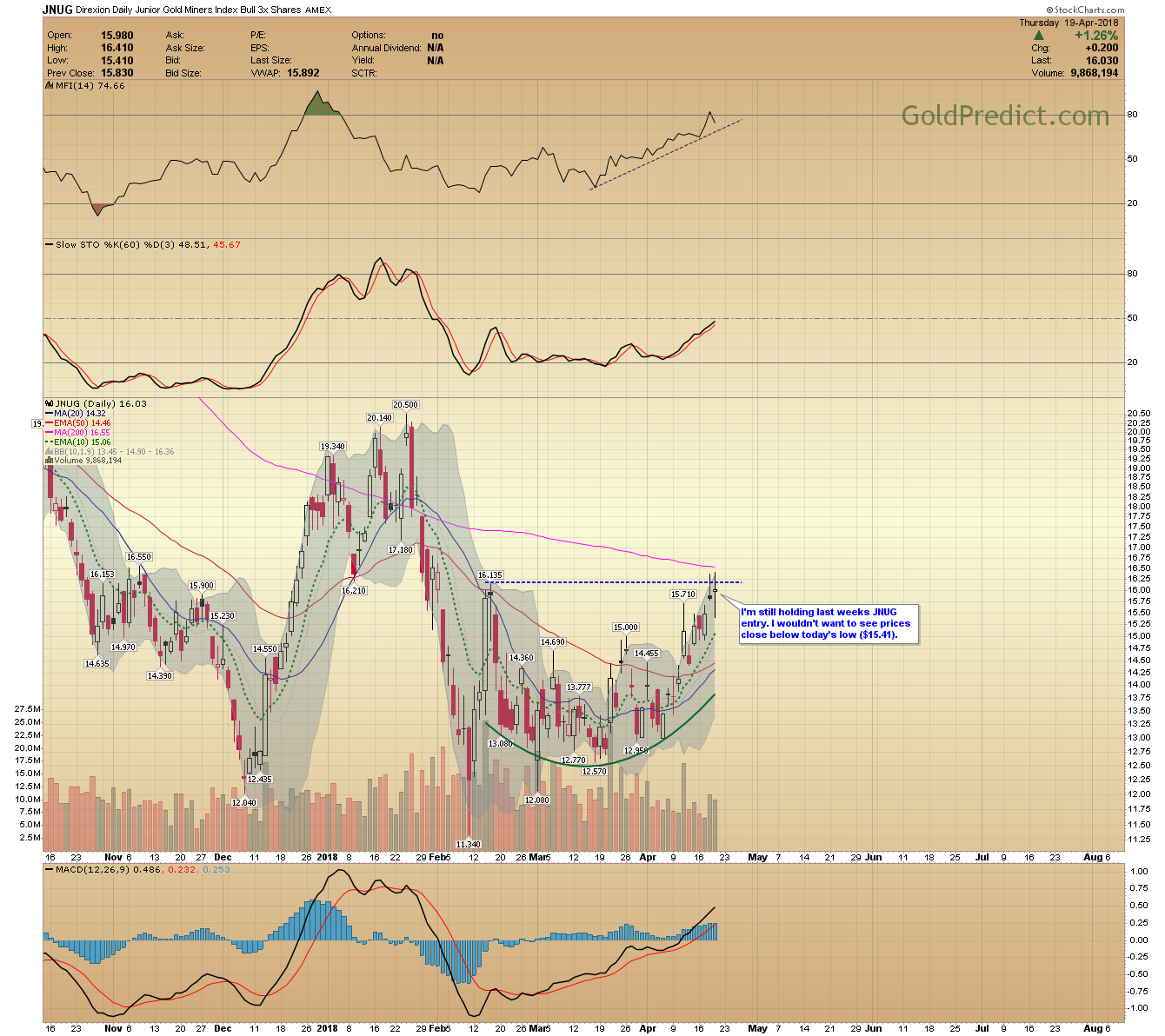 -USLV- I purchased more USLV on Tuesday and prices soared higher the following day. It doesn’t always happen that way, but I’ll take it. A pullback is certainly possible, but the longer-term potential is excellent. Like I’ve been harping – the COT setup is incredibly bullish. I think $26.00 silver is possible by late 2018 or early 2019. Note: The MFI has reached overbought. 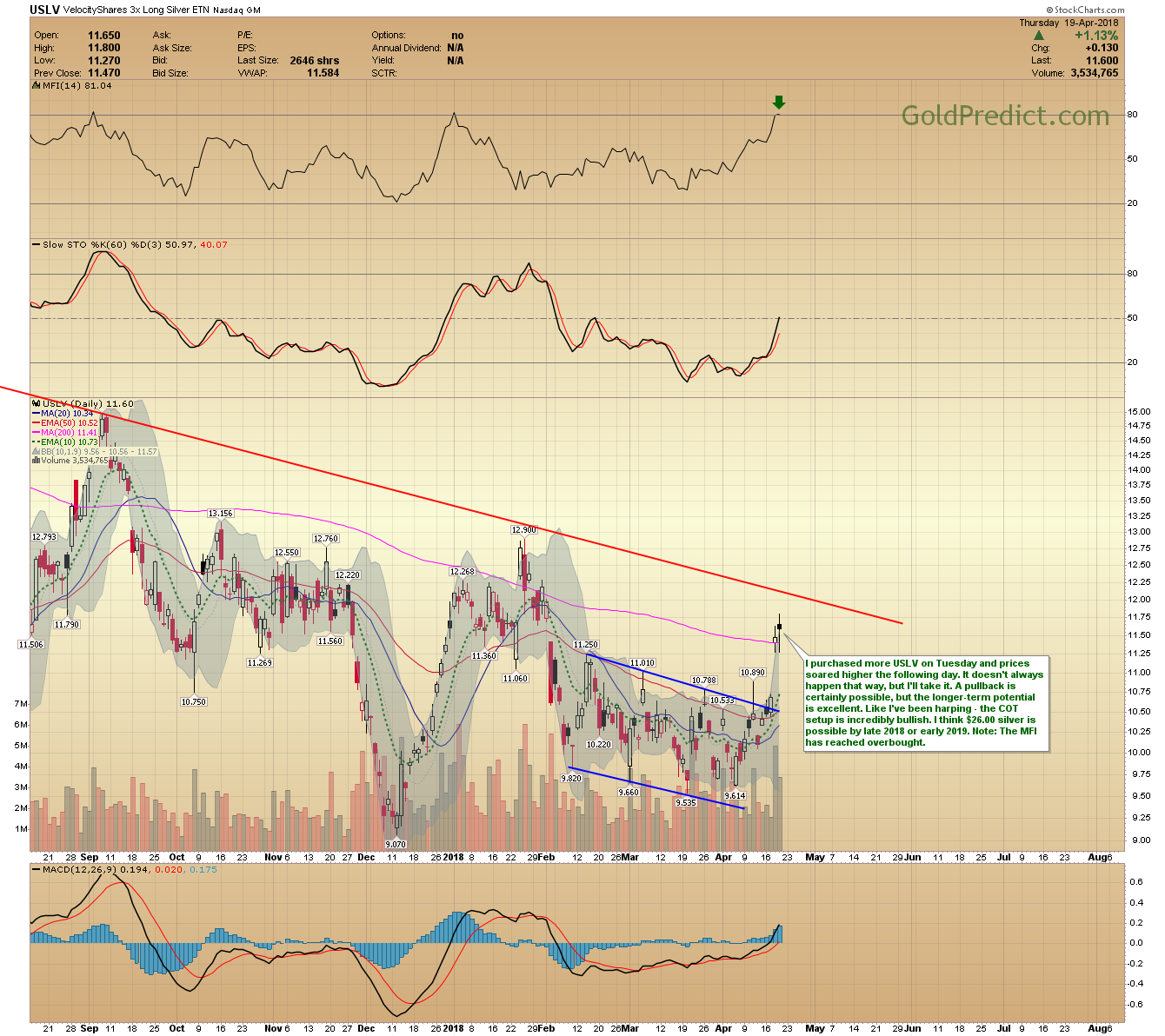 -SPY- Stocks closed the gap at 270 set March 22nd. Volume has been decreasing since April 9th, and there is little conviction behind the recent rally. Closing below 268 would support increased weakness. Otherwise, SPY would have to close above 270.30 to extend this rally. 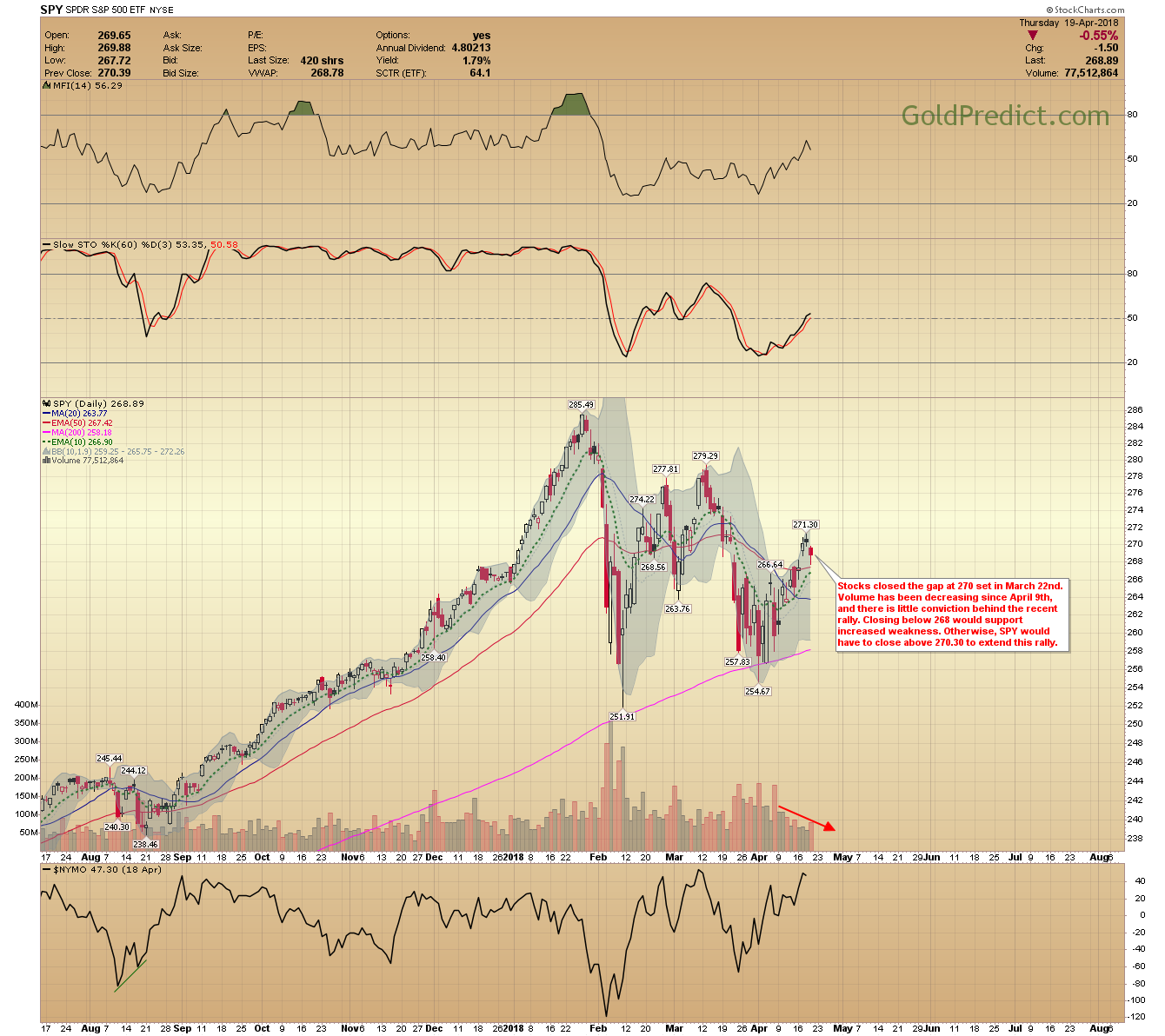 -WTIC- Oil closed above the $67.76 high, and we will likely see this rally stretch into next week. Curiously, prices have shown a tendency to form tops between the 24th – 26th of the month. 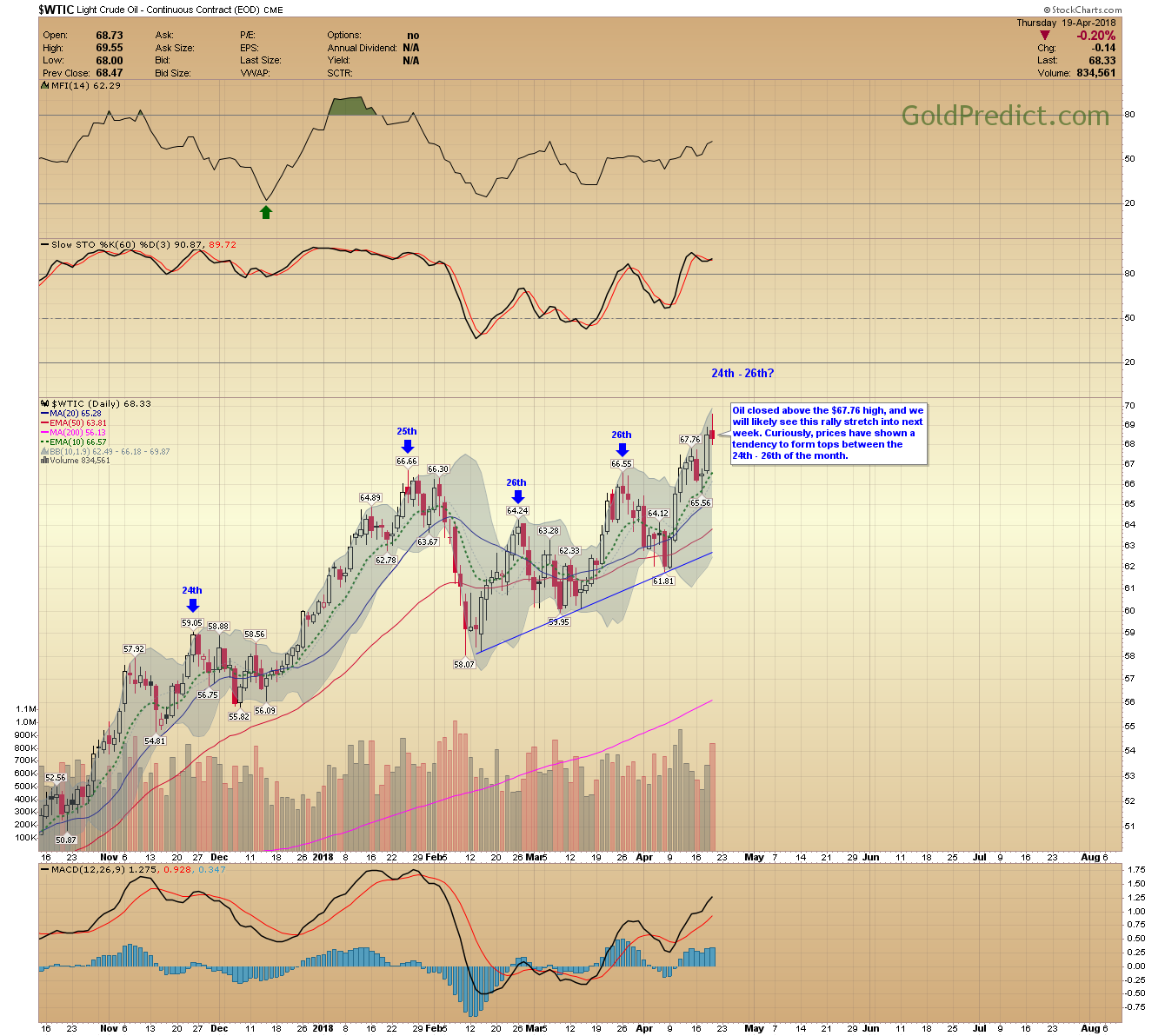 Have a great night. The weekend newsletter will be out Saturday.

This article was published Posted on April 19, 2018 in Categories Reports