Gold is approahing an important low and I see two potential scenarios.

Scenario 1) Prices formed 6-month lows on Tuesday, and a new rally is just getting started.

Scenario 2) This is just a 3-5 day bounce and prices will rollover and bottom within a week or two.

The COT for gold is neutral to mildly bullish with 311,607 commercial shorts. I prefer to see commercials below 300,000 before recommending a 6-month low.

The COT for silver remains bullish. Large speculators are net short 7,196 contracts, and commercial shorts are below 90,000 contracts.

To support a low last Tuesday, gold would have to close above $1317.40 (form a swing low) and then close progressively above the 10-day EMA. Until that occurs, I’ll maintain the bounce scenario. We should know which scenario to follow sometime next week.

The last 18-months have been challenging for metals investors. It’s difficult to earn profits consistently when prices are rangebound. I appreciate your loyalty and believe your perseverance will be rewarded.

Gold should decisively breakout above $1400 during the next advance and establish a clear uptrend. Silver and miners should do exceedingly well once this bottom is set.

-US DOLLAR- The dollar is overbought and up against stiff resistance. Closing below 92.19 would from a swing high and possible top. 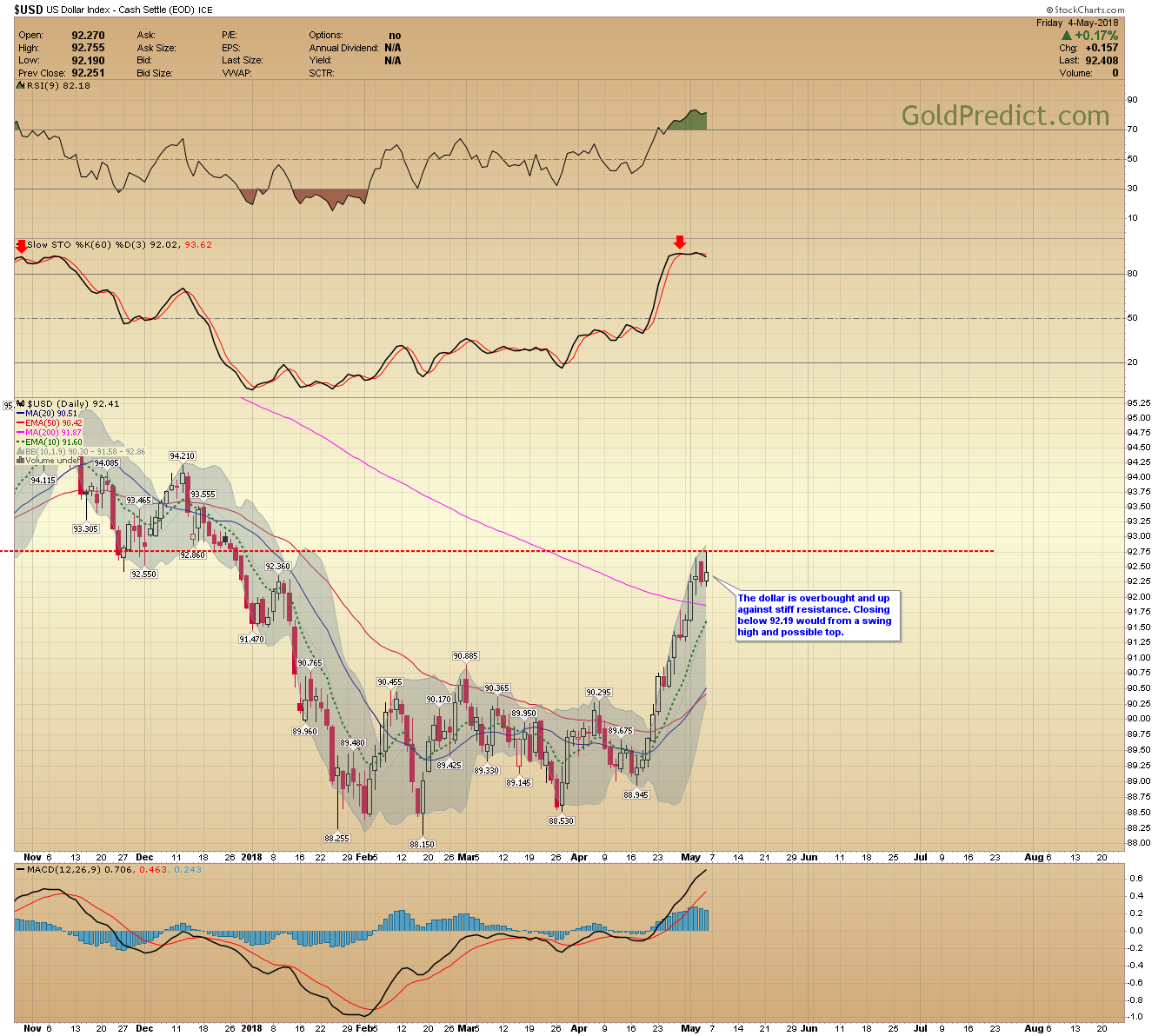 -GOLD WEEKLY- Gold is approaching a 6-month low. Prices should bottom between now and mid-May. The next 6-month cycle should rally and finally breakout above the long-term green trendline. 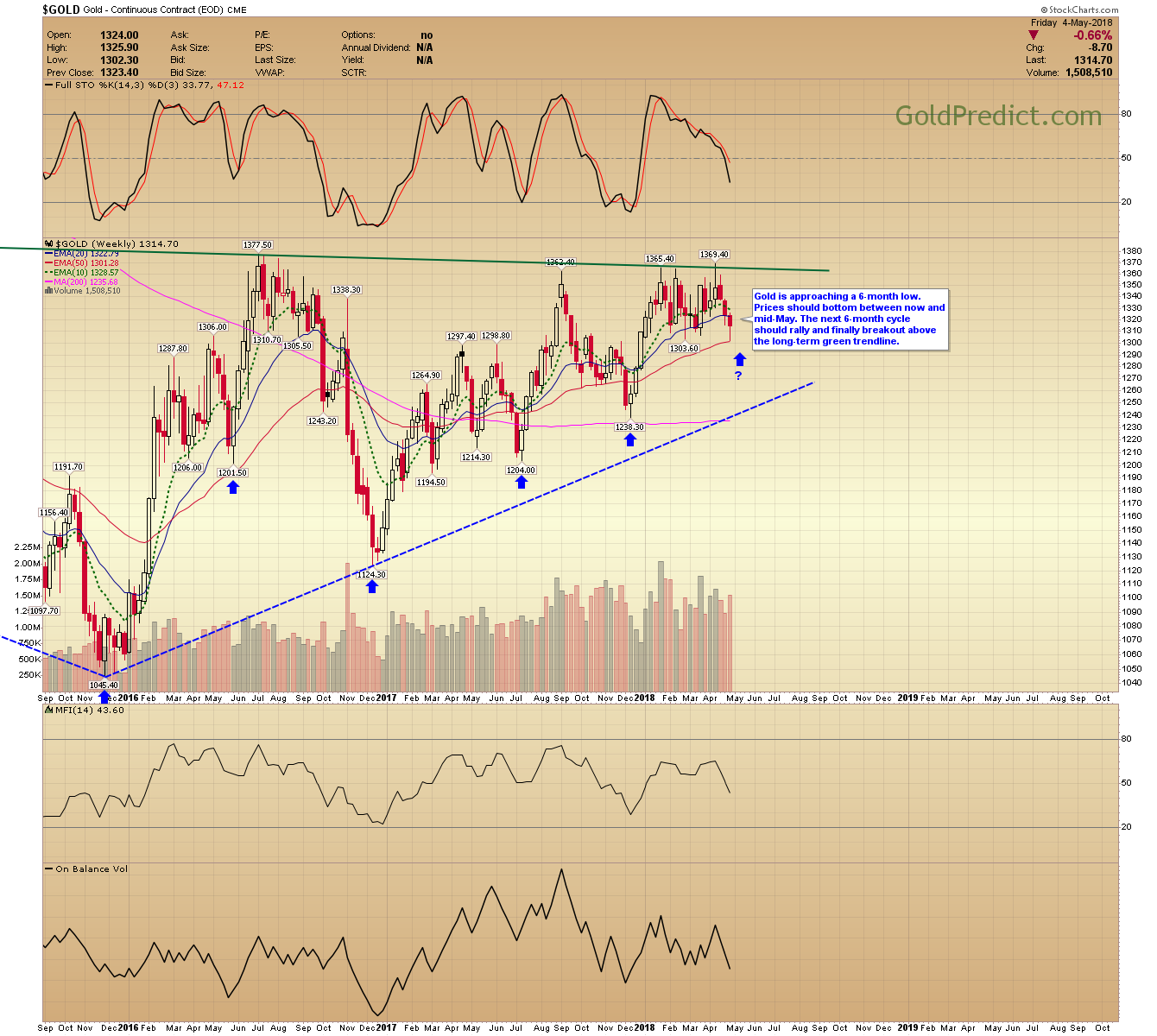 -GOLD- The 6-Month cycles have averaged 104-trading days between lows. Two standard deviations suggest a timing window between 94 – 112 trading days. Friday marked the 98th day of this cycle, so a low is possible.

However, other indicators (force index & RSI) are yet to reach levels characteristic of a low. Consequently, we favor a little more downside and buying opportunity within a week or two. Progressive white candle closes above the 10-day EMA would raise the potential for a bottom last Tuesday at $1302.30. 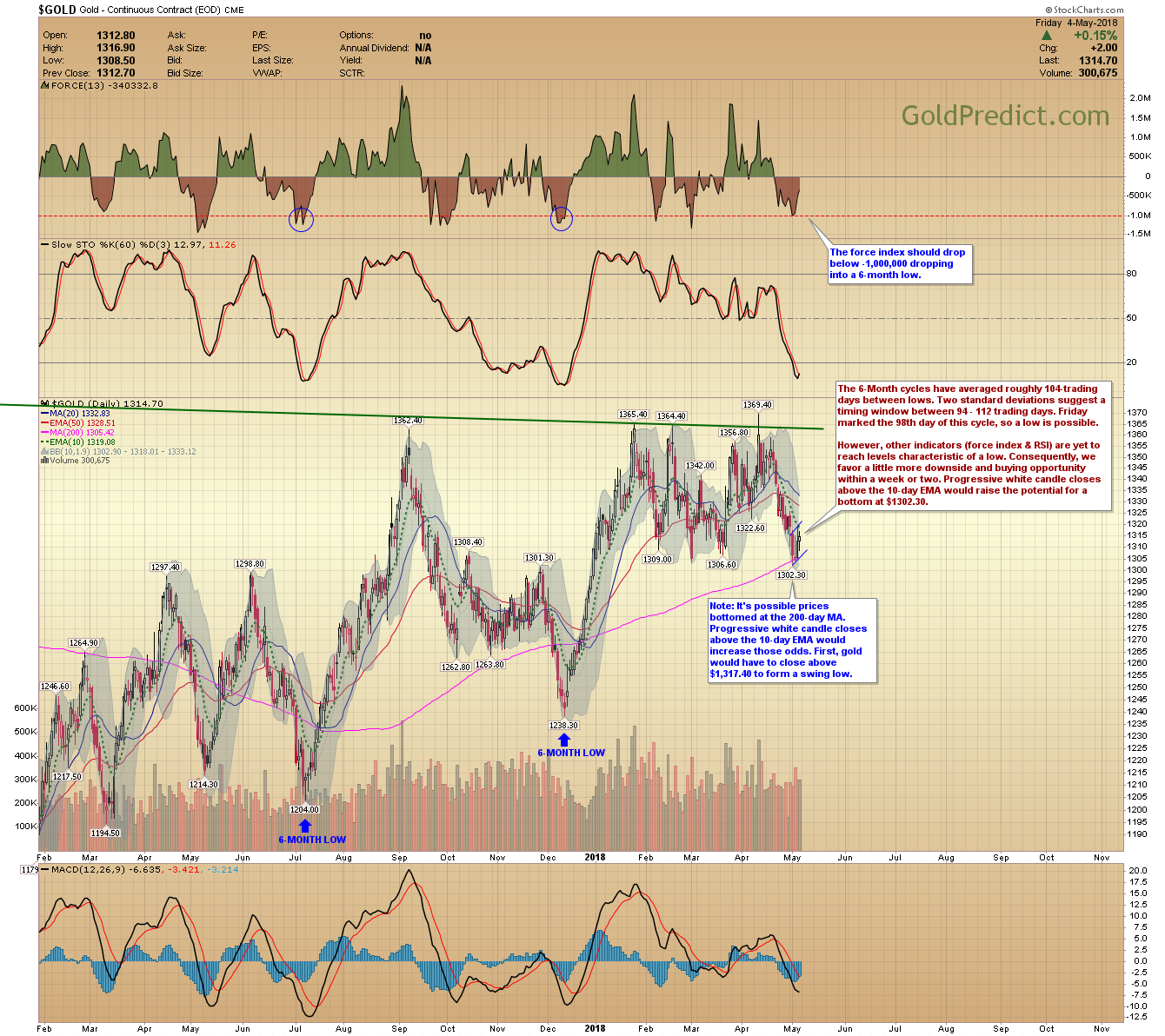 -SILVER WEEKLY- The COT remains bullish. Large speculators are net short 7,196 contrasts, and commercial shorts are in a bullish configuration. The 6-month cycle may have bottomed last week. If not, then prices should bottom within a week or two.

Prices formed a weekly reversal candle after testing support at $16.10. The COT is bullish, and a low is feasible. However, a decline back to $15.65 remains plausible. 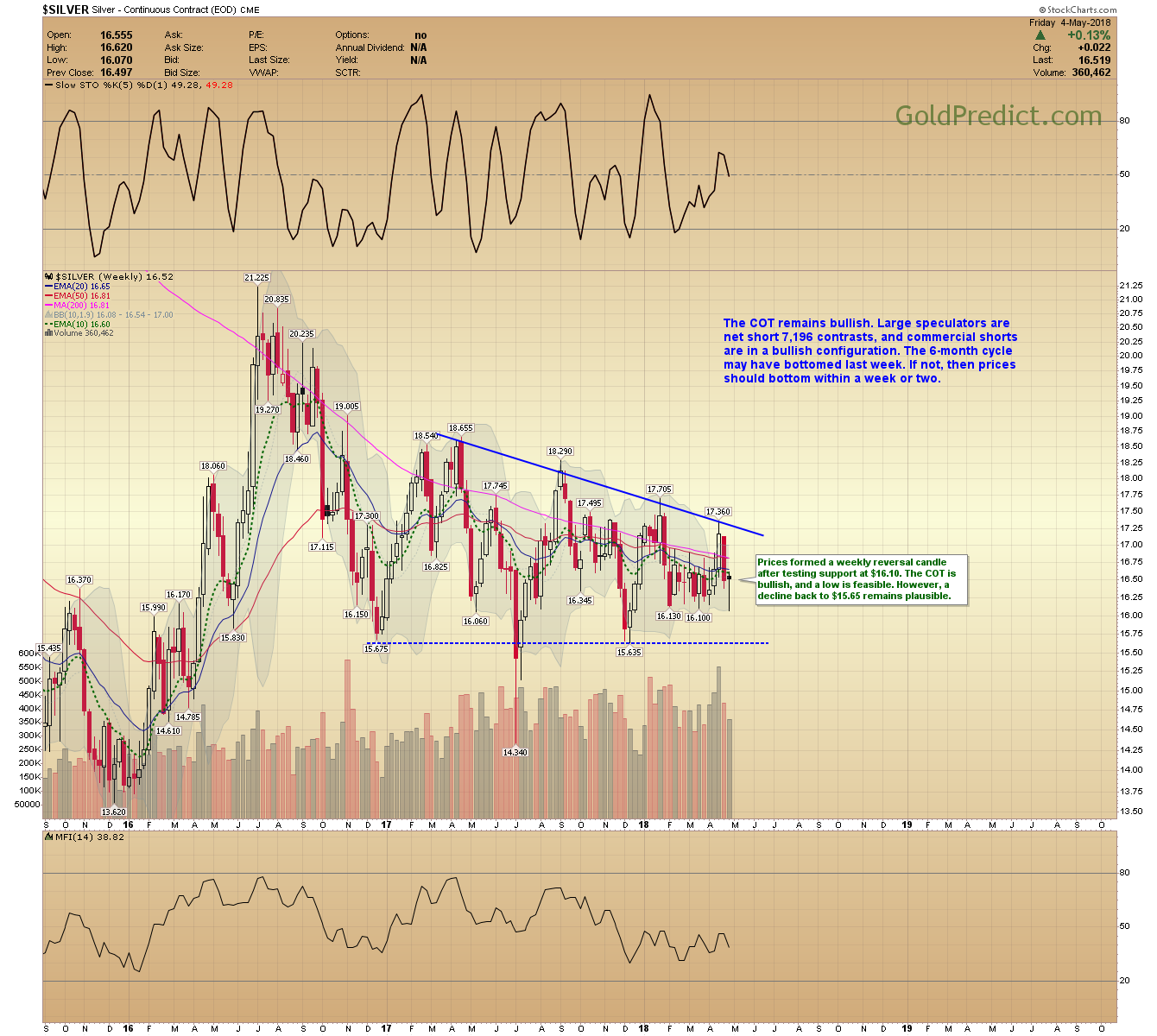 -SILVER- Prices formed a swing low and closed above the 10-day EMA. A 6-month low is possible. However, indicators remain above oversold levels that typically signal a bottom. We favor a decline below $16.00 and cycle low within a week or two. Progressive closes above the 200-day MA ($16.80) would sponsor a bottom and a subsequent buy signal.

-HUI:GOLD RATIO- Consecutive closes above .1405 would imply a 6-month low. Breaking the trendline would support a 1-2 week decline. 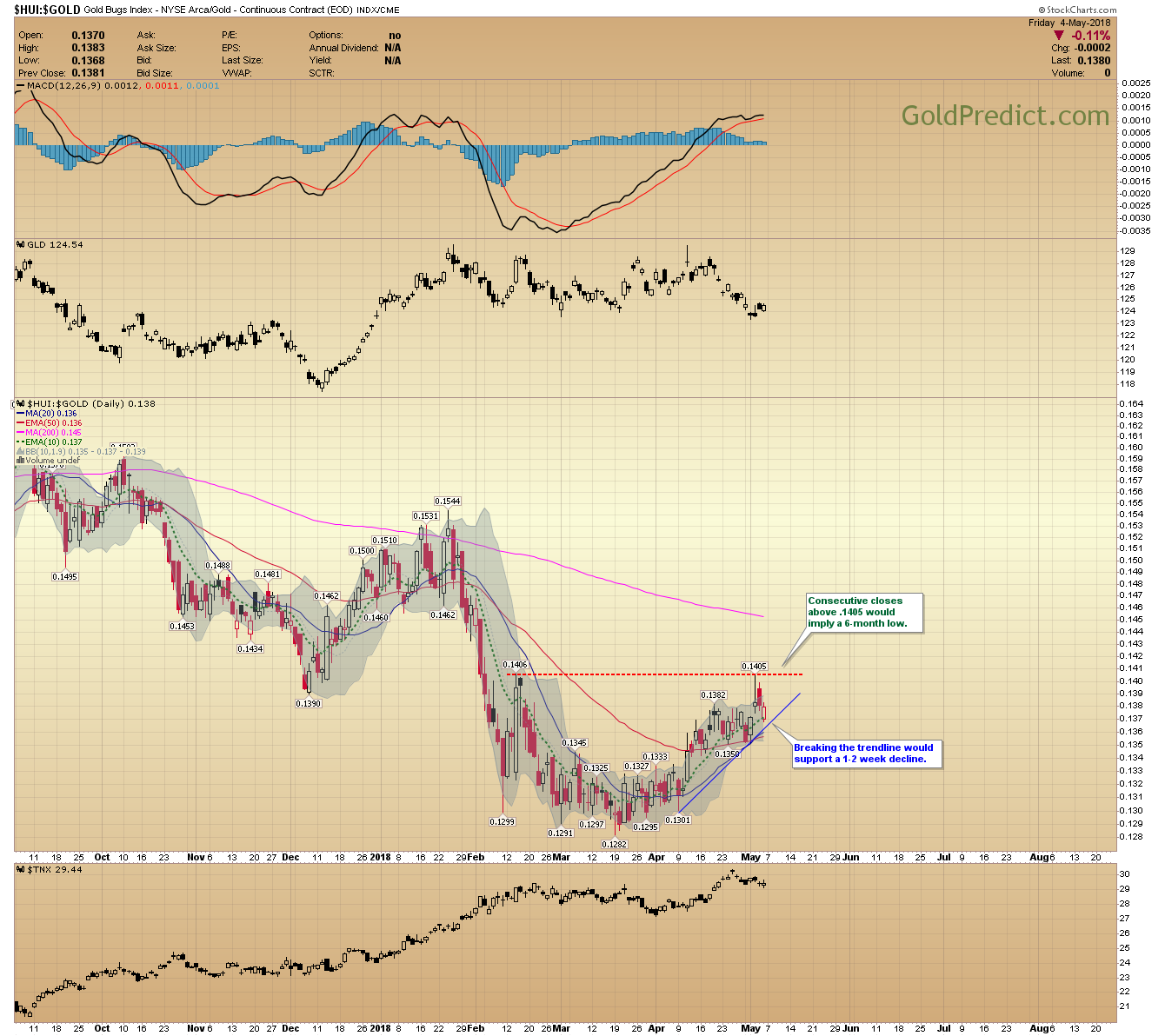 -GDX- Volume is declining, and we are treating this as a bounce. A breakout above .1405 in the HUI:GOLD ratio and GDX closing above $23.15 would recommend a bottom and subsequent buy signal. Otherwise, we expect a cycle bottom within a week or two. 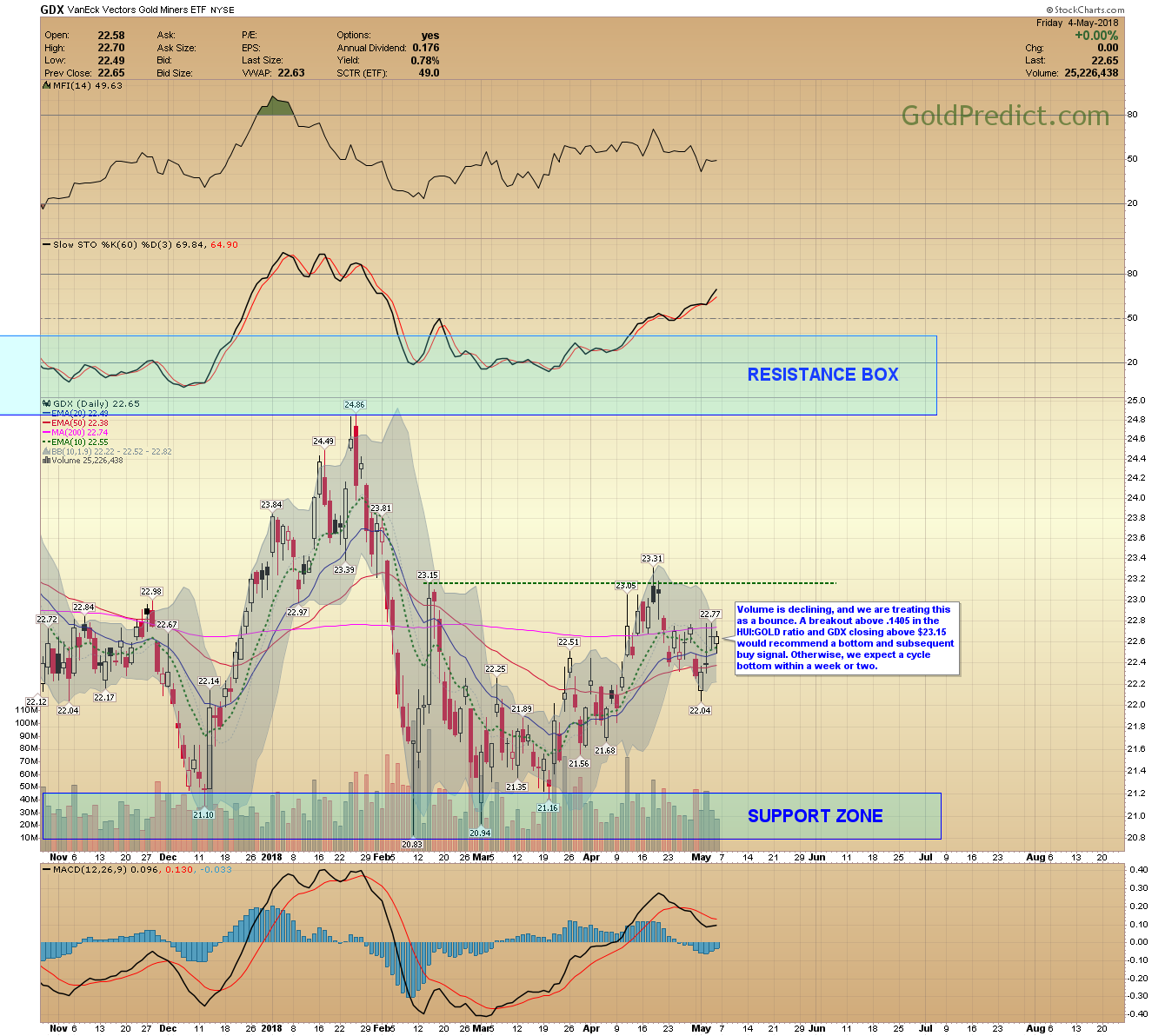 -GDXJ- If this is just a bounce, then juniors should rollover and decline below the trendline in the next week or two. I’ll consider a bottom if volume picks up and prices close progressively above $34.00. 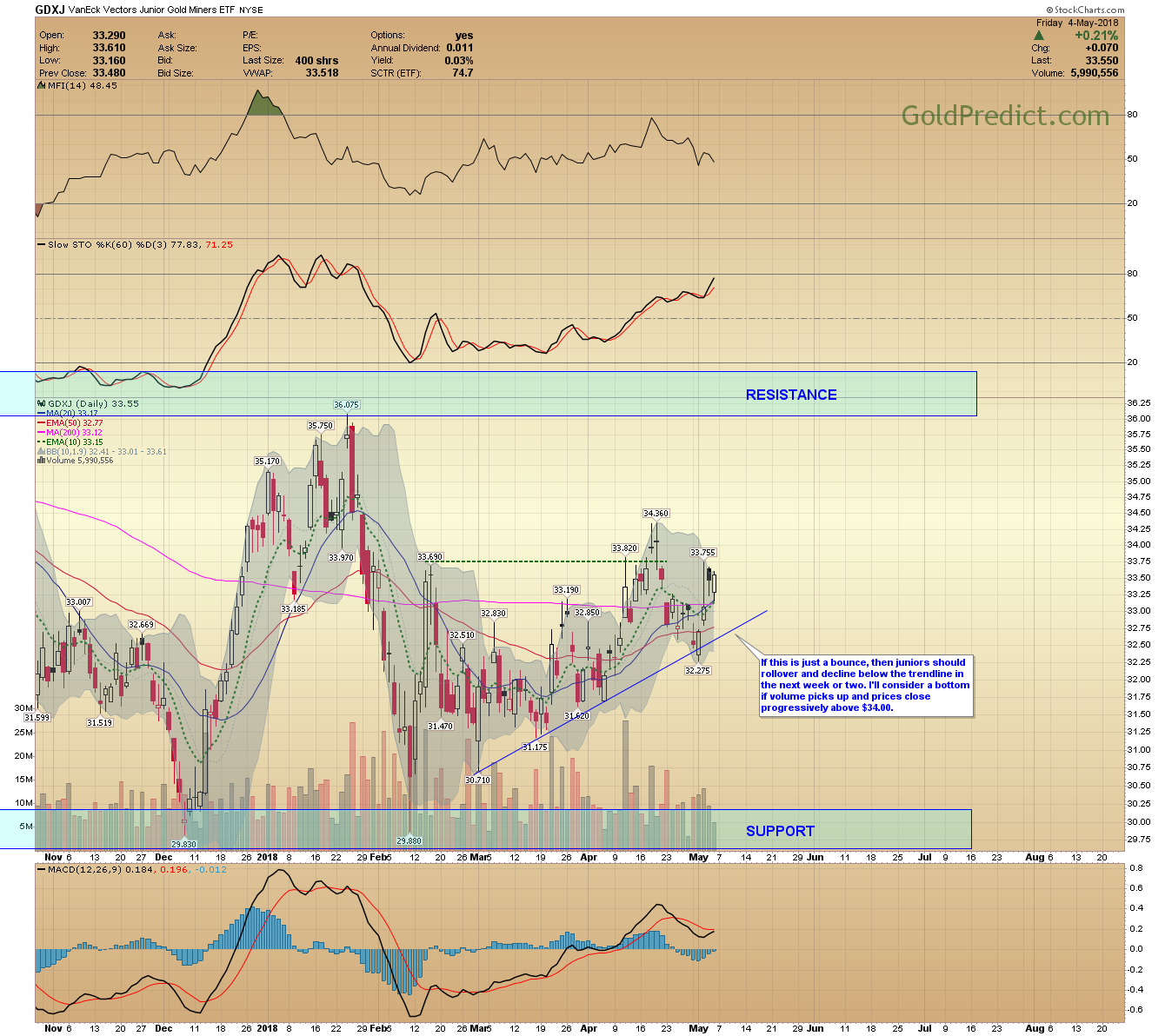 -SPY- Stocks bounced off critical support at the 200-day MA and rallied sharply on Friday. The 200-day is extremely important. Breaking below it would likely trigger a selling event. Stocks would have to close above the April 271.30 high to recommend a rally. 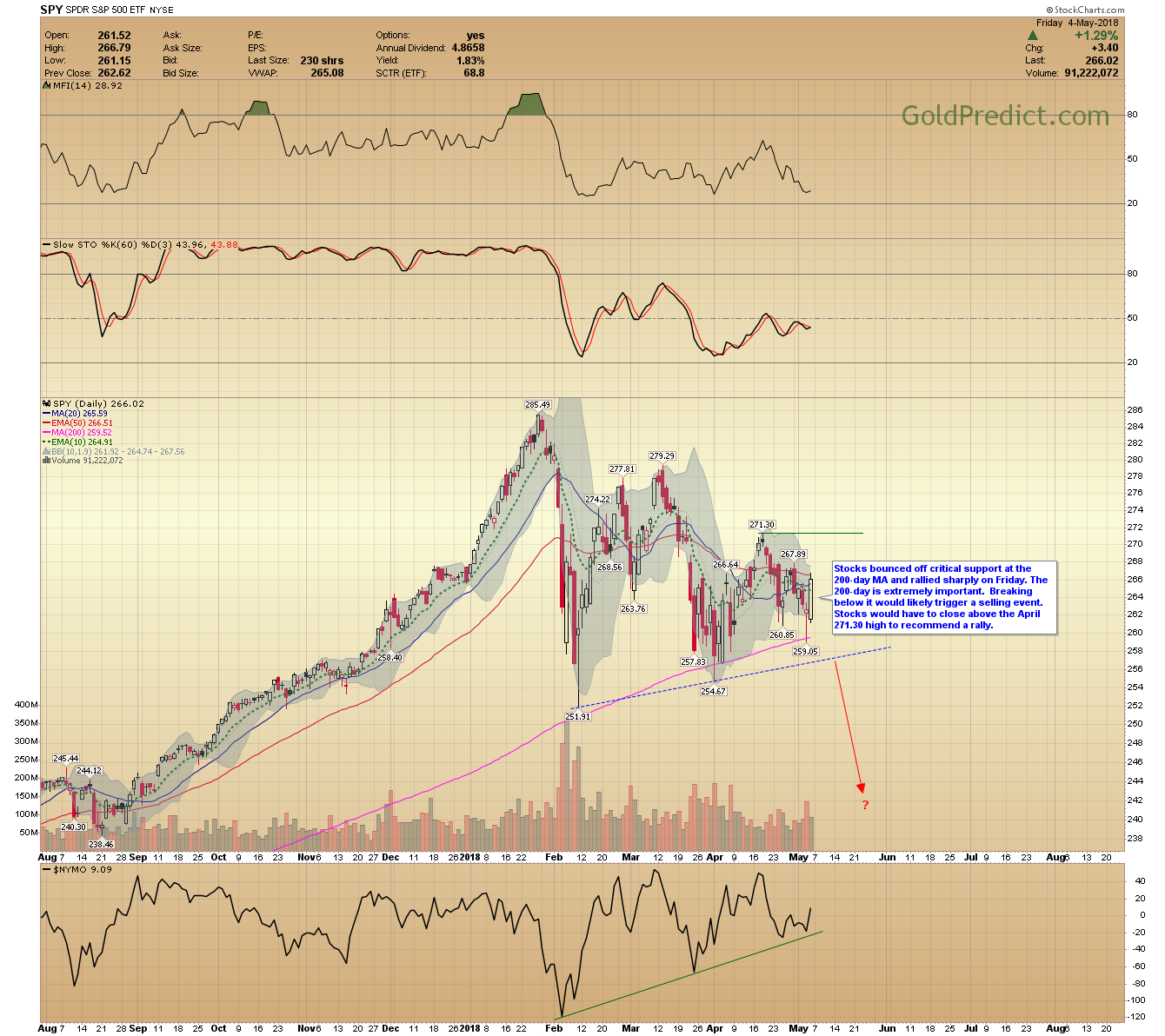 -WTIC- Oil and the stock market have been positively correlated. The next 39-41 day cycle arrives May 23 (+/- 1-day). Oil would have to break lower and close below $66.50 to support a decline into May 23rd. Otherwise, May 23rd will likely mark another short-term top. A breakdown in oil would presumably harmonize with a decline in SPY below its 200-day MA. 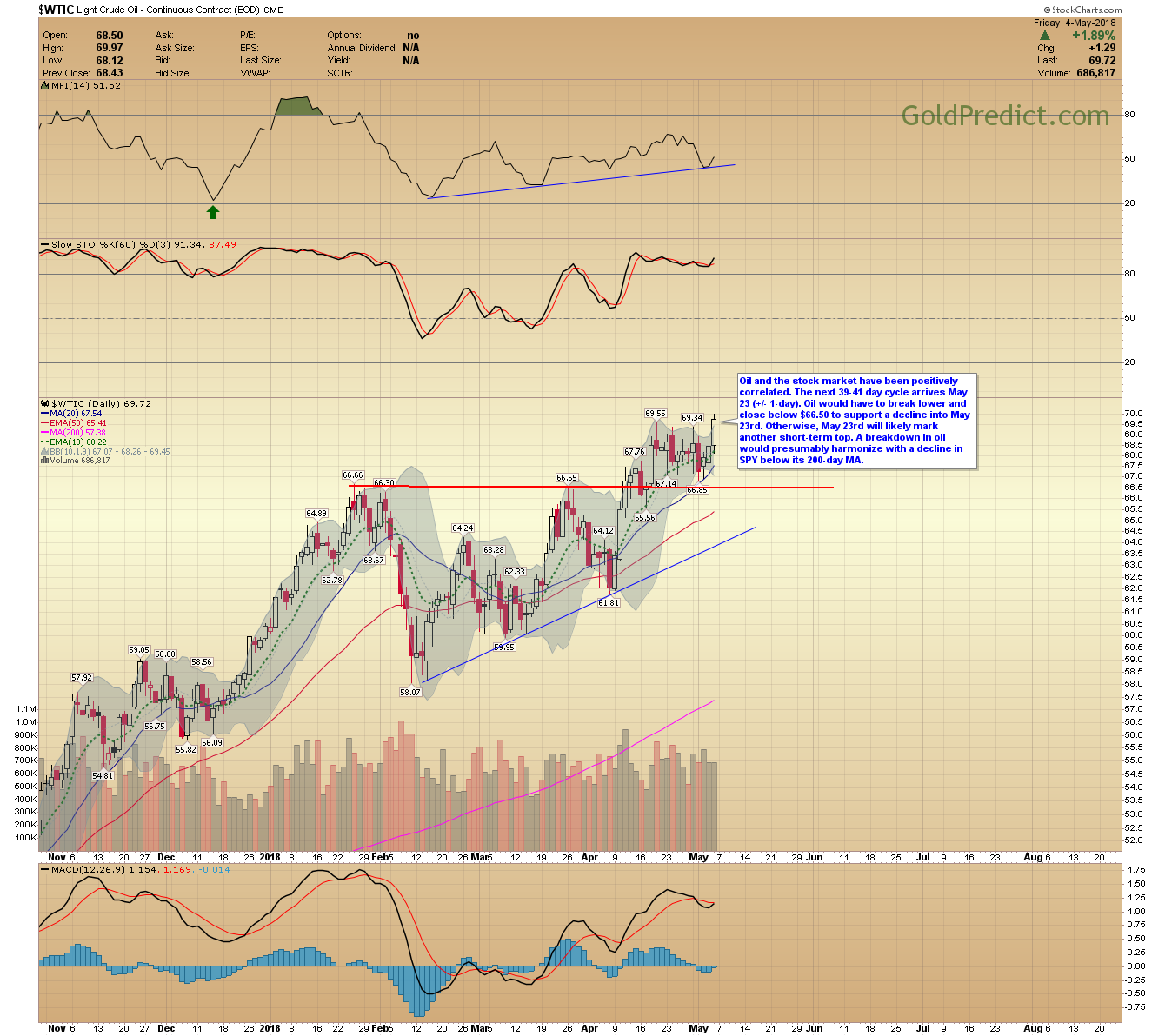 We are in the timing band for a 6-month low, but most indicators haven’t reached levels consistent with a low. I’ll monitor the structure closely and update as needed. If gold establishes scenario one, I’ll change the color codes and enter long positions.

This article was published Posted on May 5, 2018 in Categories Weekend Newsletters