The persistent 3-month decline in gold cut much deeper than I anticipated. As the cycle extended, gold broke key levels at $1280, and $1238. This renewed calls for a bear market and imminent collapse. I remain firmly bullish on the yellow metal and believe the washout period is over.

Member after member reached out to me last week with their bearish fears and opinions, understandably. This prompted me to write the “Emotional Peak” article. When sentiment approaches such extremes, a reversal isn’t far off. Gold reached $1,210 the very next day and established a bullish engulfing swing low on Friday.

Friday’s COT report for gold offered some refreshing improvement. Commercial traders reduced their net short position by roughly 27%. It now stands at -73,635 contracts, which is the precise level that accompanied the July 2017 low. As a reminder, after bottoming last July gold rallied from $1204 – $1362 in just 8-weeks.

The bullish case for platinum continues to astonish. Commercials increased their net long exposure from 366 to 3,170 contracts. The last time commercials were net long was in 2004 (316-contracts), and prices rallied from $800 to $2200 in 4-years.

Is it time to be a contrarian? Maybe it’s just me, but it seems like there are a lot of calls for gold to break below $1200, and much lower. Perhaps it will, but what if prices bottomed Thursday at $1210, as I believe? The bears will push their shorts expecting another breakdown. If prices rally instead, they will need to cover these shorts into a rising market. That may provide the fuel for a short-covering rally. In that event, gold could rise just as sharply as it collapsed. 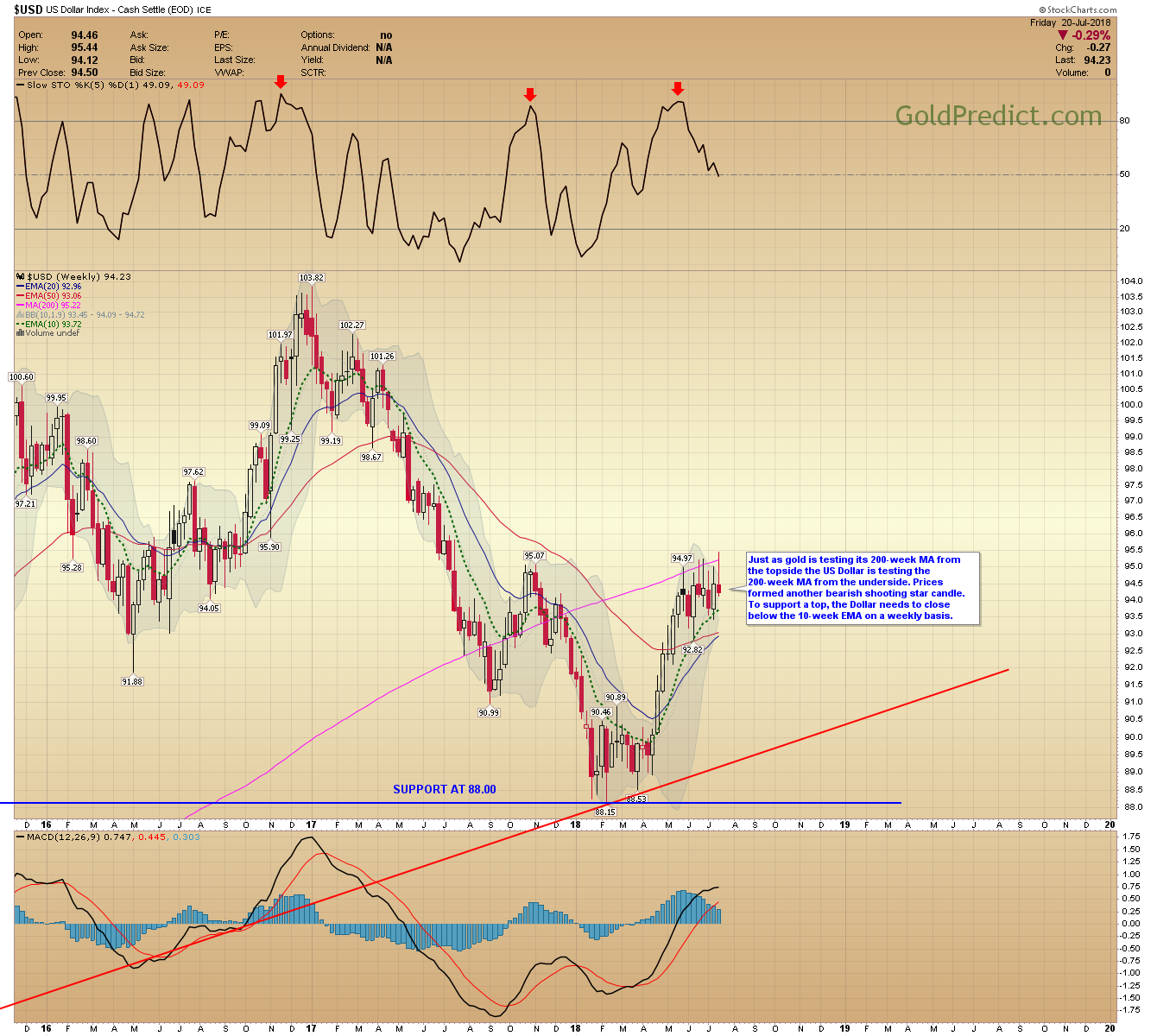 -US DOLLAR DAILY- The pattern in the dollar has been frustrating. It’s possible this is an inverse pattern to the February/April base. The dollar would have to close progressively below the July low (93.44) low to establish a top and subsequent breakdown. That would nullify the potential for a terminal 1-2 week rally into early August. 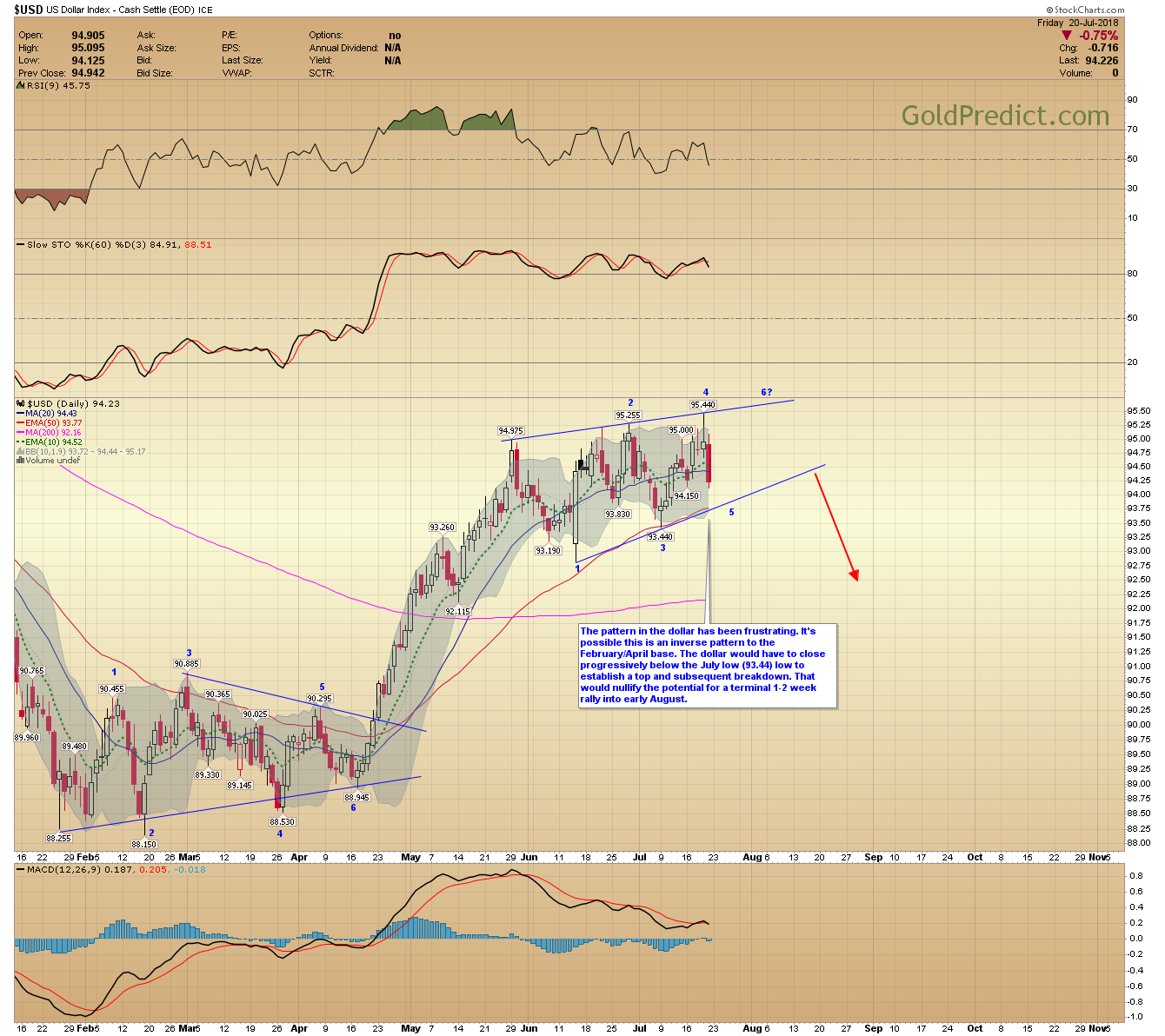 -SYMMETRICAL BASE- The recent breakdown was unforeseen on my end for sure. However, it brings a sort of symmetry to the 5-year basing pattern. If gold forms a bottom here, I can make a case for a low profile V-basing pattern with trendline encroachments on either end. If correct, and the model continues to mirror the left side, then we should see an accelerated uptrend that breaks above the $1370 level later this year. 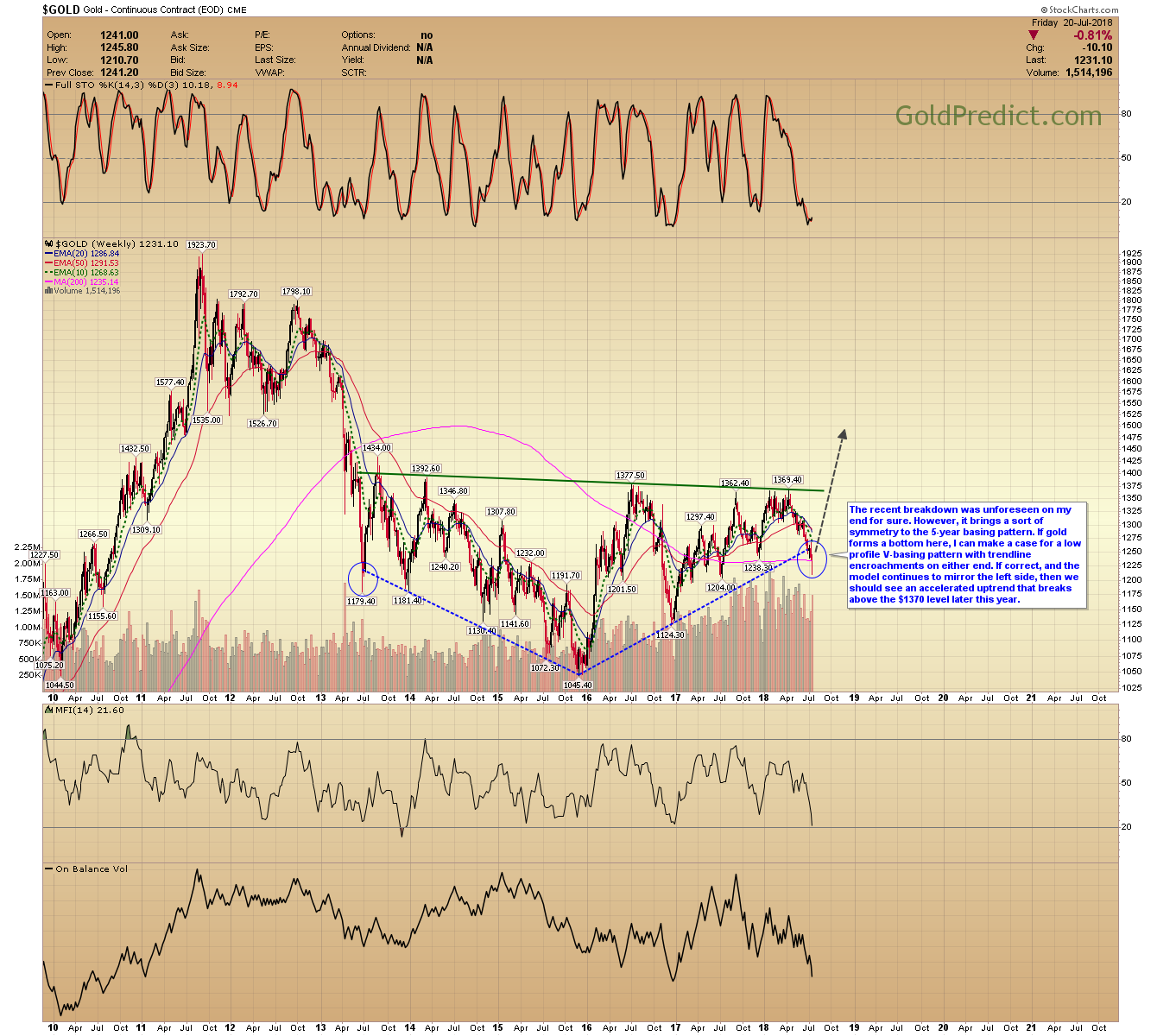 -GOLD WEEKLY- There’s no denying gold breached some critical levels. Sentiment is depressed, and there are calls for a bear market. This is not my perspective.

Gold is desperately overdue for a low. The COT numbers are favorable and at the exact level that formed the July 2017 low. Prices attacked but closed just $4.00 below the 200-week MA. A low is likely, and critical resistance resides at $1313.

Critical resistance at $1313: To silence the bears, gold needs to recapture the $1313 level. That would setup a retest and likely breakout above $1370 later this year. Failing to regain $1313 by September/October would open the door to the bearish arguments. 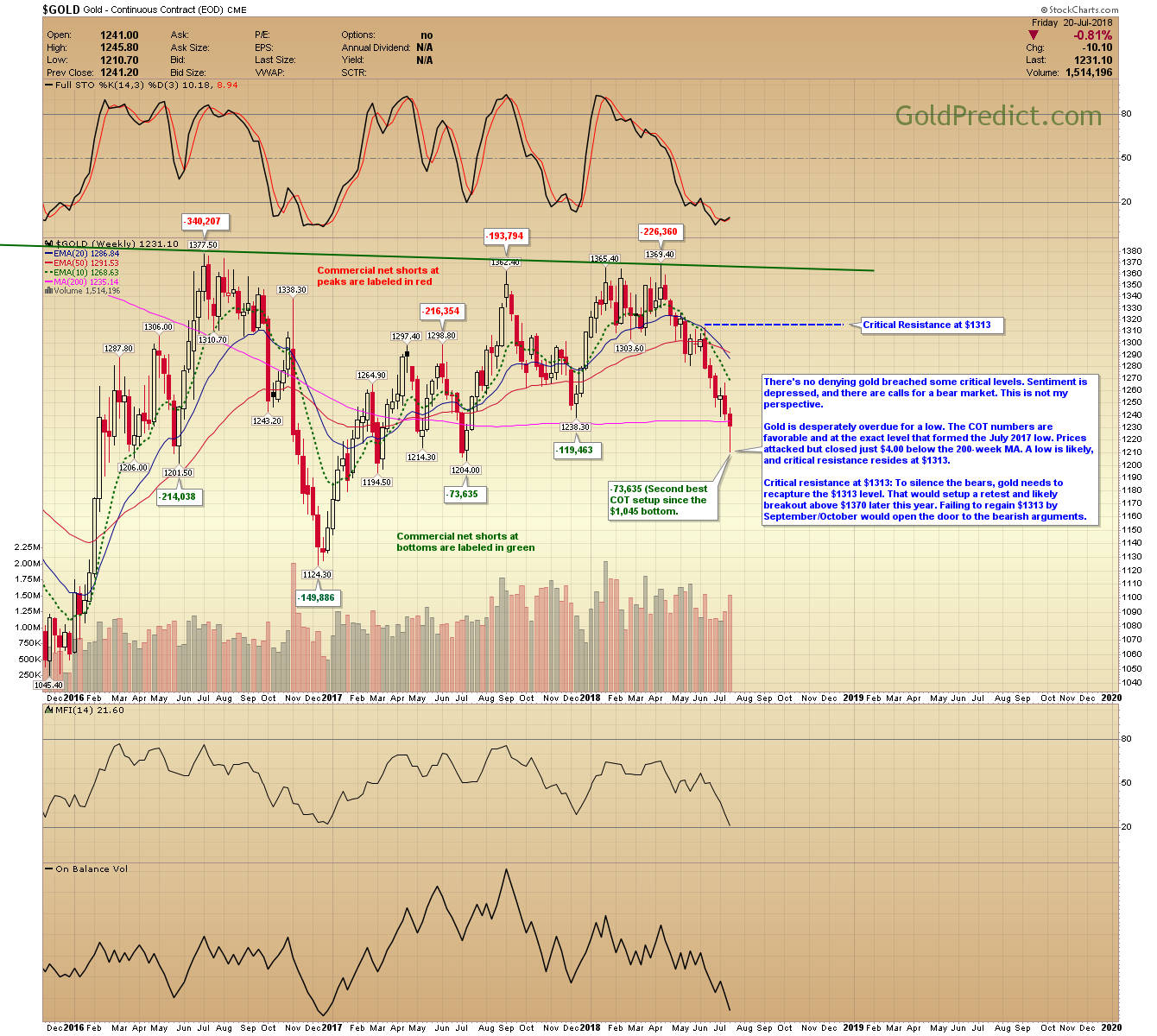 -GOLD DAILY- I hate to put gold in a box, but it’s put up or shut up time for the yellow metal. Prices peaked at $1377.50 2-years ago; we are yet to see a higher high. My long-term outlook called for a major bull market breakout above $1370 in 2018. I’m sticking with this call, but right now…gold is the underdog. If prices aren’t back above $1313 by September/October, I’ll have to dampen my bullish fervor.

On a positive note, prices formed a bullish engulfing swing low. A bottom is highly probable. This is the first legitimate swing low since the breakdown below $1281. Prices could retest the $1,210 level early next week, but gold would have to close decisively below $1210 to nullify Friday’s bullish reversal.

If my most bullish presumptions are correct, then I’d expect to see a sharp advance over the next several weeks that catch the bears off-guard. 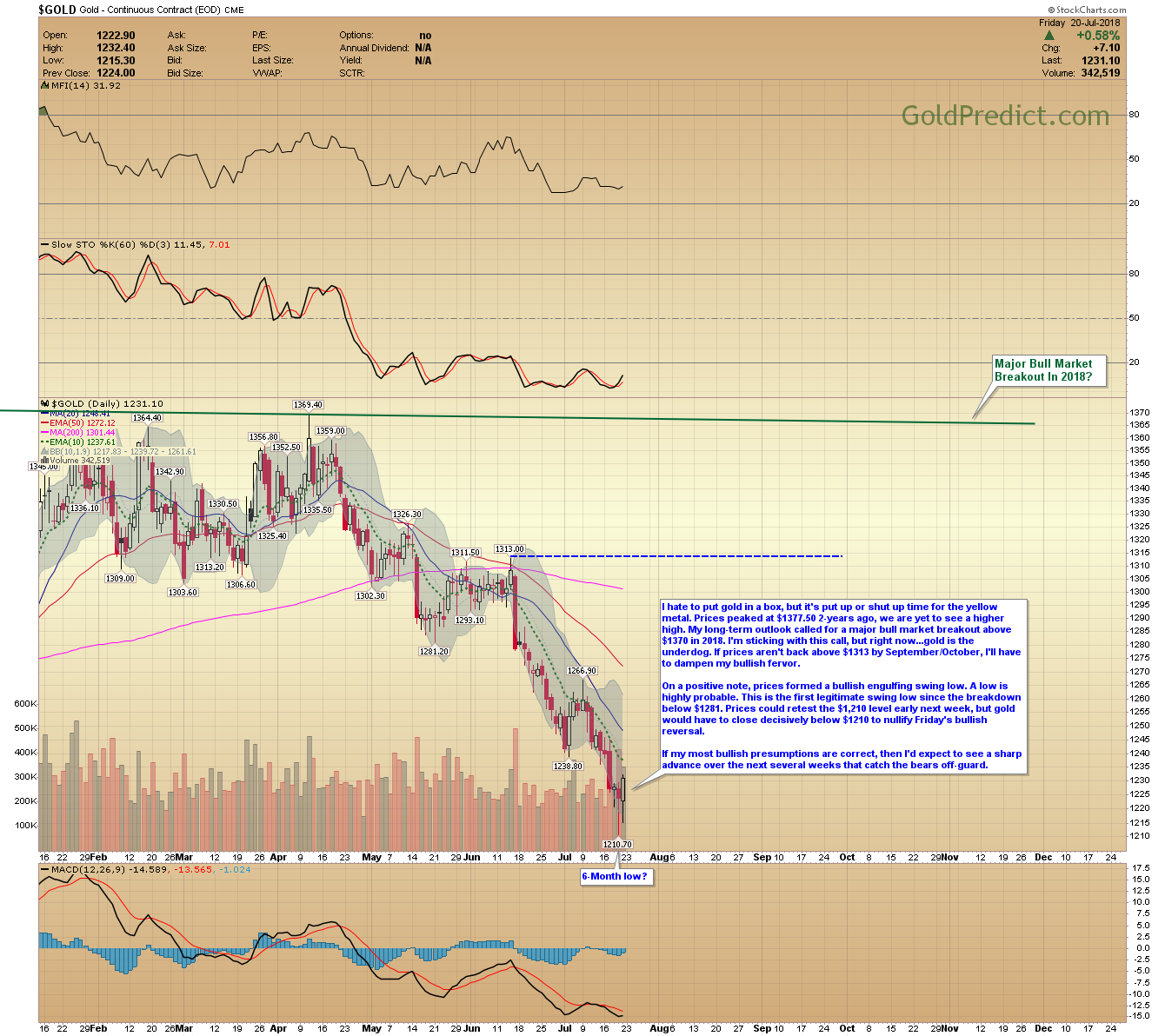 -PLATINUM WEEKLY- There is long-term support in Platinum between $750 – $800 dating back to 2004. Prices formed a hammer reversal candle, and a weekly close above $836 will establish an intermediate low. The COT report became even more bullish. Commercials increased their net long exposure from 366 to 3,170 contracts. The last time commercials were net long was in 2004 (316-contracts), and prices rallied from $800 to $2200 in 4-years. The bullish case for Platinum only improves. 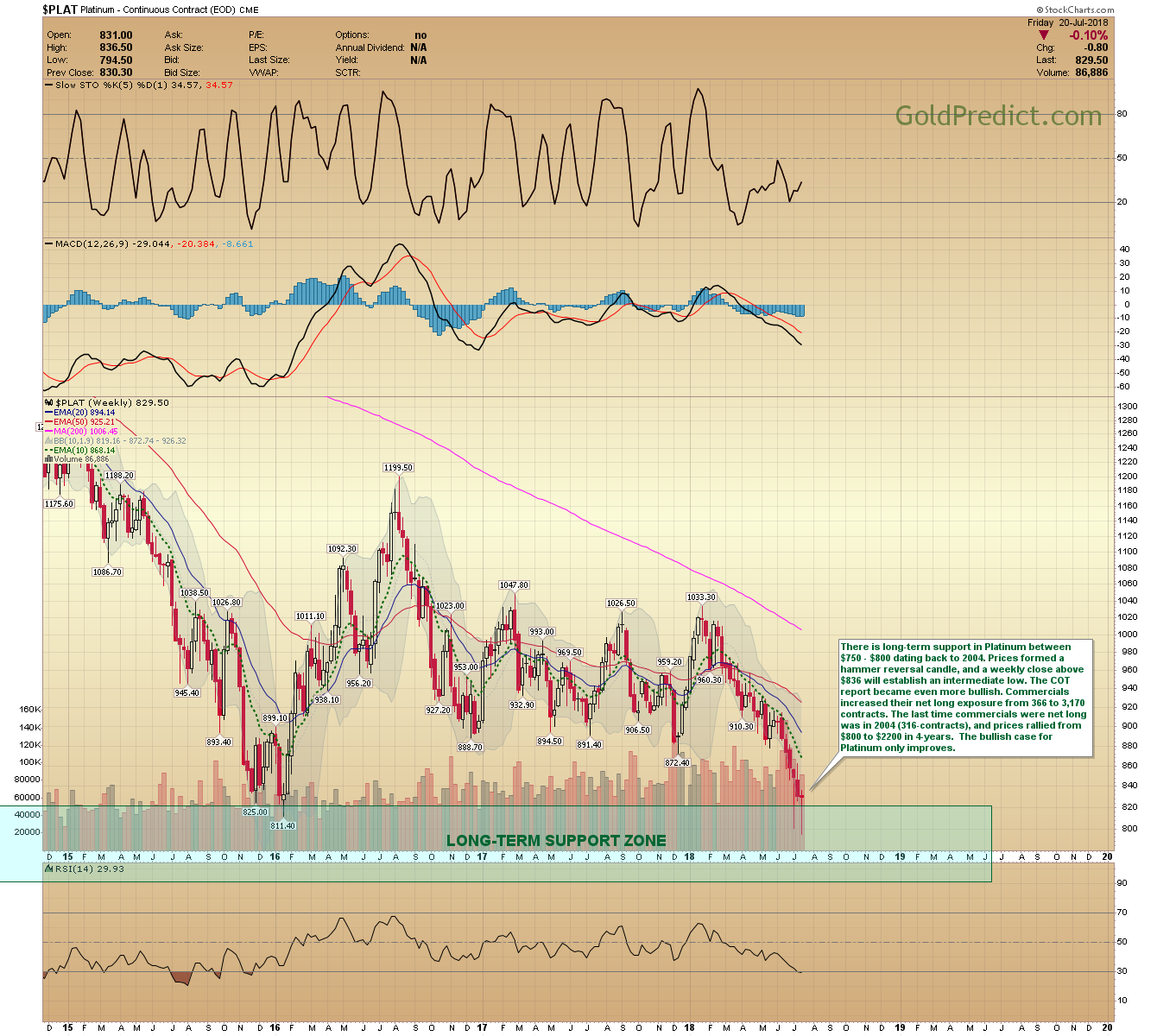 -SILVER WEEKLY- Like gold, it’s put up or shut up time for silver. Prices have formed multiple 6-Month lows in the $15.00 range over the past 2-years. Another bottom is likely now. Silver needs a weekly close above $15.90 to establish a low and attempt another breakout above the blue trendline.

On a side note: I went out to dinner last night and paid $30.00 for a specialty pizza. I was amazed that for the same amount of money I could have purchased 2-ounces of silver. Making a pizza is much easier than finding, mining and refining an incredibly useful and strategically significant precious metal…isn’t it? The value in silver here defies logic. 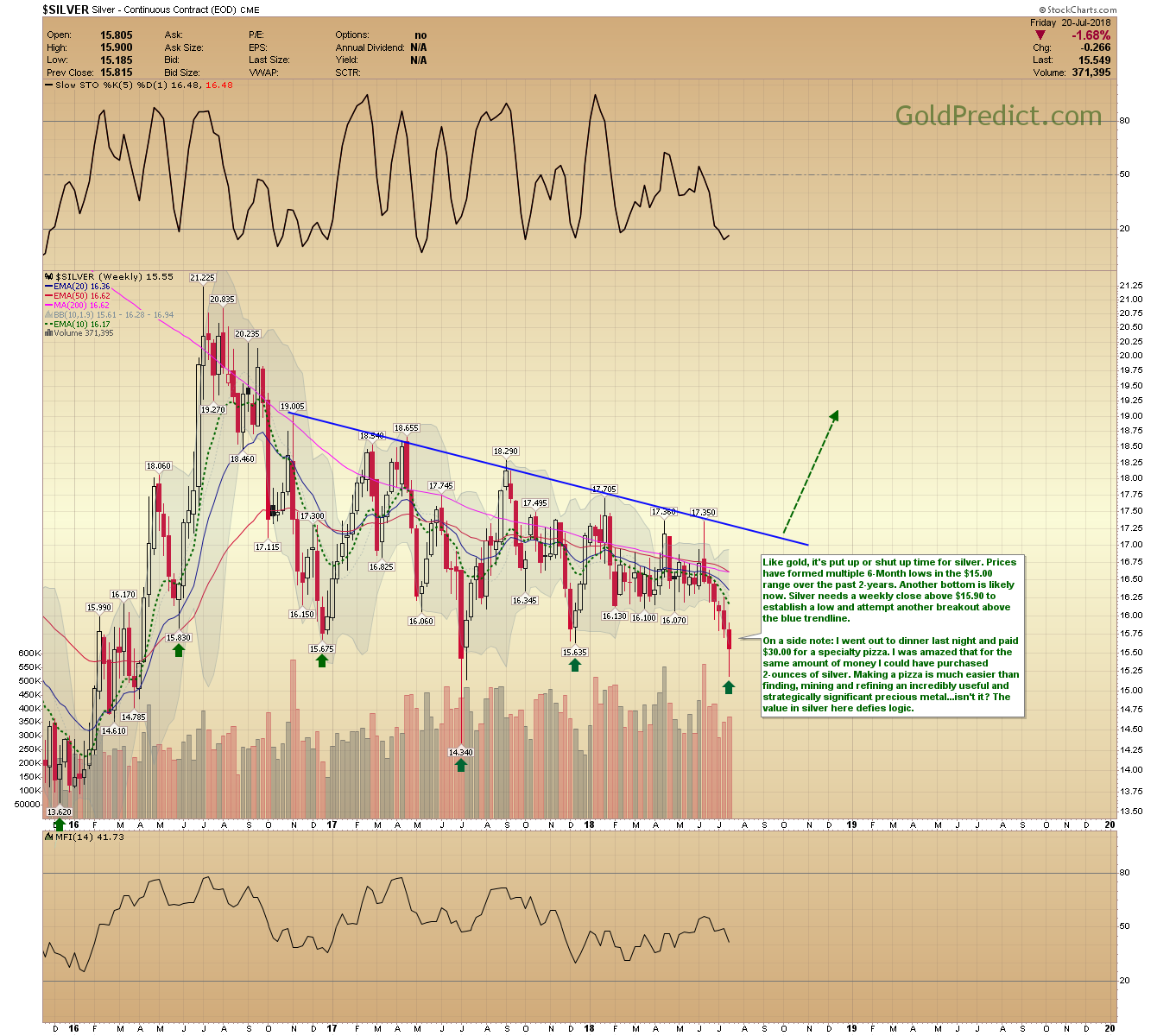 -SILVER DAILY- Prices recovered the majority of Thursday’s rout and nearly formed a bullish engulfing day. A daily close above $15.60 will install a daily swing low and promote a bottom. 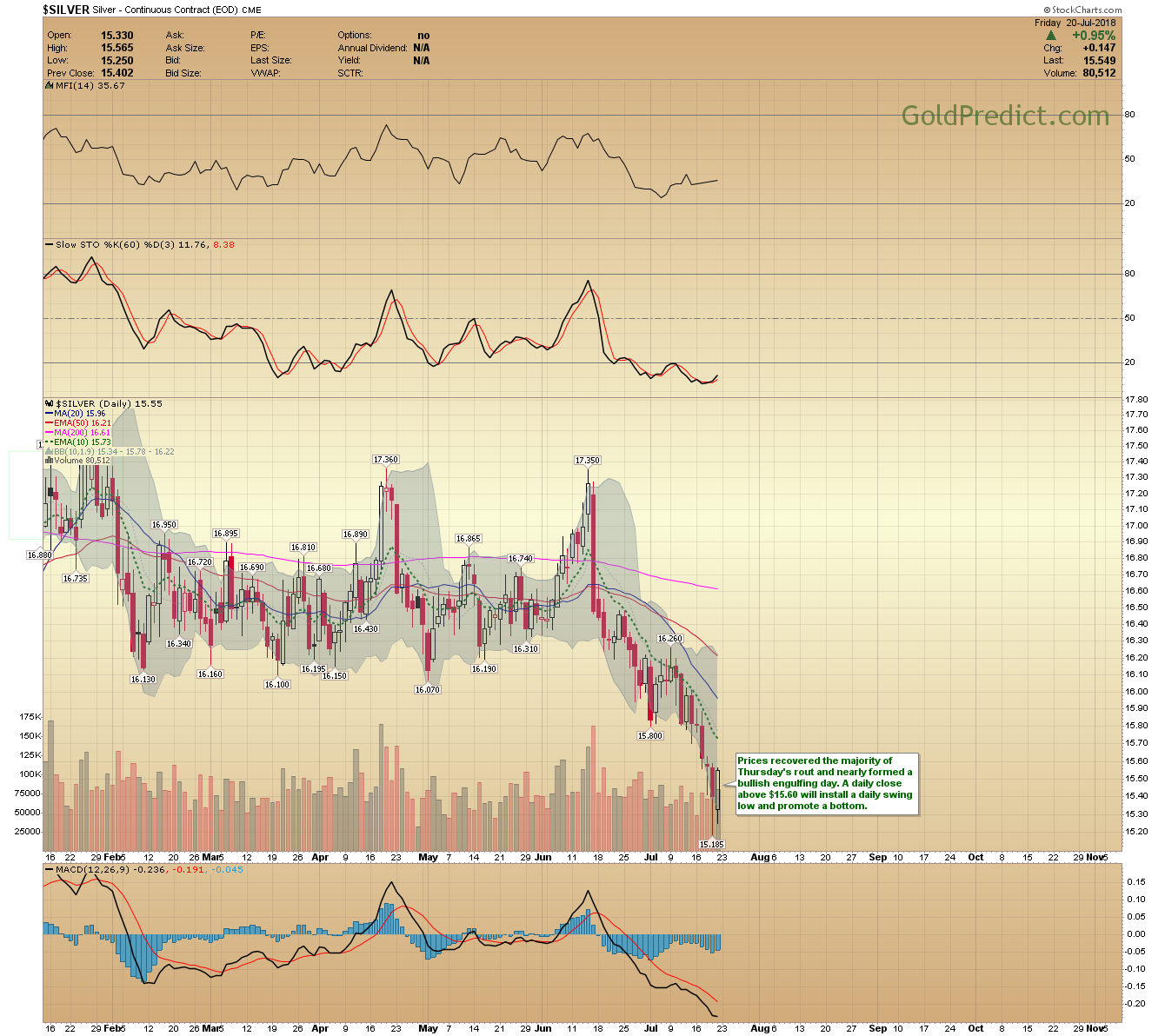 -GDX- Miners were sluggish on Friday as gold formed a swing low. Nevertheless, I think we are near a bottom. Closing above $21.92 will produce a swing low. If my bullish assumptions about gold are correct, miners should begin a sharp multi-week advance. 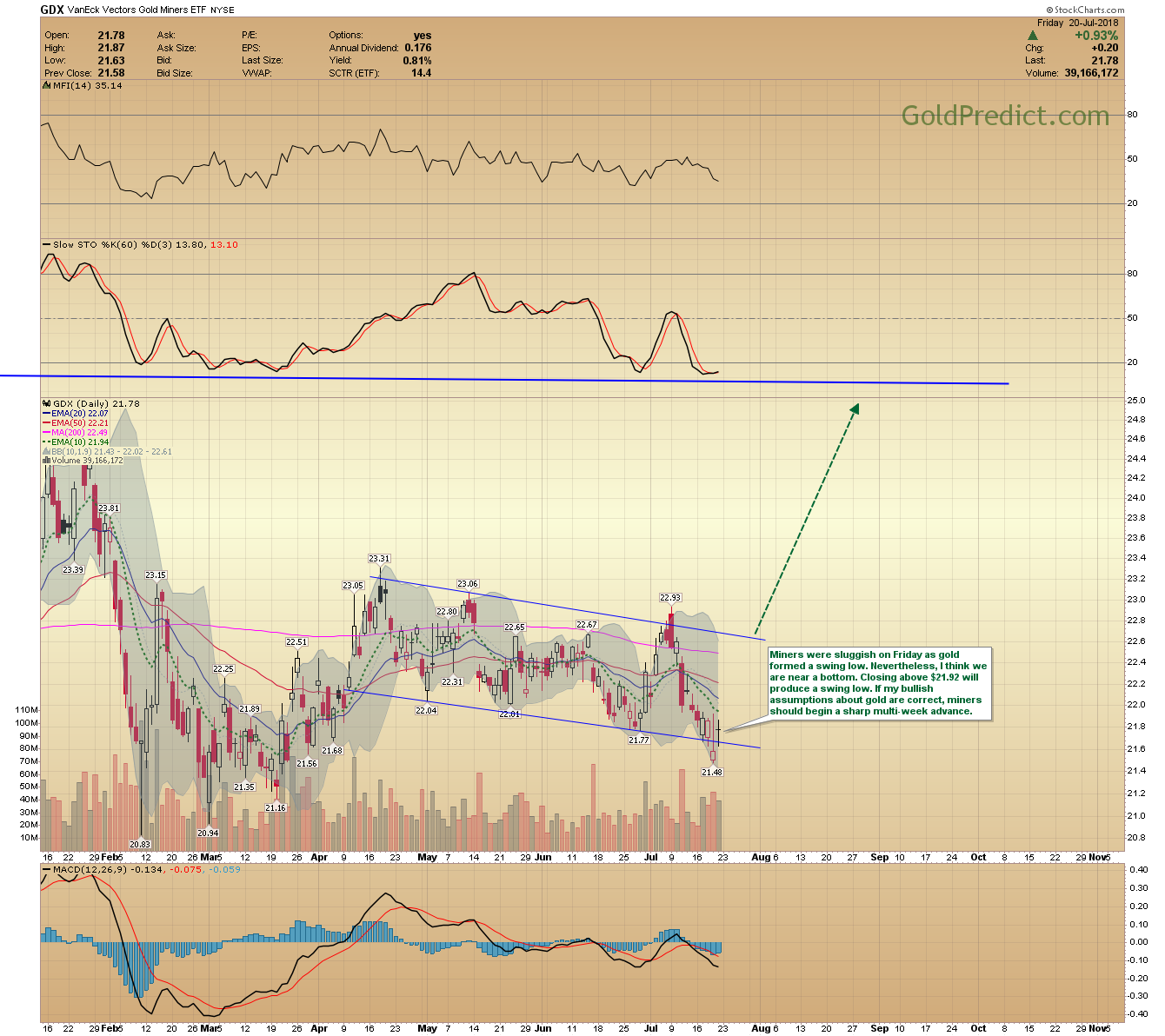 -GDXJ- Juniors overshot their lower boundary with GDX. Closing above $32.37 will establish a swing low and likely bottom. If gold bottomed as I suspect, prices should breakout above the upper boundary within 1-2 weeks. 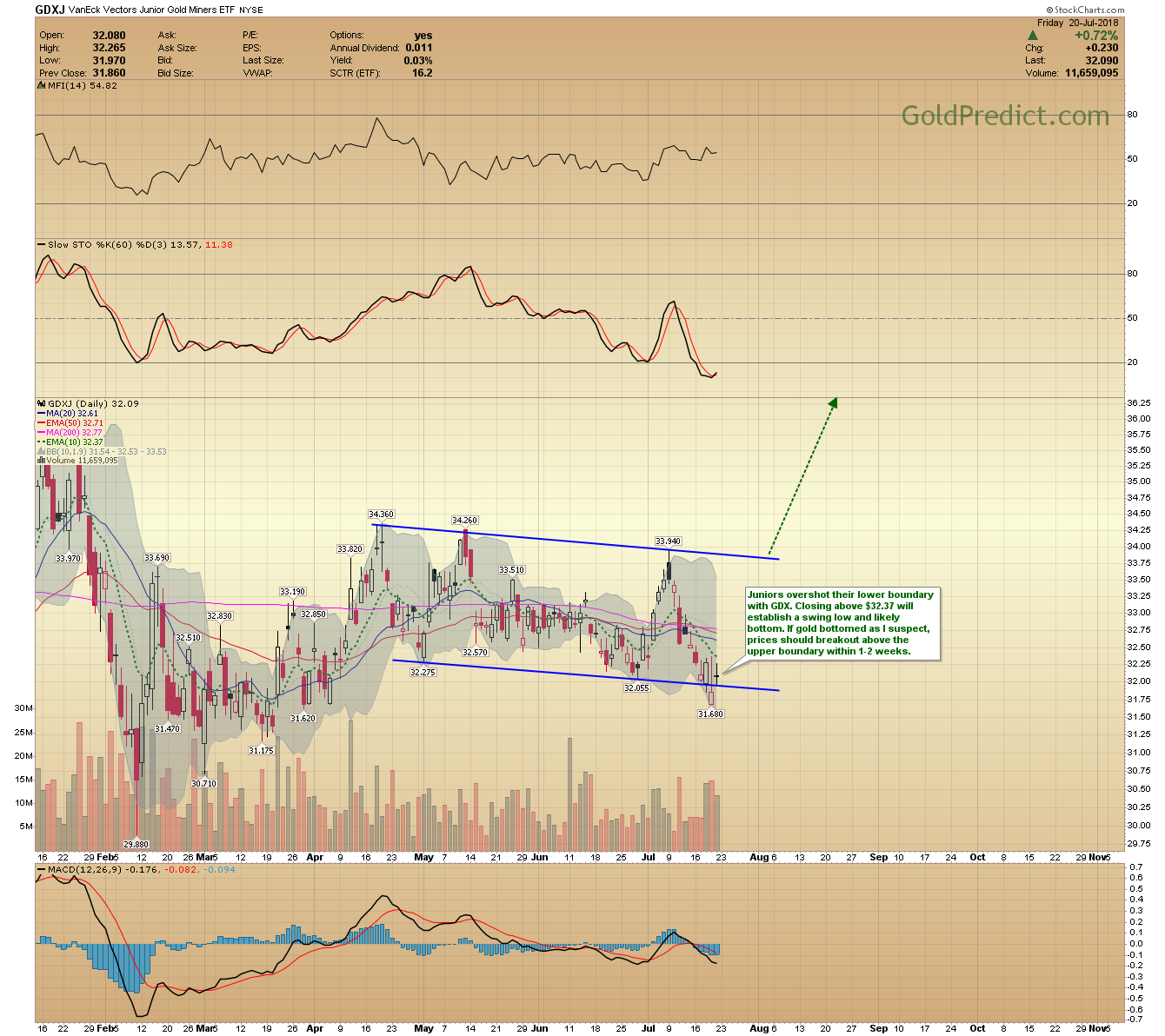 -HUI:GOLD RATIO- The HUI/GOLD ratio is still holding support around .1390. I’d like to see the ratio breakout above the blue trendline in the coming weeks. 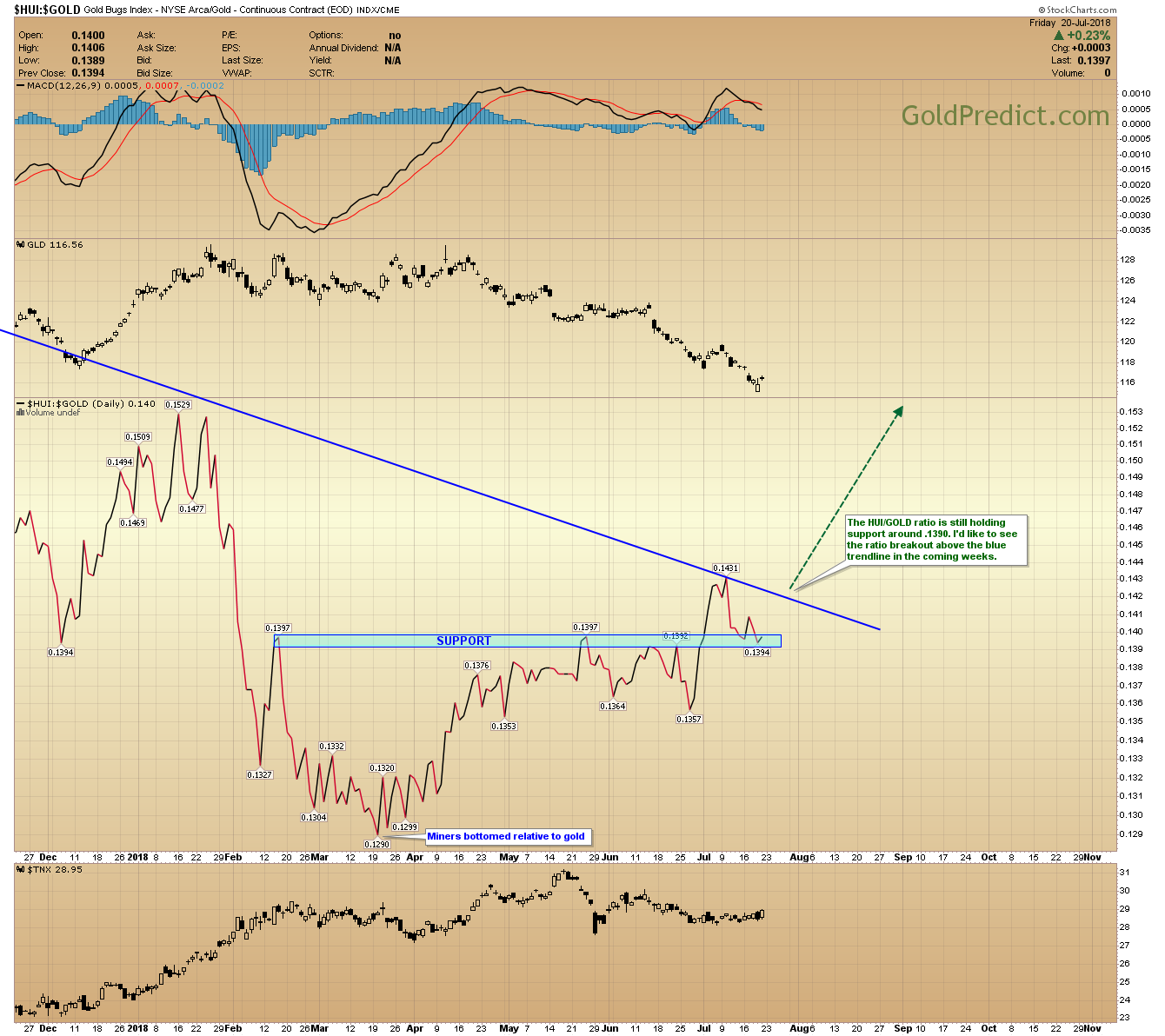 -JNUG- I remain long JNUG. If my interpretation is correct, prices should break above the $15.00 level within the next 1-2 weeks. 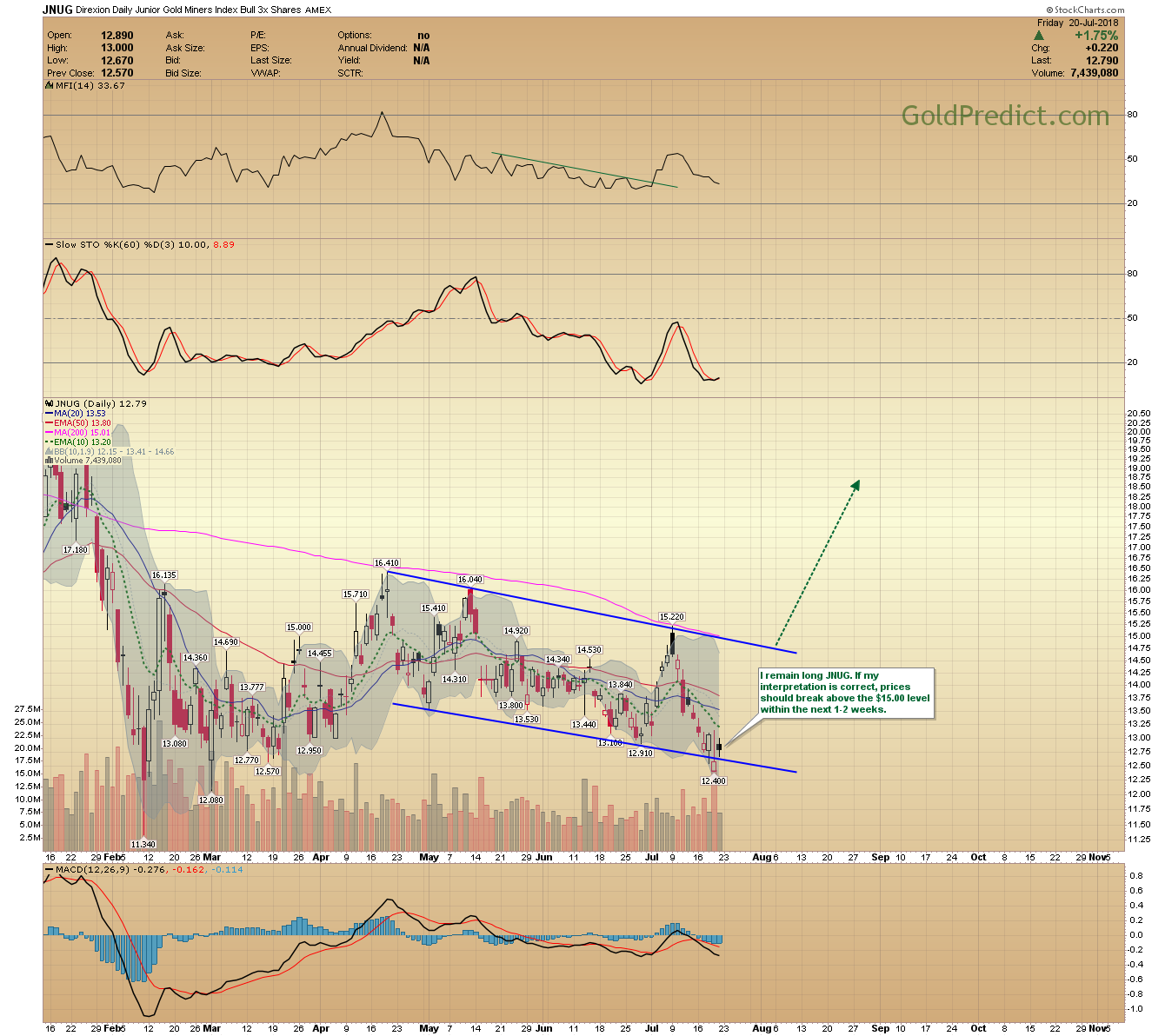 -USLV- I remain long USLV. Prices formed a swing low, and the RSI (14) rose above 30; a bottom is likely. It’s going to take some work, but I expect a rally and subsequent breakout above the blue trendline by September/October. 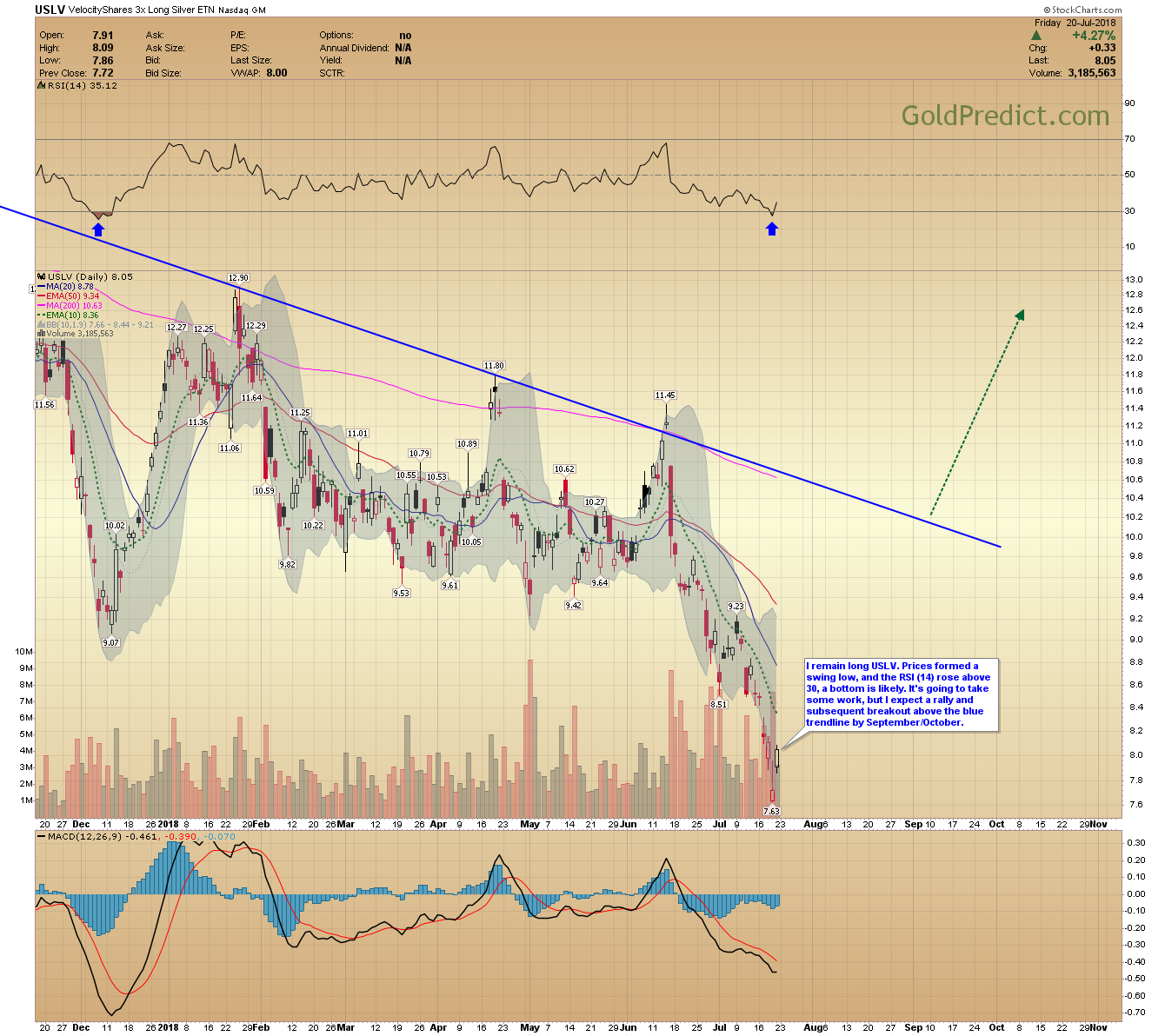 -SPY- Prices formed a swing high, and I think we are close to a top. SPY should come back to (at least) fill the gap at 276. Closing below the blue trendline would support a broader correction into late August – early September. I’m contemplating a short trade or a VIX play. 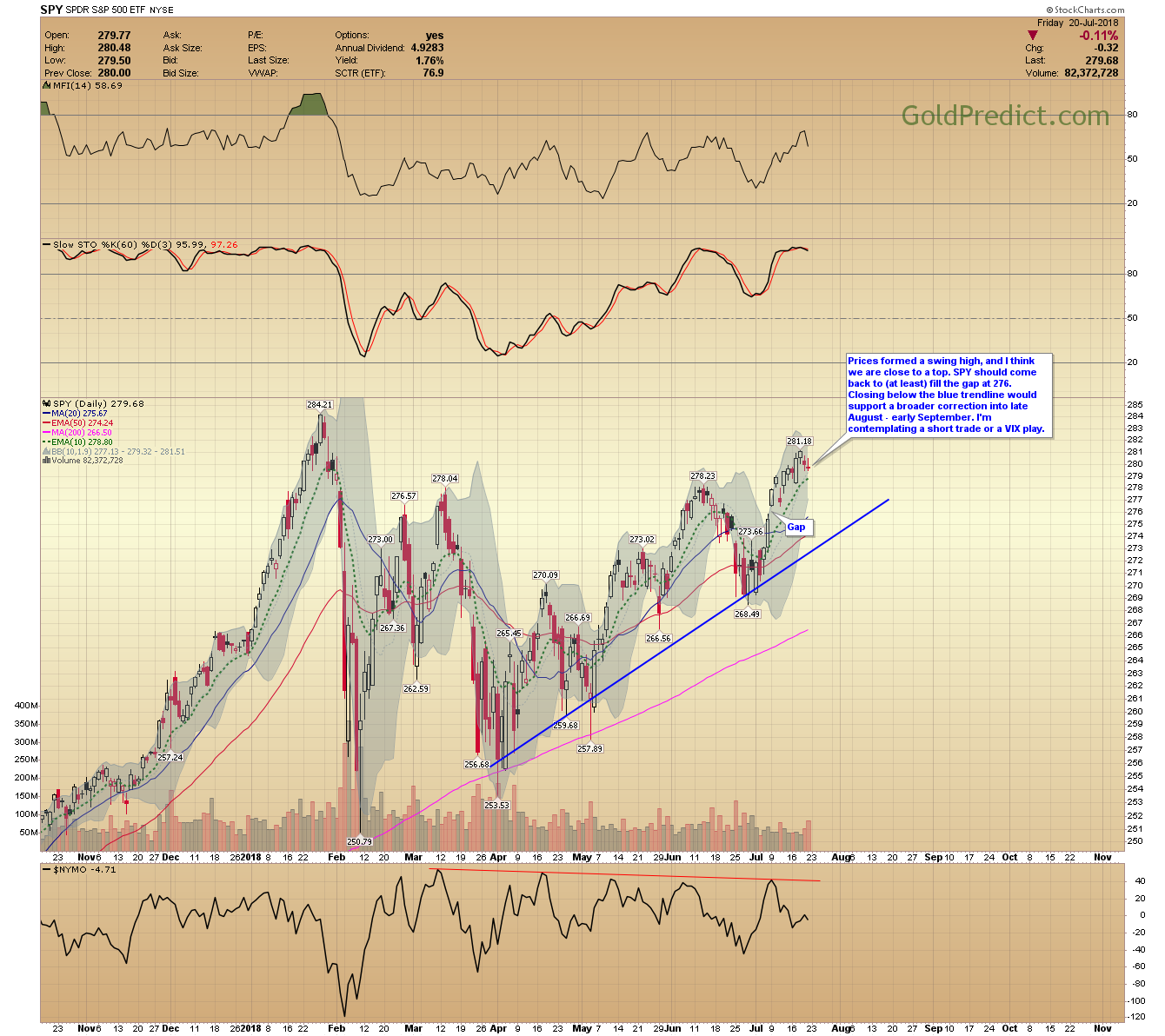 -WTIC- Prices are at a potential cycle turning point, but I’m not convinced oil bottomed. I’ll continue to monitor the action and look for a trade setup. 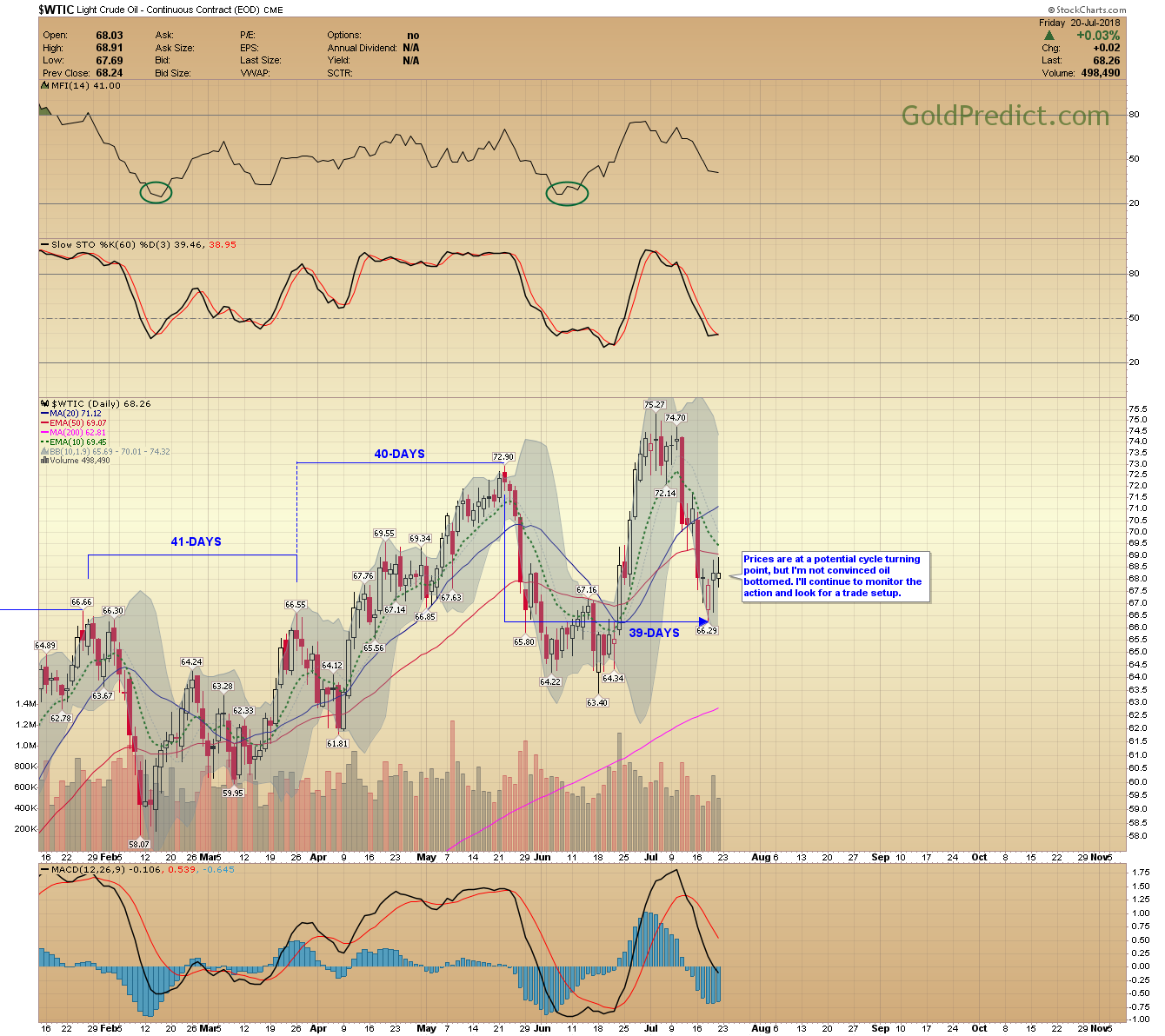 In summary, gold is incredibly ripe for a low. The 3-month decline cleansed bullish sentiment, and bearish calls abound. The COT setup is favorable and comparable with the July 2017 bottom. Platinum is an extreme bargain and $400 cheaper than gold. When considered, the contrarian in me is screaming buy-buy-buy, not sell-sell-sell.

This article was published Posted on July 22, 2018 in Categories Weekend Newsletters