Gold was unable to make any headway going into next weeks Fed meeting…not surprising. Nevertheless, multiple factors continue to support a low.

Below are a chart and snippet from Adam Hamilton’s article “Gold Shorts Near Record!” 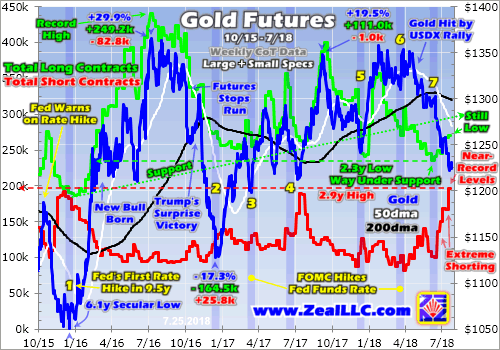 “Last Friday’s latest July 17th CoT report was utterly stunning. In that CoT week speculators sold short an enormous 29.0k additional gold-futures contracts! That was near-record shorting for a single CoT week, ranking as the 6th highest out of the 1020 CoT weeks since early 1999. And that wasn’t even the first near-record shorting this summer! The 2nd-highest shorting ever seen of 35.5k contracts hit the June 19th CoT.

This extreme gold-futures short selling is readily evident in this chart, the vertical leaps in the red total-spec-shorts line in recent weeks. That alone would be super-bullish for gold, as these excessive shorts soon have to be covered and closed by buying offsetting longs. Note again last summer how sharply gold surged when specs rushed to cover their shorts. Their extreme leverage makes short covering self-feeding.”

I couldn’t agree with him more. Speculative shorts are incredibly vulnerable if gold begins to turn higher. They are sitting on a pile of dynamite – all we need is for someone to light the fuse.

Prices will probably remain choppy before Wednesday’s Fed meeting. Miners could drop a little more before reversing. Ideally, gold will stabilize and begin a multi-week advance sometime next week. The next rally could spark massive short-covering. Closing above $1235.20 would support a bottom at $1,210.70. Closing the week below $1210.70 would imply the bears still have the upper hand.

-US DOLLAR- The dollar could either rally back to the 95.50 level (6) to complete the topping pattern or rollover next week and begin to breakdown. I’m leaning toward the latter. Closing above 95.00 will support the former. 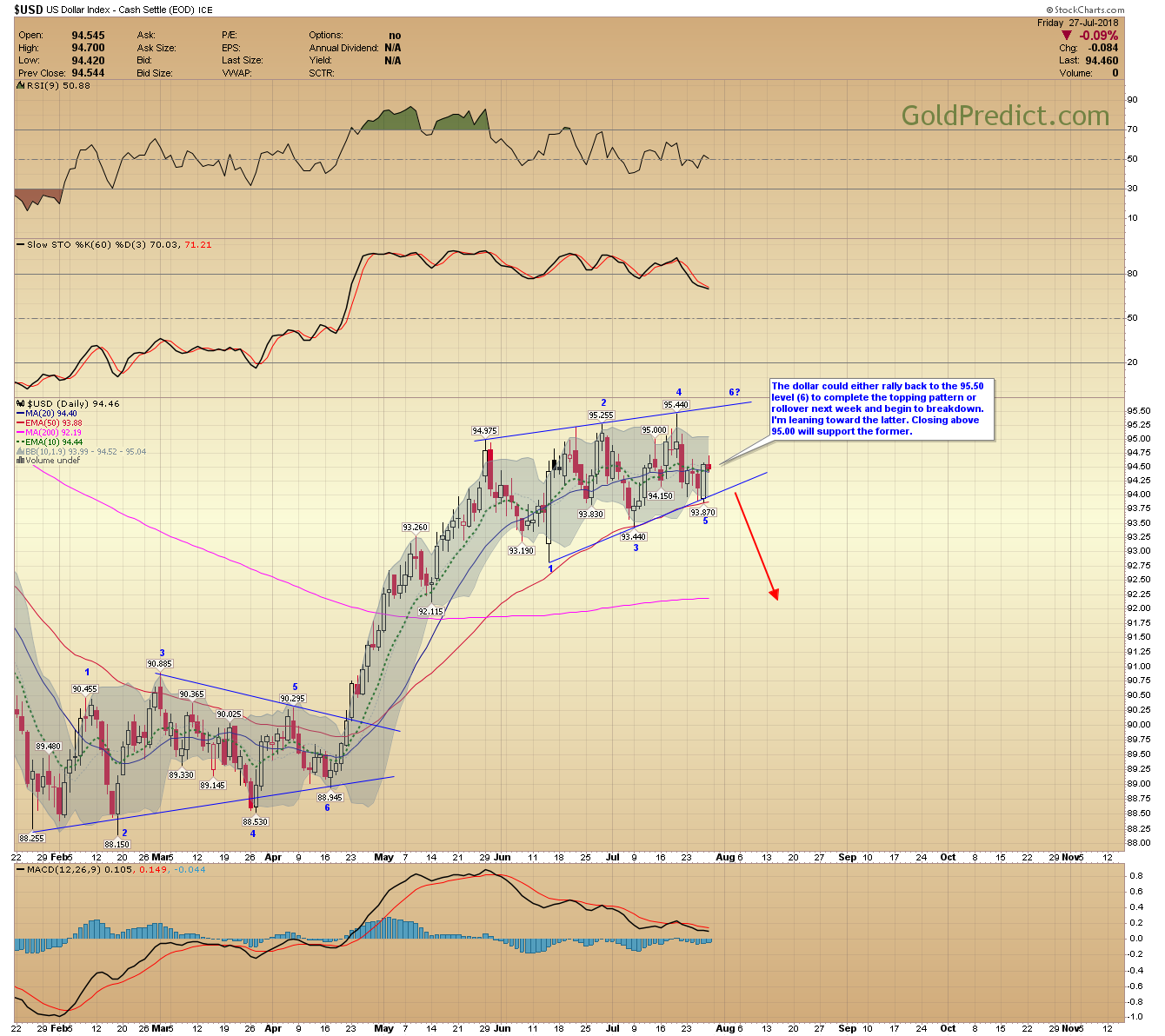 -GOLD WEEKLY- The outside reversal 2-weeks ago failed to produce a bottom. This week gold formed an inside week, another signal that often precedes a trend change. Two or more inside/outside weeks in close proximity describe a changing trend. The December 2016 crash concluded with an inside week.

-GOLD DAILY- I believe prices bottomed last week but were unable to rally before next weeks Fed meeting. A firm close above $1235.20 will establish the 6-Month low. The COT report is incredibly bullish and should support a bottom. 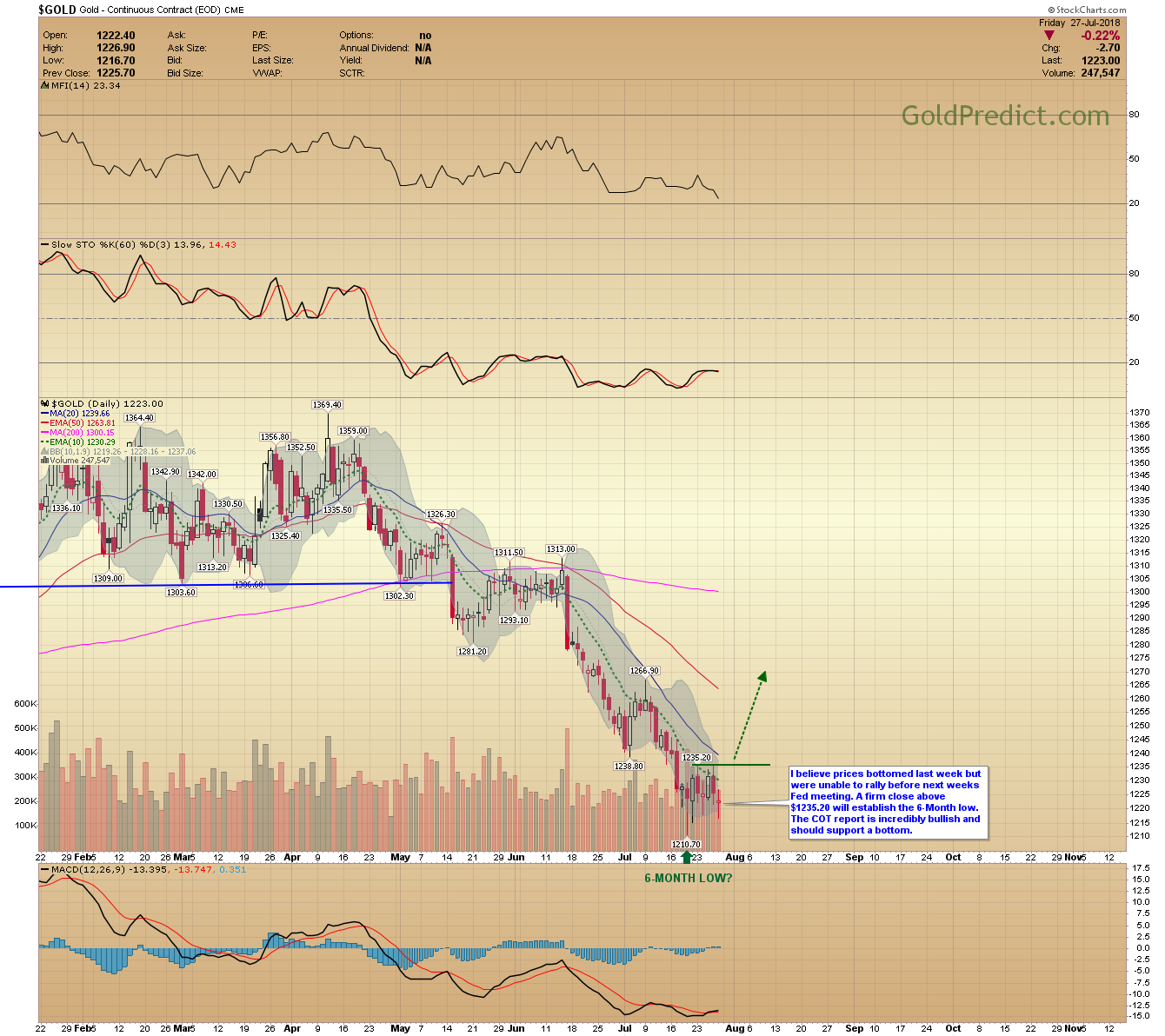 -SILVER WEEKLY- Silver formed an inside week with gold. The commercials reduced their net shorts from -25,065 to -20,025. Prices have declined for seven straight weeks. Occasionally you’ll see prices drop for 4-weeks or even 5-weeks. A 6-week decline is pretty unique. A 7-week decline is rare. Gold declined for 7-straight weeks in 2016 and bottomed with an inside week. 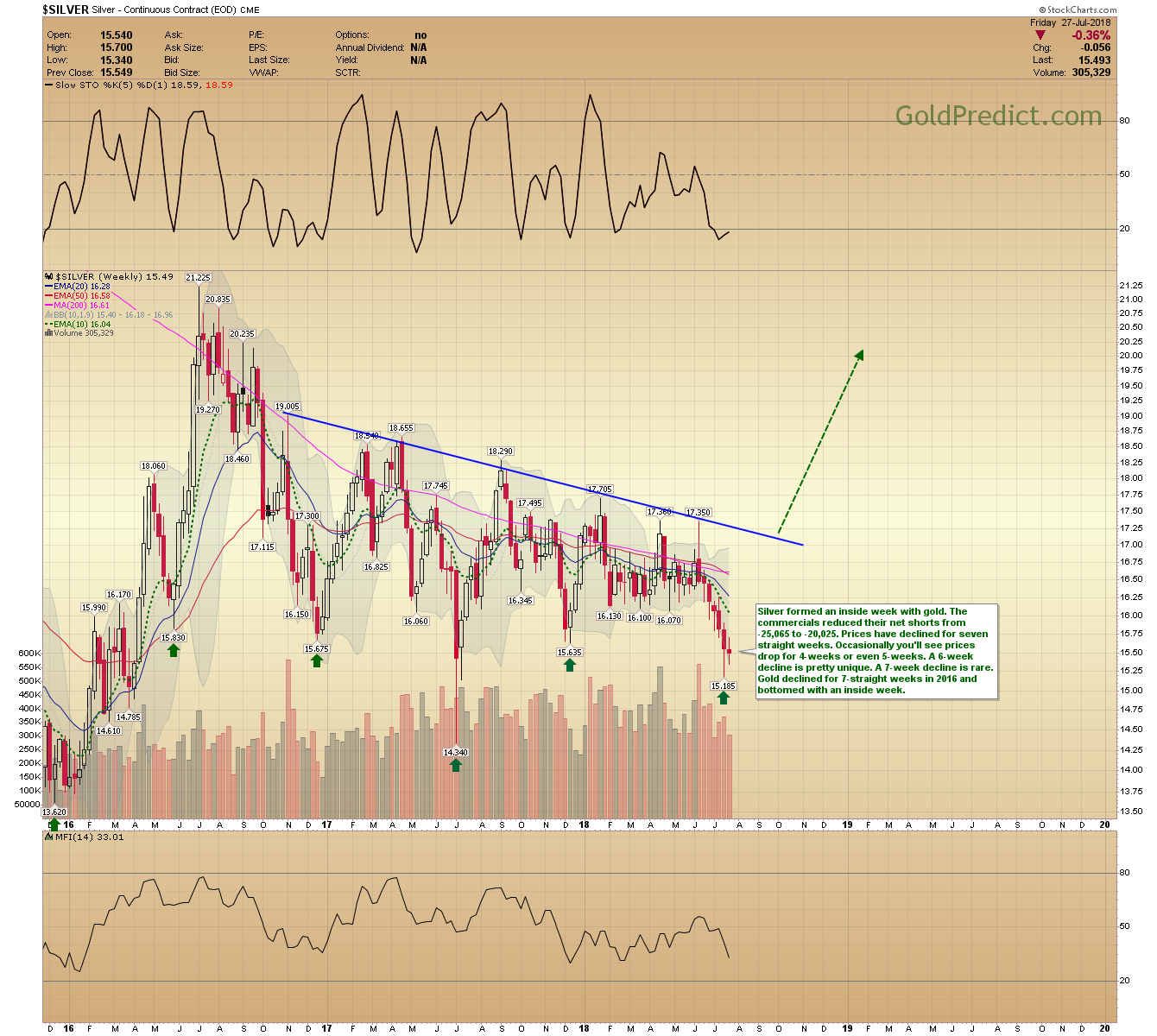 -GDX- It looks like the bears are determined to test the support zone near $21.00. So we could see a little more thrashing next week. The Fed meeting could trigger a rally. A 3%+ up day will signal the onset of the next advance.

-GDXJ- Juniors could drop a little more, but I’d expect to see support come in around $31.25. 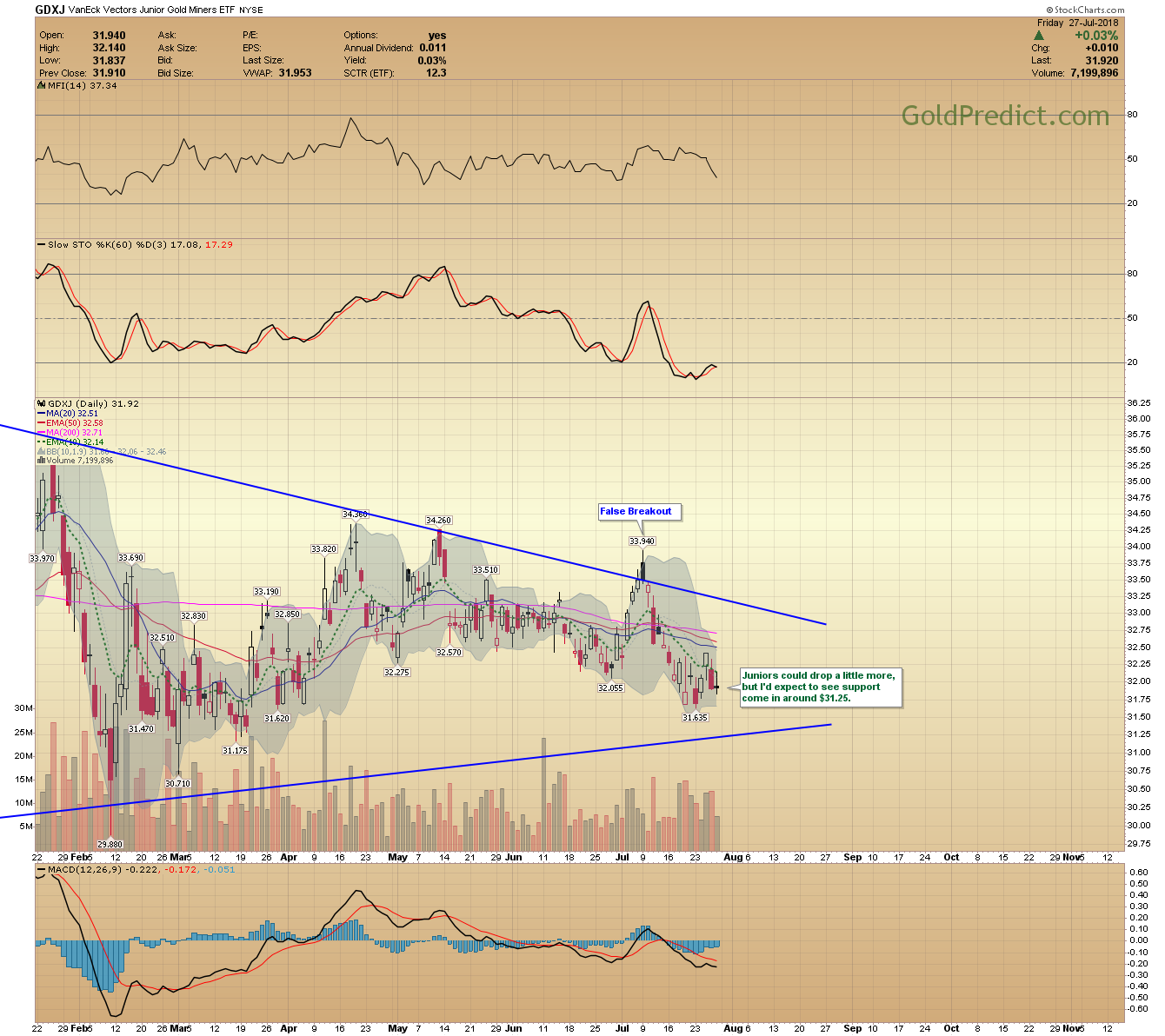 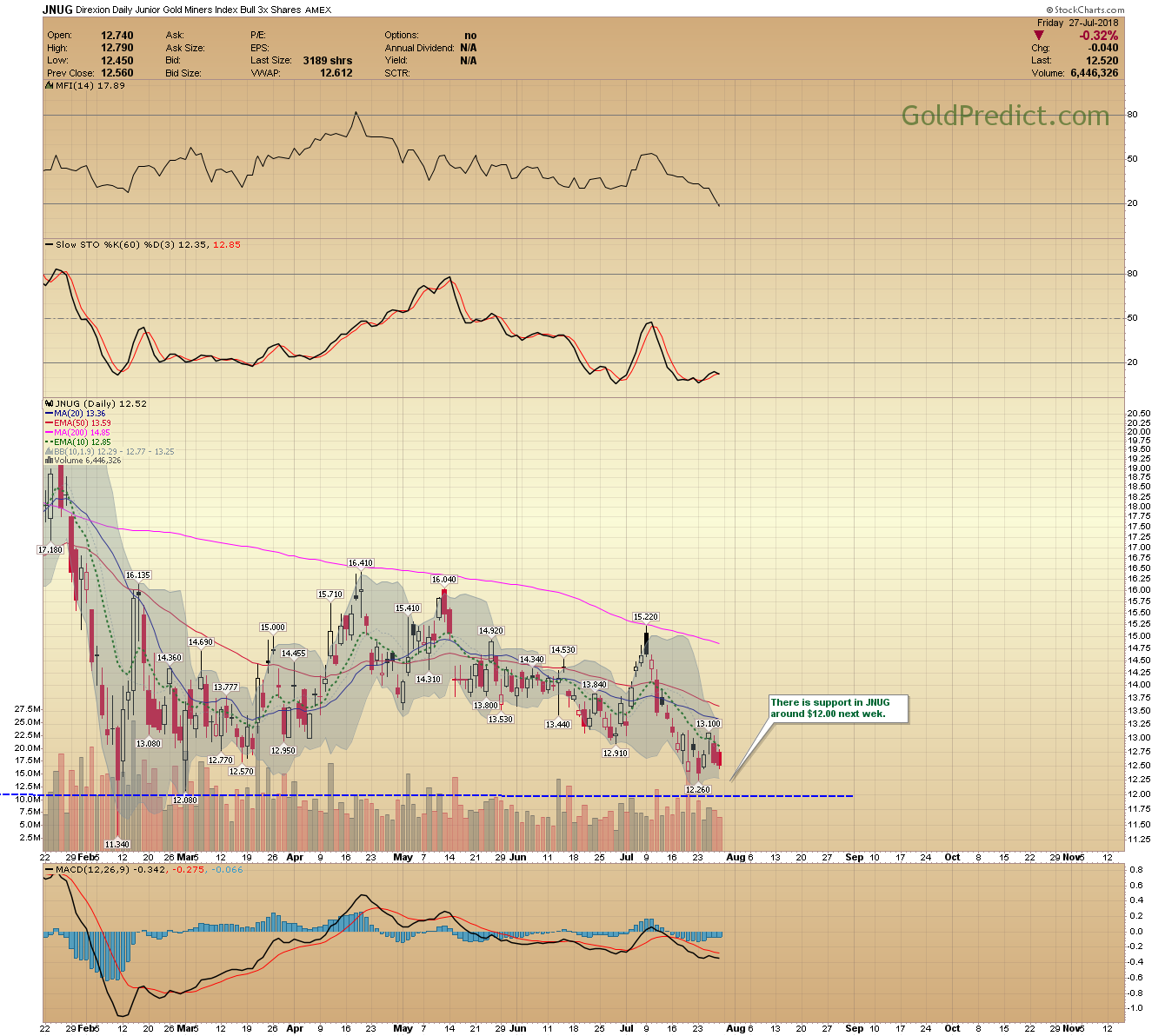 -USLV- Prices have to close progressively above the 10-day EMA to confirm the 6-month low. -SPY- I think stocks are close to a top. The McClellan oscillator (below) continues to weaken, and the VIX (above) failed to make a new low during this rally. I may try a VIX trade (UVXY) next week. 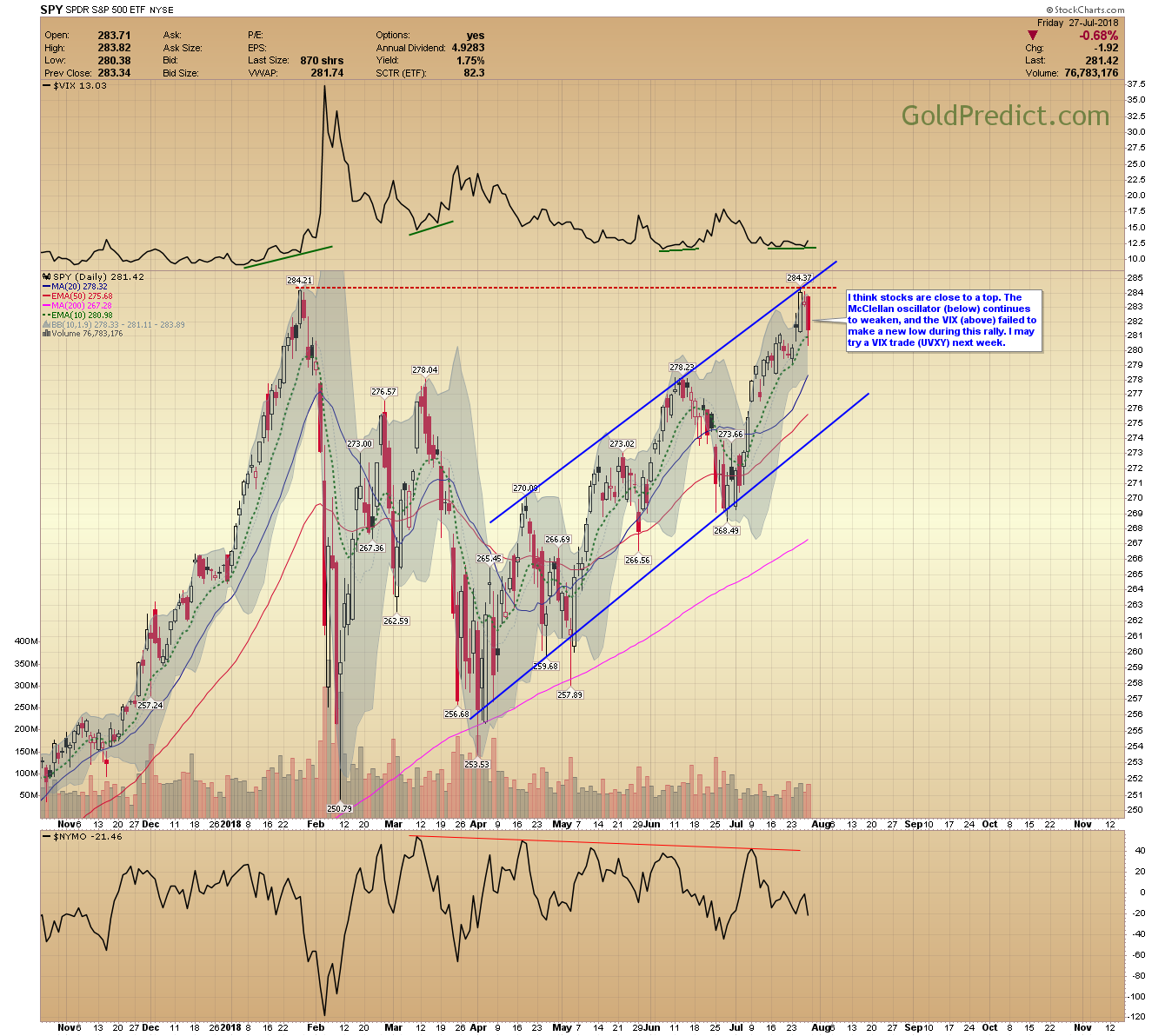 -UVXY- UVXY is a leveraged VIX fund that increases with volatility. I’m considering a small trade anticipating a decline in stocks. 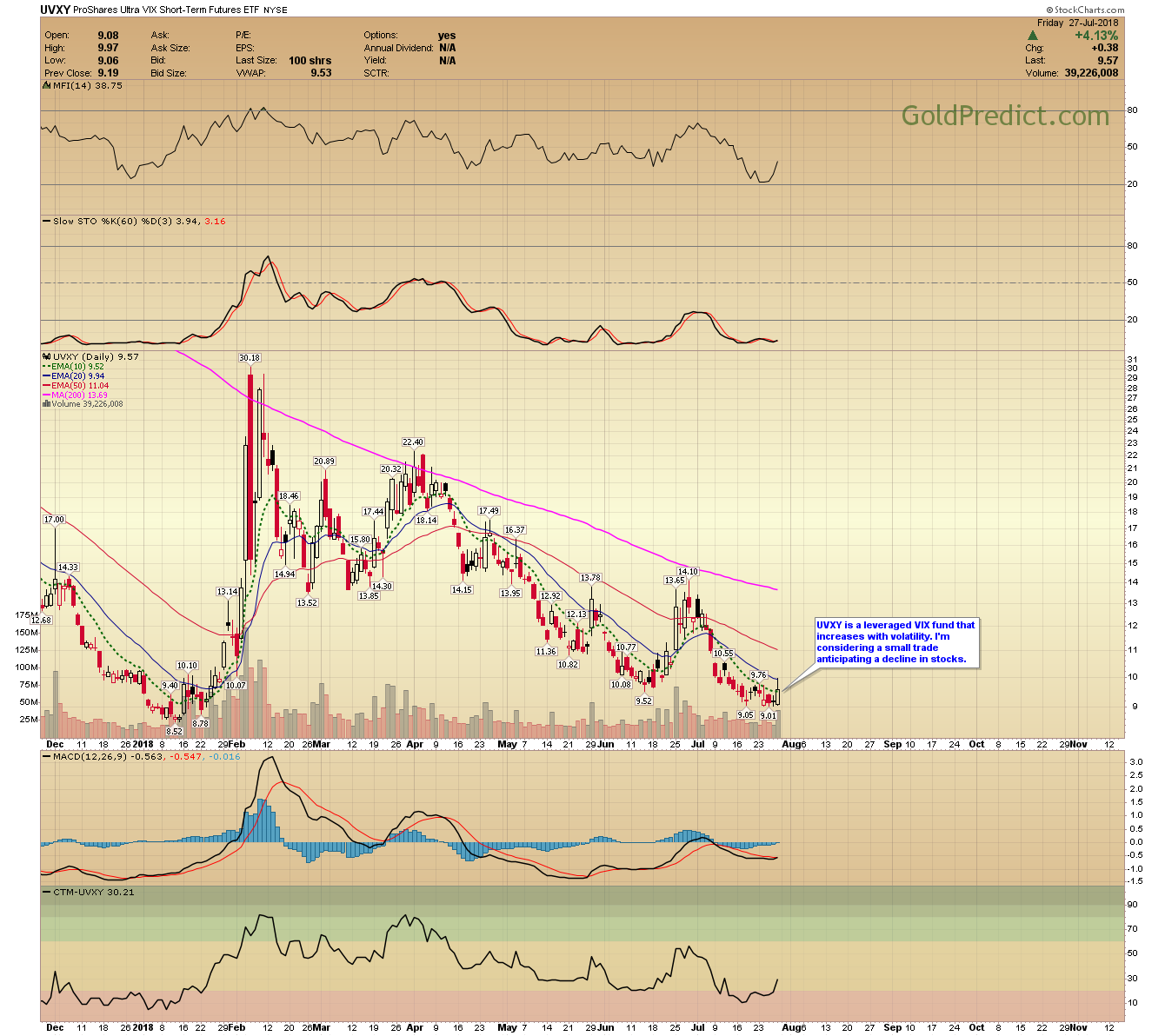 -WTIC- Oil finished lower and formed a swing high. We could see a quick flush out next week (similar to June). I’ll consider a long trade if prices maintain closes above $66.29. 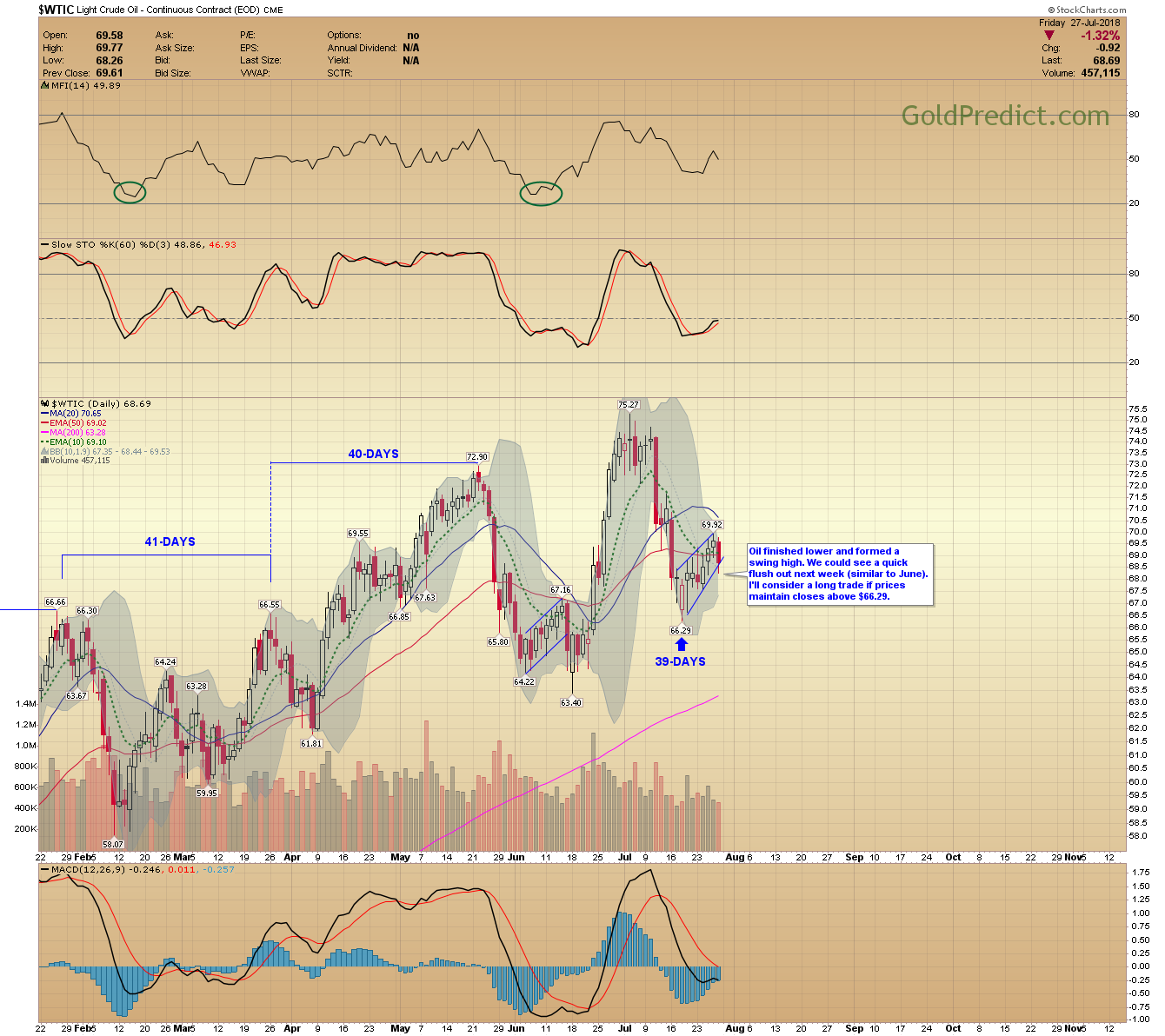 I continue to hold positions in JUNG and USLV. I’ll post multiple updates next week as the action unfolds.

This article was published Posted on July 29, 2018 in Categories Weekend Newsletters