Several markets could be at significant turning points. The stock market (SPY) is pulling back, and I see the potential for a bull trap top and an intermediate-term decline. If established, that could trigger an accelerated breakdown similar to February if key levels begin to fail.

Supporting this breakdown potential is the head and shoulder topping formation in oil. A decline in WTIC below $64.00 would validate the H&S pattern and assign a $55.00 target for October.

A sharp drop in the stock market and oil would presumably be devastating to miners and silver. They act more like financial assets during a collapse while gold often catches a safe-haven bid.

Now – I’m not trying to scare anybody, but I think this is a scenario we need to be prepared for if certain levels are broken.

On the bullish side of things, the Dollar is yet to confirm a cycle low, and gold is holding the $1167 low. If miners rally early next week, I can make a case for a double bottom in GDXJ and undercut low in GDX. If established, I’ll exit my net-short position and prepare for a snapback rally to (at least) the 50-day EMA’s.

At some point, big money will see value in this sector. I’m not sure when or at what level but eventually prices will be too low to ignore.

-DOLLAR WEEKLY- The Dollar needs a weekly close below 95.00 to establish an intermediate-term correction. Precious metals and miners will remain under pressure until that occurs. 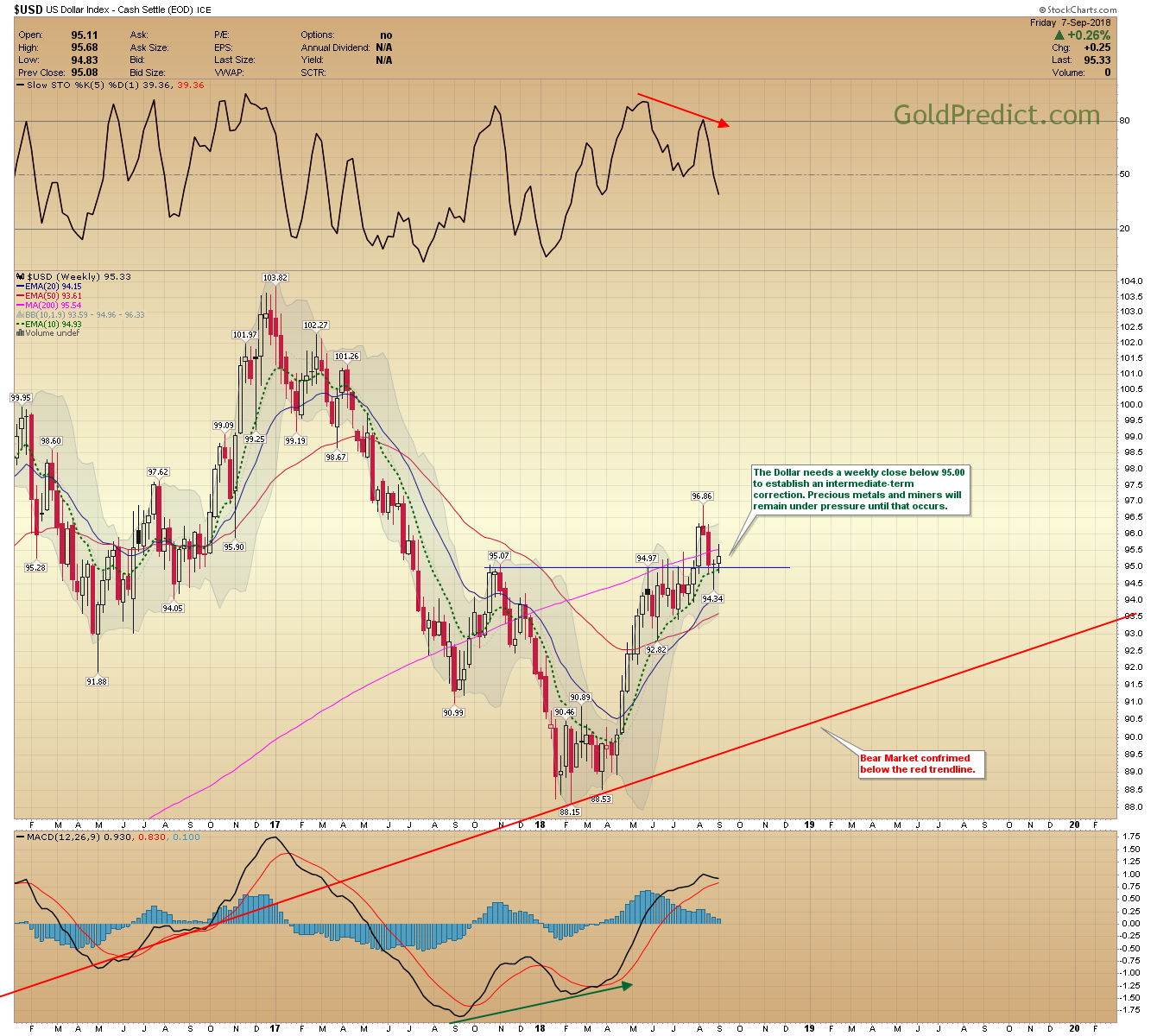 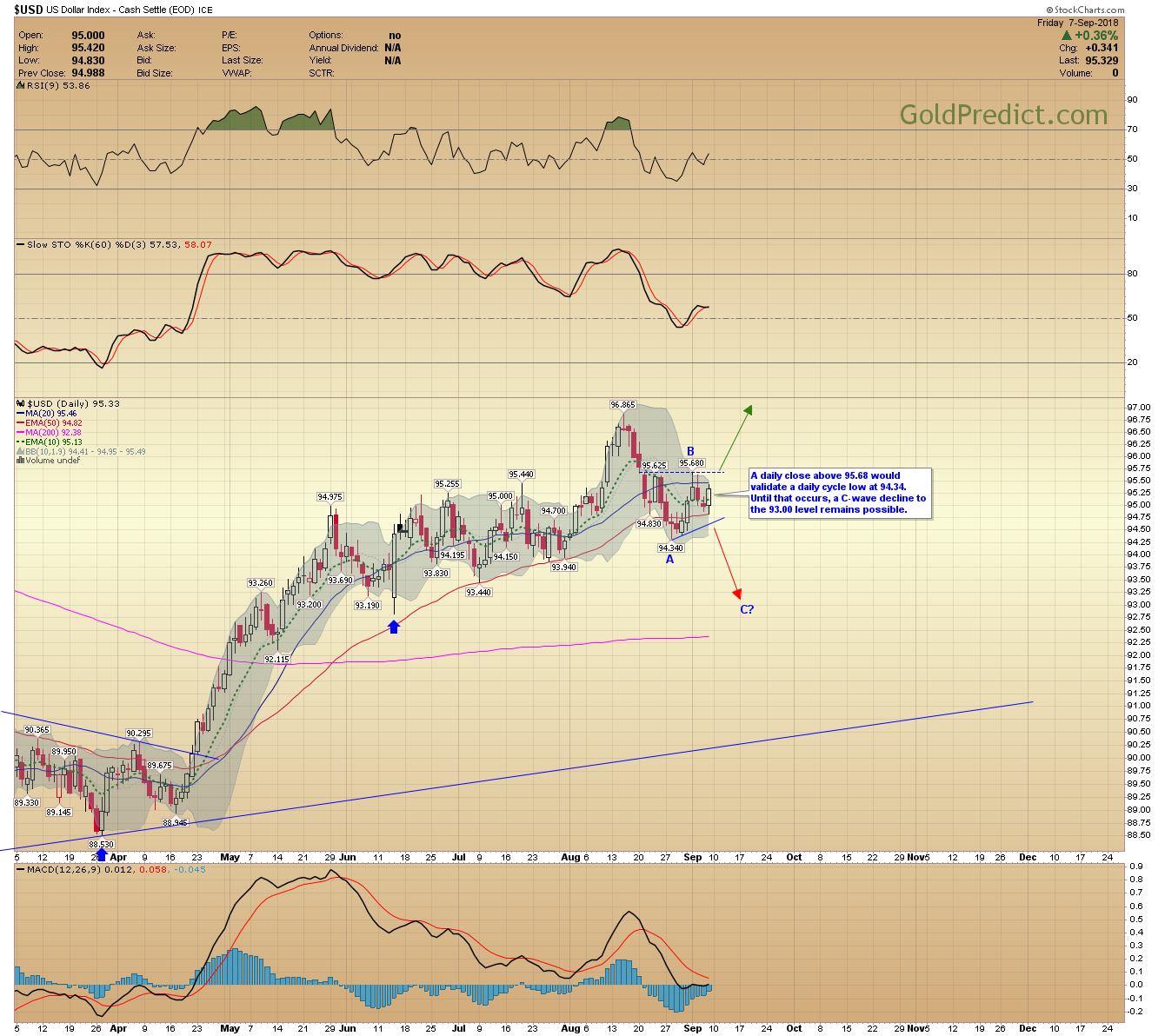 -GOLD WEEKLY- It’s been 3-weeks since gold hit $1167. Prices need to close above the 10-week EMA ($1222.31) to support an intermediate-term cycle low. Until that occurs, I think we need to be prepared for more downside. Commercials are net-long for the first time since December 2001. 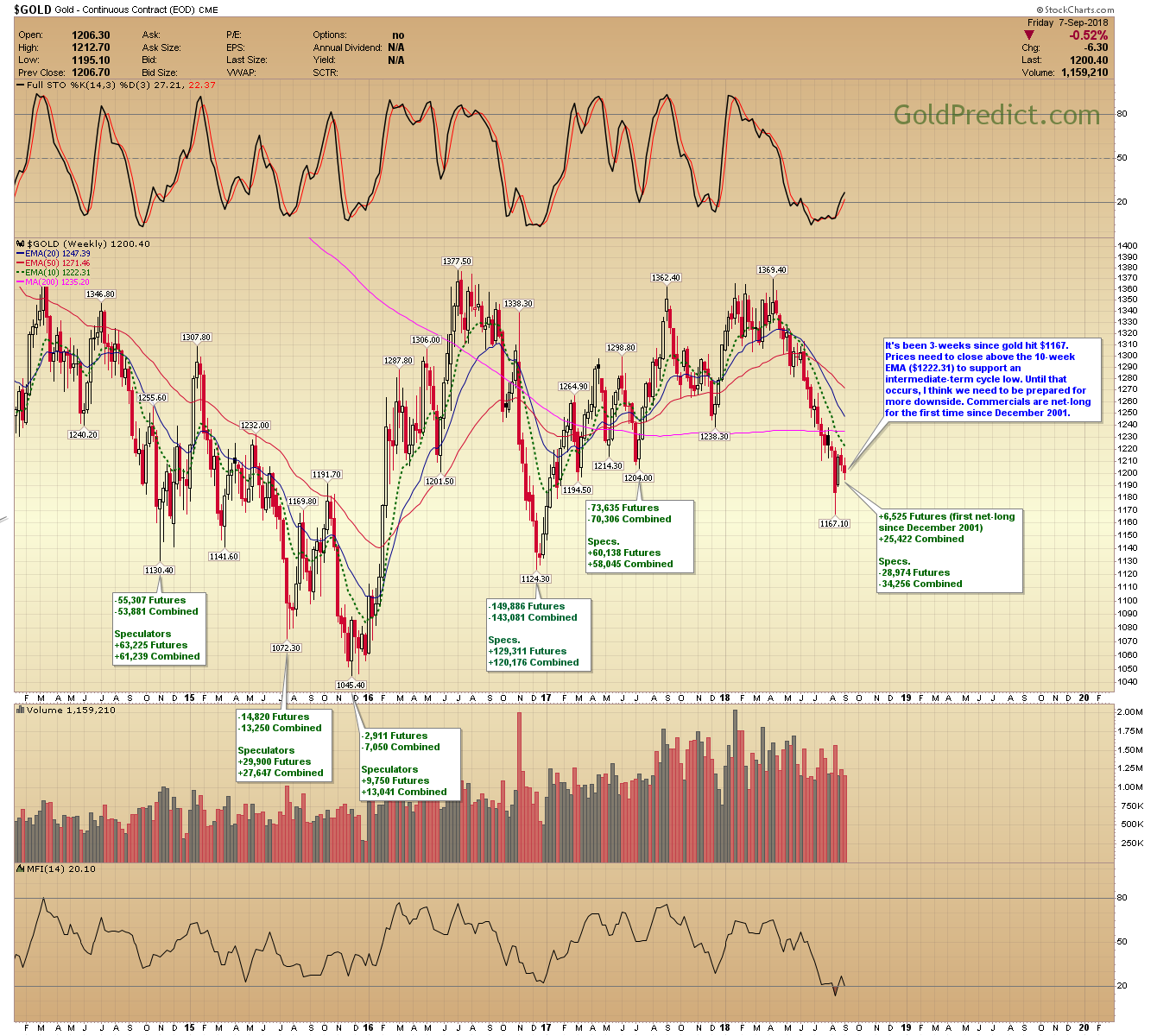 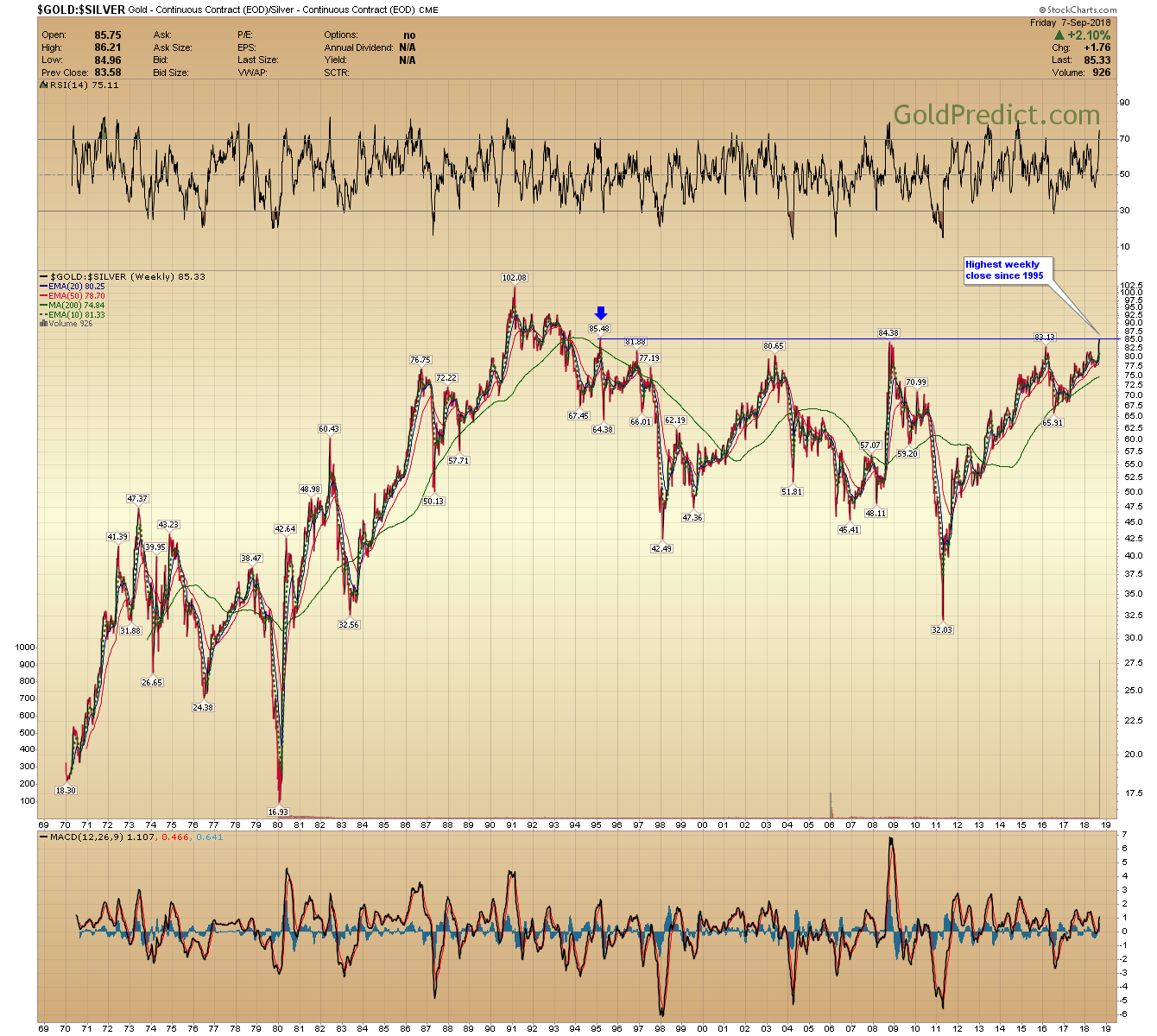 -SILVER WEEKLY- I love silver as a long-term investment, but the weekly chart is in trouble. On the bullish side of things we are already at extremes – commercials have their first net-long position ever, and the gold/silver ratio is at levels not seen since 1995. However, there is little price support if prices break decisively below $13.62. Consequently, cutting sharply through $13.62 could trigger a selloff to $12.00 and even $10.00. 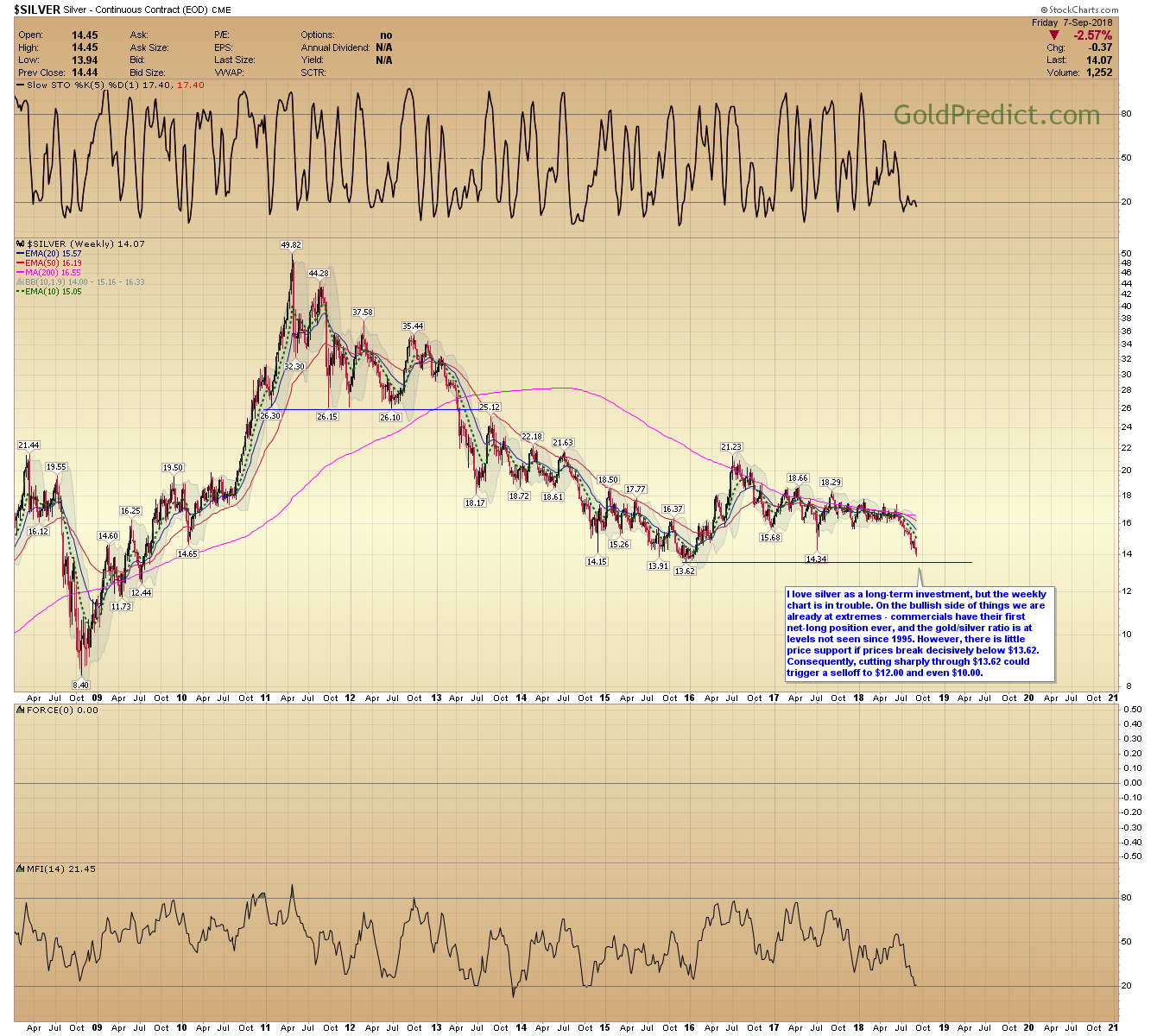 -SILVER DIALY- Prices are down nearly 20% from the June $17.35 high. The relentless selloff hasn’t made much sense, but that doesn’t mean it’s over. The $13.62 level could be tested next week. A severe breakdown through that level could trigger a sharp collapse. 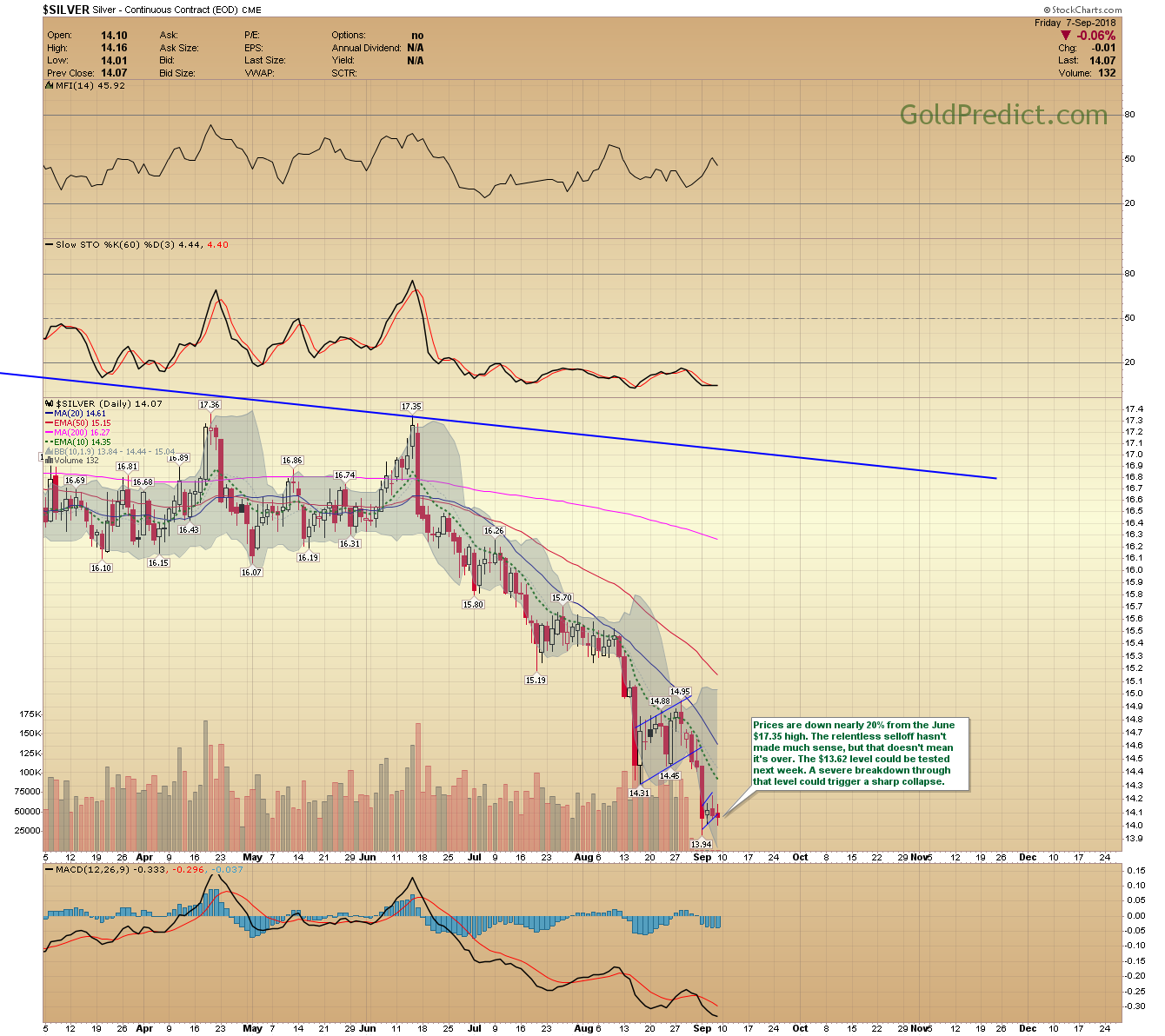 -GDX- Miners would have to close above $18.01 and then $18.16 to support an undercut low. If established, I’ll reduce my hedge and go back to net-long. Closing below $17.58 would prompt more downside. 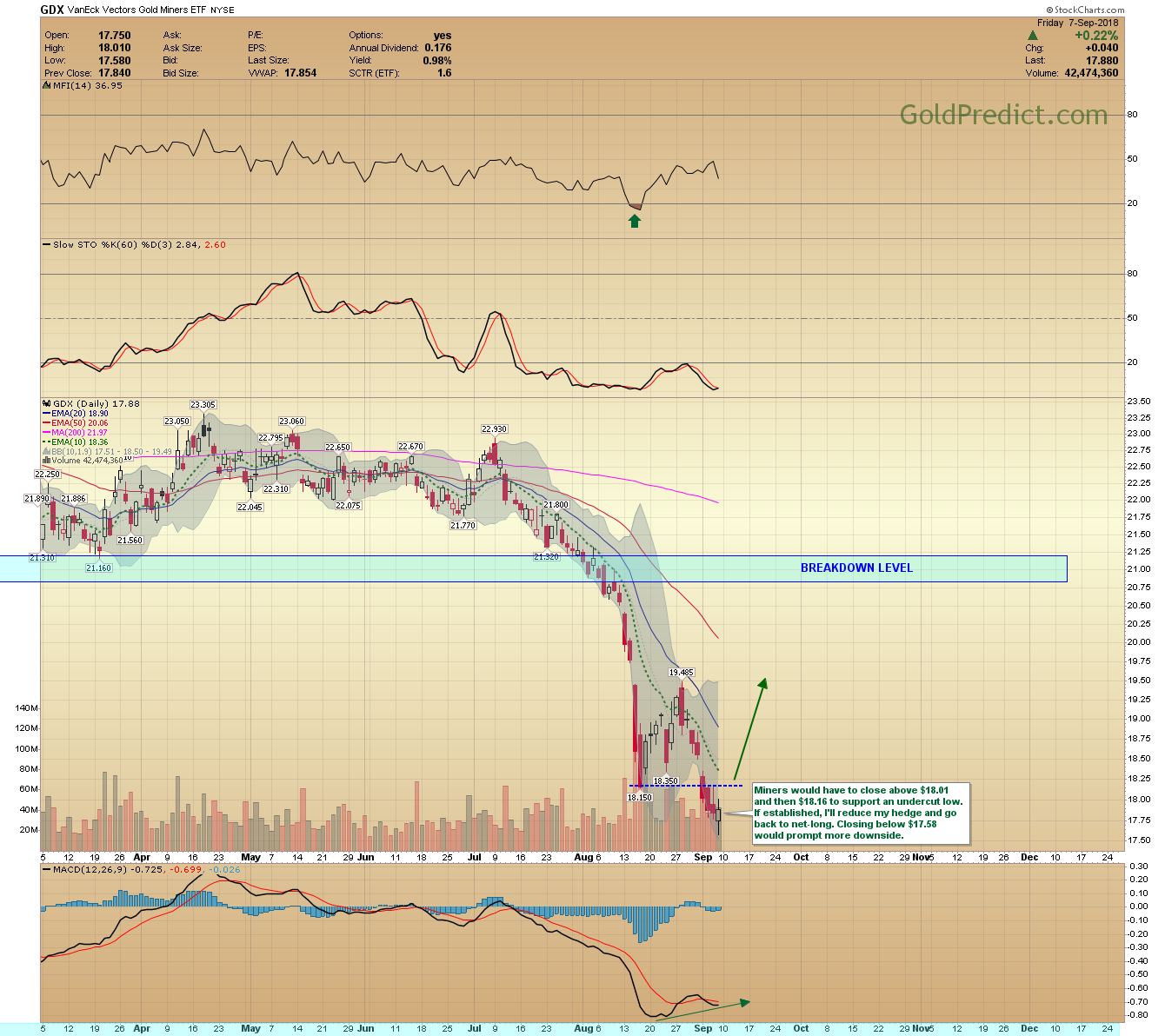 -GDXJ- We could have a double bottom in juniors if prices close above last weeks gap. Closing below $26.47 would decrease that possibility. 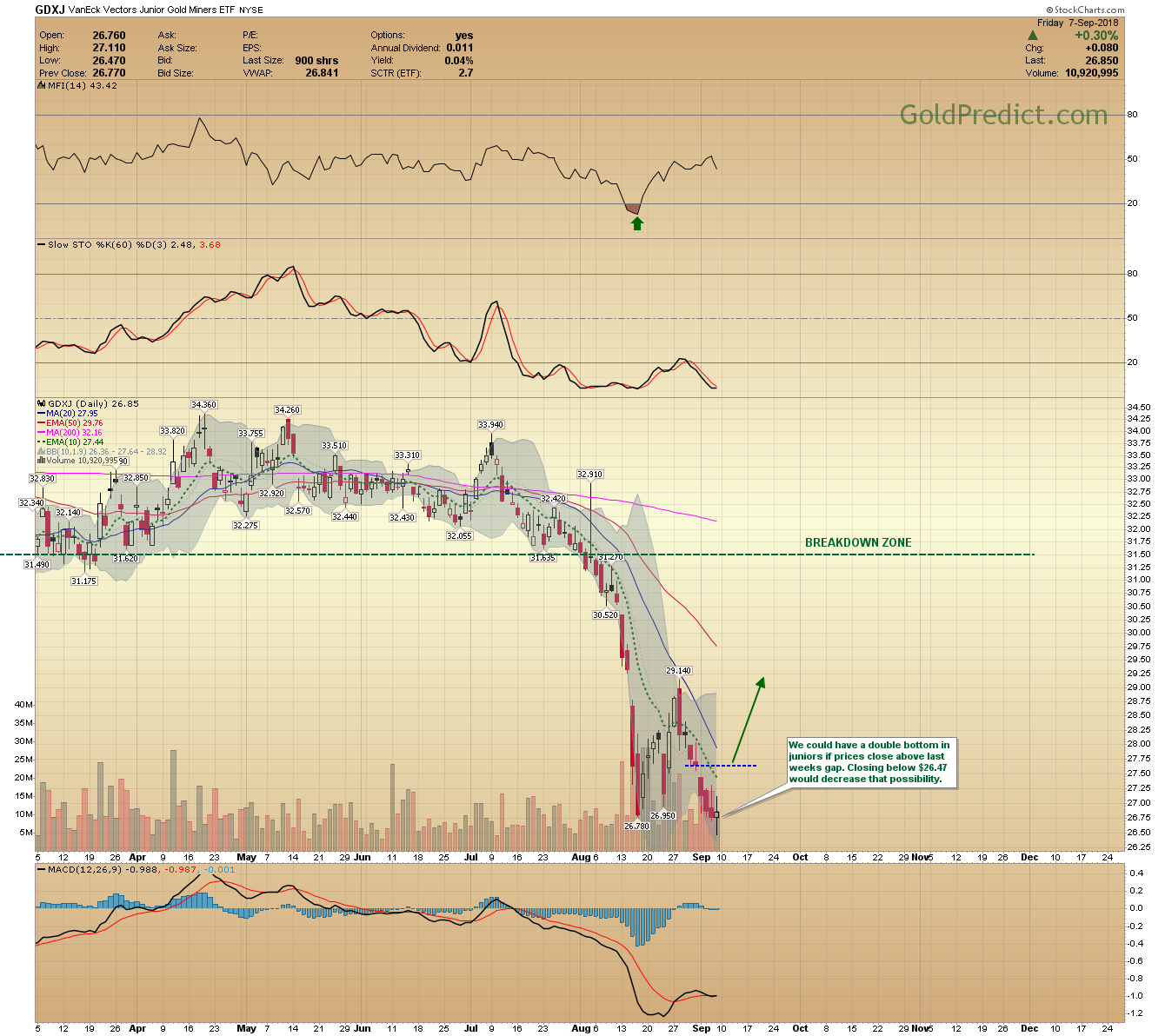 -SPY- Prices closed below the gap, but the 20-day EMA has held. Stocks could be starting an intermediate-term decline. Closing below the 284 breakout point and the 50-day EMA could trigger a sharp collapse (similar to February). If established, that would likely put additional pressure on silver and miners. Gold may catch a safe-haven bid. SPY would have to break above the potential bull flag and close above 289.50 to recommend more upside. 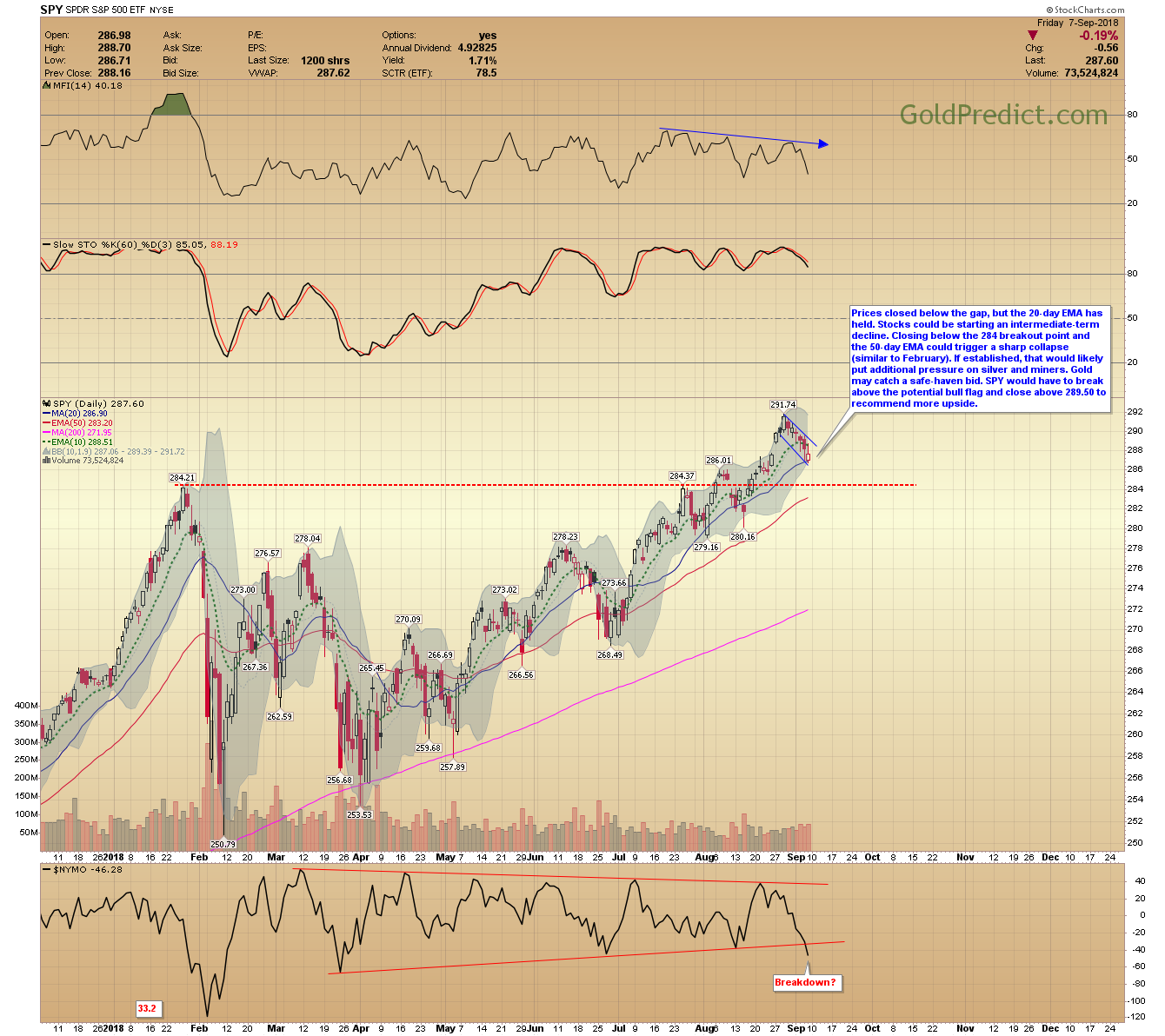 -SPY WEEKLY- There was a rare weekly gap fill. Closing below the 10-week EMA (283.65) would support a bull trap and intermediate-term decline. 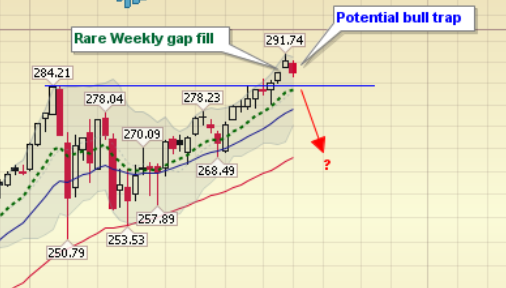 -WTIC- Prices are trying to hold the 20-day EMA. I think the next cycle truing point will arrive next week between the 12th and 14th. The structure for a head and shoulder top looks complete if the $71.40 high holds. Closing below the neckline in the coming weeks would confirm the pattern and support a decline to $55.00 in October. 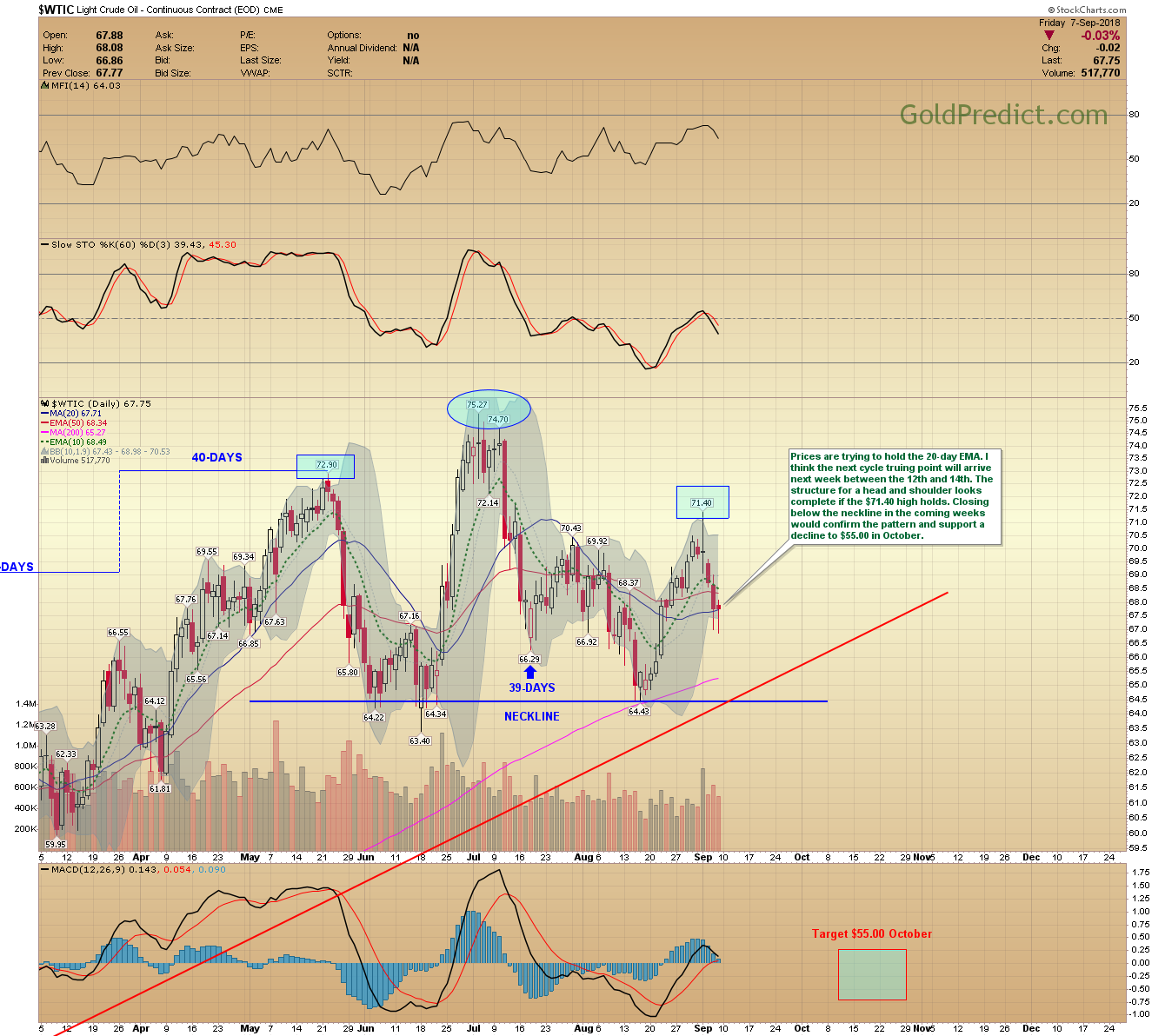 This article was published Posted on September 8, 2018 in Categories Free Updates, Weekend Newsletters