The November 6th elections will influence investment decisions, and money flows for the next several months. There are two potential “extreme outcomes” that would potentially cause the greatest shift in financial assets.

Now – those are the extremes. The probabilities say we land somewhere between with the Democrats controlling the House and Republicans the Senate.

Metals and Miners consolidated throughout the week. Their short-term structures resemble bullish consolidations that favor breaking higher. However, I don’t think we will see a sustained multi-week trend until after the elections.

-US DOLLAR- The dollar is testing resistance at 95.75. I see the potential for an inverse head and shoulder consolidation pattern. Consecutive closes above the neckline would signal a breakout to target the 98.00 level. A breakdown and close below the 94.47 low (right shoulder) would imply a failed cycle and propose a deeper correction. 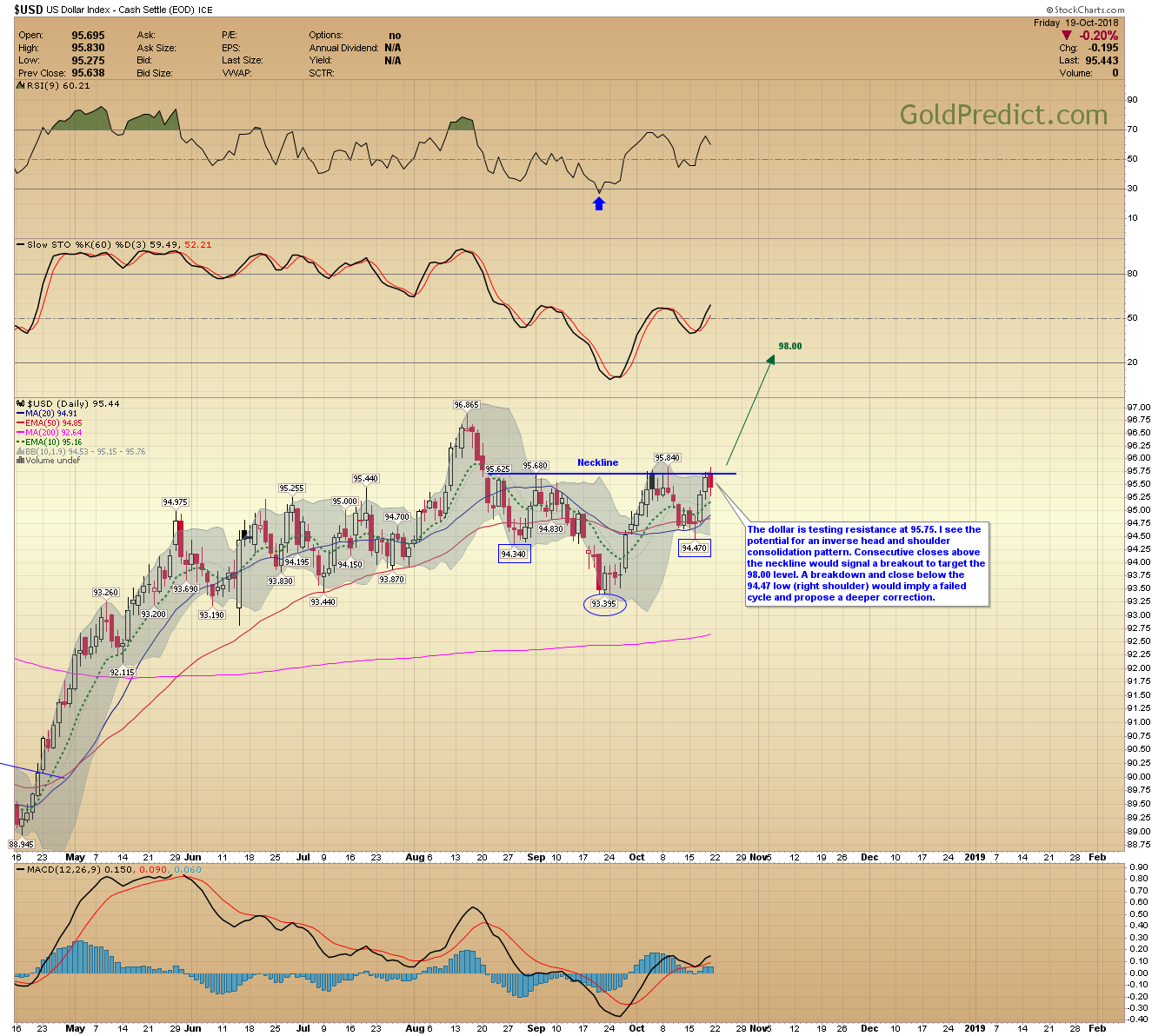 -GOLD- The November 6th election will determine gold’s next move.

I see two scenarios playing out – One bullish…one bearish.

The seasonal pattern favors a bearish conclusion: Over the last 5-years gold prices peaked in mid/late October, declined in November and bottomed in December. At some point, this pattern will not repeat. But until then, I think we should favor a bearish November.

It should be clear which scenario is playing out a day or two after the election. We may get some clues leading to the election as well.

-SILVER- The pattern in silver is similar to that of May/June. Breaking below the trendline would recommend a test and potential breakdown below the $13.62 low set in 2015. It would take a sustained post-election rally above the 200-day MA to promote a new bullish advance.

-GDX- Miners are producing a small consolidation pattern that should break higher. Likely target around $21.00. Similar to Gold, the November elections will decide the next trending move in miners. A bullish outcome for gold would likely trigger a post-election breakout in miners above the blue trendline. A bearish result would constitute a trendline breakdown with bearish follow-through into December. Note – The green arrow represents the potential bullish crossover point of the 20/50 day EMA’s. That is key support going forward. Any close below that level (call it $19.25) would support a breakdown in price.

-GDXJ- It looks like a small bull flag is forming. I’m expecting a breakout or breakdown in November. The ideal target box for an October top resides between $30.50 – $31.50. It would take a post-election rally above $32.50 to suggest a significant bullish breakout. 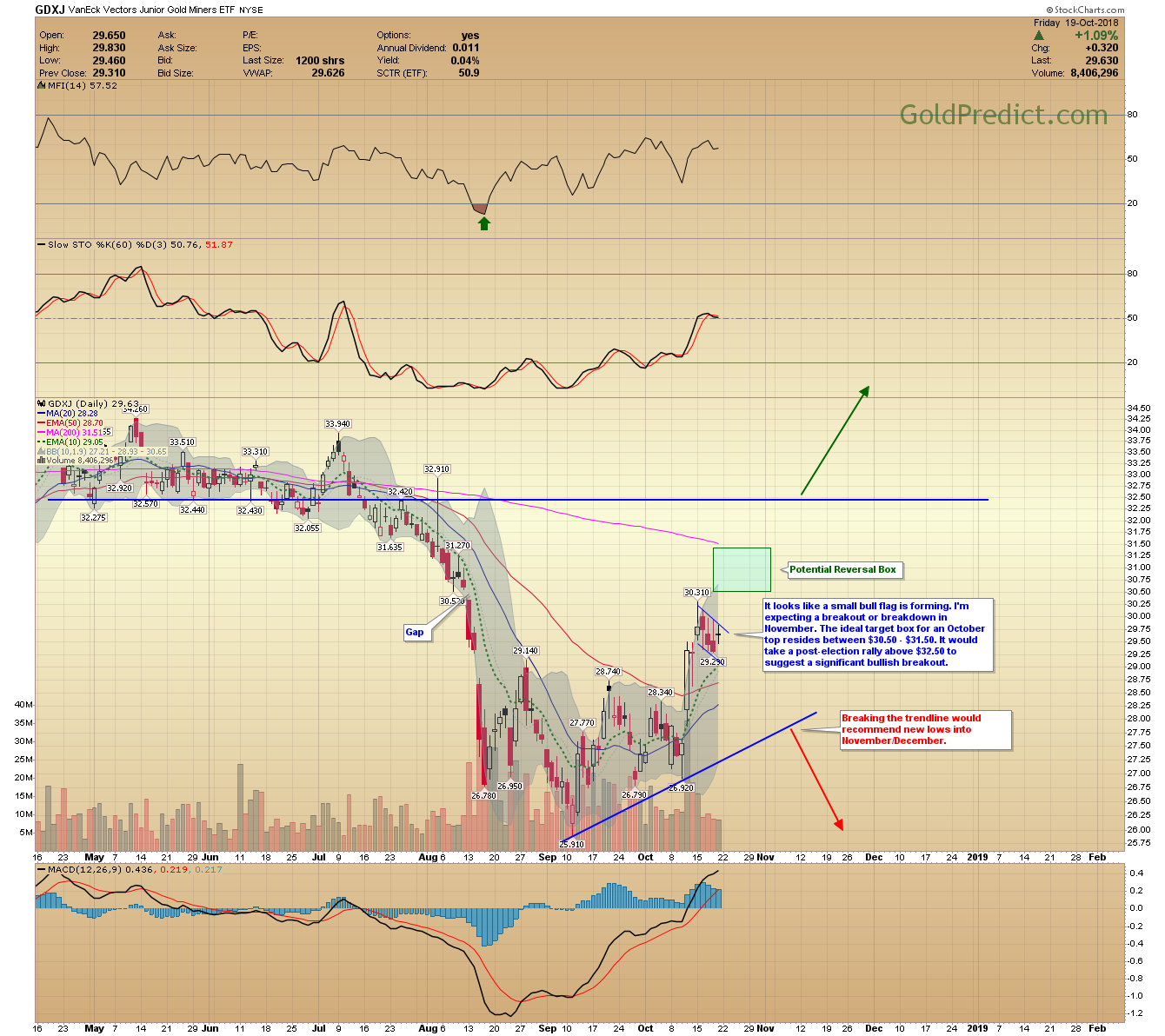 -SPY- I’m bullish on the stock market and don’t expect a major top until 2019/2020. I think prices are close to an intermediate low. However, the bottoming process could drag out until the November elections. Over the next week or two, I’ll look to build long positions in stocks anticipating a rally into year-end. 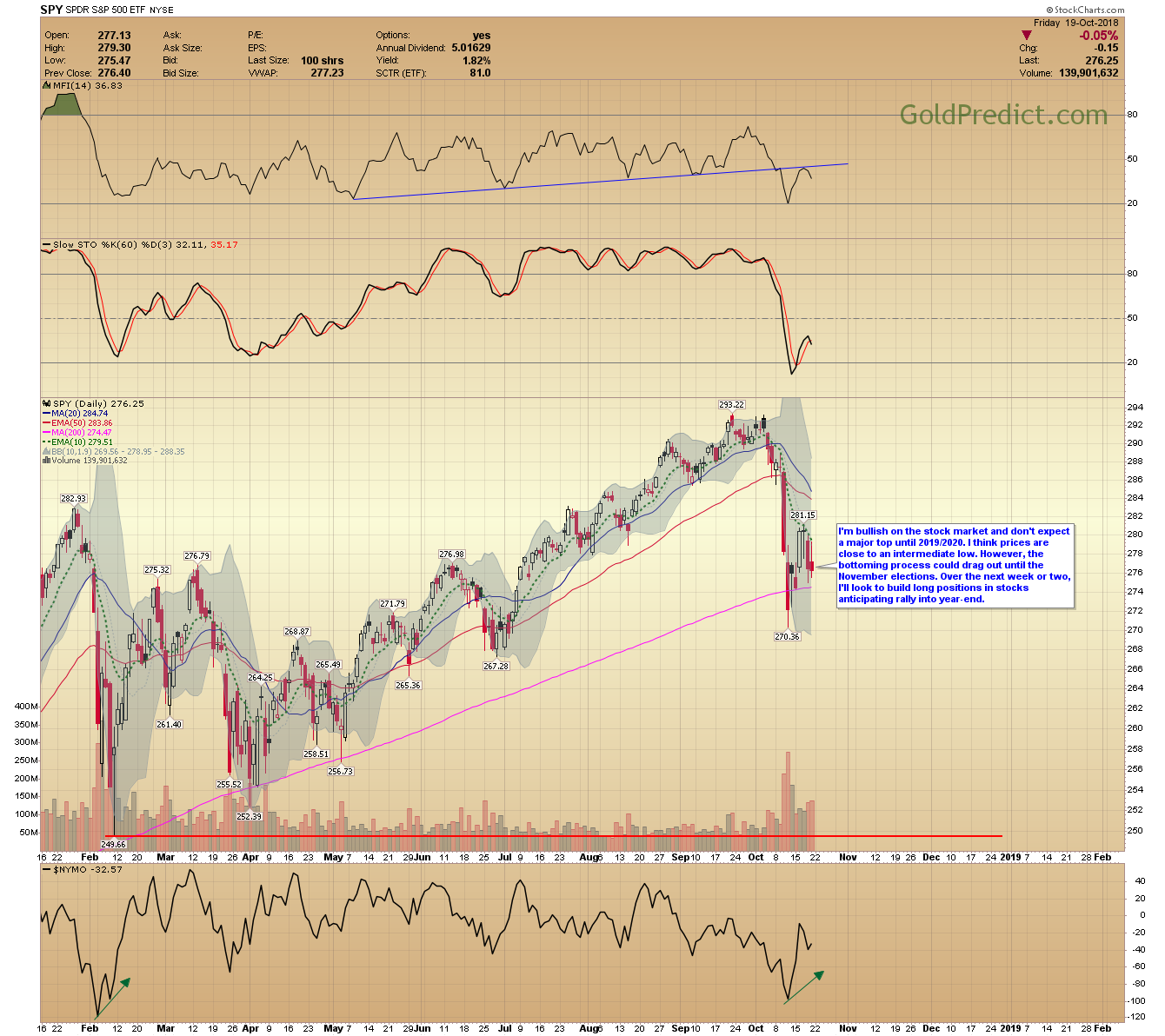 -WTIC- I think oil is working on a bottom. We could have one more drop that tests the 200-day MA. Energy stocks may perform well into year-end if petroleum and stocks bottom as expected. 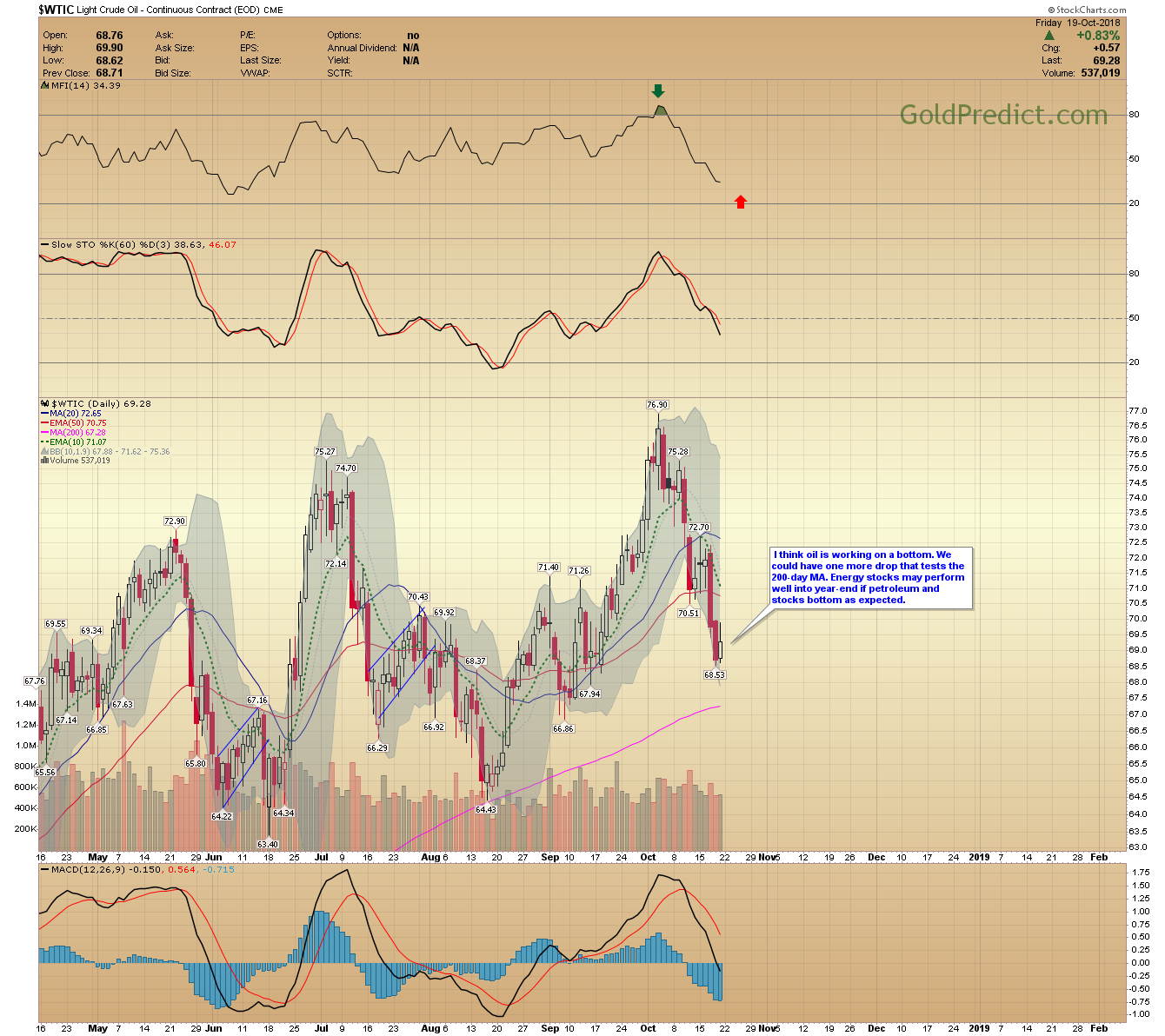 I don’t see a medium-term trading advantage before the elections. However, I may try and play an upside breakout of the bullish consolidations in miners depending on Monday’s price action. I’ll monitor the structure and update members tomorrow.

This article was published Posted on October 25, 2018 in Categories Weekend Newsletters