This is starting to feel like a repeat of the 2016 elections, financially speaking. Nervous capital exited the stock market in September/October 2016 before the elections. Gold rebounded in October 2016 as a safe-haven. Trump won, fear collapsed, and money rushed back into stocks and out of gold.

We see a similar setup this year between stocks and gold. The question is will we get the same results. I think it depends on the polls. If the Republicans maintain majorities in the House and the Senates, then yes, I think the stock market rallies sharply, and gold falters into the December rate hike. If the Democrats take the House and the Senate, then stocks may remain weak, and gold could flourish. A split House and Senate will probably produce mixed results.

Some are calling for a new bear market in stocks. I just don’t see it yet. The yield curve hasn’t inverted, and the 10-year only reached 3.25%. I’d be stunned if that was enough to push the US into a recession with Q3 GDP growth at 3.5%. I think stocks will reach new highs next year and probably rollover in late 2019 or early 2020.

It looks like miners reached October tops on Tuesday and they may be leading metals lower. Gold could remain buoyant as a haven until the stock market begins to stabilize. Metals could spike to fresh cycle highs as we approach the elections.

-YIELD CURVE- Typically, the stock market tops several months (average ten) after the yield curve inverts. The yield curve has not inverted. Though we’ve seen a shift in the discretionary versus staples indicator (bottom indicator) the ratio remains in positive territory. 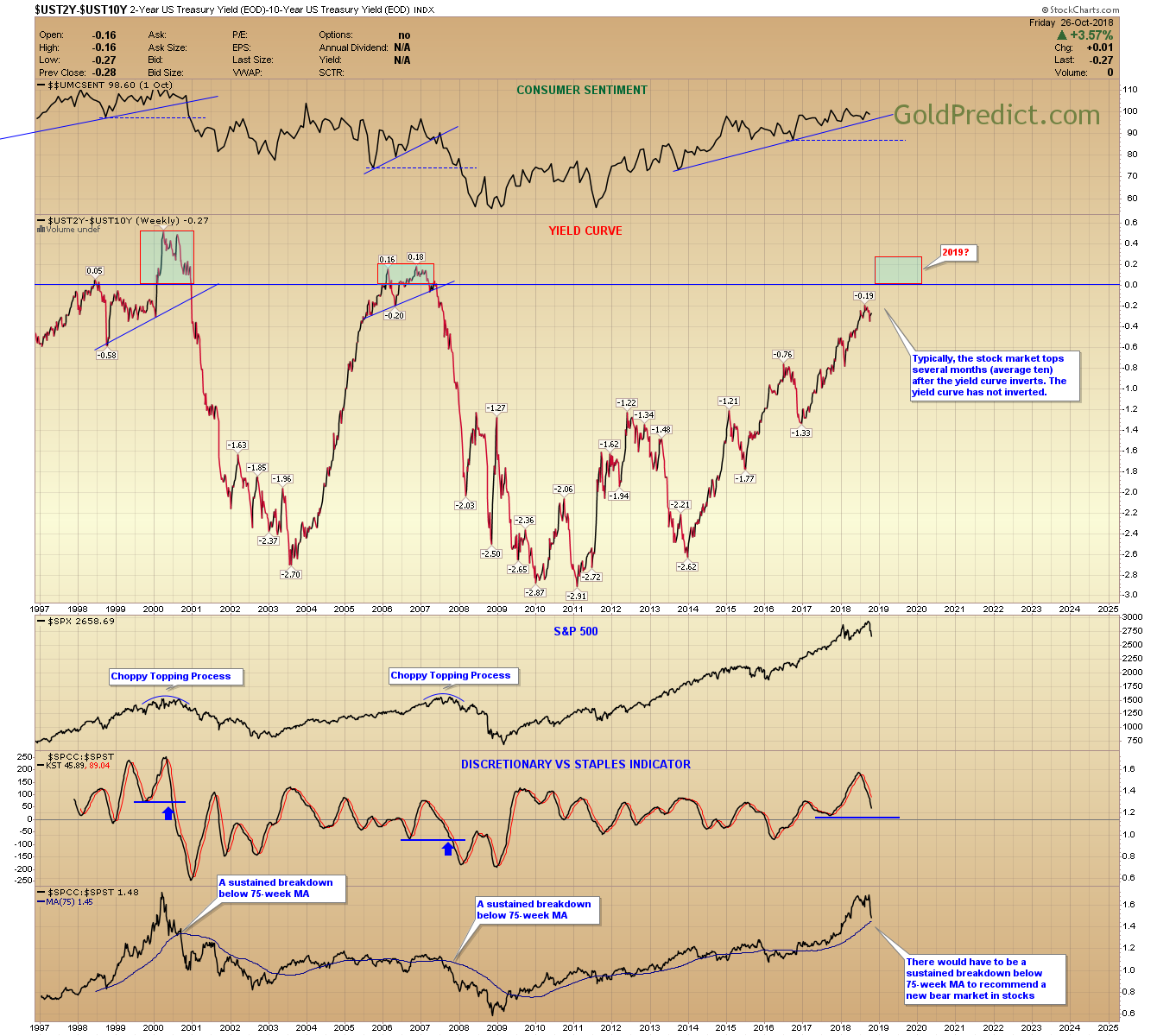 -SPY- There are many similarities between now and the 2016 elections. Investors sought safety until the balance of power became clear. Then money fled gold and jumped back into stocks. I believe we will see something similar this year.

The stock market is already oversold. We have positive divergences building in the MFI and NYMO indicators. The ABC measured target suggests prices could reach the 259/260 level. However, it wouldn’t surprise me to see a spike to the longer-term trendline near 255.

-BEAR MARKET SCENARIO- I’d be very surprised if the stock market topped before the yield curve inverted and with interest rates just over 3%, but as investors, we need to be mentally prepared for anything. Like the quote from the big short says “It ain’t what you don’t know that gets you into trouble. It’s what you know for sure that just ain’t so”. So if I’m wrong and the stock market is in fact topping, then we will likely see a failed rally that rolls over in the first half of 2019. 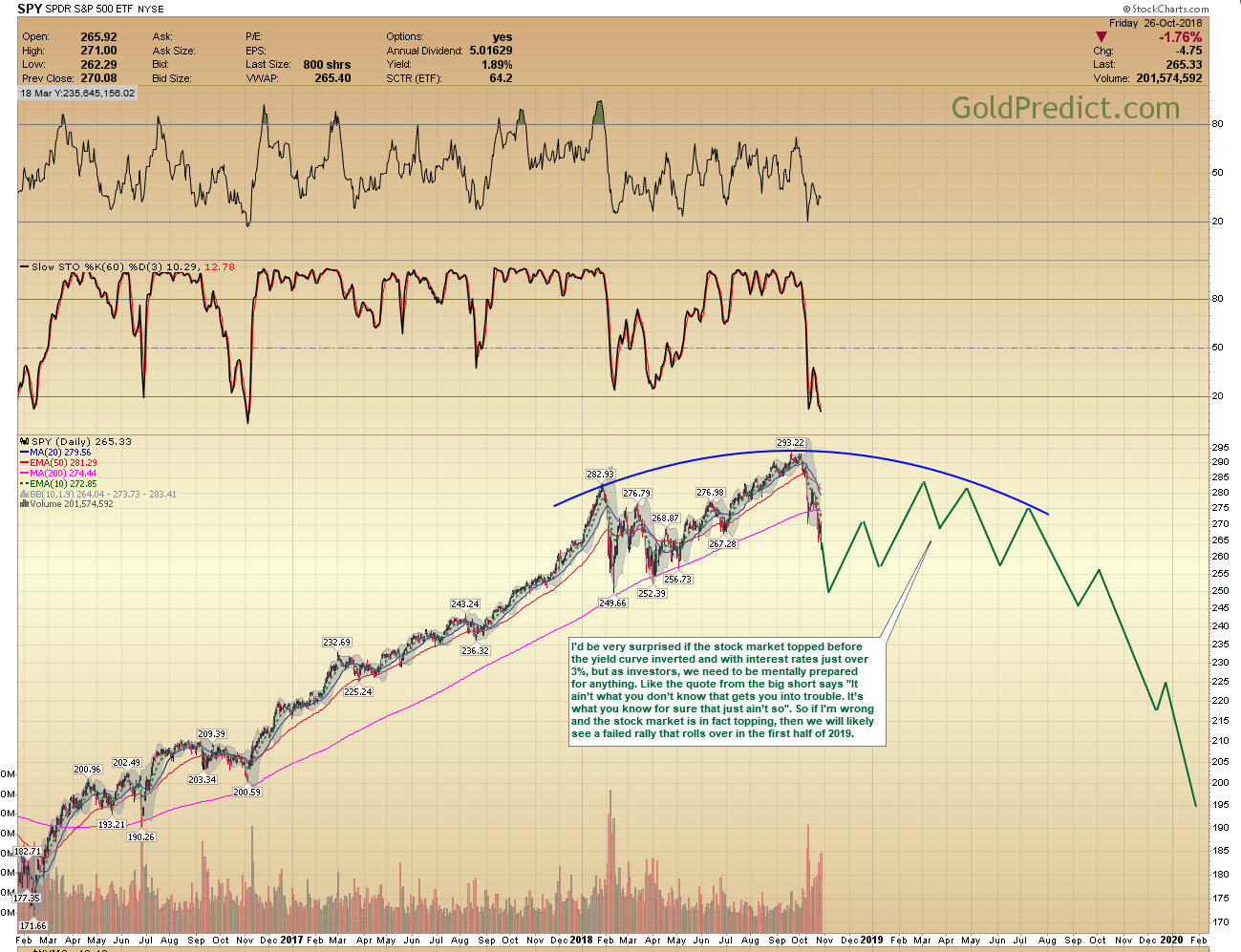 -US DOLLAR- The dollar is coming into resistance near the August high. Prices formed a bearish reversal candle on Friday. Prices need to close above the August high (96.86) to extend the rally to 98+. A failure here could produce a double top. 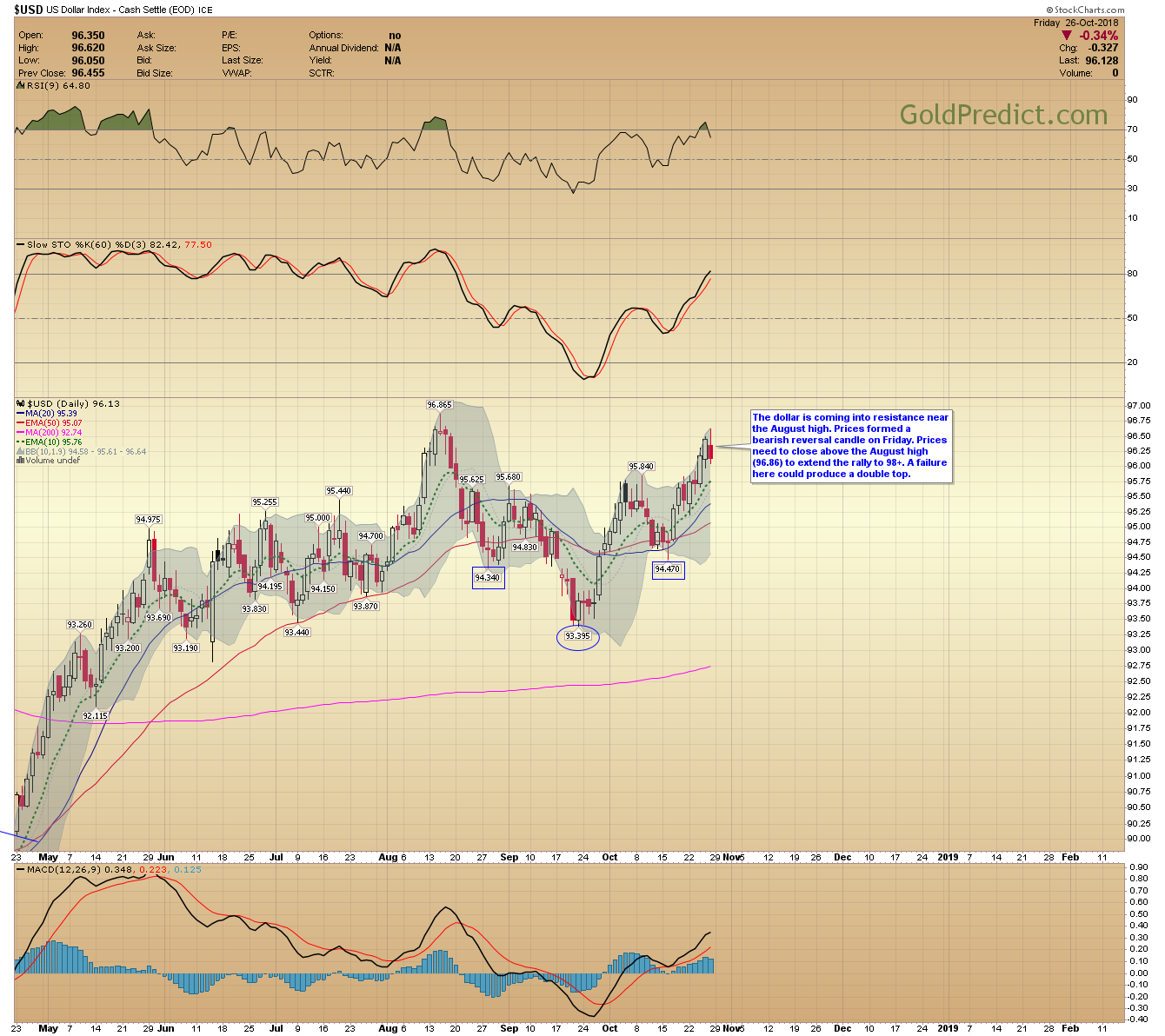 -GOLD WEEKLY- Gold tested but couldn’t quite close back above the 200-week MA. If we see a replay of the 2016 elections, then gold will probably top within the next week or so and decline in November/December. Progressive closes above the 50-week EMA would fortify the $1167 low and recommend a renewed bull market advance. 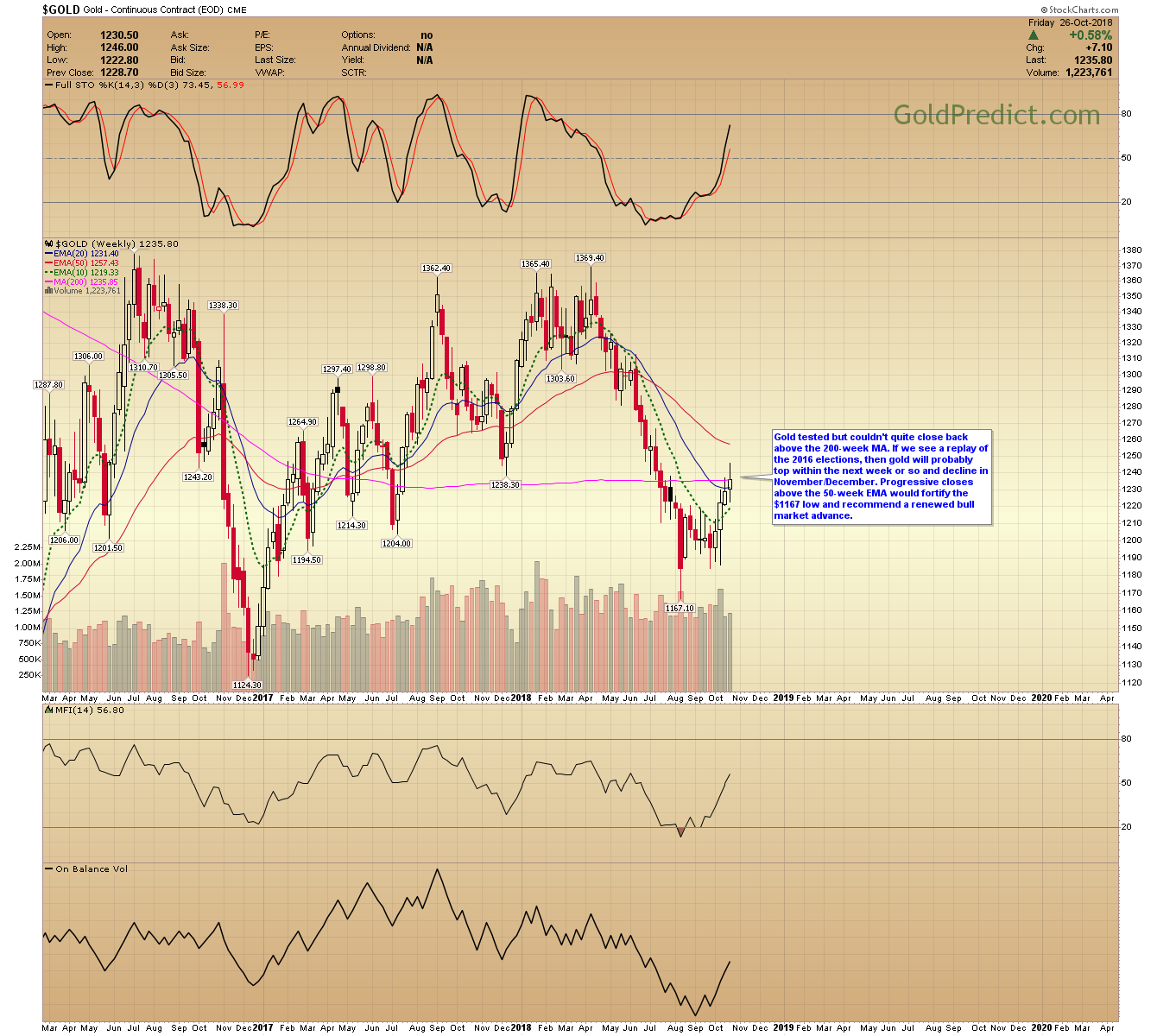 -GOLD DAILY- On the daily chart were about to have a 20/50 day bullish crossover. Support resides between $1210 – $1215. What happens next depends on the stock market and the November 6th elections. Progressive closes below the 10-day EMA will signal an initial breakdown. A spike to new cycle highs remains possible going into the polls. 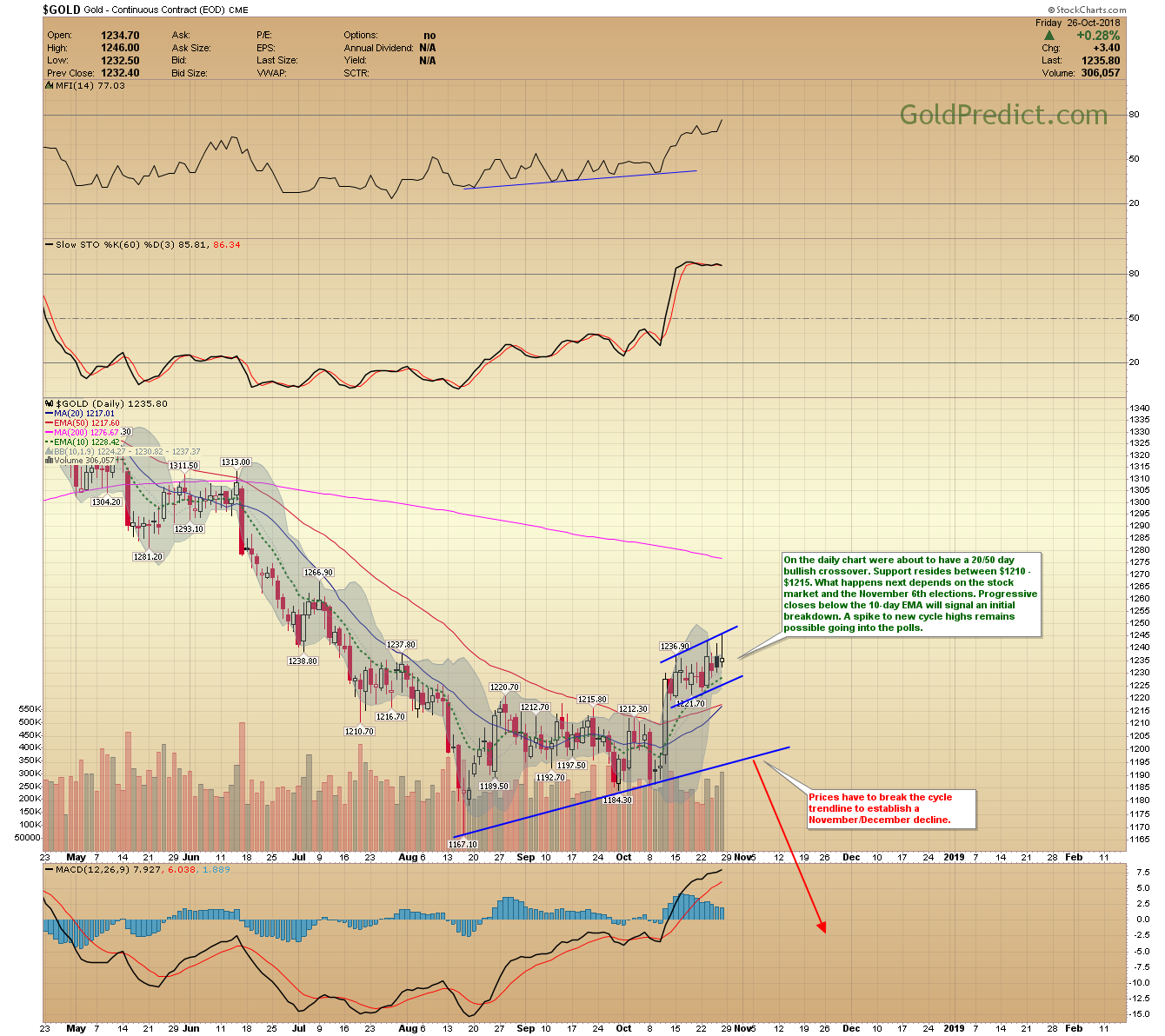 -PLATINUM- I haven’t touched on platinum in a while. Prices tested the bottom of the 14-year support range in August and are up about $100. To support a new multi-year advance prices have to recapture the declining 200-week MA. A breakdown below $750 would be detrimental and establish a price target of $600-$640 and potentially lower. 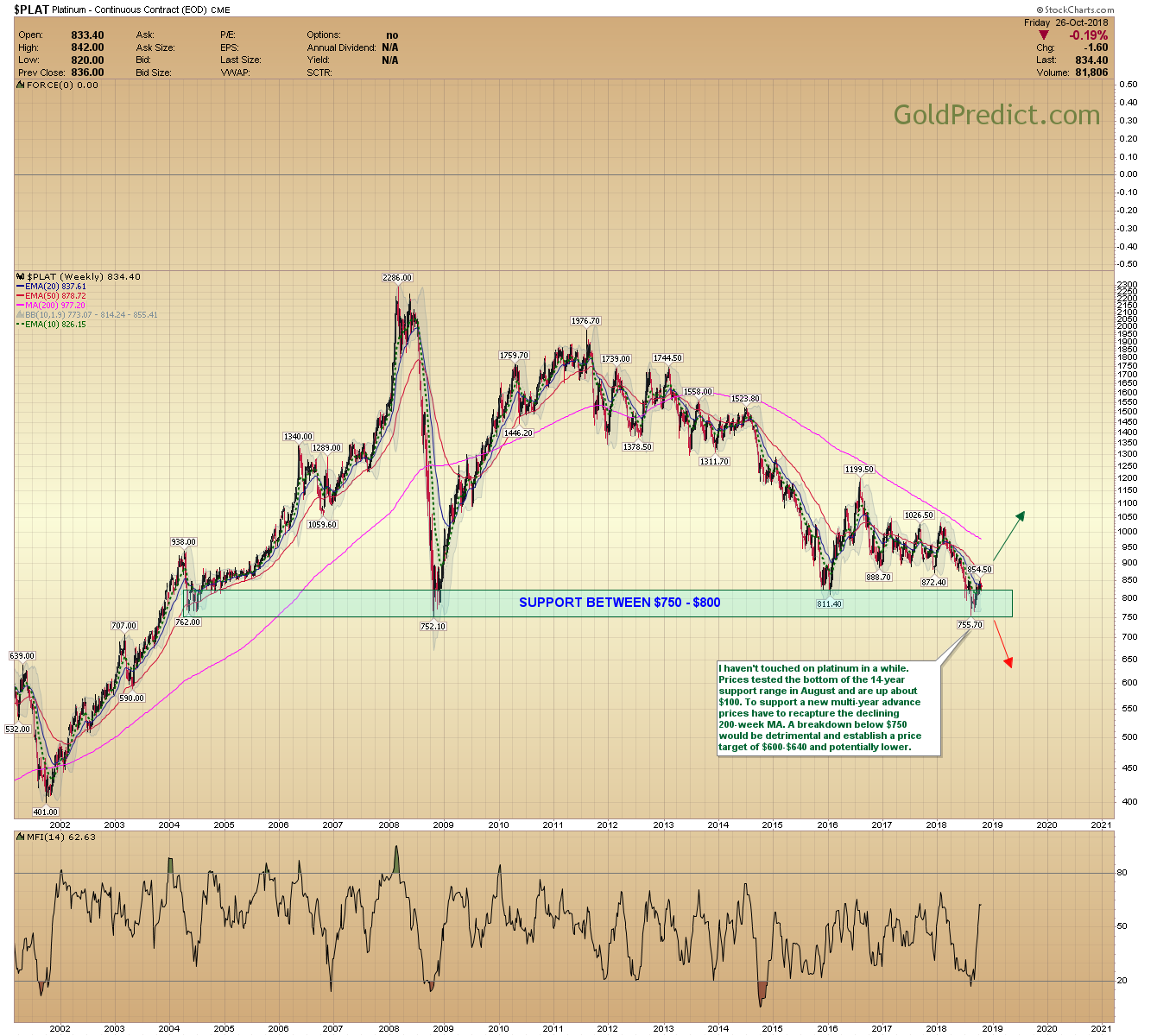 -SILVER- Prices are coiled like a spring, and I think we will see a sharp move at some point. Which way…I’m not sure. I’ll be on the lookout for something similar to May/June where prices broke higher, then lower. To support a significant low at $13.97, silver would have to rally and then stay above the 200-day MA. 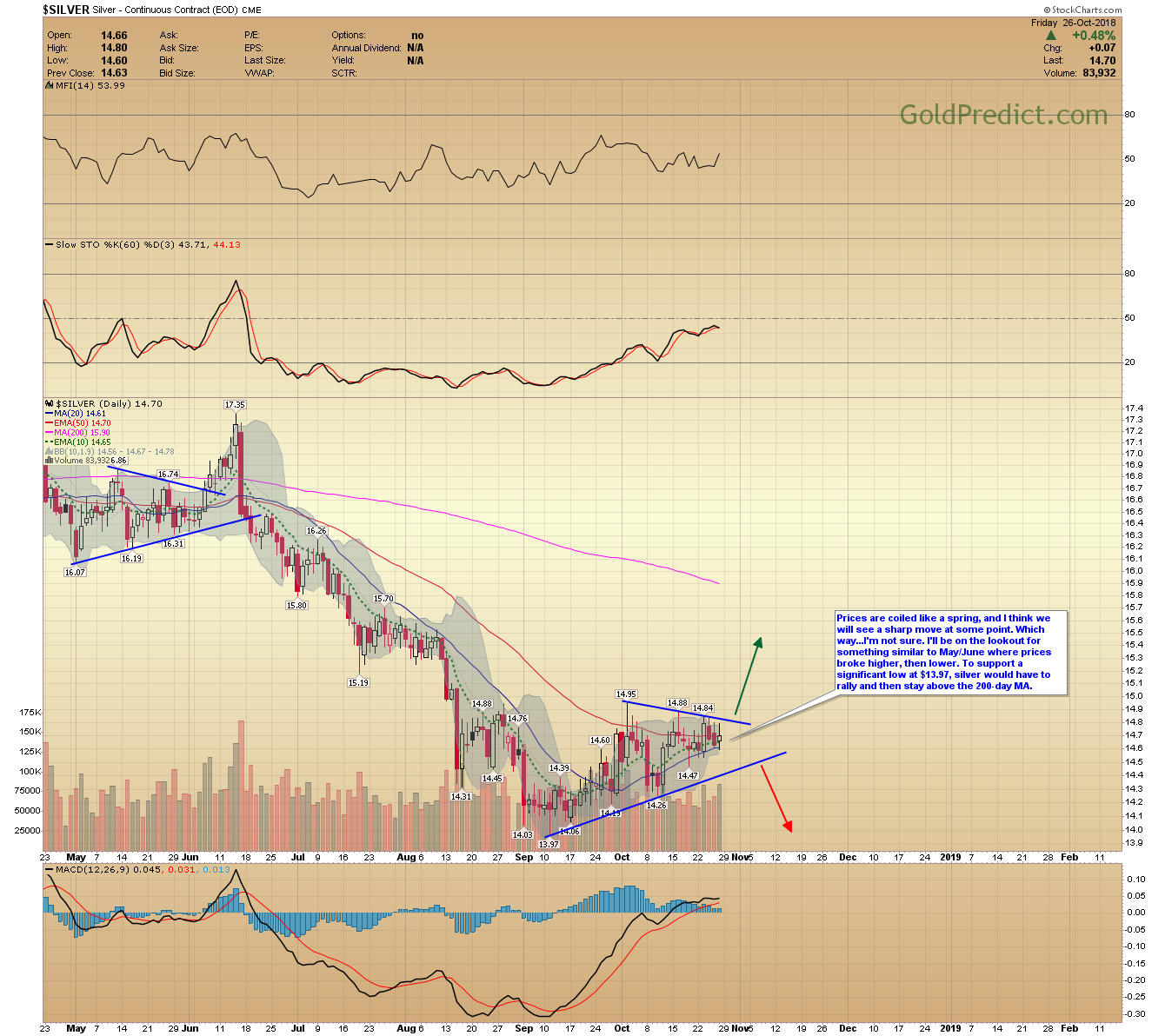 -GDX- It looks like miners are going to lead metal prices lower. I believe they already reached their October highs. Closing below the October 11th, gap, and the cycle trendline will establish a breakdown. To invalidate the November/December outlook, GDX would have to reverse and close decisively above the $20.51 high. 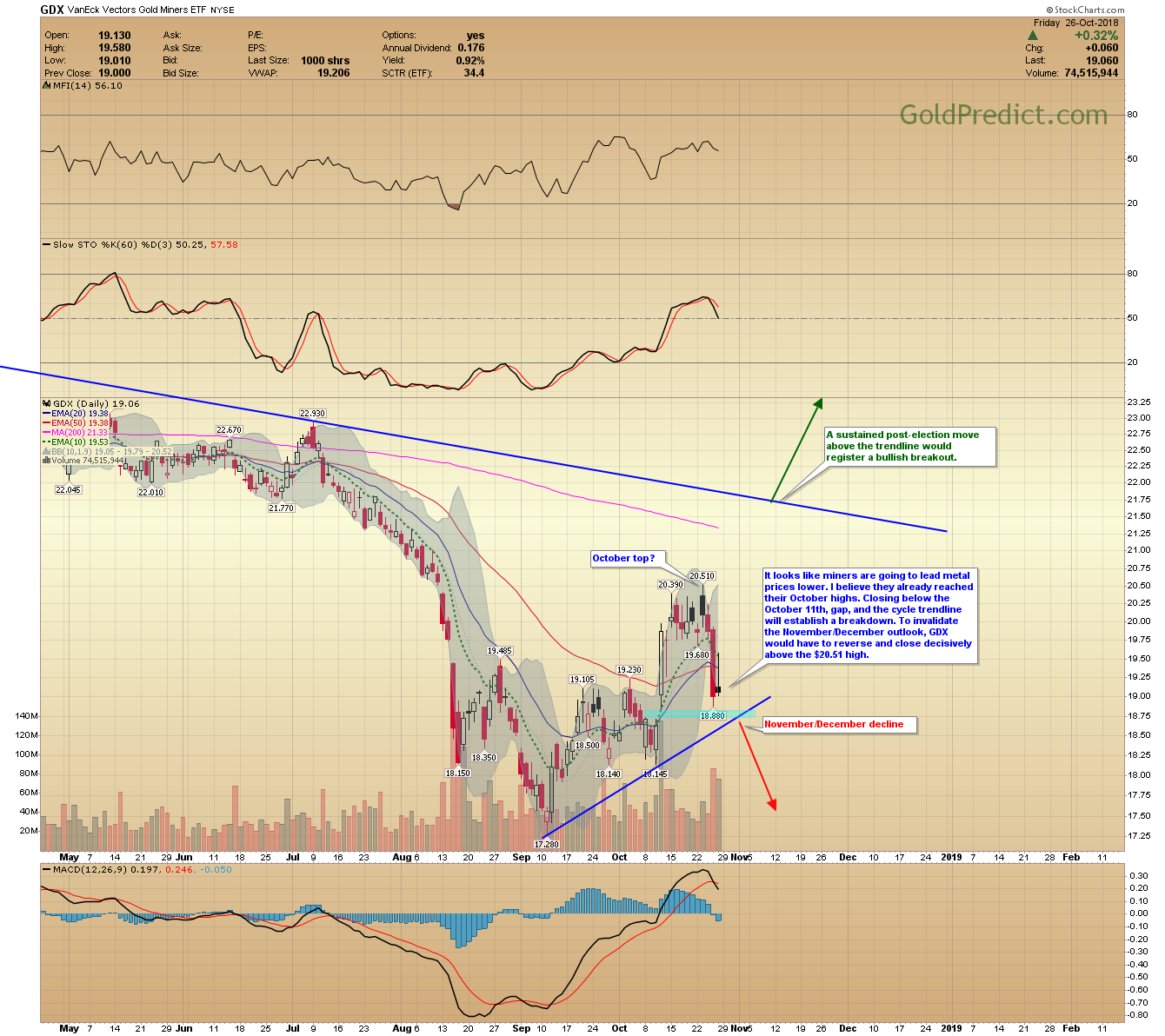 -GDXJ- It looks like juniors topped without filling the August $30.55 gap. Closing below the cycle trendline will establish a breakdown in juniors. 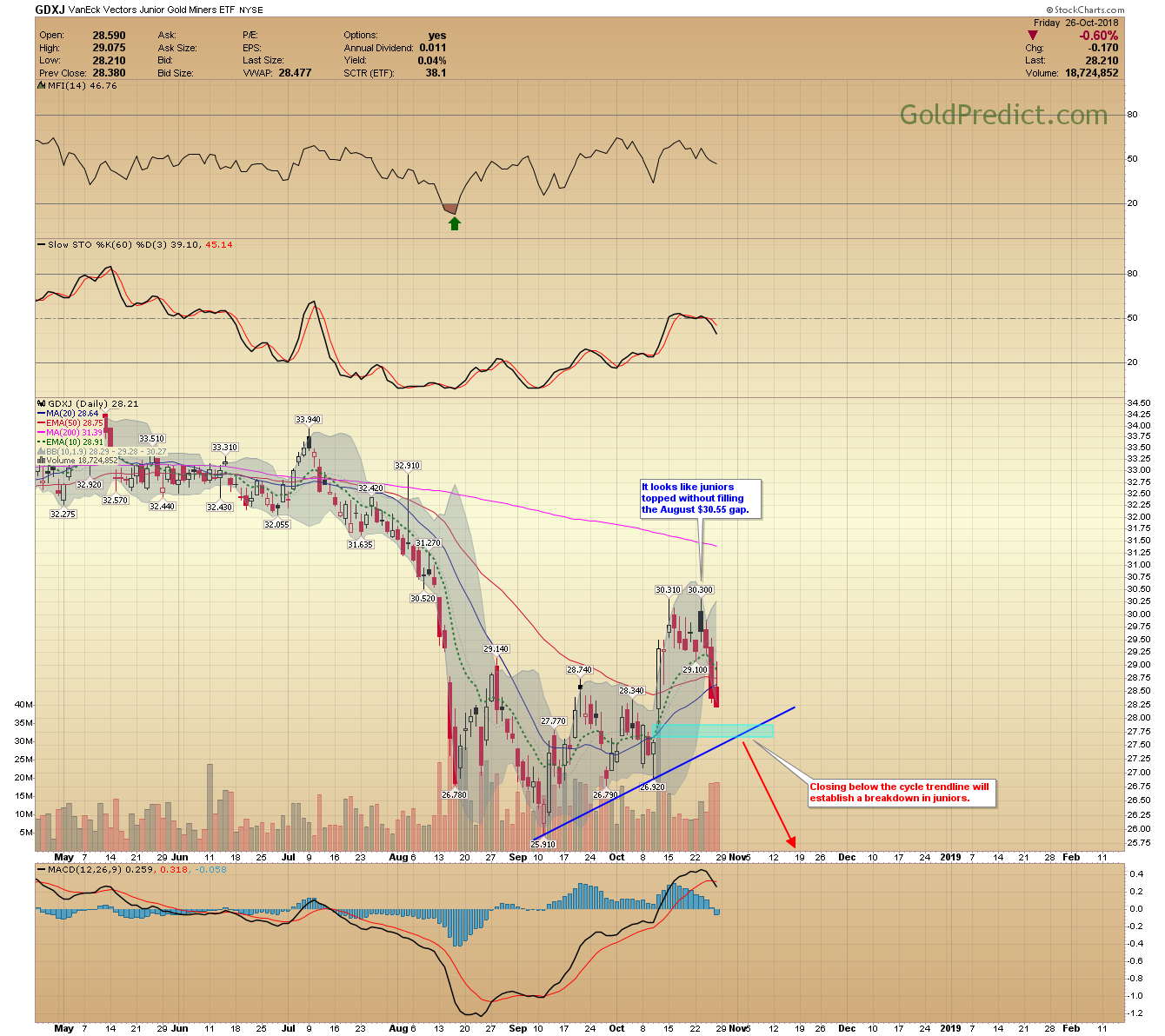 -WTIC- Oil may be forming another small bear flag. If so, we should see prices break lower within a few trading days. Closing above the 10-day EMA would support a lengthier rebound. The overall structure looks incomplete, and it could take some time to build a bottom. 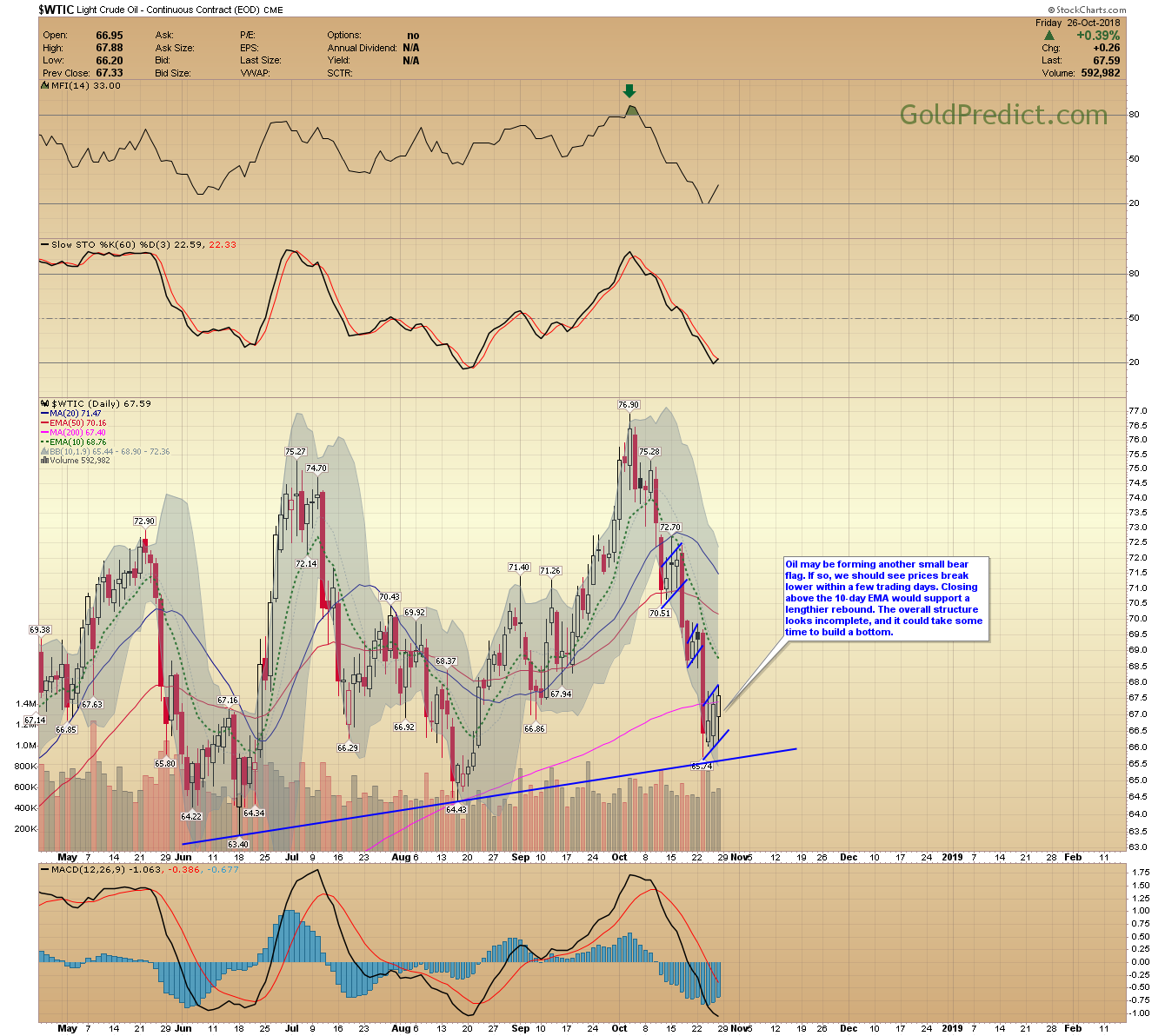 The next 2-weeks should be interesting. I’ll monitor each step and update daily. Have a great weekend.

This article was published Posted on October 28, 2018 in Categories Weekend Newsletters