We made it to the midterm elections. It will be nice when they’re finally behind us. Big money and businesses hate uncertainty. They want to know what the business and tax environment will be like in the coming years. Politicians make that difficult. They quarrel back and forth vowing to undo whatever the prior administration accomplished. That breeds uncertainty and businesses often delay spending, hiring, and capital expenditures until the economic outlook firms.

Few expected Trump to win in 2016. If he was victorious, the consensus was gold would skyrocket, and the stock market would collapse; the opposite occurred. Big money realized Trump “the businessman” would probably be good for the economy. They immediately dumped their gold holdings and jumped headlong into the stock market.

These are just midterm elections, but they still have a significant impact on the economy. Currently, president Trump benifits from a Republican-controlled House and Senate. The balance of power will change if/when the Democrats regain the majority in the House as suspected.

Money flows after the elections will tell us how to be positioned heading into year-end. The seasonally weak period in gold from November to December has been dominant since 2011. Is 2018 the year that streak ends or will precious metal investors get another buying opportunity this December?

-US DOLLAR- The dollar formed a reversal candle on Friday’s jobs report. Progressive closes above 97.00 would confirm a breakout. 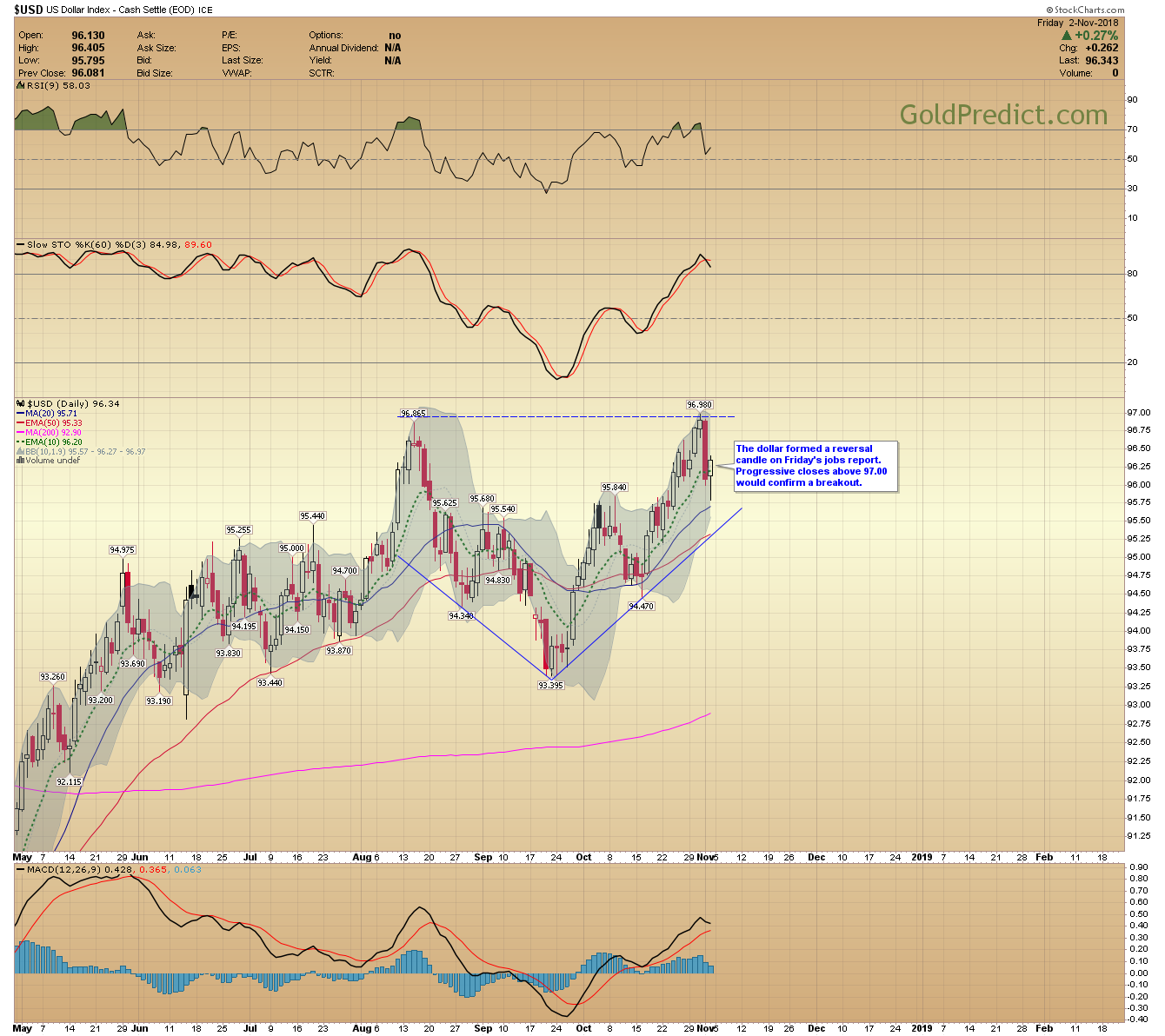 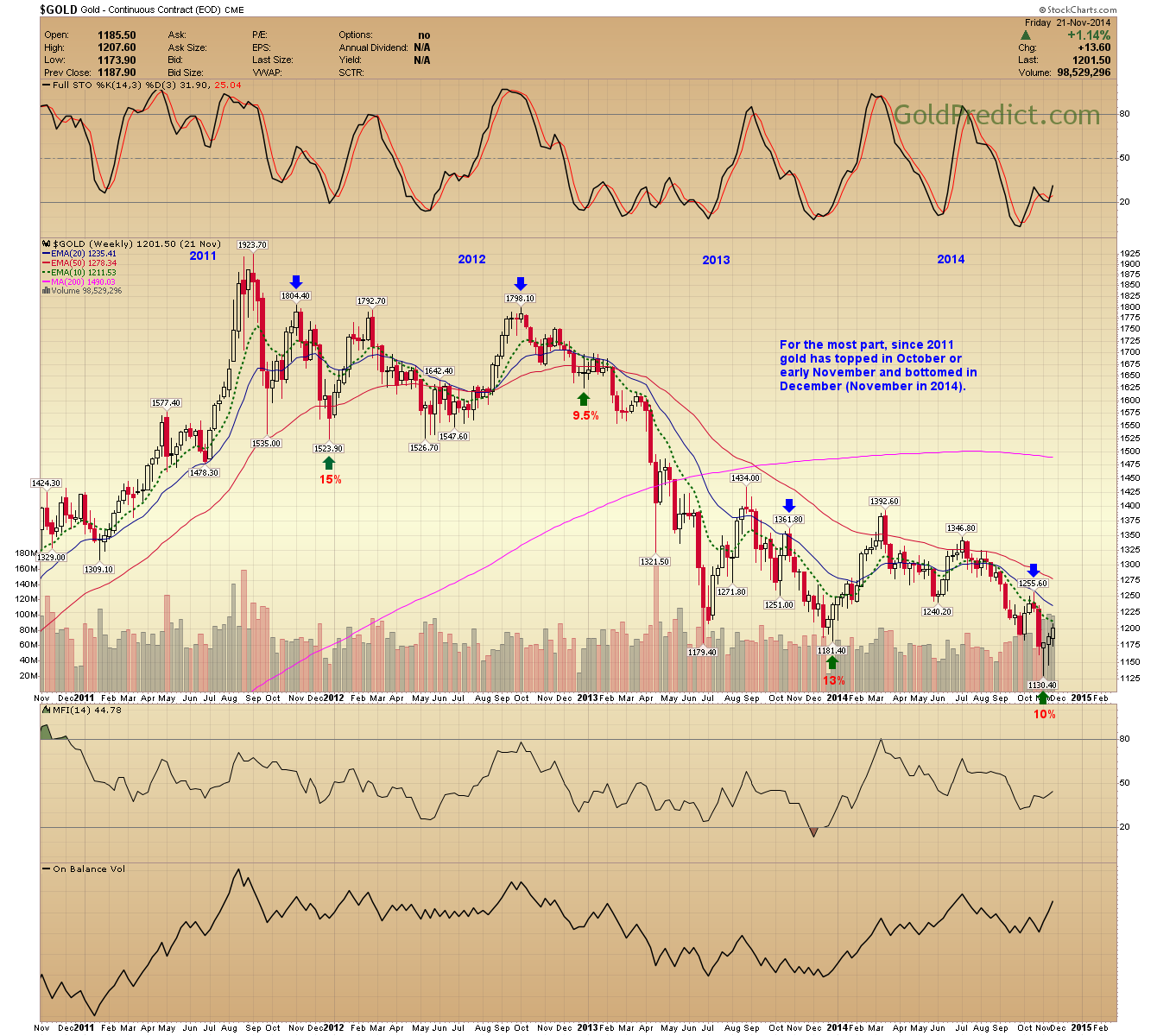 -GOLD 2015 to 2018- Will the seasonal pattern repeat in 2018? I don’t see anything suggesting it won’t. The only clue the model may be losing momentum is last years scanty 5.4% decline. From a cyclical perspective, the bounce coming out of the $1167 low is entering its 12th week, and prices are yet to challenge the 50-week EMA (currently $1256). Today’s setup reminds me of 2015, and the 50-week EMA should contain prices on a closing basis. 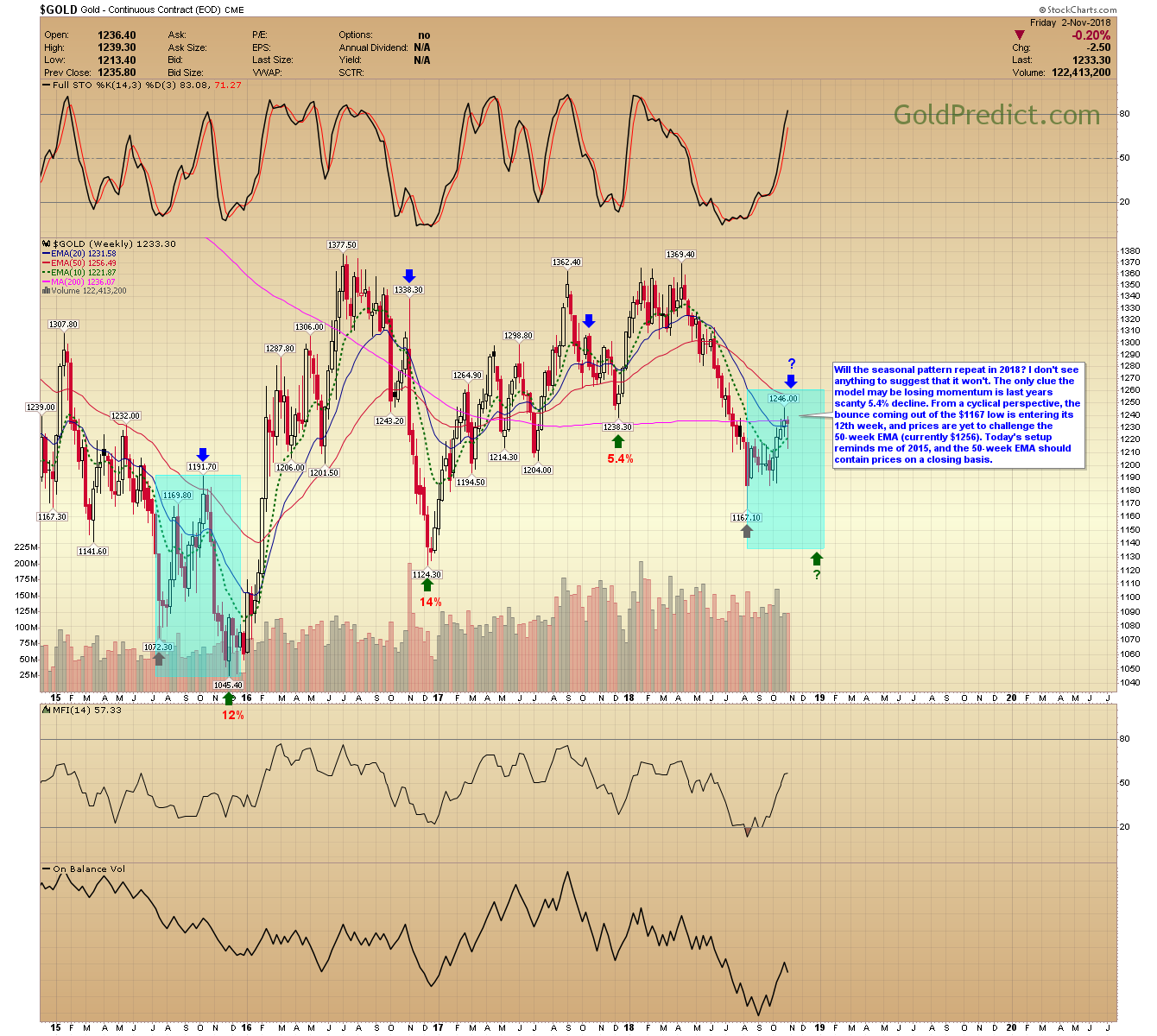 -GOLD- Get ready for another interesting week. If big money views the election results as pro-growth and good for the economy gold will probably weaken into the December rate hike. If big money views the elections results as anti-growth and bad for the economy, the stock market will probably remain under pressure, and gold should rally. I think it will become clear which plot is unfolding by Thursday. 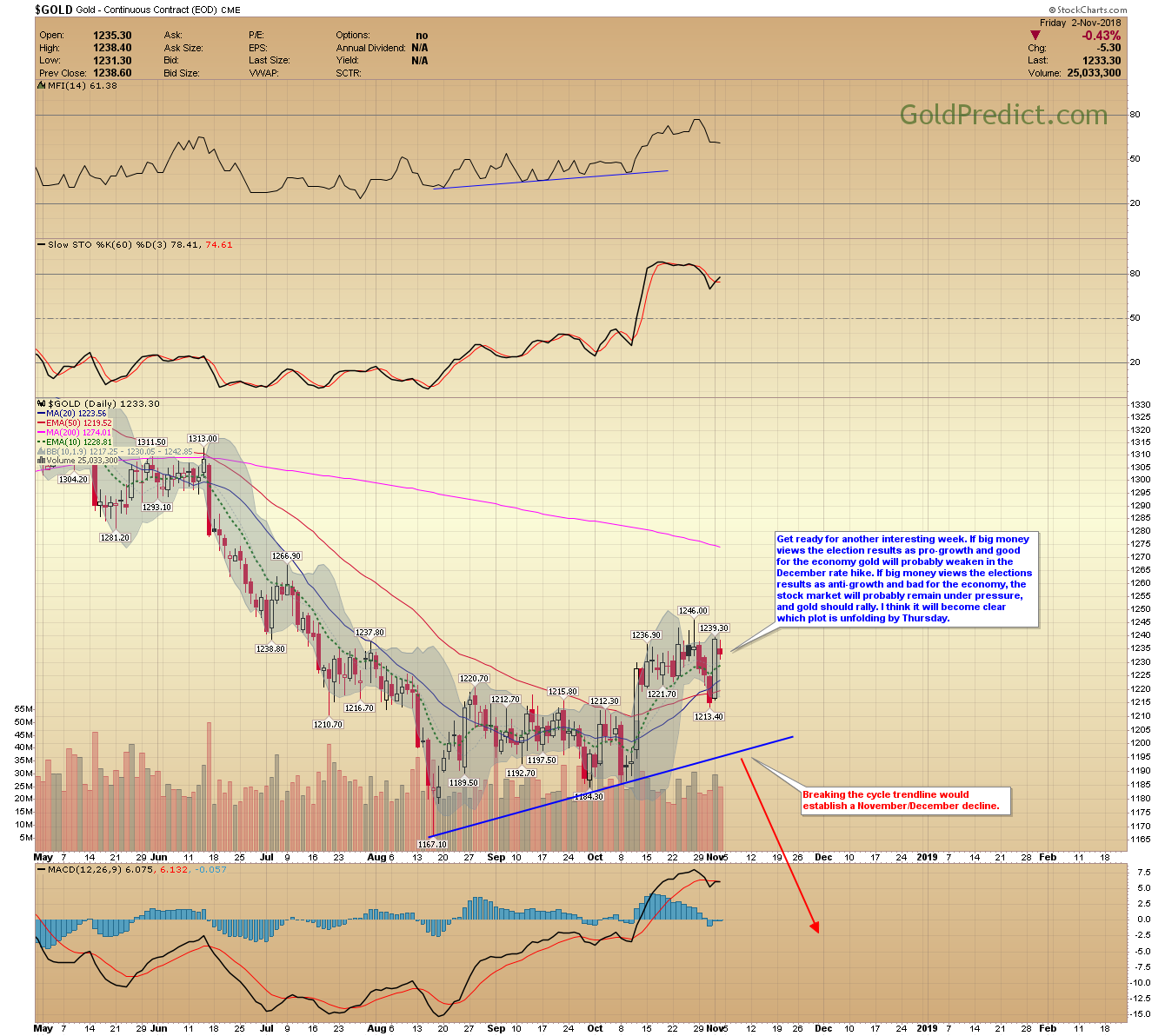 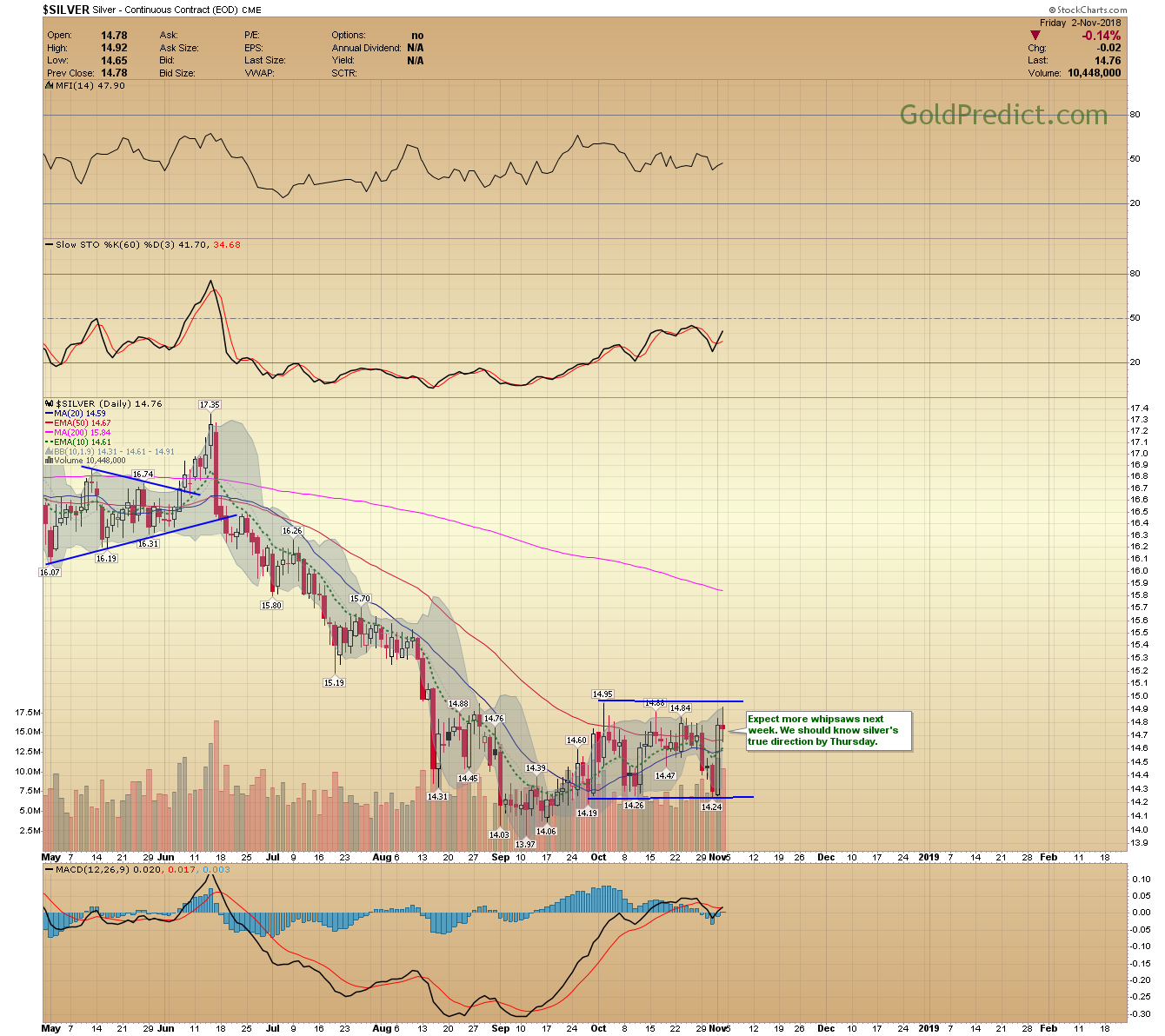 -GDX- Is this a 1-3 day bounce (bull trap) before a sharp collapse or the source of a new advance. We should know by the end of next week. I’m leaning bearishly and structured a small GDX option position accordingly. 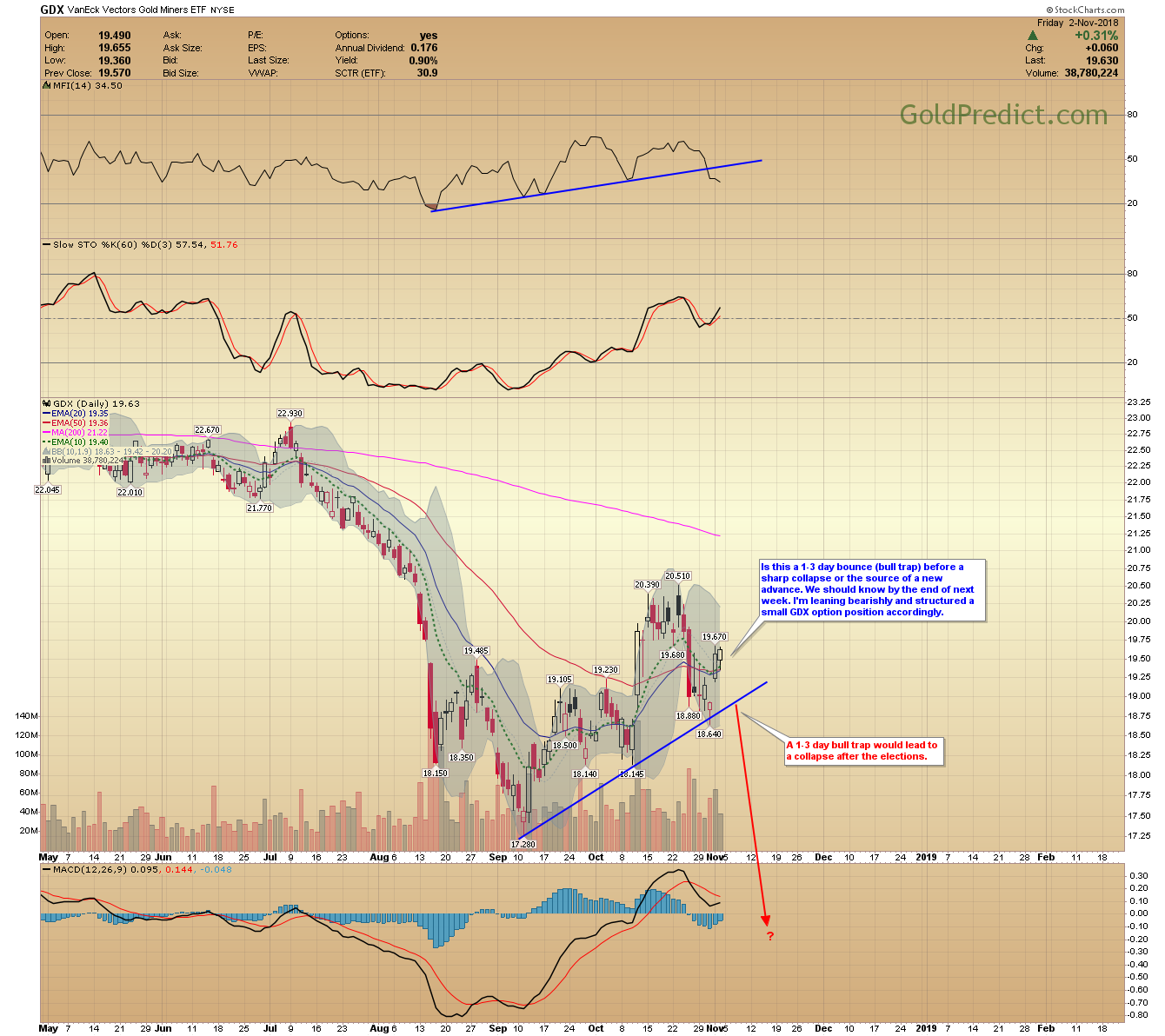 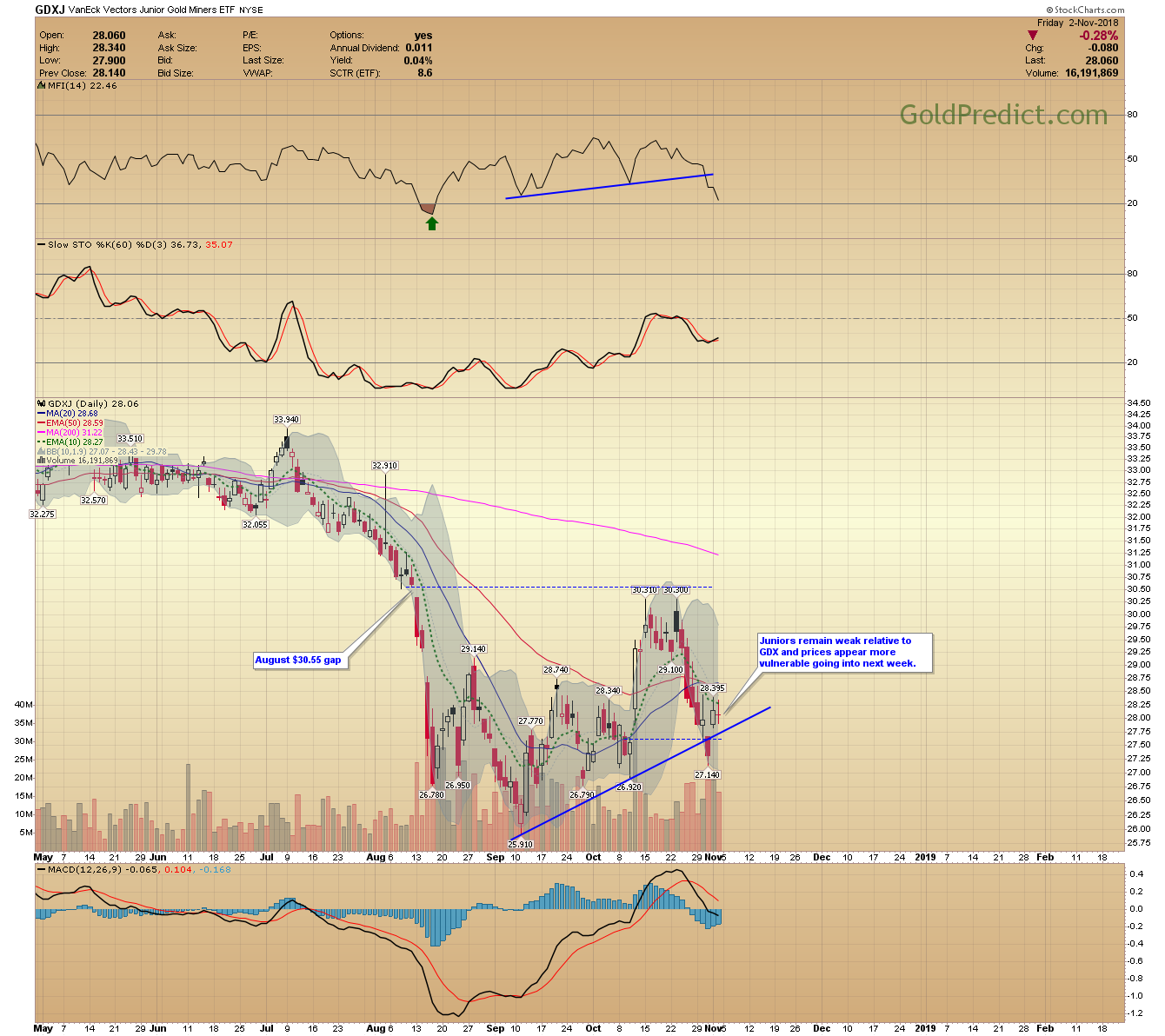 -WTIC- Oil is very oversold on a short-term basis. Prices closed below the June bottom, and prices could be working on an undercut low. Oil is due for a nice rebound. I may consider a short-term long next week. 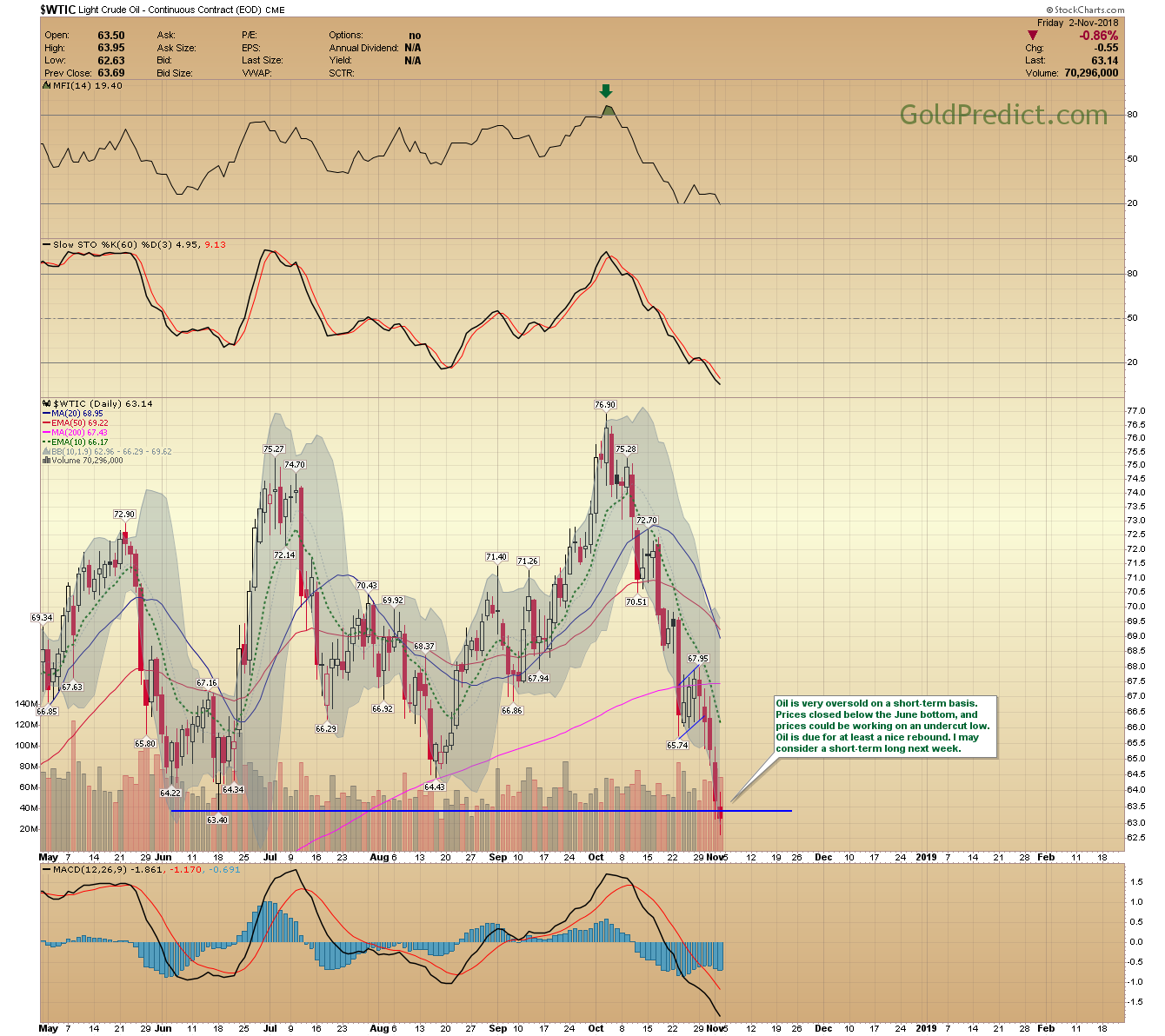 Expect more volatility going into and immediately following Tuesday’s elections. We could see prices spike or a sudden collapse. We should have our bearings by Thursday’s close. I’ll update every step of the way.

Have a safe and pleasant weekend

This article was published Posted on November 4, 2018 in Categories Free Updates, Weekend Newsletters