I’m going to start by revisiting the University of Michigan consumer sentiment numbers. There’s a lot to digest in the first chart, but if you study it, I think you’ll see the powerful inverse correlation with gold.

Next week should be interesting. Monday and Tuesday will set the tone for the week. I’ll post multiple updates and keep members informed.

-CONSUMER SENTIMENT- Consumer sentiment holds the keys to the next multi-year advance in gold. Precious metals peaked in 2011 when sentiment bottomed at 55. Sentiment soared to 75 by the end of 2011, and that propelled gold into a new bear market. Sentiment has been in an uptrend ever since reaching a recovery high of 101.4 in March of this year.

Take a look at sentiment between 2015-2016 (red shaded box). The trend along with the economy was rolling over. Gold sensed economic instability and rallied $300 in 6-months. By September 2016 sentiment was about to make a lower low (red arrow) but was saved in the eleventh hour by an unlikely Trump election. His tax cuts stimulated the economy and postponed golds bull market.

University of Michigan consumer sentiment ticked down slightly to 98.3 on Friday. It’s a harsh environment for gold when this indicator is around 100. Nevertheless, the uptrend appears to be stalling, and we should see sentiment rollover in 2019. Making a lower low (below 86) should coincide with a renewed uptrend in gold. 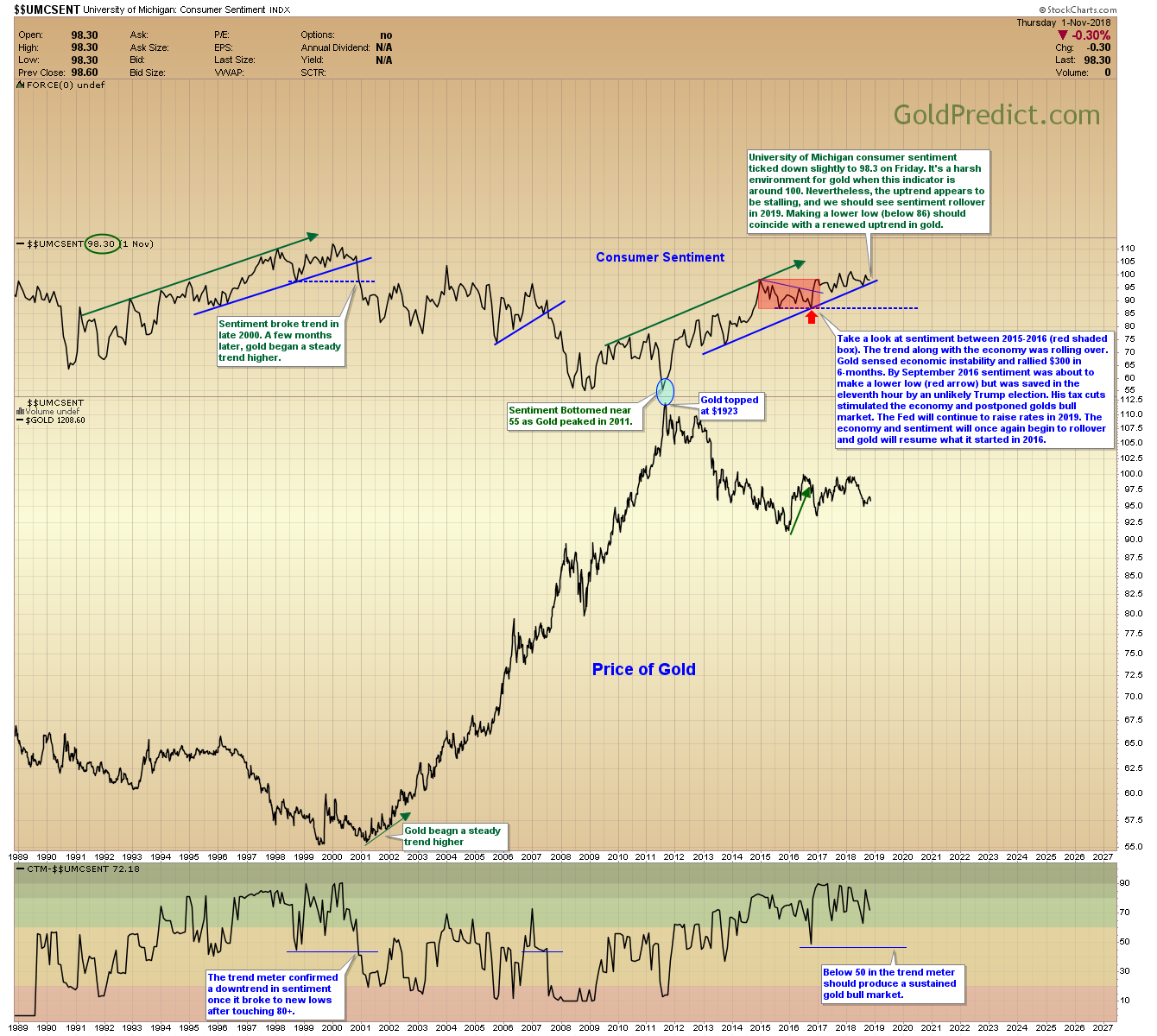 -GOLD WEEKLY- I think next week will provide some clarity to the intermediate-degree picture. A weekly close below $1200 would support a decline into December. 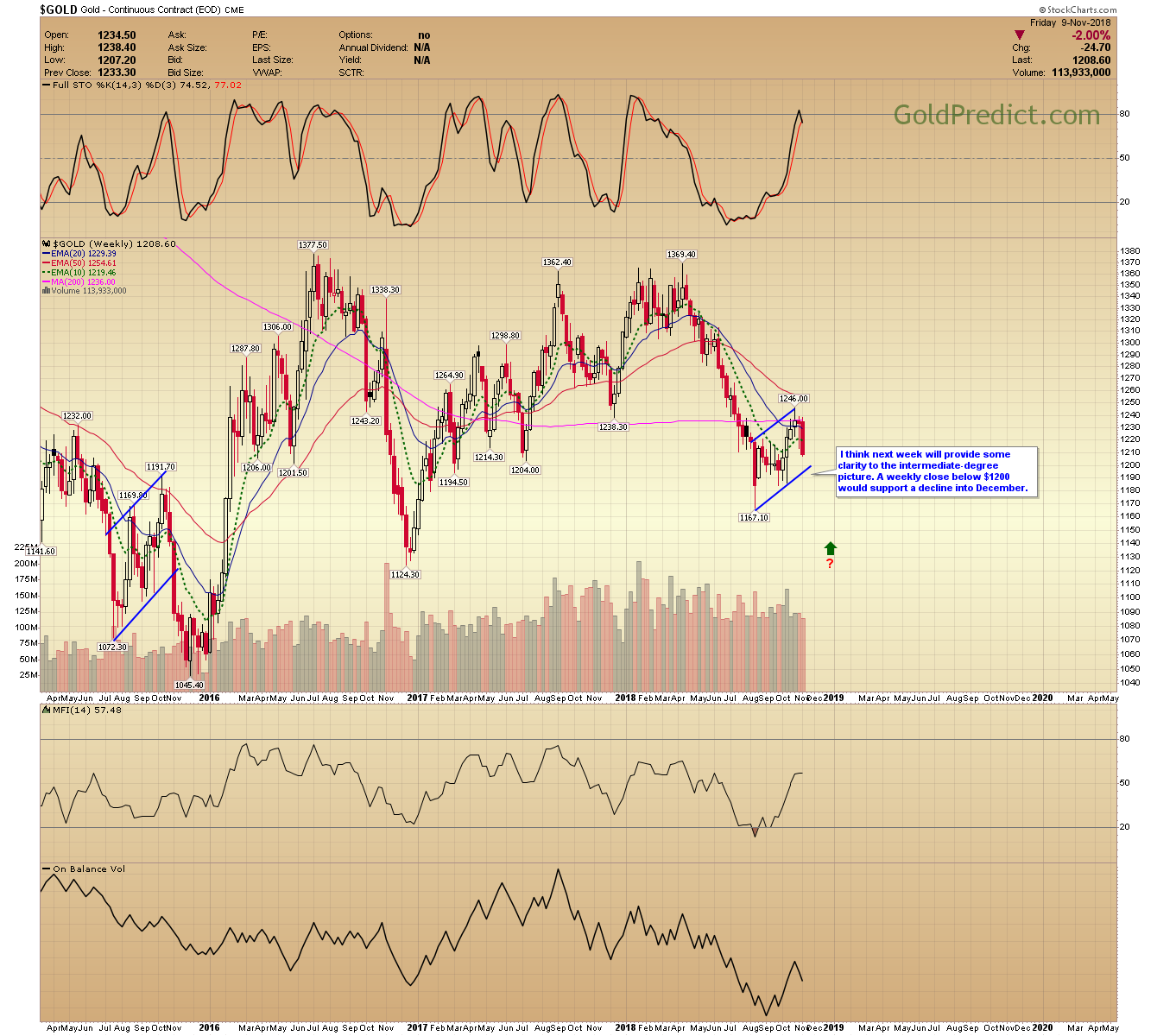 -GOLD DAILY- It appears gold is breaking down in November for the 7th straight year. However, this scenario won’t be confirmed until prices break the October low ($1185). The average seasonal decline from the October peak to the December bottom has been 11%. Last year prices dropped just 5.4%, so I’ll need to see a couple more weeks of price action before selecting December targets. Timeframe wise, the December 19th Fed meeting seems like a logical choice. 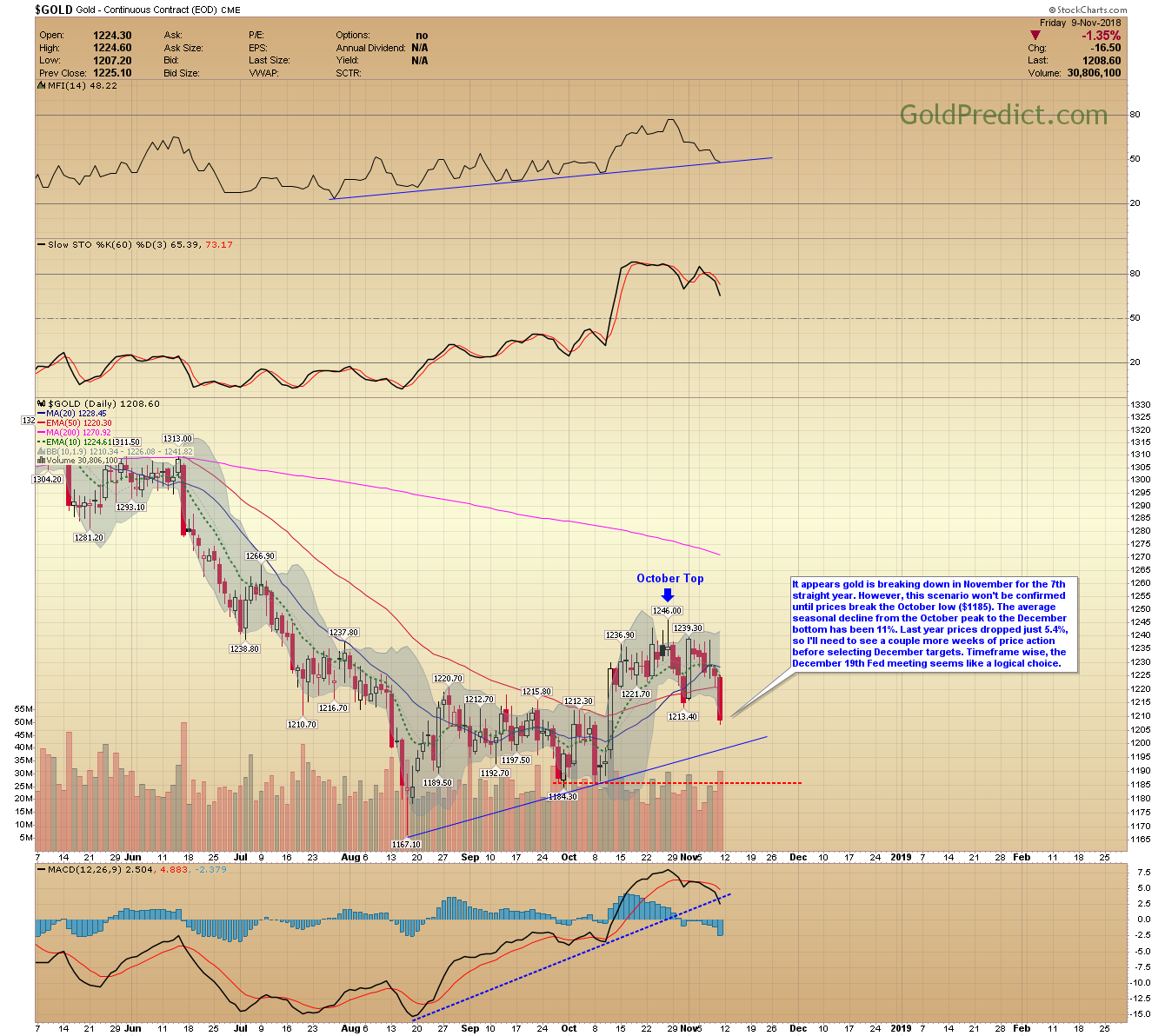 -SILVER- Prices broke lower from the trading range, and the next level of support arrives at $13.97. Below that and silver could test the $13.62 low punched in 2015. 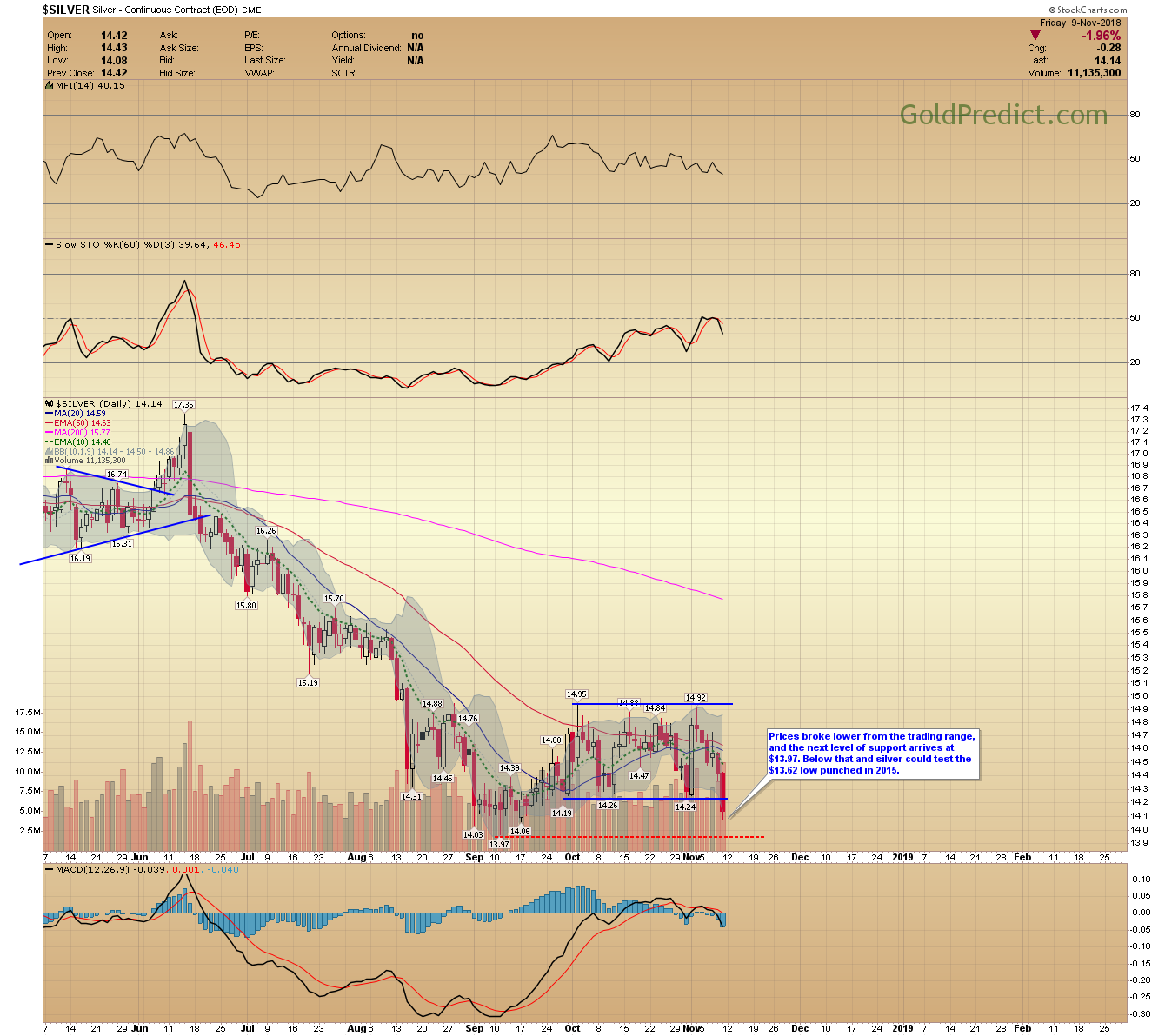 -US DOLLAR- The dollar appears to be on day two of a new advance. If the 10-day series persists, we should see prices rally for another 8-days before the next pause. 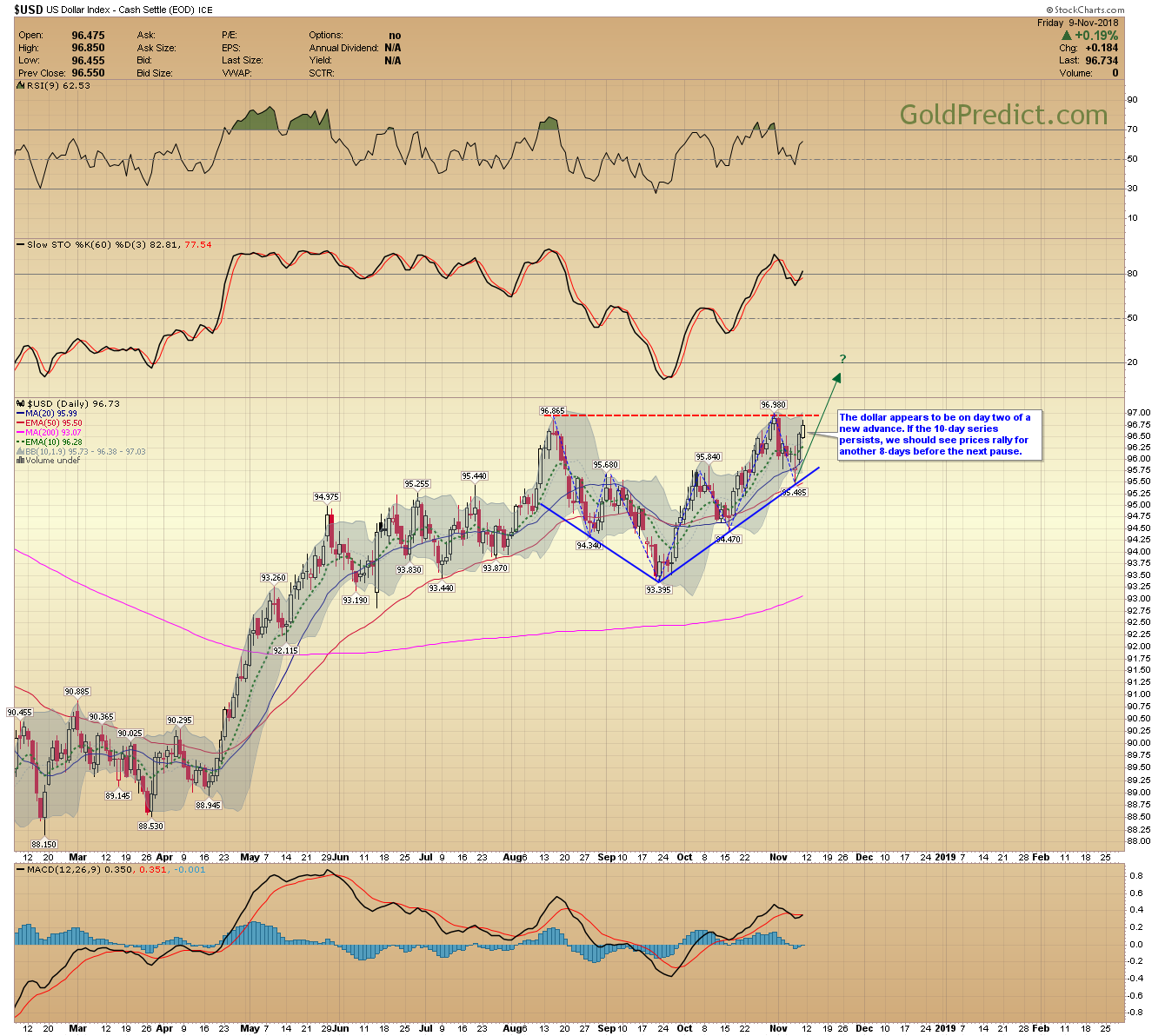 -GDX- The action in miners on Friday was a little concerning. I thought we would see a long red candle through the trendline. Instead, we got a red hollow reversal type candle similar to October 31st. I think that could mean one of two things.

1) Prices are getting ready for another bounce. Closing above $19.25 would confirm.

2) Gold needs to drop below $1200 before investors begin to panic.

We should know which scenario is playing out by Monday or Tuesday. I’ll adjust my JDST holdings accordingly once the outcome becomes clear. 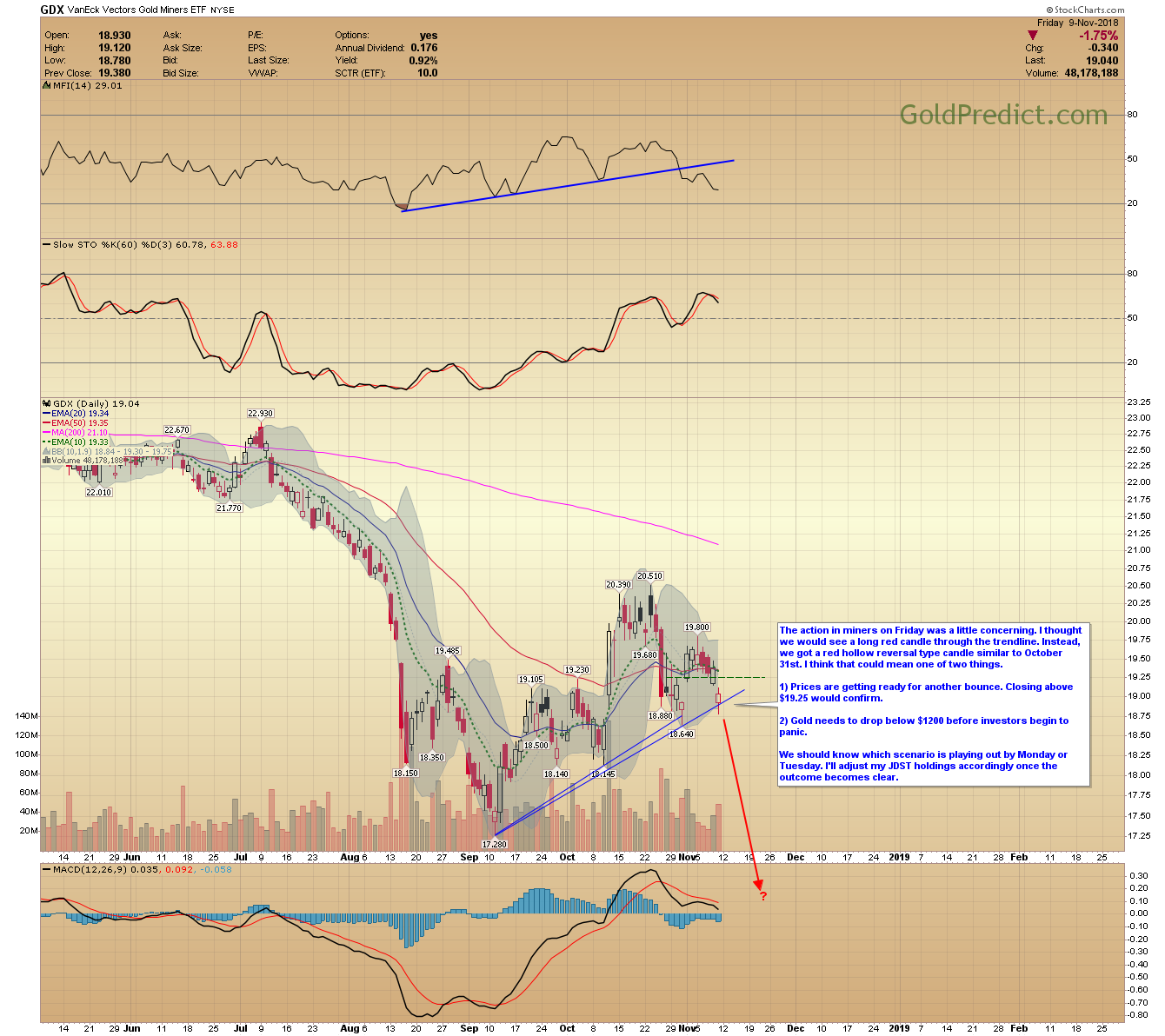 -GDXJ- Juniors finished below the prior weeks low. We haven’t seen the 3-5 day collapse I expected below the trendline. If prices aren’t significantly lower on Monday (Tuesday at the latest), I’ll have to consider the potential for another bounce. 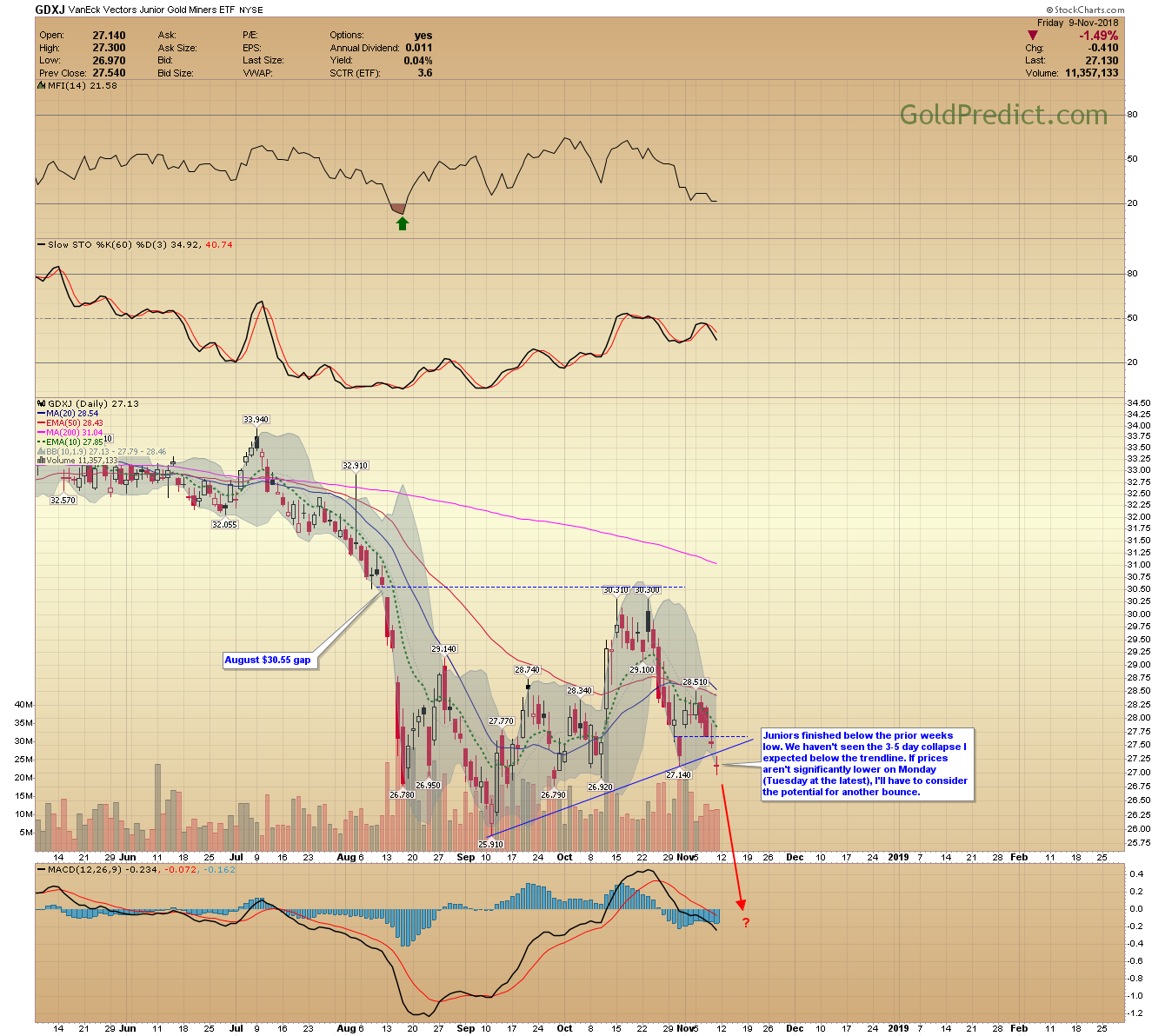 -WTIC WEEKLY- Oil is in a deep intermediate-degree correction and prices could test the $55.00 breakout level or the 200-week MA before bottoming. However, I do think prices will reach new highs in 2019 before the economy rolls over into a recession. 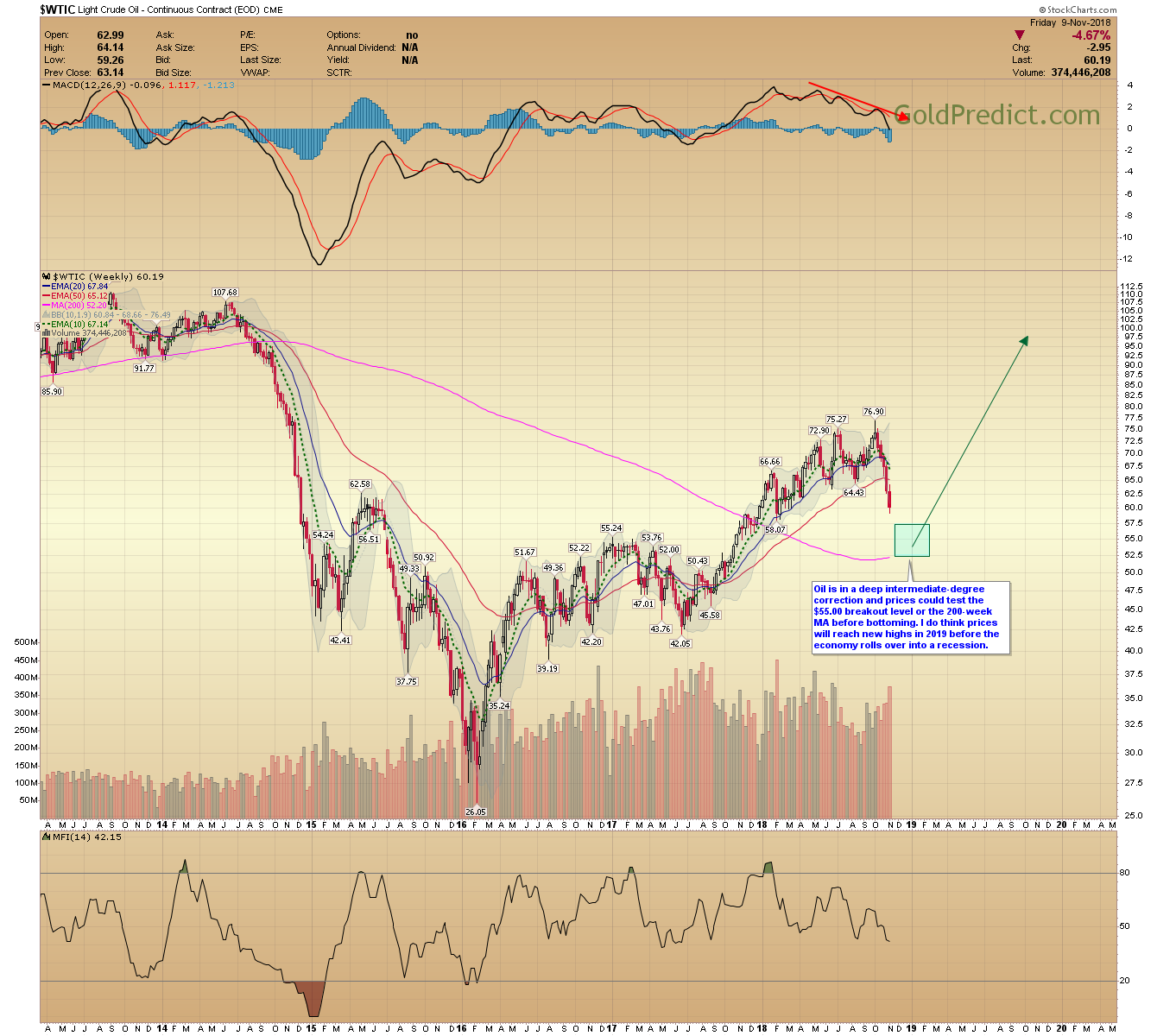 -WTIC DAILY- Oil has declined 20% in just over a month. The drop has been relentless. Prices will find a bottom and likely ascend to new highs in 2019. However, picking a bottom in the meantime can be dangerous. 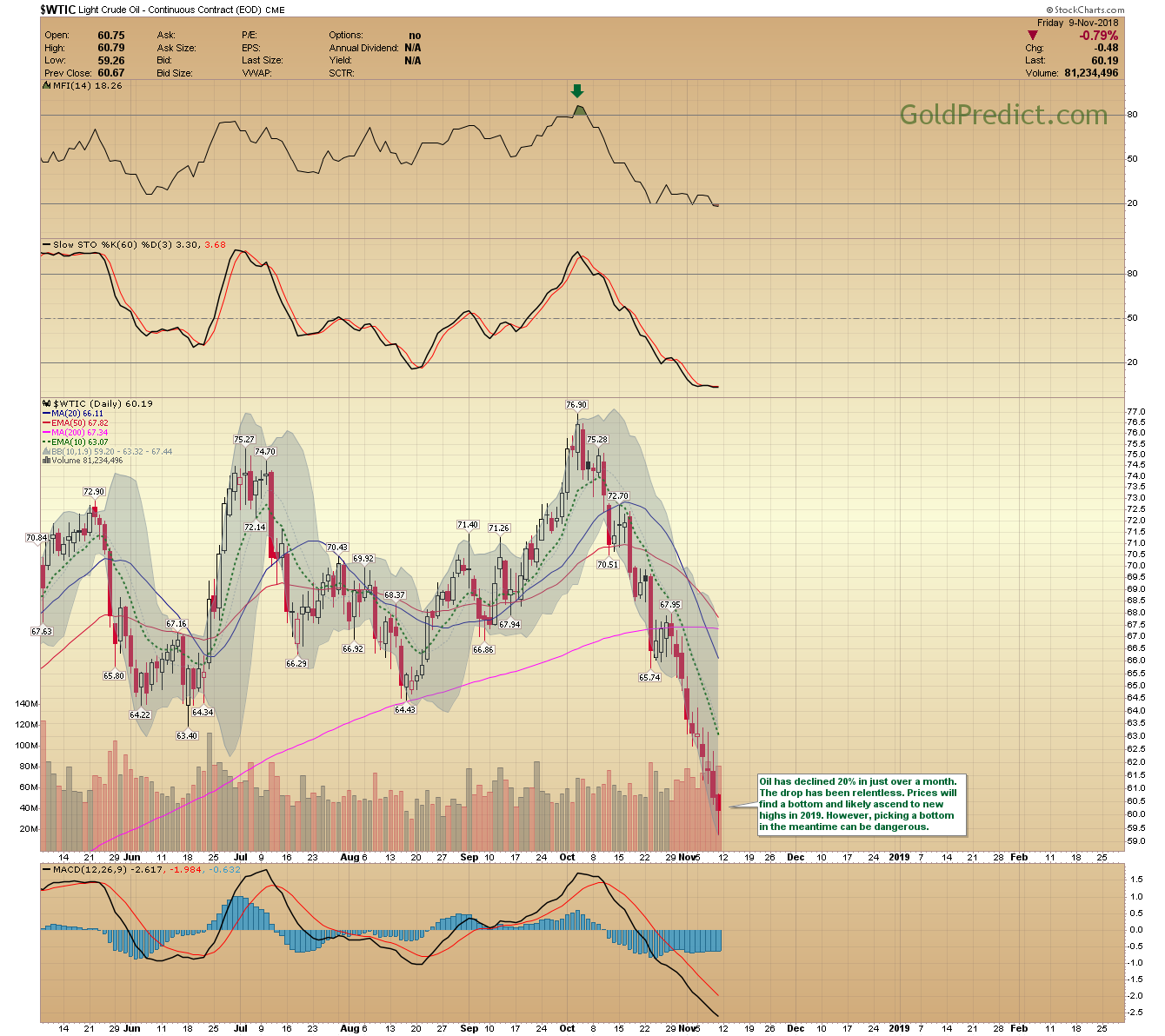 -CRB- It’s been said that the Reuters commodity index (CRB) adheres to a 3-year cycle. I believe oil makes up 25% of the weighting, so that explains the recent downturn. The chart appears to be working on a head and shoulder topping pattern. A decline below 186.74 will establish a breakdown and support a drop to 175 in Q1 2019. If confirmed, that would imply lower commodity prices for another 1-4 months. Gold’s weighing is 6% and often bottoms a month or two before the CRB. Defiantly something we need to monitor going forward. 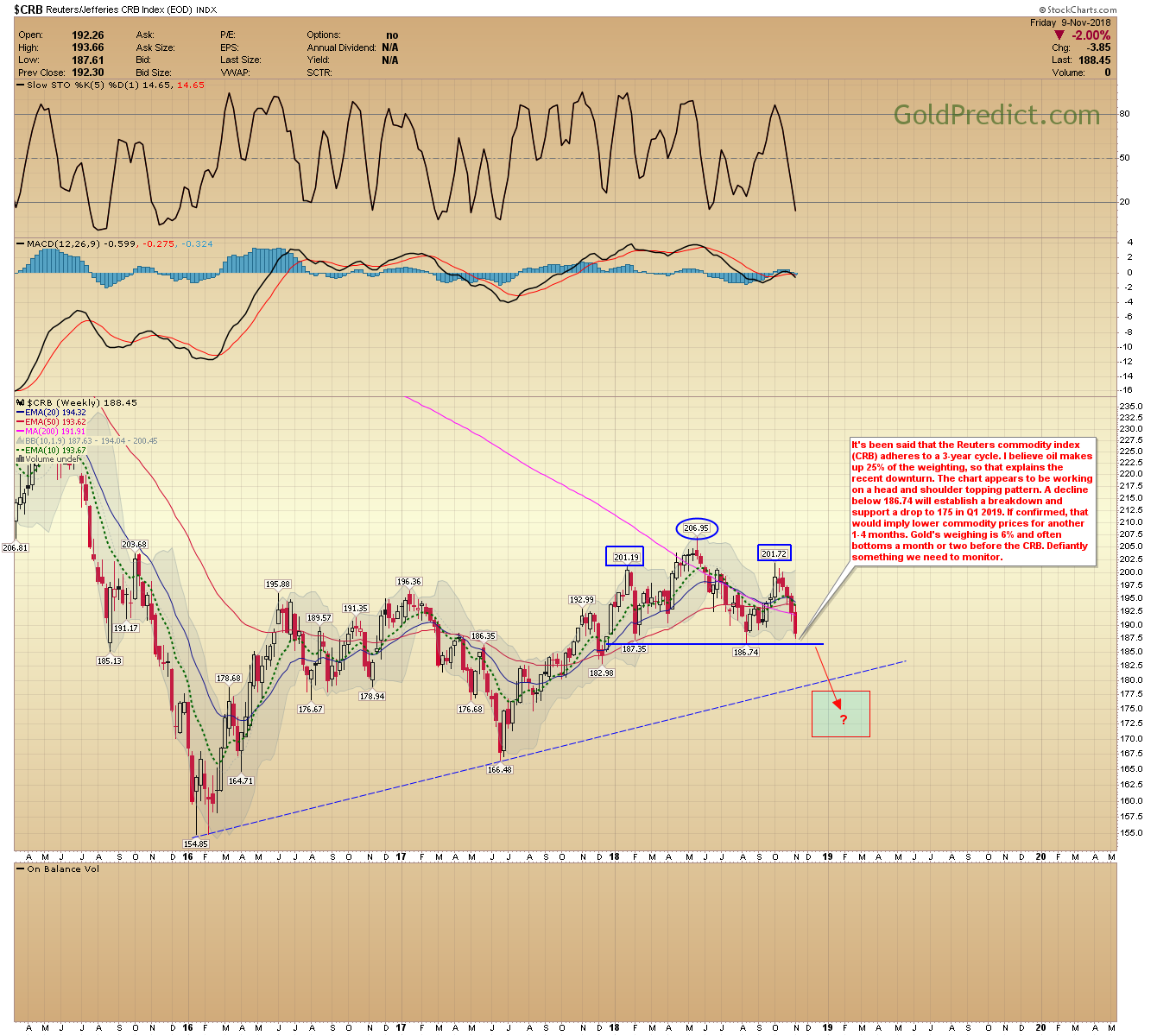 Hang in there gold investors. Prices could drop a little lower, but I think the downside is much less than the eventual upside. The Fed will continue to hike interest rates in 2019, and that will kill the economy. When the economic landscape begins to wane, as it did in 2016, gold will engage.

When and where will gold bottom? I won’t pretend to have a crystal ball. We will simply have to take things one week at a time. Consumer sentiment and golds fate depend on unknowable factors. For example, will a Democratic House pressure Trump out of the white house? Will Congress pass a 1-trillion dollar infrastructure bill. Will a significant military conflict begin somewhere? And of course, there’s the potential for a financial contagion or major terrorist attack. Multiple factors could alter golds timeline. However things play out, in the not too distant future (likely 2019), everything will begin to line up in golds favor and prices will start the next multi-year advance.

This article was published Posted on November 11, 2018 in Categories Free Updates, Weekend Newsletters