Gold, Silver, and GDXJ are at critical support while the dollar appears to be breaking out of a 3-month bullish consolidation.

Oil is down 28% in just 6-weeks; prices are approaching support. The decline has been relentless and taken on a life of its own. I think oil is capitulating and I’ll look to enter long positions in the coming days.

It’s still unclear if metals and miners will bounce off support or break sharply lower. I expected to know more by today, it may take a little longer. Sometimes prices don’t move as quickly as I’d like. Nevertheless, precious metals are at a critical juncture.

I’m leaving for a 2-day trip tomorrow morning. Unfortunately, I won’t have internet access until I return. I’ll be back on Friday around 2:00 PM and will post an update before the close.

-US DOLLAR- The dollar broke free from its 3-month consolidation pattern; prices pulled back today. If this is a genuine breakout, then prices should continue higher tomorrow or Thursday. Progressive closes below the 96.80 level would support a false breakout. 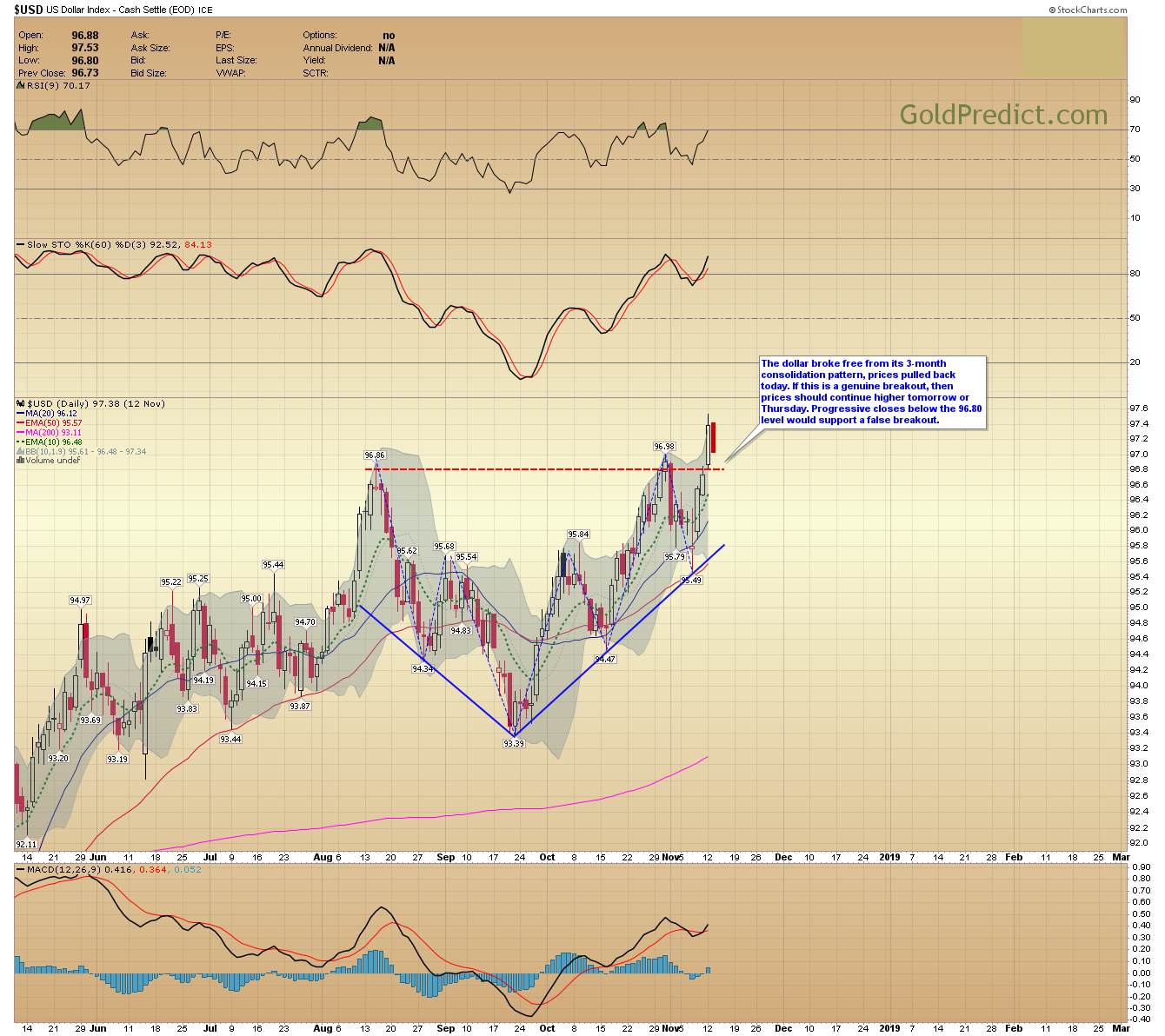 -GOLD- My primary outlook called for an October top that leads to a November decline and ultimately a December bottom. So far this forecast appears to be holding up. I think the big question now is will we get a modest decline of 5.4% like last year or a standard 10%+ seasonal decline like most years. I expected some answers this week. How prices react at the cycle trendline could provide some valuable clues. If gold bounces off the trendline, then we can probably anticipate more choppy price action and a moderate December low. However, if prices slice through the trendline and attack the $1167 low in November, then I think we can expect a deeper correction to $1125 or lower. 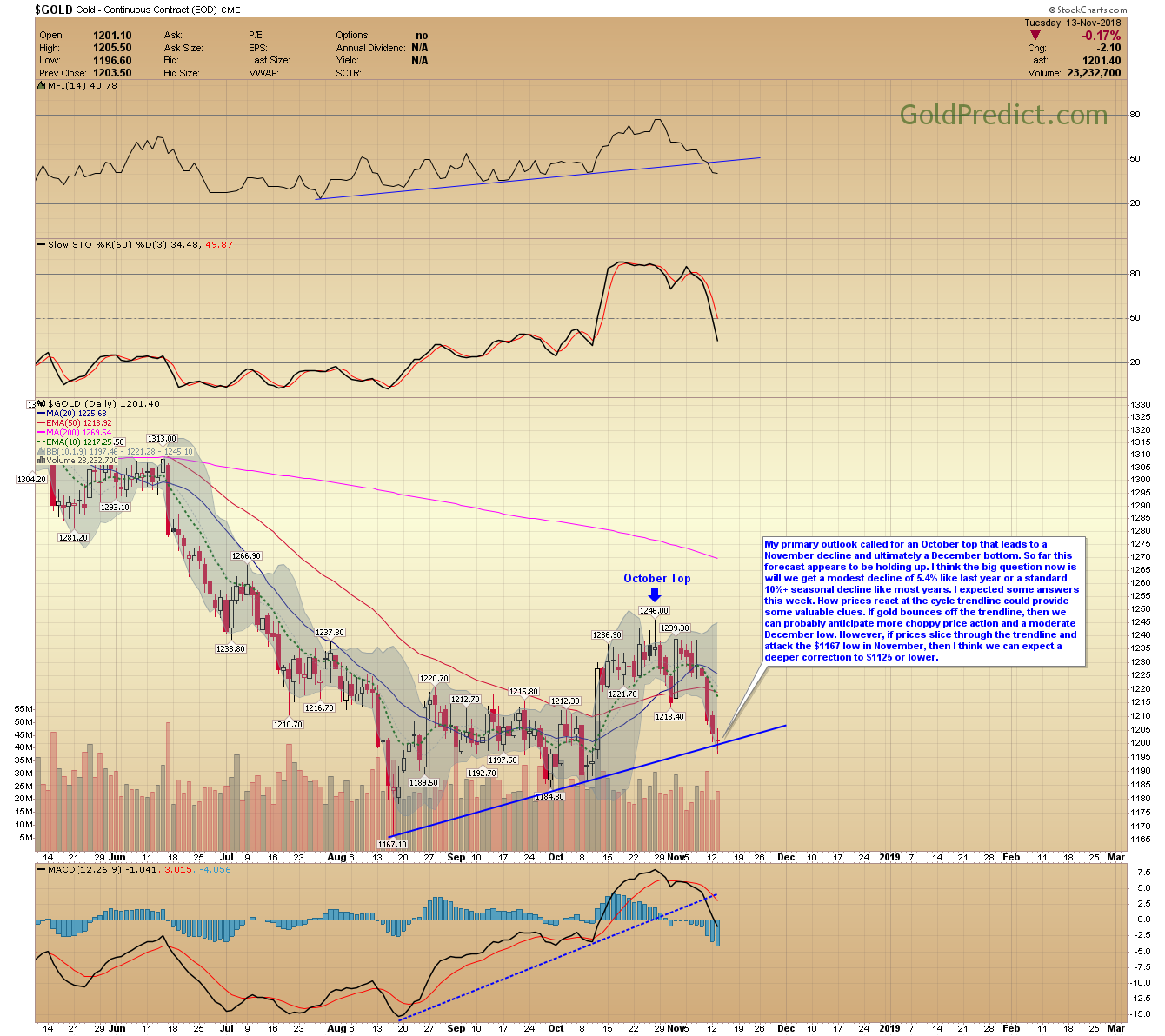 -SILVER- Like gold, silver is at a dangerous crossroads. Will prices bounce off the September low or begin to collapse? It’s anybody’s guess. I can say this – the meager $1.00 bounce out of the September low was unimpressive and that supports a breakdown. 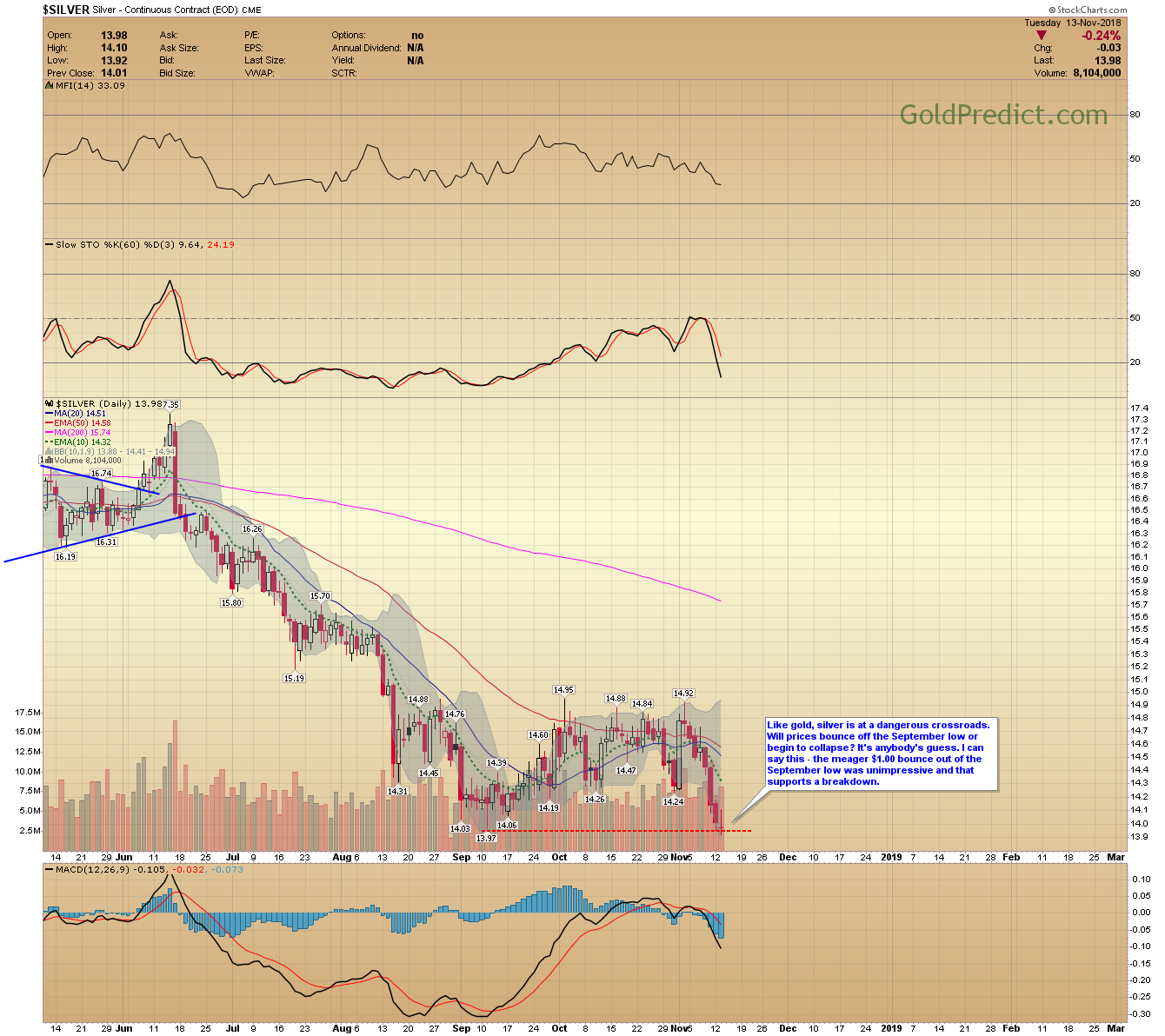 -GDX- Miners failed to complete the bullish hammer reversal. There is still no evidence of a complete breakdown like I suspected below the cycle trendline. If gold bounces off the trendline then miners should follow. If gold breaks sharply lower, expect a 4%+ down day in GDX as investors acknowledge a breakdown. 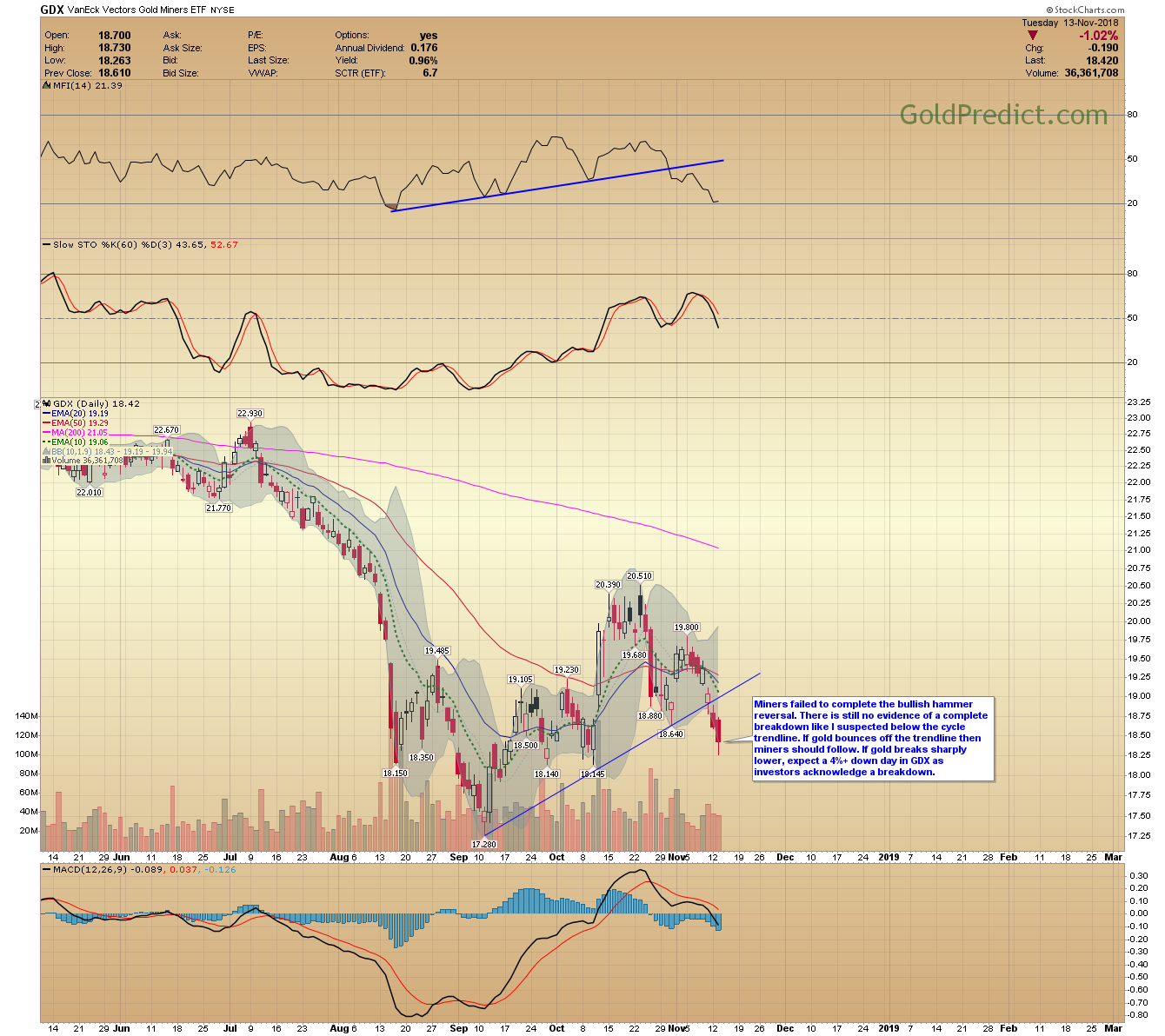 -GDXJ- Juniors made a new closing low. The MFI (above) is oversold and in an area that could produce a reaction low. 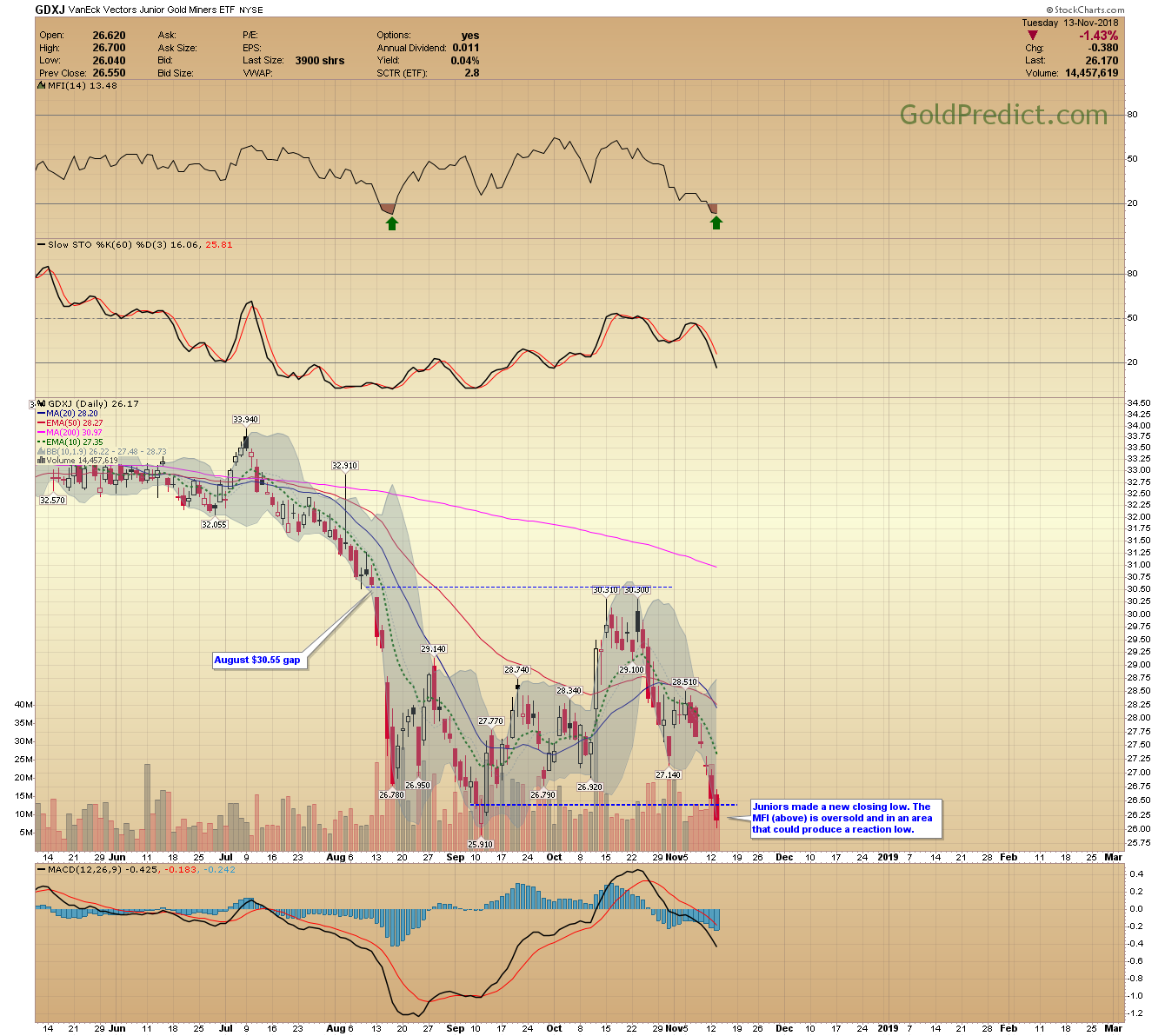 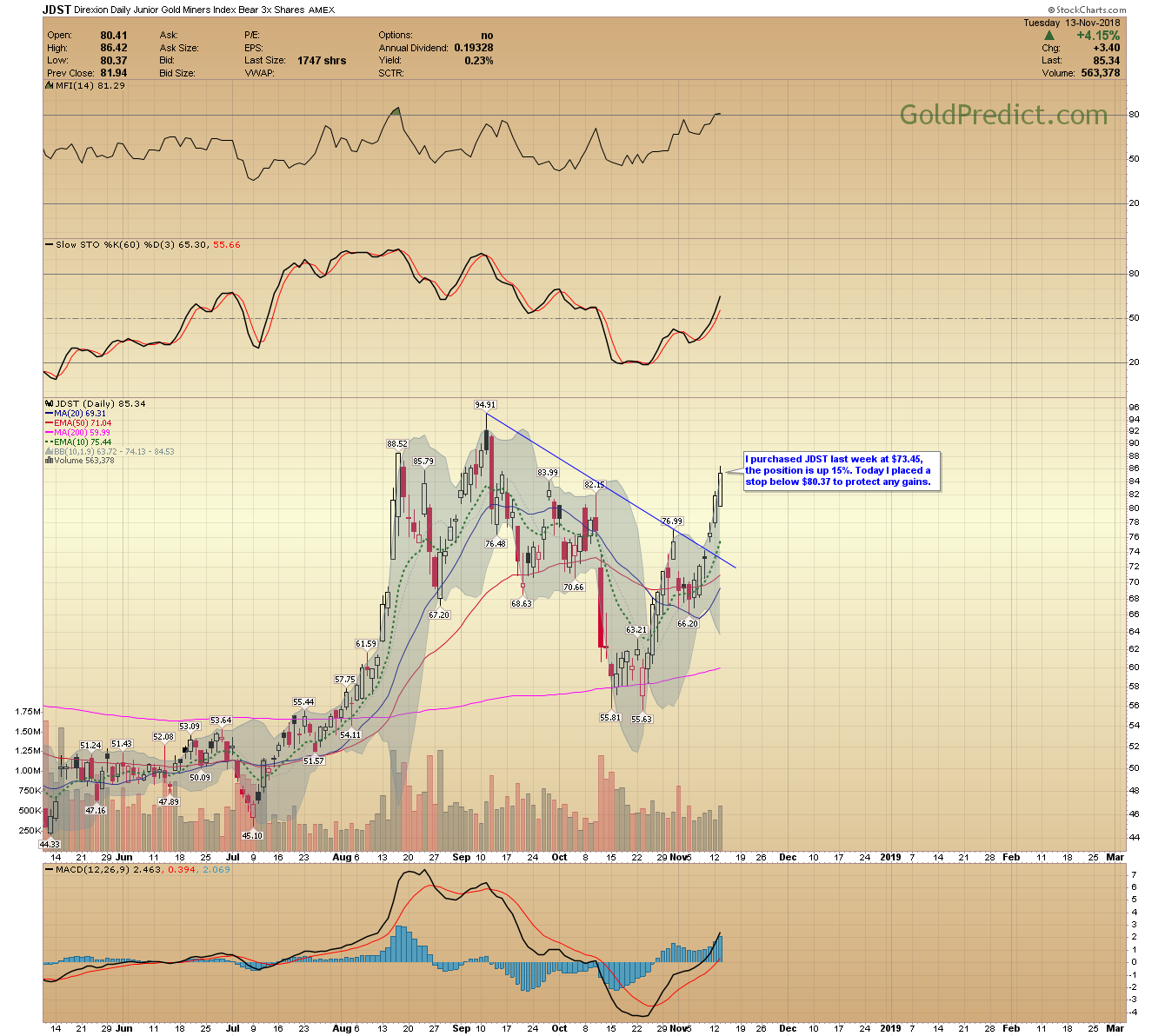 -SPY- Prices closed progressively below the 275.30 gap. The odds now favor a second gap fill at 268.12. I’ll look to buy that gap fill. However, caution is warranted. Progressive closes below 268 could produce a retest of the 259 low or perhaps a secondary breakdown. I don’t see anything to support the bearish scenario at the moment. 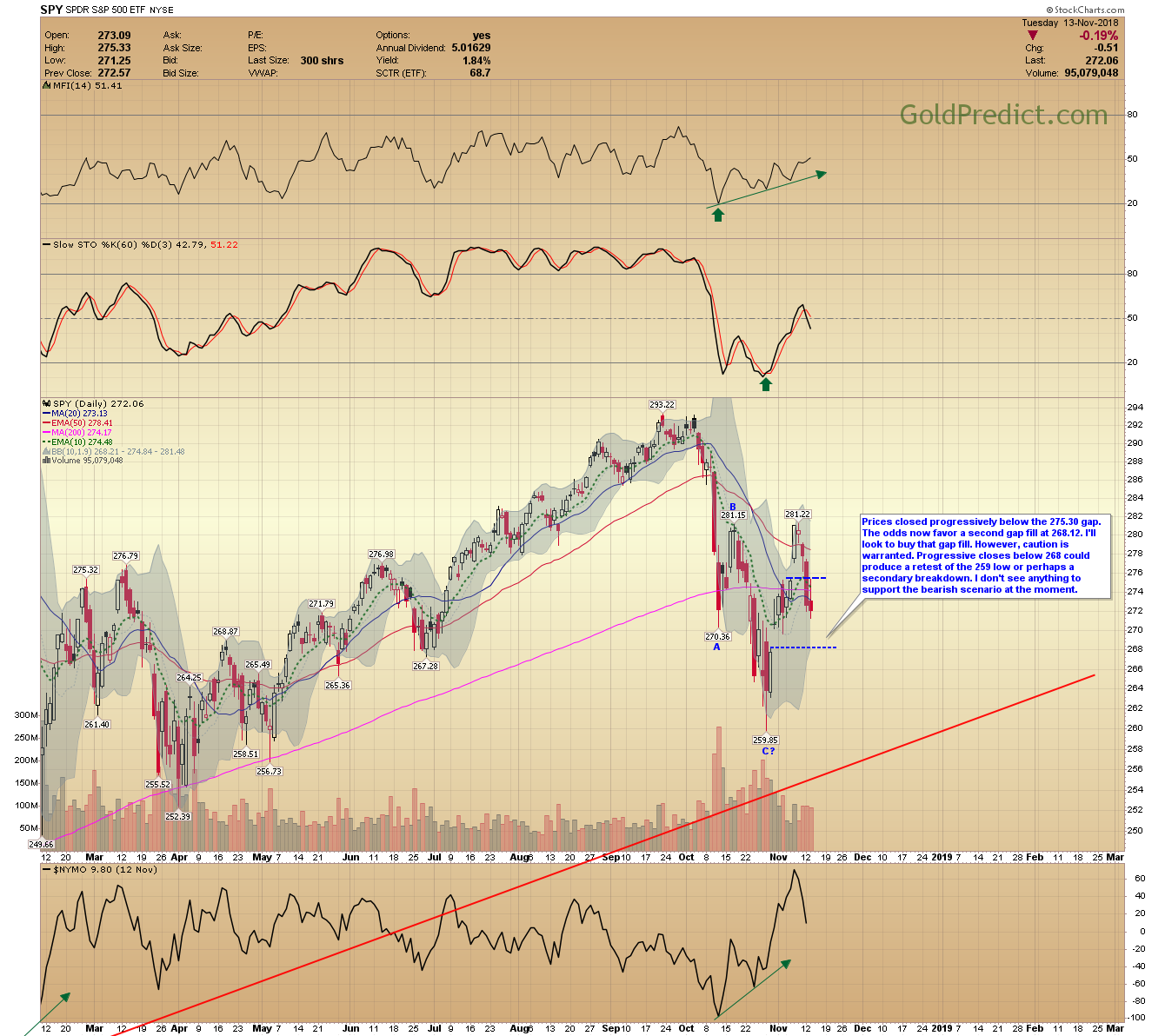 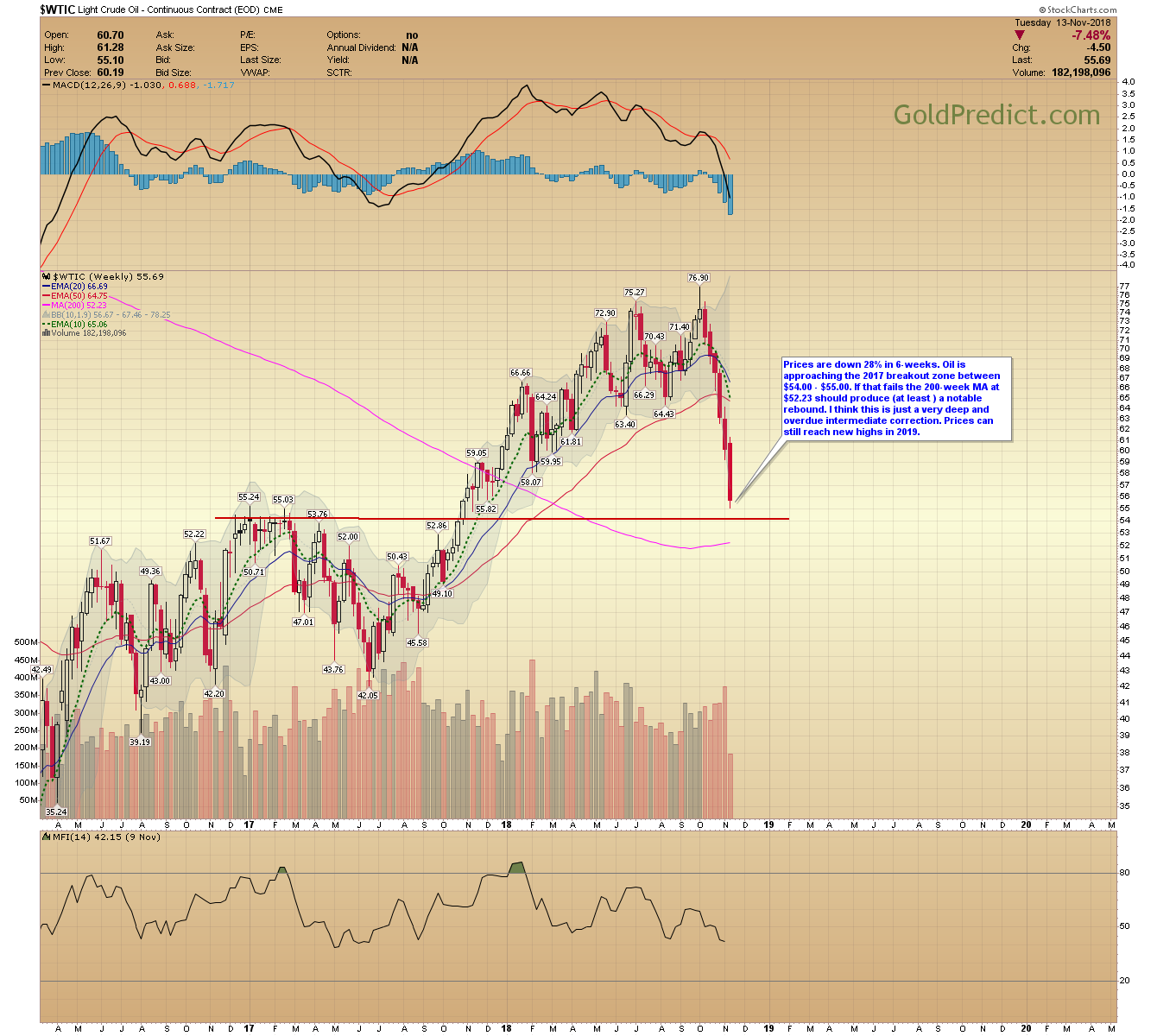 -UWT- The decline in oil has been unyielding. I’m tempted to enter an initial long position in the triple leverage oil fund UWT. I’ll keep an eye on things and advise if/when I take the trade. 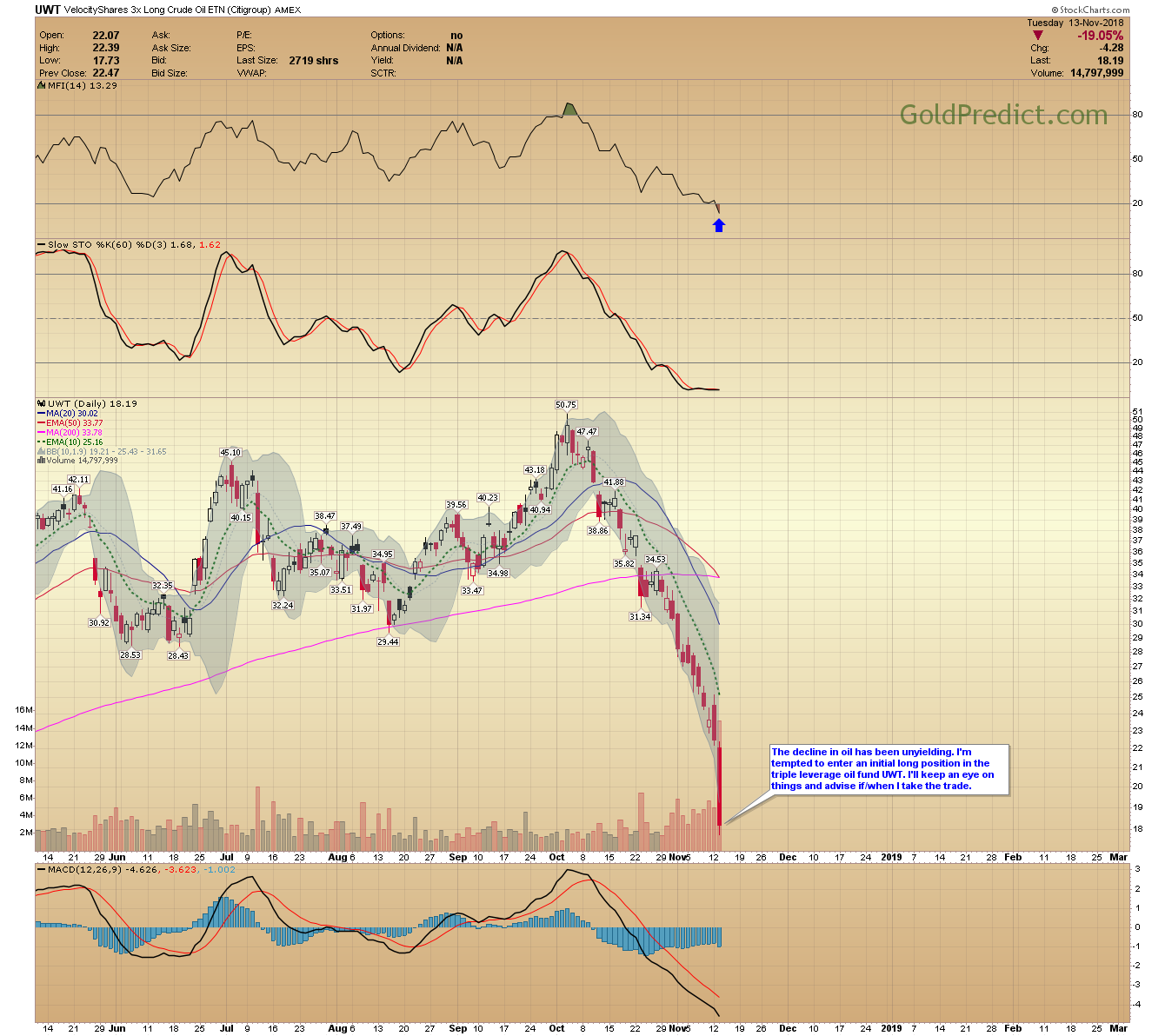 I’ll post a brief update tomorrow morning before I leave.

Have a wonderful night.

This article was published Posted on November 13, 2018 in Categories Reports