There are many calls for a new bear market in stocks; I don’t see it just yet. In my opinion, several pieces of the recession puzzle remain missing. Nevertheless, the bearish talk caused me to go back and reevaluate the charts for clues…and I uncovered an interesting observation in the oil market. Higher oil prices along with rising interest rates trigger most recessions. But before oil spikes to “recession-level” highs, there is usually a washout period (like now). If this pattern repeats, oil should bottom within the next few months, and potentially begin a 300%+ rally lasting 18-24 months. 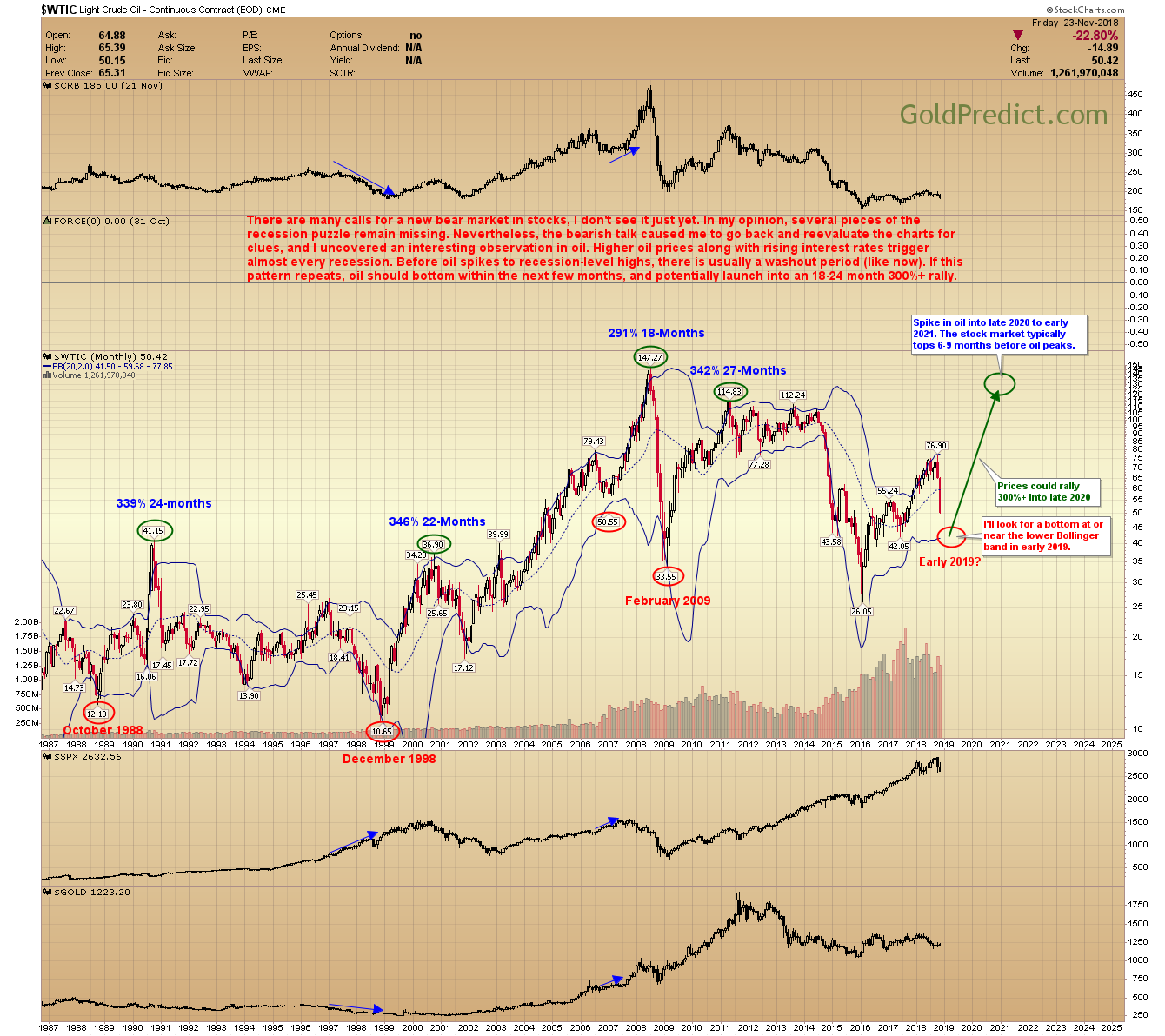 The 2007 washout low in oil didn’t arrive in an “eight-year,” but it still preceded a recession. Prices bottomed below the Bollinger band at $50.55 and rallied 291% in 18-months. That was more than enough to thrust the economy into recession.

Current Thoughts: I believe oil will continue lower (maybe a bounce here or there) and reach a final low in early 2019. The breakdown in the CRB supports this theory. From that bottom, I think oil could enter an explosive rally lasting 18-24 months. Surprisingly, the rallies out of 8/9 lows were very close percentage wise (339%, 346%, and 342%). A similar 340% rally into late 2020 holds the potential for a double top around the $147 level — provided oil bottoms near the lower Bollinger band (currently at $42.05).

Of course, this is all speculation, but I think it’s worth further investigation. If the pattern repeats, the prepared investor could make some serious gains. If and when the time comes, I’ll look to buy UWT, ERX, and out of the money (OTM) 2021 calls options in XLE and USO.

-CRB- The CRB broke the head and shoulders neckline, and it looks like prices are dropping into a 3-year low. This corroborates the oil outlook, in my opinion. 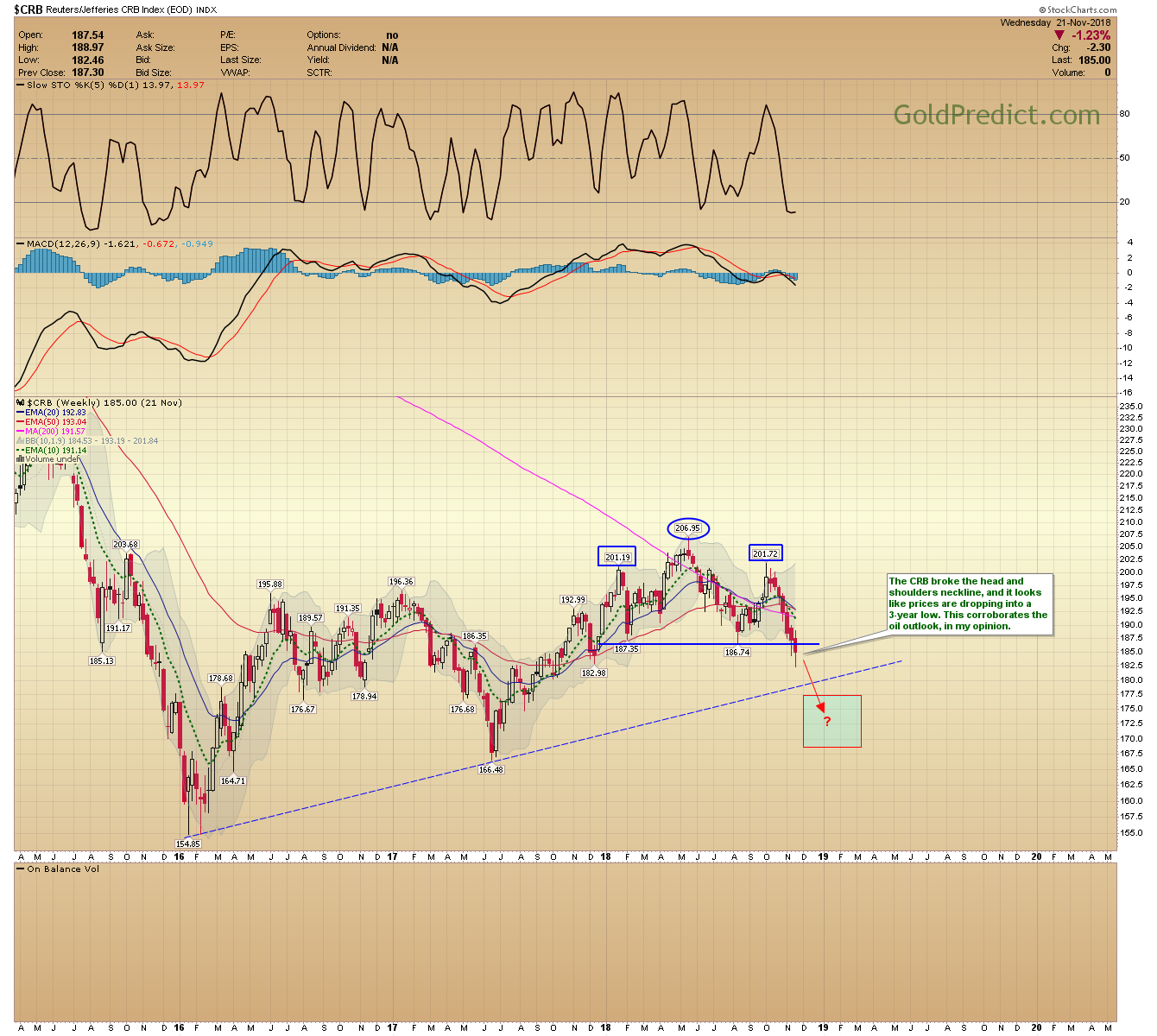 -WTIC/STOCKS RATIO- Remember the oil/stocks ratio? The RSI (top) typically tests the 80 level before we approach a recession. The RSI reached just 68 in March. Therefore, I’m hesitant to believe stocks are entering a new bear market. 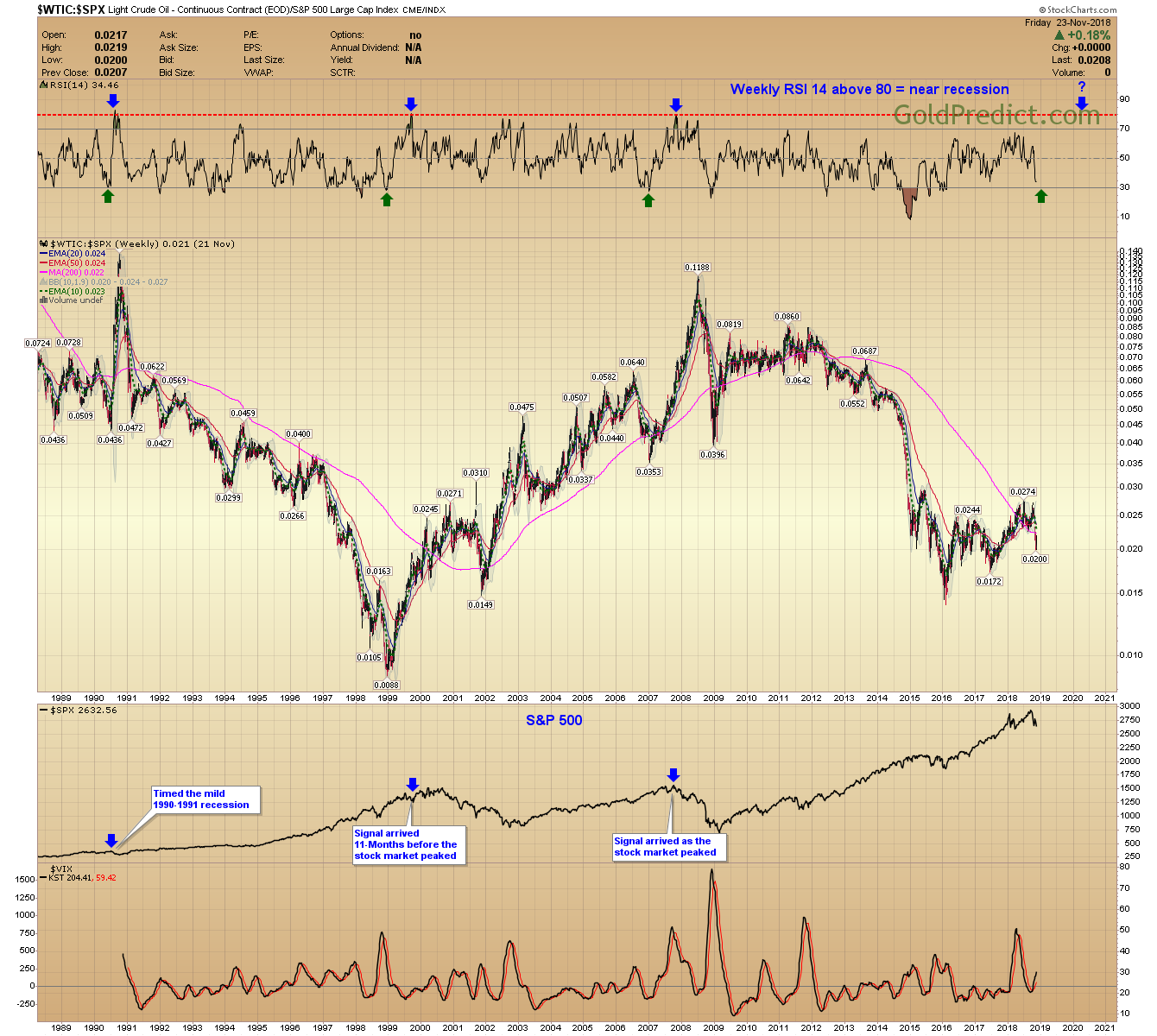 -GOLD- I’m still under the impression this is just a rebound and prices will turn lower in December. It’s unclear when or where this rebound will end. Progressive closes below the 10-day EMA will establish a top. The next 30-day low should arrive between 27th and 31st of December. 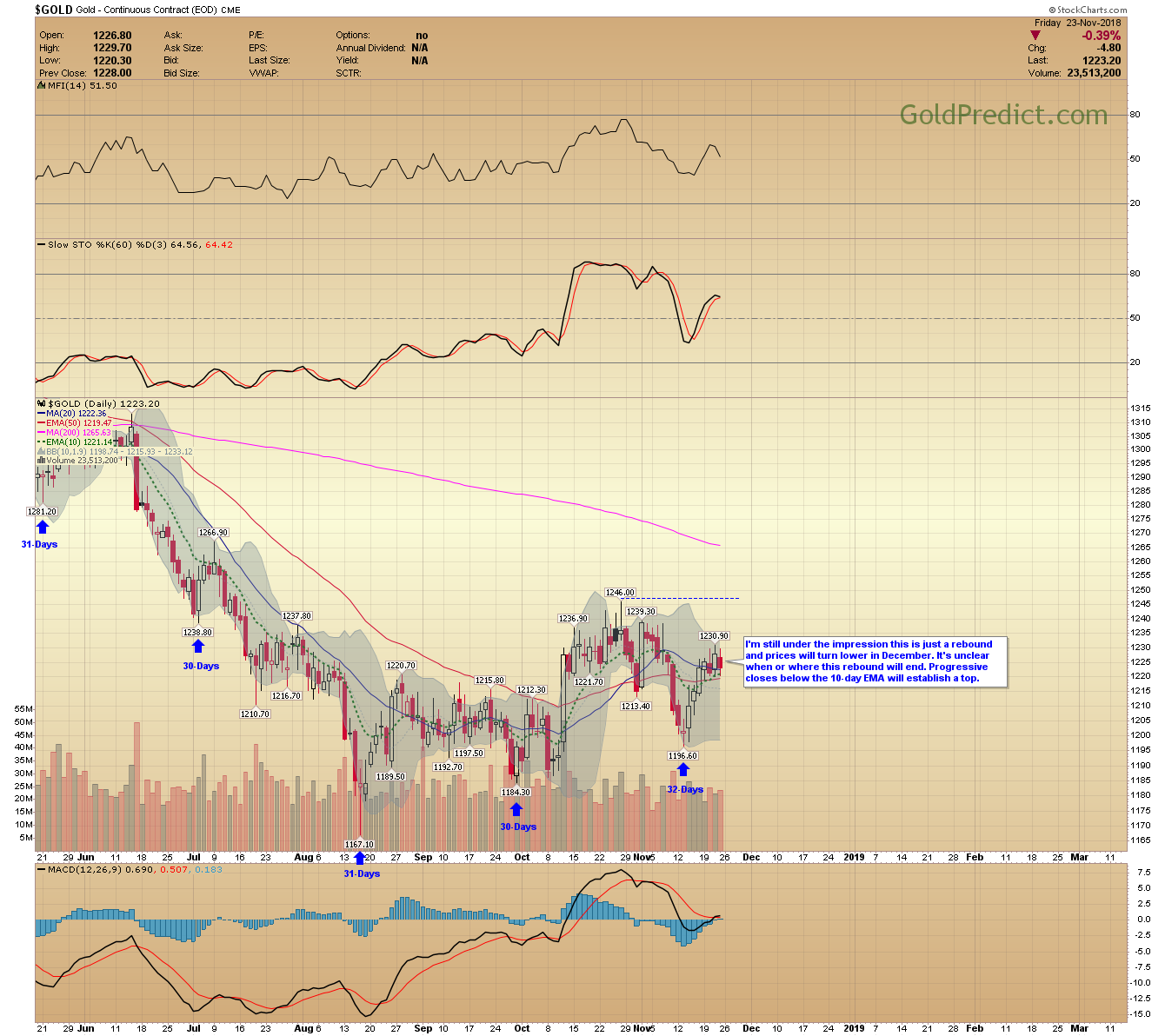 -SILVER- Prices are difficult to weigh, there is little follow-through in either direction. Nevertheless, I think we will reach new lows in December. 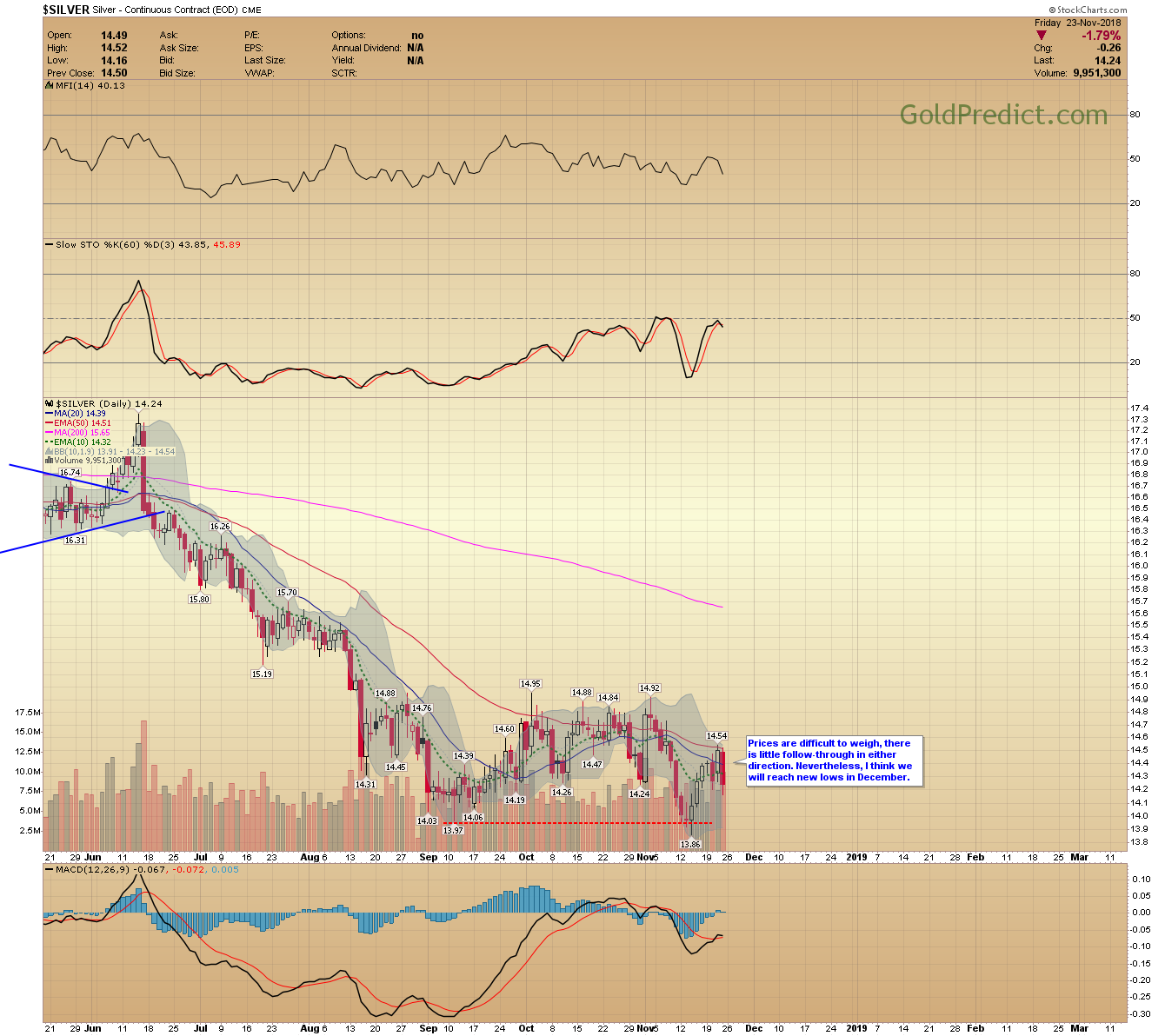 -GDX- Miners formed another swing high. Prices would have to close below the $19.09 level to support a top. Otherwise, we could see a continued bounce for 1-2 weeks. There is no discernable trend at the moment. 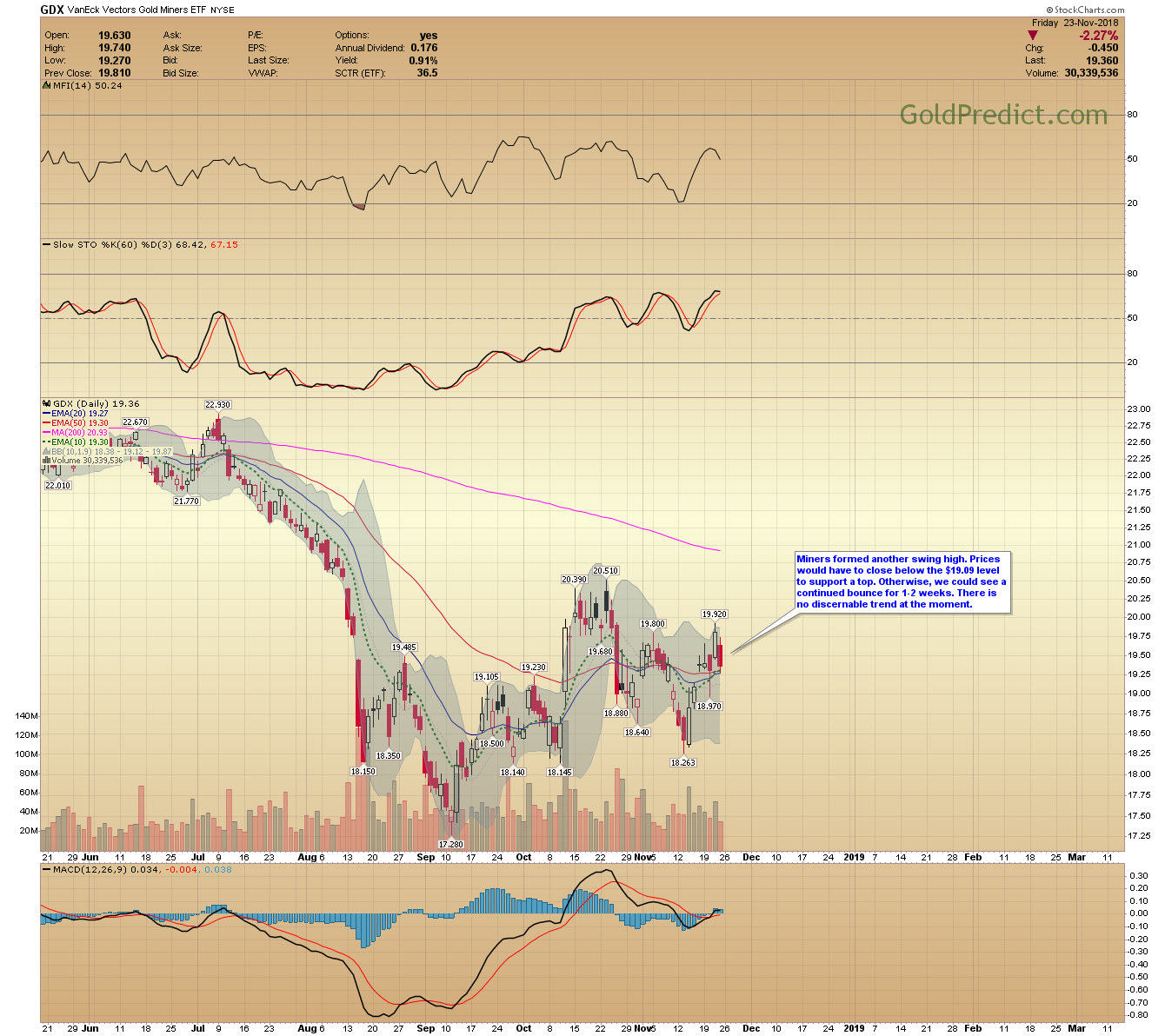 -GDXJ- Juniors would have to close below $27.12 to support a top. Until that occurs, the bounce may continue or prices will remain choppy. 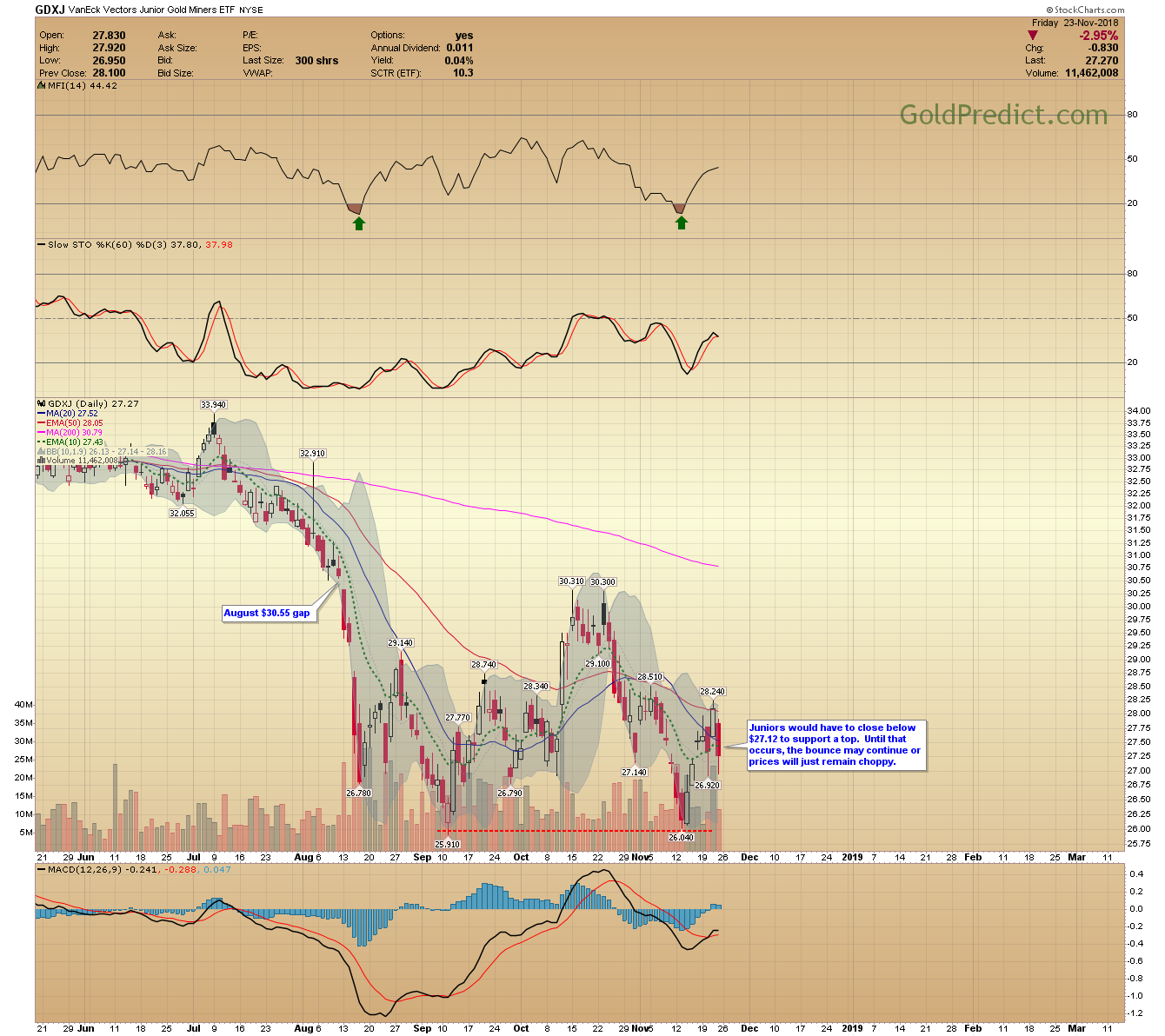 -UWT- Oil is incredibly overdue for a bounce. I took a stab at picking a bottom with today’s massive down gap. I entered a small initial position at $14.15. Big volume today. I don’t think prices will reach a final bottom until early 2019. I’m just trying to play a 1-2 week snapback rally. I’ll jump off the tracks and exit the trade if UWT closes below $12.50. Perhaps sooner if I don’t like what I see. 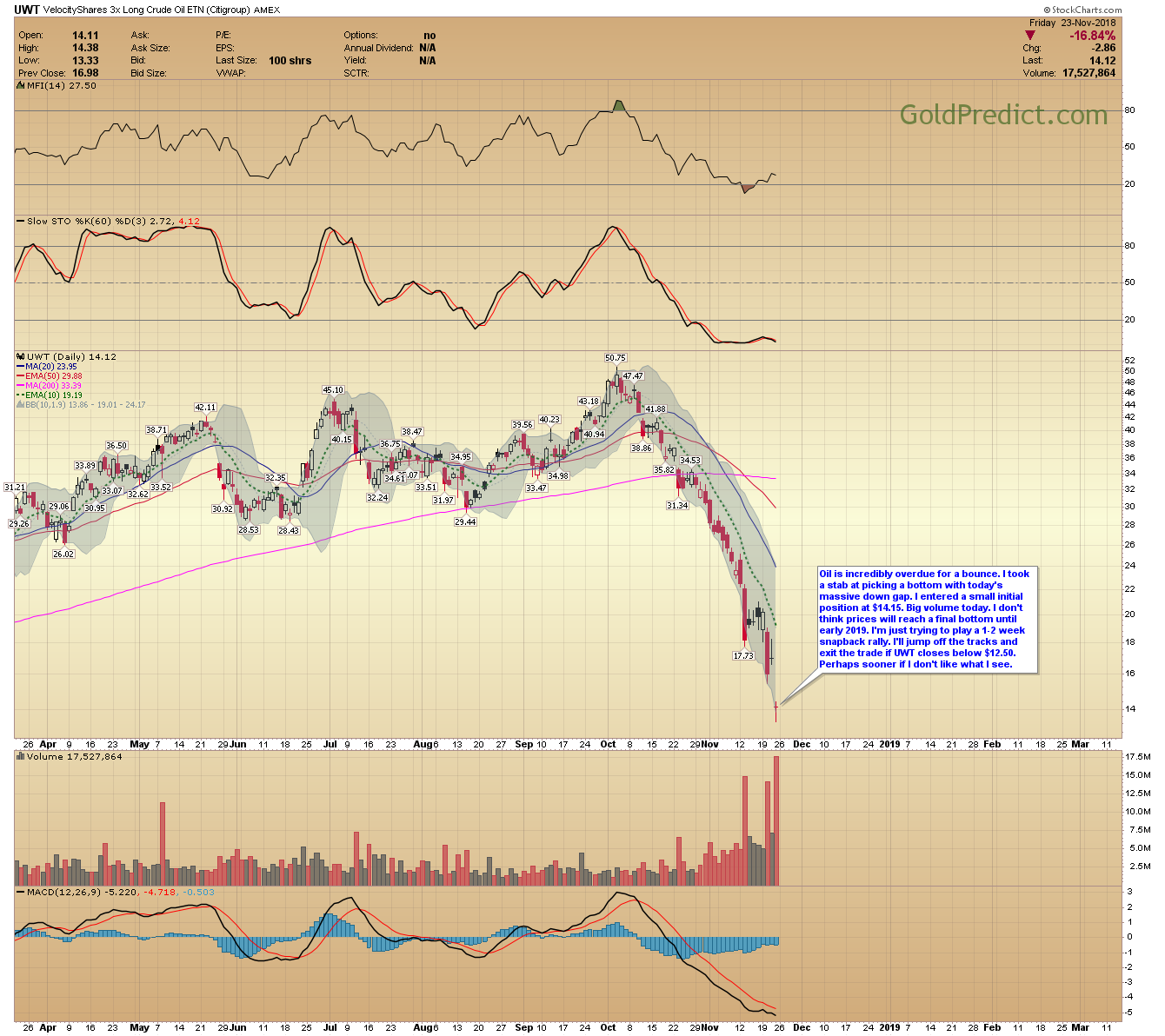 I don’t see a specific trading advantage in metal or miners at the moment. Once this rebound appears complete, I’ll attempt to play a downswing into late December.

I’m excited about the potential in oil. Precious metals should also turn higher in 2019, but I think oil will be the early leader. Gold will probably take over the lead as we get closer to a recession.

Exciting times for sure. I think 2019-2021 could be very profitable trading years if things play out as expected – so stay tuned.

This article was published Posted on November 25, 2018 in Categories Free Updates, Weekend Newsletters