Platinum remains the worst-performing precious metal. Prices are just above significant support at $750. If that level fails, then a decline to $650 is in the cards. Why is platinum out of favor – will it stay that way forever? At some point, something will cause a bottom and prices will rip to the upside. Why are catalytic converter manufacturers using palladium when platinum is nearly $600 per ounce cheaper and does the same job? Someone will realize this, and the price disparity will disappear.

Traditionally, platinum prices have almost always traded higher than gold. In fact, on a few occasions, platinum was double the price of gold. In the United States, “PLATINUM” depicts the highest achievable level for that particular service. Why is that? Because it is rarer and more precious than gold.

I like platinum here for a long term investment. Last year I traded some gold coins for platinum eagles. I call this a ratio trade – it doesn’t really cost me anything besides shipping, but I increase my precious metal holdings. When platinum prices reverse and become overvalued, I will trade them for whatever is undervalued at that time. 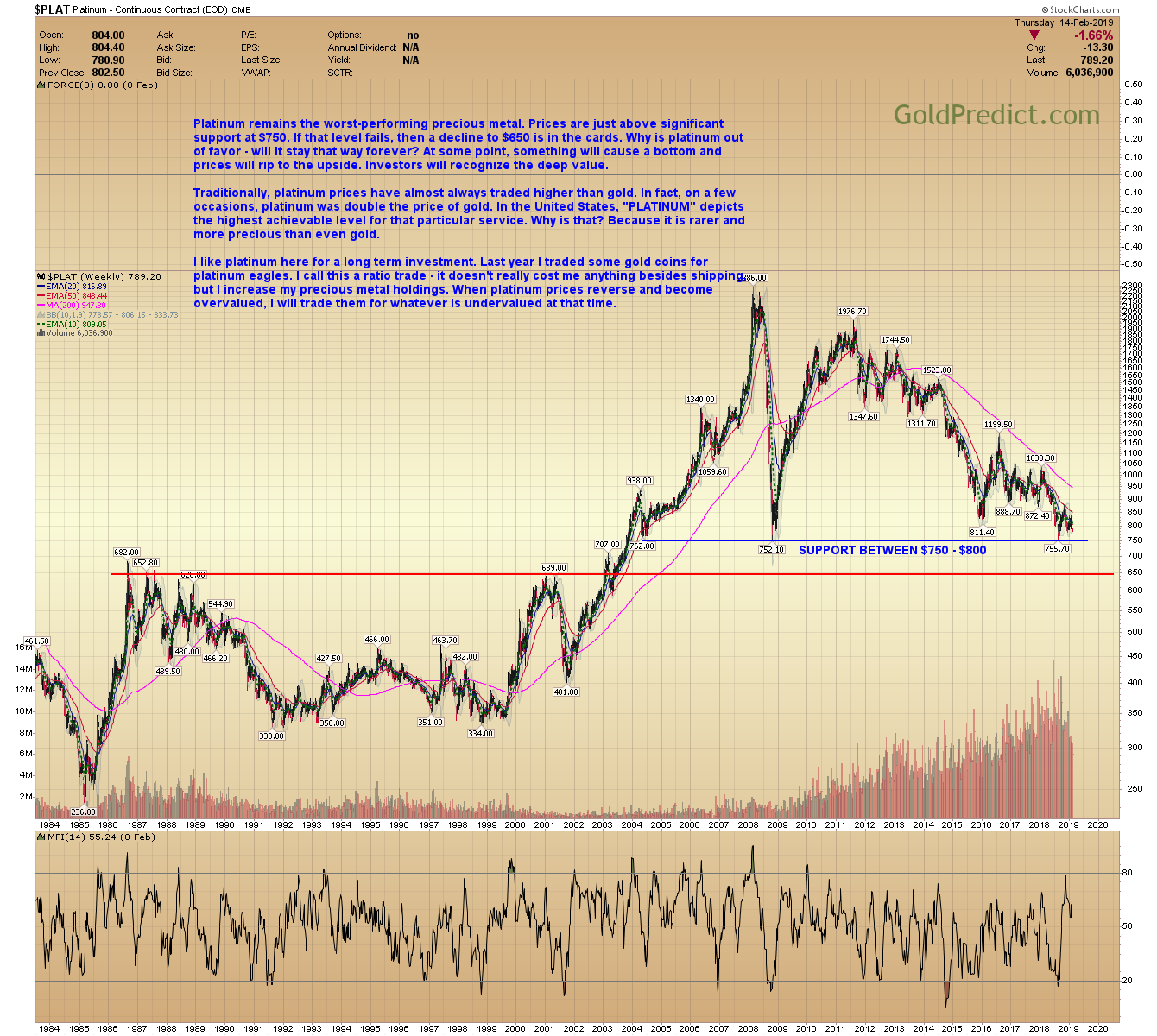 -PALLADIUM- On the other side of the spectrum is palladium. Prices continue to reach new all-time highs as platinum remains near its 2009 low. The tables will eventually turn, and palladium will fall back out of favor. At some point, the catalytic converter manufacturers will ask themselves why are we using palladium ($1385) when platinum ($789) is nearly $600 per ounce cheaper – they do the same job. Note the crash in palladium from 2002 – 2003.

-PLATINUM VERSUS GOLD RATIO- Here is the platinum versus gold ratio chart. Long-term investors may consider switching some of their gold holdings into platinum when the ratio drops below .80. When the ratio exceeds 2.0 (platinum price is double that of gold) consider switching back into gold. Currently, the ratio is at .601 – the lowest I’ve ever seen. I felt members should know what bargain platinum is right now. 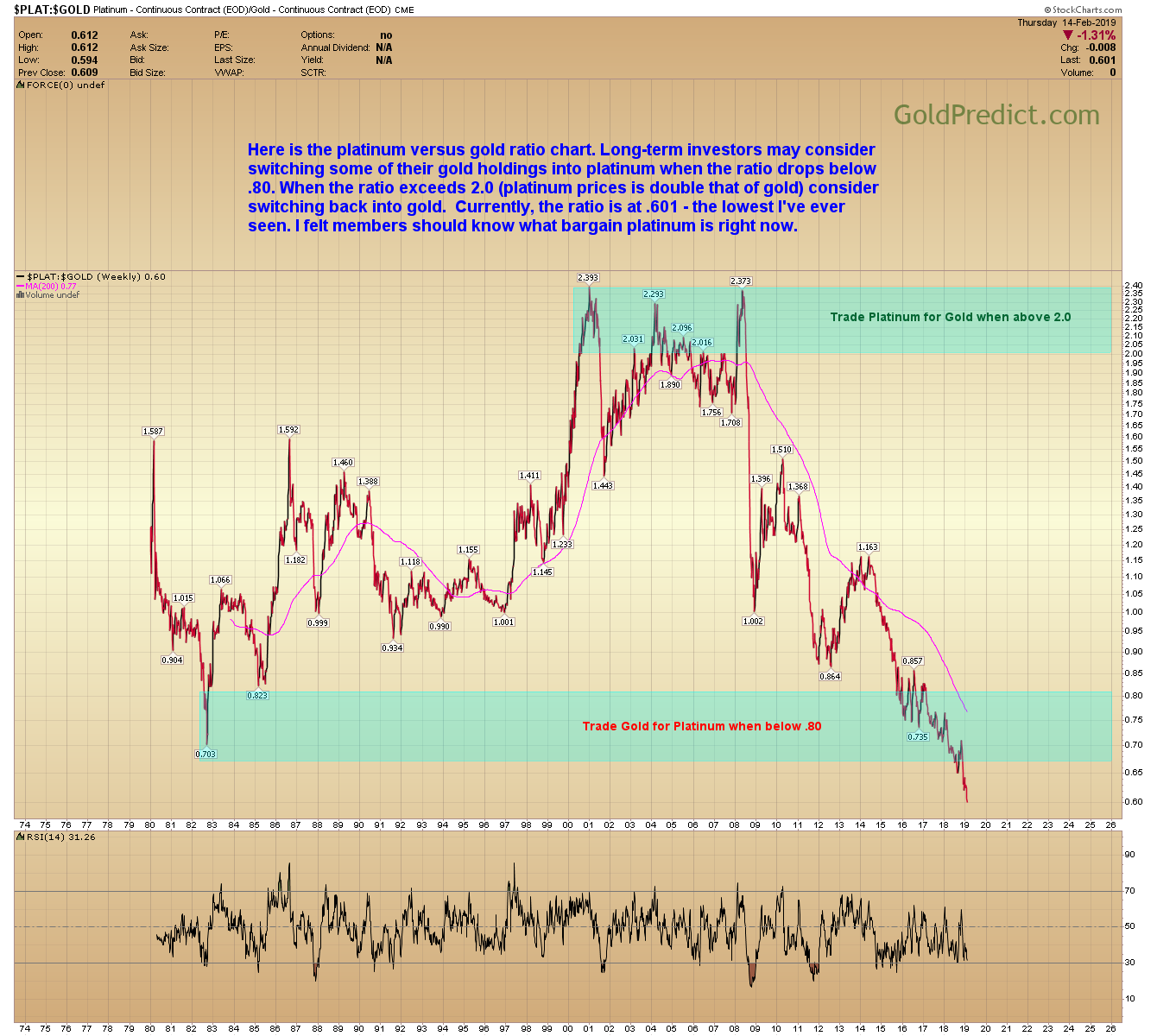 -GOLD- Prices were breaking down until the retail sales numbers at 8:30 AM. That leaves us stuck in a range a little bit longer. The short-term momentum is beginning to shift to the downside unless prices close decisively above $1,321.70 in the coming days. 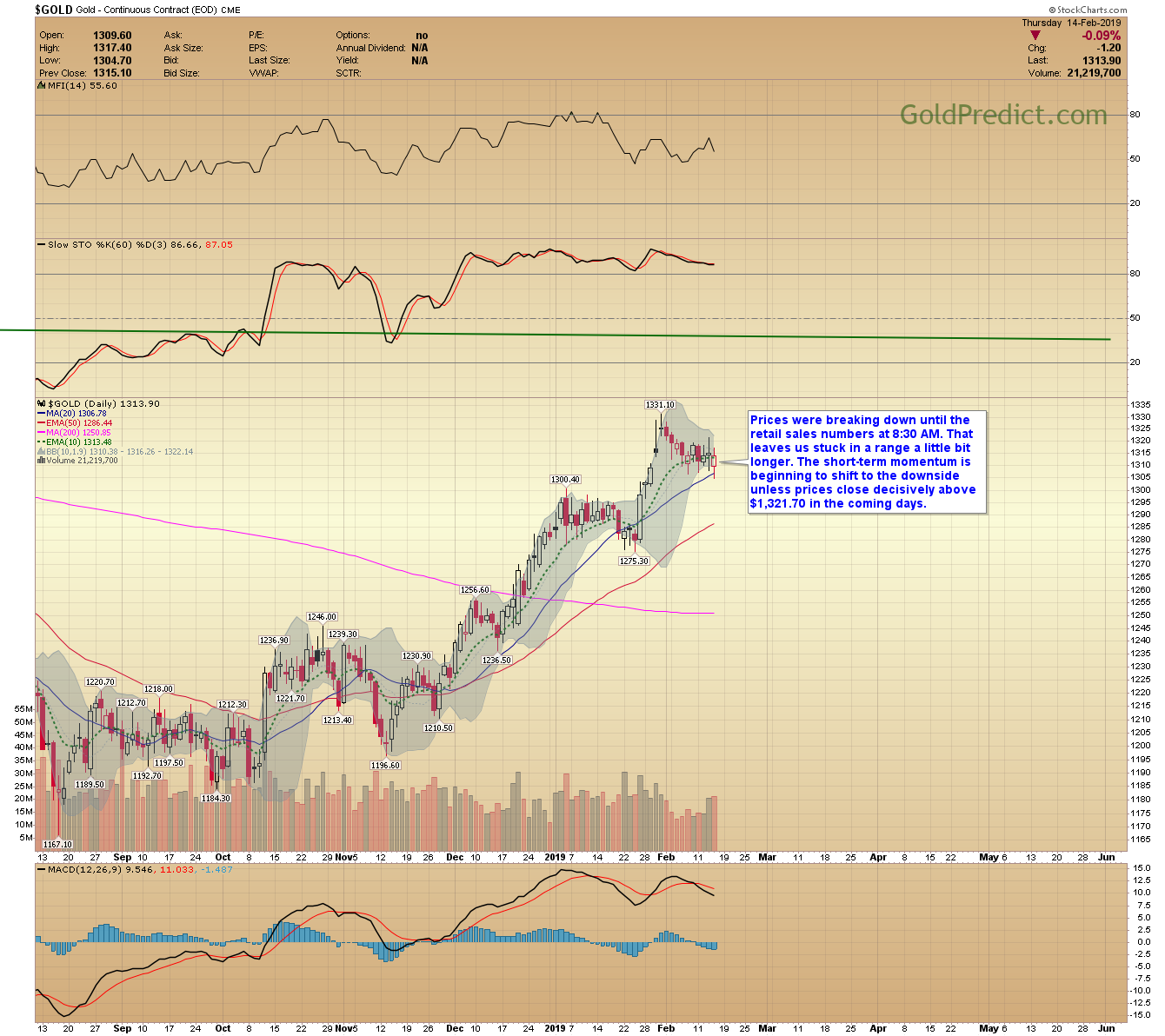 -SILVER- Prices closed below the small consolidation zone and are approaching the 50-day and 200-day averages. A test of $15.20 – $15.30 seems likey before prices try to bounce. 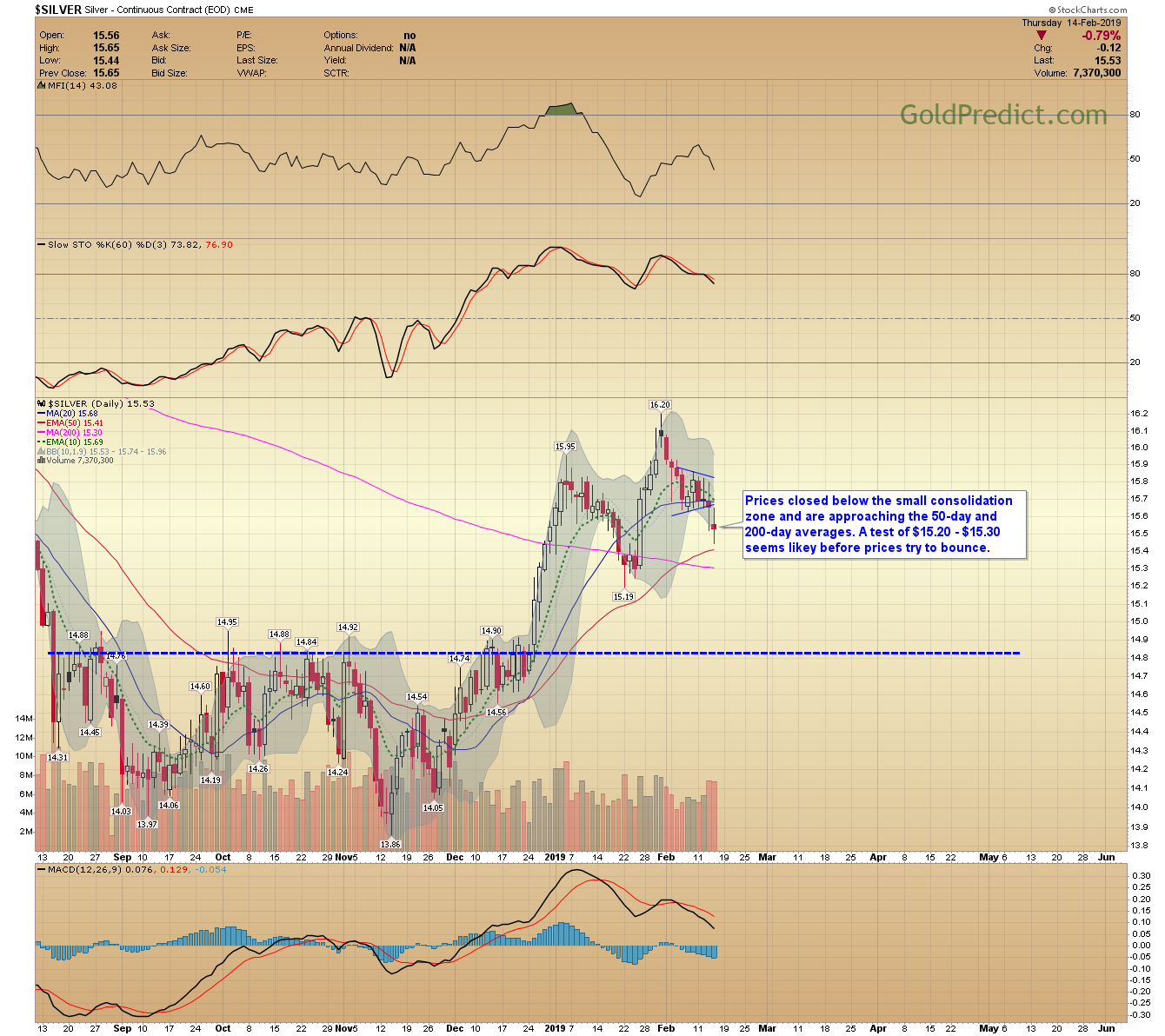 -GDX- The poor retail sales numbers prevented an immediate breakdown this morning. That leaves us stuck in the consolidation a bit longer. 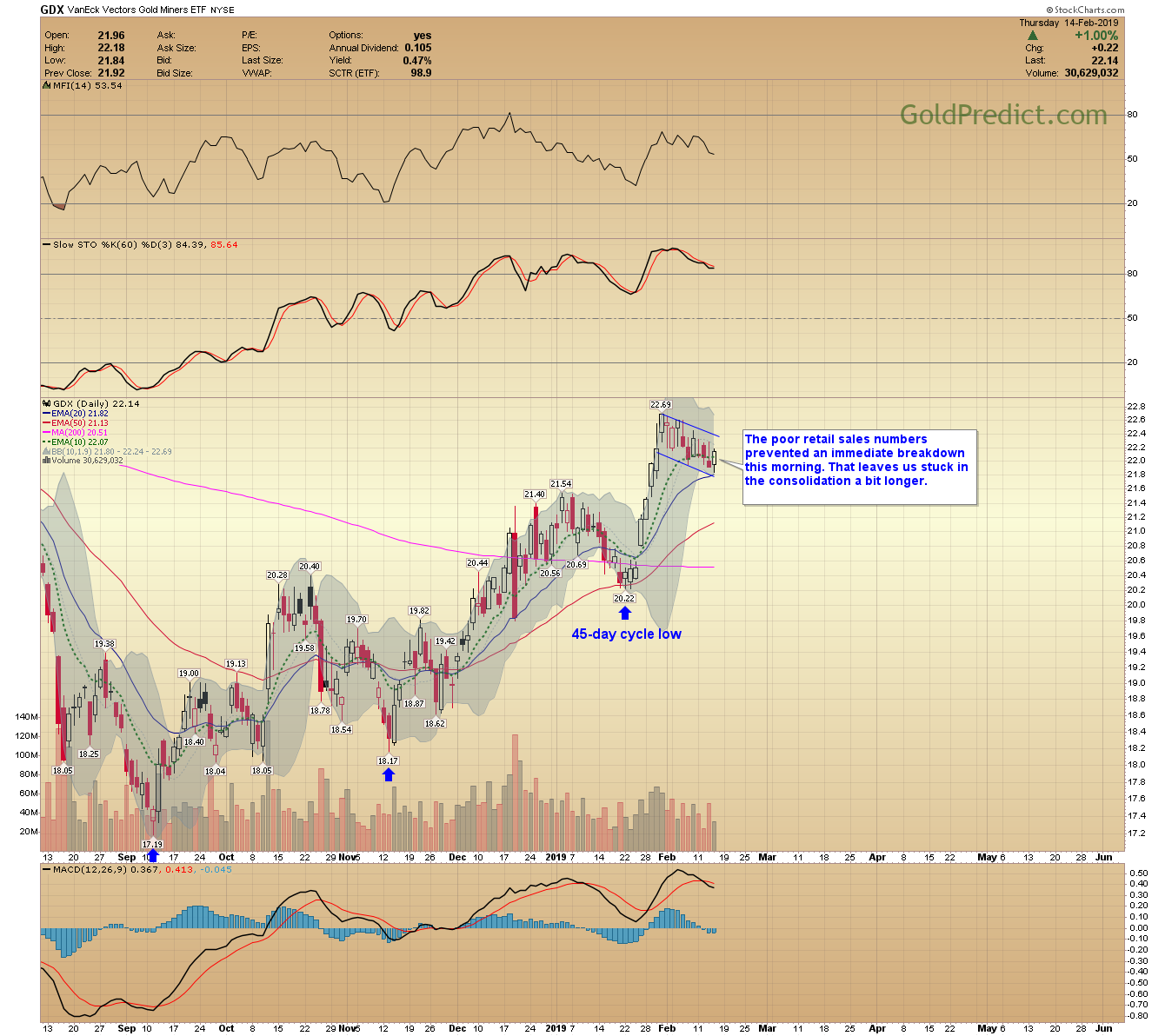 -WTIC- Prices finished above $54.25. The bulls and bears are battling over crucial ground. The bears need to push prices back below $53.00 if they are going to prevent a jump to $56.00. 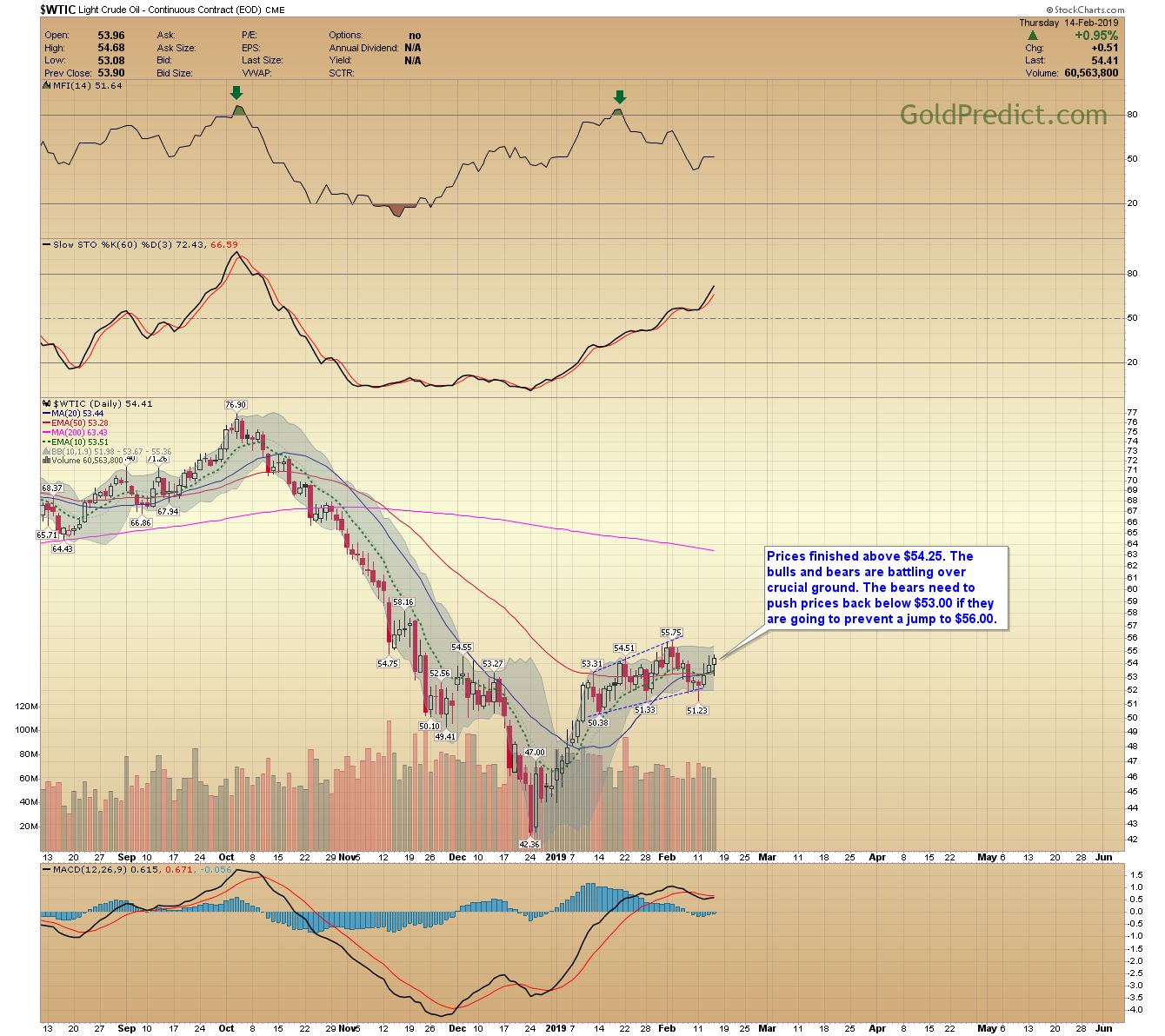 This article was published Posted on February 15, 2019 in Categories Free Updates, Reports