Over the last few years whenever gold approaches the $1360 level, the price action gets a little volatile…perhaps even violent. One day the short-term model supports an upside breakout – the next day a failure. It’s like two heavyweight boxers going at it. You know somebody’s going to take a nap, but you’re not sure who. Punch-after-punch they brawl until only one remains standing. That’s gold when it approaches $1360; the Bulls and the Bears fight it out like heavyweight contenders.

As I explained earlier in the week, several individual mining companies and ETF’s are on the edge of a potential breakout. It seems like all they need is a spark to blast through resistance. I imagined Wednesday’s FOMC minutes could be that spark – it wasn’t. Now, it’s beginning to look like the trend is fading. Nevertheless, that could change in an instant with the right financial spark.

What are some immediate concerns that could push gold above $1380? Maybe a breakdown in trade negotiations with China or perhaps a monumental shift in the Mueller investigation or one-hundred other things. Political tension in the US and around the world is elevated and rising. I don’t see that changing anytime soon. At some point, it could boil over into civil unrest and rioting. In this environment, the conditions remain primed for a financial spark that sends gold suddenly higher.

-GOLD WEEKLY- Gold prices are once again close to the bull market breakout line. Does the trend have what it takes this time to push through or will the bulls walk away defeated once again? Time will tell – the US Dollar likely holds the keys. I do believe, that when gold does break through $1380 – $1400, there will be enough stored energy to thrust prices to $1500+ rather quickly.

Note: The MFI is back at the trendline that has stopped prices since 2014. 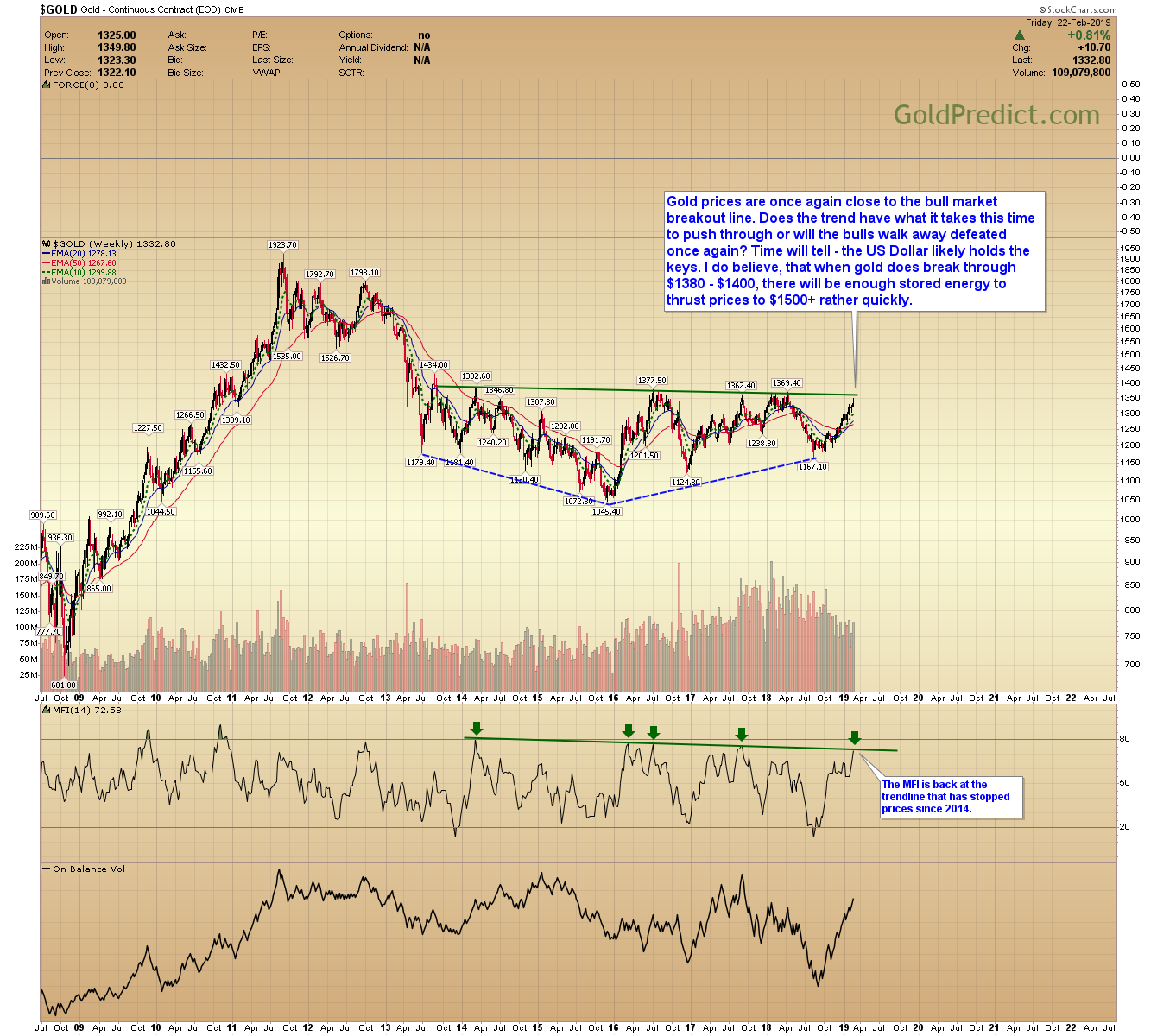 -US DOLLAR WEEKLY- To discern if gold is going to breakout – we need to take a good look at the dollar. Prices formed a weekly swing high, and it appears the dollar is at a critical crossroads.

A breakdown in the dollar below the January 94.64 low would provide the fuel to propel gold above $1380.

Reversing this week’s swing high and closing above the November 97.53 peak would set a course for the dollar to test the 100 to 105 level. 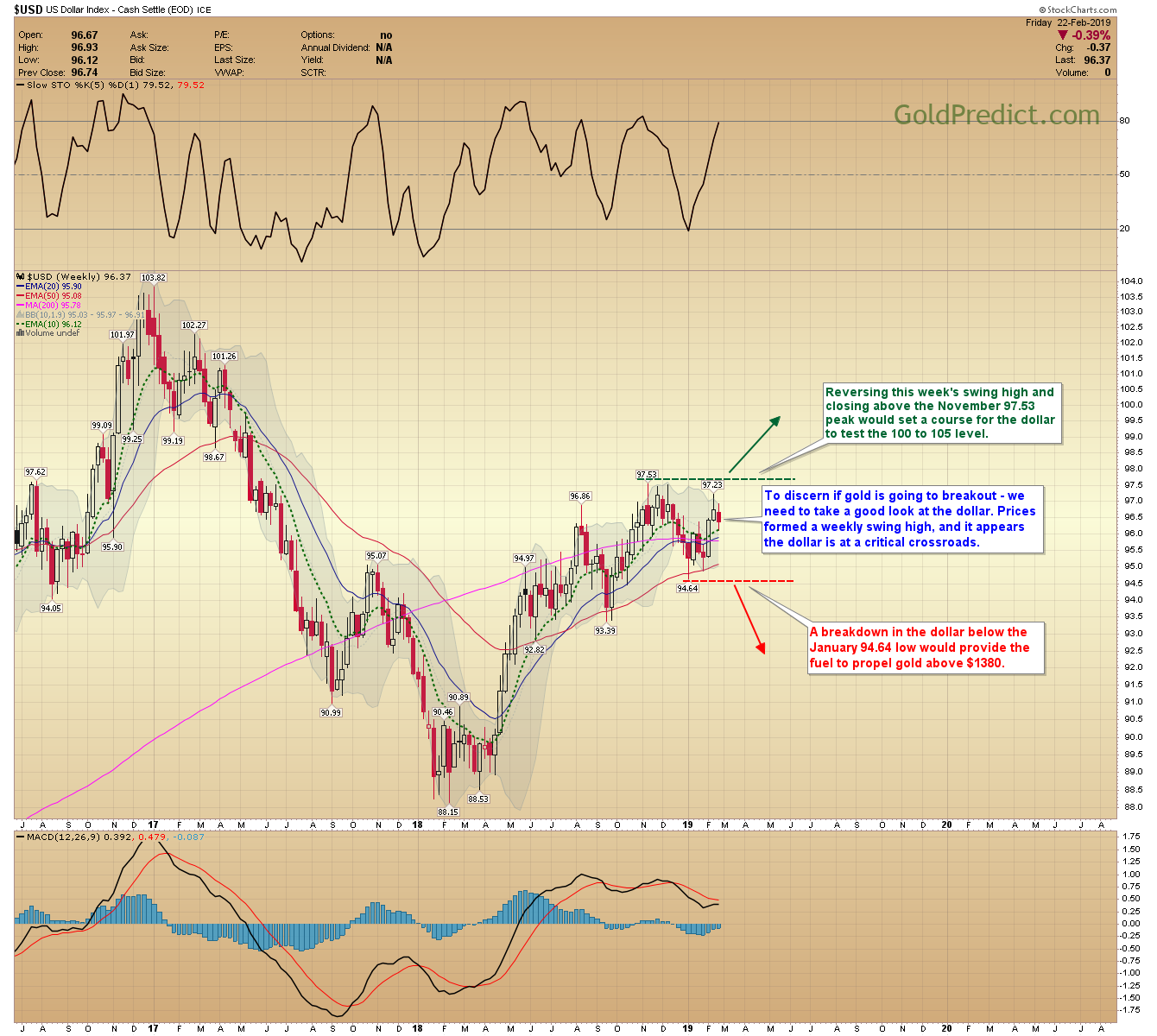 -US DOLLAR DAILY- The daily chart of the dollar has a potential bear flag structure. Breaking lower next week would give gold the boost it needs to test $1360. However, for a breakout in gold above $1400, the dollar would have to collapse below the January 94.64 low. 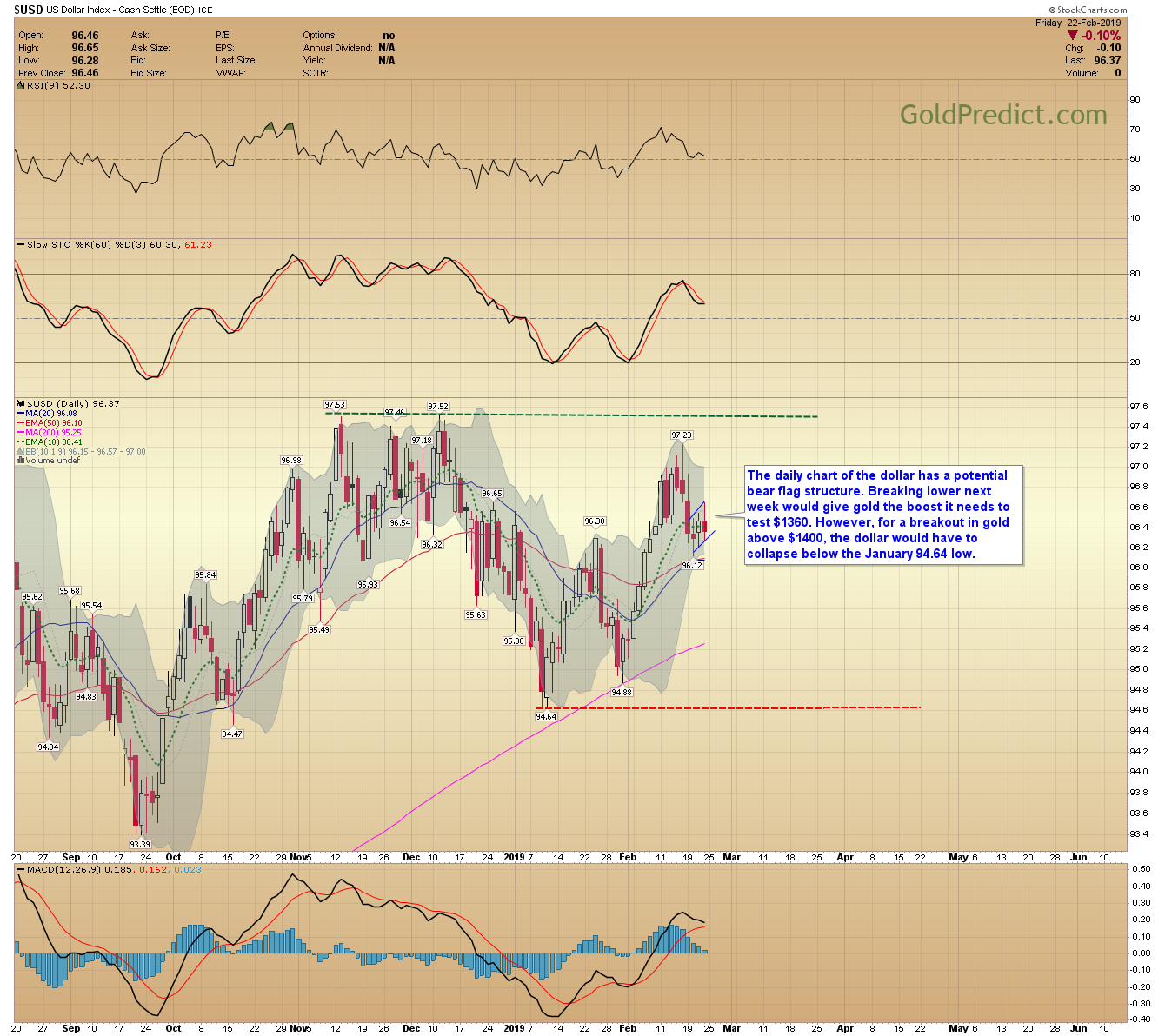 -SILVER WEEKLY- Since 2014, silver has been building a massive base around the $14.00 level. Each rally has been capped approximately one-dollar above the 200-week MA (currently $16.36). That trend suggests that the current move in silver is limited to approximately $17.36. However, like gold, there is a ton of stored energy in these patterns. When the scales finally tip in favor of the bulls, they will likely do so explosively.

As you can see, prices have tagged the modified trendline several times over the last 30-months. A strong weekly close above said trendline would imply a successful breakout. 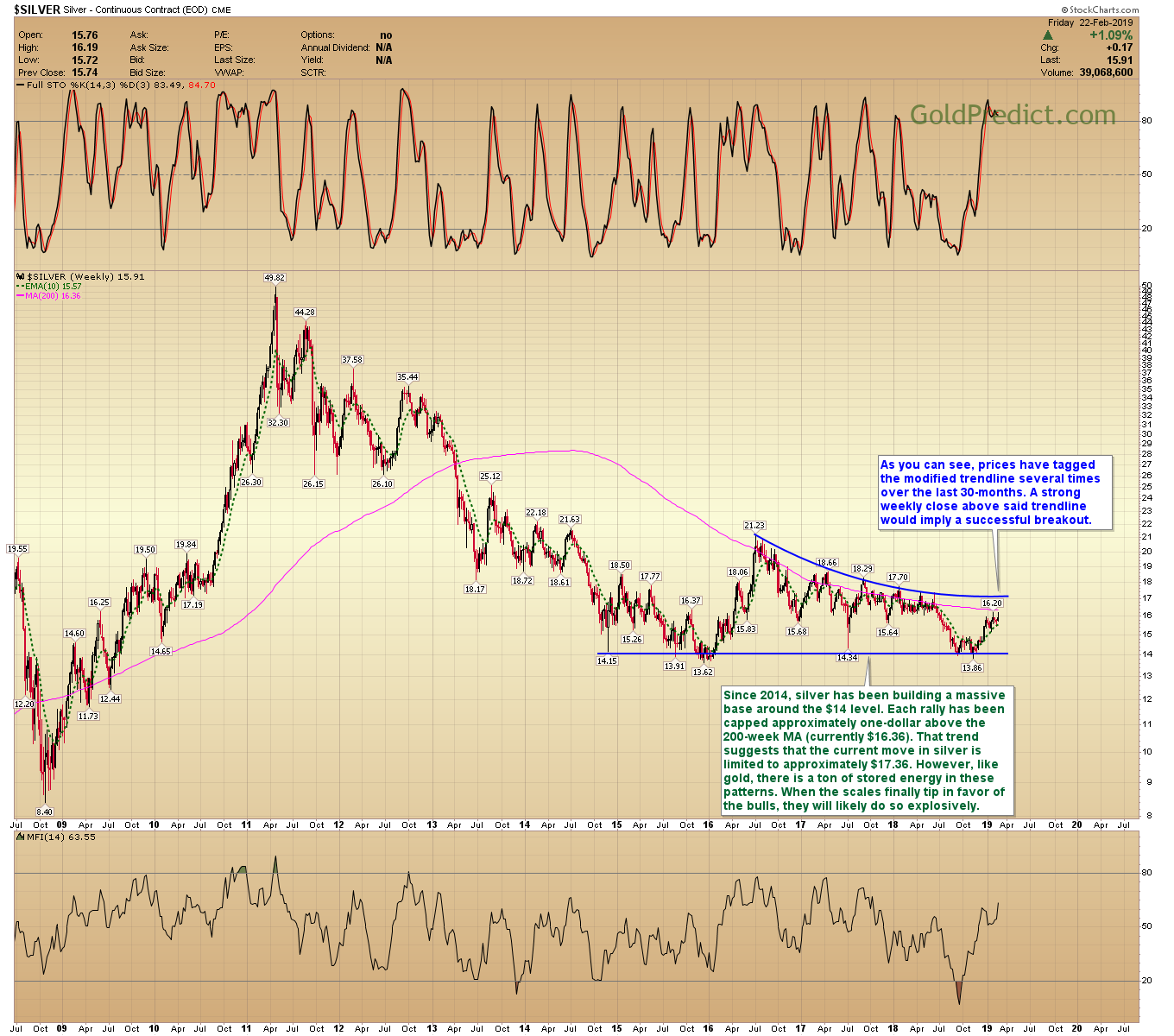 -GDX- Miners finished Friday slightly higher but towards the lows of the session. The line in the sand for GDX remains Tuesday’s $22.43 gap. Closing below that level would prescribe a correction into the next 45-day cycle low due around March 27th. 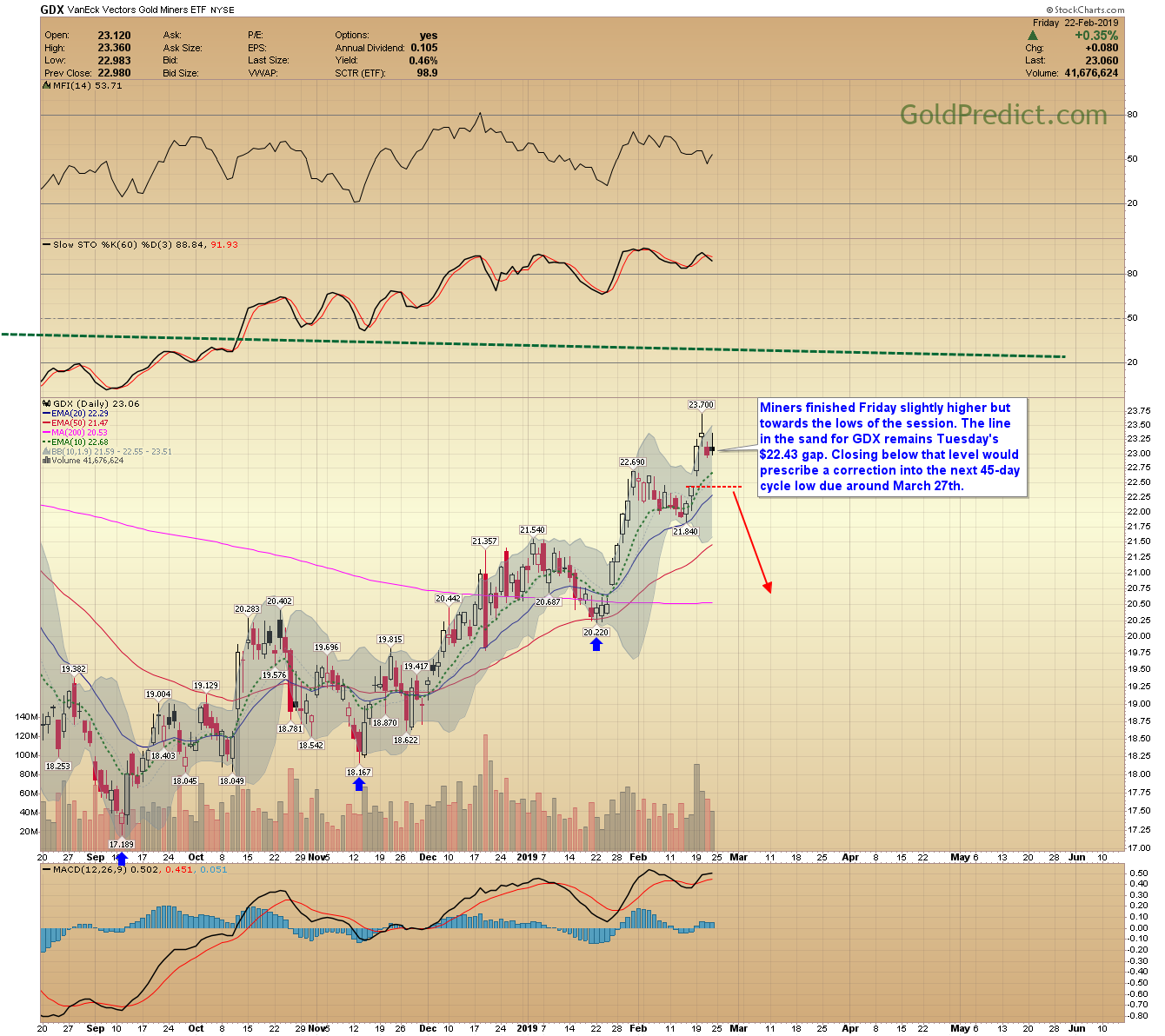 -GDXJ- Juniors bounced Friday to fill the morning gap but finish with a bearish shooting star formation. Breaking below support surrounding $33.00 would recommend a cycle peak. 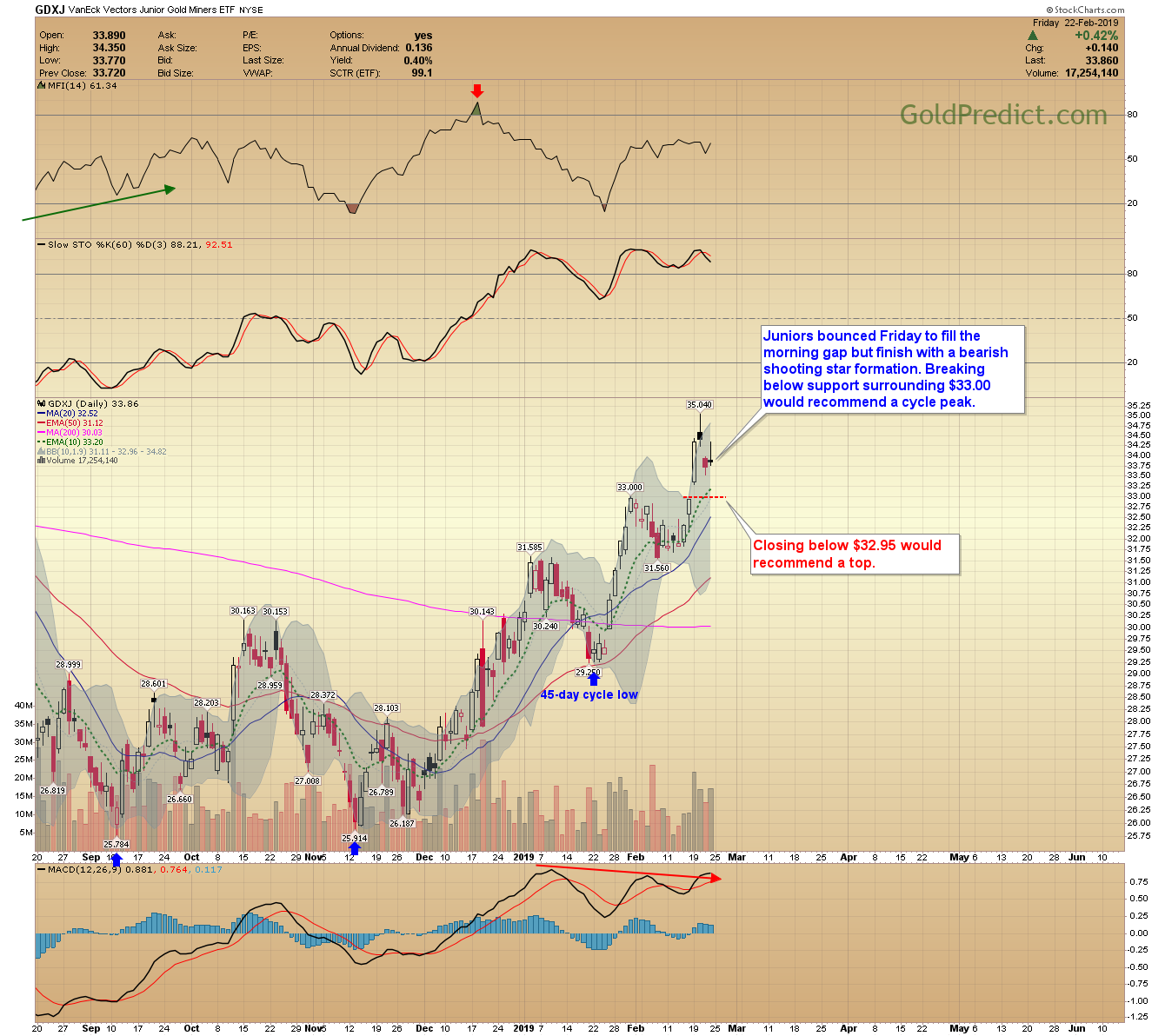 I will be sure to keep members informed again next week.

This article was published Posted on February 24, 2019 in Categories Free Updates, Weekend Newsletters