The cleanest cycle I can find is the XAU junior mining index. Prices have formed turning points every 45-trading days since September. It arrives again May 31st and should time the next low.

-XAU- The 45-day cycle in the XAU has been quite accurate timing the last four turning points. The next one is scheduled to arrive May 31st. 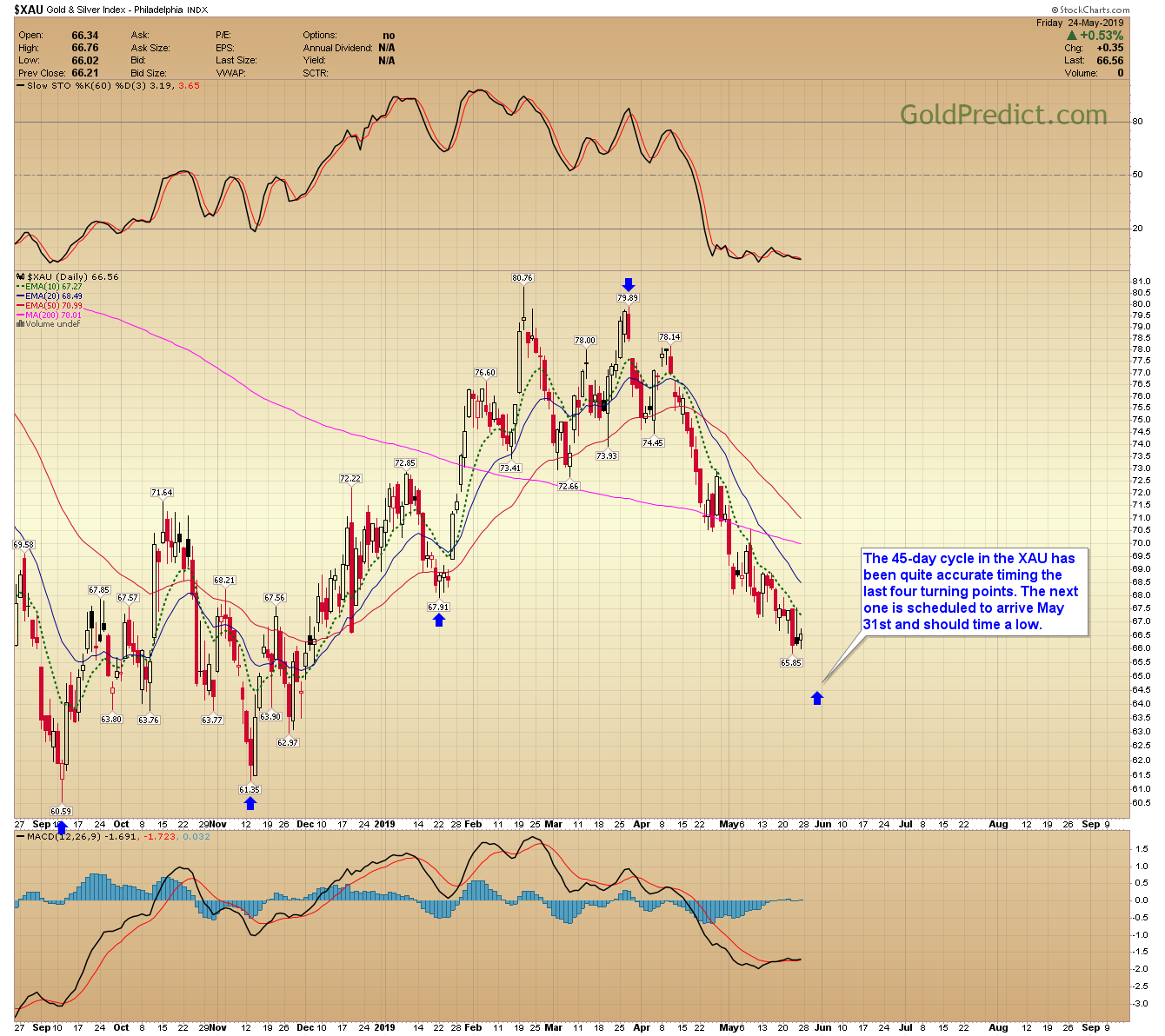 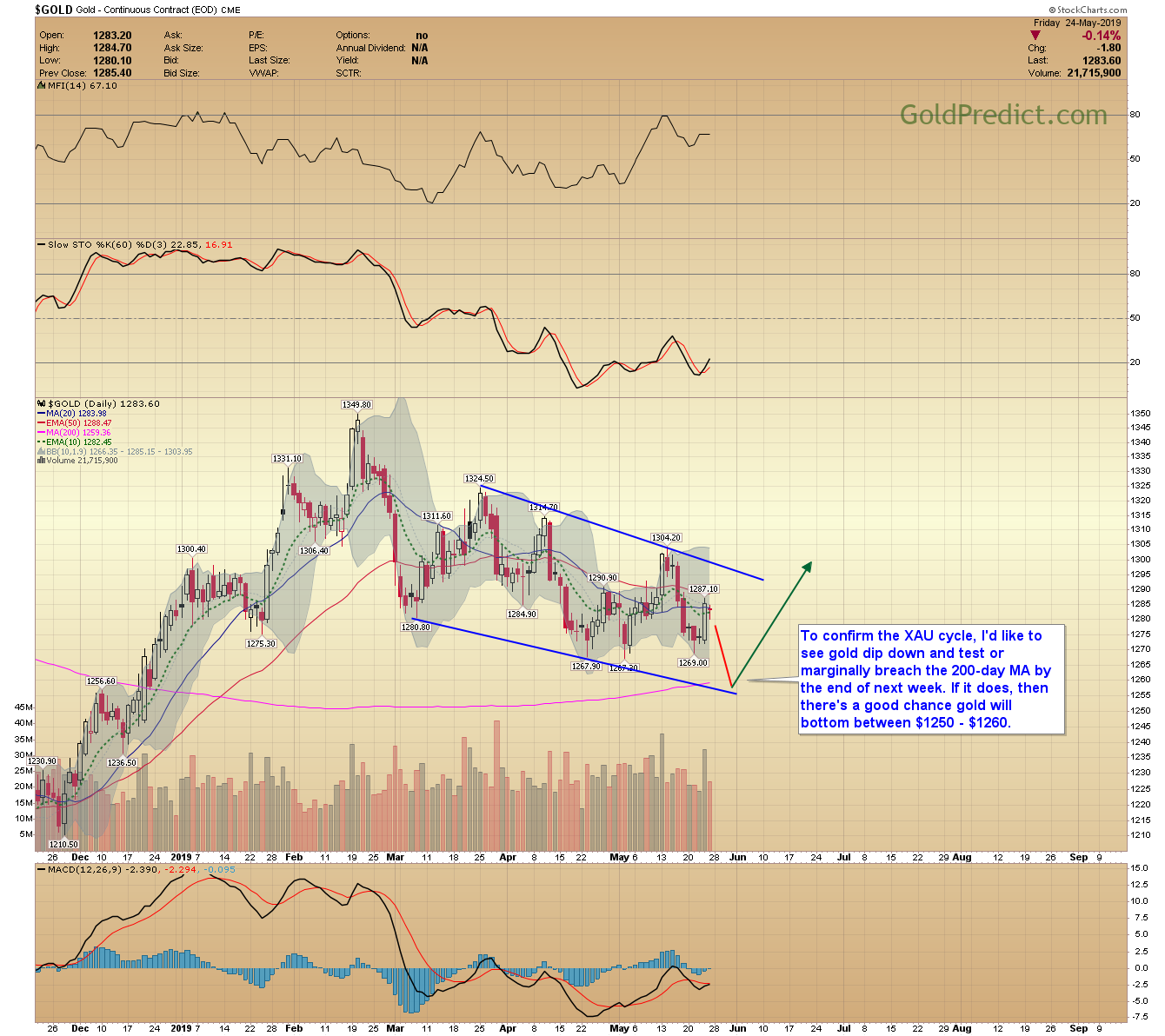 -SILVER- Prices have been grinding lower in a tight little trend channel — no signs of a bottom. Support starts around the $14.20 level. 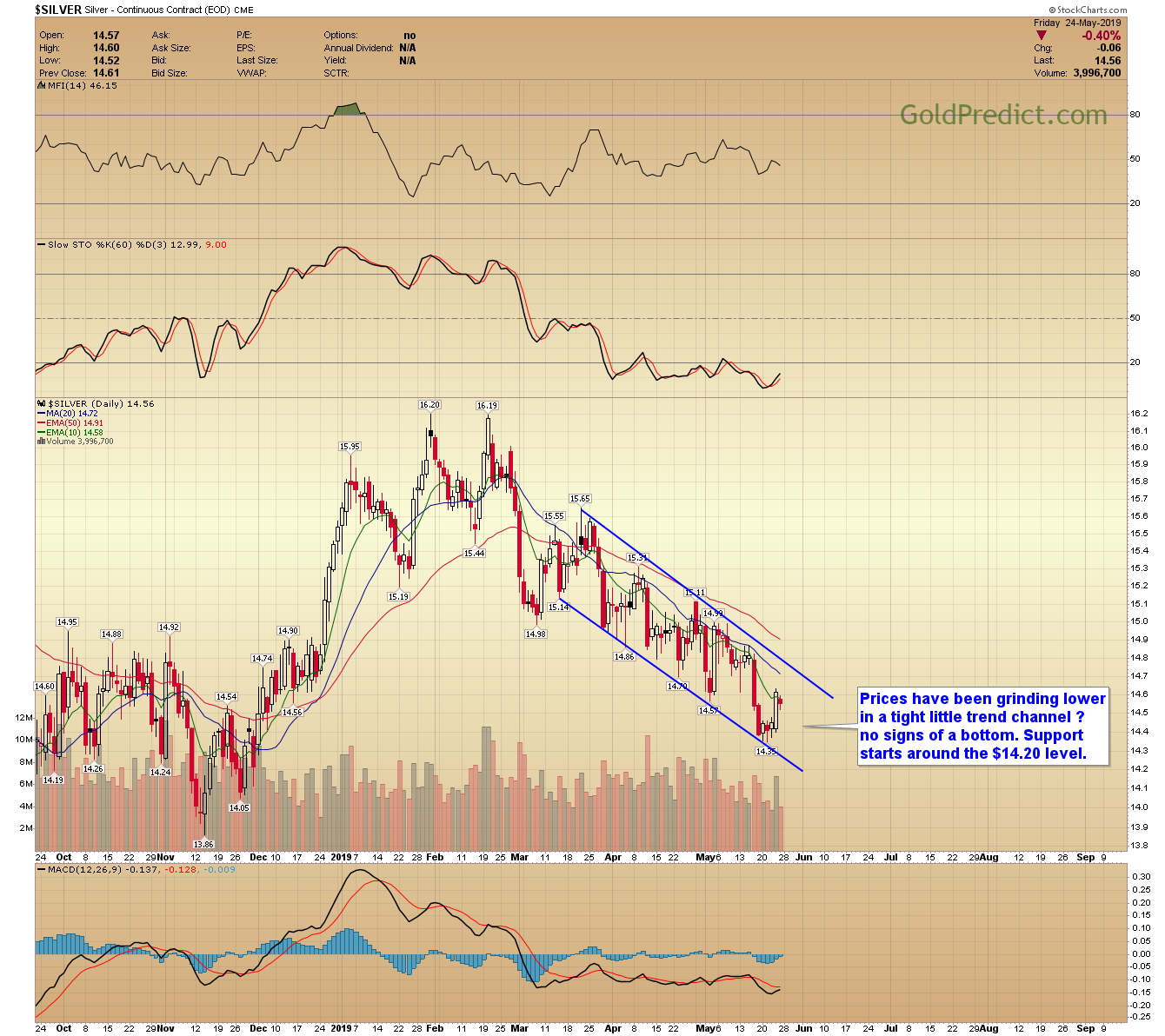 -PLATINUM- Prices reached the lower trendline. There is significant support between $750 – $800 and I suspect we will see a bottom in the coming days/weeks. 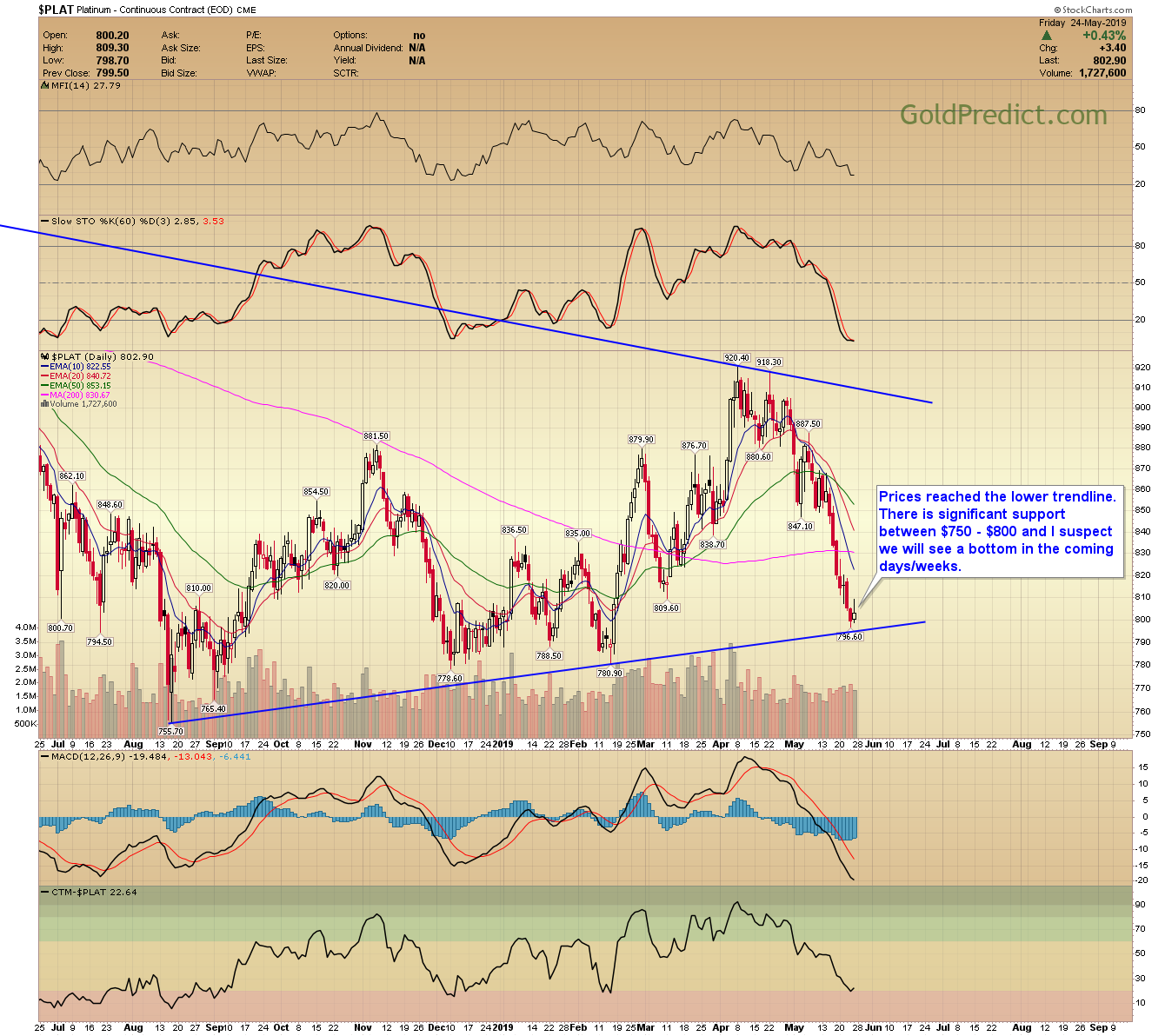 -GDX- According to the 45-day cycle, we should get a turning point next week. I assume it will be a low, but I can’t be sure (prices have traded sideways for 3-weeks). I’ll look for a bottom on Thursday or Friday if prices slip below $20.00. 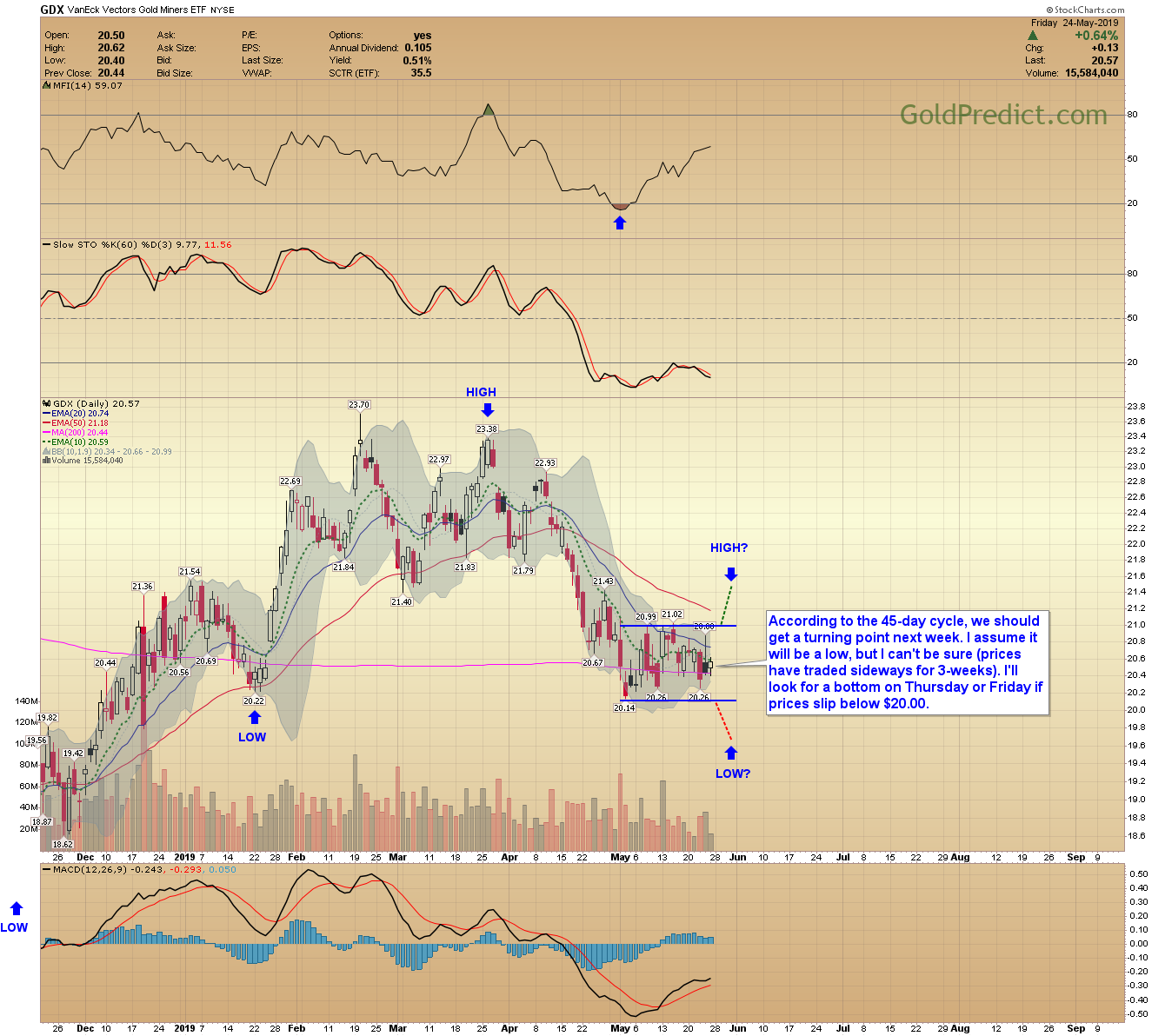 -GDXJ- I’m on the hunt for a potential bottom towards the end of next week. 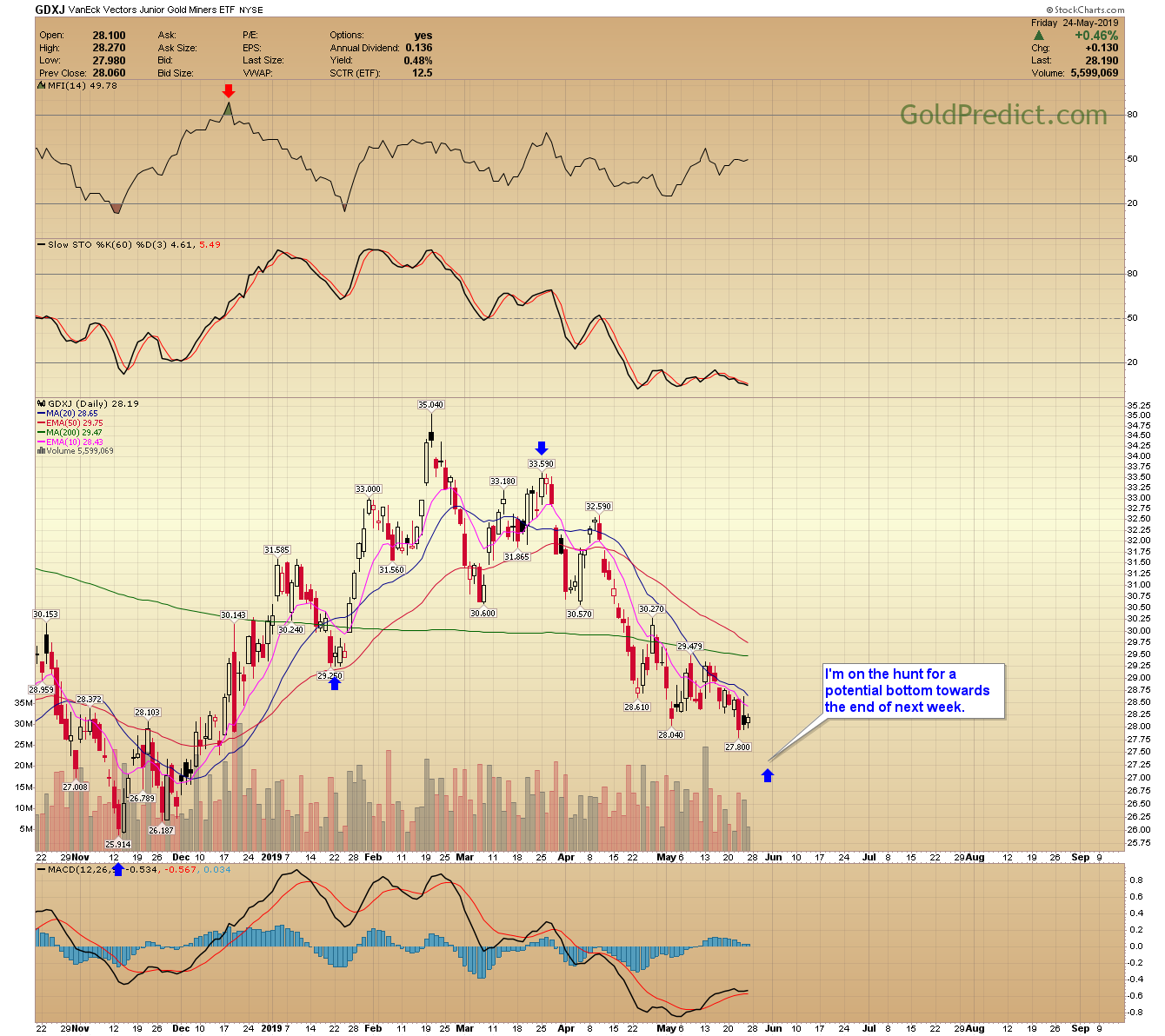 -SPY- I can make a case for a megaphone topping pattern in the stock market. The odds for a recession are increasing. PROBABILITY OF A RECESSION INDICATOR- Below is the Fed’s recession indicator predicted by the treasury spread. It has reached its highest level since 2007. The odds are beginning to favor a recession in 2020. The stock market often tops 6 to 9 months before a recession. 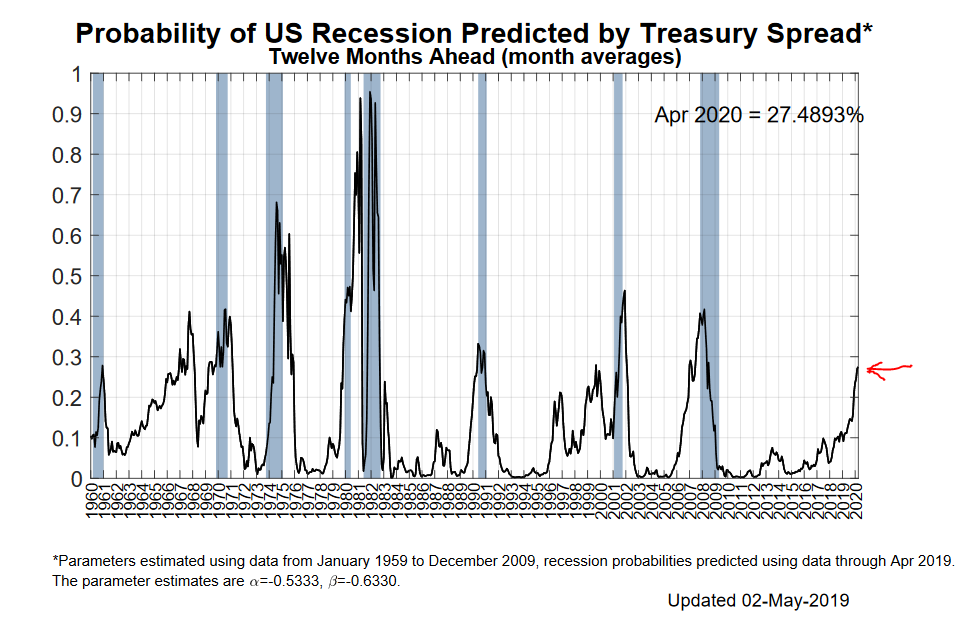 -WTIC- I suspect oil will find support between $54.00 and $57.00. It would take a sustained decline below $50.00 to recommend something more ominous and a potential bear market in stocks and oil. 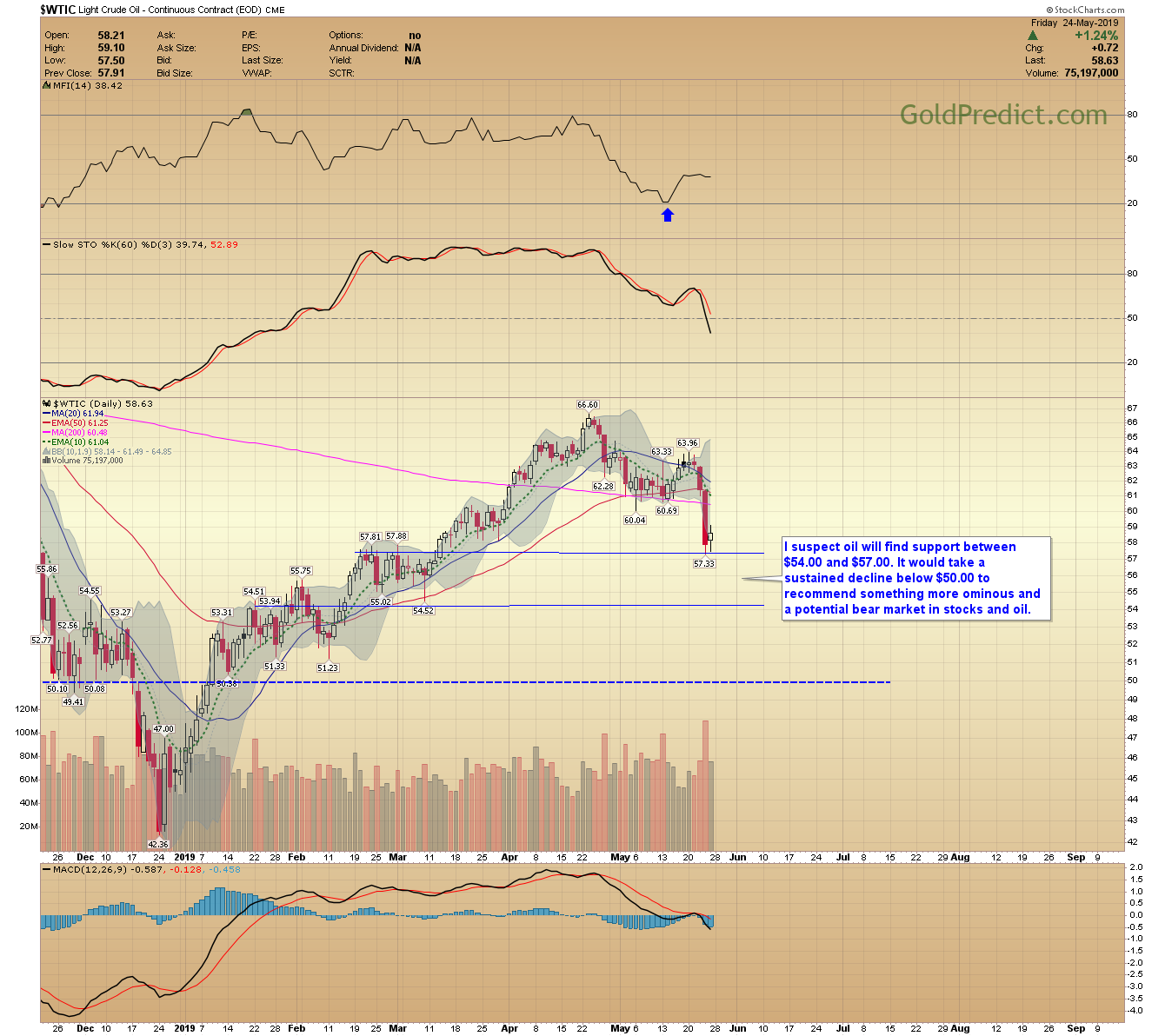 BITCOIN- It looks like prices are consolidating around the $8000 level. We could see prices break higher and test $10,000.

Some consider me a bitcoin bear – that’s not the case. I believe cryptocurrency will continue to grow and likely be the future of money. However, I think bitcoin got way ahead of itself in 2017. The parabolic run to $20,000 was near verticle and had all the hallmarks of a bubble. Historically speaking, it usually takes years for that type of speculative market sentiment to unwind…not just 12-months.

Typically for a major bottom to develop, investor sentiment reaches hopelessness and despair – we are nowhere near that in bitcoin. For that reason alone, I’m not interested in bitcoin as a long-term investment. Besides, for $8000, I’d much rather by 10 ounces of platinum knowing it is undervalued.

Think about it. Platinum on average, usually costs more than gold. Currently, it is $480 cheaper. I’d say the odds are near 100% that at some point platinum will return to parity with gold, at minimum. So in theory, buying platinum today is like buying gold at $800.

US markets are closed Monday for Memorial Day.

Hope everyone is having a safe and pleasant weekend.

This article was published Posted on May 26, 2019 in Categories Free Updates, Updates