Gold is testing its major breakout level, and it’s fate likely depends on the result of the June 19th Fed announcement. What they decide will determine if gold breaks immediately higher or if prices will top and slip back to support between $1200 – $1220 this fall.

-US DOLLAR WEEKLY- Weekly dollar prices formed a swing high and closed below the 20-week EMA. The recent price correction has helped gold. The next significant support level arrives around 96.00, where moving averages and a trendline converge. For gold to breakout above $1370, the dollar would likely have to break decisively below 96.00 and then 95.00. 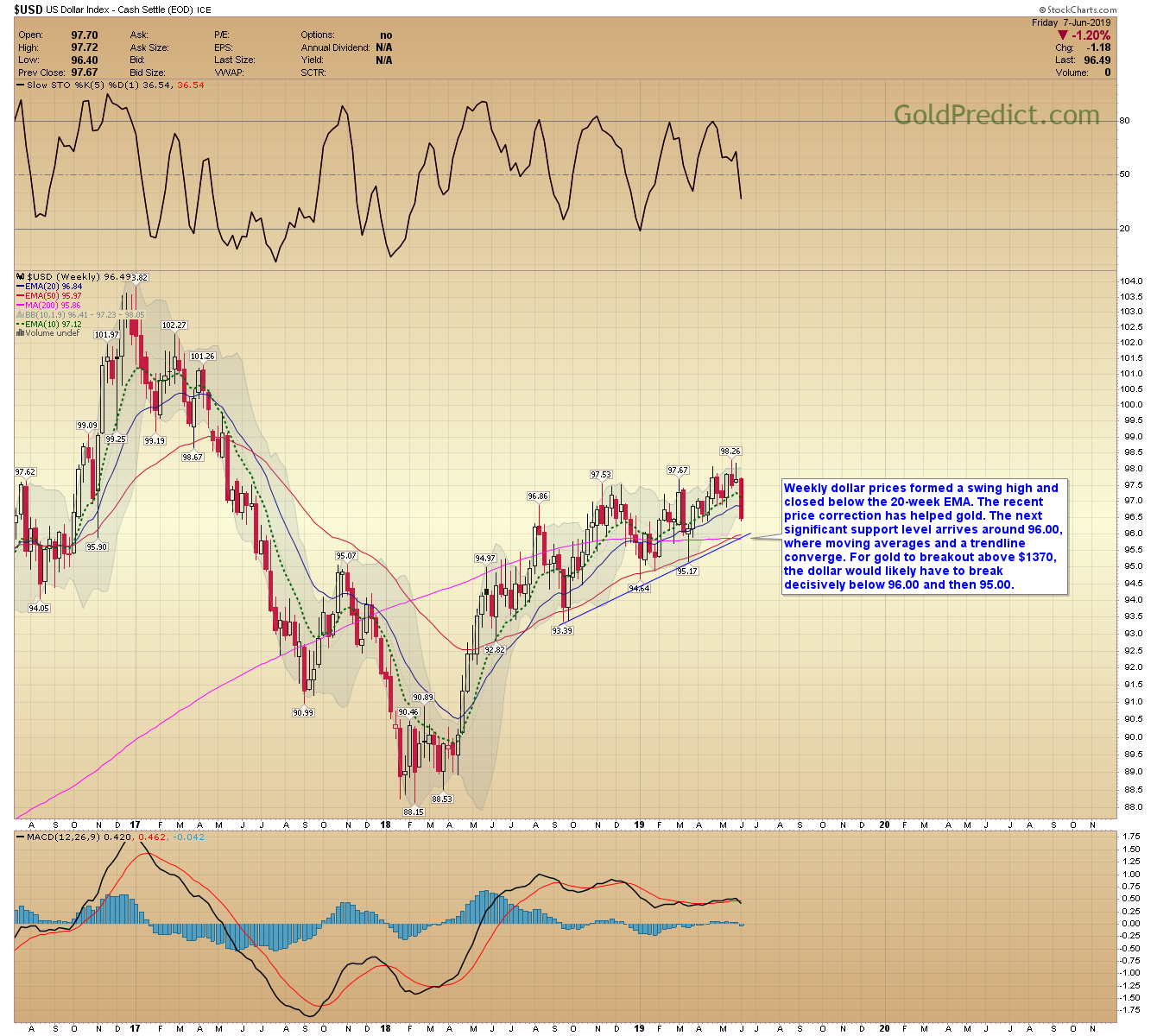 -GOLD WEEKLY- Prices made a fresh weekly closing high for 2019. We are in the danger zone for another top. The June 19th Fed announcement will likely determine if gold tops or if prices will finally breakout. Another failure would imply a trip back down to $1200 – $1220 by Q4. 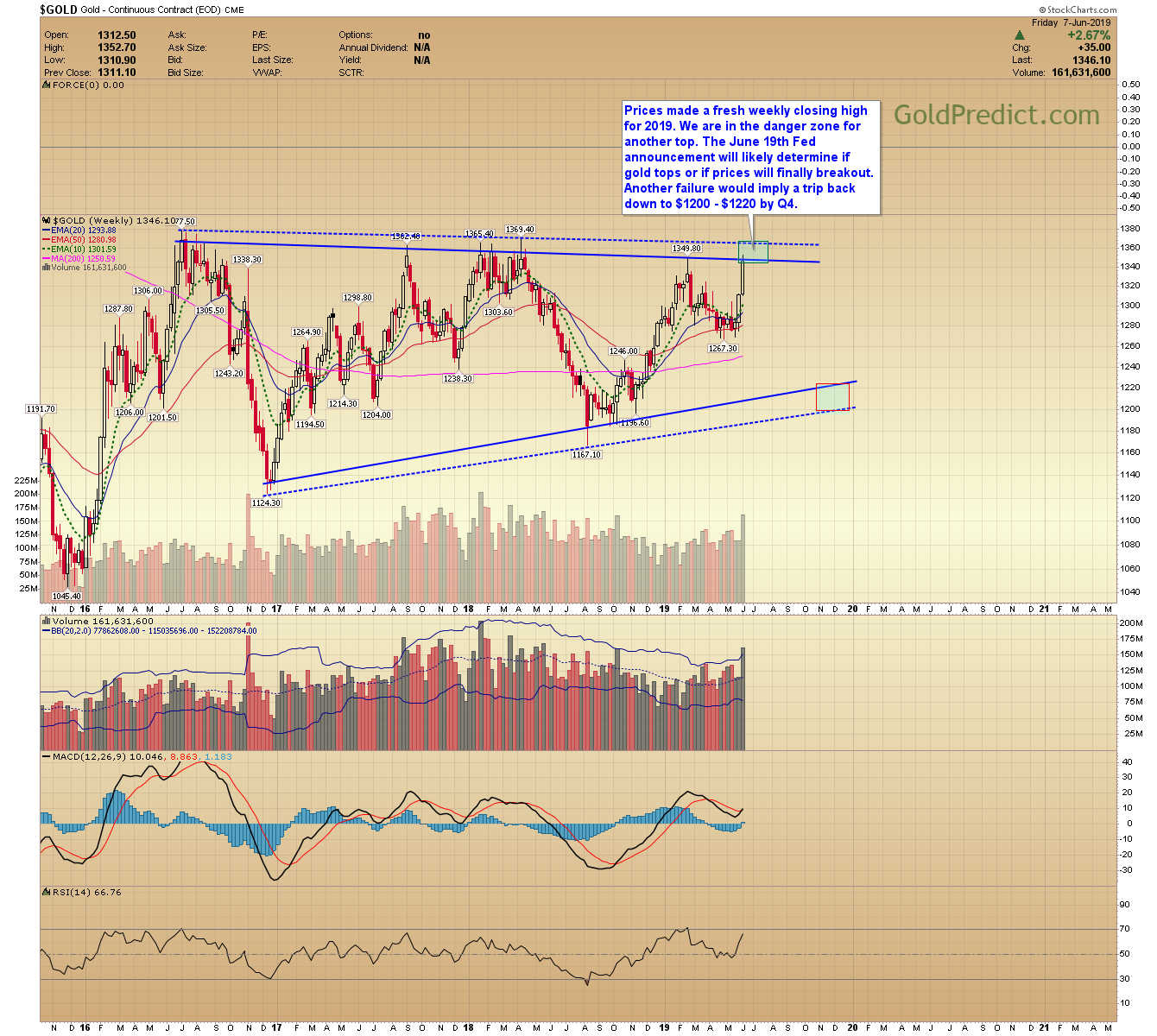 10-YEAR TREASURY YIELDS: One metric supporting a top in gold, is the weekly RSI of 10-year treasury yields. These extreme oversold conditions have corresponded with a top in gold. 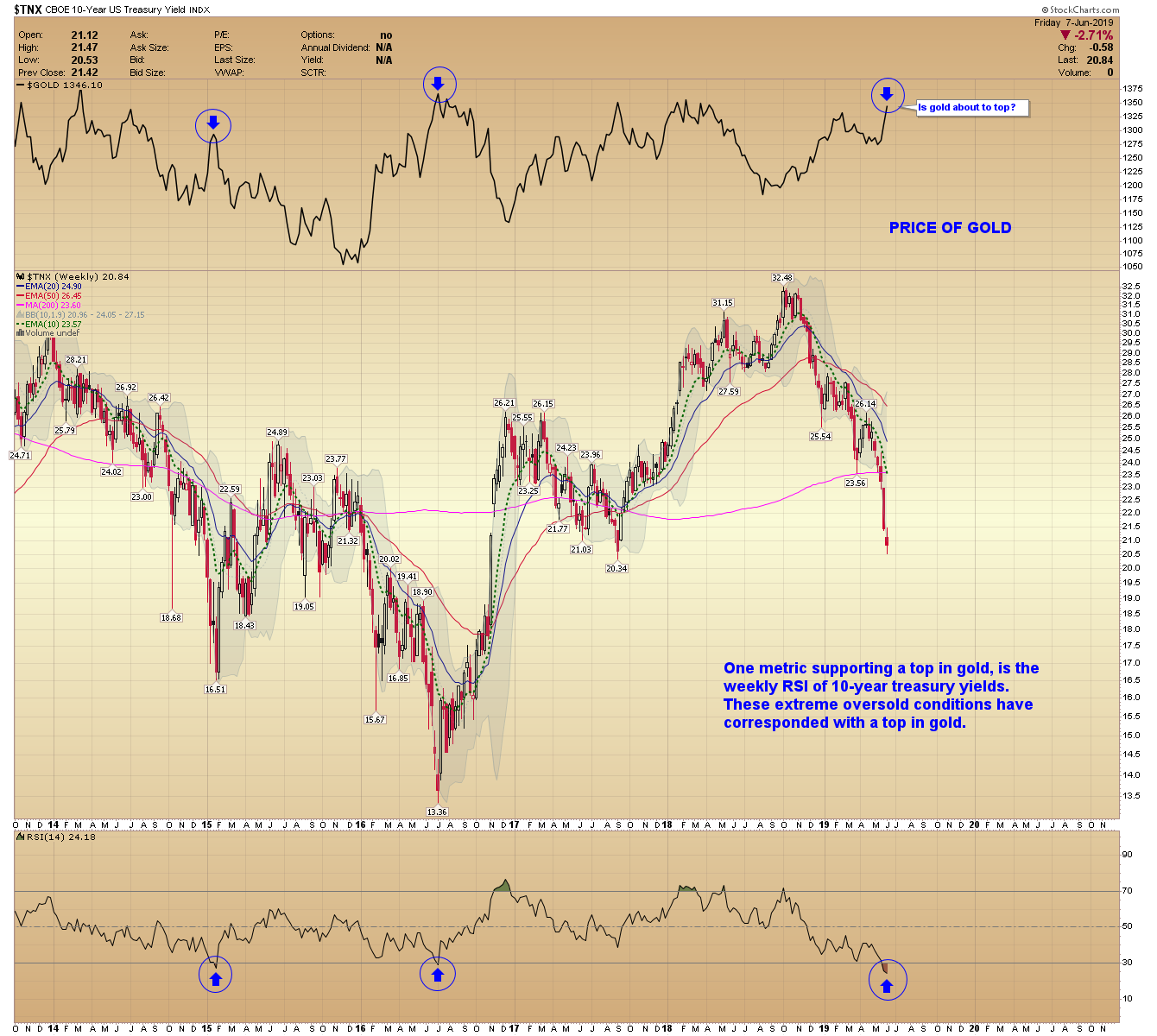 -SILVER DAILY- Prices finished the week above $15.00 as well as the 200-day MA. I’m a little concerned that silver remains near the bottom of its range as gold is testing its major breakout level. If gold fails and turns lower, it could be bad news for silver. However, if gold breaks out, then we could see silver leap higher is it attempts to catch up. 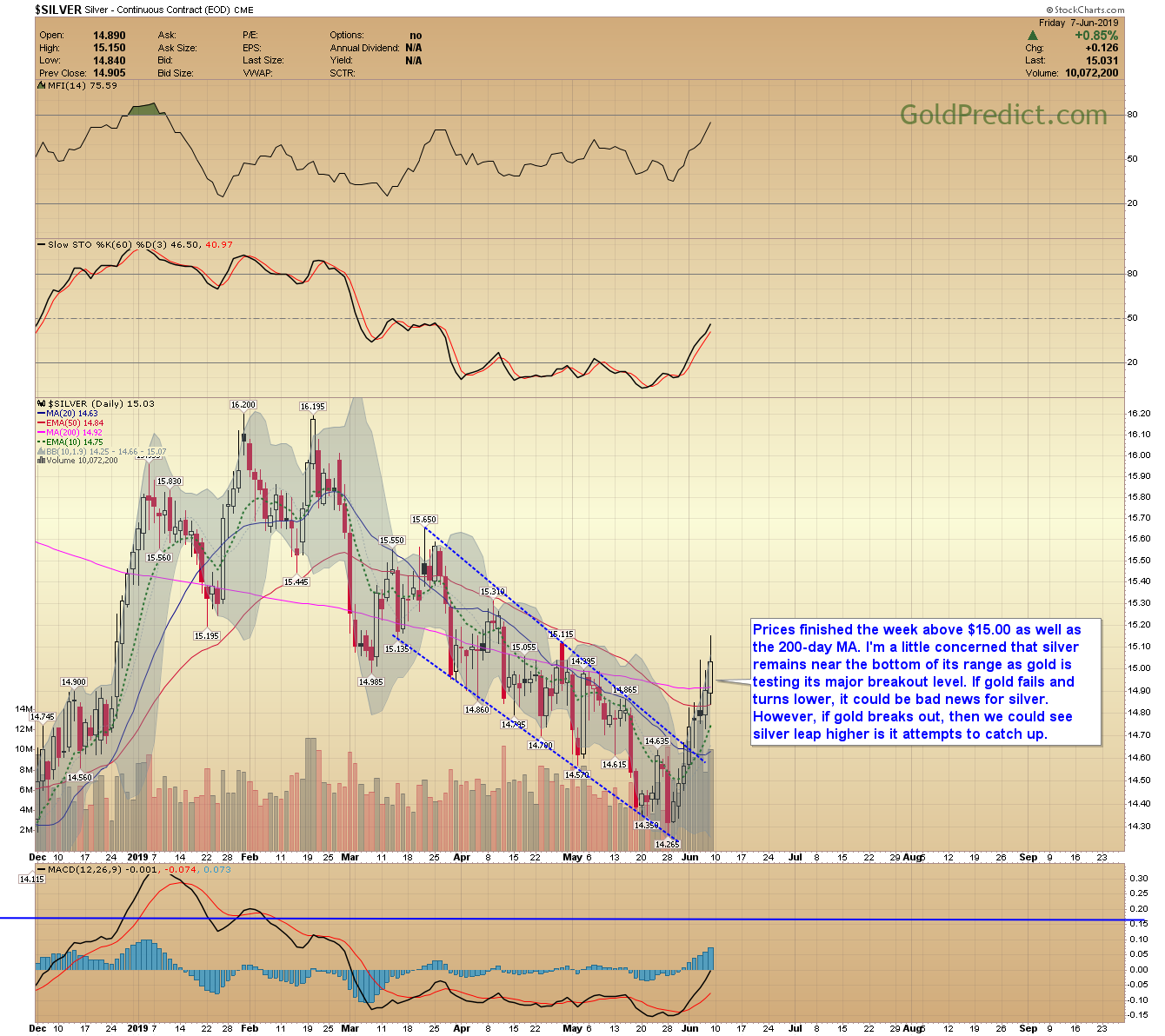 -GDX- Above is the price of gold. Each blue arrow represents a peak in gold and the corresponding top in miners. As you can see, miners are making progressively lower highs. If gold is finally going to breakout above $1370, then GDX should explode, on huge volume, above the downtrend line dating back to 2017. I will be watching this area closely over the next few weeks for vital clues. 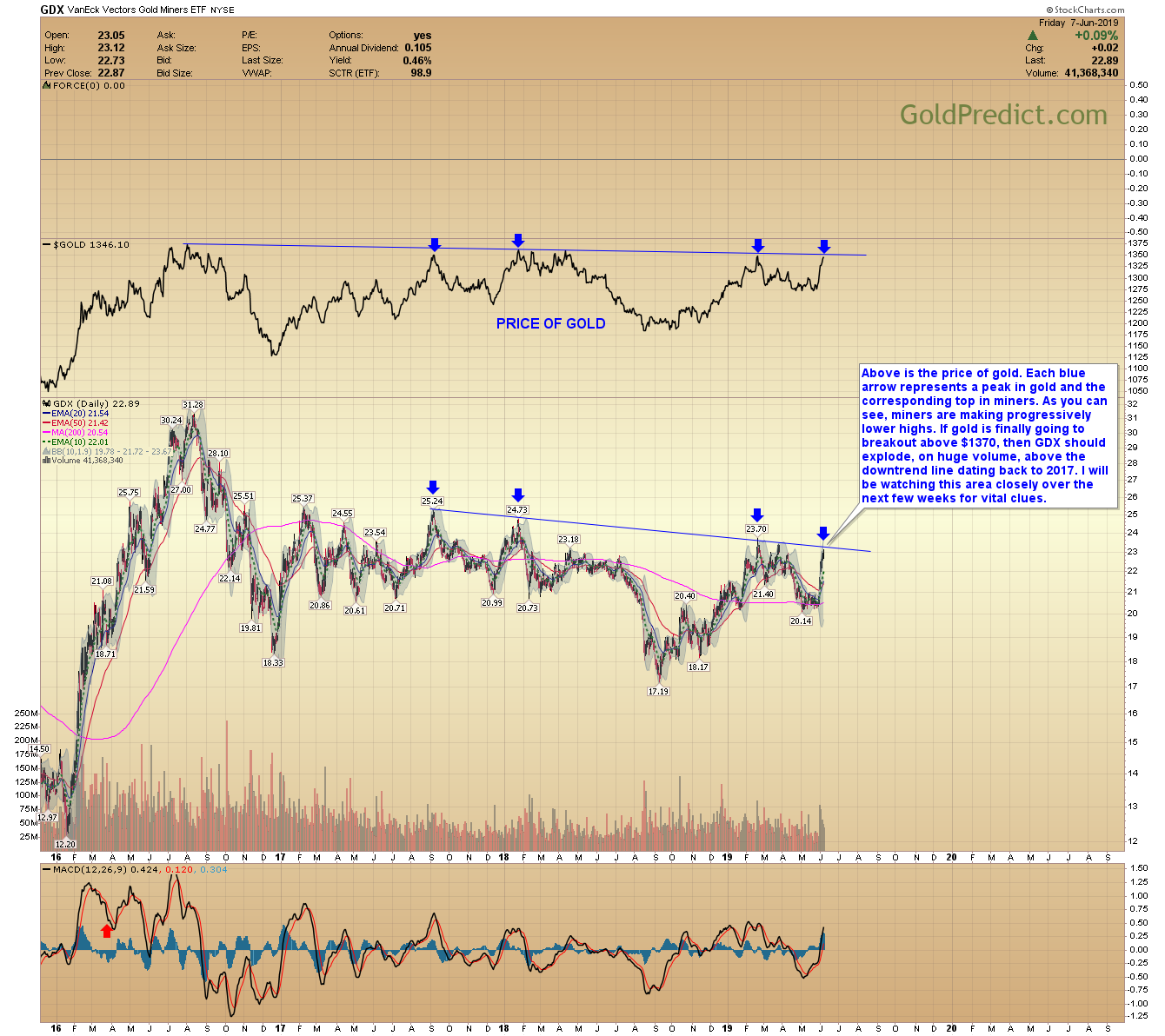 -GDXJ- Junior miners are performing significantly worse than GDX and are about 10% below the breakout trendline. This is likely due to the under performance of silver. 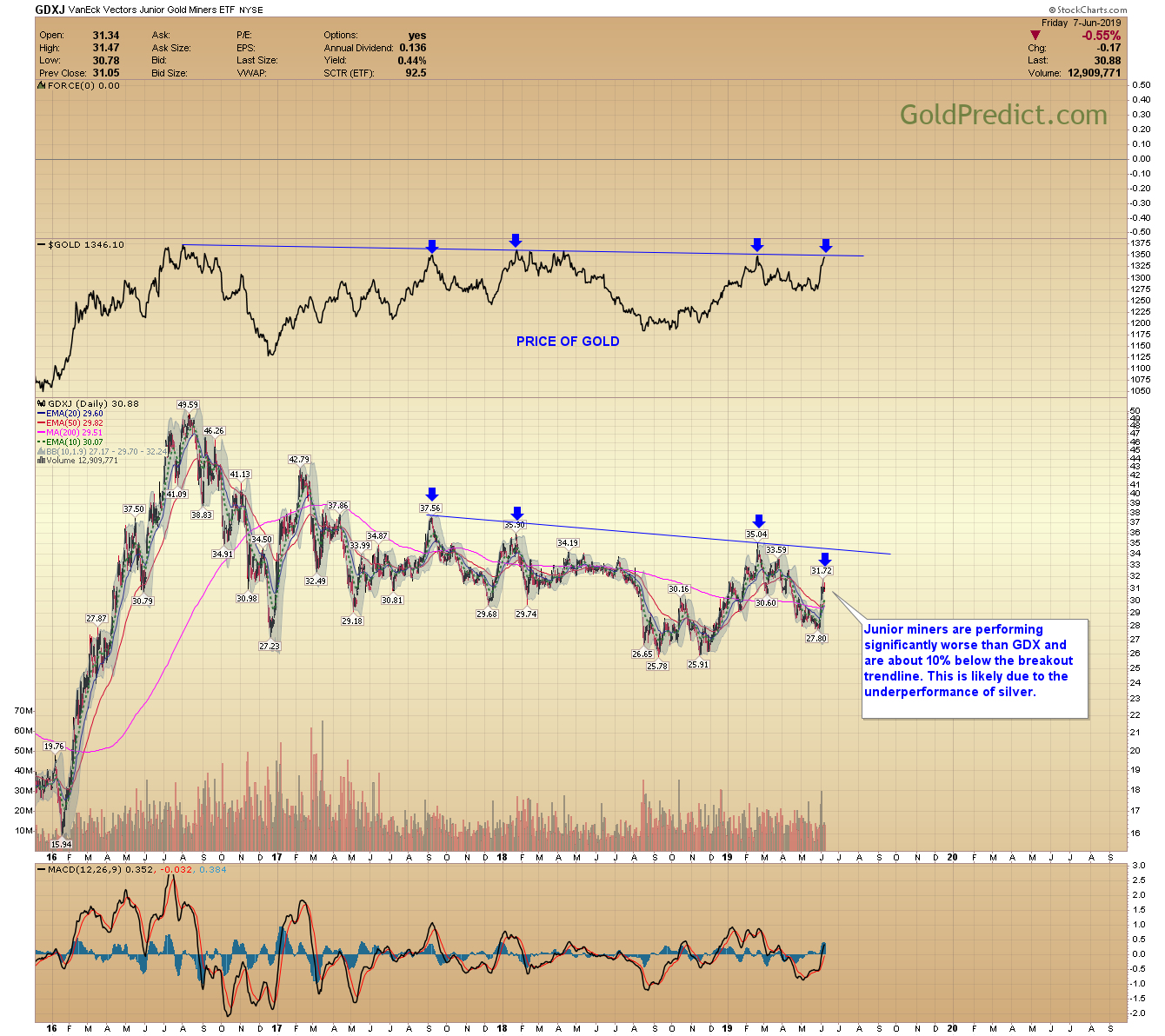 -SPY- Stocks liked the dovish tone from the Fed and prices rallied Friday. If the advance persists, I will look for resistance around the 300 level as prices test the upper boundary of the potential broadening wedge formation. 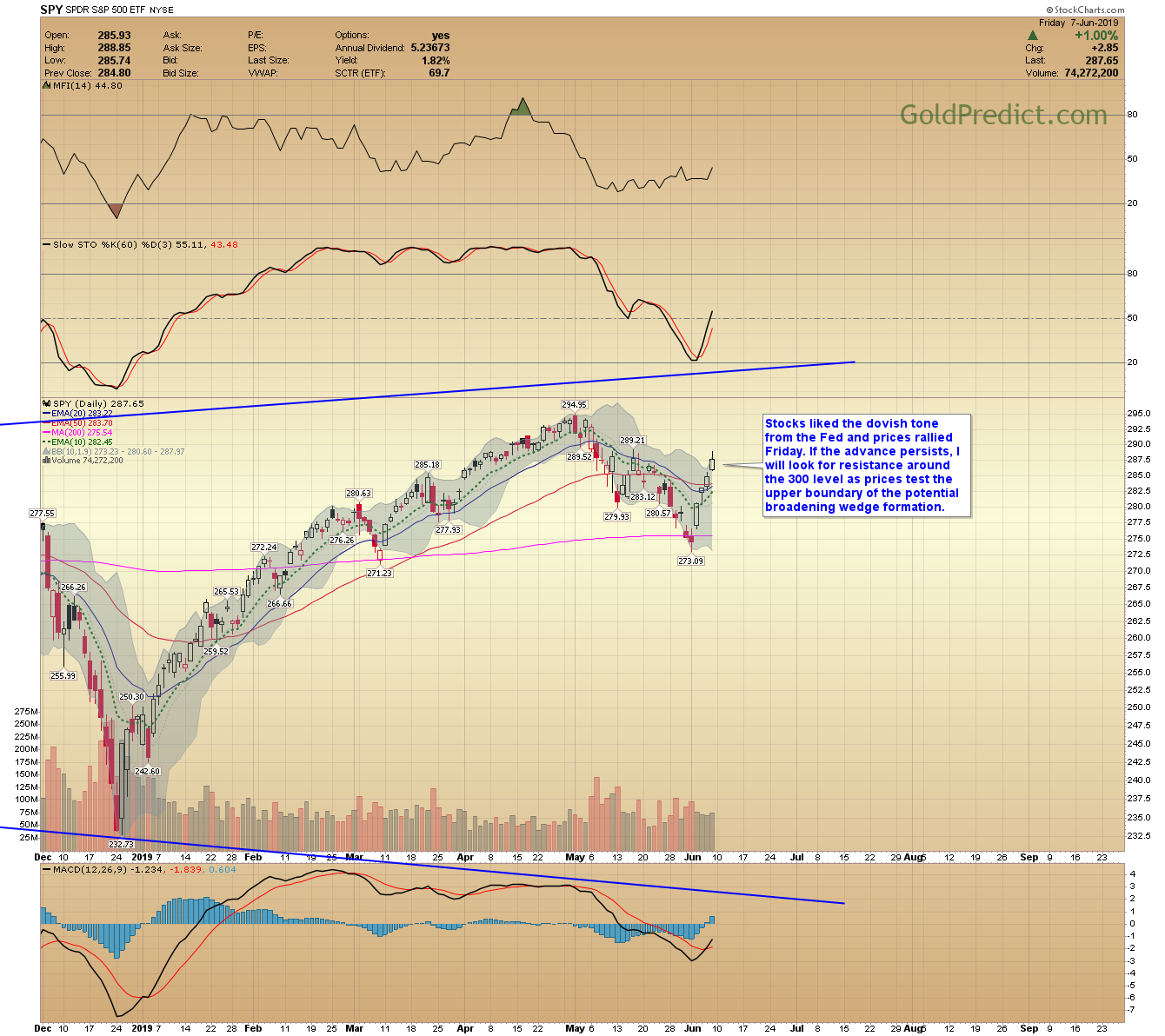 -WTIC- Oil formed a swing low, and I see the potential for a bottom at $50.60. Closing progressively above the 10-day EMA will confirm. I will look for bullish setups in energy stocks. 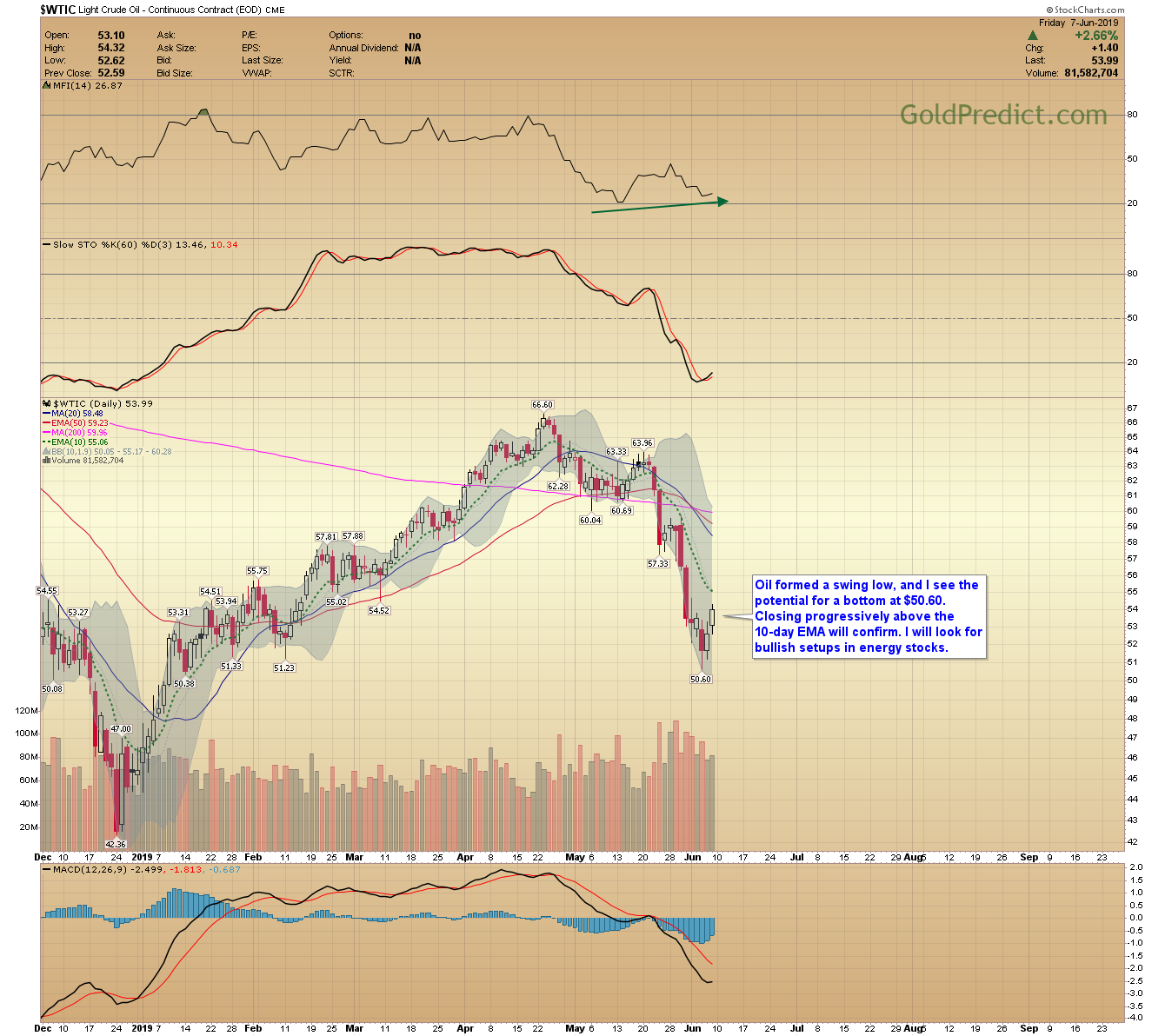 This article was published Posted on June 25, 2019 in Categories Free Updates, Weekend Newsletters