The consolidation in gold appears to be taking the form of a triangle pattern. Closing above $1425 would recommend an upside breakout. Downside support arrives between $1385 and $1390.

Silver exceeded its June high and prices are showing subtle signs of life. For the last 8-years, silver has peaked in the first half of the year and then retreated. A rally that extends into August and September would signal a change in character and likely new bull market. Failing to take out the 2019 high ($16.20) in the coming weeks would recommend a bearish second-half for silver.

-GOLD- As I noted in this mornings gold update, the consolidation appears to be taking on the form of a triangle. For an upside breakout, I’d like to see a definitive close above $1425. Support at the lower end stands between $1385 and $1390. It would take a close below $1380 to register a breakdown. 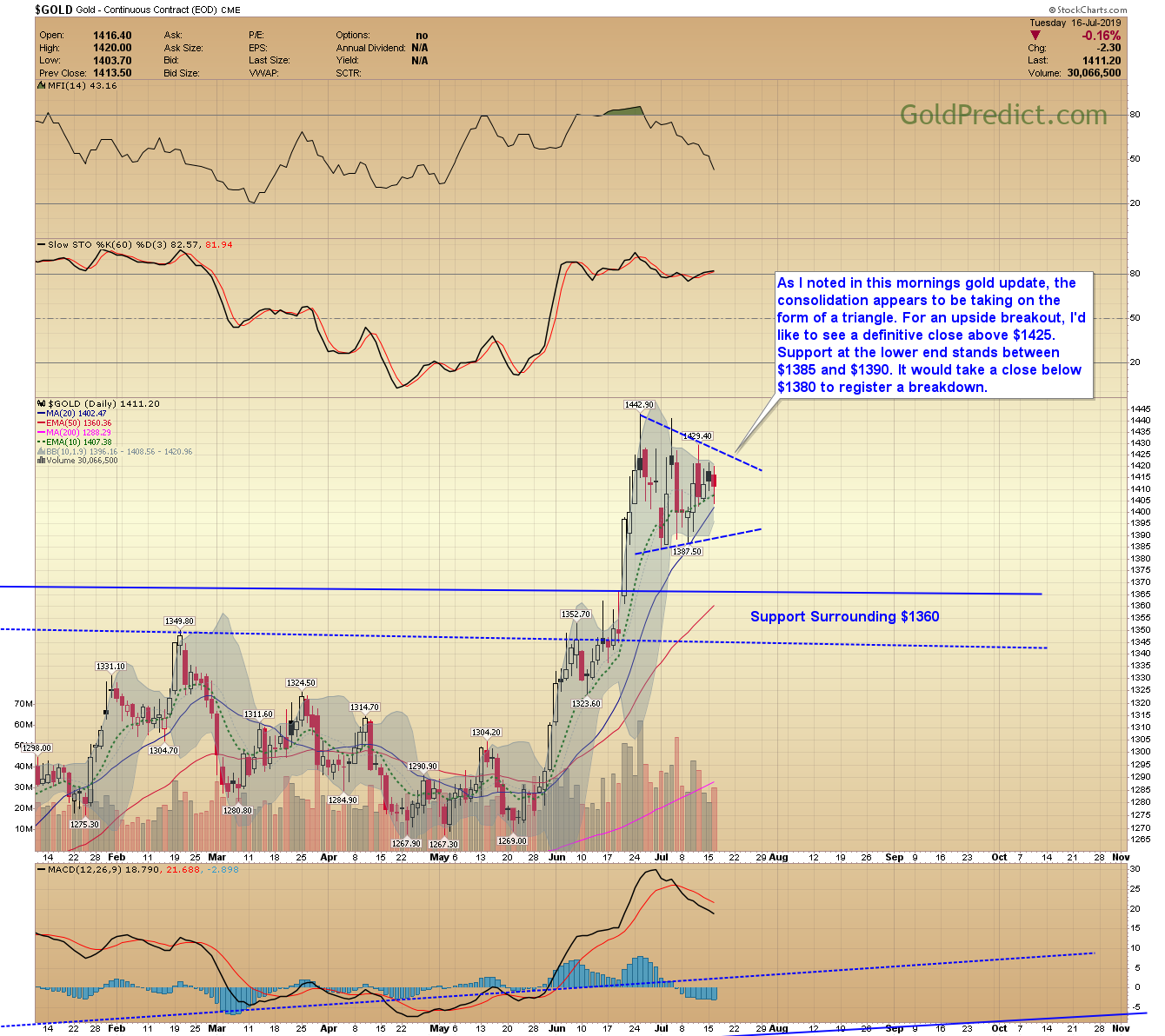 -SILVER- Prices exceeded the June high after successfully holding support around $15.00. If the rally extends the next resistance area arrives between $16.00 – $16.20. 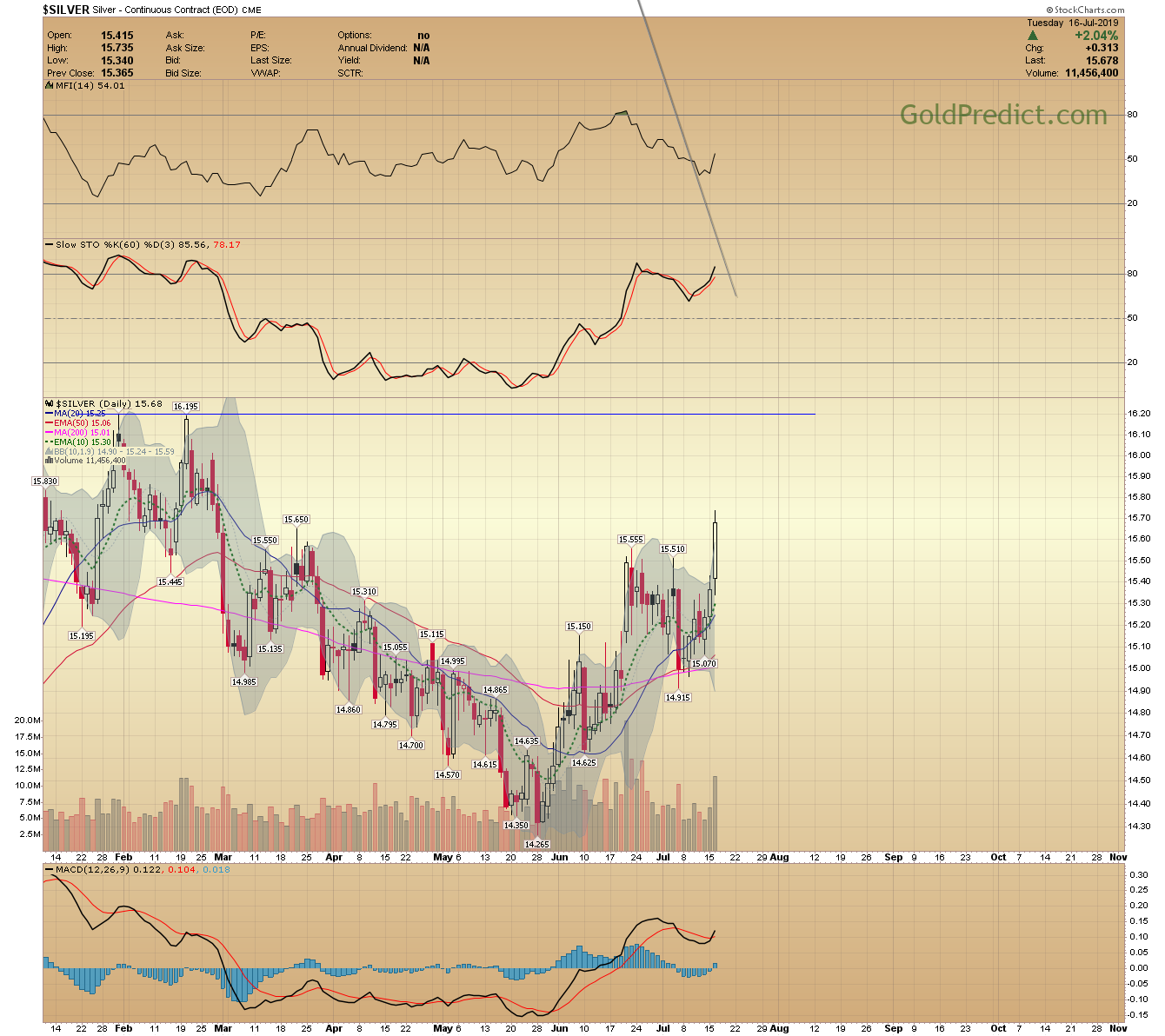 -SILVER’S ANNUAL HIGHS- Silver hasn’t made consistent annual highs after July since prices went parabolic in 2010. For the last 8-years silver has peaked in the first part of the year and weakened after that. In 2016 prices rallied to July 5th before topping. Continued strength into August and September that exceeds the $16.20 would be a positive development. And a rally above the 2018 high ($17.70) would establish a new bull market, in my opinion. Failing to take out the $16.20 would support another second-half slump.

-PLATINUM- Prices eked out a new closing high, and that completes a series of higher highs and higher lows, i.e., a trend change. Support arrives between $825 and $835 if prices pullback. 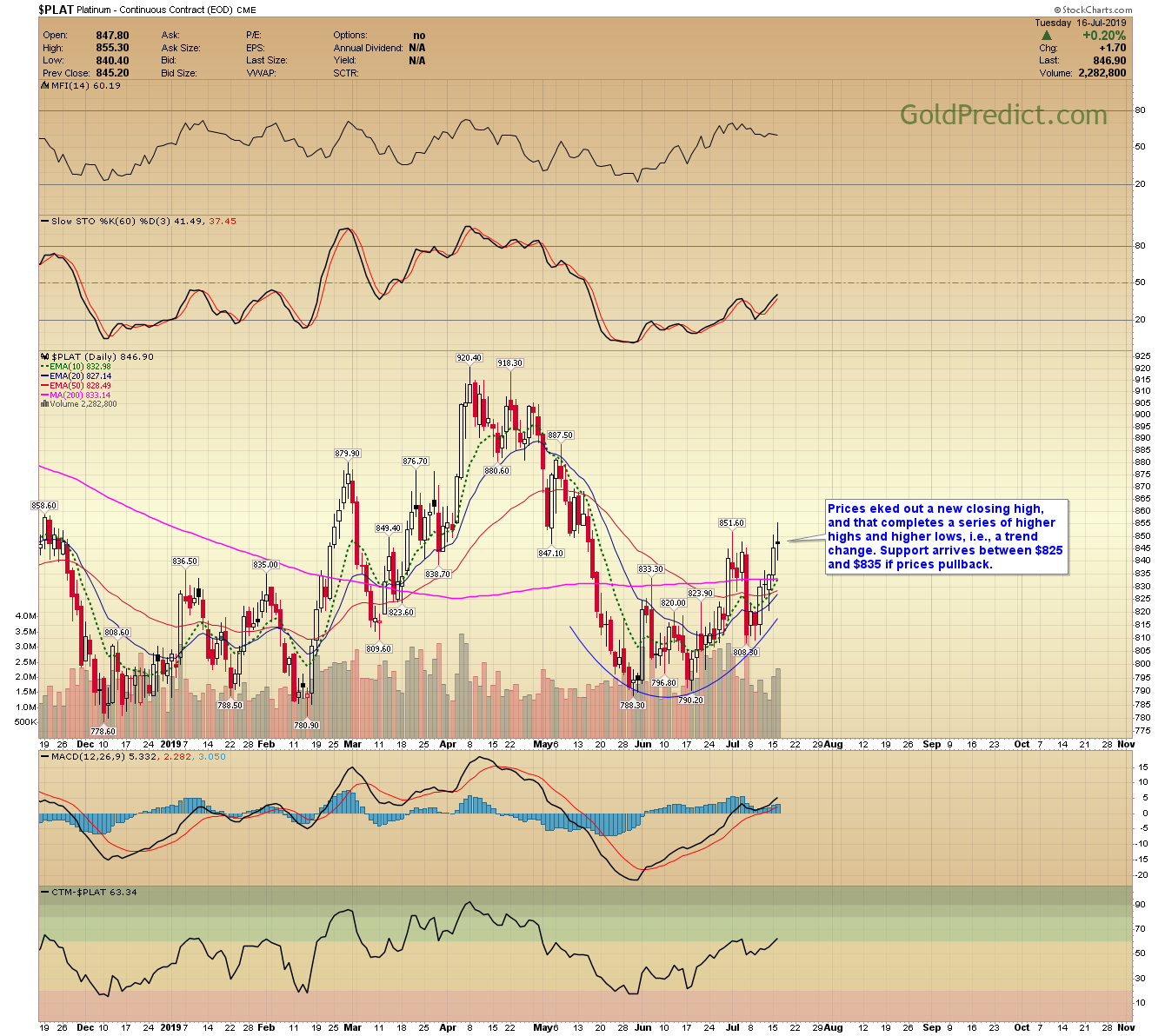 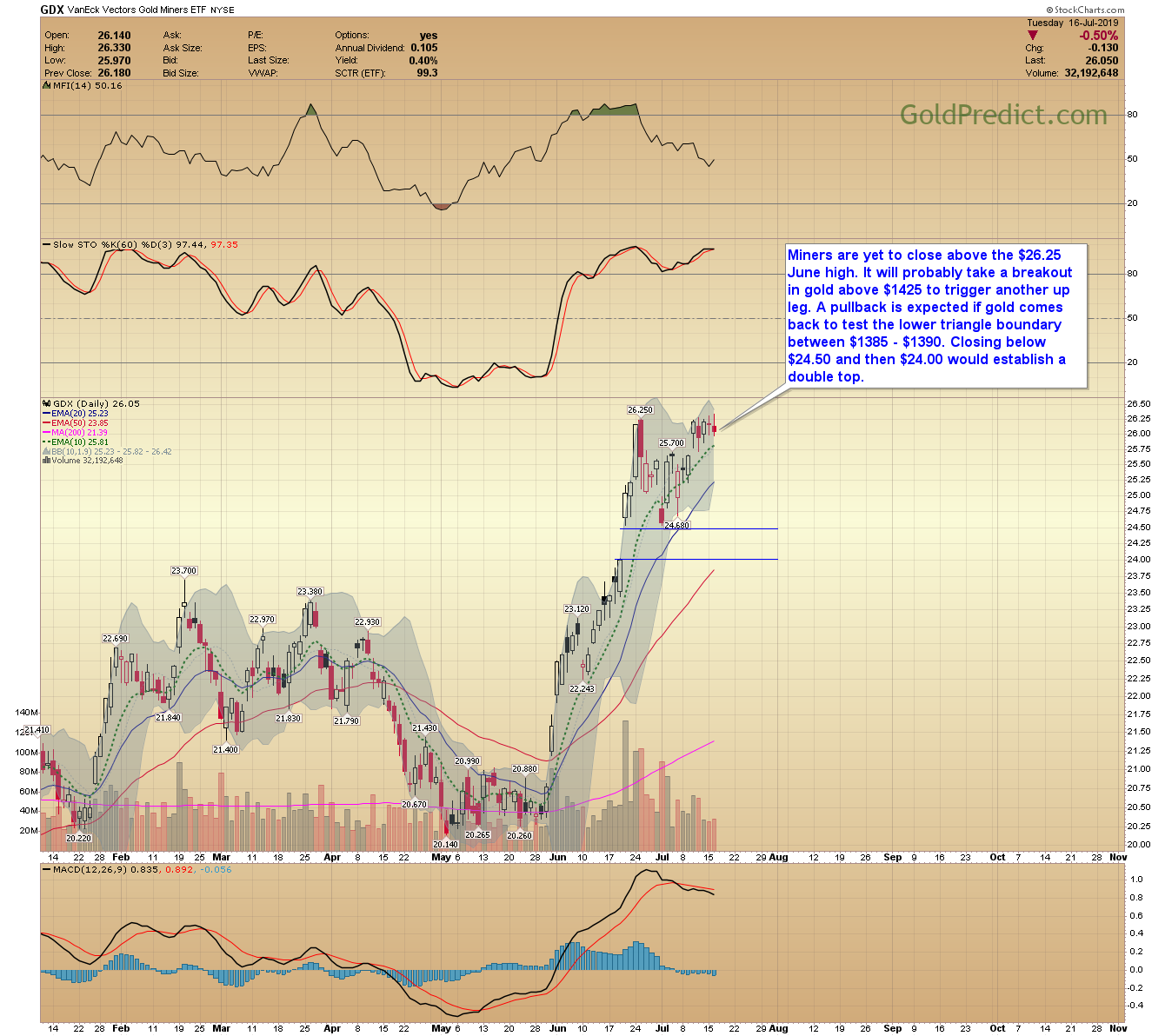 -GDXJ- Juniors closed above $36.00 but not convincingly. Nevertheless, if silver continues to rally into August and September, I suspect juniors will begin to outperform GDX significantly. To support this scenario, silver would have first take out its $16.20 high.

-SPY- Prices remain in the danger zone where a more significant top could form. It would take a sustained post-Fed rally above 305 to support a breakout and more upside. 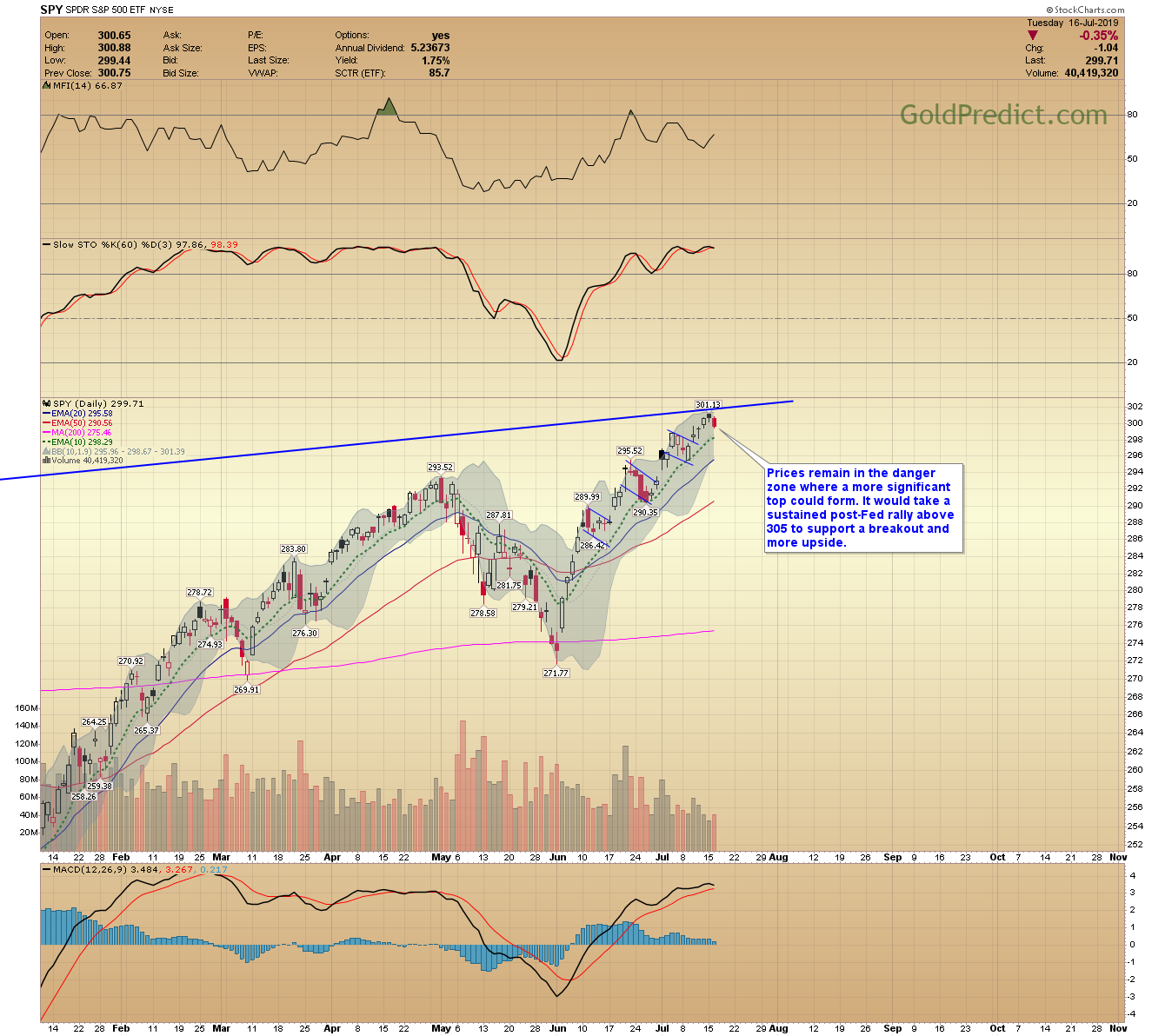 -WTIC- We have a series of higher highs and higher lows off the June bottom. Prices challenged but failed to close above resistance at $61.00. Oil would have to close below $56.00 to invalidate the newly established uptrend.

This article was published Posted on July 16, 2019 in Categories Free Updates, Reports