Ray Dalio released an excellent article last week concerning longer-term investment themes and paradigm shifts. He breaks down each decade, starting with the 1920s and the various economic factors that shaped capital flows. In a nutshell, each decade has its own investment theme. For example, from 2010 until now, the stock market has been the place to be. He believes the next decade (2020 -2030) will favor gold as governments will likely resort to debt monetization and currency devaluation to keep the system afloat. It’s a long read but enlightening. Click here to check it out.

I agree with him 100%, and I think the rally in gold is just getting started. So how should an investor approach the next decade? I prefer a long-term perspective. Have and keep a core position, preferably in physical bullion. Add to your core holdings when prices pullback or when something is undervalued – like platinum and silver are today. When the time is right, and the gold bull market is nearing its end, it will be time to look for undervalued asset classes (stocks, bonds, real estate, etc.) and the next paradigm shift.

Investors that have a high tolerance for risk and volatility can use a portion of their portfolio for trading the shorter-term cycles. But that can be difficult, even in the bull market.

If the next decade is going to be suitable for gold and other hard assets, it might not be a bad idea to allocate a little capital to speculative mining stocks. One company I’m considering is Northern Dynasty Minerals (NAK). They have vast, undeveloped copper and gold reserves in Alaska. The company has struggled with permitting, and there’s no guarantee it will ever become a mine. But the potential is there, and if everything works out, I think the stock could be a 50 or even 100-bagger.

-GOLD’S 2019 BREAKOUT- Gold broke out of the 6-year basing pattern that began in June 2013. Any retest of support surrounding $1360 should be considered a strong buy. There is significant resistance near $1550 and then again at $1800. It will take time, and there will be plenty of backing and filling as prices work their way towards the $1900 level. Depending on political events and monetary policy, I’m not expecting a breakout above $2000 until 2021 or 2022. The moral of the story is I believe gold prices are beginning a rally that should strengthen throughout the majority of the next decade. There are too many unknowable factors, but if we see a 1970’s style inflationary period, I think gold could reach $8500+. 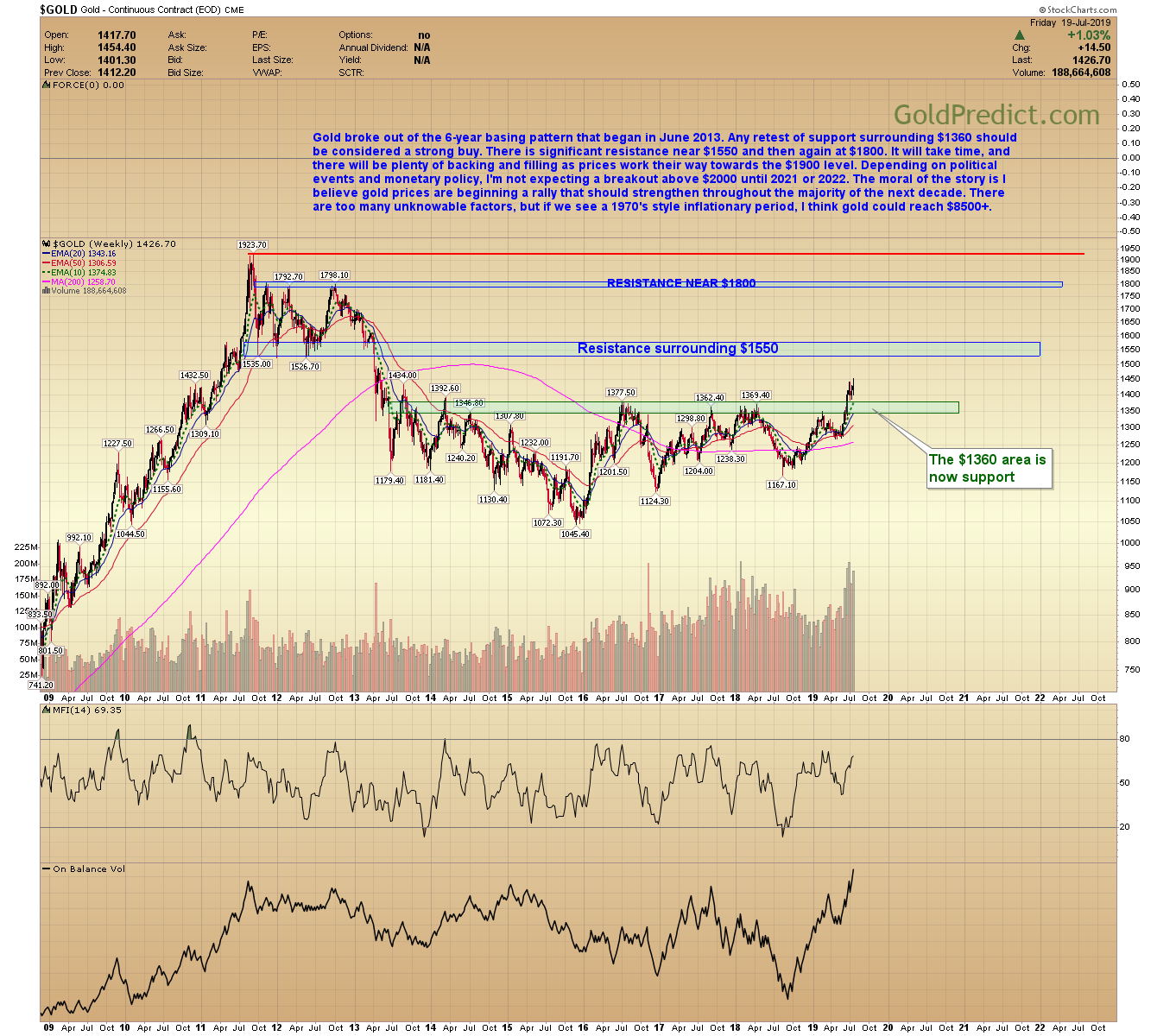 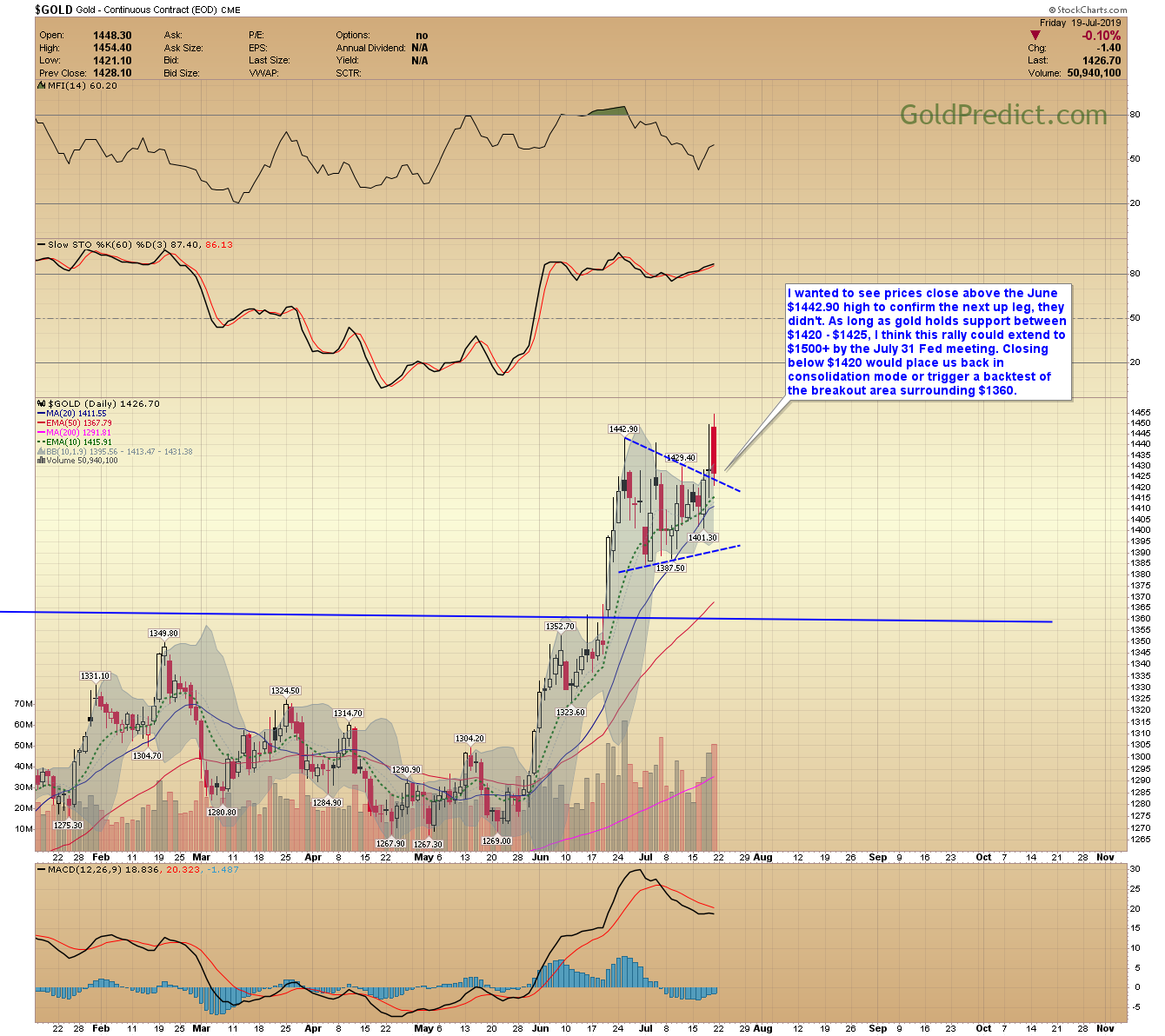 -SILVER WEEKLY- Prices made a new 2019 high, but they are smack dab in the middle of the 200-day MA envelope that has contained prices since 2016. A full-blown breakout is yet to be confirmed, but in my opinion, it’s just a matter of time. Like gold, I believe silver will rally throughout much of the next decade. Once prices breakout above $50.00, there’s no telling how high silver could go. 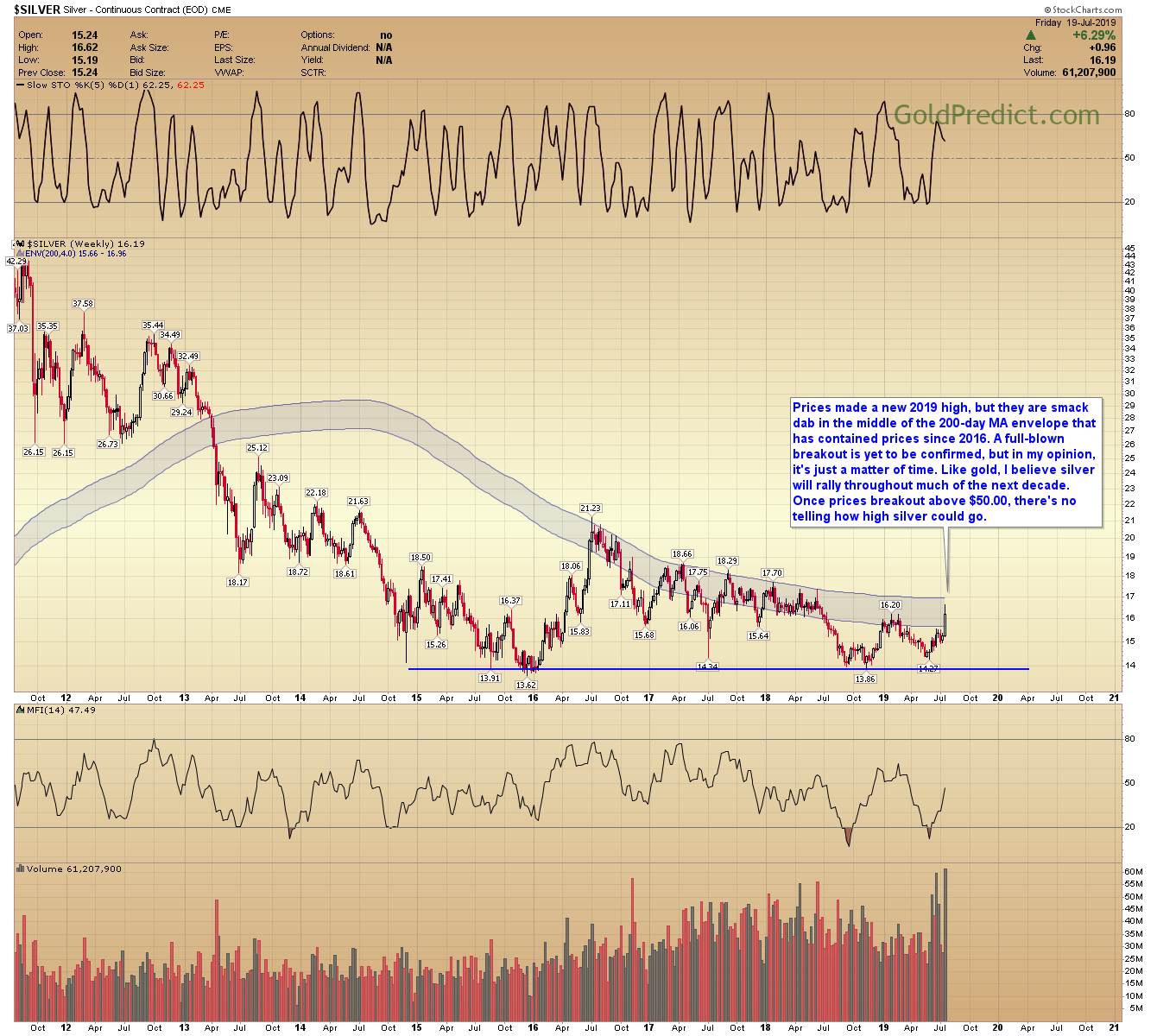 -SILVER DAILY- Prices came back to test the $16.20 level on Friday after hitting $16.62 intra-day, likely profit-taking. To extend the current momentum thrust, silver needs to hold support between $16.00 – $16.20. Closing below $16.00 would support a failed breakout.

-GDX- Miners are confirming the breakout in gold and could accelerate higher into the July 31 Fed meeting if gold maintains the $1420 – $1425 area. 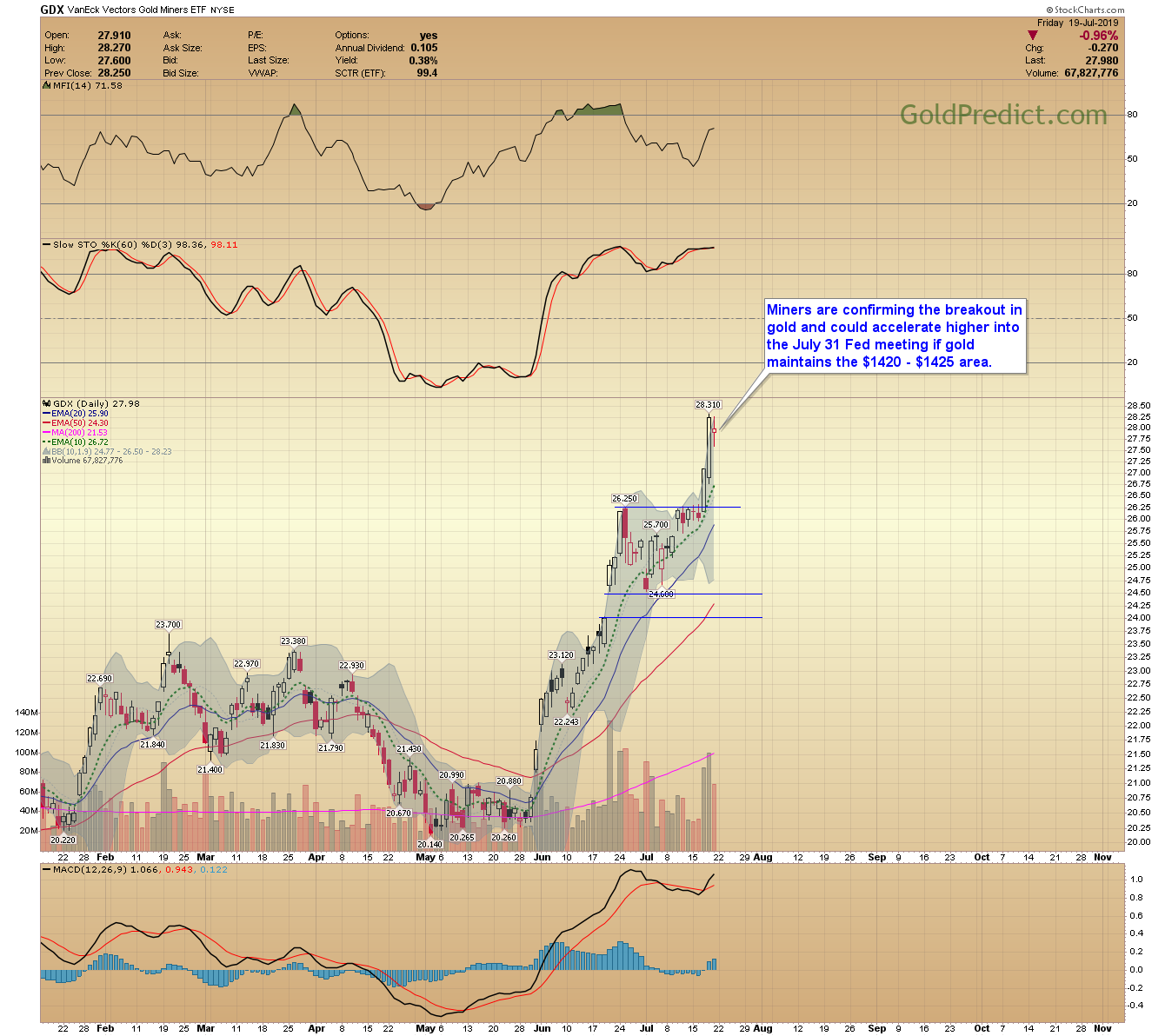 -GDXJ- A simple ABC measured move in GDXJ supports a $42.75 target if prices rally into the late July Fed announcement. More is possible if gold tests $1500+ and silver continues its momentum surge. 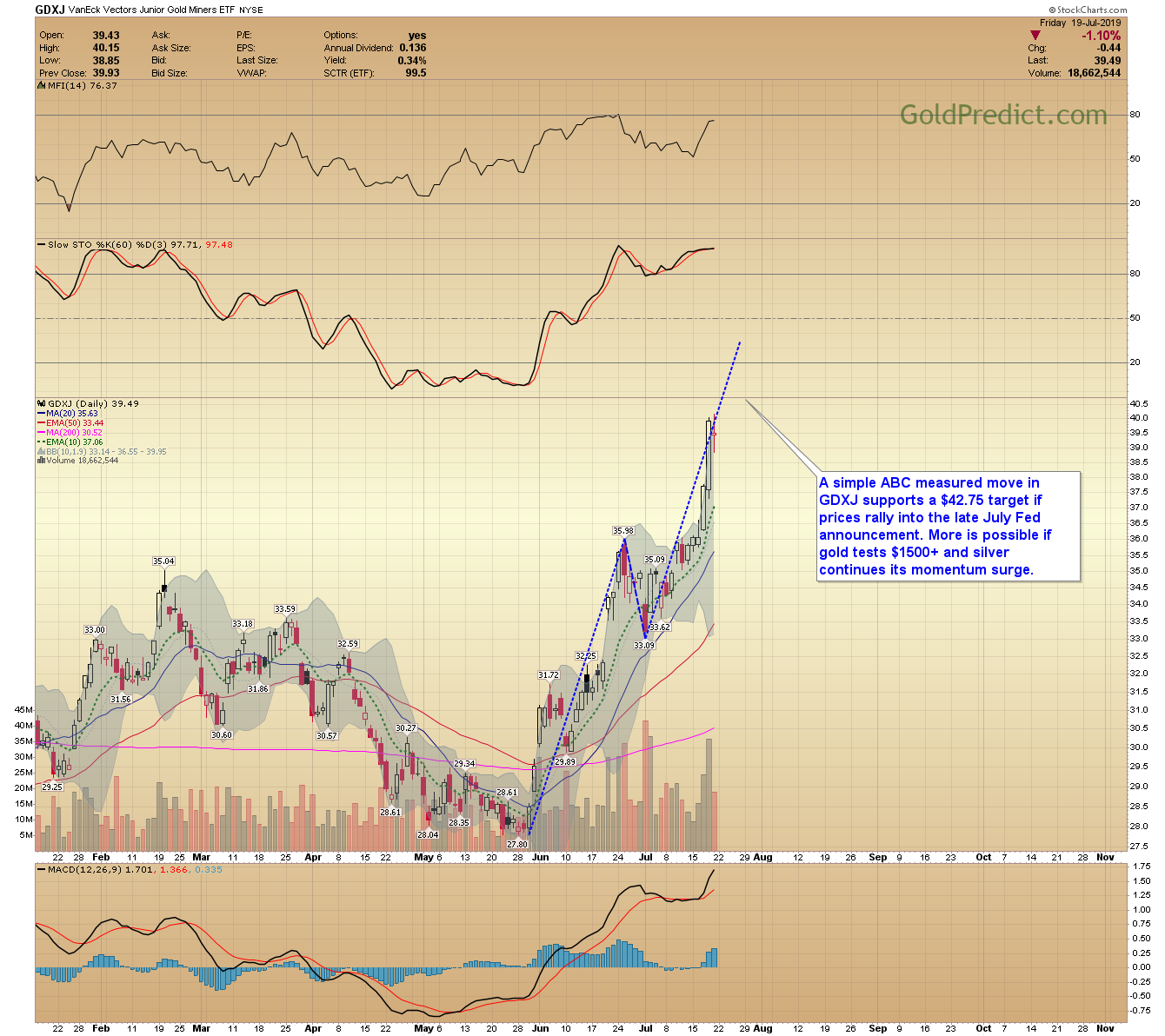 -NORTHERN DYNASTY MINERALS (NAK)- I’ve been looking at Northern Dynasty Minerals as a speculative play. As electric vehicles are adopted, I think copper demand could soar. There is something like 130 – 180 pounds of copper in each fully electric vehicle — an electric bus contains over 800-lbs. Their pebble project has significant gold reserves as well. Permitting has been a nightmare, and they may never build a mine. I look at this as a long-term ‘options -type’ play. I could lose everything, but if things go well, it could turn into a 50 or even 100-bagger. 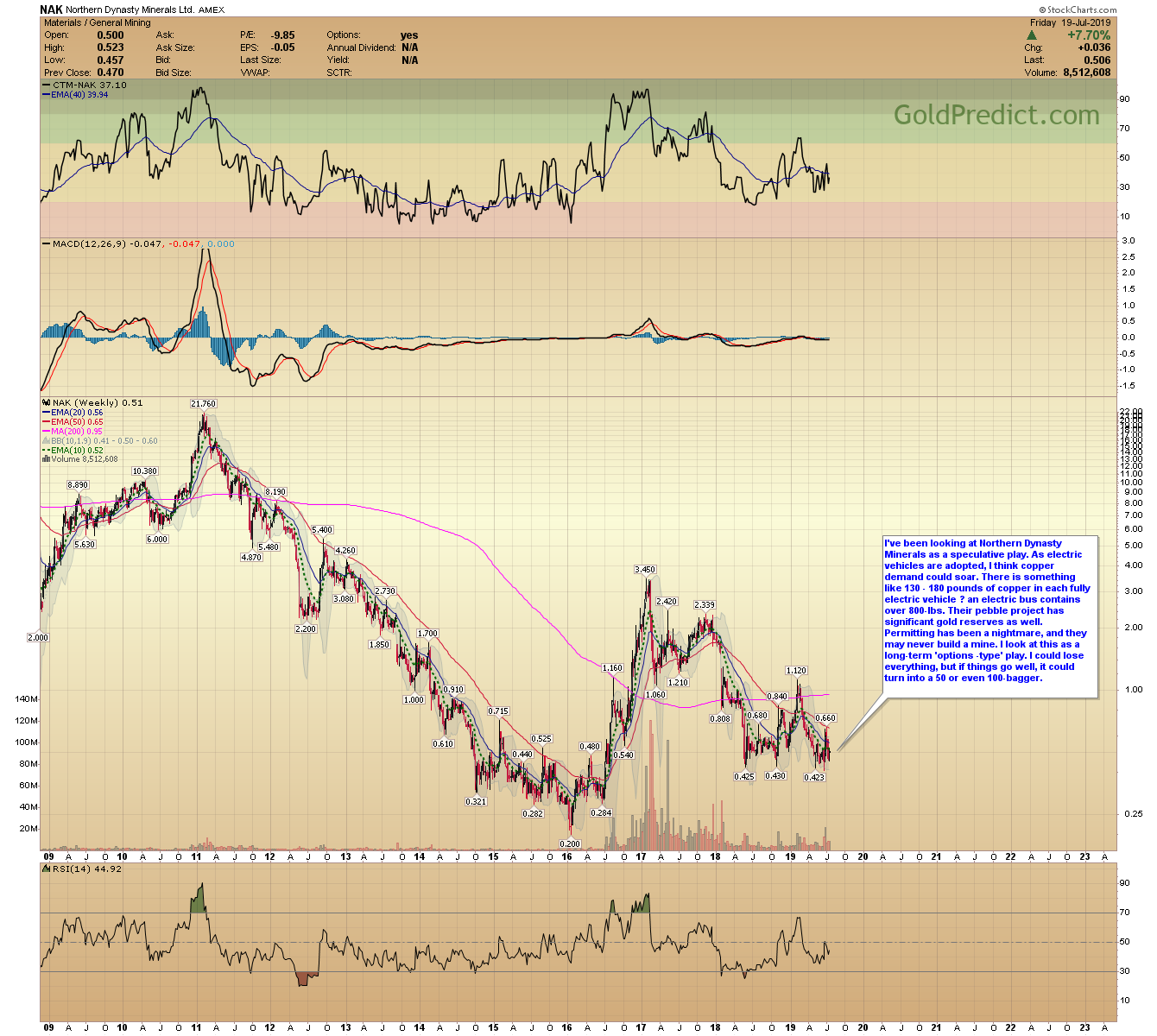 The next decade should be great for gold and hard assets. I’m taking a long-term approach. When prices are exploding higher, I’ll take a little money off the table. Don’t worry – there will be pullbacks, sometimes terrifying.

Don’t overleverage! If you’re losing sleep at night or daydreaming about the yacht you’ll buy – then you’re probably overcommitted. When leverage works, it’s great – when it doesn’t, it can destroy your account.

I’ll maintain a core position and continue to add to it until I feel the gold bull market is mature. I’ll allocate some funds for trading and some to speculative mining stocks. There will be plenty of time to make money, so resist impulsive buying. Don’t take an all-in or all-out approach…play the long game.

Before I go, I want to thank you for your commitment to Gold Predict. The twists and turns have been challenging as gold forged out its 6-year base. I made some good calls and some pretty bad ones too, but you guys have been great.

I’m excited about the coming decade and see lots of potential to make money. Soon, I’ll be rolling out a new portfolio section where members can view current trades. I’ll also be changing our indicator system to something more useful. Once or twice a month, I’ll include speculative stock plays like Northern Dynasty Minerals (NAK).

This article was published Posted on July 21, 2019 in Categories Free Updates, Weekend Newsletters