What a wild day. After reaching $1412 this morning, gold prices began to bounce. Prices were near $1430 around 1:30 when the Trump administration announced additional tariffs of China starting in September. The stock market reversed suddenly and gold jumped an additional $25.00 before the 4:00 PM close.

It’s impossible to predict these events, and that’s why I prefer a long-term approach. The short-term fluctuations are incredibly difficult to trade; it’s easy to get caught on the wrong side.

Gold has one more hurdle to overcome, tomorrows employment report. If prices continue to rally beyond that, then the odds support a run to $1500 – $1525 before the next significant pullback.

Below is the 30-minute dollar chart with its corresponding Fed-day extremes. Prices climbed to nearly 99 after yesterdays Fed announcement and have since been correcting. A sustained decline below 98 would register a bearish reversal and imply more downside. 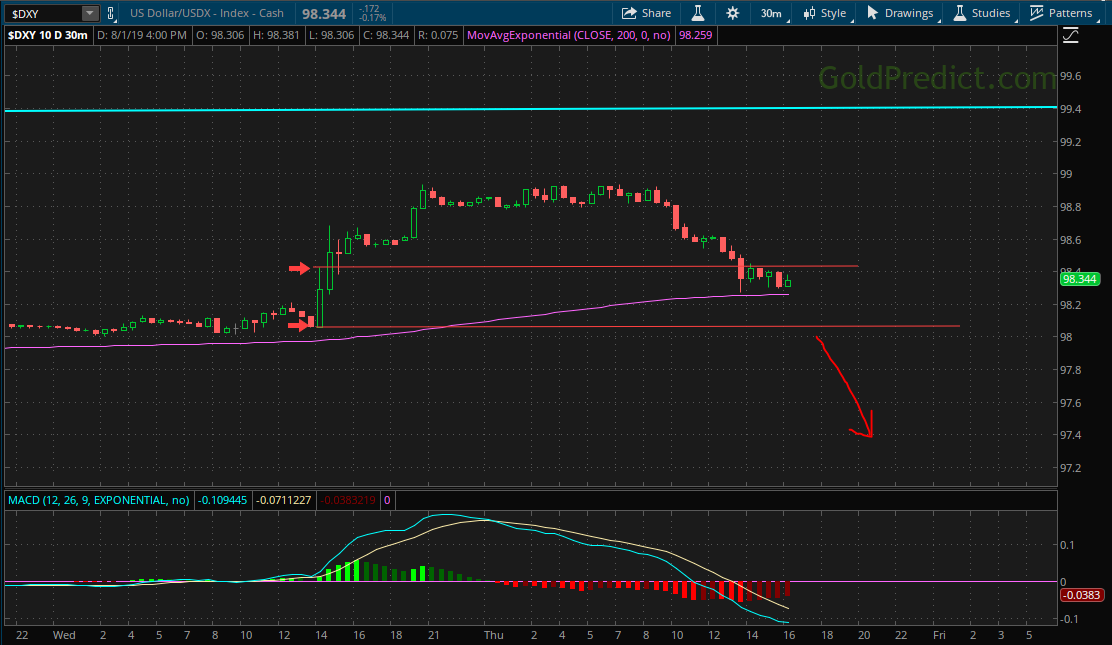 -GOLD- The chart doesn’t show it, but gold finished the day above $1450 and reversed yesterday’s selloff. Gold jumped $25.00 after 1:30 PM when Trump announced additional tariffs on Chinese goods. The July price action is beginning to look like a running correction. Closing above $1470 would support a run to $1500-$1525 before the next significant pullback. 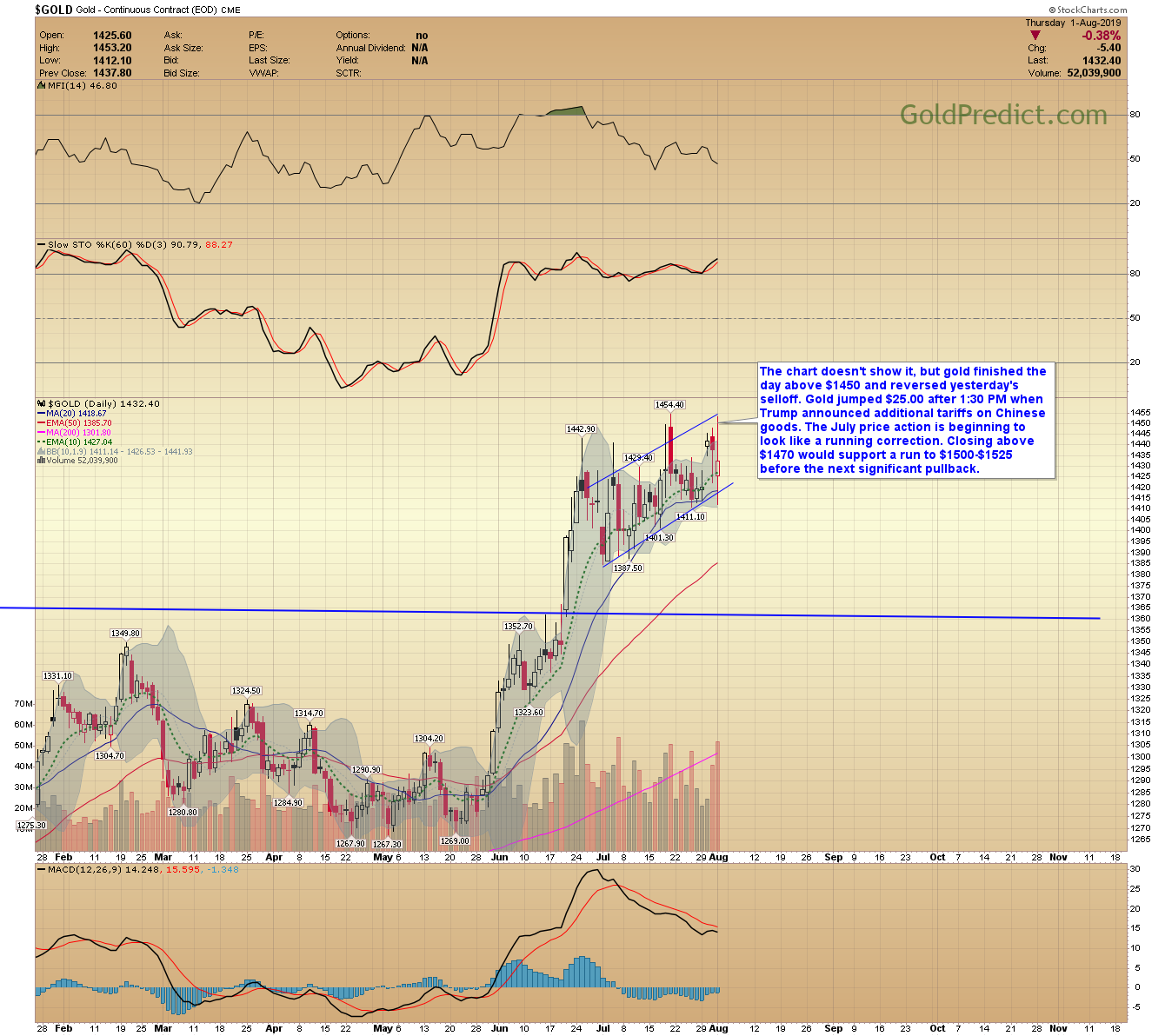 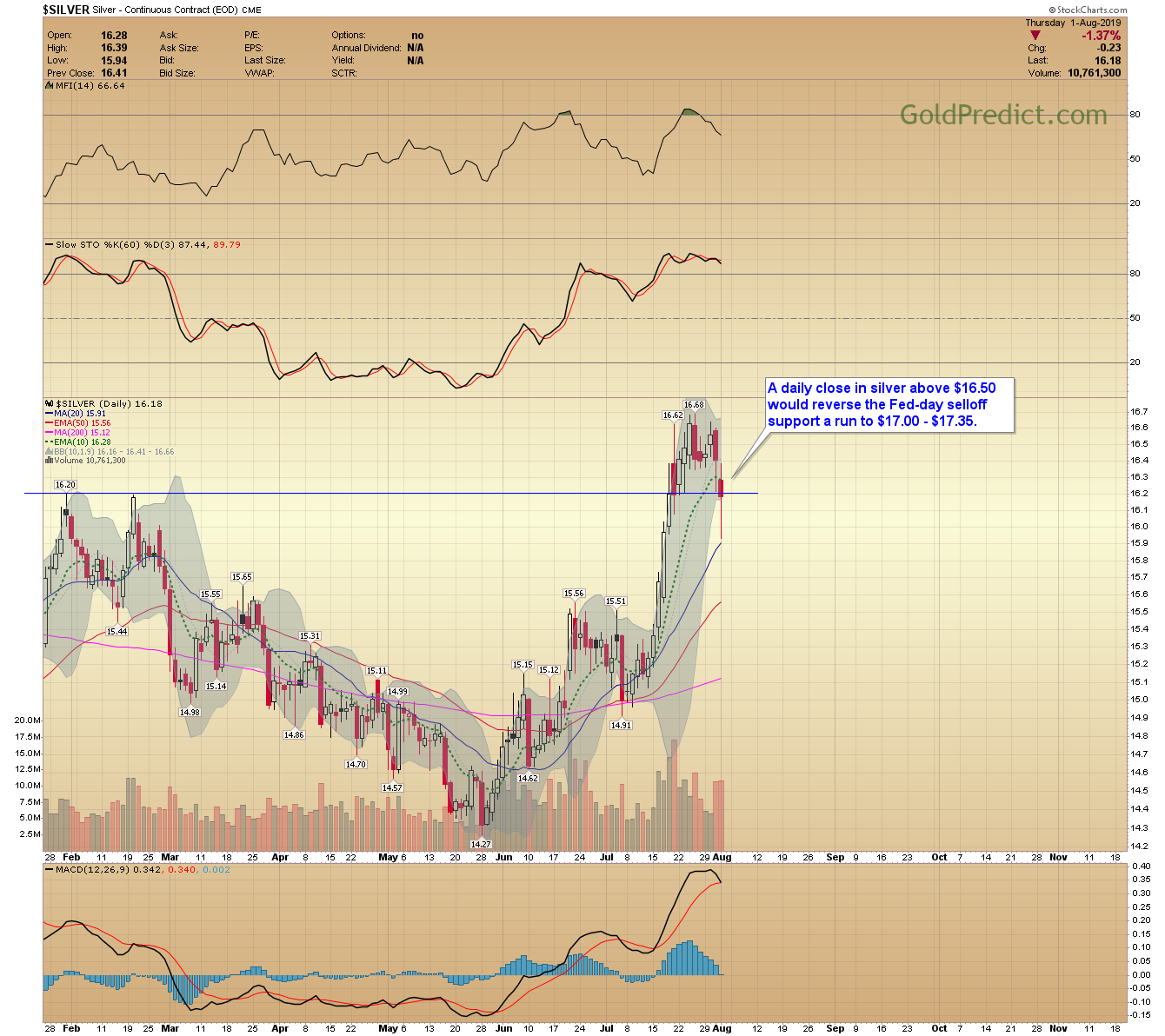 -GDX- Prices reversed yesterday’s Fed selloff and finished with a large bullish engulfing candle. It’s possible prices formed a cycle low at today’s open, but it’s too soon to tell. The 45-day cycle supported a potential turning point around August 5th (Monday). If the cycle bottomed today, then it arrived a few days early. The next three trading days are crucial, a cycle top on or around August 5th remains possible if gold is unable to close above $1470 in the coming days. 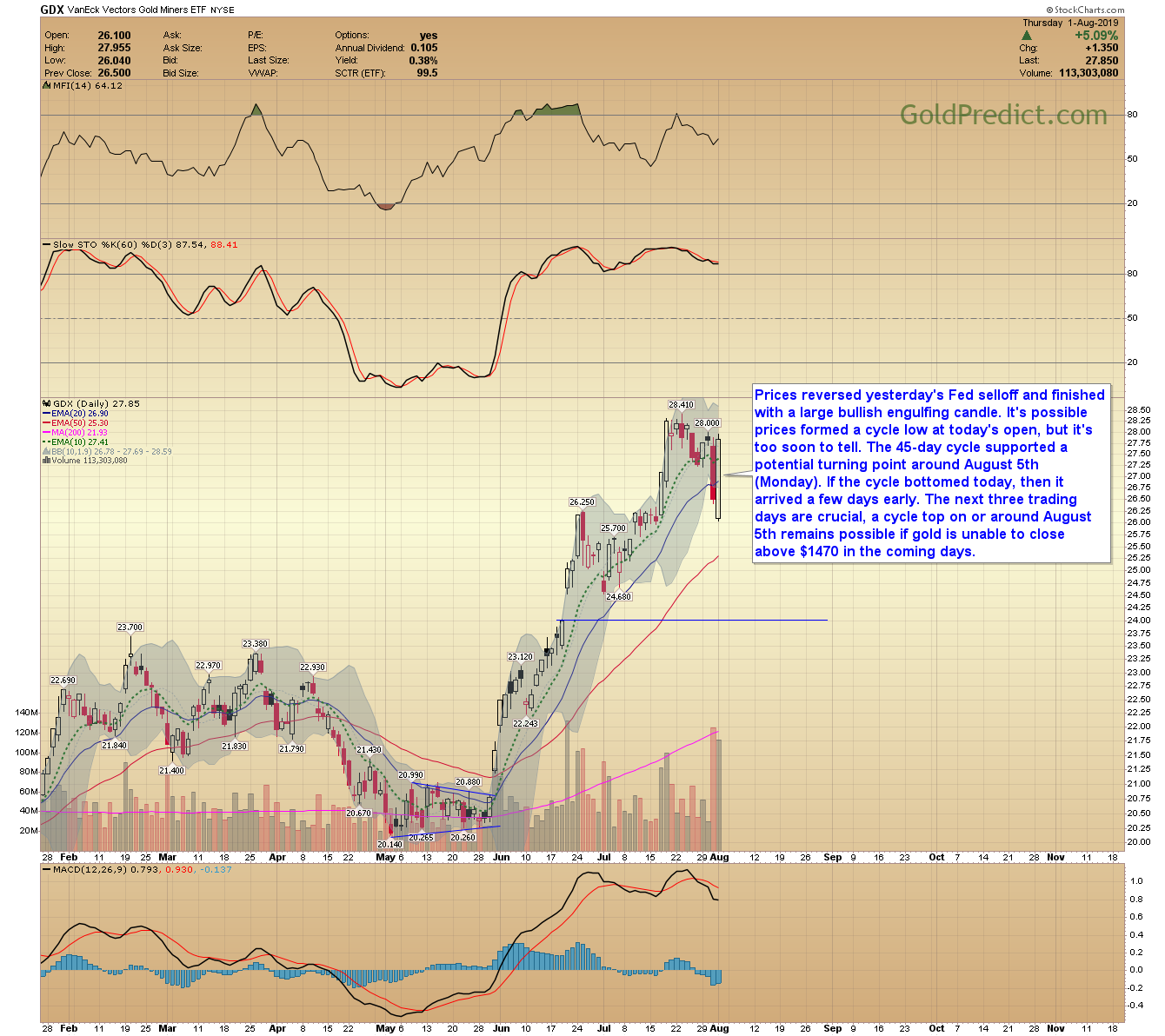 -SPY- After being up more than 1%, stocks reversed sharply after the tariff announcement. Progressive closes below the 50-day EMA could trigger a sharp selloff. 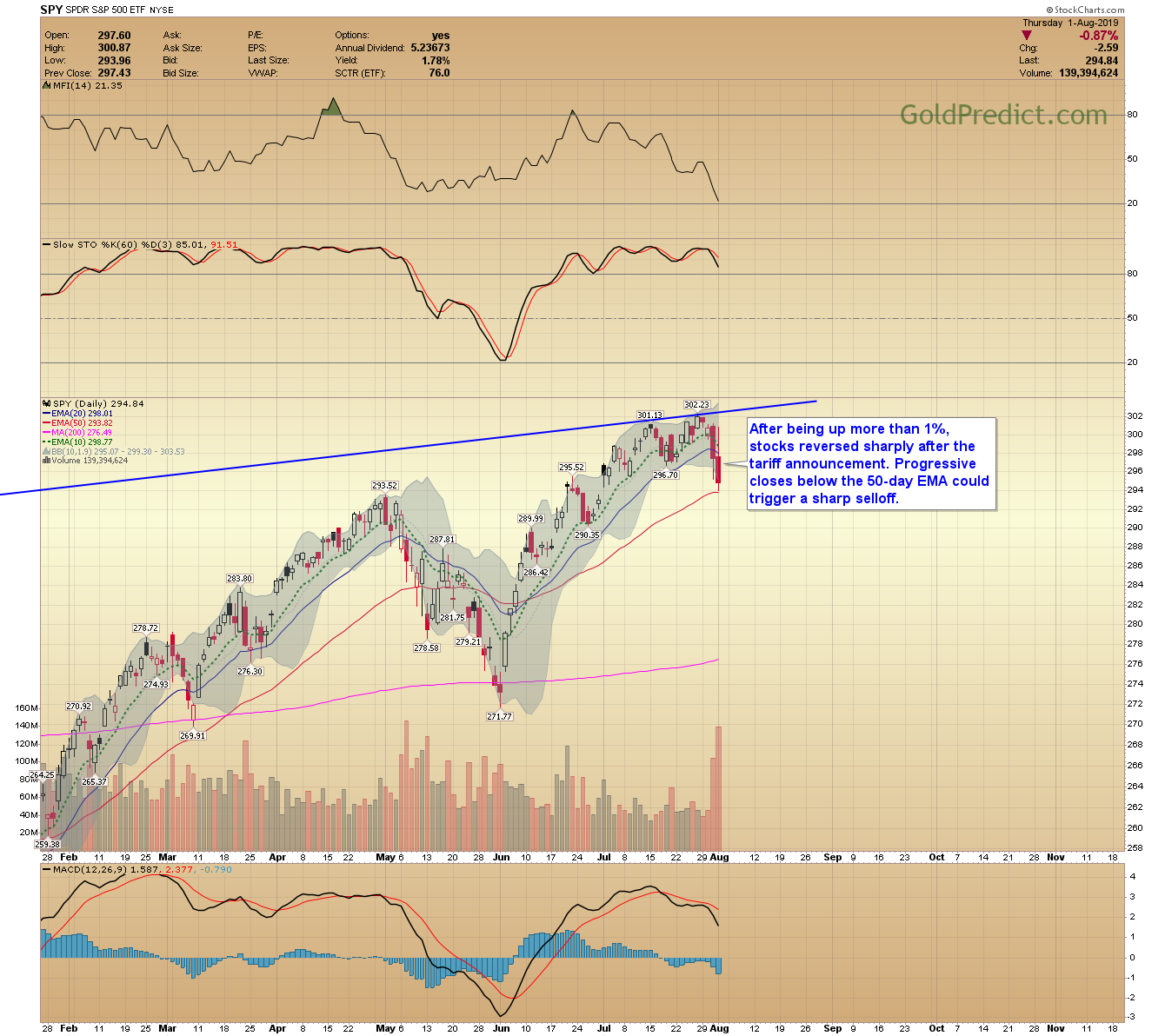 -WTIC- The selloff in oil accelerated rapidly after the tariff announcement, and prices finished nearly 8% lower. Oil is testing support at $54.00. A continued collapse below $50.00 would recommend a retest of the December low ($42.36). 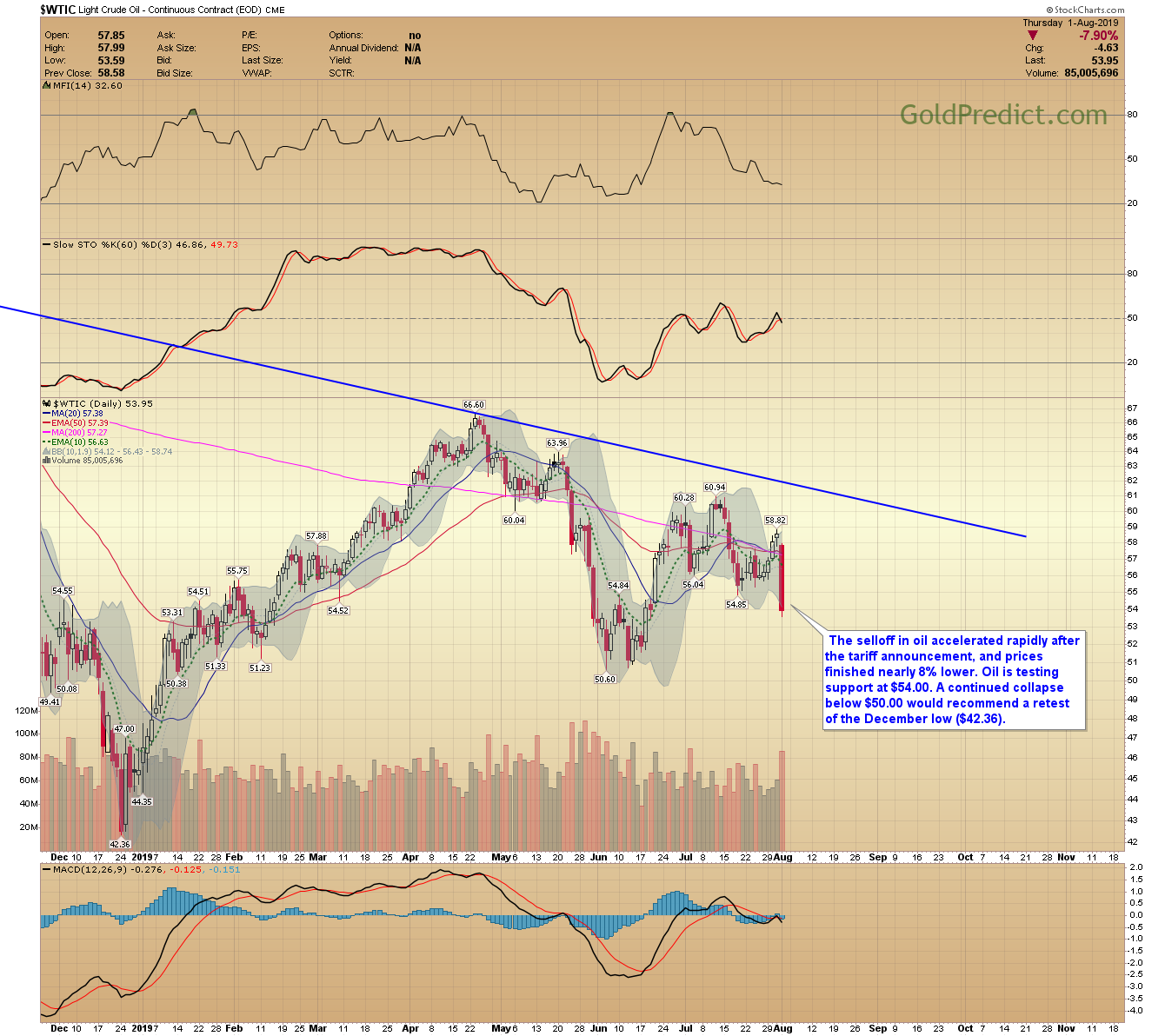 I’ll update once or twice tomorrow. Have a great night.

This article was published Posted on August 1, 2019 in Categories Free Updates, Reports