I remember when I first discovered cycles – it was like a lightbulb went off, and everything started to make sense. I learned that if you can find the natural rhythm of a financial asset, then timing that market gets a lot easier. For example, if a stock or commodity is forming cyclical lows every 12 – 14 weeks, you probably don’t want to buy on week 8 – you’d wait a few more weeks and buy as the cycle bottoms naturally.

With gold, I found the following to be true:

In 2015 I did an in-depth study of the long-term cycle in gold and determined that it averages about 8-years between bottoms. Diving deeper, I discovered that each low corresponds with the US Presidential elections (+/- 4-Months). And lastly, there may be some predictive value as the sequence supported a Republican (Trump) victory in 2016.

The 8-year Cycle: Gold tends to form major lows about every 8-years. These lows arrive around the time (+/- 4-months) of a US presidential election. The arrows in the quarterly chart below depict each 8-year cycle low since 1976. 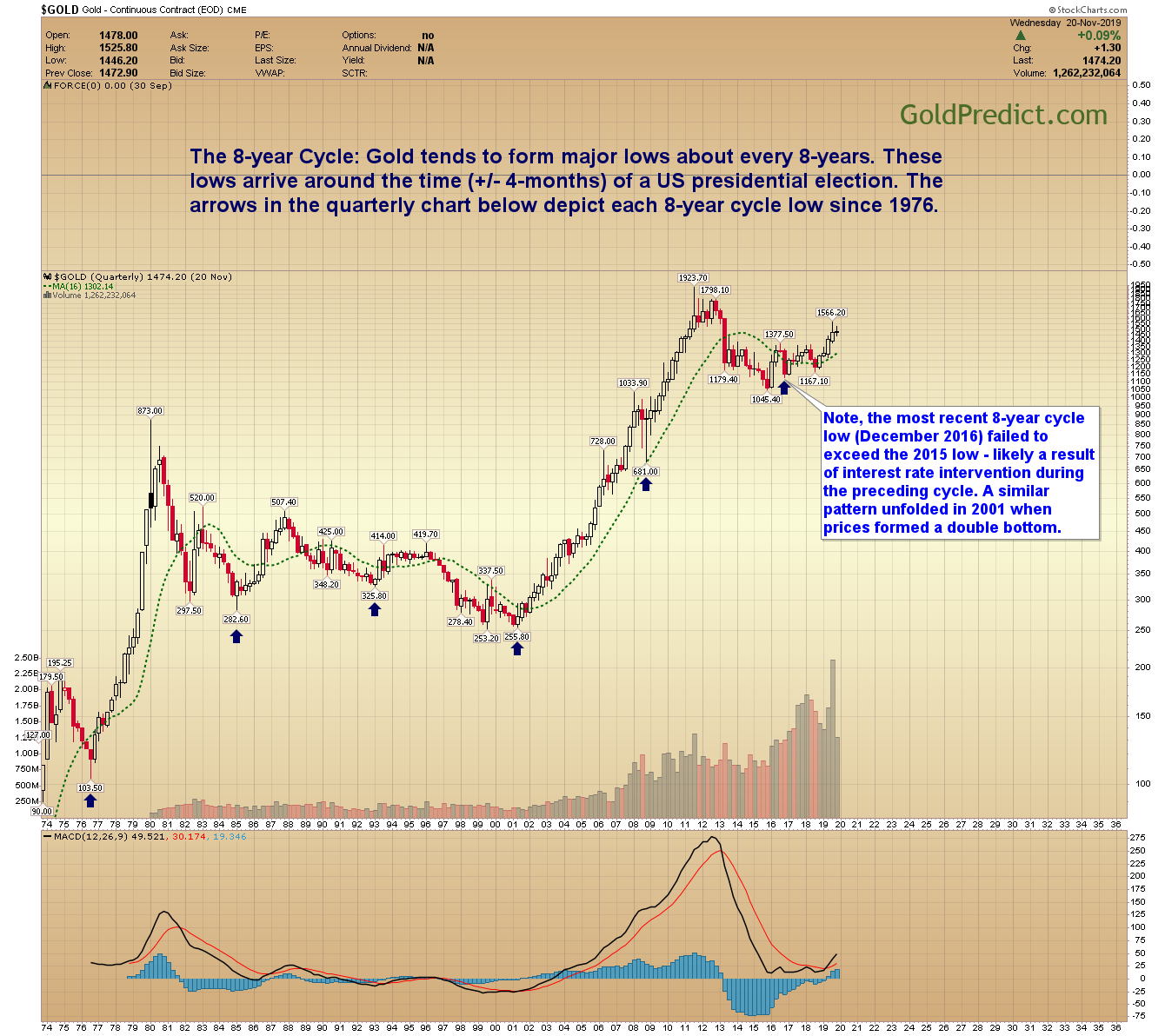 Note, the most recent 8-year cycle low (December 2016) failed to exceed the 2015 low – likely a result of interest rate intervention during the preceding cycle. A similar pattern unfolded in 2001 when prices failed to make a lower low and created a double bottom.

***The next major 8-year cycle low is due between July 2024 & March 2025 and recommends a Democratic victory (incumbent or otherwise).

Here’s an example of several 6-month lows and one 8-year low. The 6-month cycle can be more volatile and less predictable than the 8-year series. On occasion, a 6-month period will stretch out to 8 or 9-months. When that happens, the next cycle is usually shortened, lasting just 3 or 4-months. 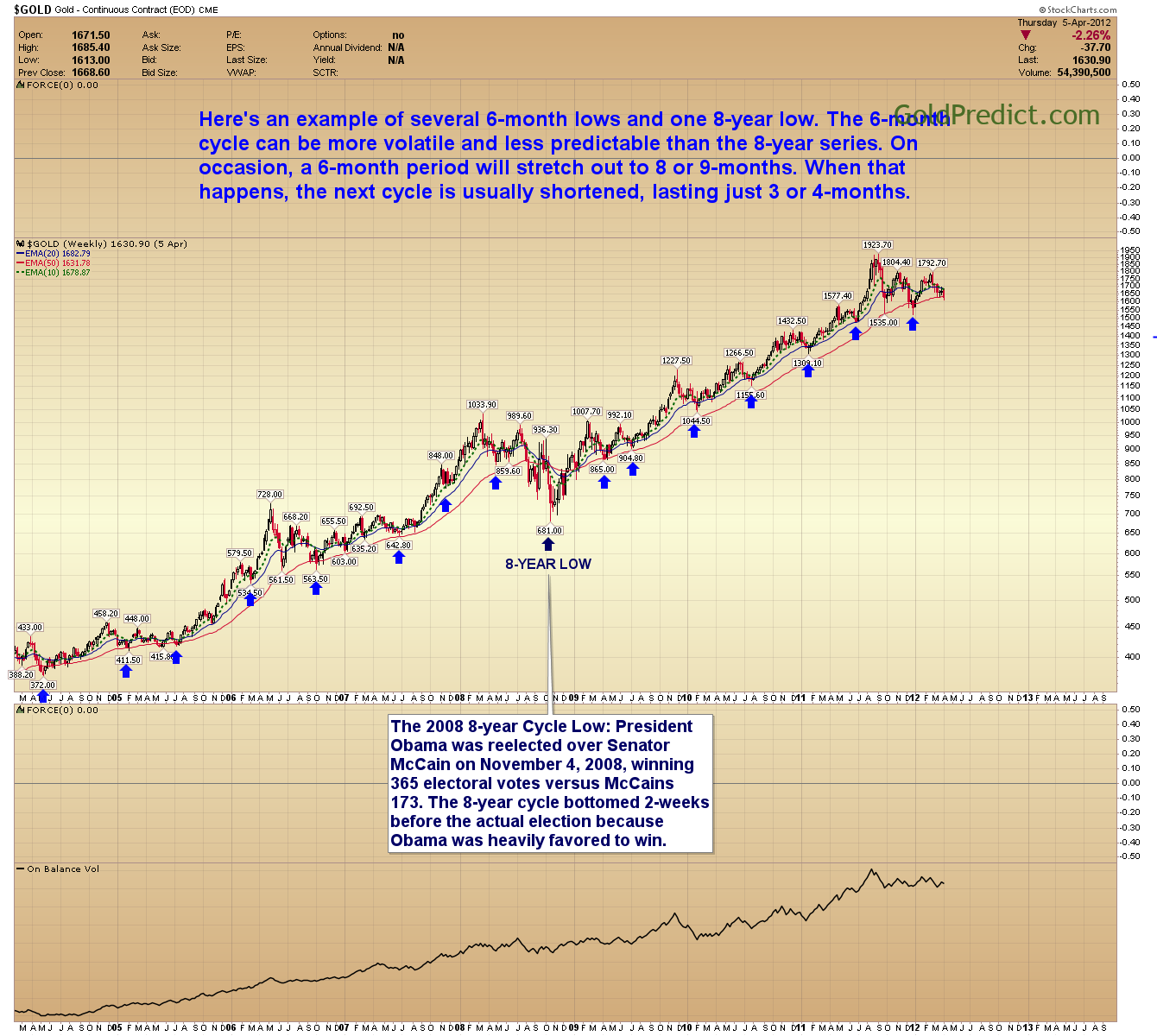 The 2008 8-year Cycle Low: President Obama was reelected over Senator McCain on November 4, 2008, winning 365 electoral votes versus McCains 173. The 8-year cycle bottomed 2-weeks before the actual election because Obama was heavily favored to win.

Each 6-month cycle is usually comprised of two or three lesser degree cycles (green arrows) lasting, on average, about 55-trading days. The decline into a 6-month cycle low should break at least one of these lesser cycles lows producing a failed cycle. 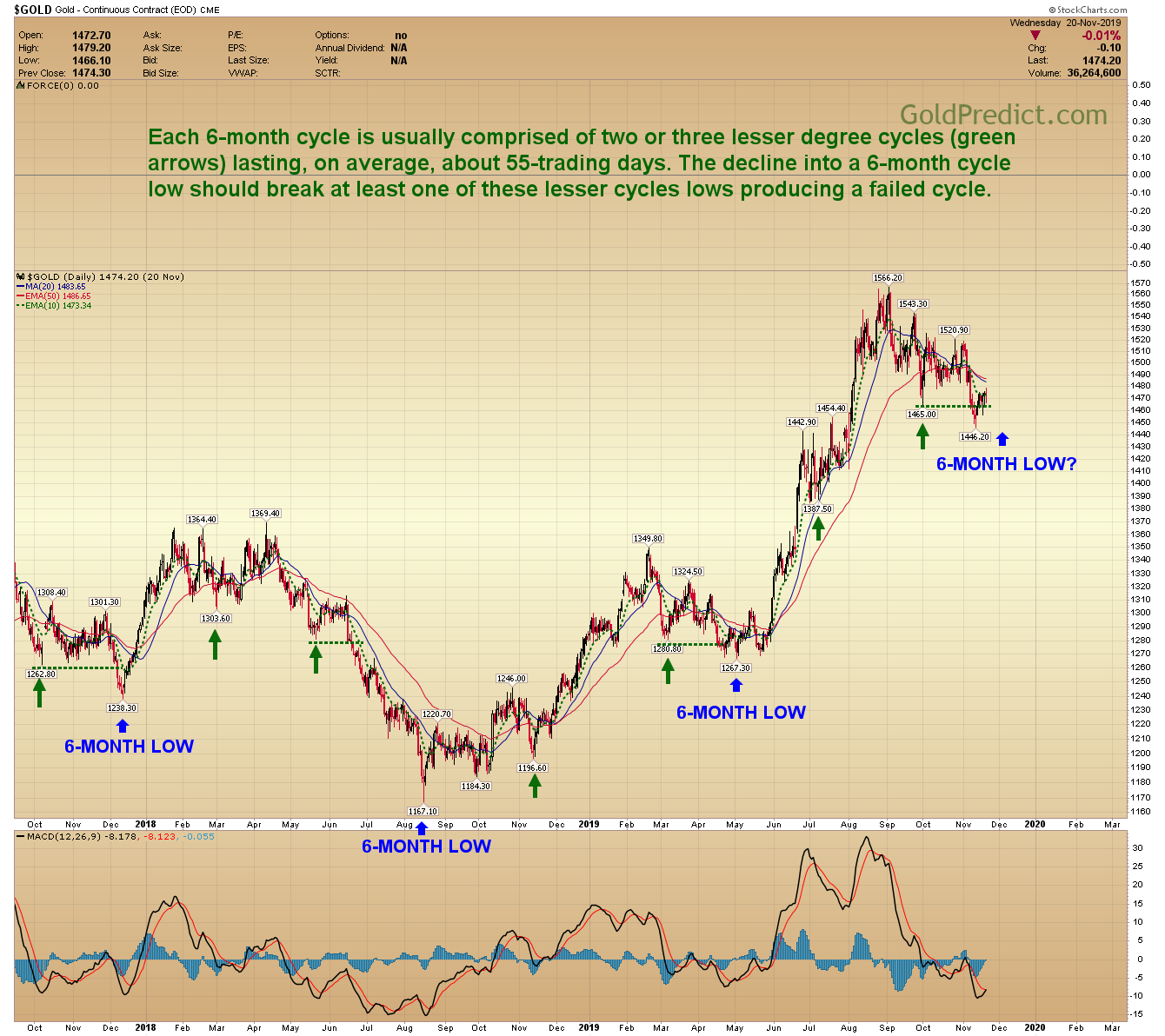 ***I designed the Gold Cycle Indicator (GCI) around the 6-month cycle. Because some cycles run long and others short, it was not feasible to catch every turn – those events are considered outliers. With this in mind, the GCI was created to detect the majority of cyclical turning points.

This article was published Posted on January 2, 2020 in Categories Free Updates