Little changed in precious metals, prices continue to consolidate. I do see a correlation in gold that could imply an upward breakout within the next 1 to 3 trading days. A daily close above $1600 would reinforce this view.

Since little changed concerning gold, I’d like to spend some time talking about Tesla and Elon Musk.

As an investor, there is nothing better than buying and holding a stock that grows exponentially in value, think Apple and Amazon. I spend a lot of time looking for these opportunities. I believe Tesla (Elon Musk) holds massive potential, and I think they could become the next Apple. Unfortunately, right now, the stock is insanely overvalued.

There is a lot of hype over the company, and prices have soared. Just today, they announced a stock offering of $2 billion, and instead of crashing, prices rallied nearly 5%. What? A company dilutes shareholder value by adding 2.65 million shares, and it goes higher – INSANITY.

For that reason, I’m frustrated with the stock. It might be another year or two before prices drop to a reasonable level. I think the next recession could provide an excellent opportunity.

TESLA LONG-TERM BUY STRATEGY
Longer-term, I intend to buy Tesla whenever prices dip below the red band. Above the red band, implies prices are extremely overbought. If Tesla turns into the next Apple, then this is a stock I’ll hold and eventually pass down to my grandchildren. 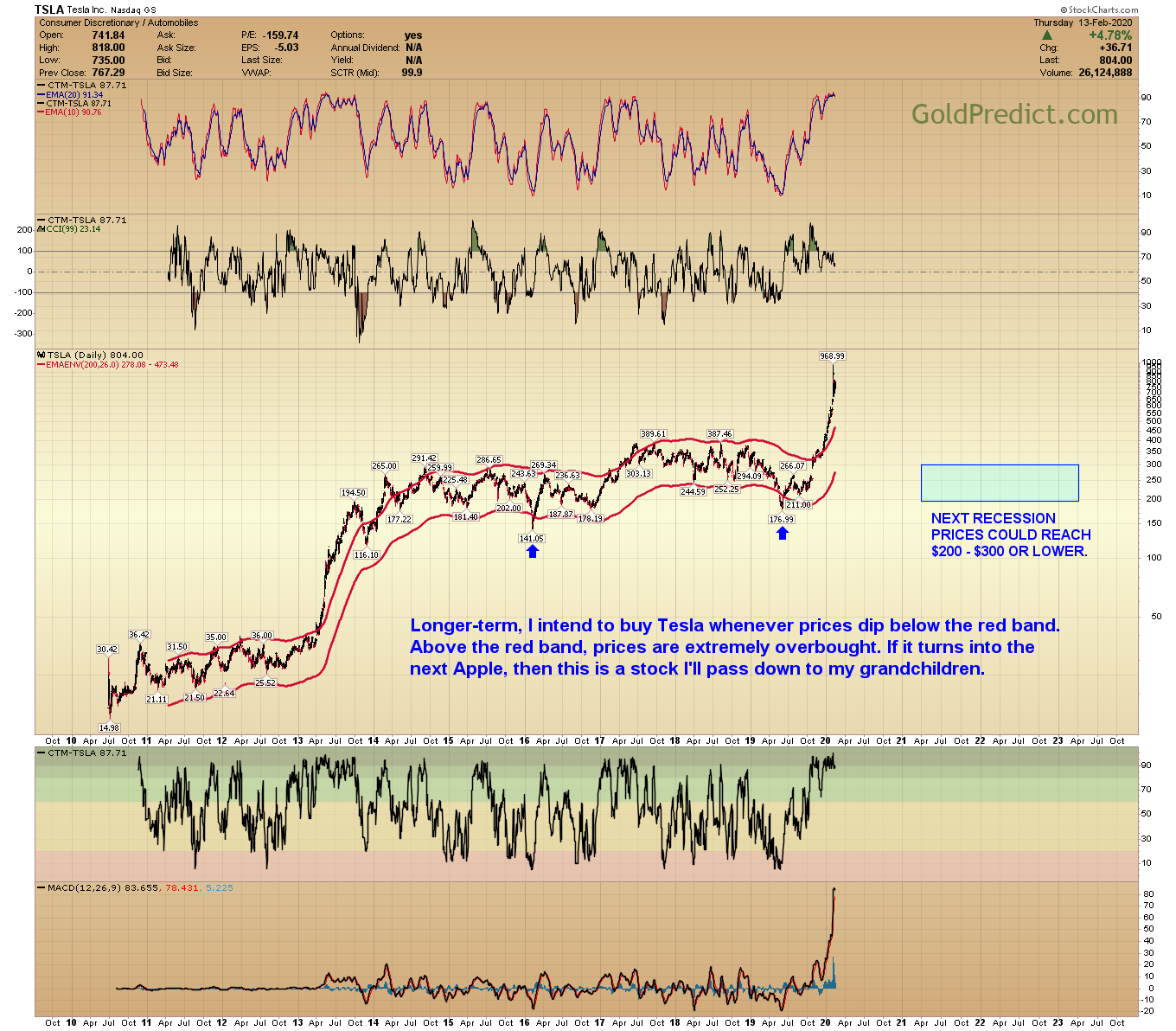 LONG-TERM CHART OF APPLE (Comparing to Tesla)
Here is a chart of Apple from 1984 to today. If Tesla becomes the next Apple as I suspect, then I think we are here in the current trend (late 1999 to 2000). If correct, then it may be a good idea to load up on TSLA during the next major pullback (recession). 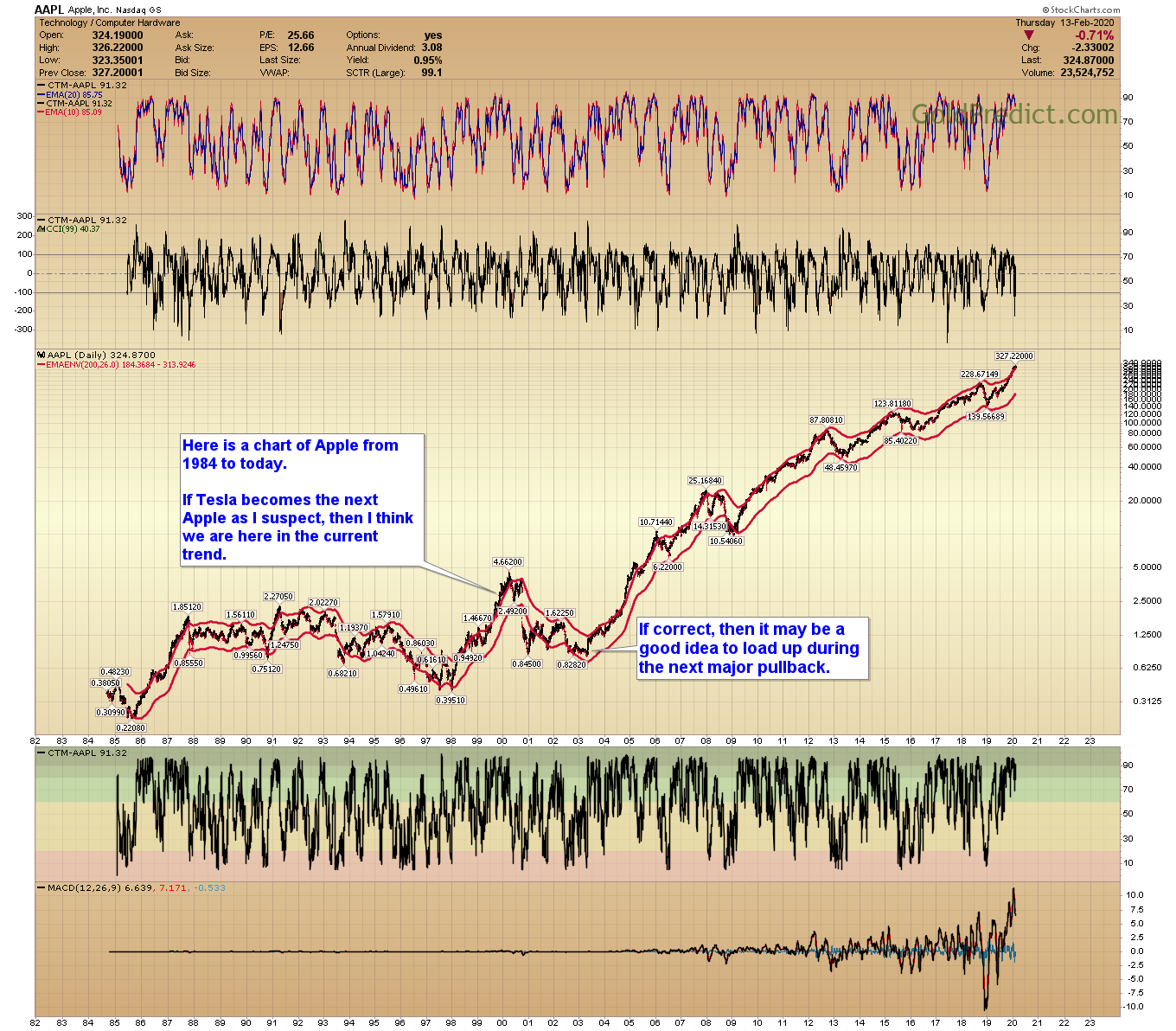 Let me be clear – this is PURE SPECULATION…Tesla could flop. Nevertheless, I like the story, and I like Elon Musk. When prices stabilize, I will be buying.

On to the metals!

-GOLD- The more I look at the chart, the more I realize the current mid-cycle consolidation is mimicking last July. If correct, then we should see an upward breakout above $1600 within the next 1 to 3 trading days. And that should lead to a terminal rise to around $1700 by mid-March. 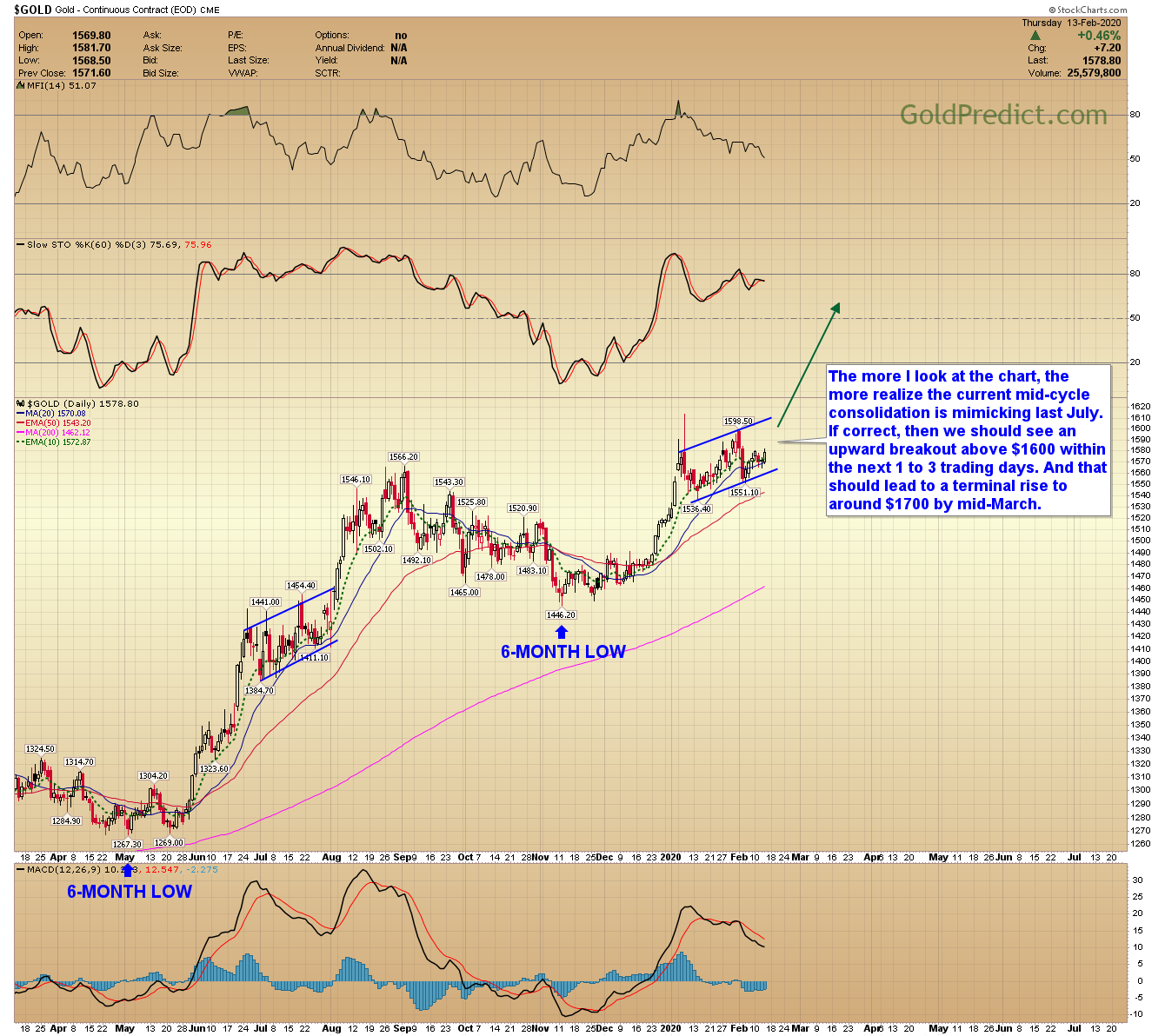 -SILVER- Silver continues to disappoint. Nevertheless, a breakout above the short-term timeline should lead to another leap higher, possibly sharp. 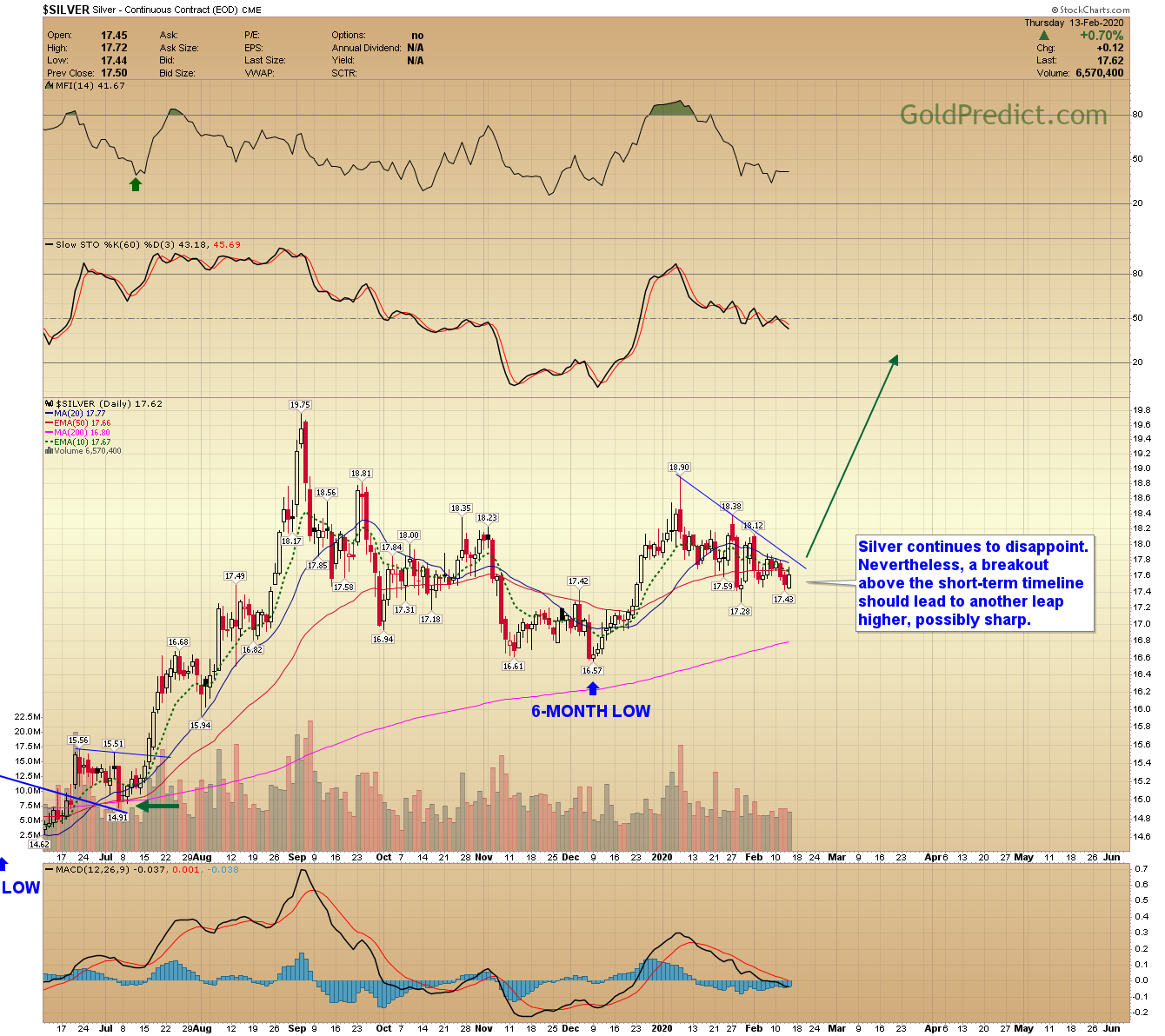 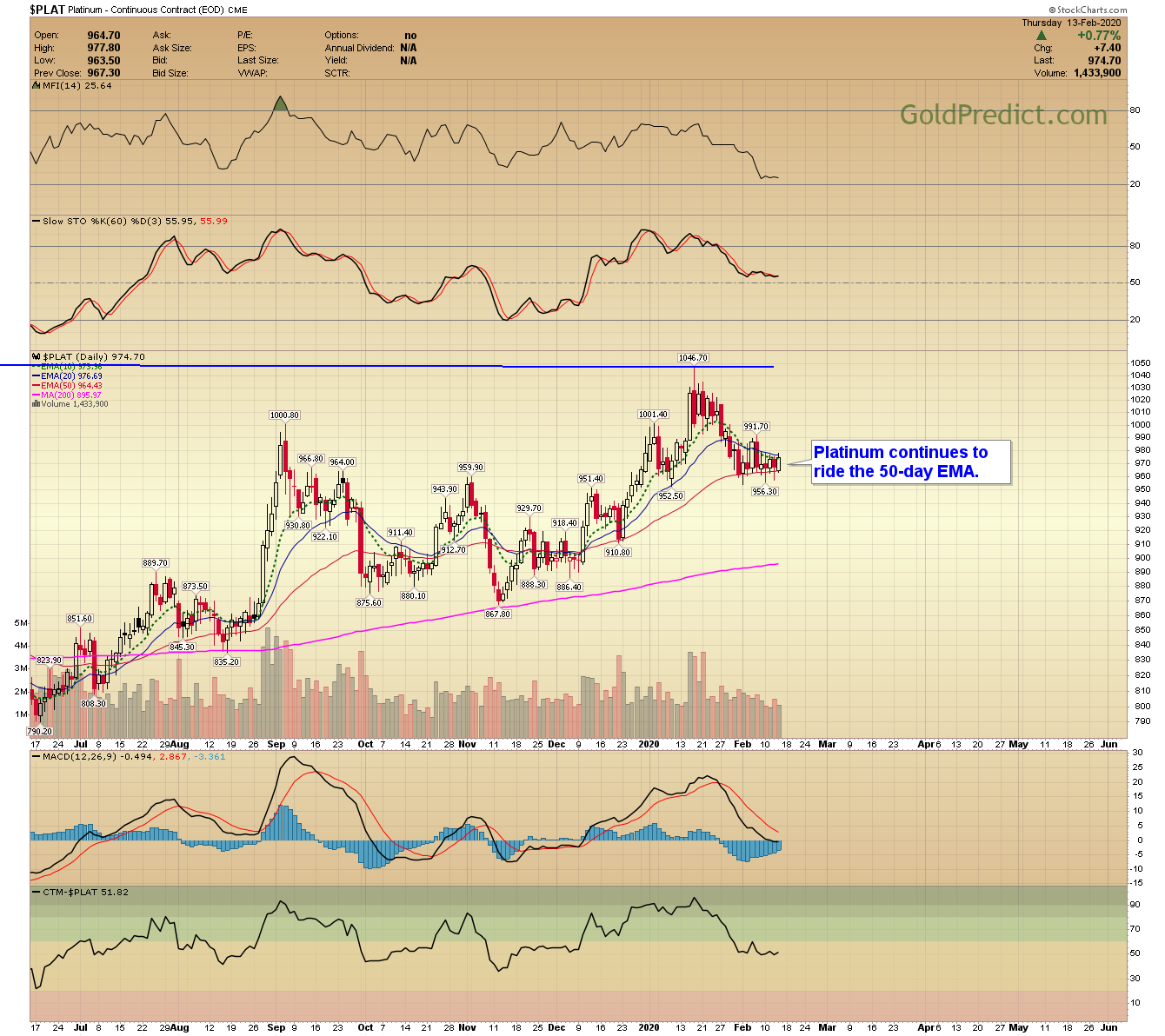 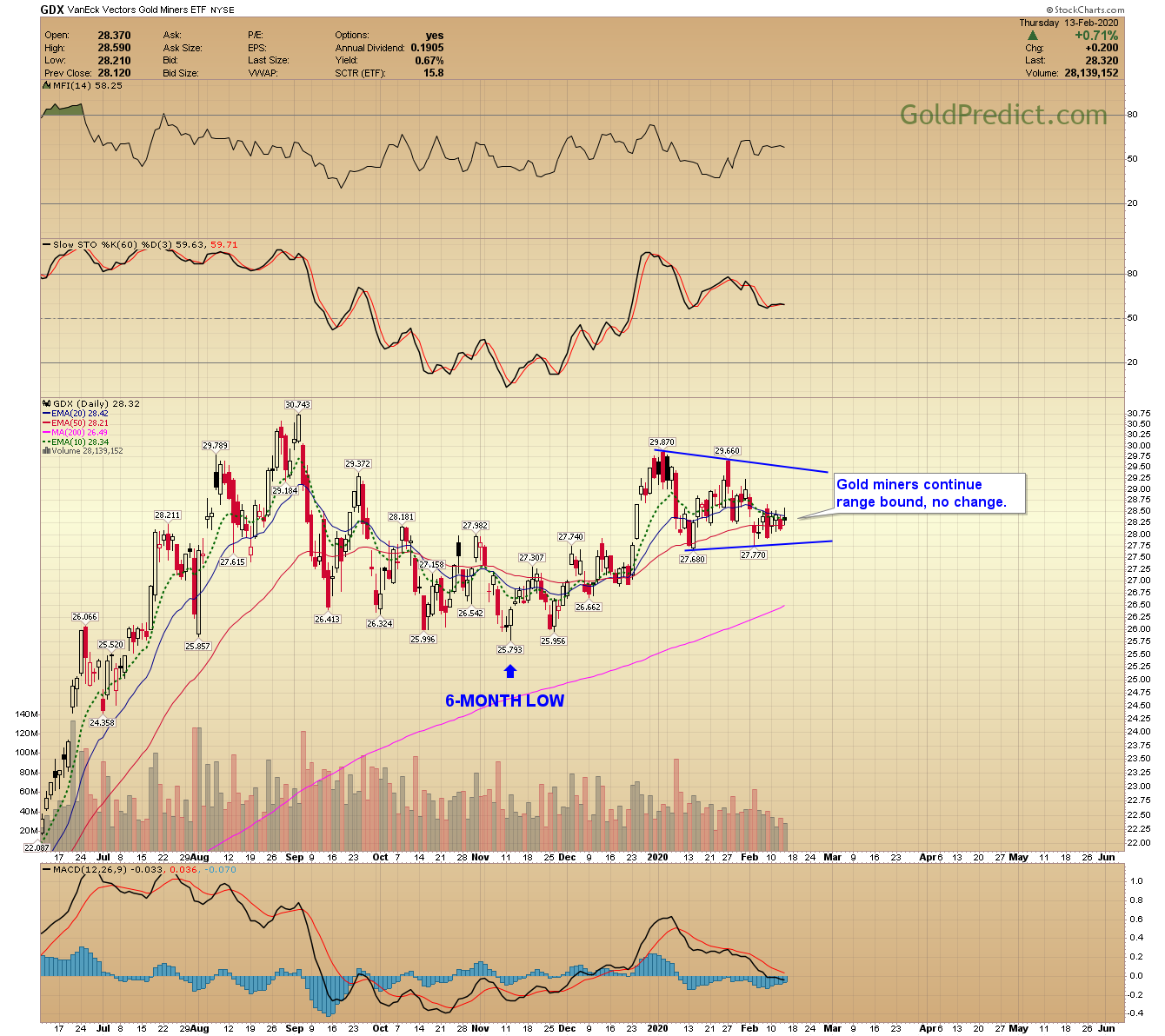 Gold needs a nice $20.00+ up day to trigger the final advance into March.

Potential triggers for such an event? Friday’s retail sales, a spike in the coronavirus over the weekend, or next week’s FOMC minutes.

This article was published Posted on February 18, 2020 in Categories Free Updates, Reports