The stock market continues to price in a V-shaped recovery, which I find very unlikely. More and more companies are filing for bankruptcy every week, and I see that trend continuing. The destruction to the economy will likely take one to two years to fully realize.

What we are witnessing is something called creative destruction. This is where old businesses that were inefficient (Blockbuster), are replaced by something better (Netflix). This happens every decade or so as the economy evolves and adapts to emerging trends.

Times of difficulty and upheaval give birth to new visions. Entrepreneurs capitalize on these trends, and new businesses form. I see massive potential in online education, robotics, as well as innovative forms of food delivery/production services.

The birthing period we are in will be difficult, and people will suffer. In an attempt to save the old, inefficient parts of the economy, governments will print vast sums of money. Their efforts will fail, eventually leading to a currency crisis – gold will benefit greatly.

The gold cycle indicator finished the week at 332. Prices are consolidating in the upper range of neutral.

THE 1929 CRASH: The stock market dropped nearly 50% over ten weeks before bottoming in November of 1929. 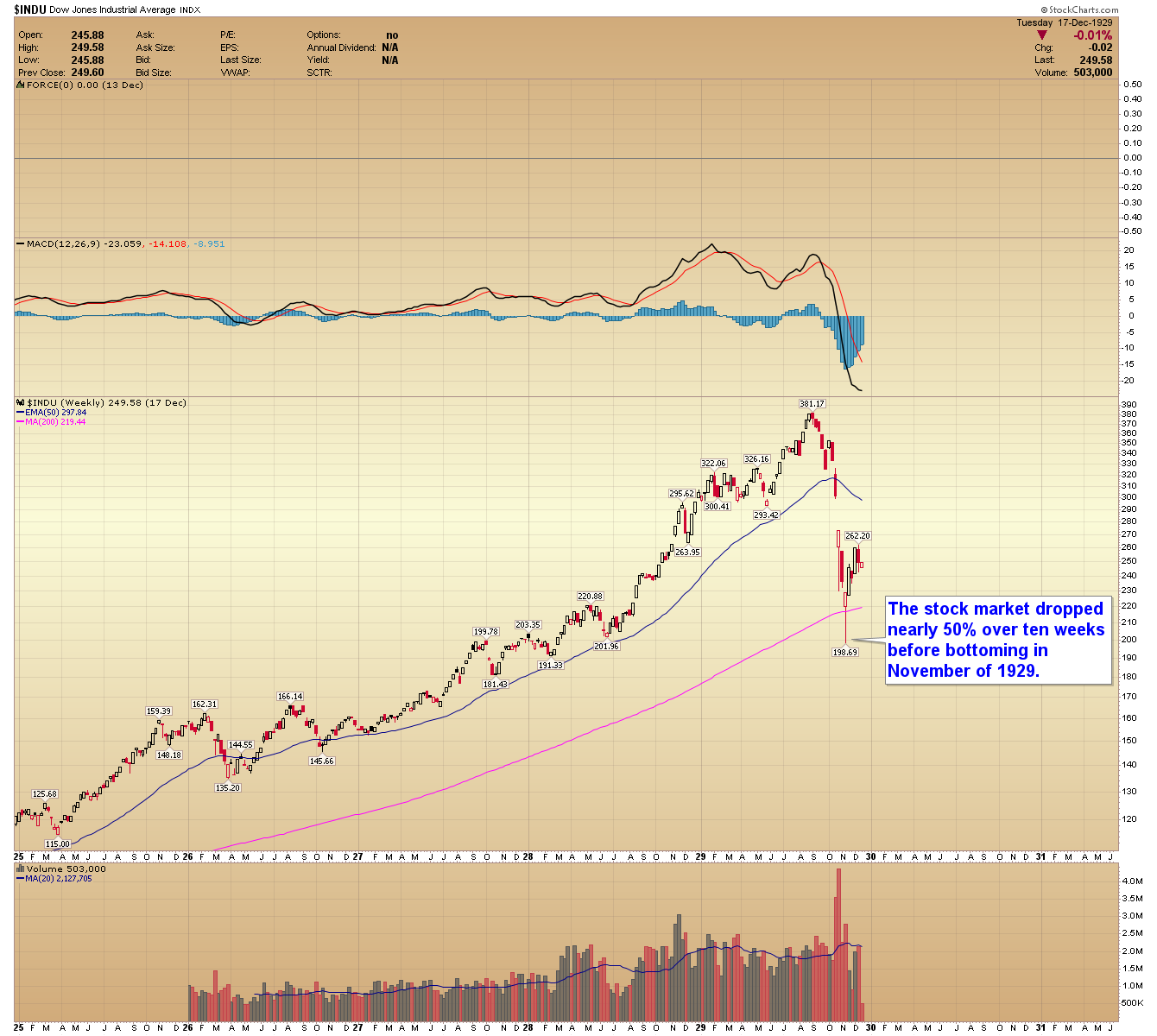 After bottoming in November 1929, the stock market rallied approximately 48% over the next 5-months. 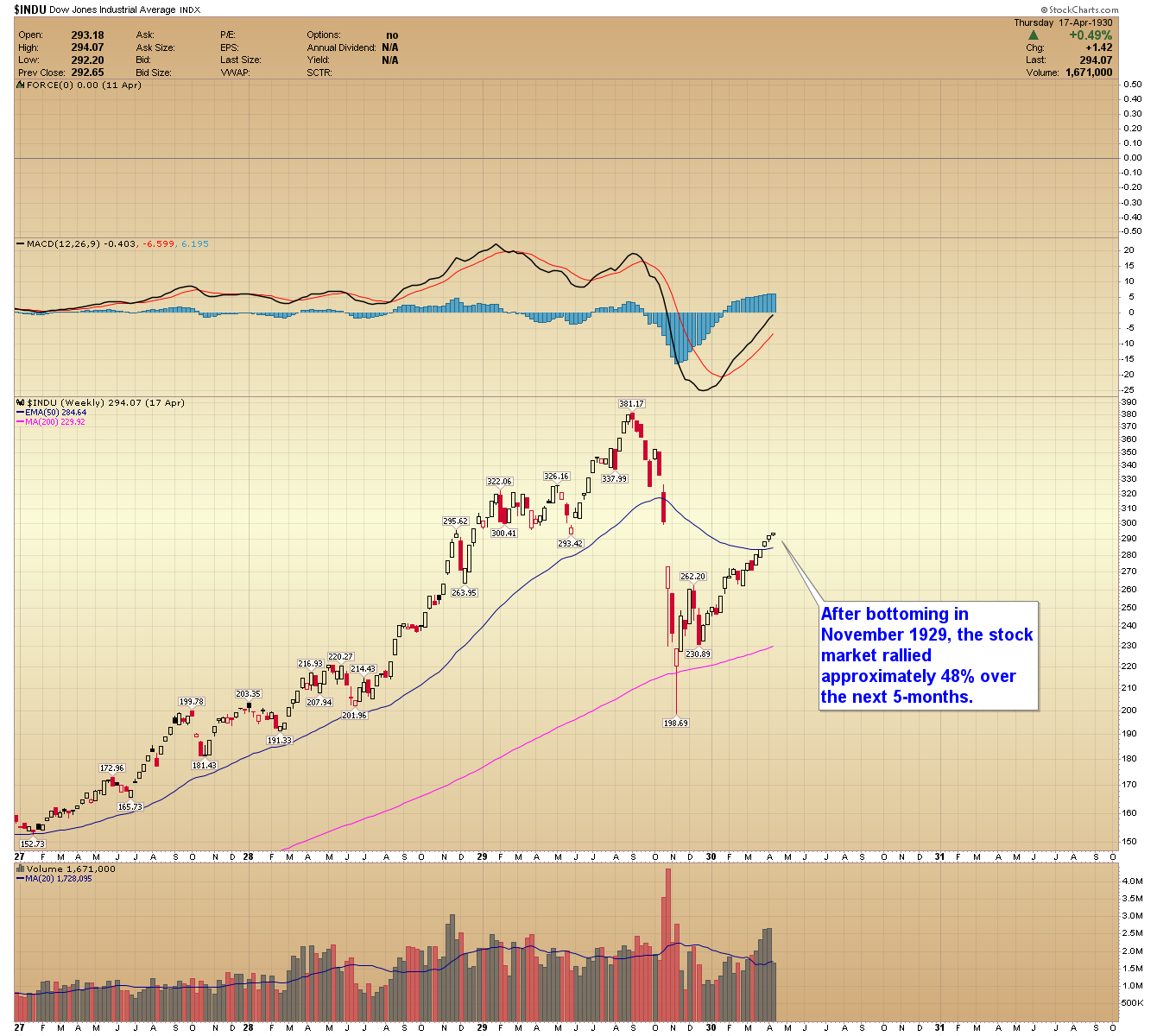 The initial bear market rally ended in April 1930 and was followed by a devastating 2-year decline. The market didn’t bottom until July 1932.

Will prices crash like that again? Probably not, there is too much money creation this time!

DOW 2020: The initial crash is over, and stocks are rebounding in anticipation of a V-shaped recovery. How high prices go is anybody’s guess, there is massive liquidity hitting the markets. However, I’d be surprised if this rebound exceeds 27,000.

As more and more companies file for bankruptcy, I think people will begin to realize the economy will not experience a V-shape recovery. Soon after that, stocks will turn lower and presumably drop to new lows. Depending on fiscal and monetary policy, and of course, a vaccine for the coronavirus, I don’t foresee the stock market bottoming until 2021 or 2022. 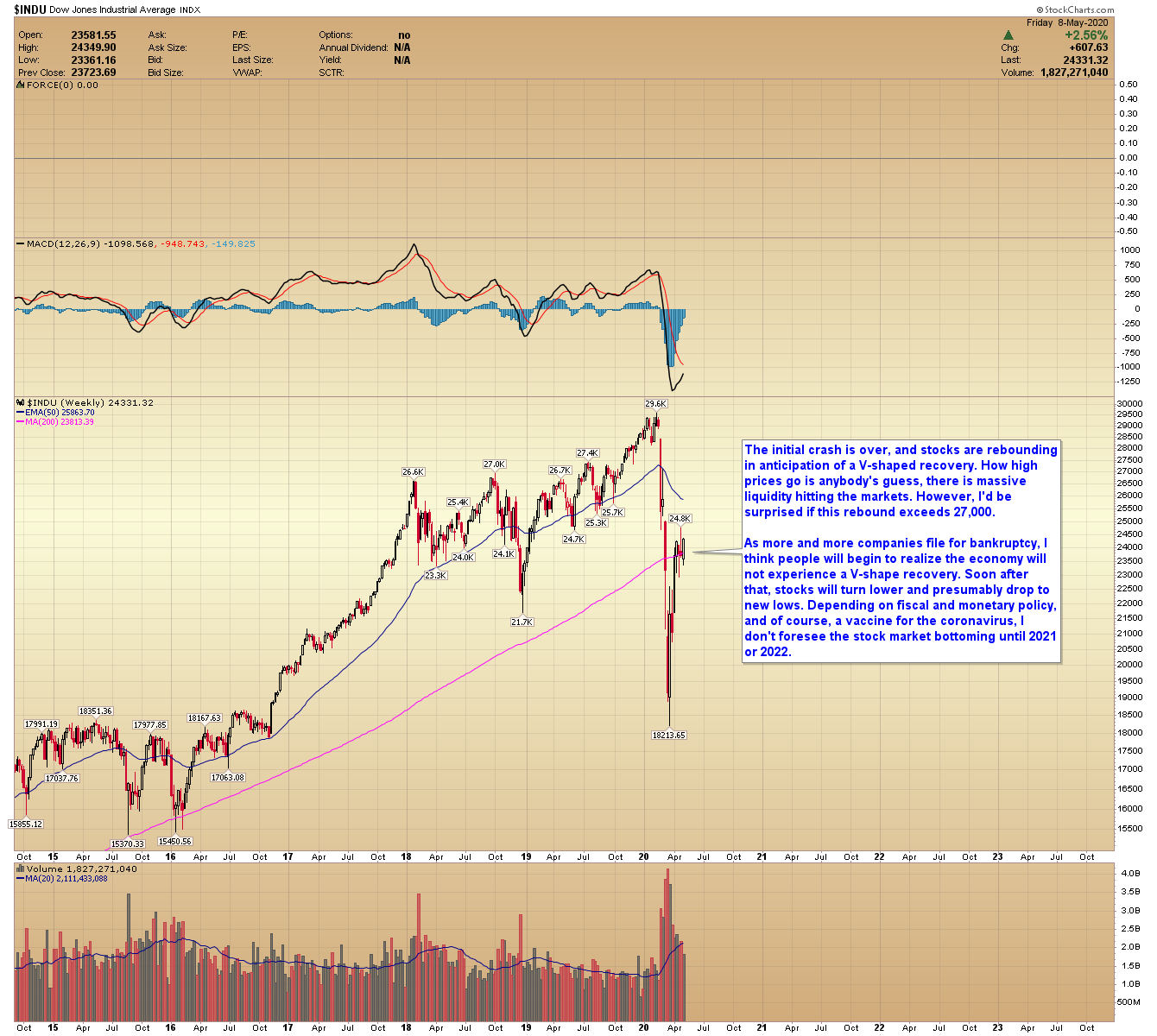 -GOLD- Prices are consolidating, and this could go on for another 1 to 3-months. I see two potential outcomes.

Longer-term, gold has no choice but to go much, much higher. How high is anybody’s guess – I have a minimum target of $8500. If governments lose all credibility, and the national debt exceeds 40-trillion, gold could reach insane levels well above $10,000. 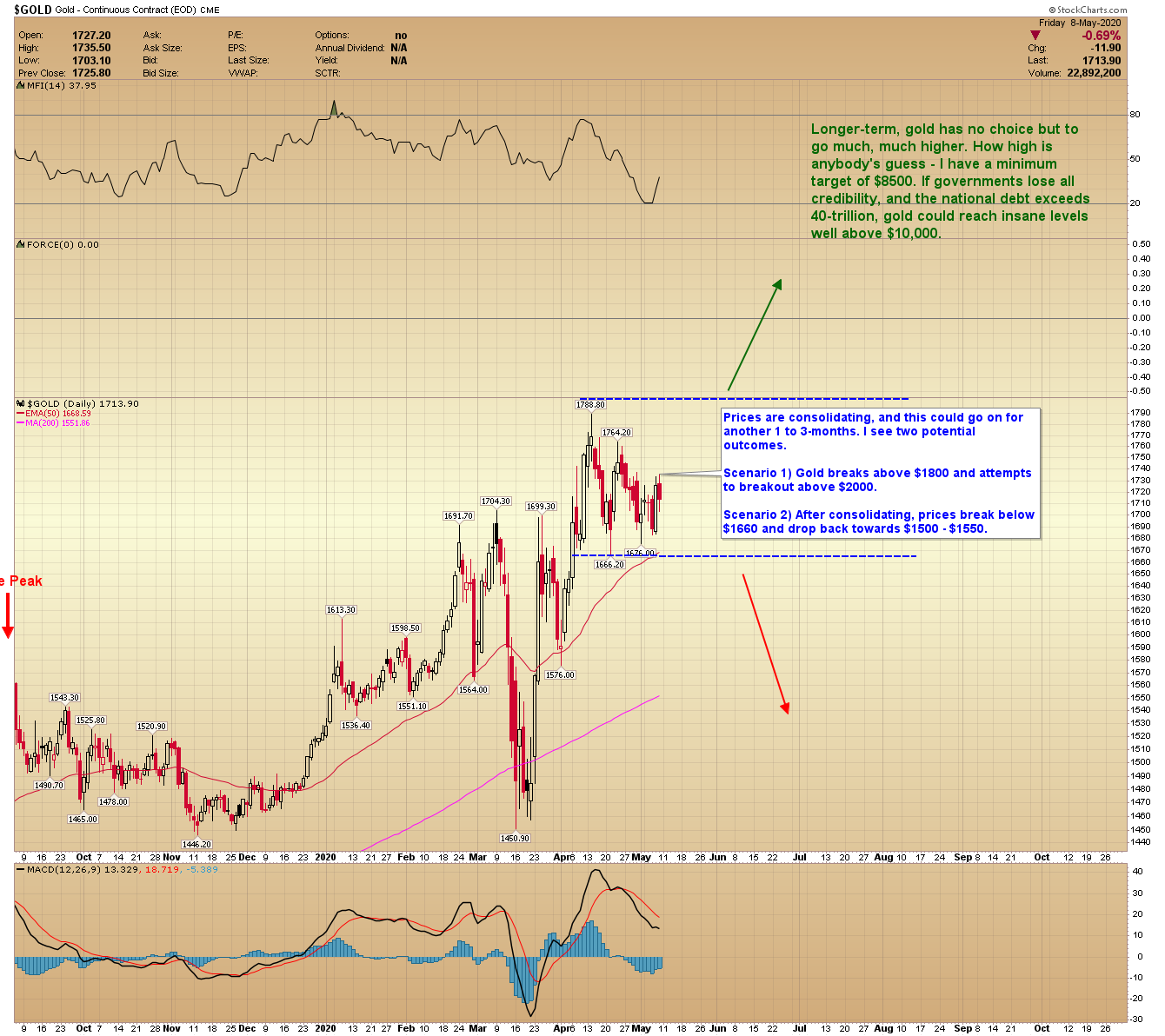 -SILVER- Silver is a bit more tricky as prices are more sensitive to the economy and industrial demand. I believe in silver long-term, and see prices rising well above $100, at some point. But in the meantime, deflationary forces could keep prices under pressure. It would take a decisive breakout above $20.00 to establish the next bull run. 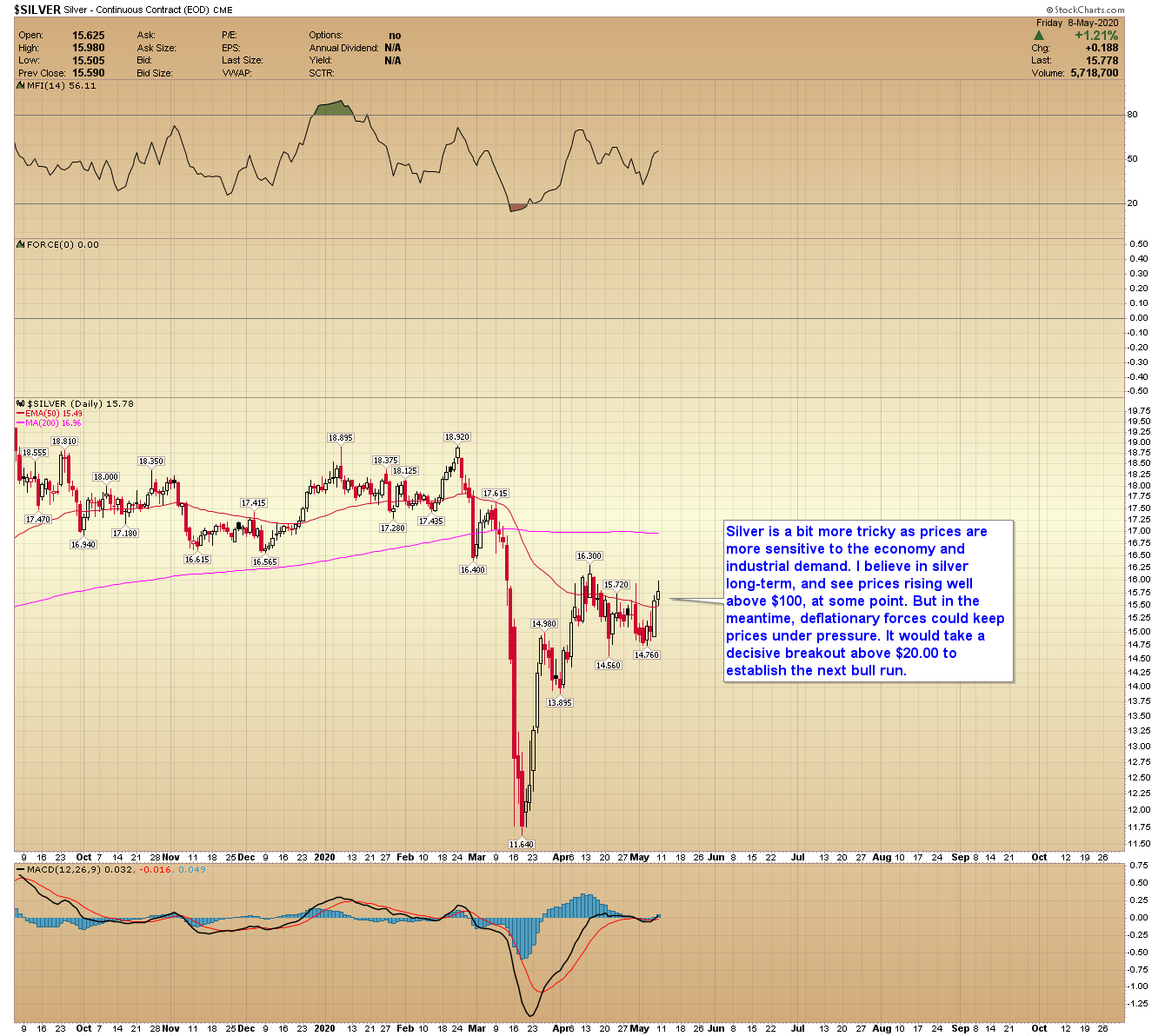 -PLATINUM- Like silver, platinum has significant industrial demand and is subject to deflationary forces in the economy. Longer-term, I believe it will go much higher and likely exceed the price of gold (at least temporarily). 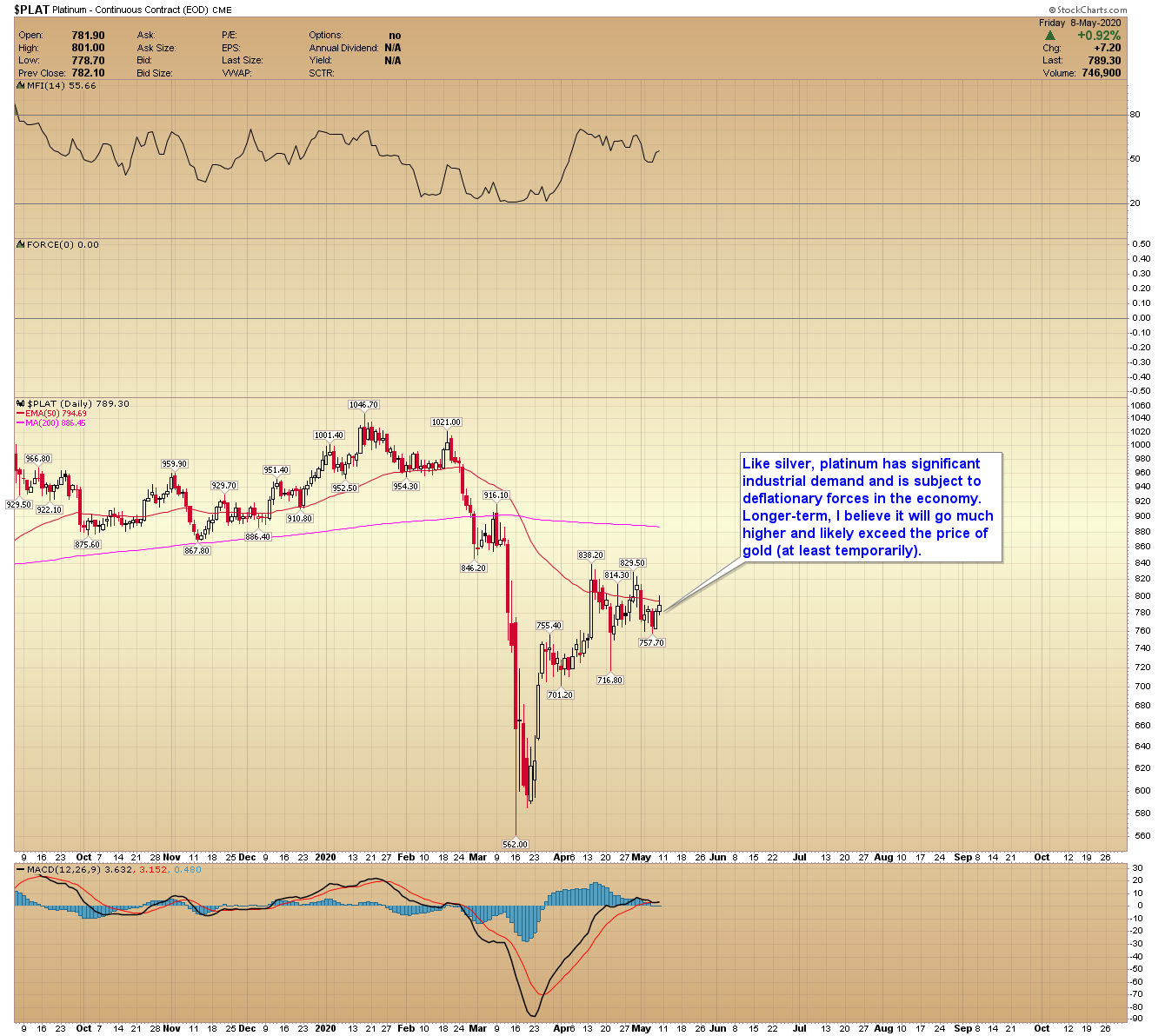 -GDX- Miners are maintaining new highs but need a little help from gold (a breakout above $1800) if they’re to go significantly higher. Closing back below $30.50 would imply a short-term breakdown. 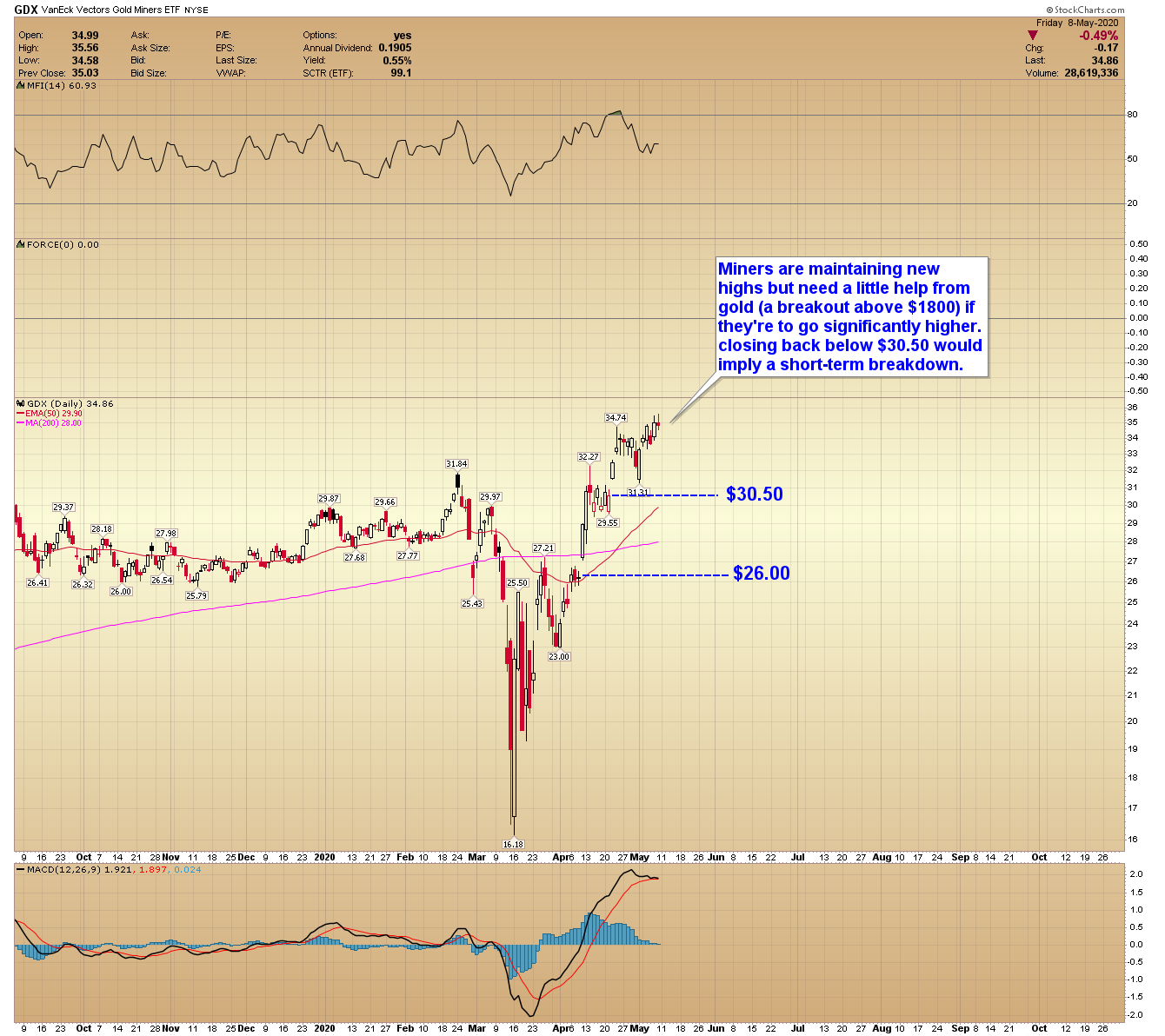 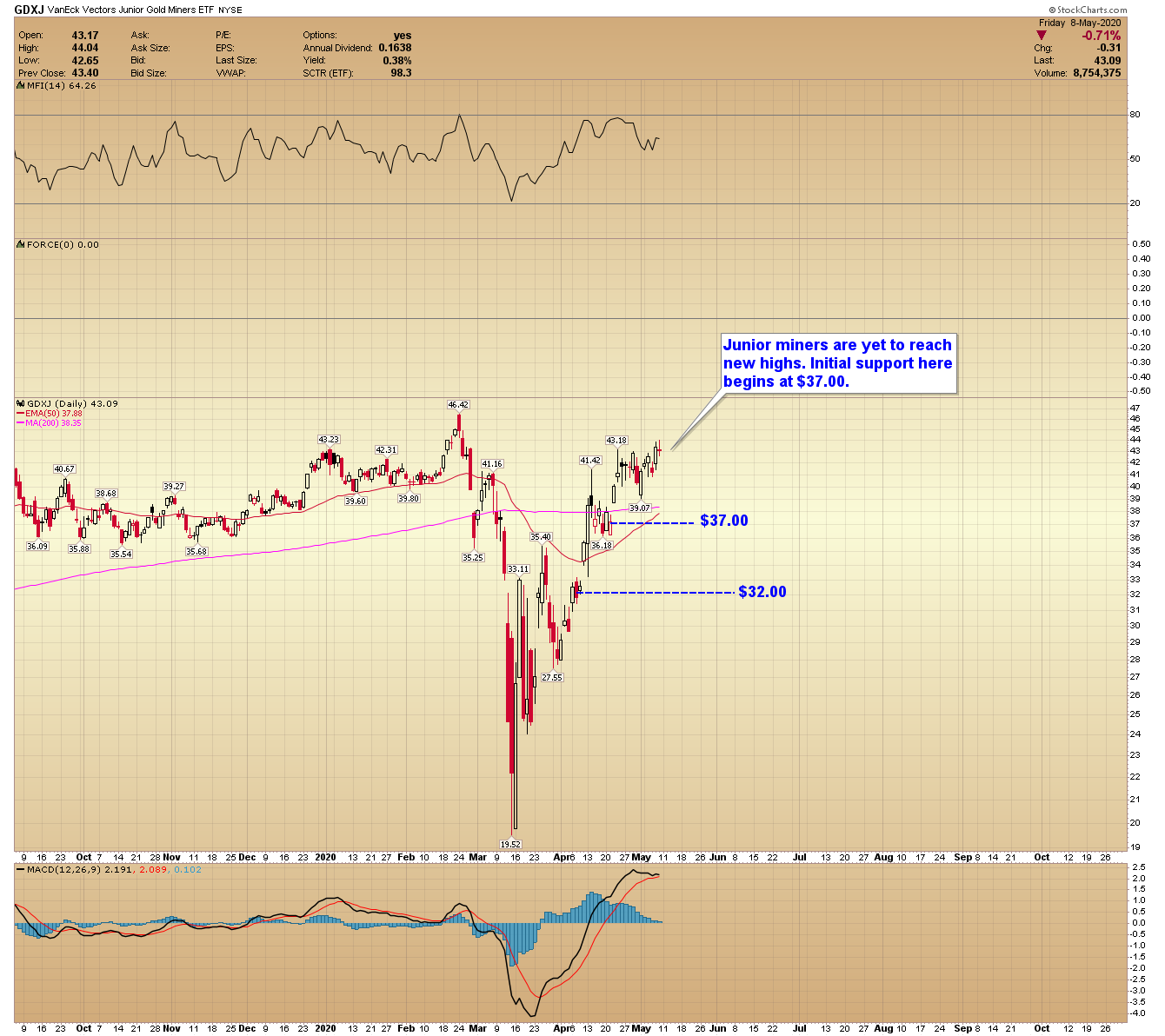 -SPY- The stock market continues to price in a V-shaped recovery, and with over 33-million unemployed since March, I don’t see that happening. I think the current rally is limited to 300 to 310. 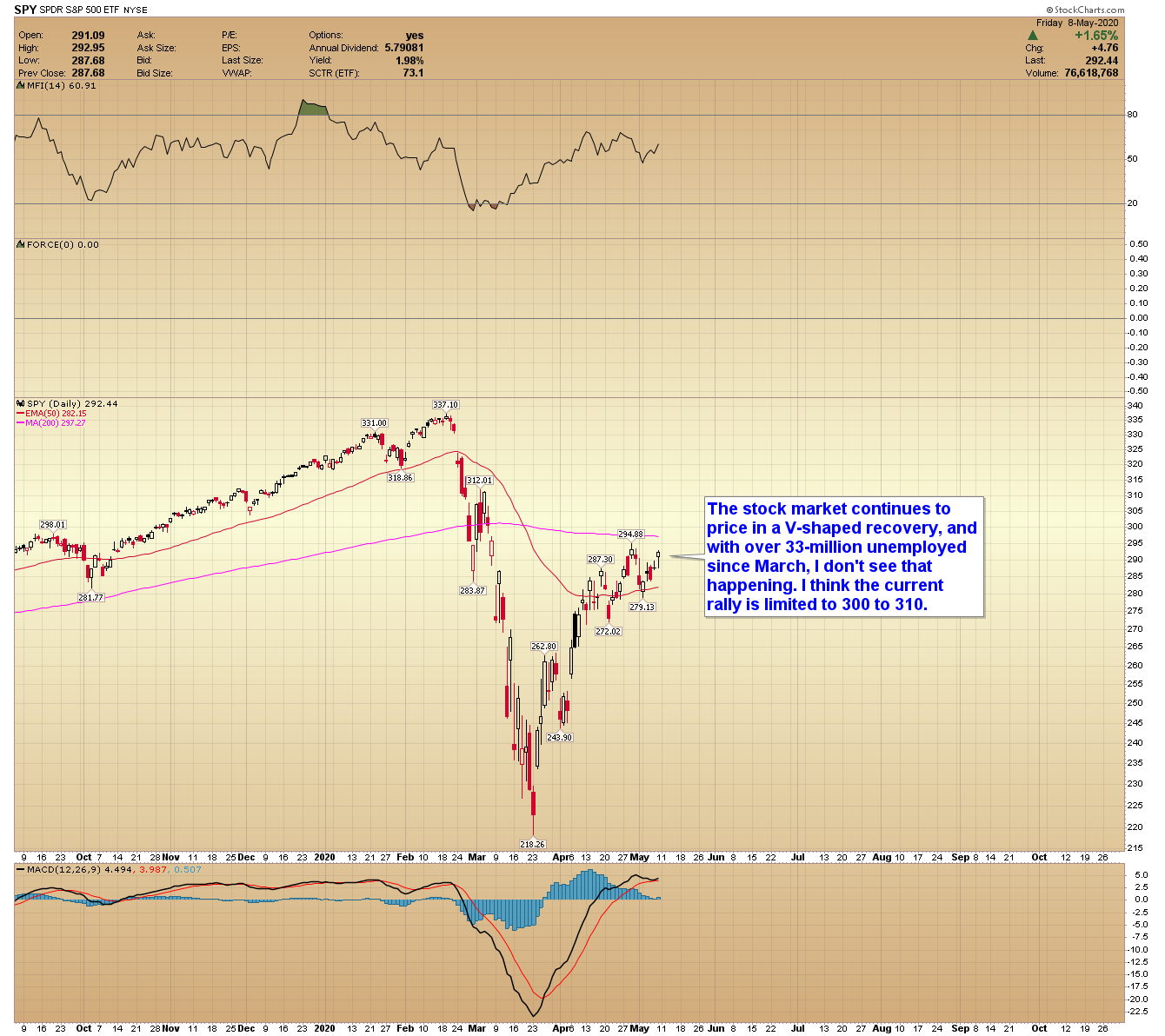 In conclusion, governments around the world have painted themselves into a corner. The only way out is to devalue their currencies or outright default. In my opinion, this guarantees much higher gold prices.

Too often, we are focused on what’s going to happen next week or next month. Forget about that! Short and medium-term trading is too unpredictable. Please consider a long-term approach.

Happy Mother’s Day and be safe.

This article was published Posted on May 10, 2020 in Categories Free Updates, Weekend Newsletters