I think metals and miners are approaching a cycle top. Silver has been leading gold higher, and that often happens at the end of an intermediate-term advance.

With the stock market’s rebounding, fear and panic have waned. Demand for physical bullion (gold and silver coins) has collapsed 90% from the March and April rush. Because demand for physical has plummeted, I think a breakout in gold (above $1800) and silver (above $21.23) is unlikely at this time – which is fine with me and will allow more time to accumulate.

Premiums remain astronomical, especially on silver eagles. One of my go-to sites APMEX, is charging $10.99 per coin over spot. That is absurd. Premiums should return to normal over the next few months.

Note, this is one of the reasons I like quality bullion as a long-term investment. Towards the end of the bull market, I think premiums could double, or triple spot price as quality bullion products become scarce.

The gold cycle indicator finished the week at 368, and we are in an area where I’m looking for a cycle top.

-US DOLLAR- The Dollar has broken down from the triangle consolidation, and prices are testing the 200-day MA. Longer-term, all this money printing should lead to much lower dollar prices. But in the meantime, we could see the Dollar rise as Europe implodes. 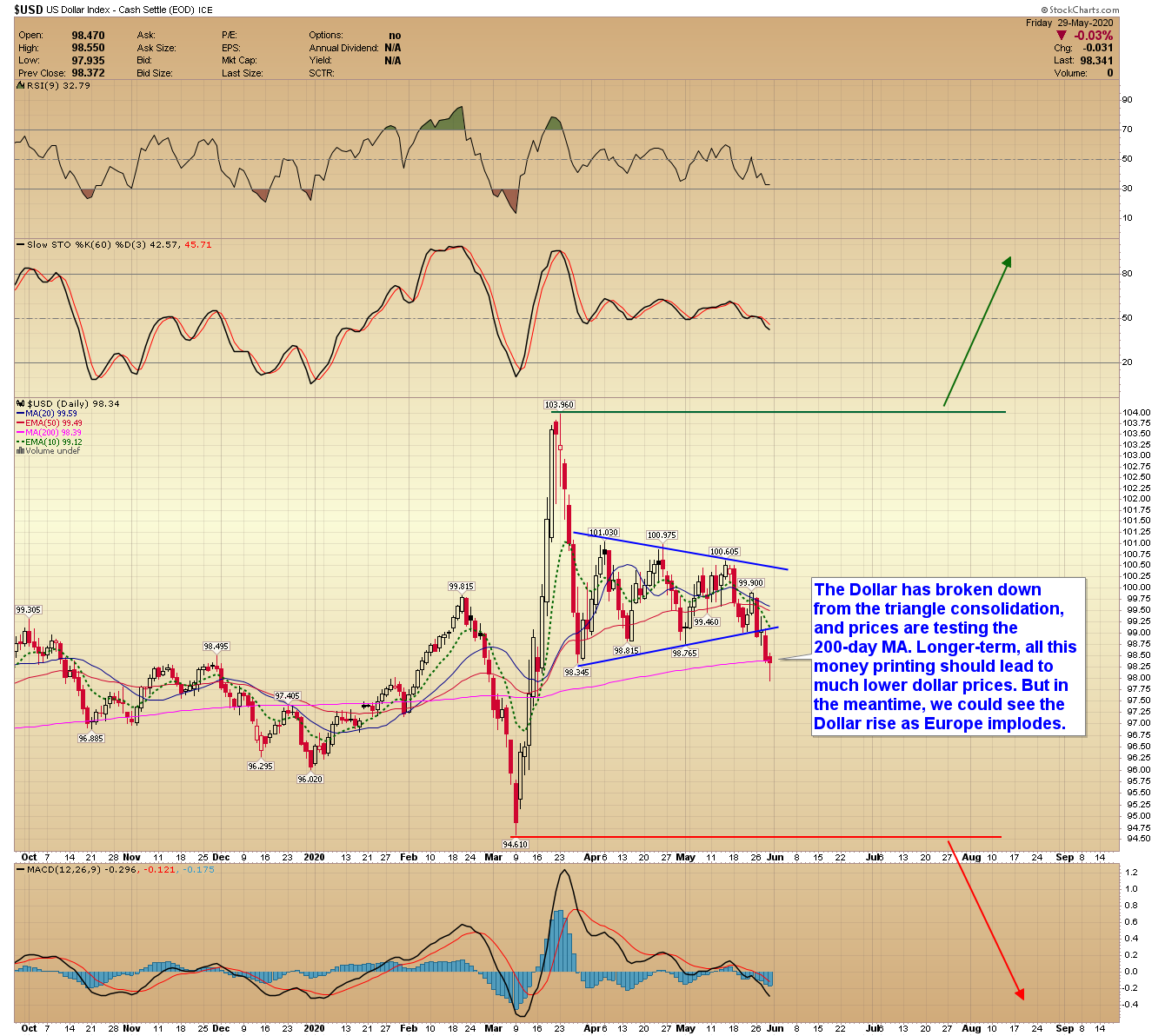 -GOLD- Our cycle work continues to look for a potential turning point at the end of May or the first week of June. It’s possible gold will rally and test $1800 next week. We could see a high at that time if gold fails to break decisively above $1800. Technically speaking, gold is stuck in a consolidation, which could lead to a breakdown in June or July. 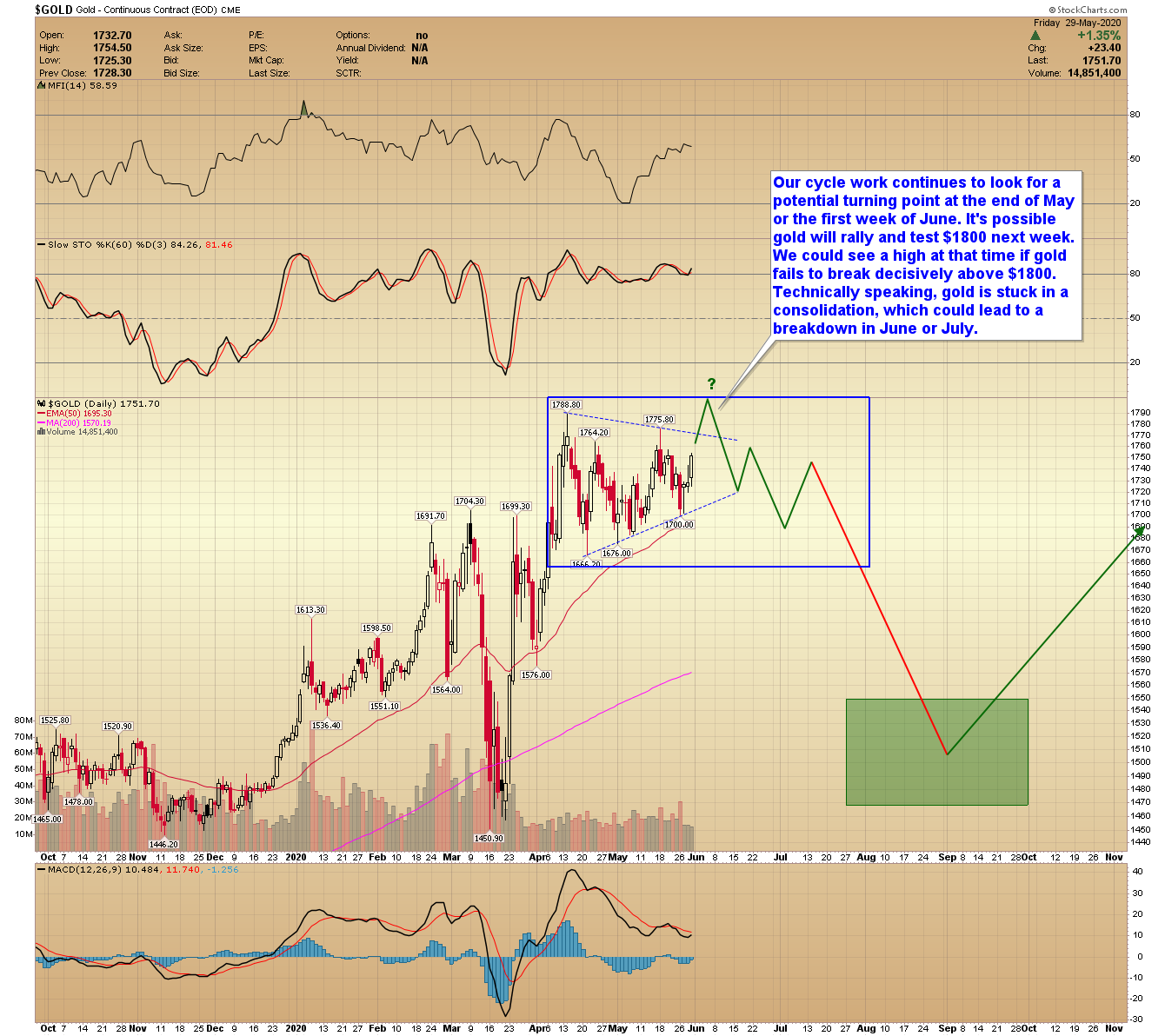 -SILVER- Silver tends to outpace gold towards the end of an intermediate-term advance. We could see one more push into the target box before prices peak. It would take a sustained breakout above the $21.23 high set in 2016 to establish a bullish breakout in silver. I’m guessing prices will peak near the target box and then begin work their way back towards $14.00 – $15.00 and into the next 6-month low. 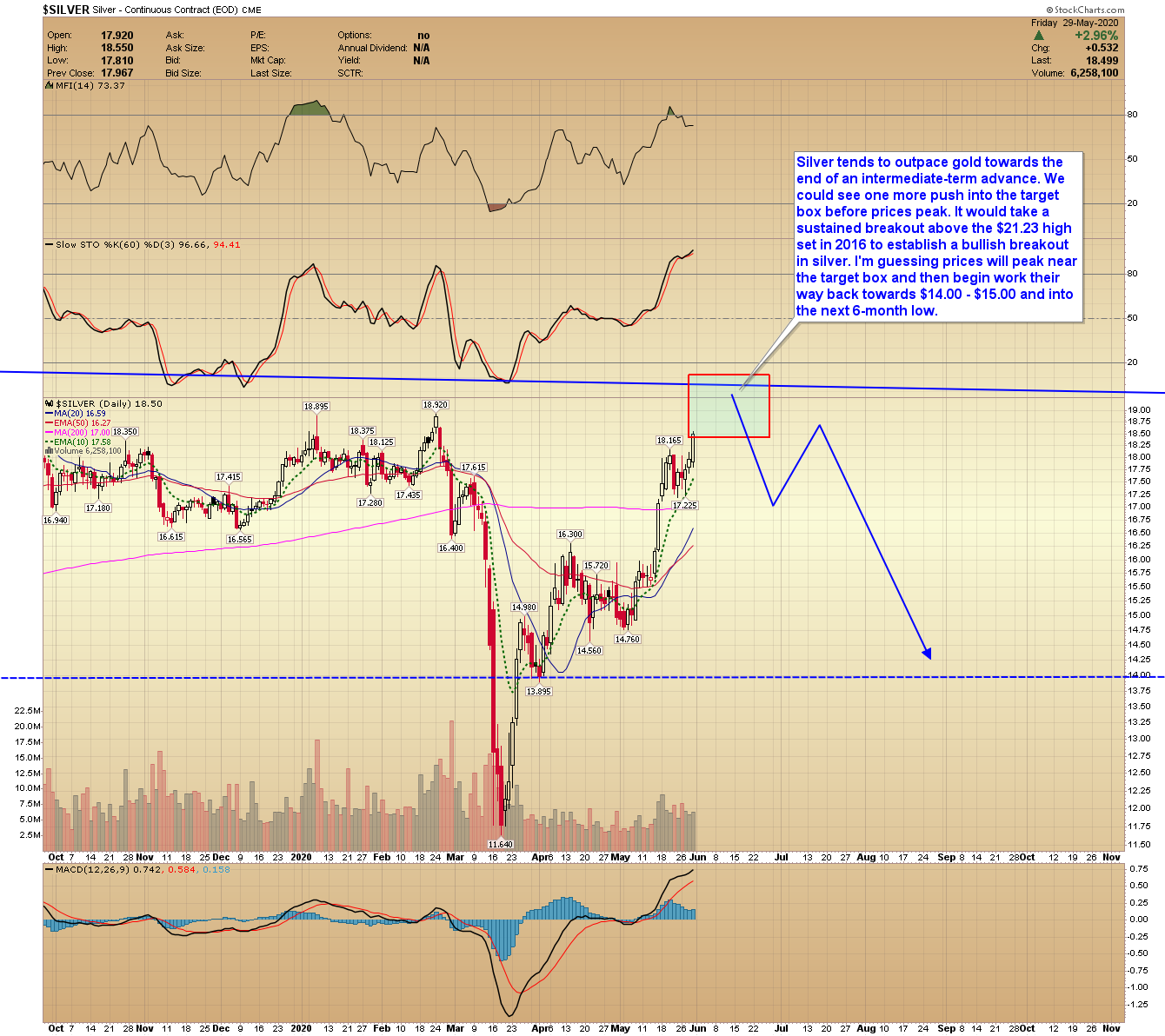 -PLATINUM- Platinum continues to consolidate just below the 200-day MA. We could see one more push towards the $1000 level before this cycle peaks. It would take a sustained rise above $1050 to support a bullish breakout. 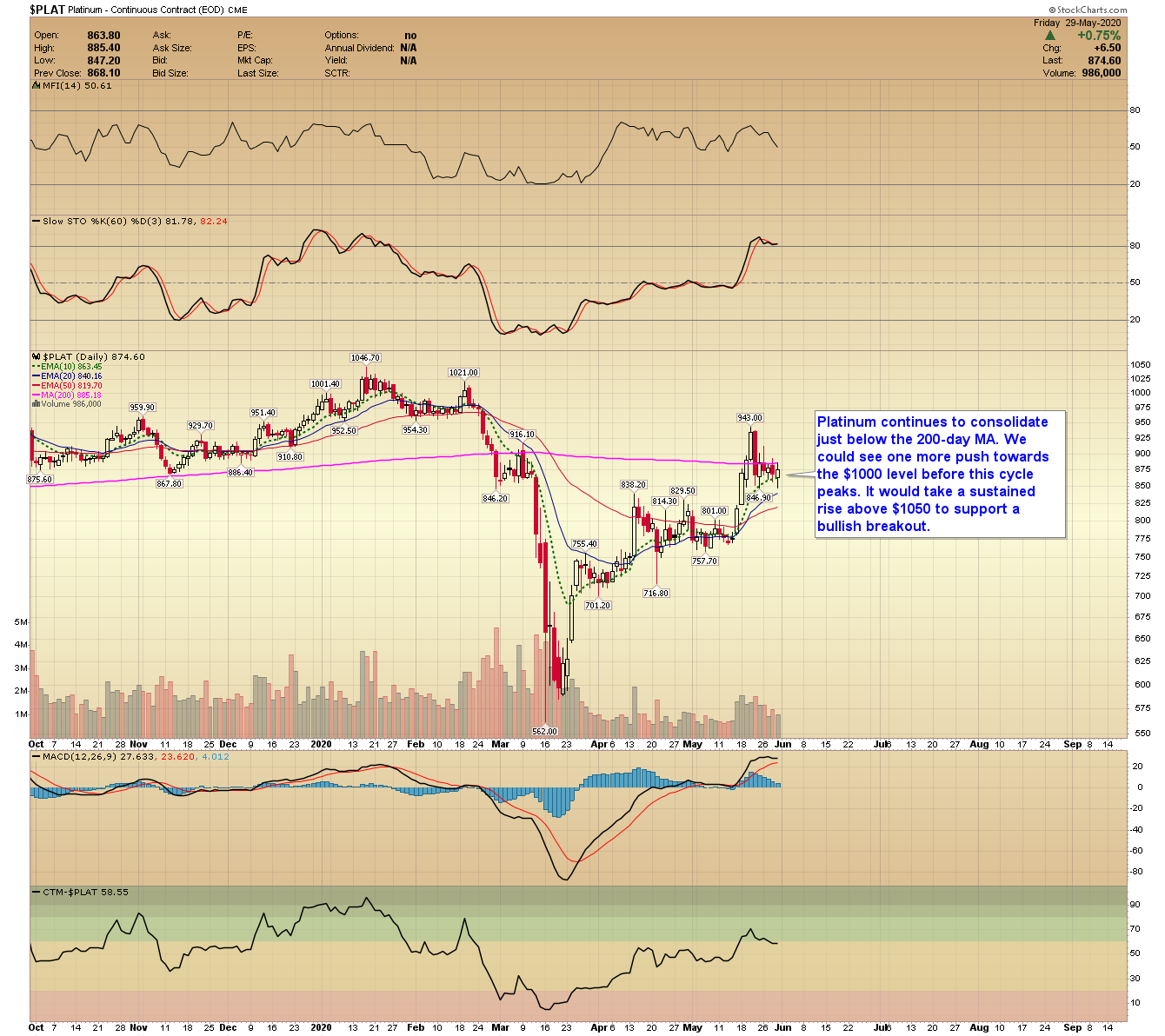 -GDX- Miners are beginning to show signs of weakness compared to gold, suggesting prices may already be correcting. Gold would have to break decisively above $1800 to prevent a more extensive correction. The next level of support arrives around $30.00, below that, $26.00. 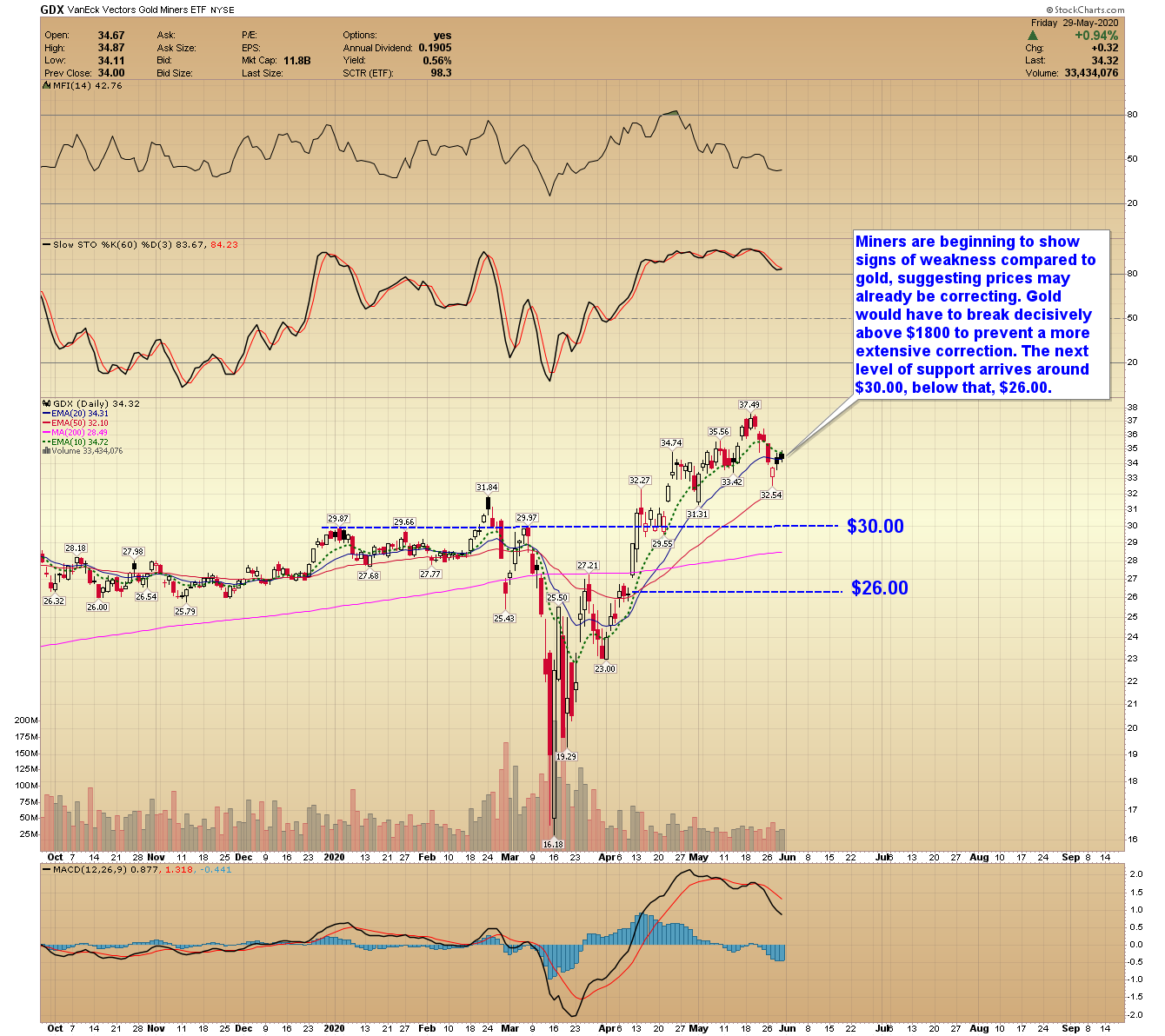 -GDXJ- Juniors are holding up a little better than GDX due to the current strength in silver. That could end next week if silver peaks as I suspect. 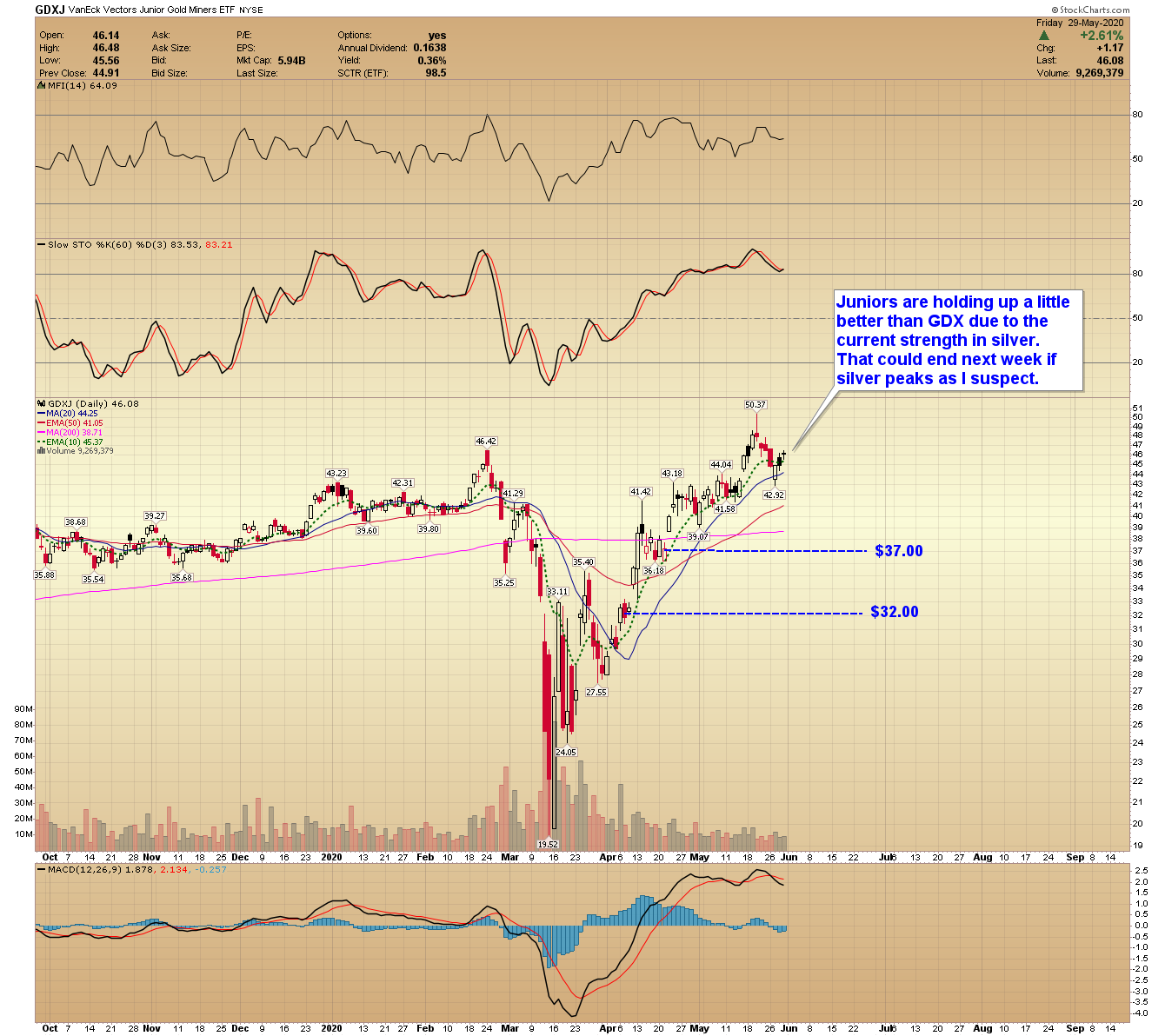 -SPY- In my opinion, the stock market does not reflect the true state of the economy. Prices are down just 10% from the February high, likely driven by massive amounts of liquidity from the Fed. As the saying goes, don’t fight the Fed – this is a prime example. Eventually, the stimulus will wear off, and reality will set in. There has been massive destruction to the economy, and it will take years to recover fully. 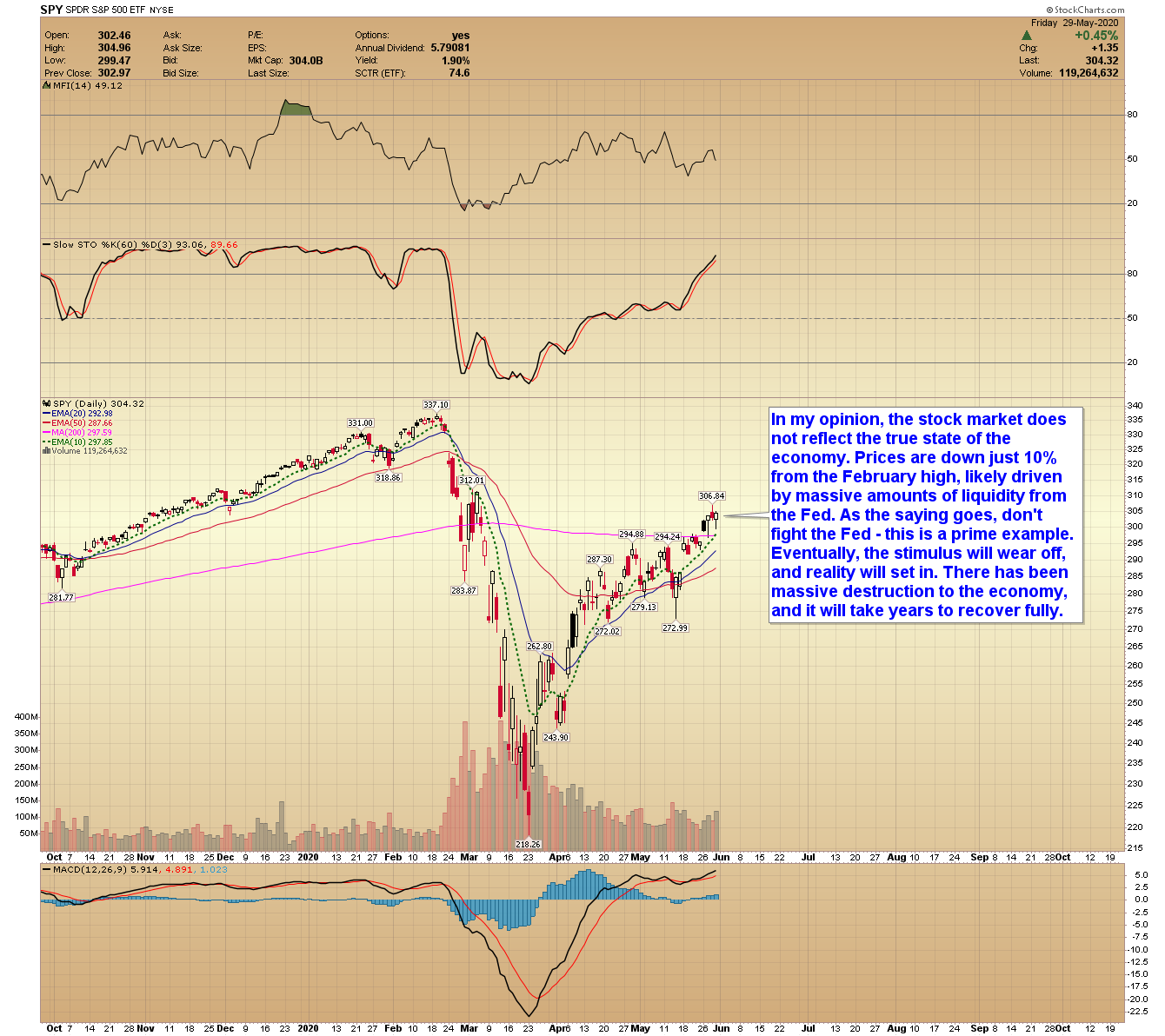 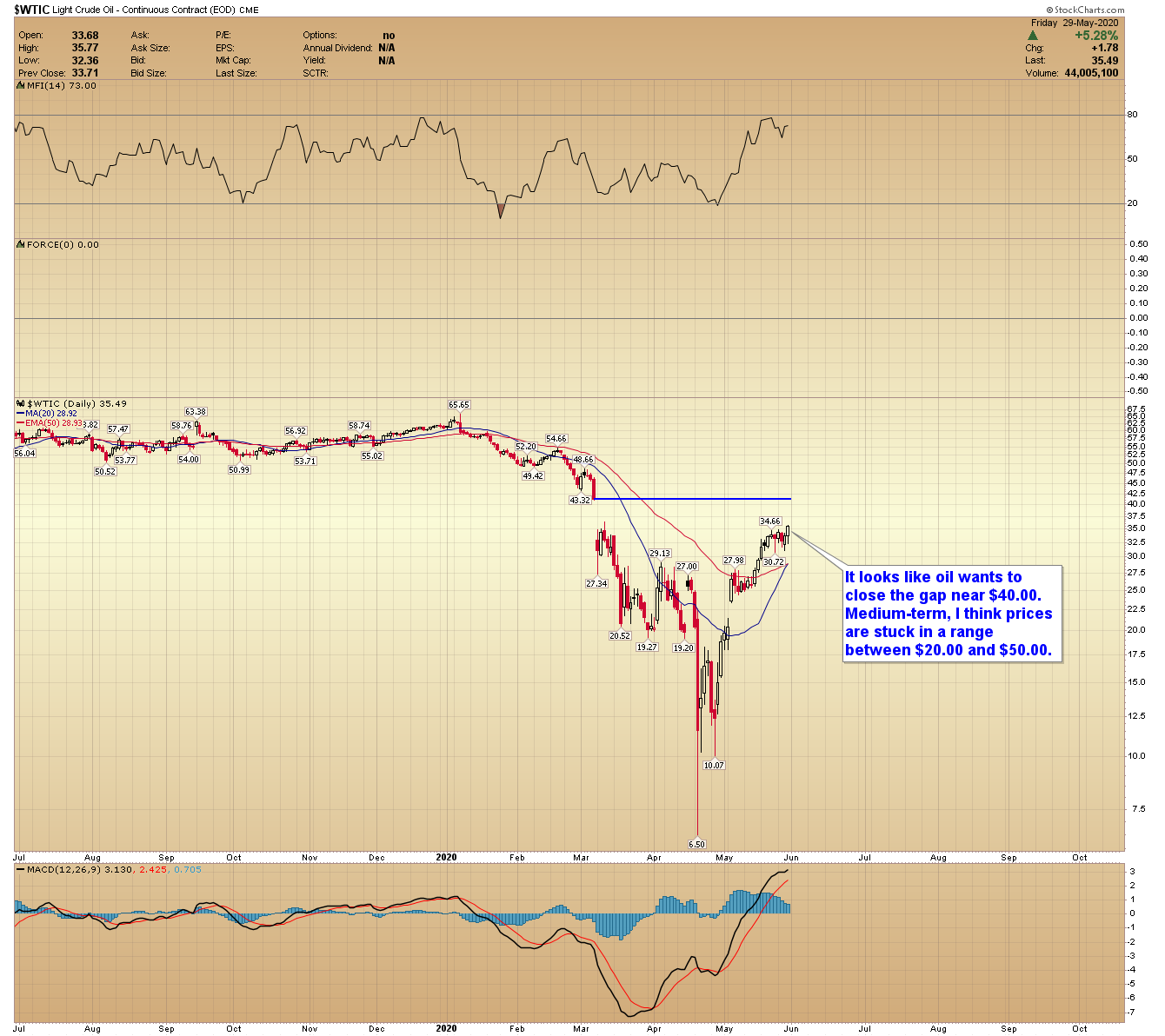 This article was published Posted on May 31, 2020 in Categories Free Updates, Weekend Newsletters