Gold prices are within striking distance of the all-time high set in 2011 ($1923). In my opinion, it would be unusual for prices to breakout to new all-time highs on the first try (typically there is a prolonged consolidation). Consequently, I still think prices could peak and begin a correction back towards $1550.

Note: A sustained advanced above $2000 in August would suggest the inflationary pressures are too great, and prices could persist higher into the elections.

I’m happy to report silver prices finally confirmed a new bull market and exceeded the 2016 high ($21.23). Prices reached $23.67 intraweek, and I think they could touch $26.00 before the trend takes a breather.

Platinum is yet to take out its 2016 high ($1199.50), but that could change in the coming days/weeks. If speculators begin to pile in, I see the potential for an explosive rally higher (like silver).

The US dollar is at critical trendline support. If it stabilizes in the coming days, gold prices should begin to roll over and correct. If the dollar collapses below support, then gold could breakout above $2000 earlier than I expected.

The gold cycle indicator is at max topping (450). The cycle is extended. I continue to look for evidence of a top. 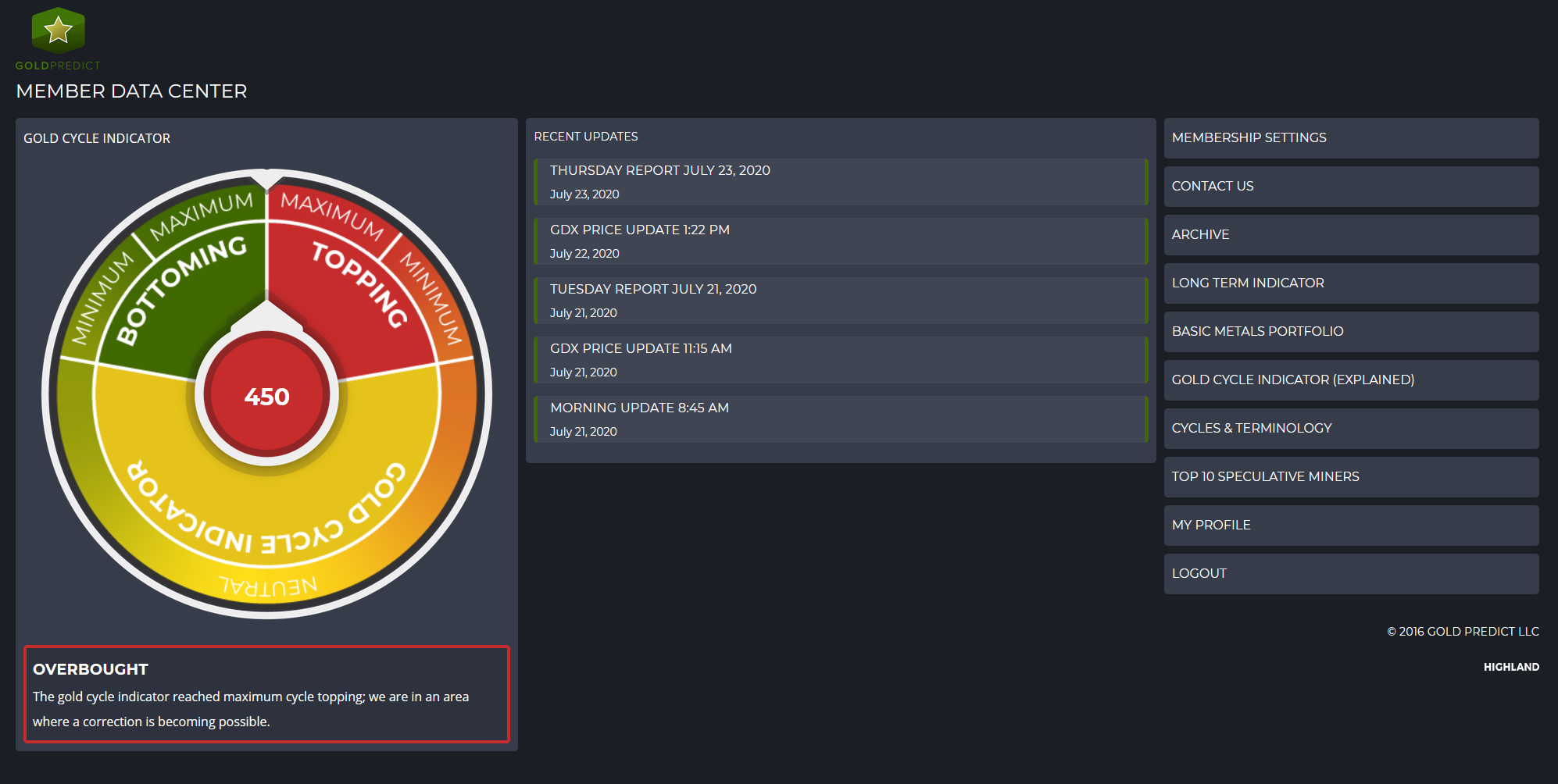 -US DOLLAR- The dollar is testing a trendline dating back to 2011. Prices need to find support above 94.00, and soon to prevent a significant breakdown. Collapsing below 92 could trigger a sharp decline. The next 3-year low is due around January 2021. 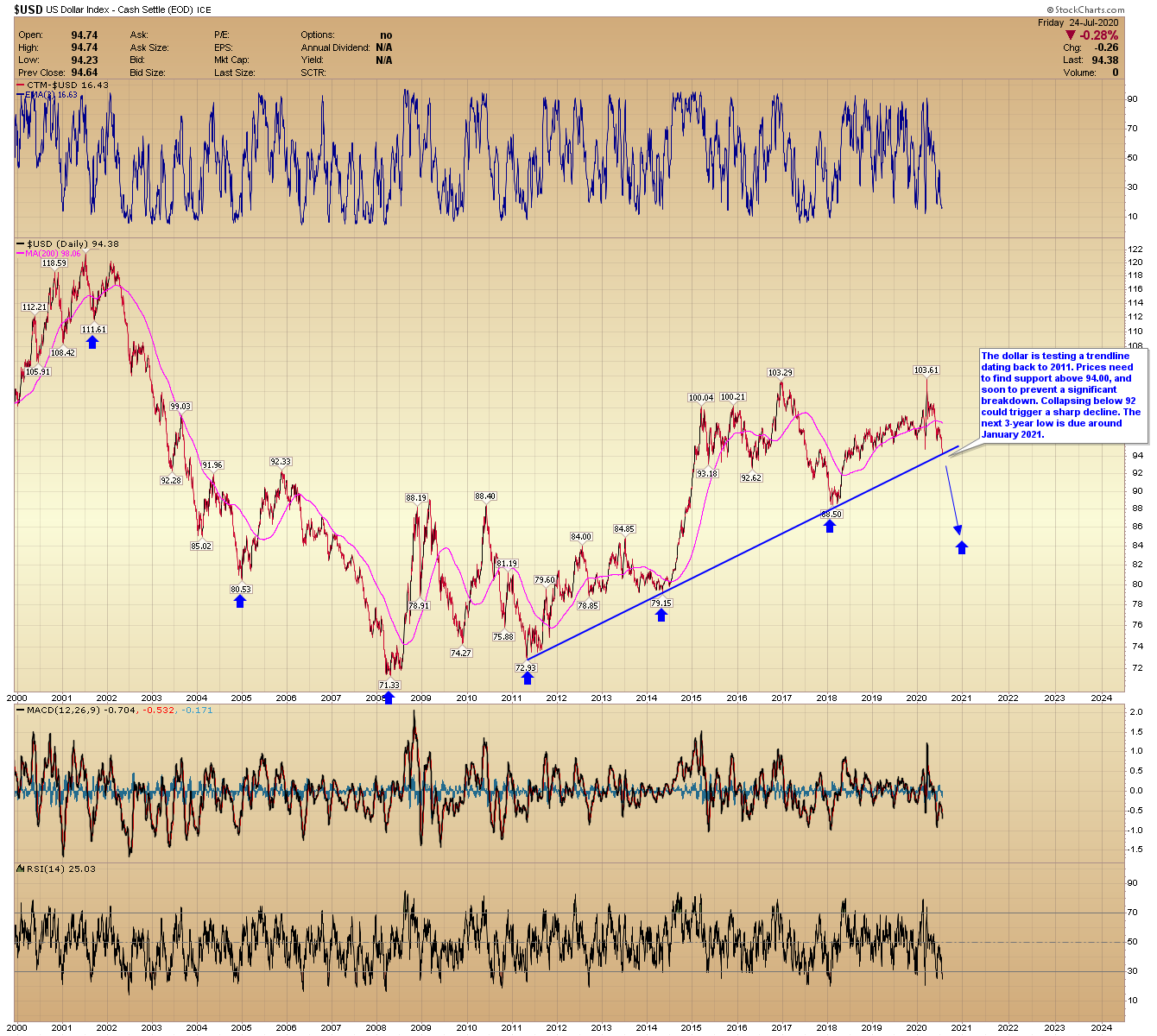 -GOLD- I have to admit; gold has rallied much higher than I initially expected. I felt prices would be contained to the $1800 level. Government stimulus was more aggressive and entered the actual economy faster than I anticipated, creating immediate asset inflation.

With our cycle indicator pegged at 450, a cycle peak remains possible any day. I continue to see the potential for a decline back towards $1550 – $1600 by September. The $2000 level is key – a sustained advance above $2000 could lead to a runaway move into the elections. 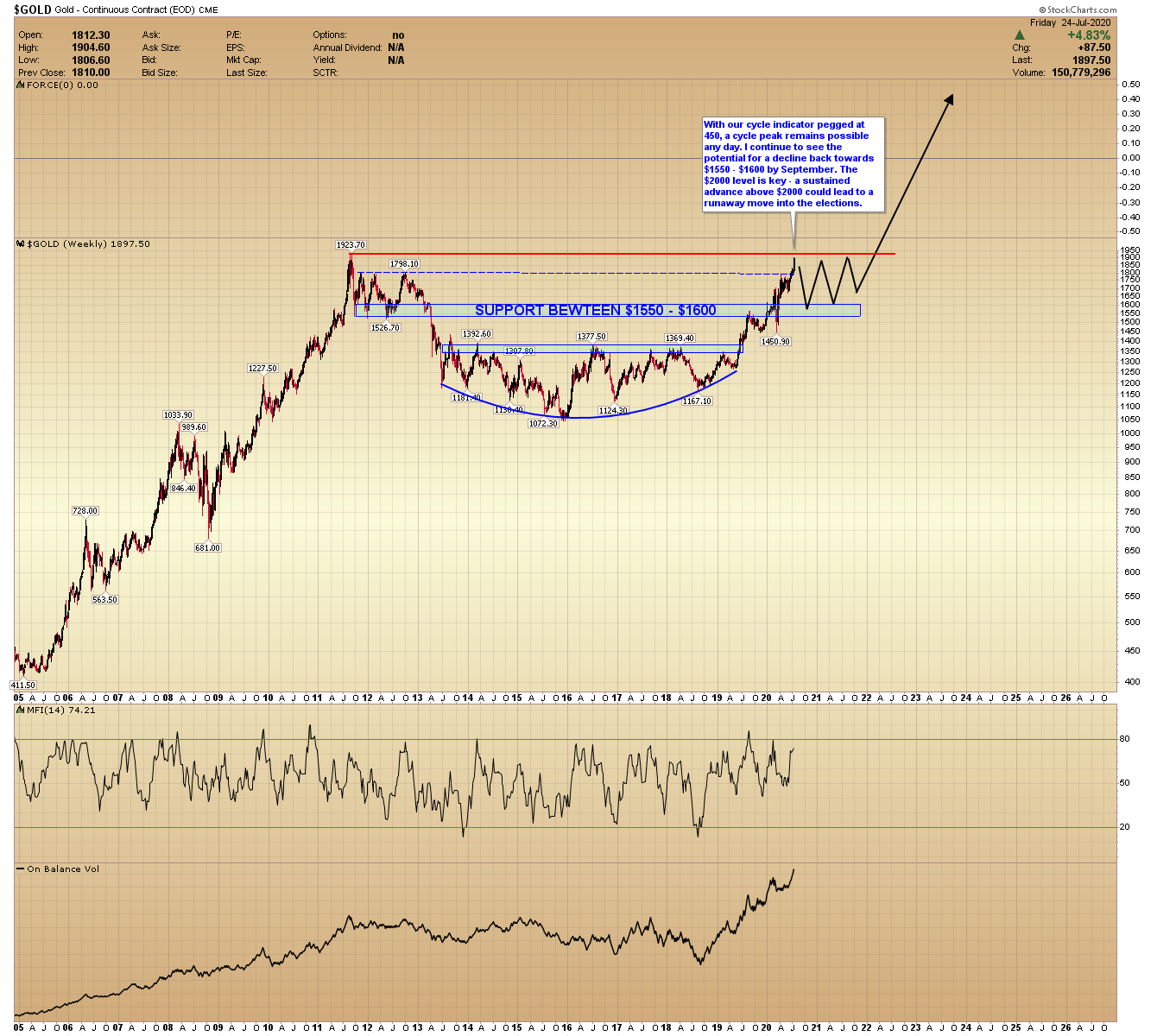 GOLD POTENTIAL TARGETS: Assuming prices consolidate below $2000, as I suspect. I think the next significant top in gold may not arrive until late 2023. That peak would trigger the next major 8-year cycle low that should come in the last half of 2024. If gold enters a bubble, I think it could reach $10,000+. 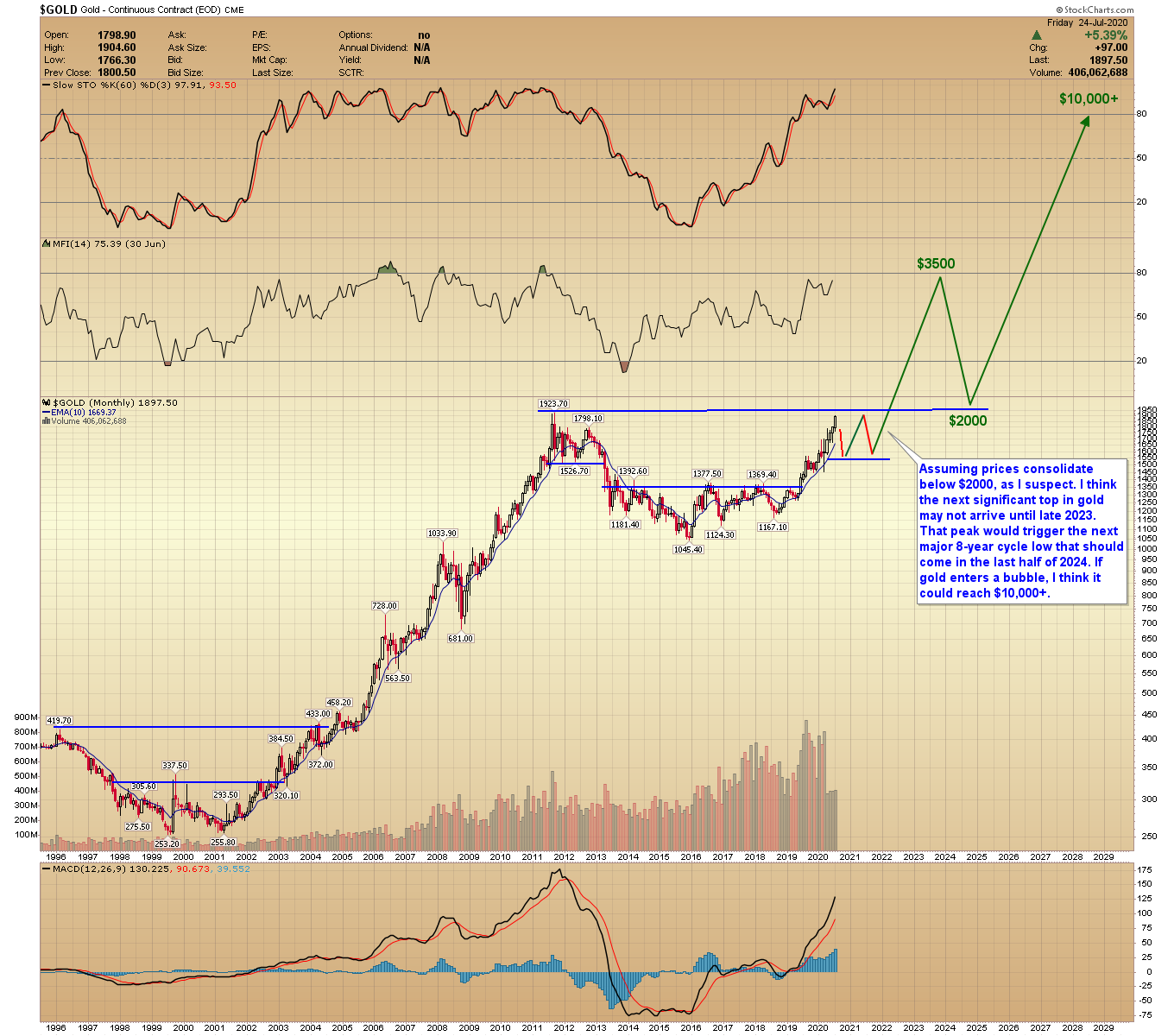 -SILVER- The most exciting news of the week was the breakout in silver. Prices finally surpassed the 2016 high ($21.23). This could extend a little higher for a test of the $26.00 area. Longer-term, I expect a breakout above $50.00, and there’s no telling how high prices could rise. 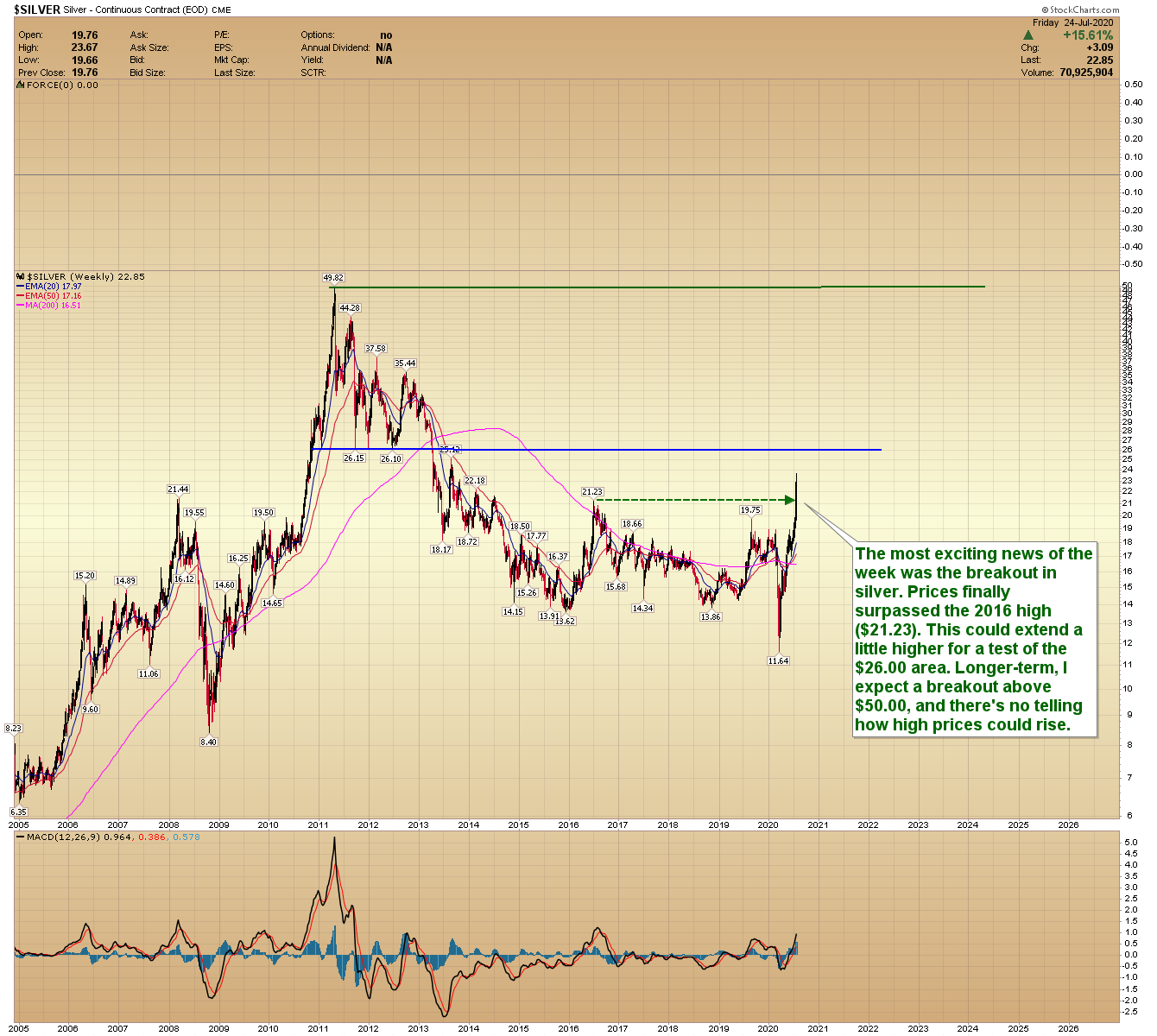 -PLATINUM- Platinum remains the laggard, but that could be temporary. The platinum market is small, and prices can move sharply in either direction. With gold and silver rocketing higher, speculators might turn their focus to platinum next, which remains below $1000 and just half the price of gold. To get the speculative juices flowing, we need a rally above $1050 and then above the 2016 high of $1199.50. Longer-term, I expect platinum to reach parity and perhaps surpass or even double the price of gold. 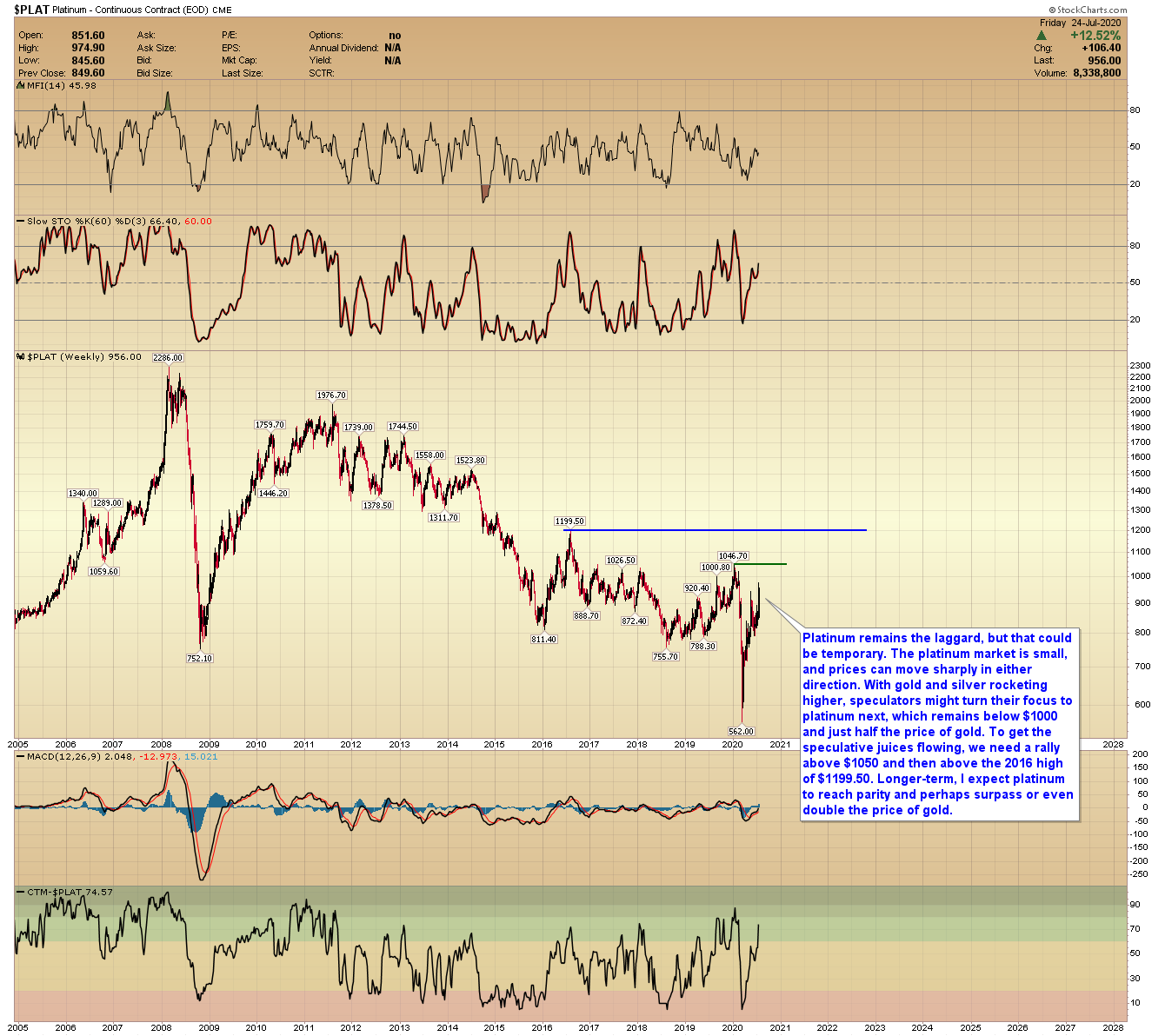 -PALLADIUM- The cycles in the Palladium are peculiar. Prices tend to lead a bull market in precious metals but peak relatively quickly. If this series peaked at $2789.80, we could see a collapse back towards $500. A rally above $3200 would support more upside. 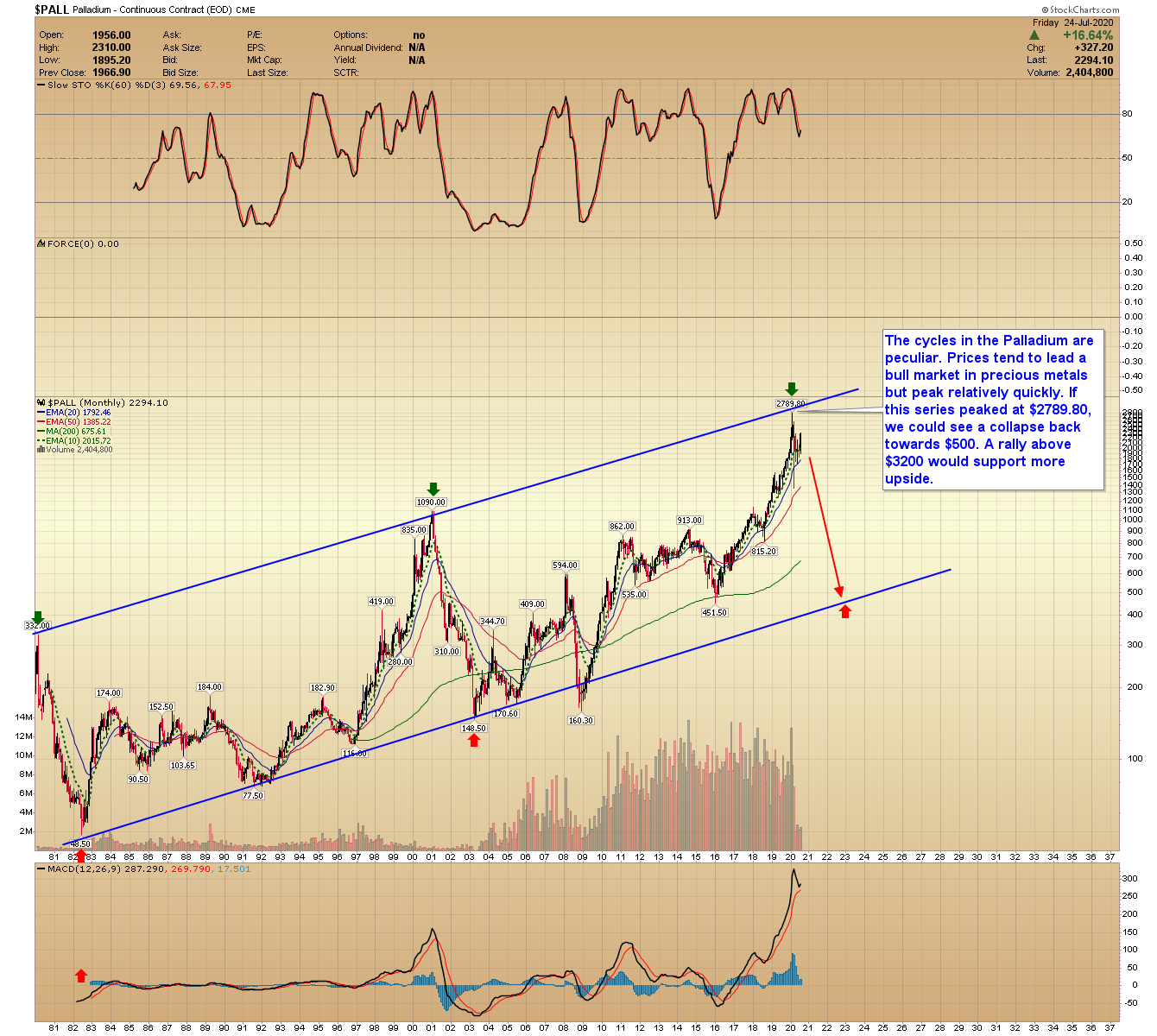 -GDX- Miners had a good week but underperformed gold on a beta adjusted basis. Maybe they were just sluggish before reporting earnings, hard to say. Nevertheless, a daily finish below $39.30 would support a cycle top. 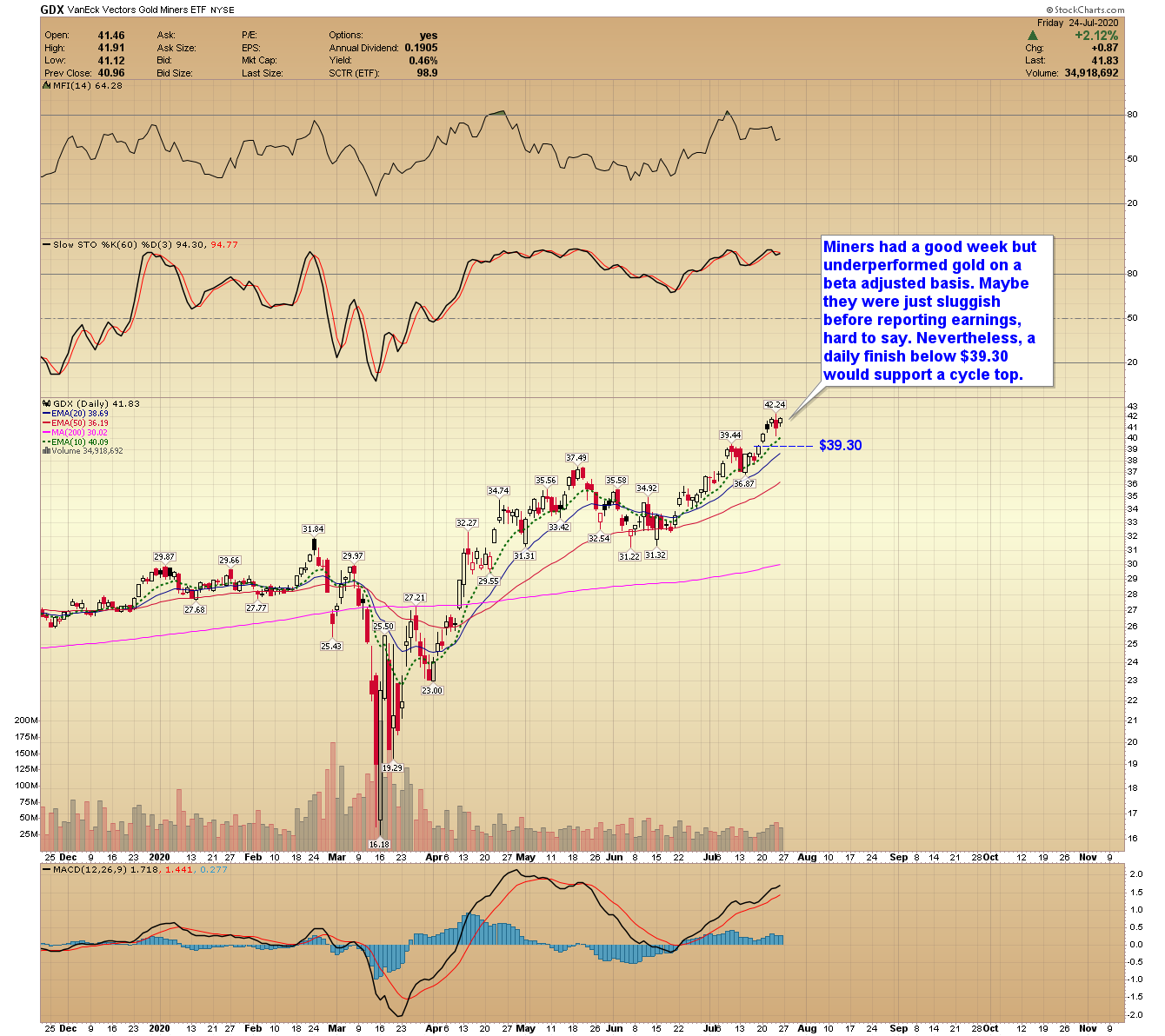 -GDXJ- I’m surprised juniors weren’t much higher given the explosive breakout in silver. Silver (SLV) finished the week 17.7% higher, whereas GDXJ finished up just 7.9%. I view this as a red flag if not corrected quickly. 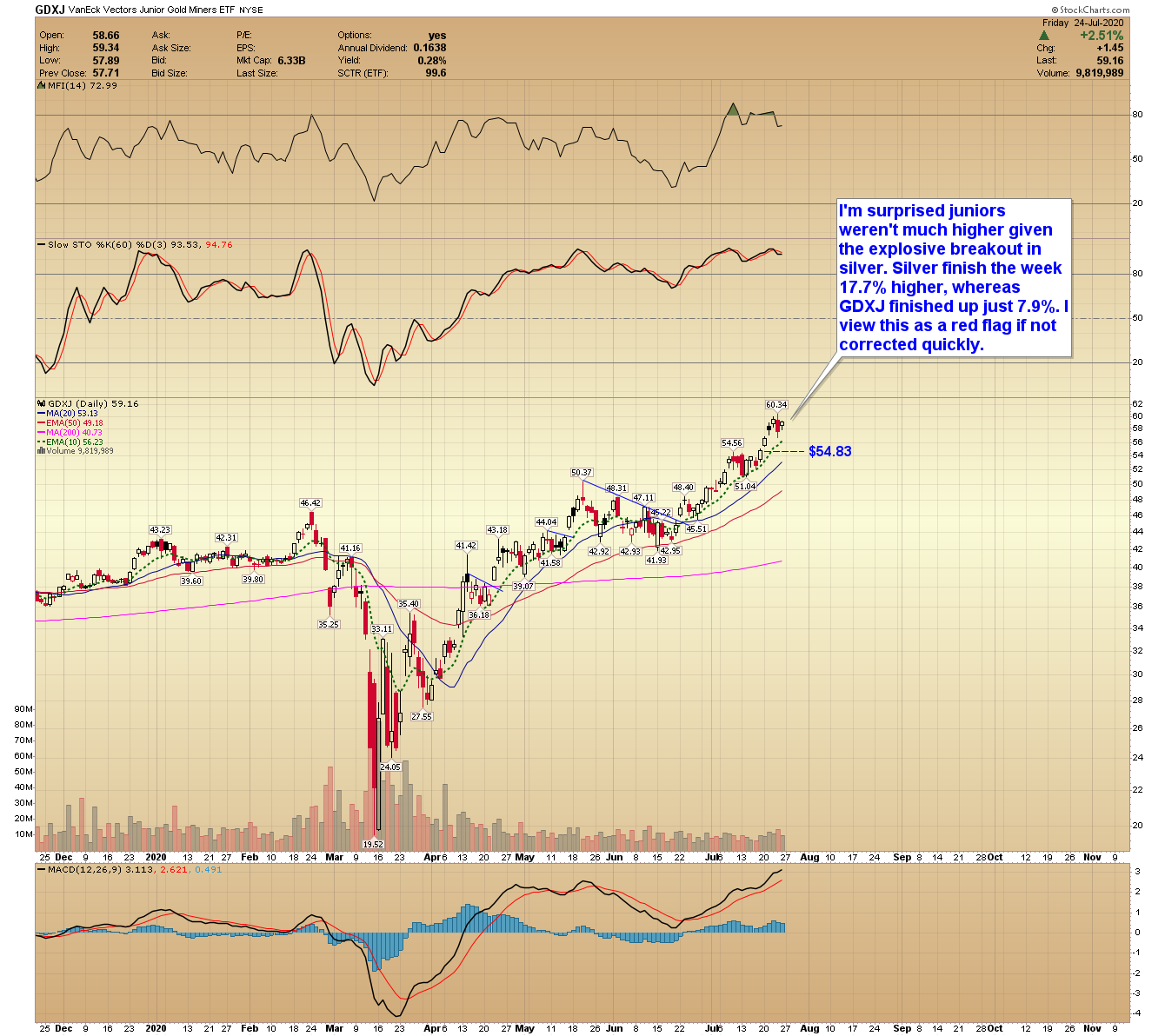 Note: Miners underperformed the metals last week, indicating a potential bearish divergence. If this divergence continues after companies report earnings, then a top is becoming likely.

-SPY- Stocks finished lower but remain within striking distance of the February gap near 329. Sooner or later, we should get a pullback with a corrective target between 285 and 290. 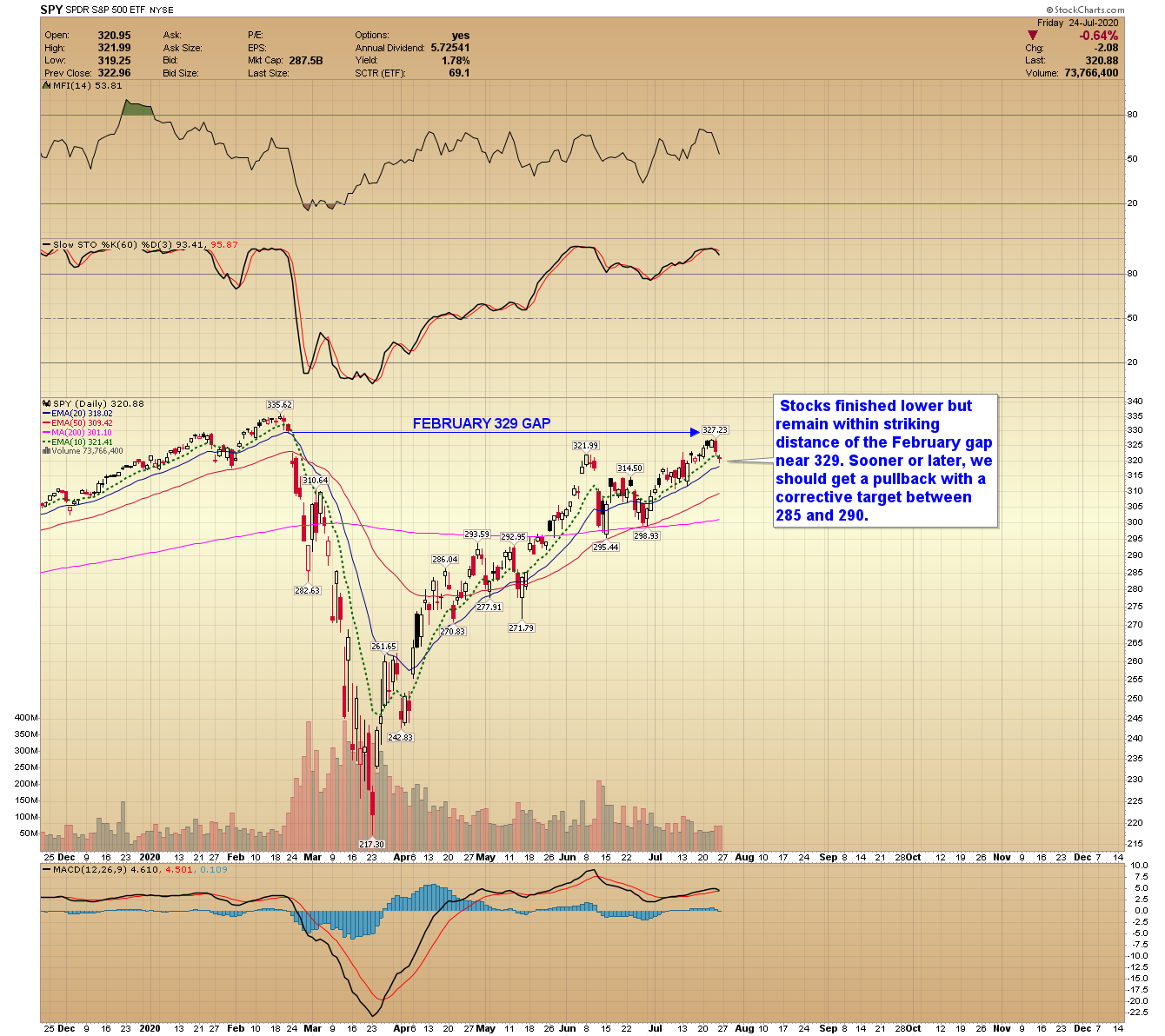 This article was published Posted on July 26, 2020 in Categories Free Updates, Weekend Newsletters