Gold prices are rolling over, and I see the potential for a bearish breakdown as soon as next week.

If gold breaks below $1850 sooner than later, that could open the door for an extended correction into December.

I do not mean to come across as overly bearish, but the post-election weakness in gold has me concerned. In fact, it is very similar to what we saw in 2016. Patterns do not always repeat, but it would be careless of me not to mention this possibility. The $1850 level is crucial going into next week.

The gold cycle indicator finished the week at 106. We are very close to entering minimum cycle bottoming. 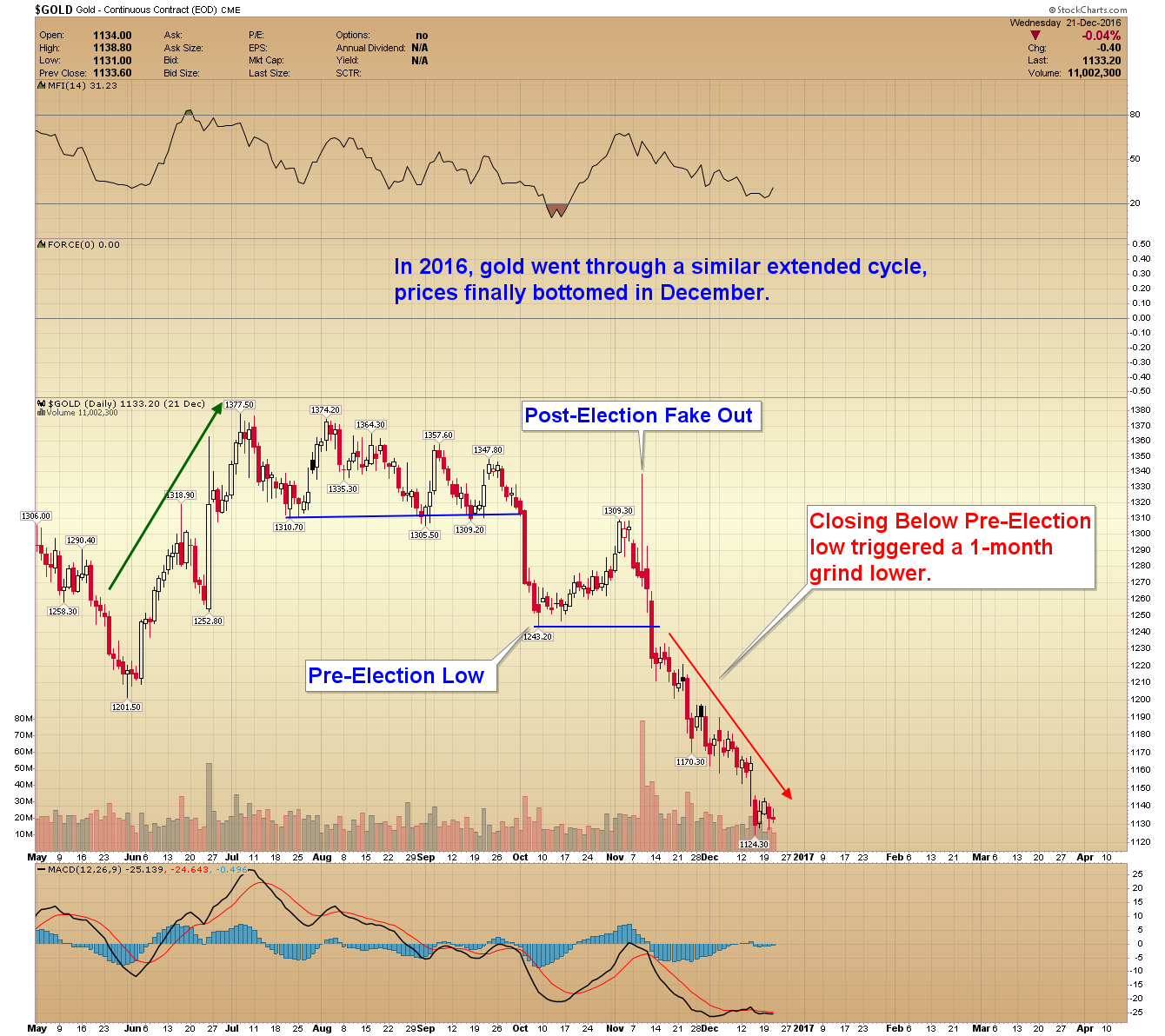 GOLD 2020: The price action in 2016 is very similar to now. If gold breaks below $1850 in the coming days, I see the potential for a deeper correction into December that tests the June low.

A sustained breakdown below $1850 could trigger a slow grind lower into December (based on the 2016 pattern). In this scenario, prices could dip briefly below $1700. 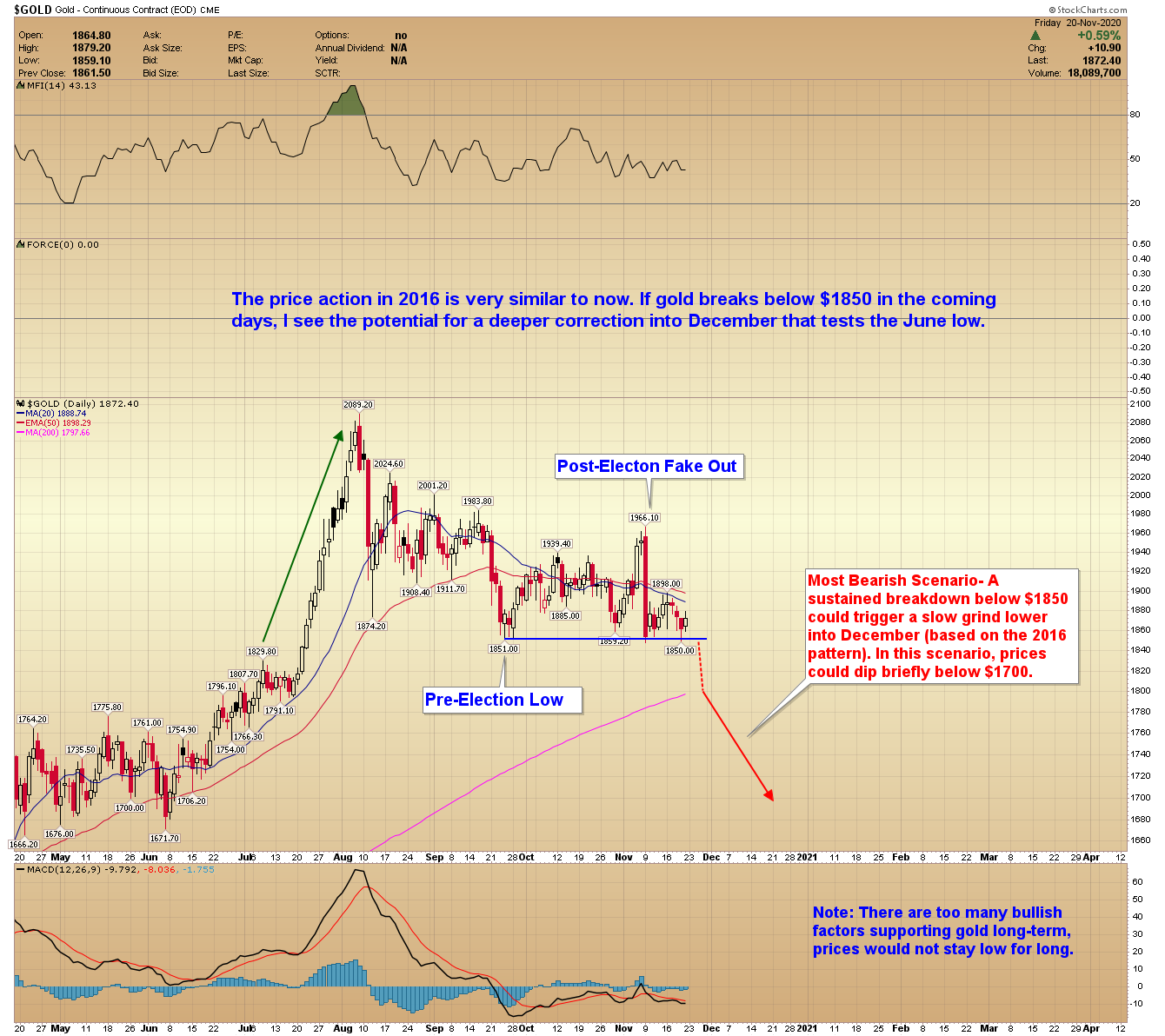 Investor Sentiment: Anybody that bought gold in August, September, October, or November is losing money. Breaking the September low ($1850) could trigger a cascade of sell orders turning bulls into bears. That would provide the bearish sentiment required for a proper 6-month low.

Money Rotation: With positive vaccine results from Pfizer and Moderna and a Democratic sweep off the table – money appears to be rotating out of gold and into undervalued sectors like energy.

Note: There are too many bullish factors supporting gold long-term. If prices do follow the more bearish scenario, they won’t stay long low for long, in my opinion.

-SILVER- A breakdown in silver below $23.00 would support the final decline to our target. If gold follows the most bearish scenario (mentioned above), silver could spike down briefly to around $18.00. 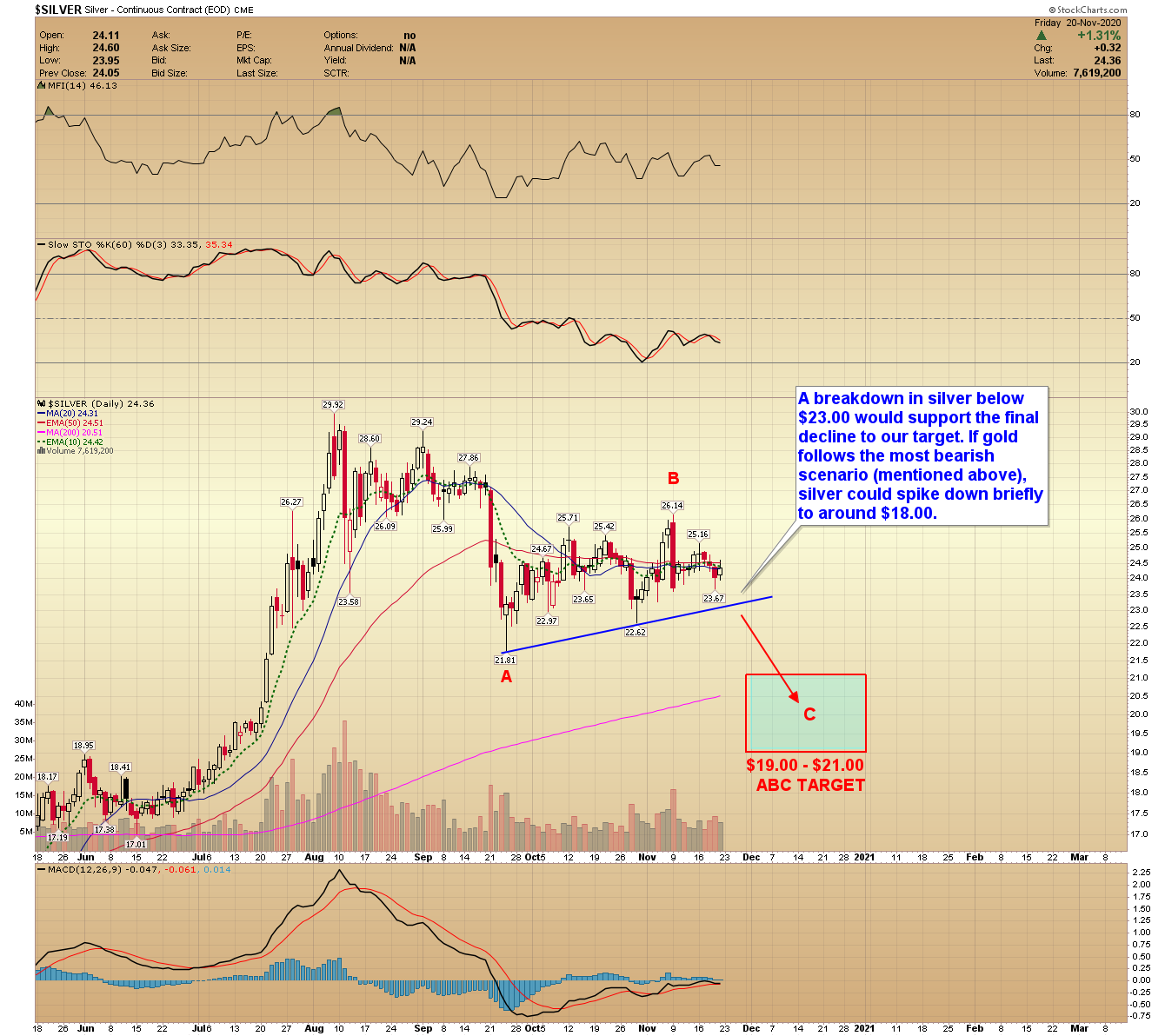 -PLATINUM- In my note to premium members on Friday, I mentioned how platinum sometimes spikes to a fresh high without gold just before it breaks lower. That could be happening again. Overall, I continue to look for a target between $750 and $800. Note – If prices continue to rise above $1050, then it’s probably going much higher. 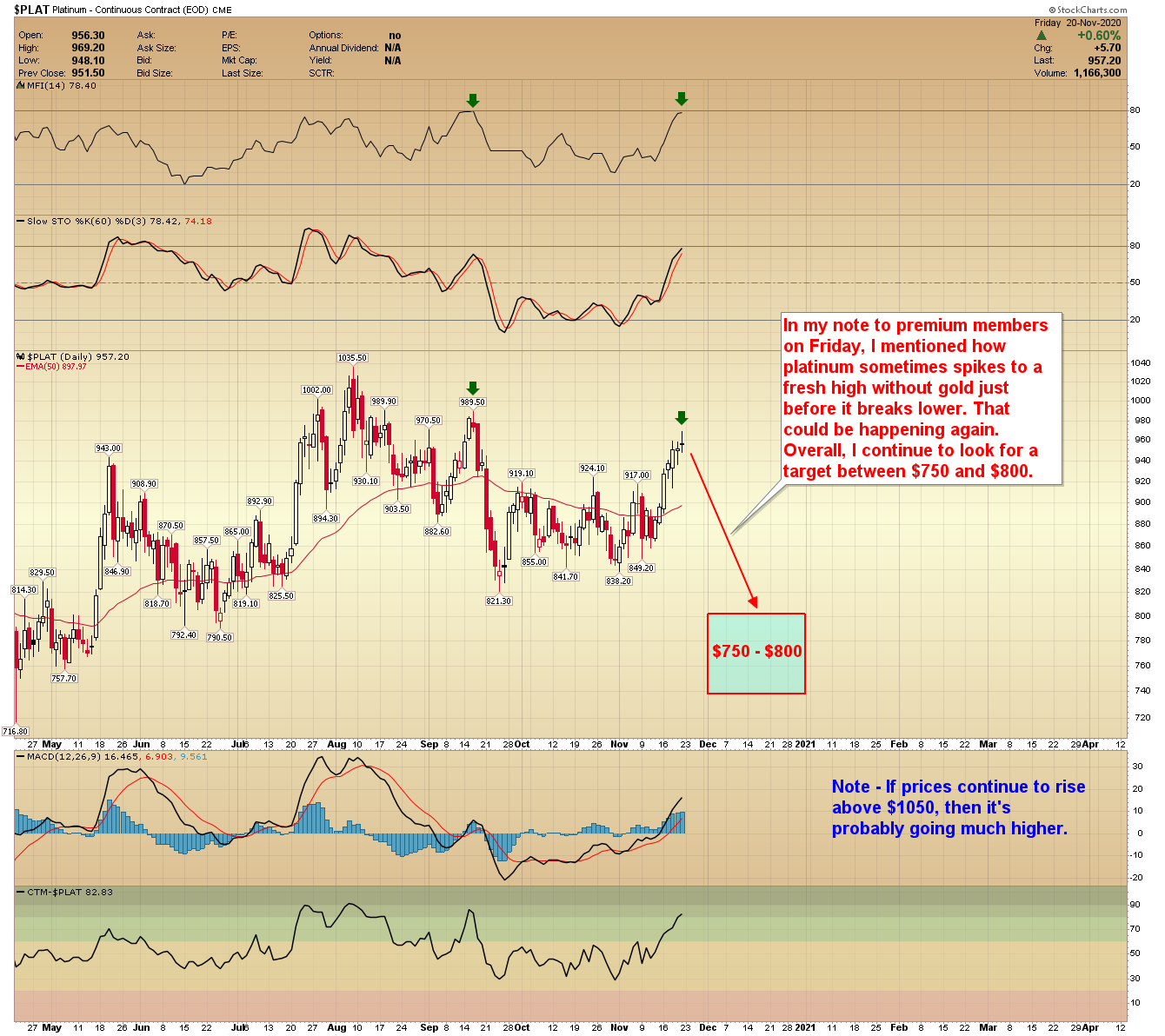 -GDX- Senior miners are leading the sector lower. If gold breaks below $1850, GDX could test the June low around $31.00 or lower before prices bottom. In my opinion, buying miners at or below the 200-day MA is a long-term buying opportunity. 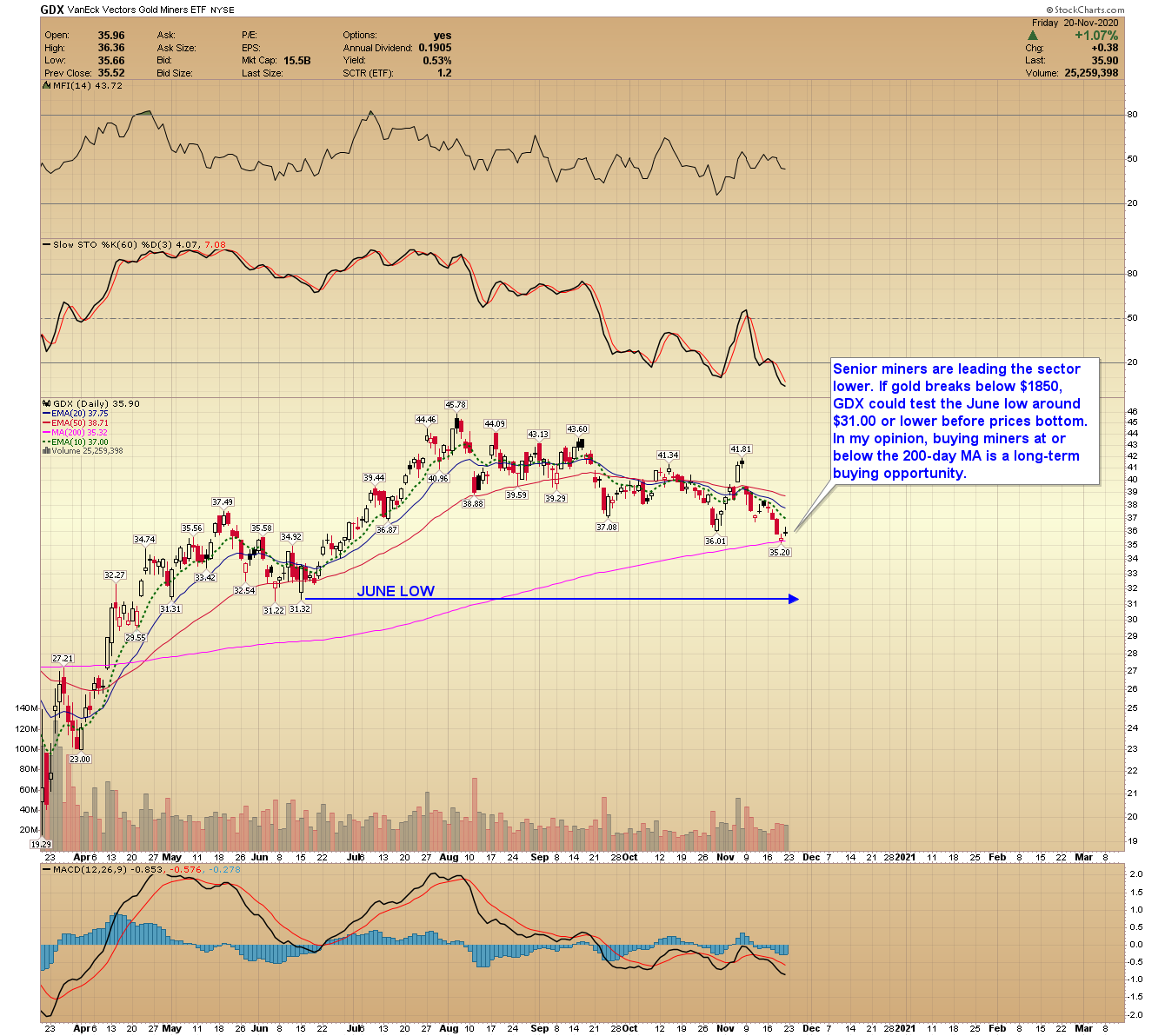 -GDXJ- Juniors struck fresh lows and are hovering just above the 200-day MA. It’s hard saying how far prices could drop if gold and silver follow the bearish scenario. A drop to $42.00 or lower is possible. 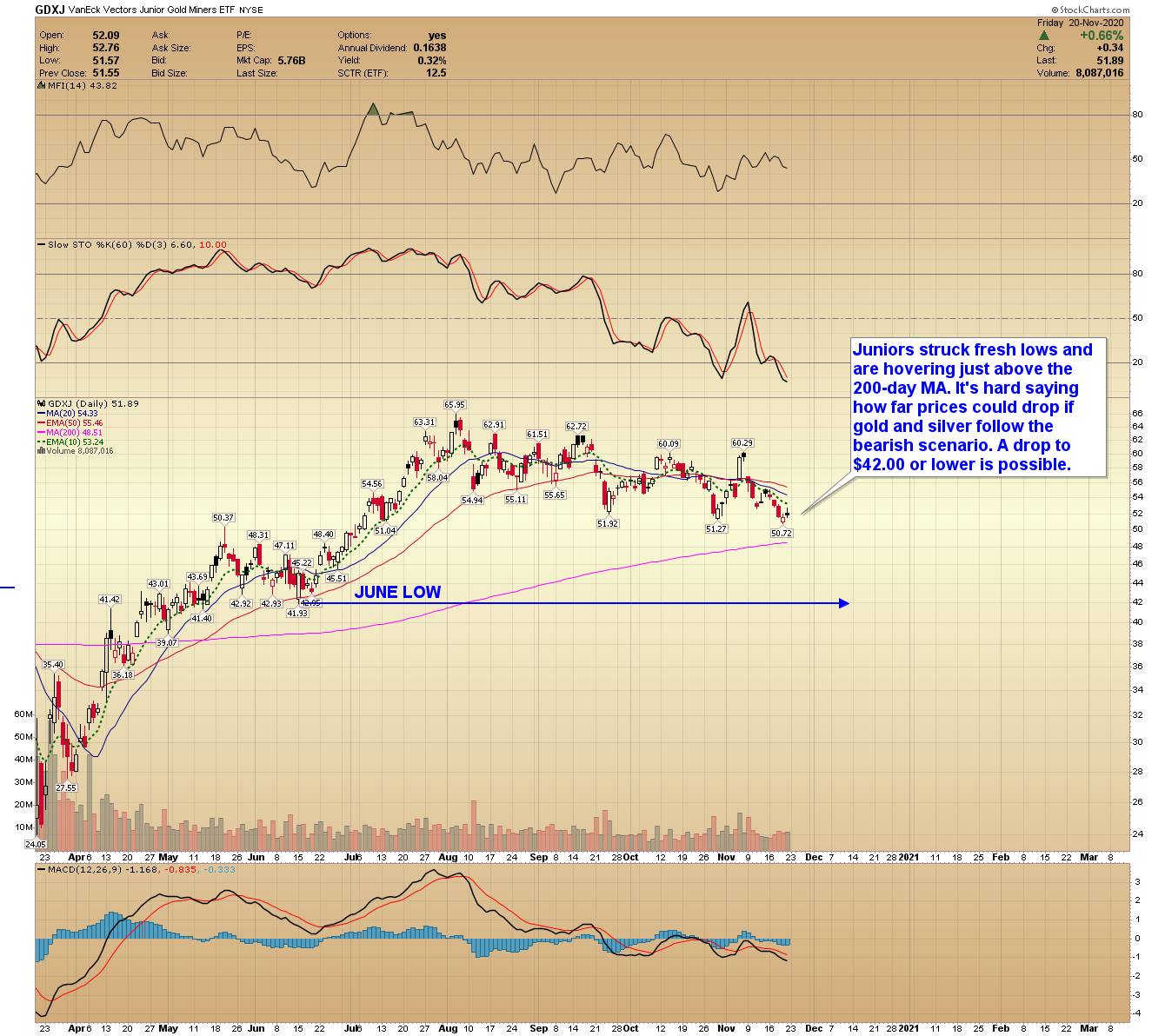 -SPY- The stock market could be tracing out a megaphone pattern. If correct, then I see the potential for a sharp decline back towards the 320 level in December. 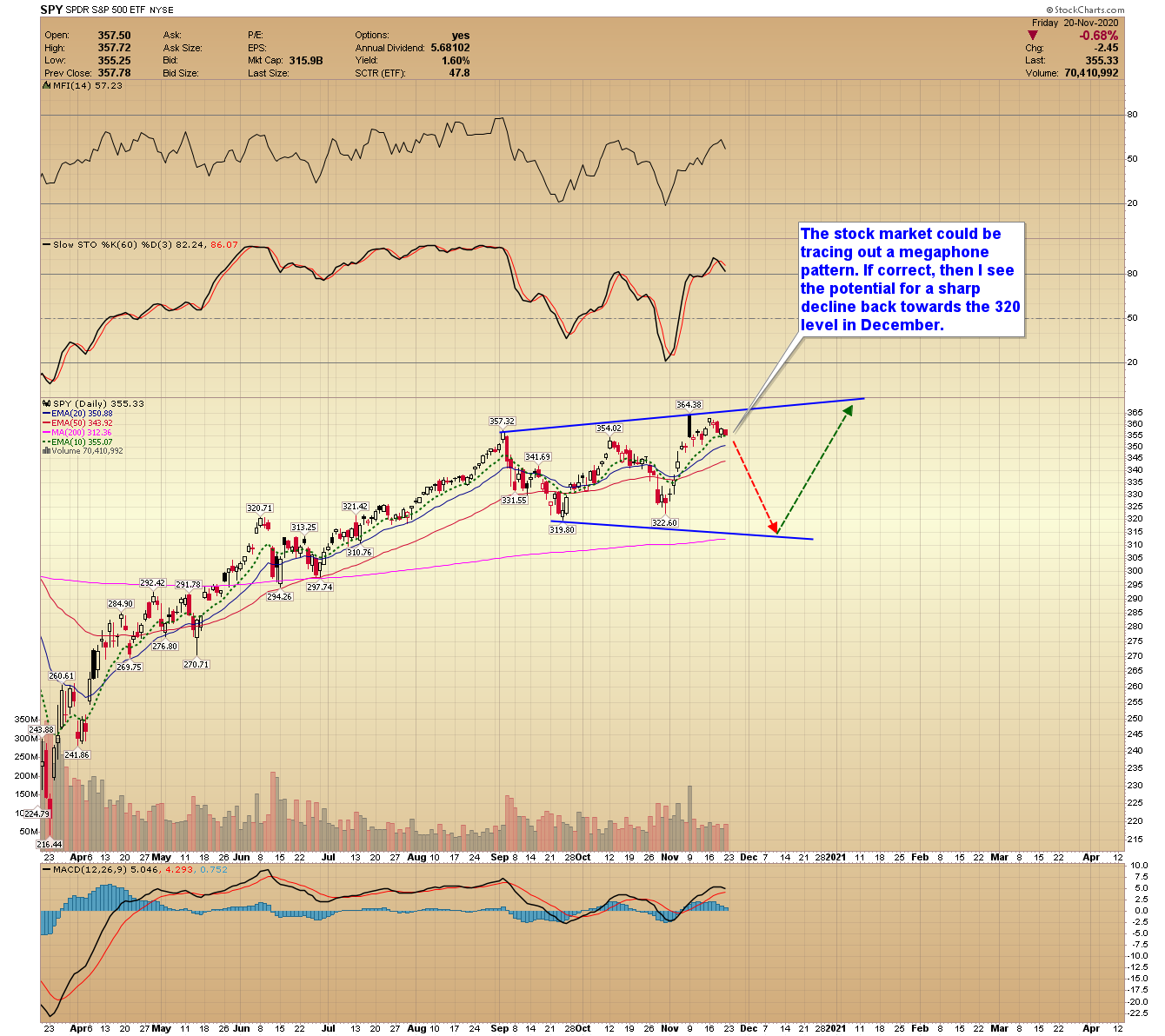 -XLE- The energy ETF is up over 30% from the October low, mostly because of positive vaccine news. I still see a double bottom potential, but that scenario requires a double-dip recession triggered by more lockdowns. 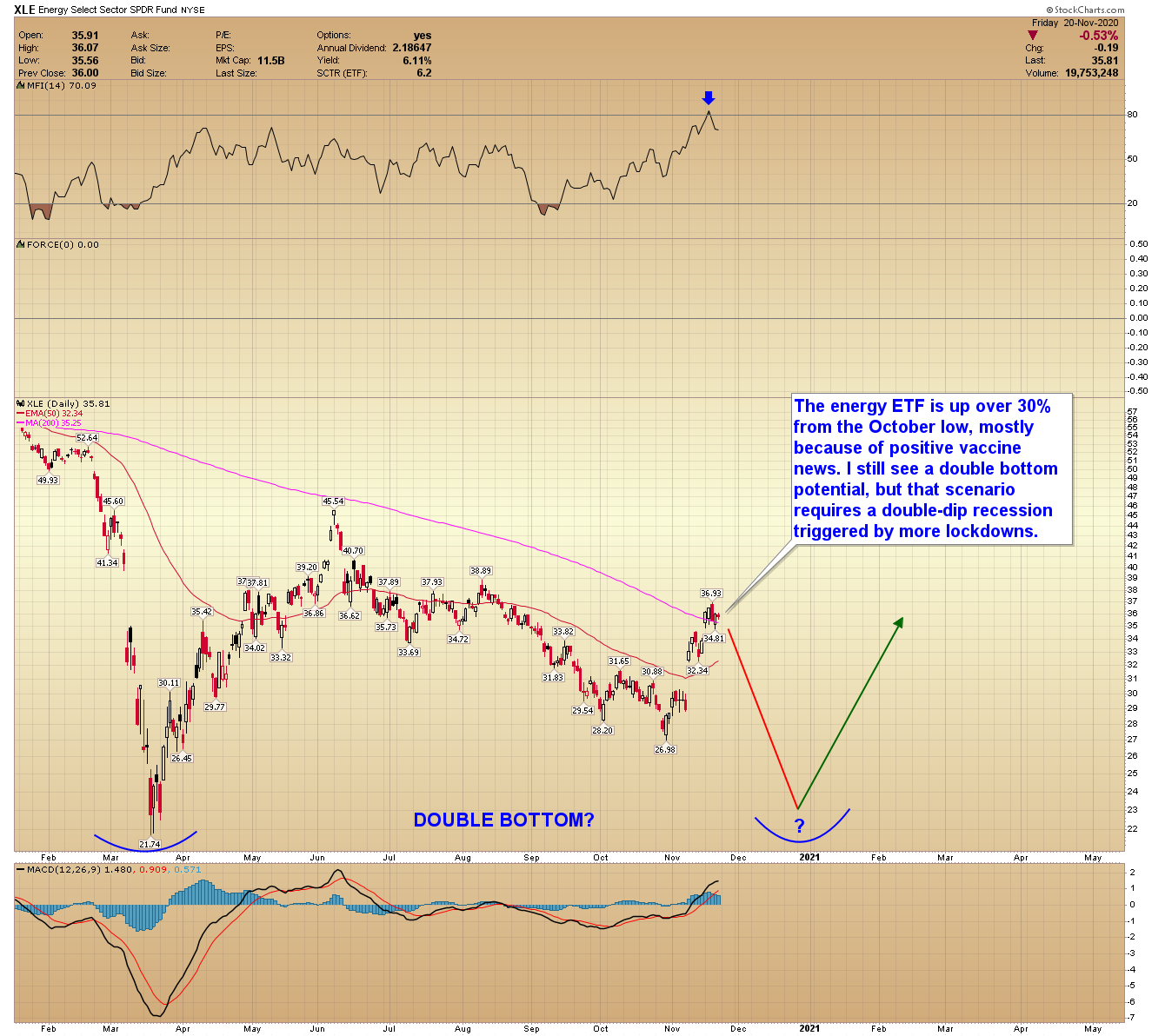 In conclusion, the key level in Gold is $1850: If gold stays above it, then great – we will probably just consolidate. If gold breaks immediately below $1850, that could trigger the deeper correction mentioned above.

This article was published Posted on November 22, 2020 in Categories Free Updates, Weekend Newsletters