After painting a somewhat dire picture in my global depression article, I wanted to expand on the developments that have me concerned. It’s clear to me that the retail trading frenzy is reaching extremes. Typically, this type of behavior precedes a collapse. I don’t know what, and I don’t know when, but the market seems vulnerable to a devastating breakdown.

Trading Volume is Exploding: Average daily trading is up sharply in 2020. Volume has jumped from 2.5 million to over 7.7 million in the last three quarters. Note- This only accounts for E*TRADE, Schwab, interactive brokers, and TD Ameritrade. It does not include Robinhood, so the number is probably much higher. 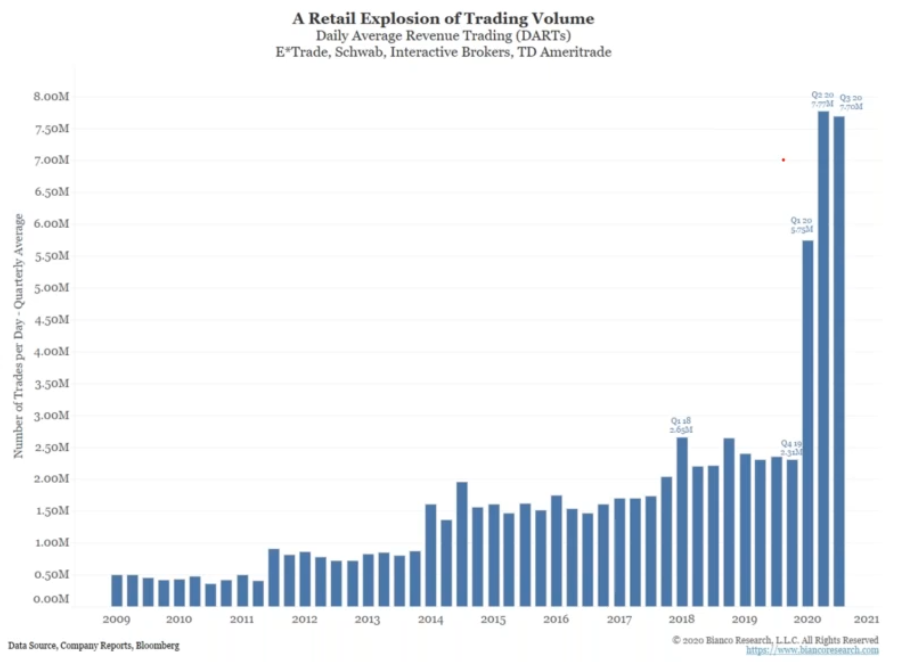 Record Speculation From Small Traders: Supporting the above chart, small trading call buying accounted for 22% of opening volume. Note- We exceeded the dot.com bubble peak in 2000.

Speculative Bubble in Electric Vehicle (EV) Stocks: I’ve been highlighting Tesla’s extreme overvaluation for several months. This stock and the entire EV sector has ALL the hallmarks of a bubble. Below you will see the world’s largest automakers by market cap (the black line is Tesla). The center comprises 2019 sales per manufacturer. Tesla’s market cap is greater than all of these companies combined (Toyota, Volkswagen, dialer, BMW, Honda, and Ford). In 2019, Tesla made just 375,000 vehicles versus a combined total of over 37-million, including Ford (which is not on the chart). In a nutshell, Tesla has 100% of the market cap but produces just 1% of the vehicles. 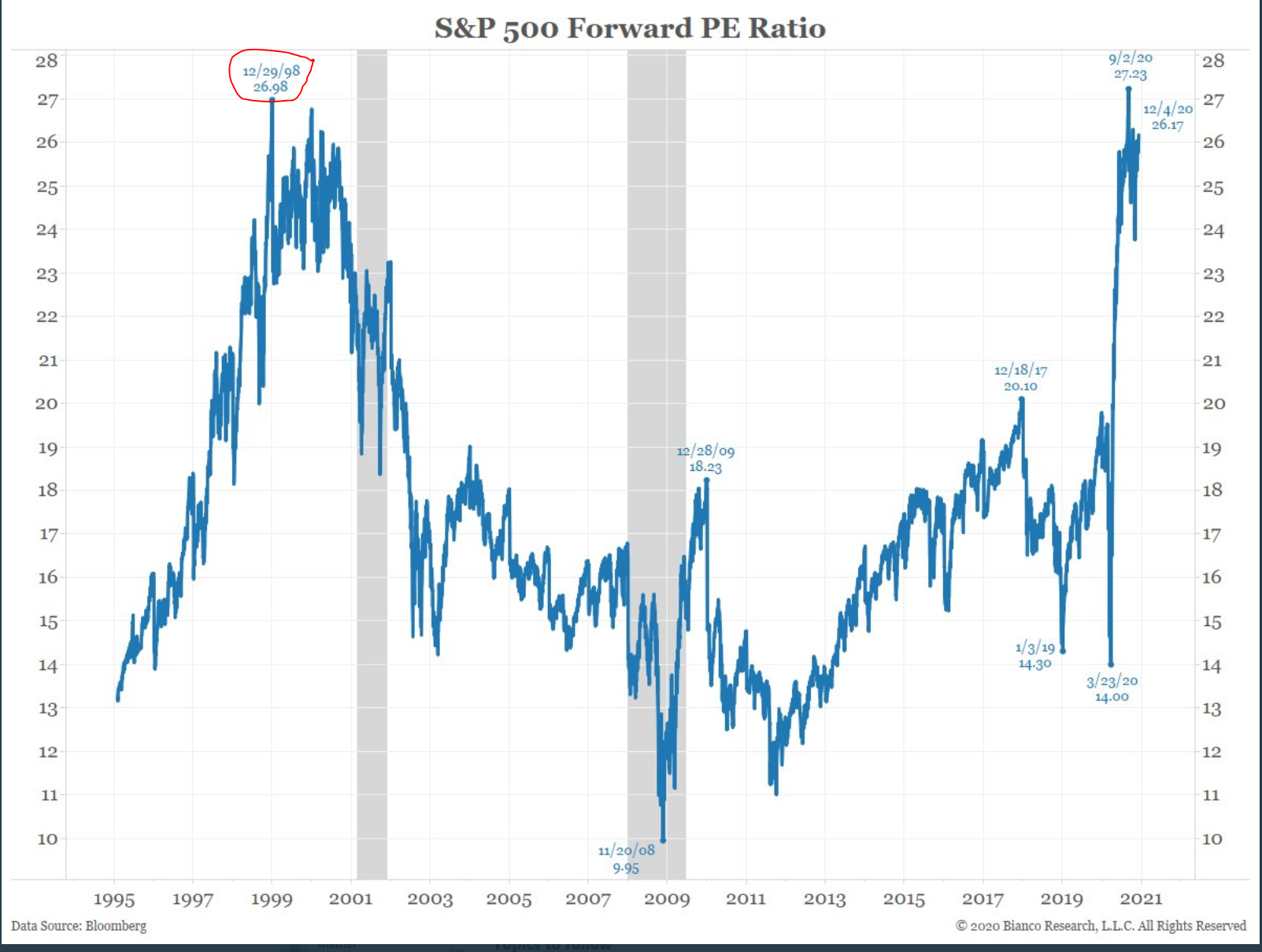 There is ample evidence of excessive speculation in the markets, especially on the side of retail traders. It’s been my experience that these situations almost always end in disaster. I don’t know what will cause Tesla shares to crash, but it seems inevitable, in my opinion. Perhaps, it will happen after they join the S&P 500 on December 21. Whatever the case, I believe extreme caution is warranted.

The gold cycle indicator finished the week at 78. As long as it remains below 100, I will continue to look for one more quick decline in December.

-GOLD- Gold reached an interim low on Monday at $1767.20. Prices bounced and tested the 20-day MA by Friday. If prices are going to drop one more time in December, as I suspect, they should start falling from here. Closing back below $1800 would support the one more drop theory and recommend a spike below $1750 before prices bottom. Gold would have to close progressively above $1860 to nullify the one more drop scenario.

-SILVER- Our work continues to look for one more decline in silver to our target box. Closing below $22.00 would confirm this outlook. Otherwise, prices would have to close above the November high ($26.14) to recommend a 6-month low and bullish breakout. 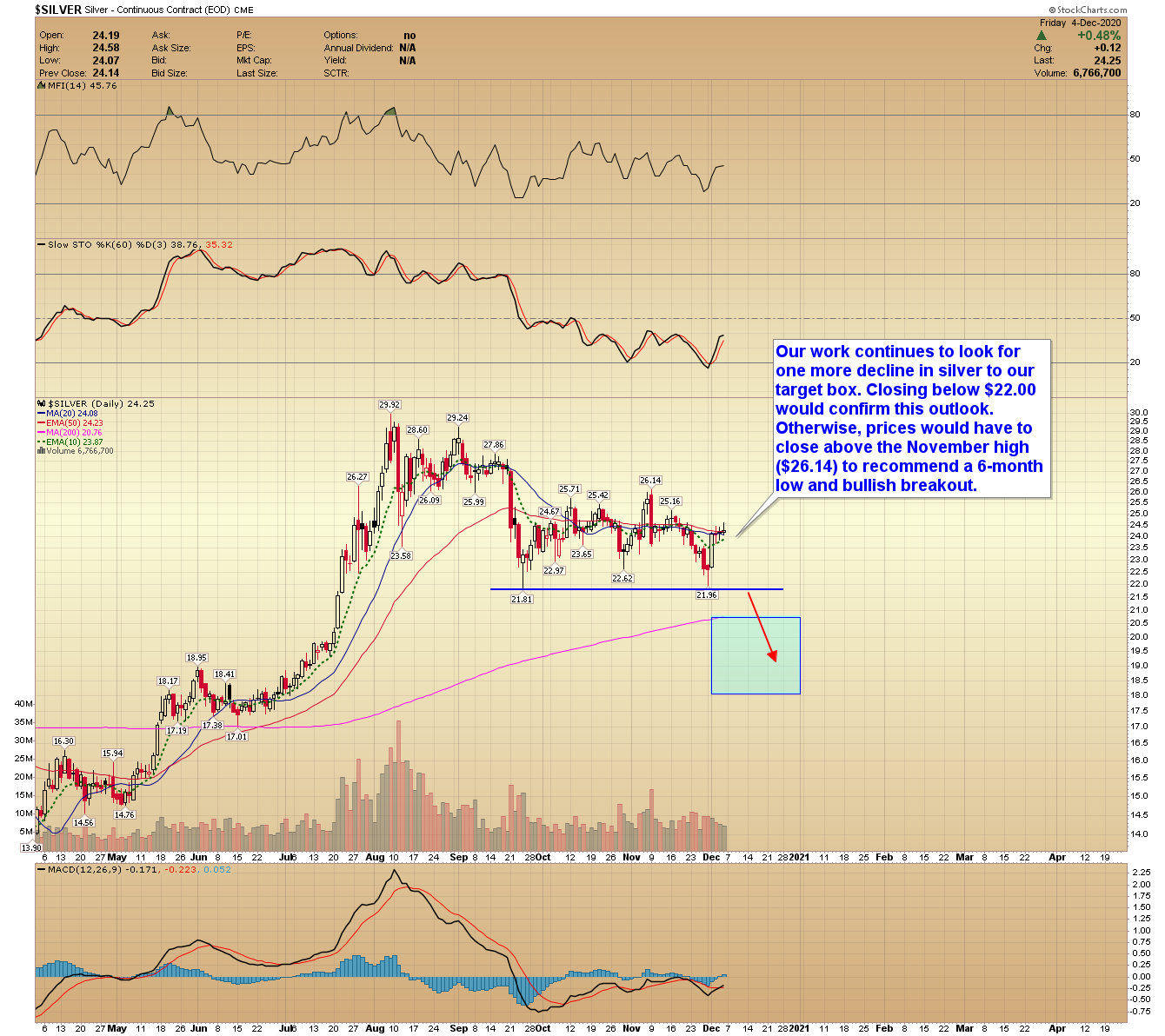 -PLATINUM- Platinum finally exceeded the January 2020 high ($1046.70), supporting a bull market breakout. If prices close above $1100 next week, then they could keep soaring despite the overbought conditions. Near-term, prices are overdue for a pullback, and closing back below $1050 would recommend an interim high. The recent breakout is a bullish development, and I believe platinum will rally sharply in 2021 and outperform gold. 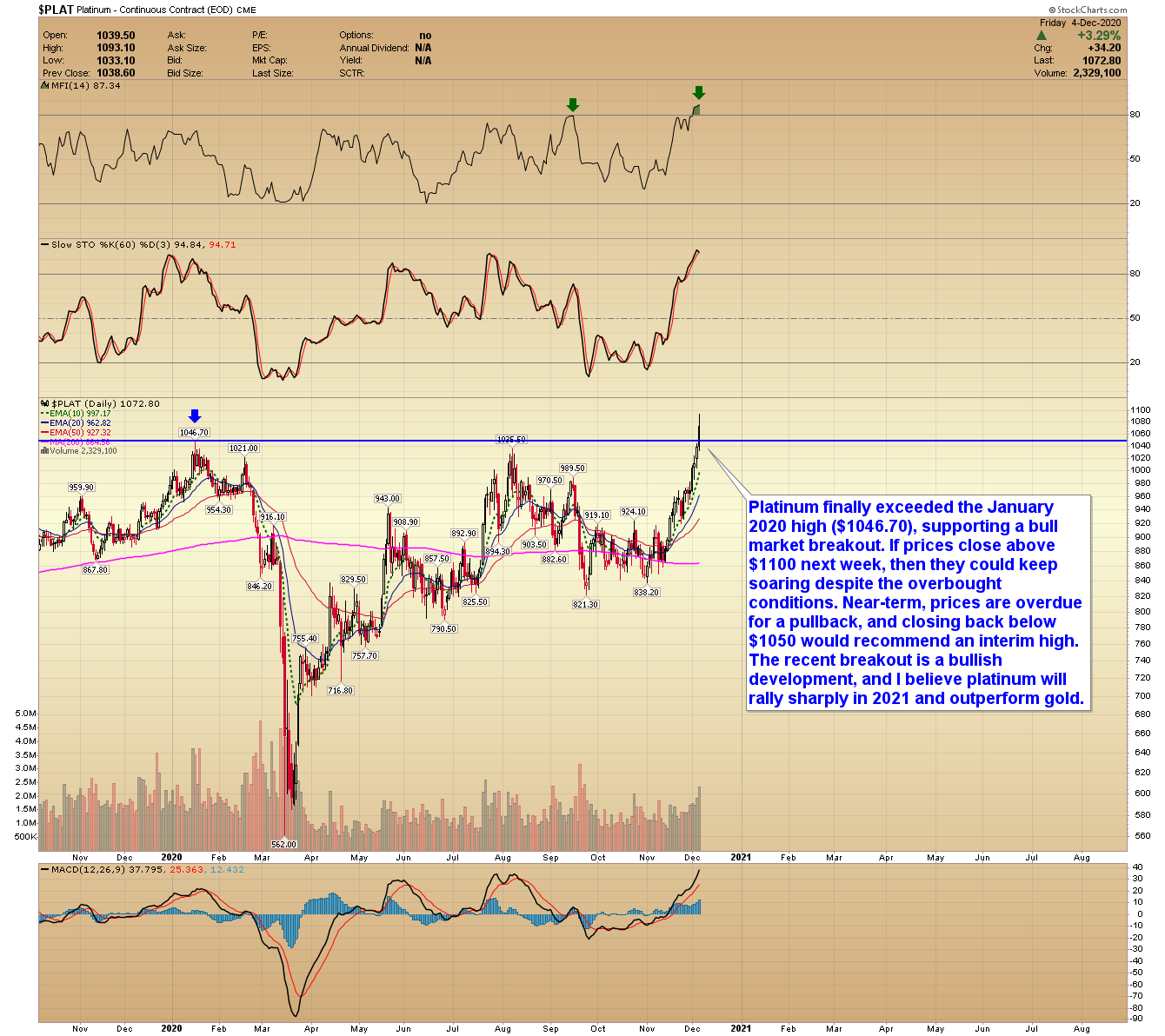 -GDX- I continue to look for one more decline in December to complete the 6-month low. Closing below Tuesday’s gap ($34.68) would recommended a decline to and perhaps a brief spike below the June lows. Gold miners would have to close progressively above the 50-day EMA (currently $37.56) to nullify the one more drop scenario.

-GDXJ- Closing below Tuesday’s gap ($50.00) would recommend a breakdown towards the $42.00 level. Juniors would have to close progressively above the upper trend channel around $57.00 to suggest a breakout. 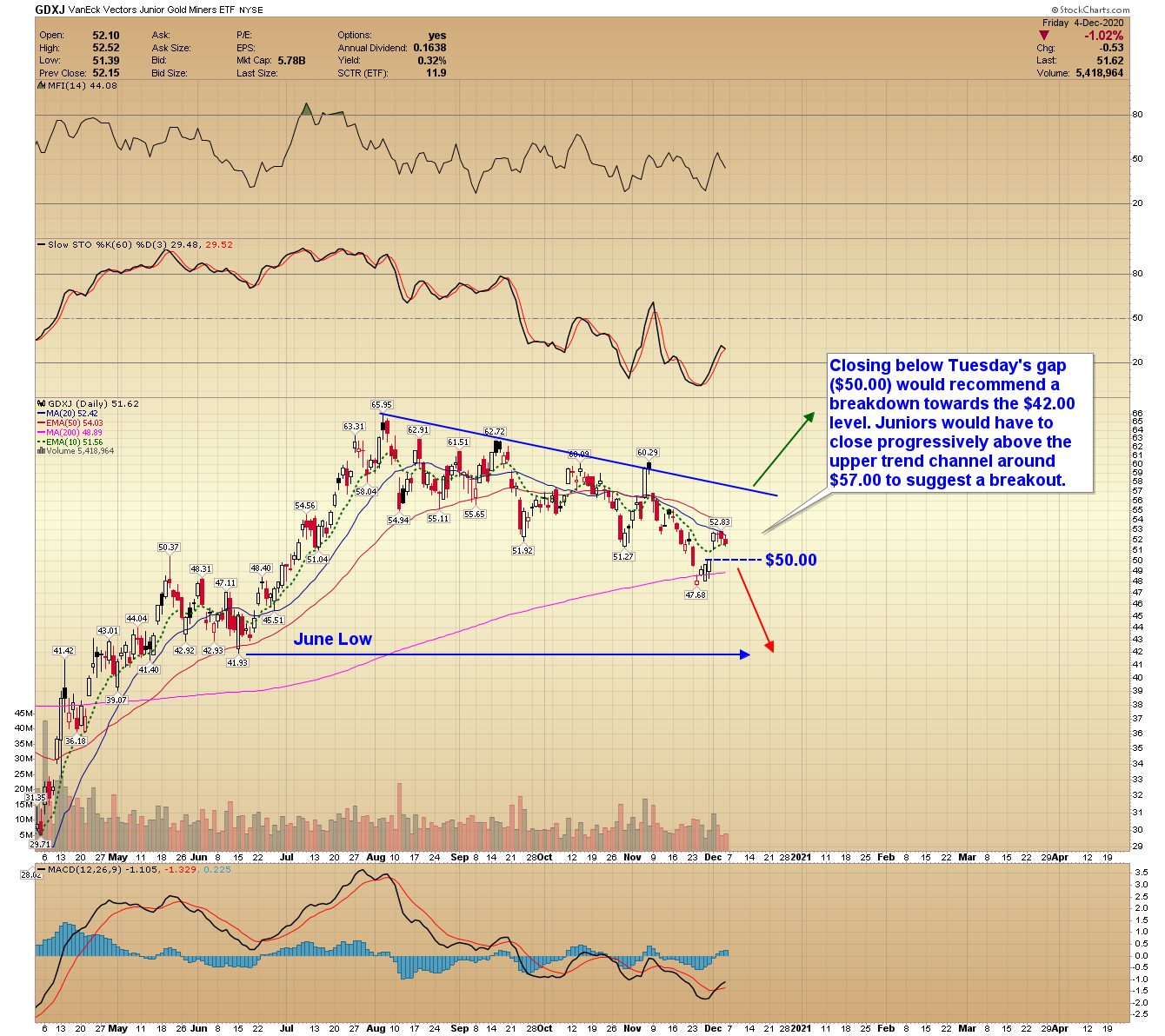 -SPY- Stocks continue to surge over vaccine news and the potential for more stimulus. As described at the beginning of this article, speculation and valuations are reaching extremes. Prices can undoubtedly continue higher, but I feel like we are becoming vulnerable to a sharp decline. 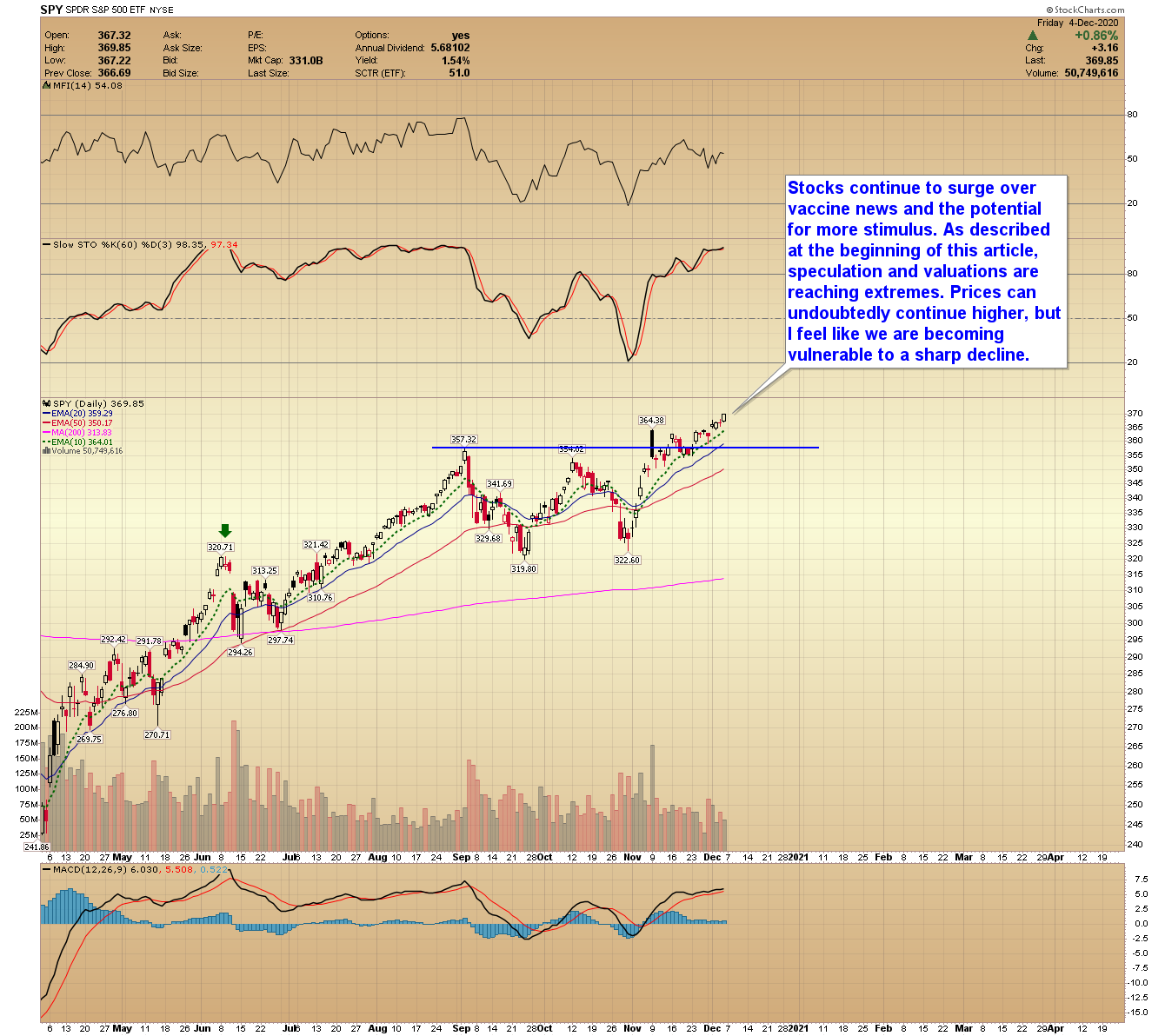 -TSLA- Tesla finished the week at just under $600; prices are up 50% since the S&P 500 announcement. Typically, bubbles end with a parabolic spike high (blow-off top). I suspect we will see that sometime in December. 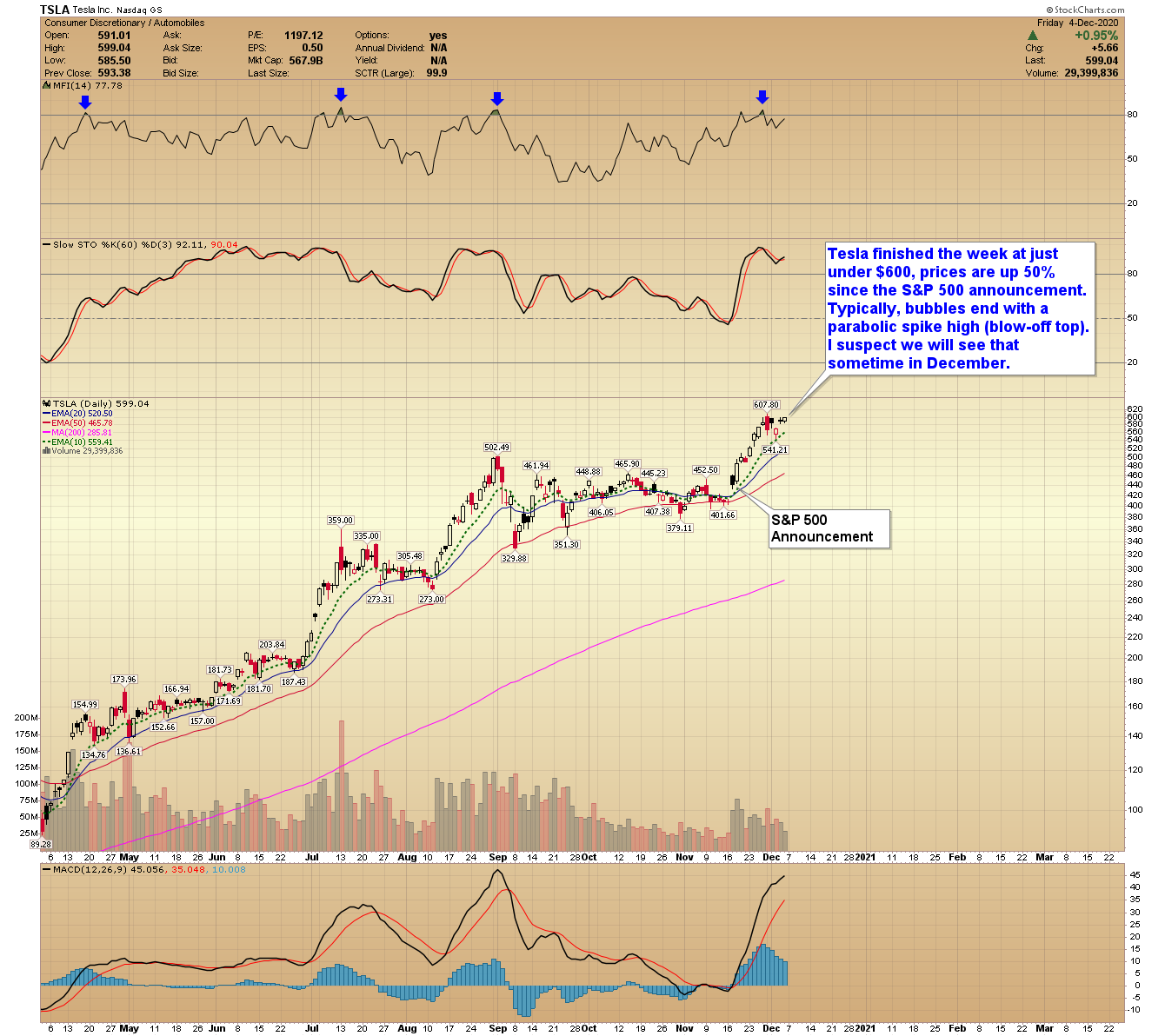 Final Thoughts: Gold is providing an excellent long-term buying opportunity, and I think prices will go much higher next year. We are very close to a 6-month low. Though prices could spike a bit lower, I’m expecting a strong rally into April/May 2021, once a bottom is confirmed.

This article was published Posted on December 6, 2020 in Categories Free Updates