It is looking more and more like gold prices probably bottom in November, and we are climbing a wall of worry.

Silver and platinum are beginning to lead the sector higher, suggesting a rotation out of gold and into the more leveraged, smaller sectors. This theory also explains the underperformance in GDX.

It looks like gold is awaiting a catalyst to push it above its intermediate trendline and confirm a breakout. Until that catalyst arrives, gold could continue to stagnate.

Georgia Senate Race
Next week’s Georgia Senate race is crucial. Currently, markets are expecting a Republican-controlled Senate and divided government. However, if the Democrats were to win both seats, they could take control of the Senate. I think markets could sell off sharply if they win. According to predictit.com, the odds of a Democratic victory are 35% versus 68% for Republican control. 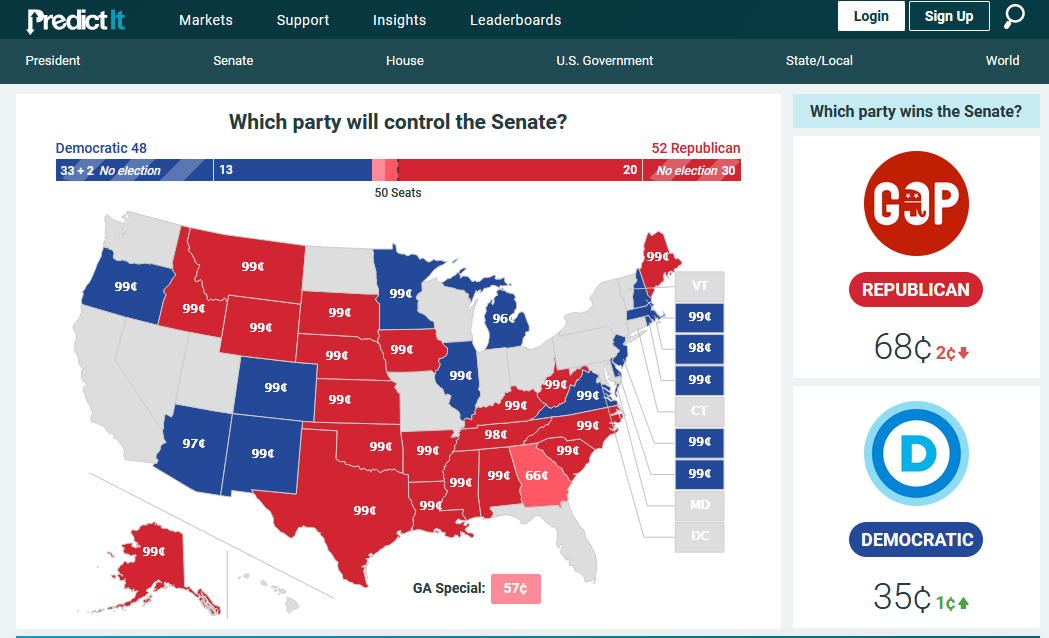 It’s hard to know what market event will trigger the next leg higher in gold, but it feels close. Next week is shaping up to be notable.

The gold cycle indicator finished at 93. We continue to look for a close above 100 to support a breakout in precious metals.

-GOLD- I think there is a good chance gold bottomed in November, and prices are climbing the “wall of worry” before breaking higher. I suspect a bullish catalyst will pop up in the next few days/weeks that will trigger an upside breakout. Until that catalyst arrives, prices could remain rangebound or even pullback. I don’t see prices dropping to new lows at this time – unless something surprising occurs. 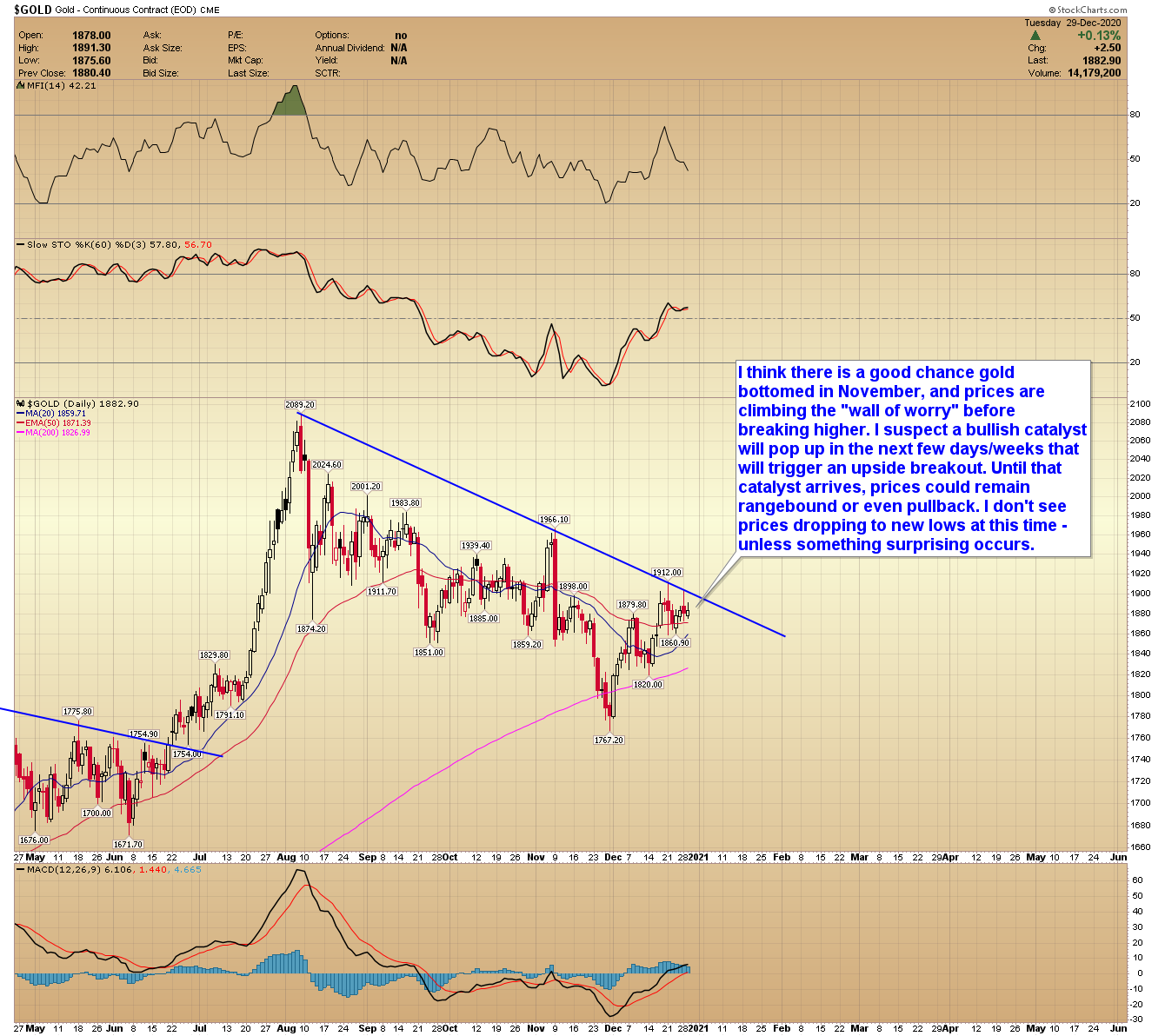 -SILVER- Silver continues to confront the intermediate breakout line, and the trend looks healthy. Progressive closes above $27.00 would support a breakout.

-PLATINUM- Platinum is leading the pack, and closing above $1100 would signal a breakout. As mentioned in the weekend newsletter, a run to $1200 could happen quickly, followed by $1500 if a breakout is confirmed.

-GDX- Senior gold miners remain weak relative to Juniors and Silver. I think money may be coming out of the more prominent names and moving into the more leveraged companies and sectors. Because GDX is diverging a bit, a retest or undercut of the November low is possible if prices close below the dashed trendline (roughly$35.00).

-GDXJ- Juniors are closer to a breakout than GDX. Closing above $57.00 would confirm a new cycle advance. Until that happens, more consolidation or pullback is possible. 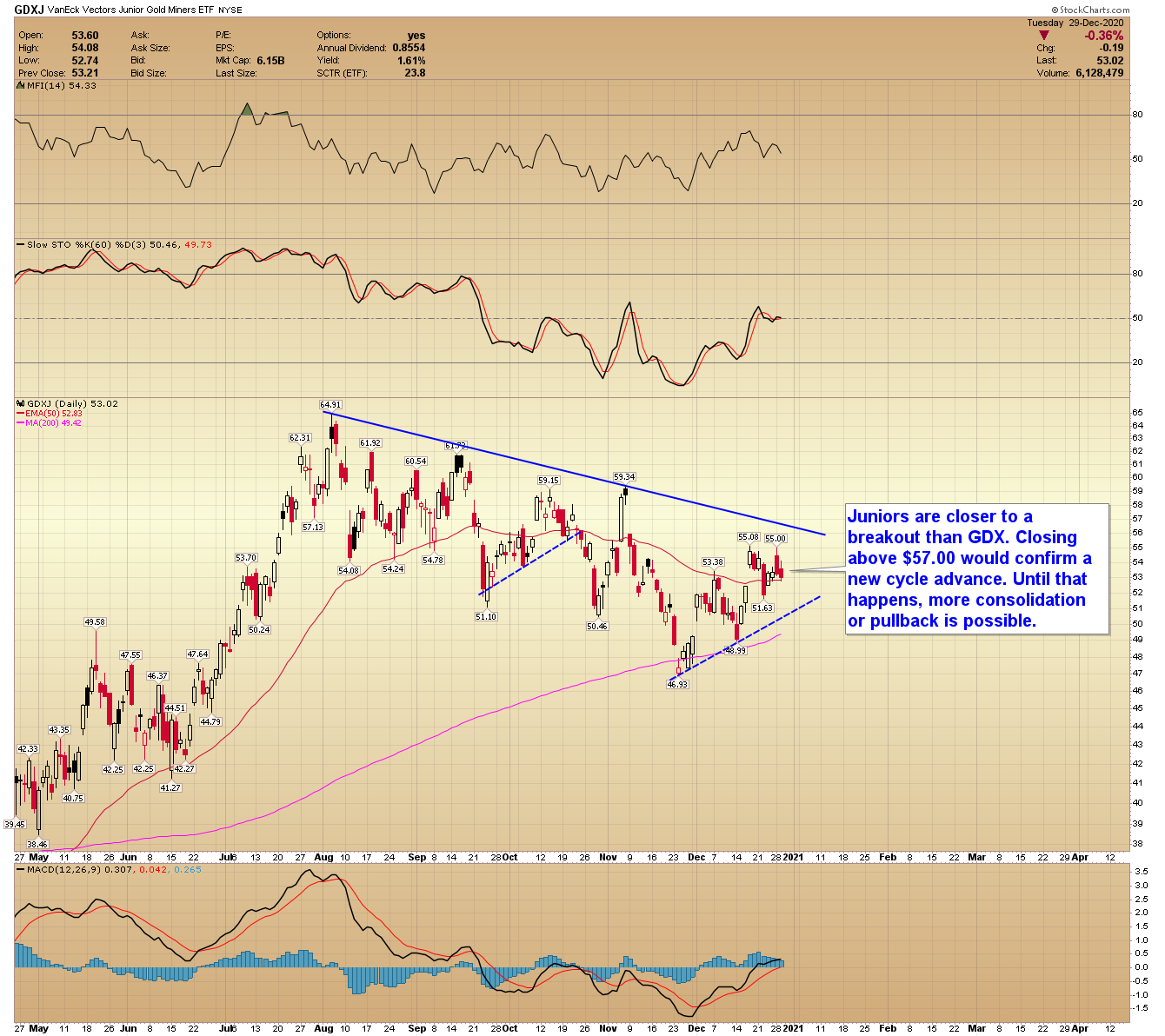 -SILJ- Junior silver miners look healthy and remain above their breakout trendline. A little upside follow-through could trigger the next advance. Prices would have to close below $15.00 to prescribe a near-term breakdown. 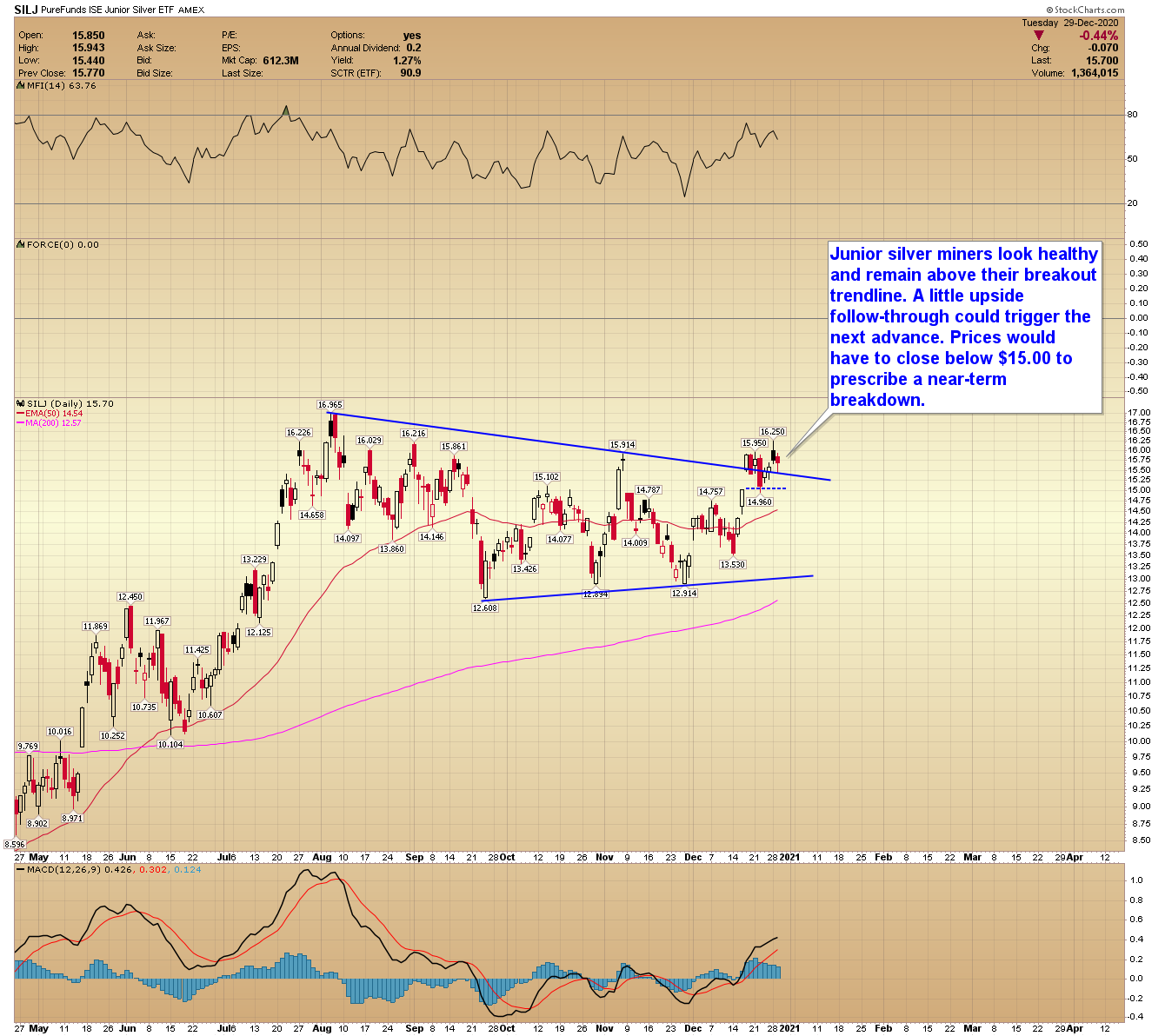 -SPY- The stock market has stalled as much of the “good news” is already baked in. All we have left is “bad news” scenarios, and that leaves the market vulnerable, in my opinion. The excessive bullishness of retail traders and option buyers suggests a correction is possible. Initial support arrives at 350. If that fails, the next area of fortification comes in around 320. It would take a collapse below the final support zone near 295 to suggest something very wrong with the stock market and a double-dip recession. 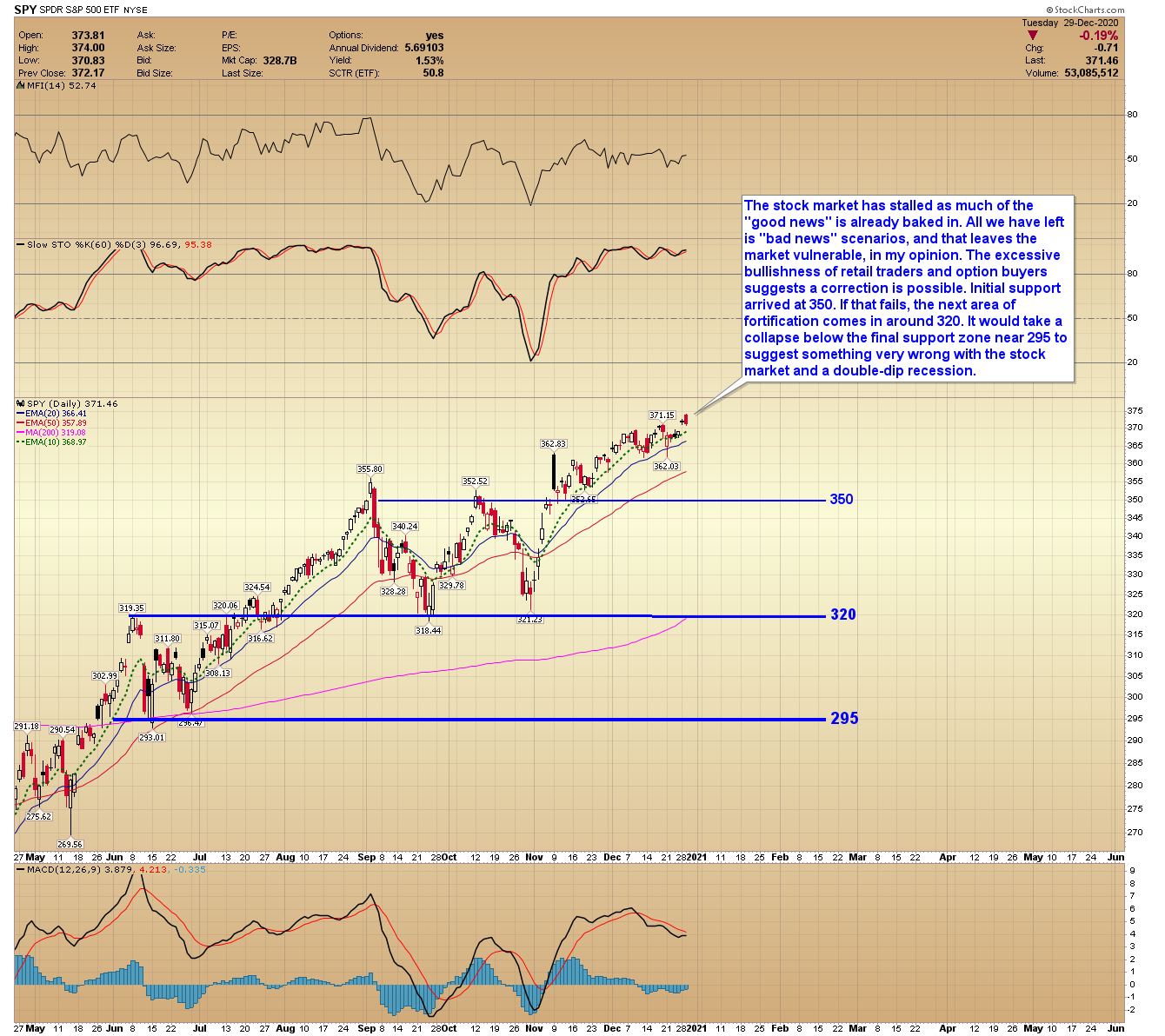 -TSLA- I remain very bearish on Tesla and think prices are approaching a notable top. The trend is crawling along the 10-day EMA, and a sharp decline feels imminent. A peak in January makes sense as most investors would like to make it to 2021 before taking profits. 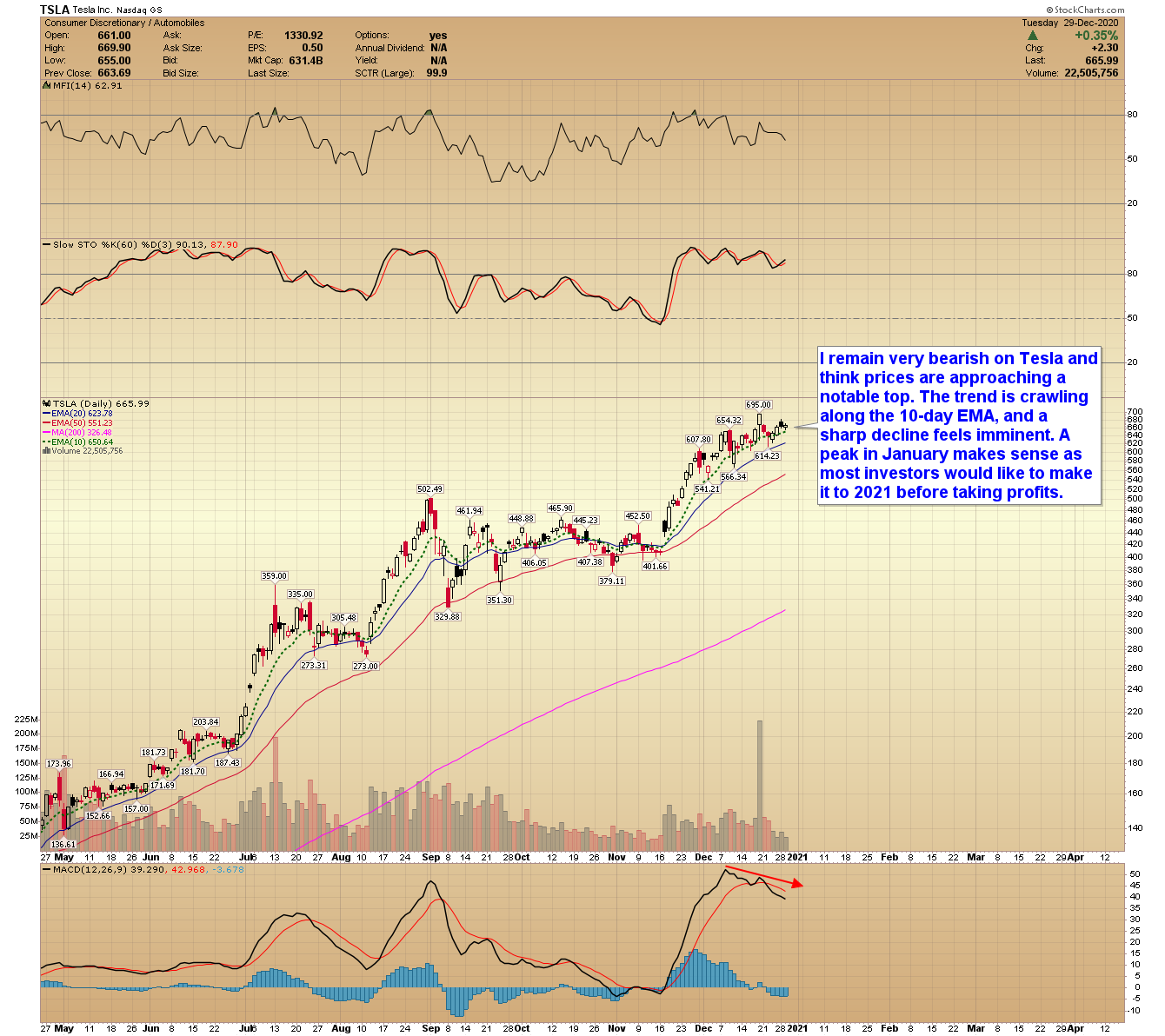 This article was published Posted on January 4, 2021 in Categories Free Updates, Reports