I’ve grown a little bearish over the near-term, given the excessive bullishness I see in options buying and retail trading. High flyers like Tesla and Bitcoin are not driven by fundamentals, but by speculation and excess liquidity. This extreme risk-taking leaves the markets vulnerable to a sharp correction, in my opinion.

It seems most of the “good news” is already baked into the markets. Governments passed more stimulus, and vaccines are making their way across the globe. Stocks are at new all-time highs and there’s talk about a repeat of the roaring 20s. However, what’s happening in the real economy is entirely different. I don’t think we will understand the depth of this divide until next year. Below are some “potential hazards” I see going into next year.

EVICTIONS AND FORECLOSURES: According to a recent survey by the US Census Bureau, of the estimated 17-million adults who are not current on their rent or mortgage payments, 33% could face eviction or foreclosure in the coming months. 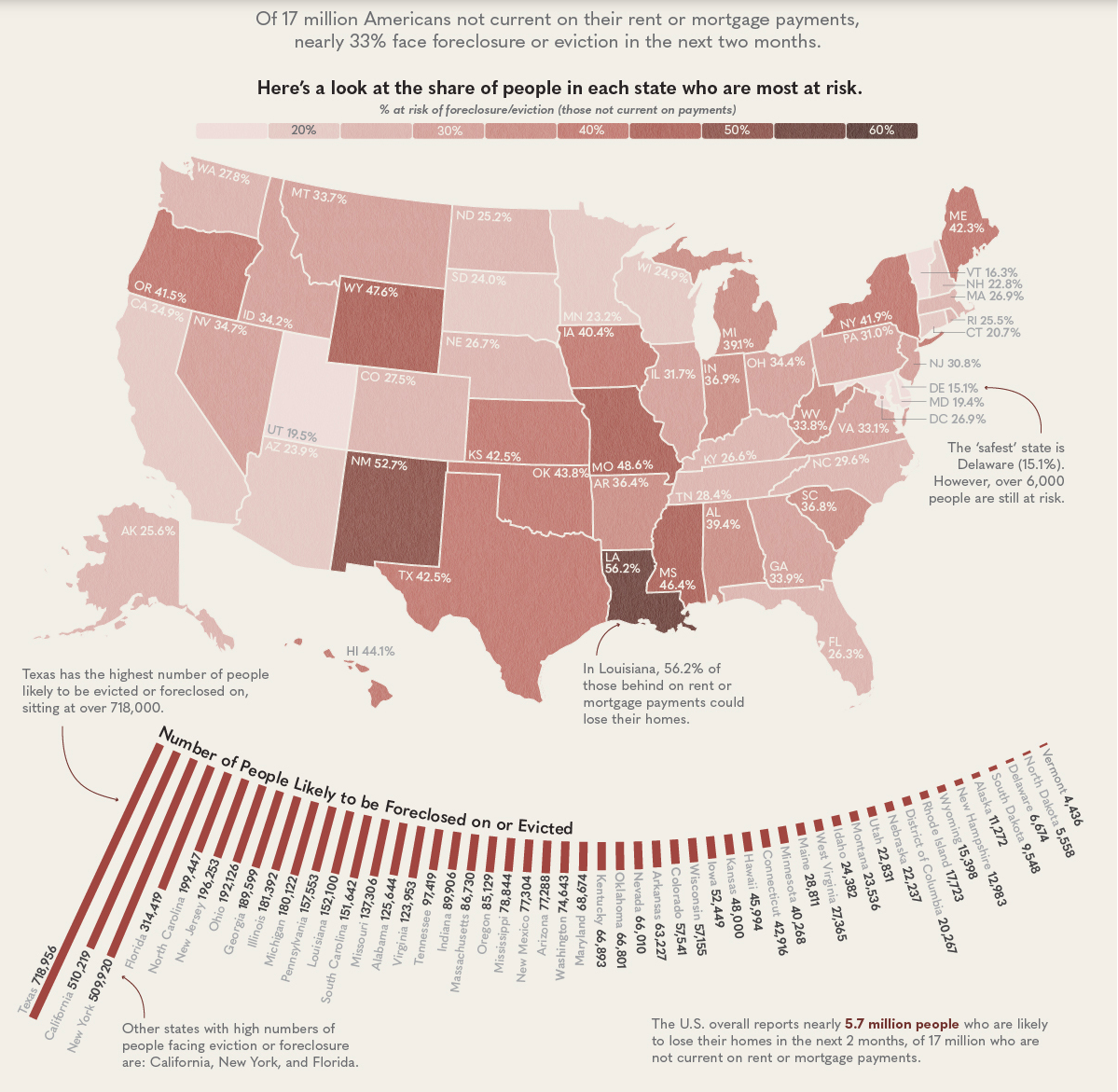 Eventually, moratoriums will be lifted, and people will need to start paying rent. By the end of next year, I expect to see foreclosures popping up in some cities. Increased housing inventory could lead to lower prices and perhaps a housing glut. Rural housing should do better as people migrate out of cities to safer and more spacious arrangements.

COMMERCIAL REAL ESTATE: How many restaurants, shops, malls, hotels, etc., won’t reopen in 2021? How many office buildings will remain vacant as employees work from home? How many commercial leases won’t be renewed? How many tenants walked away from their facility/business, never to return? Eventually, this could lead to a massive restructuring of commercial assets and could take years to unwind.

LOST TAX REVENUE: The long-term tax outlook for major cities is bleak. As employees work from home, they will no longer commute into the city. Tax revenues could plunge as companies and residents flee high tax states. Municipalities will be forced to raise taxes or slash services (probably both). Consequently, the exodus from states like California to low tax states like Texas will only make matters worse.

BANKRUPTCIES AND DEFAULTS: How many of the struggles mentioned above will result in bankruptcies and defaults? Hard to say, but I believe it will be significant. Going into the crisis, the personal savings rate was low. Millions of Americans didn’t have enough savings for even 3-months of expenses. When stimulus and employment benefits run out, I think there will be a reckoning, and we won’t know how bad until next year.

K-SHAPE RECOVERY: Currently, the markets are pricing in a V-shaped recovery. I am less optimistic for the reasons described throughout this report. One scenario I am considering is a K-shaped recovery. This occurs when people with assets (own stocks and real estate) get wealthier through asset inflation, while those without assets (the have-nots) struggle to find employment, lose skills, and become permanently unemployed. As a result, the wealth-gap widens and produces increased social and civil unrest.

CYBER ATTACKS: A few weeks ago, SolarWinds – a major US information technology firm, was the subject of a cyberattack that spread to its clients, including the US government. Foreign hackers used it to spy on private companies like cybersecurity firm FireEye and other Government agencies (Homeland Security and Treasury Department). It was the largest cyber-attack in US history, according to experts.

The combination of supercomputers and artificial intelligence makes cyber-attacks a threat like never before. No longer is it a single hacker in a basement trying to breach a firewall. Today, supercomputers are doing the hacking – they don’t need to sleep, they don’t eat, and they don’t get paid. They work 24-hours a day, relentlessly probing systems for weakness.

An attack on the power system, electrical grid, oil refineries, etc., could cripple utilities and infrastructure. If the payment system goes down, no one would be able to use credit or debit cards. For that reason alone, it’s probably wise to have some cash on hand to pay for essentials in the event of an outage.

VACCINE EFFECTIVENESS: There is a lot of hope riding on the effectiveness of these vaccines. The Pfizer and Moderna vaccines are reported to be about 95% effective. What if, for some reason, they aren’t?

We’ve had some very smart people working on the flu vaccines for over 20-years. On average, the flu vaccine is only about 60% effective, and some years just 40%. To create and distribute a new vaccine that is 95% effective…in less than 12-months would be game-changing if it works. And perhaps that’s what this is, a major scientific breakthrough, I don’t know. But, until I see long-term data supporting this, I remain skeptical.

In summary, the global economy has recovered significantly from the collapse. The stimulus provided by governments was massive, but it is wearing off. If the vaccines prove effective and the economy reopens, we could see above-average growth next year. However, there are significant hurdles to overcome. If the vaccines are less effective and the lockdowns remain, I believe we are at risk of a double-dip recession.

Sentiment turned positive for precious metals in 2020 after the global pandemic. Fear and uncertainty will remain for the next several years. Governments are printing staggering amounts of money, and this will ultimately lead to inflation. Gold will benefit as currencies are devalued. Precious metals and commodities are entering a bull market that could last over a decade, in my opinion.

The only way I see gold NOT doing well in 2021 is if the vaccines prove 95% effective (as claimed), reach wide-spread adoption (at record pace), and completely eradicate the coronavirus. I think the odds of that happening are pretty low.

The Gold Cycle Indicator finished at 97. I’m still looking for a finish above 100 to establish a cycle breakout.

-US DOLLAR- As I mentioned in the recent dollar update: I think prices are experiencing a meaningful devaluation. The trend is overdue for a bounce, but prices keep pushing lower. The final area of support arrives at the 2018 low of 88.15. If that level fails, I believe the USD could collapse to 80 by April/May 2021. 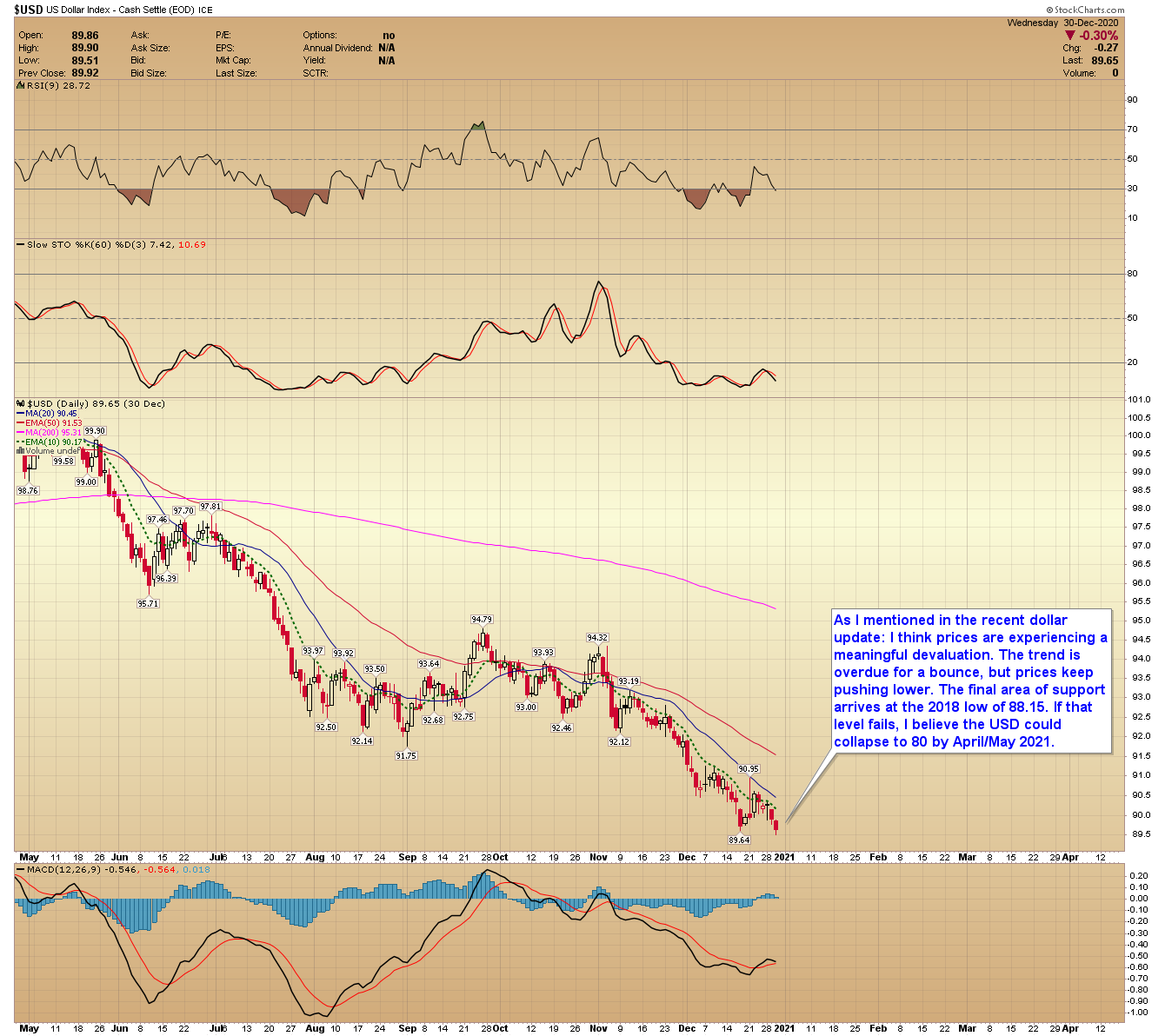 -GOLD- The 6-month cycle in gold likely bottomed at $1767.20 in November. Prices are climbing the “wall of worry,” and I expect a breakout above the intermediate trendline within the next 1 to 3-weeks. The trigger event to push gold through the trendline could arrive any day. The minimum target on a breakout is $2300 for the next leg higher. 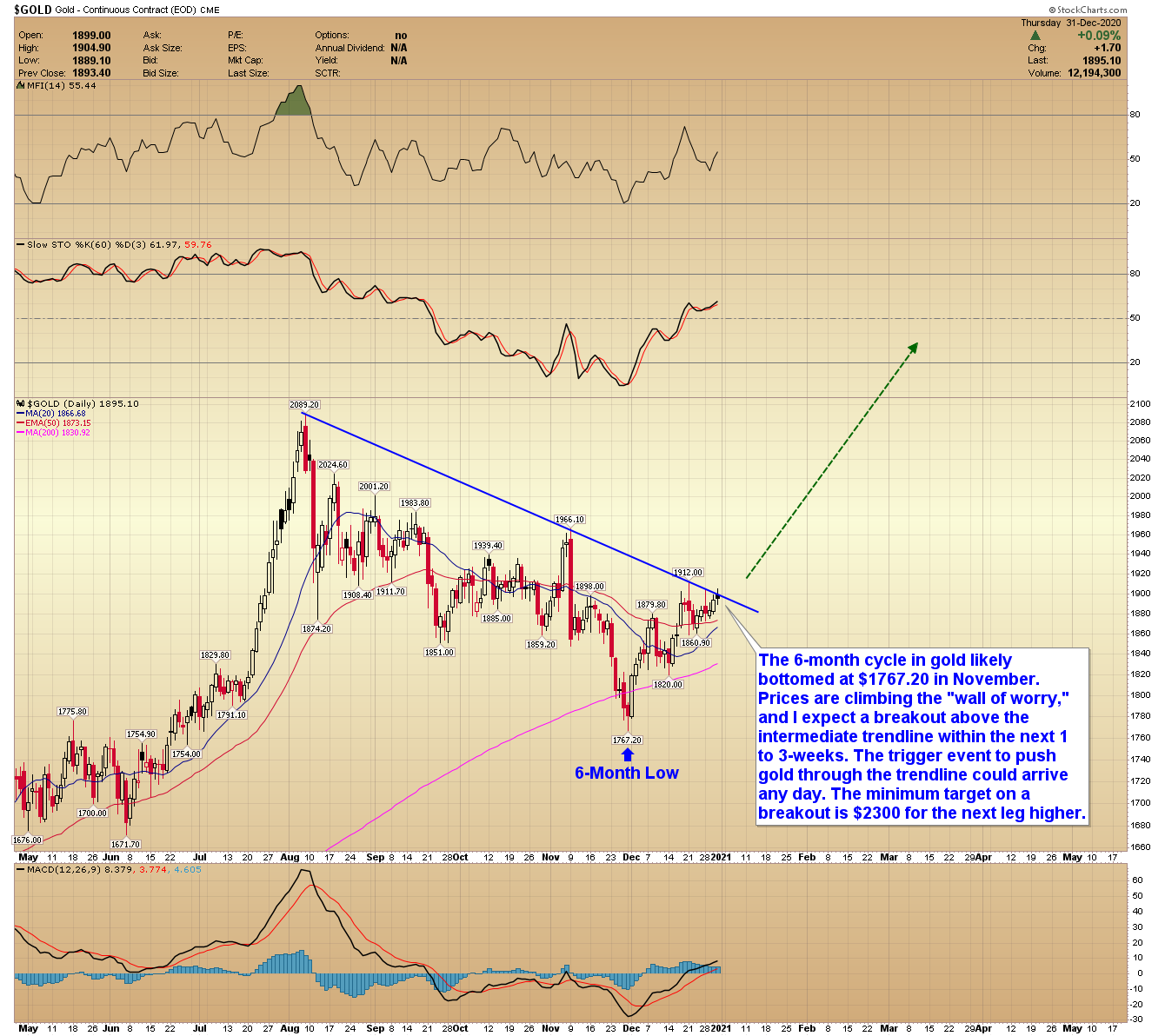 -SILVER- Silver appears to be leading gold, and prices are hovering just below the intermediate breakout line. Progressive closes above $27.00 would confirm a breakout. This advance’s minimum target is $35.00 with $42.00+ possible if we get an extended run. 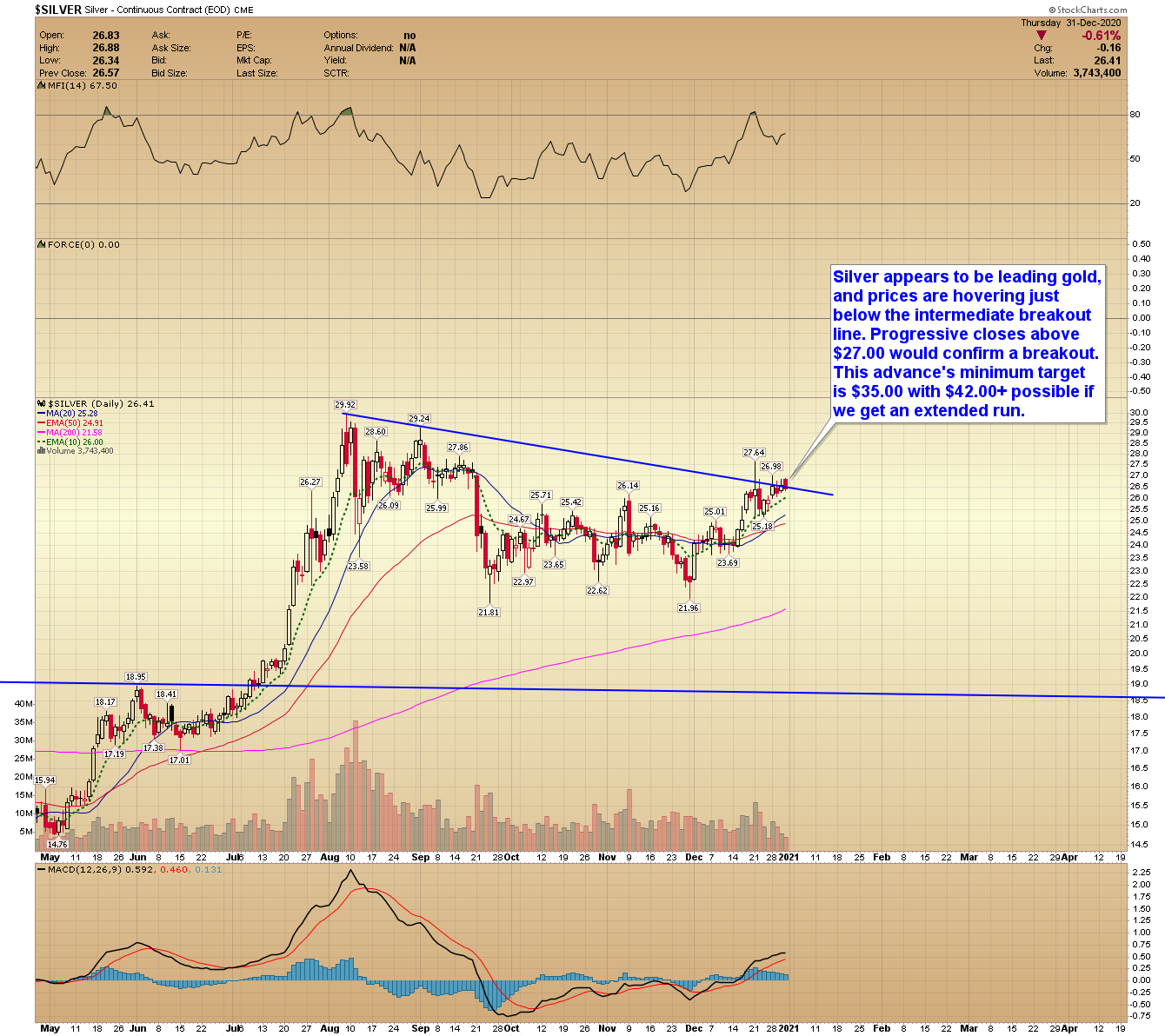 -PLATINUM- Platinum is leading silver, and closing above $1100 would support a breakout. If confirmed, a run to $1200 could happen quickly, followed by $1500. Both silver and platinum are well below their all-time highs and have some catching up to do. 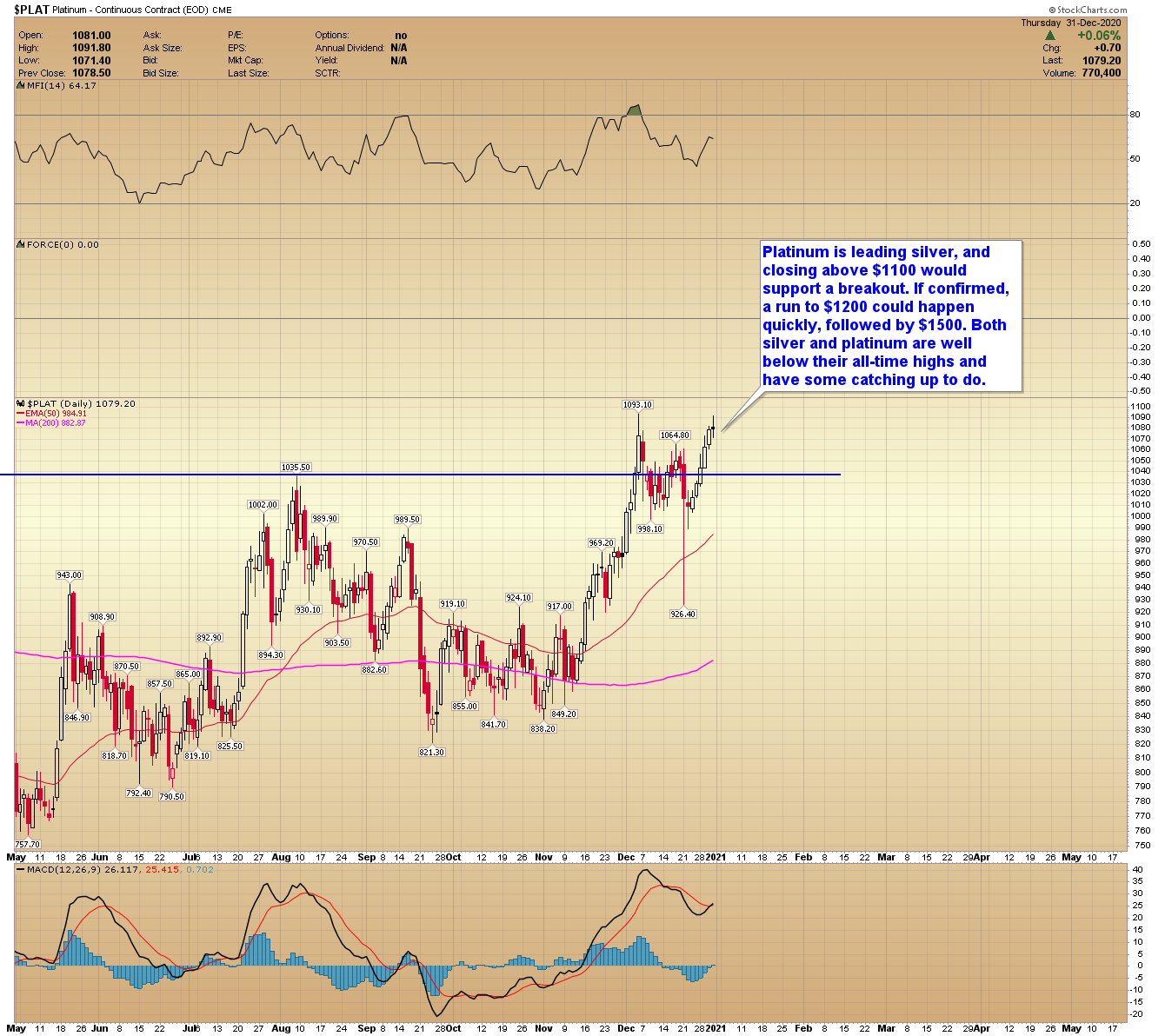 -GDX- Senior gold miners remain weak relative to gold and silver. I think money may be coming out of large-cap names and moving into the more leveraged smaller companies/sectors. Prices would have to close below the short-term (dashed) trendline to recommend a breakdown. Otherwise, I think they will start to trend higher once gold confirms a breakout above $1912. 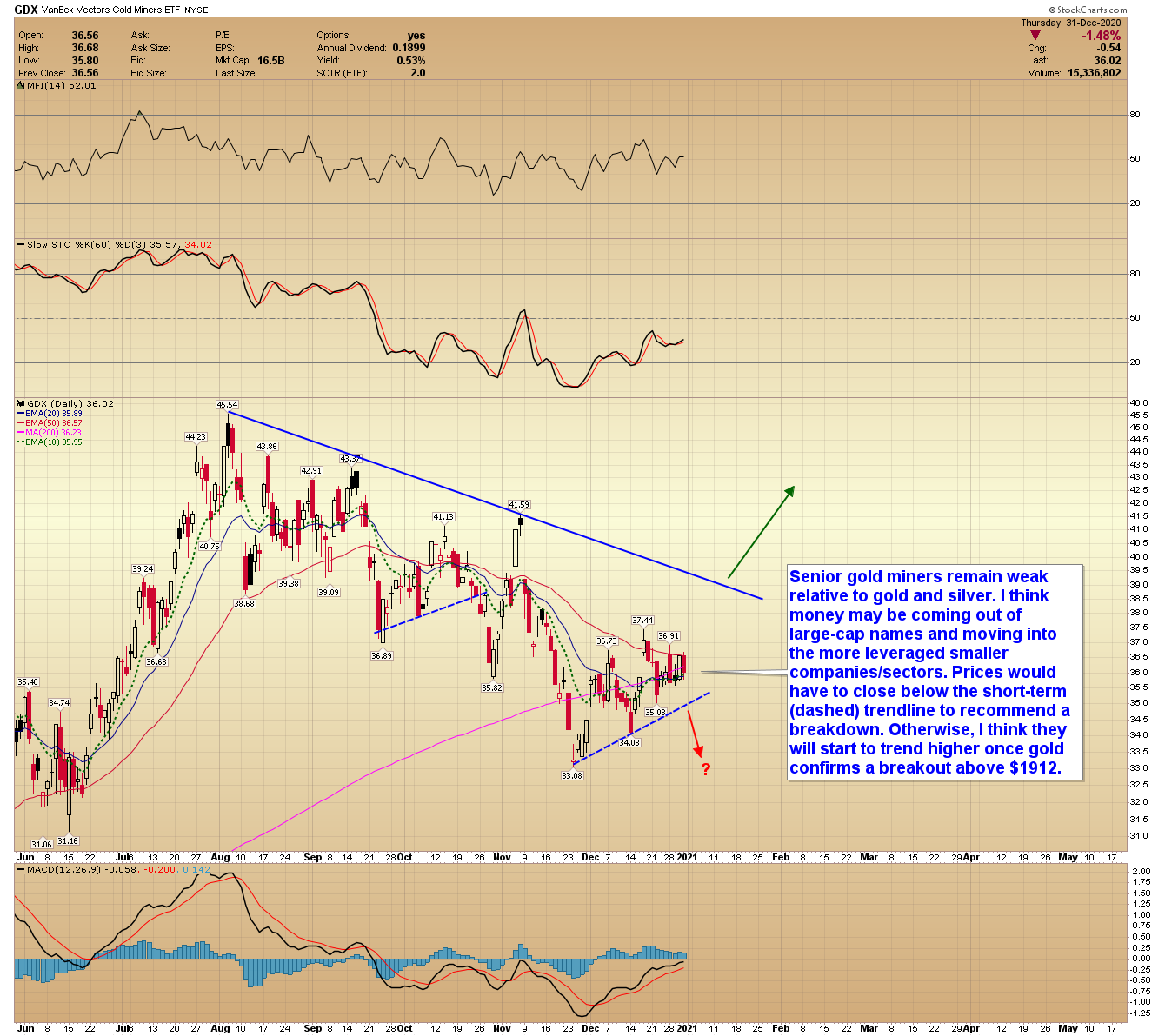 -GDXJ- Juniors are closer to a breakout than GDX, in my opinion. Closing above $57.00 would establish a new cycle advance. Until that happens, more consolidation is possible. 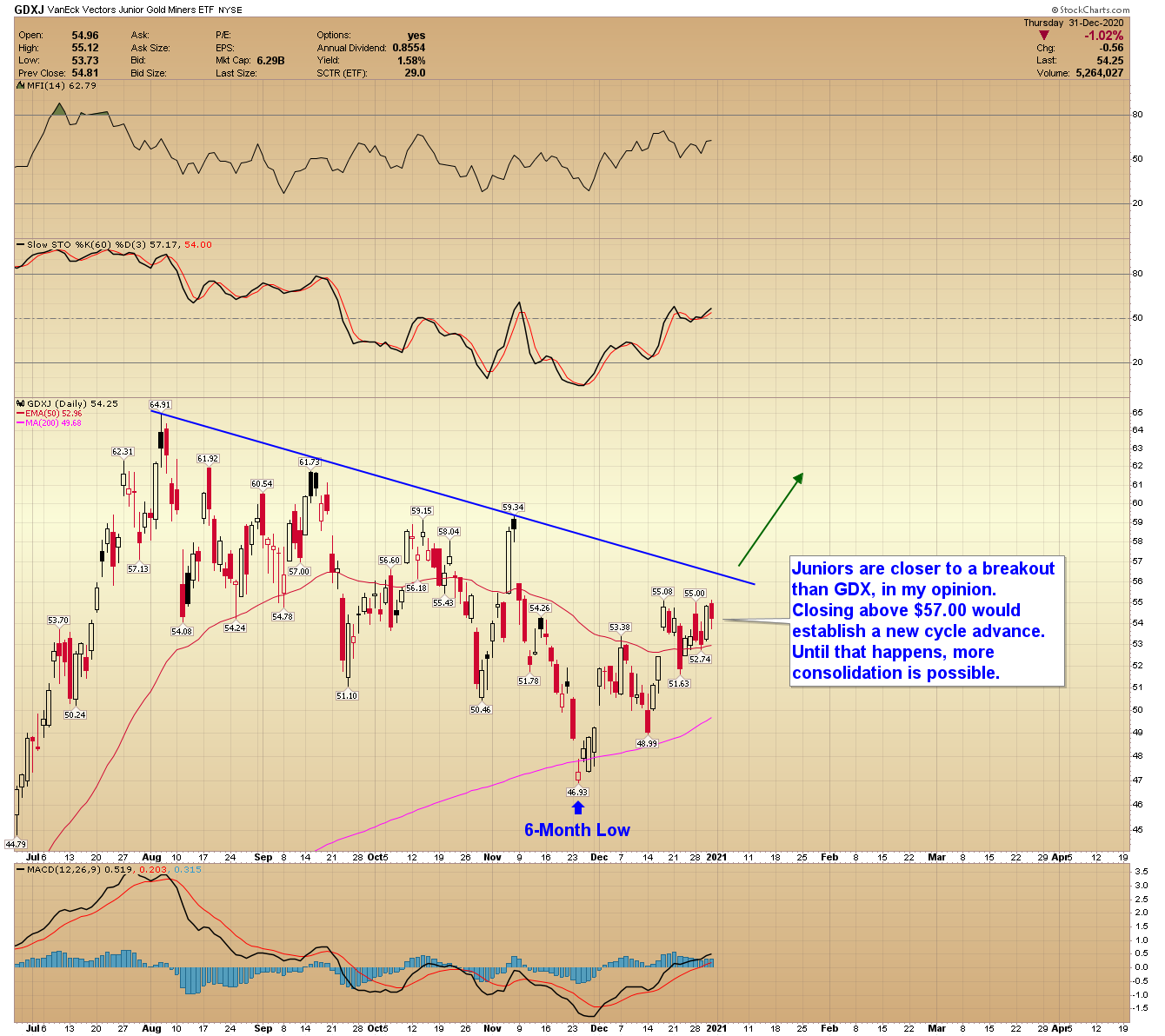 -XLE- If the economy is beginning to weaken, as I suspect, then we should see a pullback in energy prices. I remain bullish on oil over the next decade, but prices could consolidate into Q1 2021 as the economy stagnates. 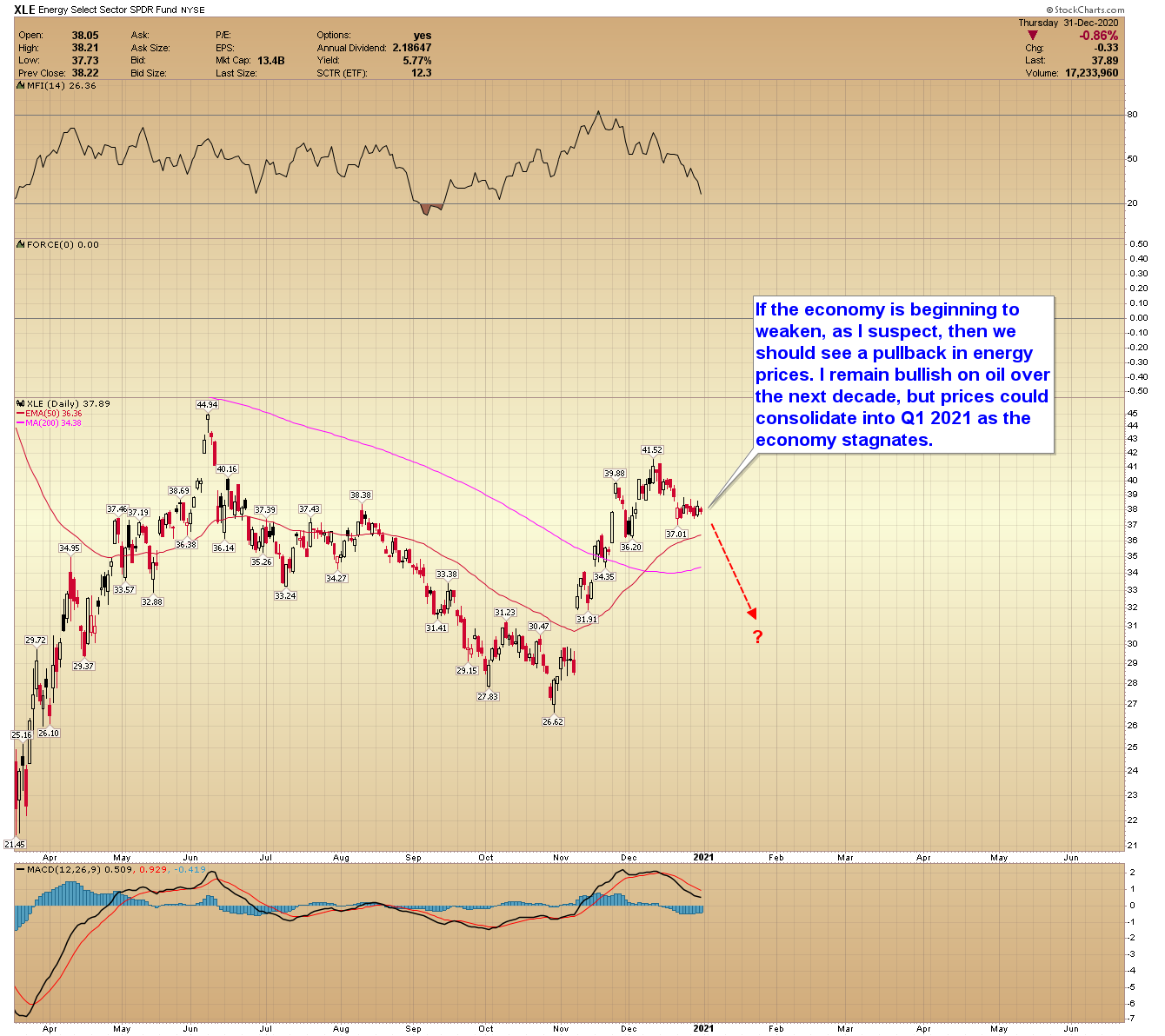 -SPY- Stock market gains have slowed significantly after the November elections and vaccine news. As I’ve said before, the good news seems to be baked in. I think we will see a correction in January. How severe? I’m not sure. Closing below 350 would open the door to 320. However, it would take a breakdown below 295 to support a double-dip recession. 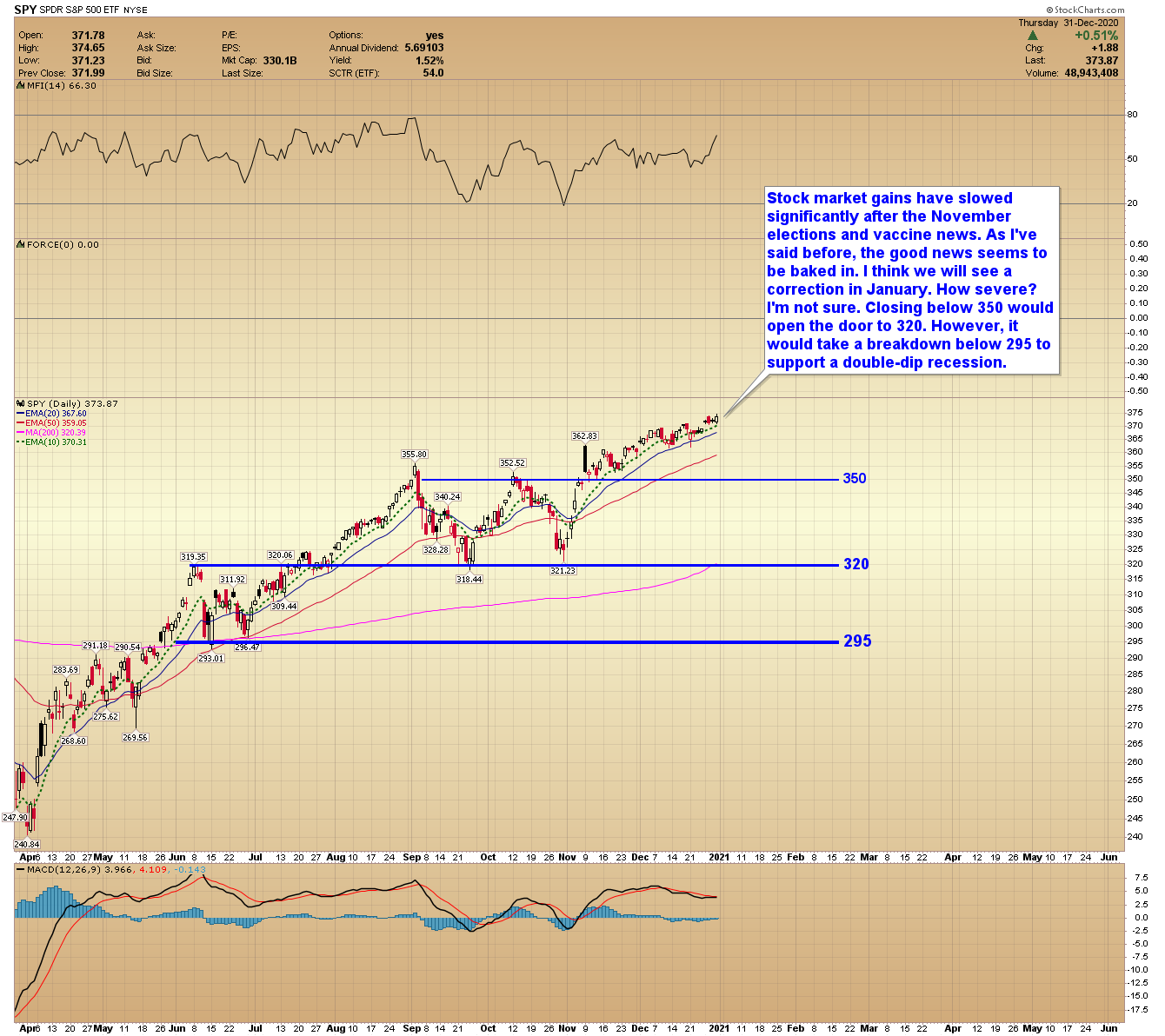 Note- If the S&P 500 continues to rally throughout January, we could be entering a bubble phase in the stock market.

This article was published Posted on December 31, 2020 in Categories Free Updates, Weekend Newsletters