Gold remains stuck in consolidation/correction mode, and this can be frustrating to some investors. At times like this, it is crucial to remain focused on the long-term goal. Our primary forecast still expects a minimum target of $8500, likely by 2028.

The financial crisis that began in 2020 is far from over. It is estimated that roughly 20% of all businesses at the end of 2019 are now closed permanently. In the chart below, you’ll see the gap between permanently and temporarily closed businesses has increased as lockdowns continue. Foreclosures of homes behind 90+ days are down -95.33% year-over-year, and total US foreclosures were down -82.03% in 2020. There is a massive backlog of evictions and foreclosures looming in 2021. Increased housing inventory in late 2021 could put pressure on housing.

Of the top 5-states that are 90+ days behind, three are in deep trouble. You’ll see year-over-year delinquencies are up roughly 800% in Hawaii, Nevada, and Alaska. These states are heavily dependent on travel and leisure.

Inflation expectations reached an all-time high in January 2021, according to the Bank of America Fund Manager Survey. The previous peak was in 2004, which corresponded with a robust 7-year uptrend in gold. 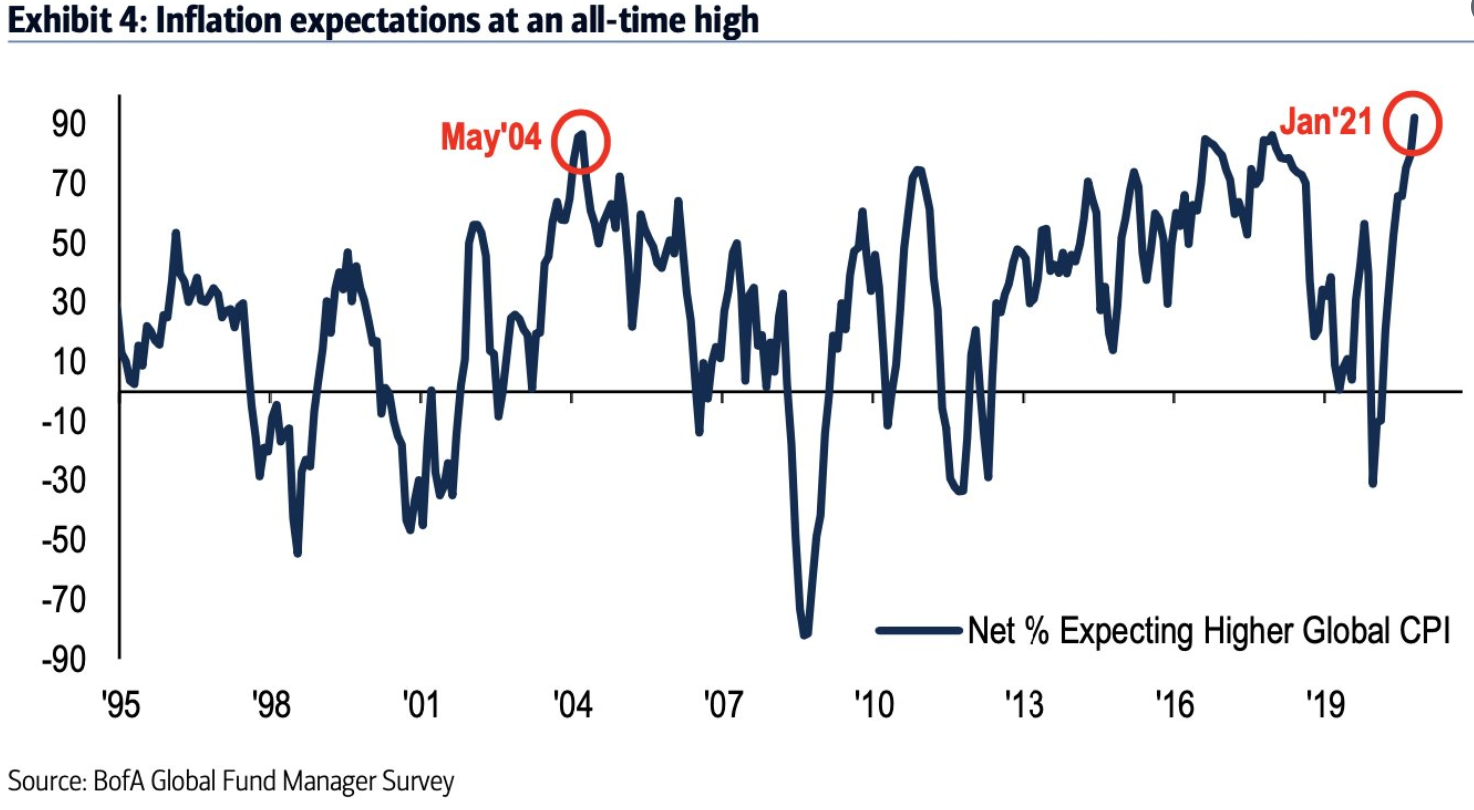 The gold cycle indicator finished the week at 57. We remain in cycle bottoming, and this continues to be a good long-term accumulation point.

GOLD PRICES LONG-TERM: As investors, we need to remain laser-focused on the big picture. I believe gold started a new 10-year advance in 2018 (similar to 2001). I expect a continued rise into 2028 with occasional pullbacks (like now) that should be bought aggressively. I have a minimum target of $8500. However, I think gold will well exceed that price objective.

At some point, probably in 2027 or 2028, I expect precious metals to enter a parabolic bubble. During that phase of the bull market, prices will rise day-after-day and month-after-month without stopping. The rise will likely be due to a collapse in confidence regarding government securities and dollar devaluation. My goal as an investor is to accumulate as many hard assets as possible leading into that bubble. The Educational Portfolio for Premium Members was designed for just that. 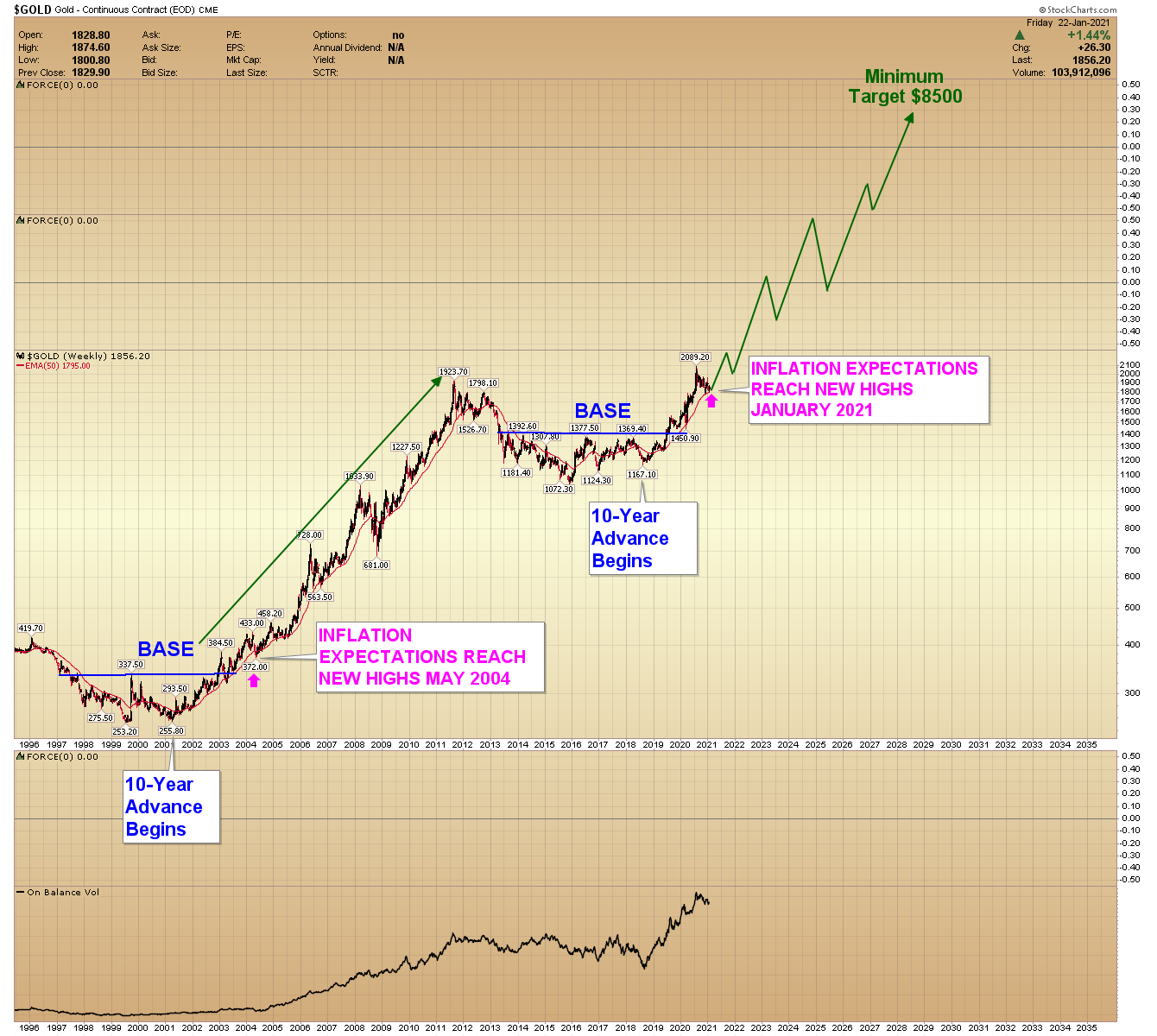 Note- The 2011 peak in gold ($1923) did not reach “bubble status” as buying was primarily from eastern investors. This time the buying will be from westerners as confidence in government plummets, and that could trigger a massive speculative bubble that dwarfs the 2001 to 2011 rally.

-GOLD DAILY- Gold prices continue to struggle after bottoming in late November. The gold cycle indicator remains in bottoming territory, which is a good time to accumulate long-term holdings. In the near-term, prices need to close above Thursday’s $1874.60 high to establish a mid-cycle low. A breakdown below $1800 would extend the correction phase. 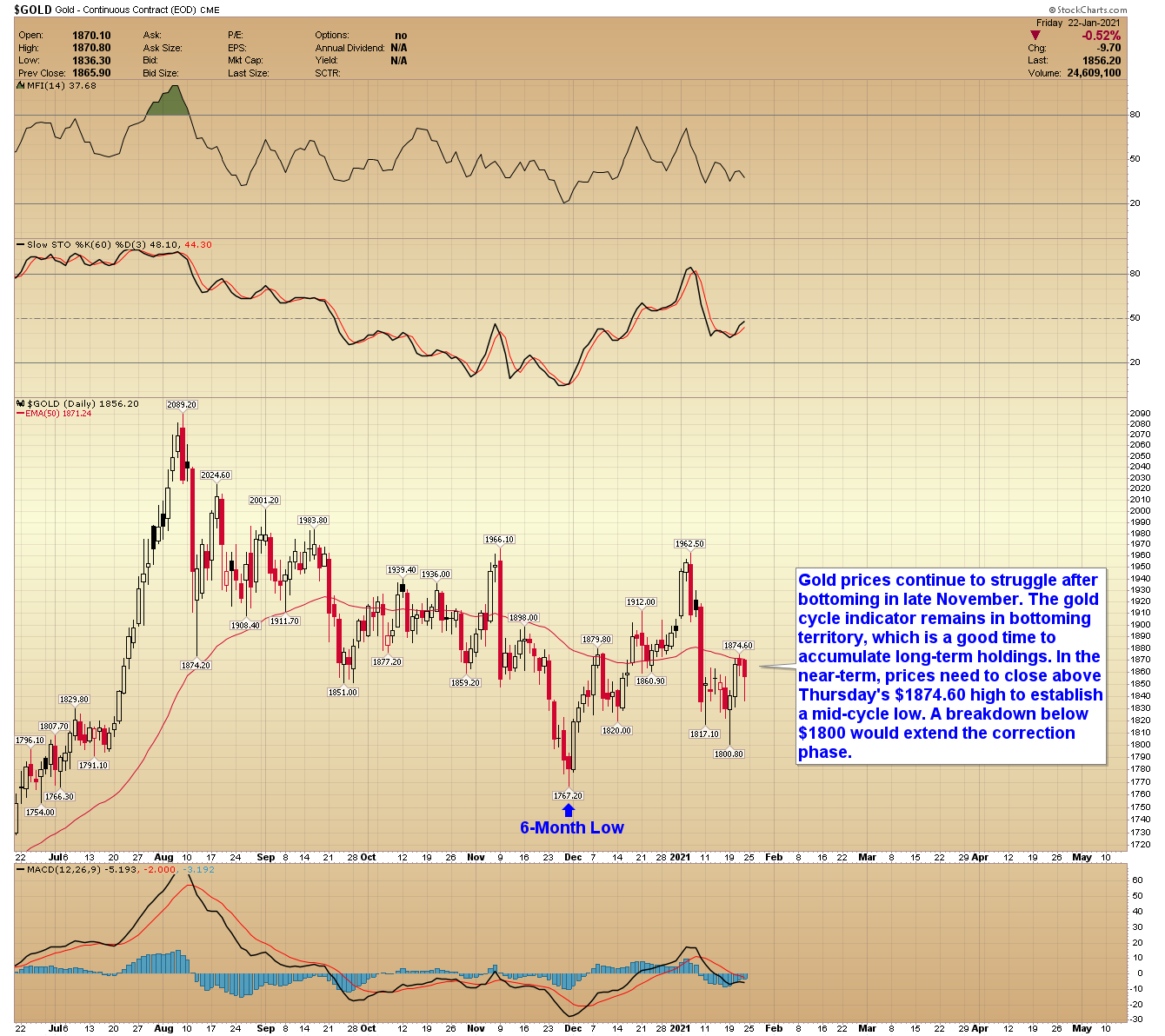 -SILVER- As long as silver stays above last week’s $24.04 low, it appears prices could be forming a rounded continuation pattern. A breakout above $30.00 in February or March would signal an advance to $35.00 to $40.00 by April/May. 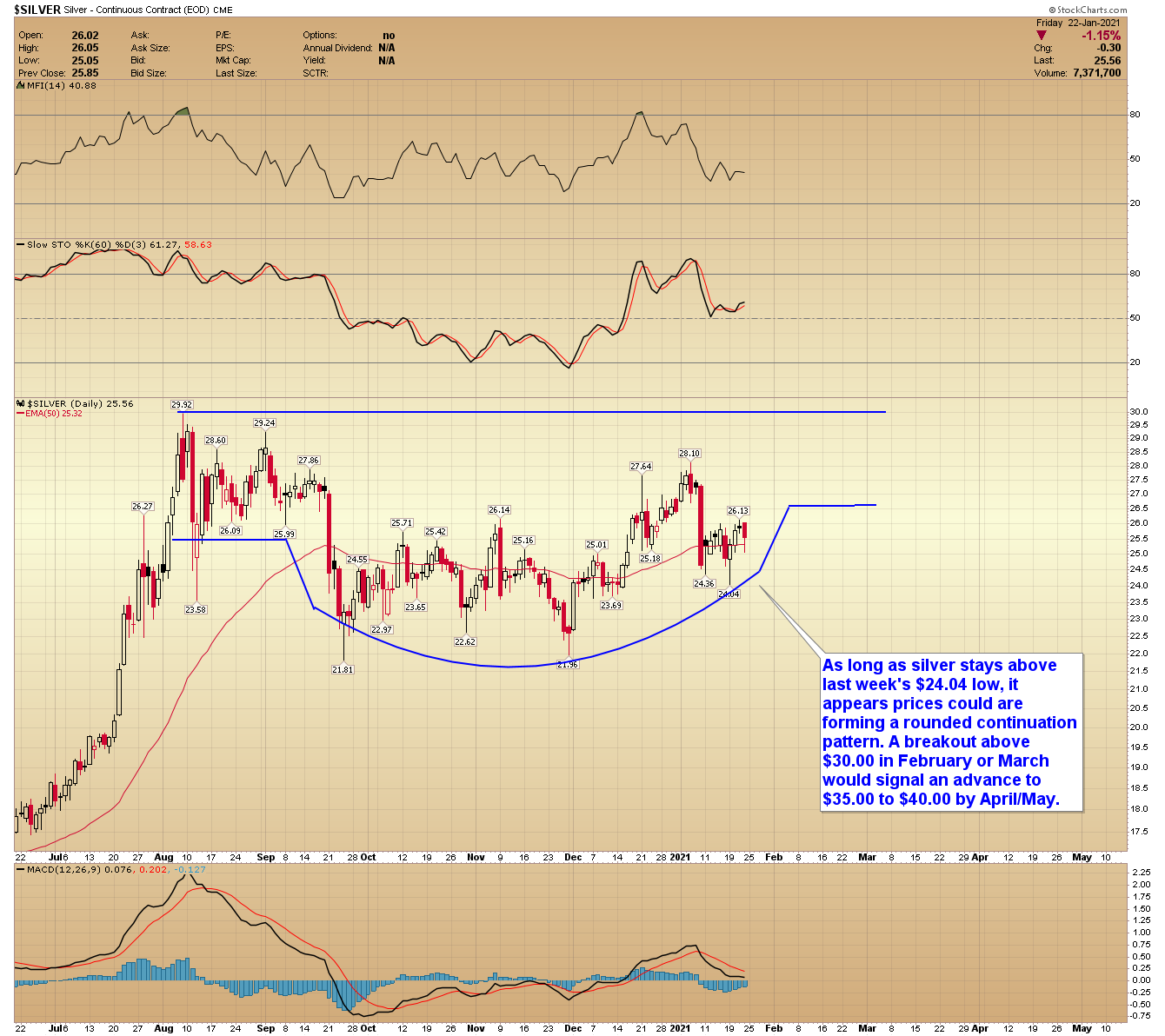 -PLATINUM- The underlying trend in platinum is strong, and I see explosive potential once prices get above $1200. At nearly $750 below the price of gold, savvy investors are starting to take advantage of the price disparity. In the meantime, a pullback is possible with support surrounding $1050.

-GDX- The longer-term trend in gold miners is pointed decisively higher. If gold reaches our minimum target of $8500, I think GDX could rally 10X from today’s prices. The medium-term trend remains in consolidation/correction mode. A close above or below last week’s extremes is needed for direction. If prices break lower, I would expect a bottom in early February. 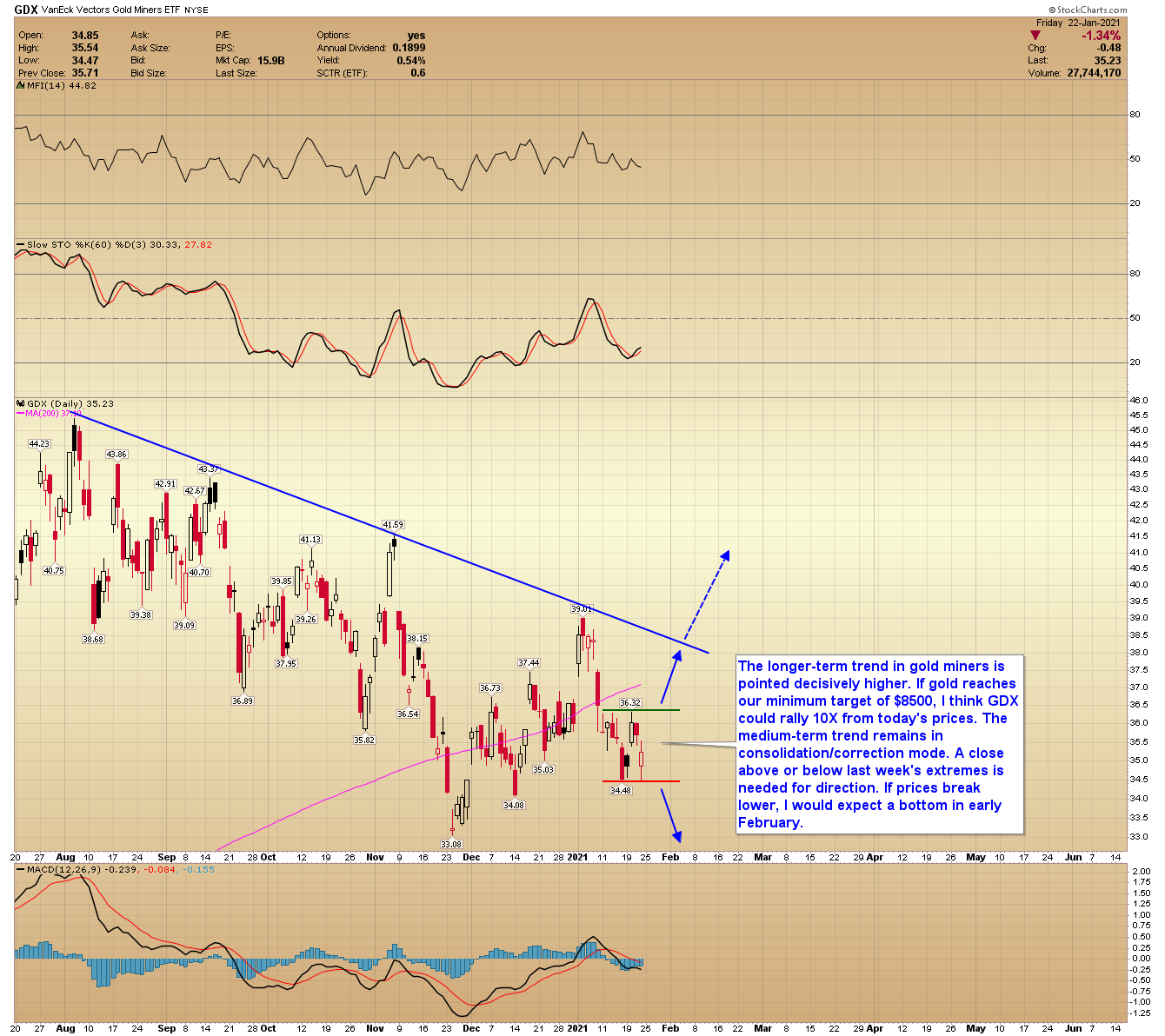 -GDXJ- Juniors are trying to reverse the multi-month downtrend. The long-term potential is immense, and I think prices could rally 10X by 2028. I would suggest focusing more on long-term accumulation and less on short-term trading. 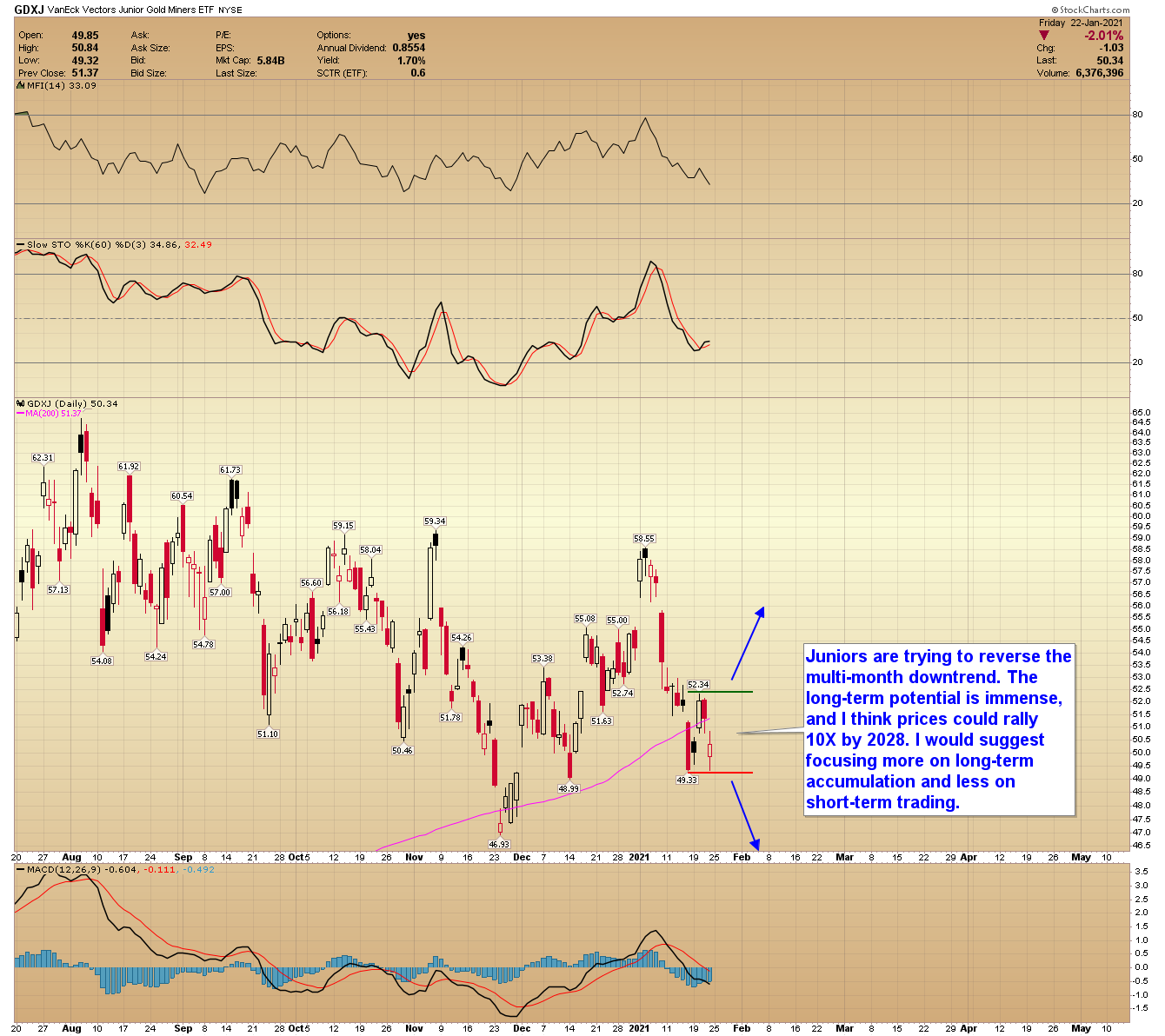 -SPY- Stocks are in the upward sloping trend channel, and I think a sharp 10% to 15% correction is possible in February or March. The likely target would be the rising 200-day MA. If prices do correct as forecasted, I think that would be an opportunity to buy energy stocks. 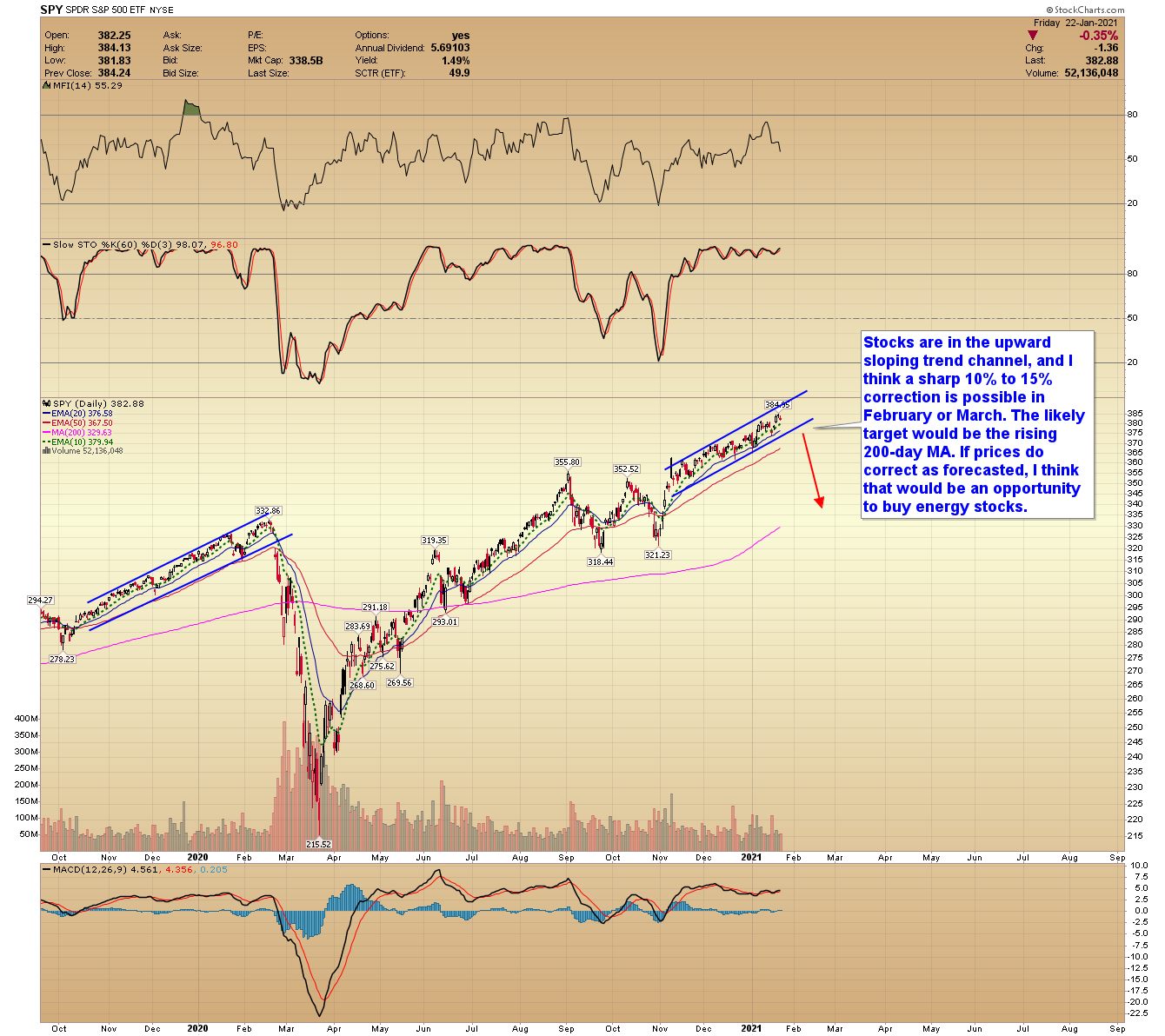 -XLE- The initial rise off the October low appears complete, and I believe prices are nearing a pullback. Progressive closes below $41.00 would confirm. Initial support arrives at $37.00. Medium-term support would be $34.00, and in the event of a sharp pullback, prices could reach $30.00 – $32.00. I remain very bullish on energy. 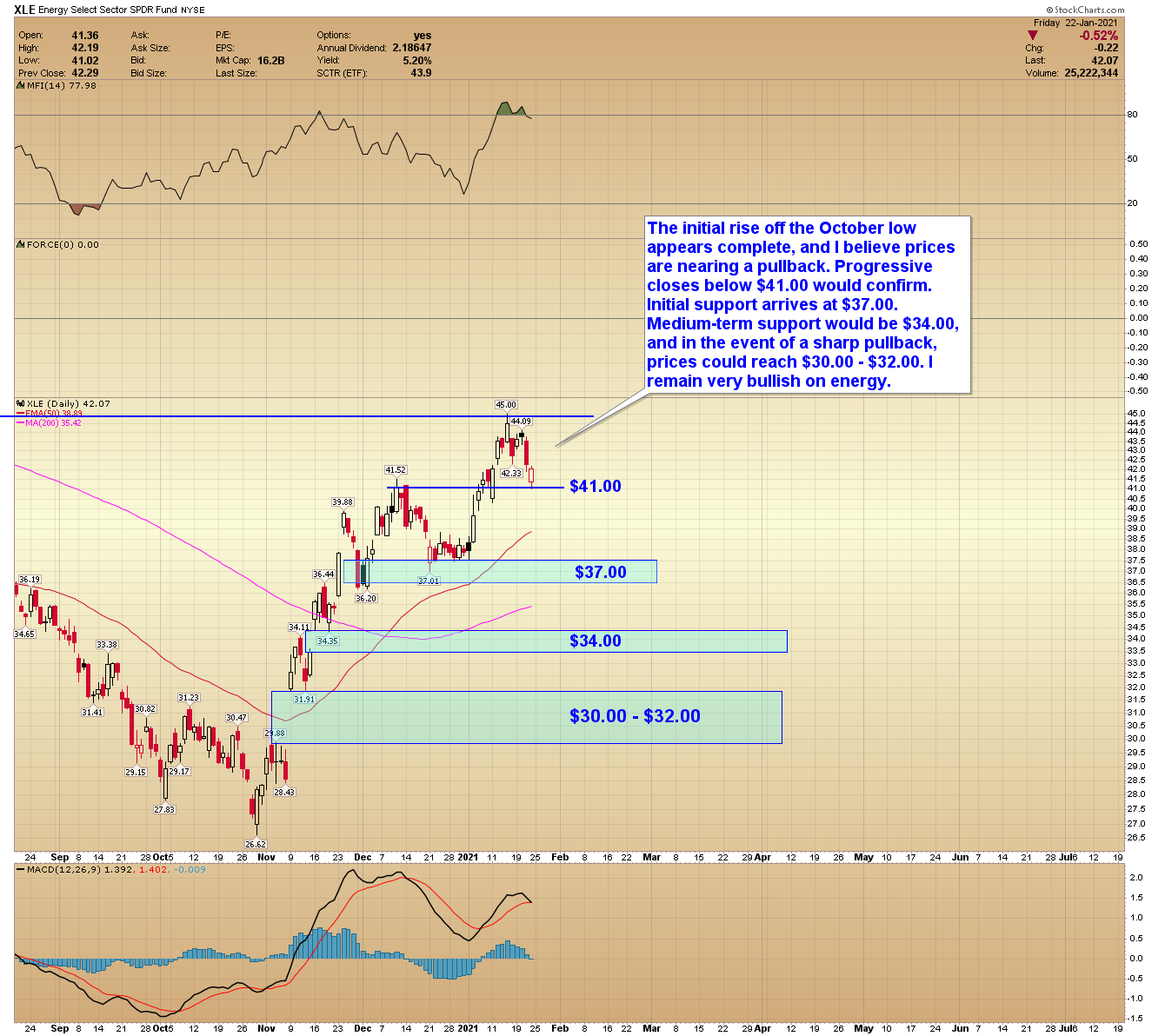 This article was published Posted on January 25, 2021 in Categories Free Updates, Weekend Newsletters