The Final Move Lower In Gold

It’s my belief that gold, silver and miners topped recently or will so this week, and then they will begin the decline into what will become an incredible buying opportunity later this year. Nothing is set in stone, but nevertheless, my indicators advise that it is perhaps too early for “the” bottom in precious metals and what we recently witnessed was an impressive counter-trend rally.

The Human Factor
A few weeks ago I mentioned how market psychology and human emotions combine to affect price, momentum and trend. I explained how market methodology attracts maximum participants before reversing course. Those that missed the powerful move out of the November low have grown increasingly apprehensive as prices climb higher and higher, refusing them the opportunity to commit. They anxiously wait to enter their positions, and every tick higher becomes unbearable. After seeing prices continuously pull away from them, they reach a point of recklessness. The angst of missing out overwhelms them, and they hastily buy with both hands. Once they buy prices continue higher momentarily, and they rejoice in their decision, but it is short lived. The trend reverses and prices in due course sink to levels they once dreamed of.

What’s Next
Needless to say, this move in gold pressed the limits of time and price from a technical standpoint. Nonetheless, prices stayed within the parameters classifying a bear market rally. Regrettably, many were likely tricked into thinking “the” bottom had arrived, and they will now watch as prices drop to what will ultimately become an ending bear market bottom.

I would like to see precious metals and miner’s follow-through to the downside later this week as validation, it appears the Friday Update is close to playing out. Prices will likely drop from these levels to a spring low (see chart below), produce a failed rally and then drop into what will become the final bear market low later this year. We will need to see how the structure develops and where the intermediate low lands to determine potential target areas for the ultimate low. 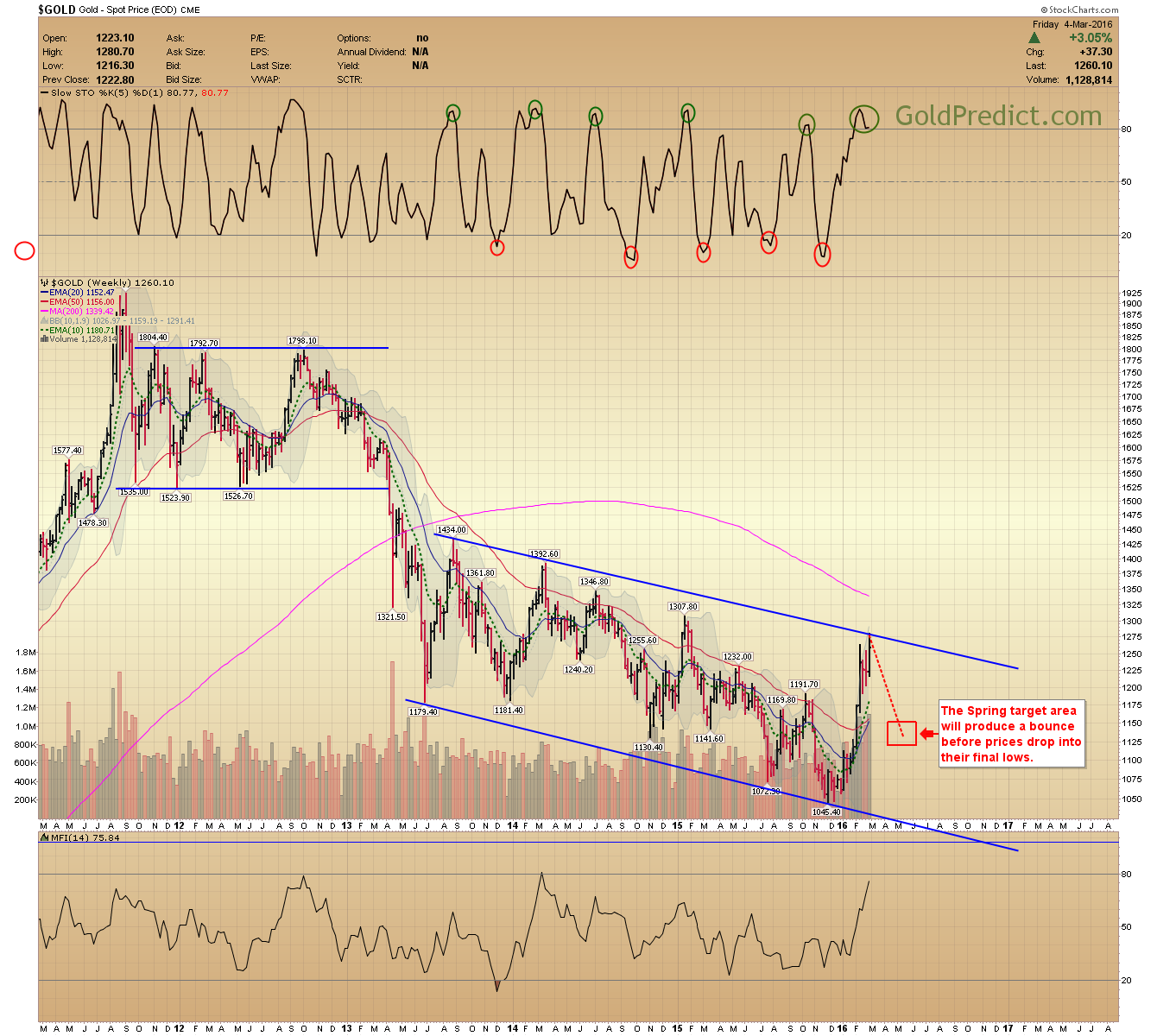 This final move lower could manifest in several ways. As a technician, I contemplate an abundance of scenarios and how each might affect the individuals involved. One possibility I’m weighing is a relentless grind lower from the current levels. Investors buy as prices continue to decline, thinking this is a routine pullback. However, the rallies fade and prices extend lower. If the $1,000 level is violated, expect a sharp drop that will ultimately lead to capitulation, that sequence will declare the final low.

The New Bull Begins
Once we bottom later this year prices will begin a multi-year rally that will last several years. Widespread currency devaluation will breathe life back into the precious metal markets as global investors rush to safety. Gold will rise higher and higher once the $2,000 level is defeated all bets are off; speculation and fear will then drive price discovery.

Expect wild swings and unrelenting moves higher, picking the exact top will be virtually impossible, but some will try in folly. It’s best to choose a strategy of selling parcels into extreme strength and being satisfied with your profits; fortunes will be built.

Silver will outperform gold with the potential of real supply shortages causing genuine panic. The quality government issued silver coins will be difficult to find, and their premiums will be extreme. As prices soar into the parabolic finale, find assets that are undervalued to change into. I plan on buying quality dividend paying blue chip stocks.

Keeping your emotions at bay and using a disciplined approach will produce success. Highly leveraged trading vehicles are alluring but can ultimately decimate your account, use them cautiously. Risk management and proper position size is the key to long-term trading achievement, learn them well.

Final Note
It is not uncommon for sectors to create a divergence at major turning points. Silver prices look poised to drop below $13.62, but gold, miners or both may stay above their bear market lows displaying a form of relative strength. Miners often lead metals, so this phenomenon is more likely to occur in them.

This article was published Posted on March 7, 2016 in Categories Free Updates