Gold Topped And Is Dropping Into The Spring Low

In my March 7th Article “The Final Move Lower In Gold” I briefly discussed the Human Factor and how emotions drive trends. This article will delve into that space a bit further, touching briefly on capitulation and finishing with a gold price forecast.

Controlling Emotions: Many times I’ve addressed how emotions can become our worst enemy when investing, and that holds remarkably true in precious metals. Investors buy gold and silver as a store of value and as a protection against governments. They invest wholehearted and are sometimes overzealous about their beliefs. Unfortunately, this often makes them captive to their emotions and likely to error in judgement. A prudent investor carries an opinion but is not overconfident regarding a particular outcome.

Experience has taught me that whenever I believe so strongly in something, and I don’t ever consider the possibility of being wrong, I’m most definitely mistaken. That type of unchecked confidence shades the truth blinding individuals to obvious counterpoints. This behavior is often displayed at market tops and bottoms, becoming the textbook contrary indicator.

Here’s an example of a contrary indicator in the sports world. Just before the 2006 MLB World Series (Detroit vs. St. Louis), I remember seeing a map polling participants in whom they expected to win the World Series. Missouri was the only state on the map to pick St. Louis to win, it was at that moment I knew Detroit fans were in serious trouble; Detroit only won one game.

Capitulation: In the example above Detroit fans eventually reached a point of acceptance, first individually and then collectively as they realized their team would not win. The process leading up to that point is akin to the five stages of grief (denial, anger, bargaining, depression and acceptance).

Market capitulation manifests in a similar fashion. After a long period of falling prices, market participants continue to hold fast expecting a turnaround. An occasional glimmer of hope keeps spirits lively, and the believers are drawn to every professional calling for a market bottom. In due course, critical price levels are breached, a news event or policy decision sends prices tumbling; panic selling begets more selling, and capitulation grips the market. The once overconfident investor reaches the point of despair and market sentiment is assuredly reset.

Next, I would like to explore the charts with you. I’m an old school chartist and prefer to start with the Big Picture view and then zoom in with weekly and daily charts.

The Monthly chart of gold shows two parallel consolidation fields; the current zone has a downward bias. The first area broke down leading to a sharp selloff; this pattern may breakdown in a similar fashion. If it does that will likely become the capitulation we’re missing. There is a clear target approaching when the 200-Month moving average intersects the 1980 bull market peak of $873.00. 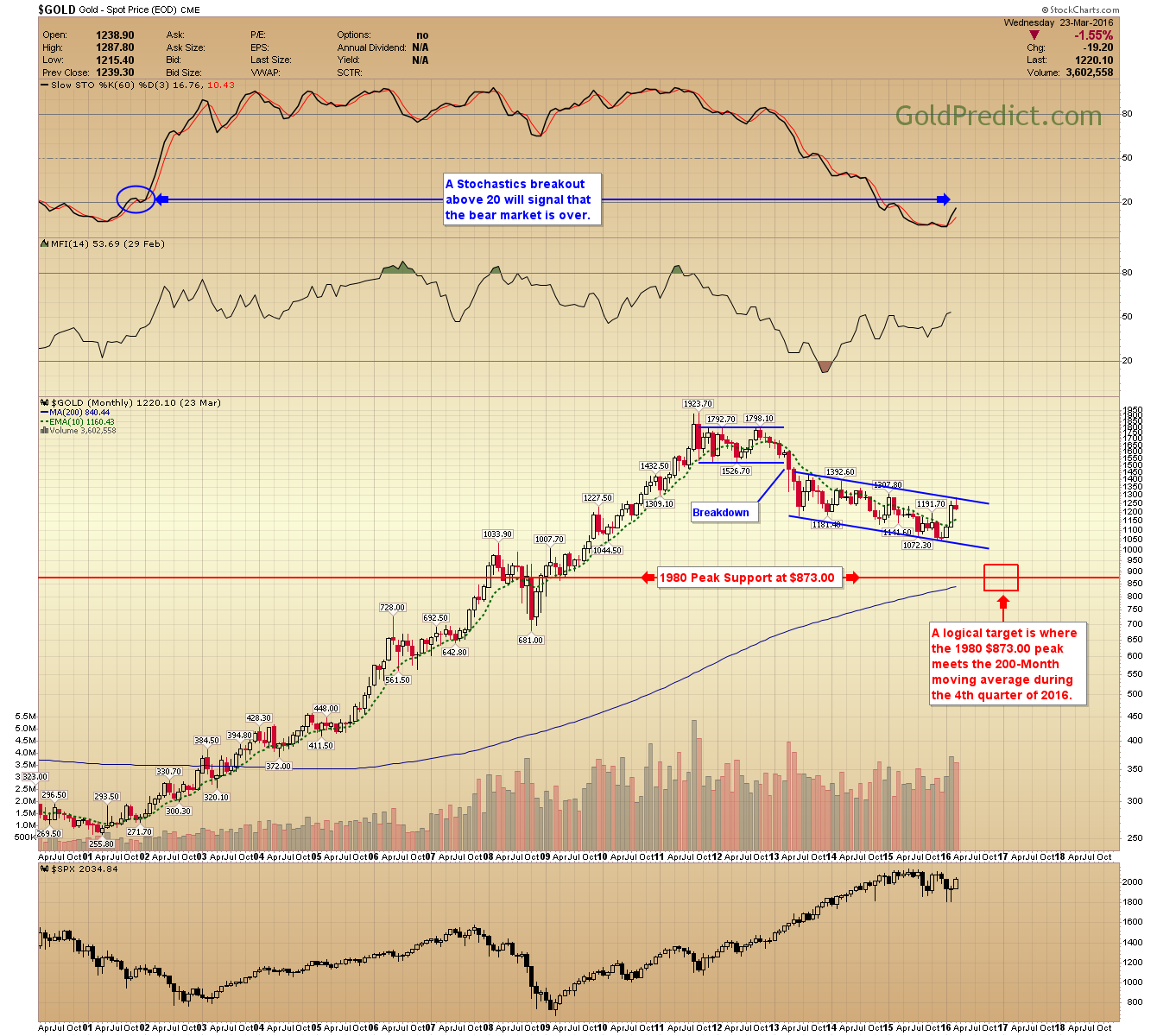 The Weekly chart zooms in to see better the current downward sloping trend channel. Prices diligently attempted to break above the upper trendline but in the end failed. Prices are now dropping to the target area below and should arrive between late April and mid-May; how prices recover out of that low will tell us a lot about the future. 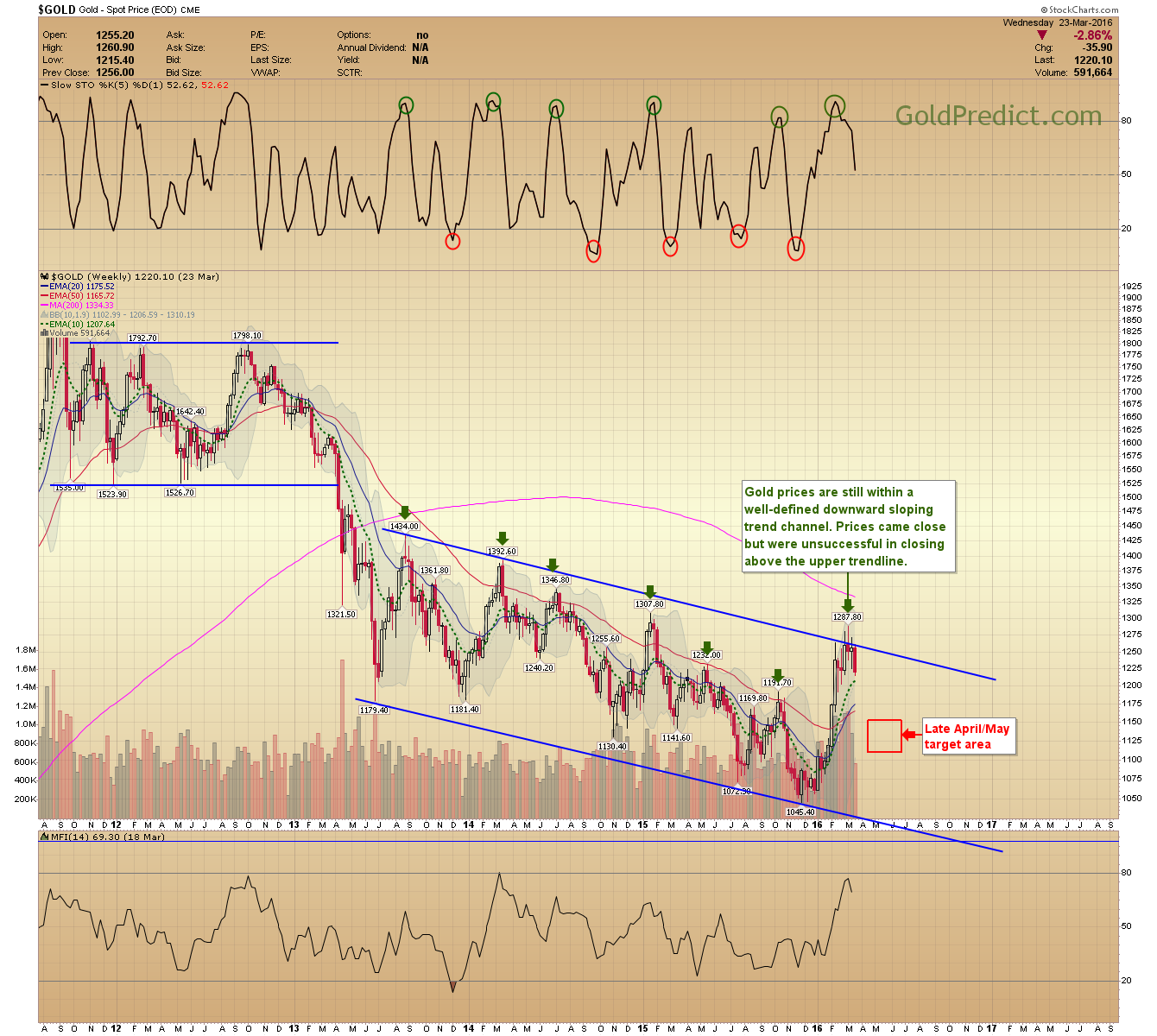 Lastly is the Daily chart of gold; here you will see the Members  March 4th update and Color Change were nearly spot on, and the intermediate cycle topped just a few days later. The $1,226.00 secondary low has been taken out, and prices are descending to the target area. I will tighten up the spring target window as the price structure develops; the 200-day moving average seems like a suitable stopping point. 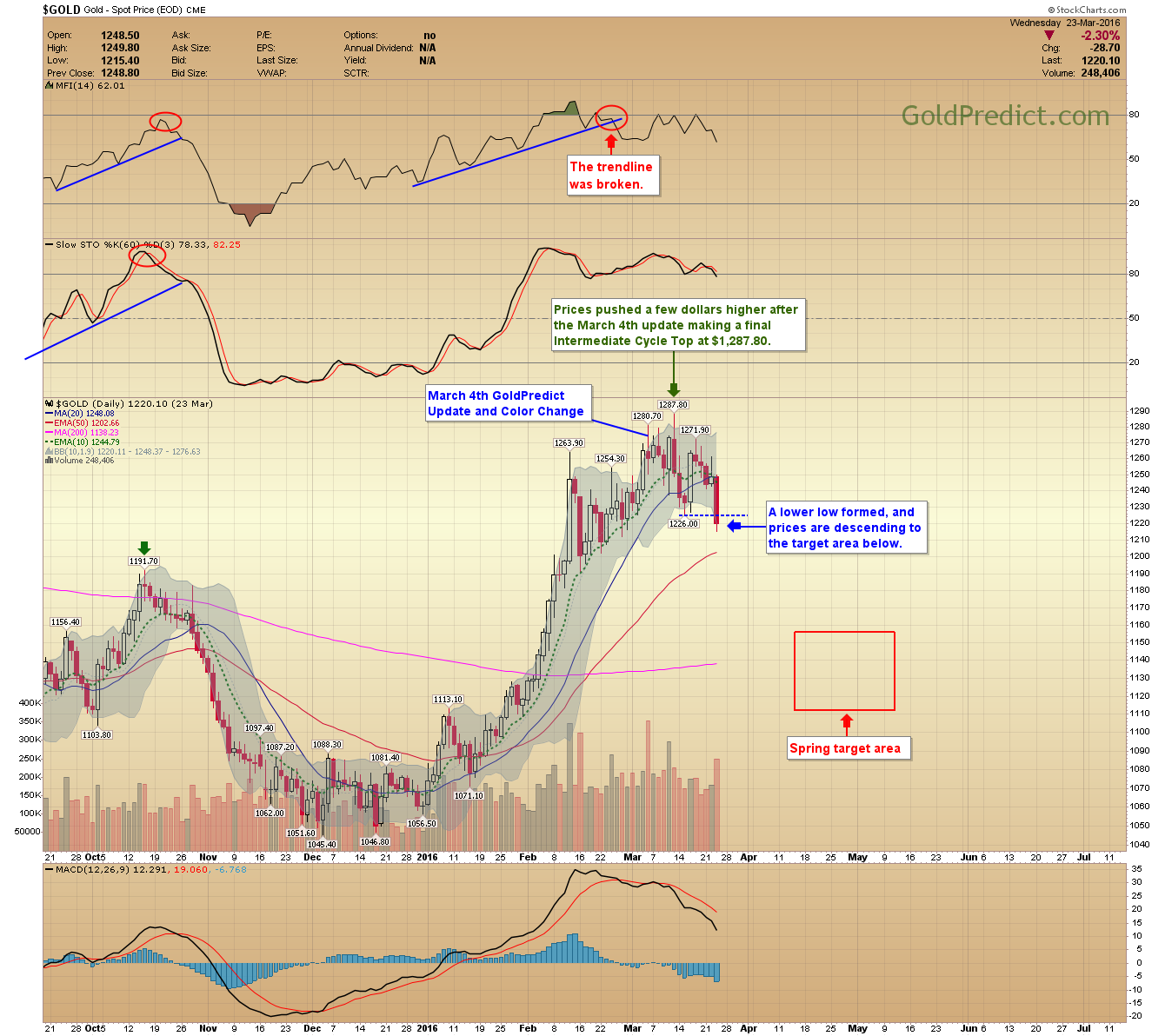 Alternate Scenario: If prices bottom this spring and then make a higher high above the March 7th $1,287.80 top, I will abandon by bearish view and switch to a bullish posture. Otherwise, gold prices aren’t expected to bottom until late this year or in January of 2017.

This article was published Posted on March 25, 2016 in Categories Free Updates