Investors have the tendency to get distracted by the daily market movements and short-term noise. Occasionally, I like to step back and evaluate things from a big picture perspective in an attempt to keep myself grounded. Last week I covered the potential of a $500 silver target, now I’d like to look at potential debt issues and some long-term gold charts.

It’s my belief that the world’s debt problems were never truly fixed following the 2008 crisis, and there are still significant problems on a global scale. The US has seen household deleveraging, and debt levels dropped from a record 13.35 trillion in Q2 of 2008 to approximately 12.40 trillion in Q1 of 2013. Unfortunately, that’s less than a 10% decrease, and levels are now back on the rise.

Corporate debt is higher than it was during the last crisis and servicing this debt may become a tremendous issue in the future as interest rates begin to tick up. Gerard Minack of Minack Advisors writes “One success of Fed policy has been to encourage an increase in corporate leverage. Unfortunately, this increase in debt has not fueled strong investment. Instead, it’s funded higher dividends and share buy-backs. Good for investors, not so good for the economy. With profits at all-time highs, and effective interest rates at all-time lows, this debt load in not causing credit stress. However, it is a potential problem in the next downturn. Last downturn households found their debt burdens too high; in the next downturn in may be corporates’ turn.”

Governments around the world used the readily available water supply (monetary policy) to quench the 2008 fires temporarily but now they find themselves with little extinguishing agent remaining for the next firestorm. I’m not exactly sure how they will respond to that crisis, but dramatic and widespread currency devaluation seems likely.

The Yearly Chart of Gold depicts a large Bull Flag developing; technicians add the height of the flagpole to the breakout point for potential targets, suggesting $10,000 gold. 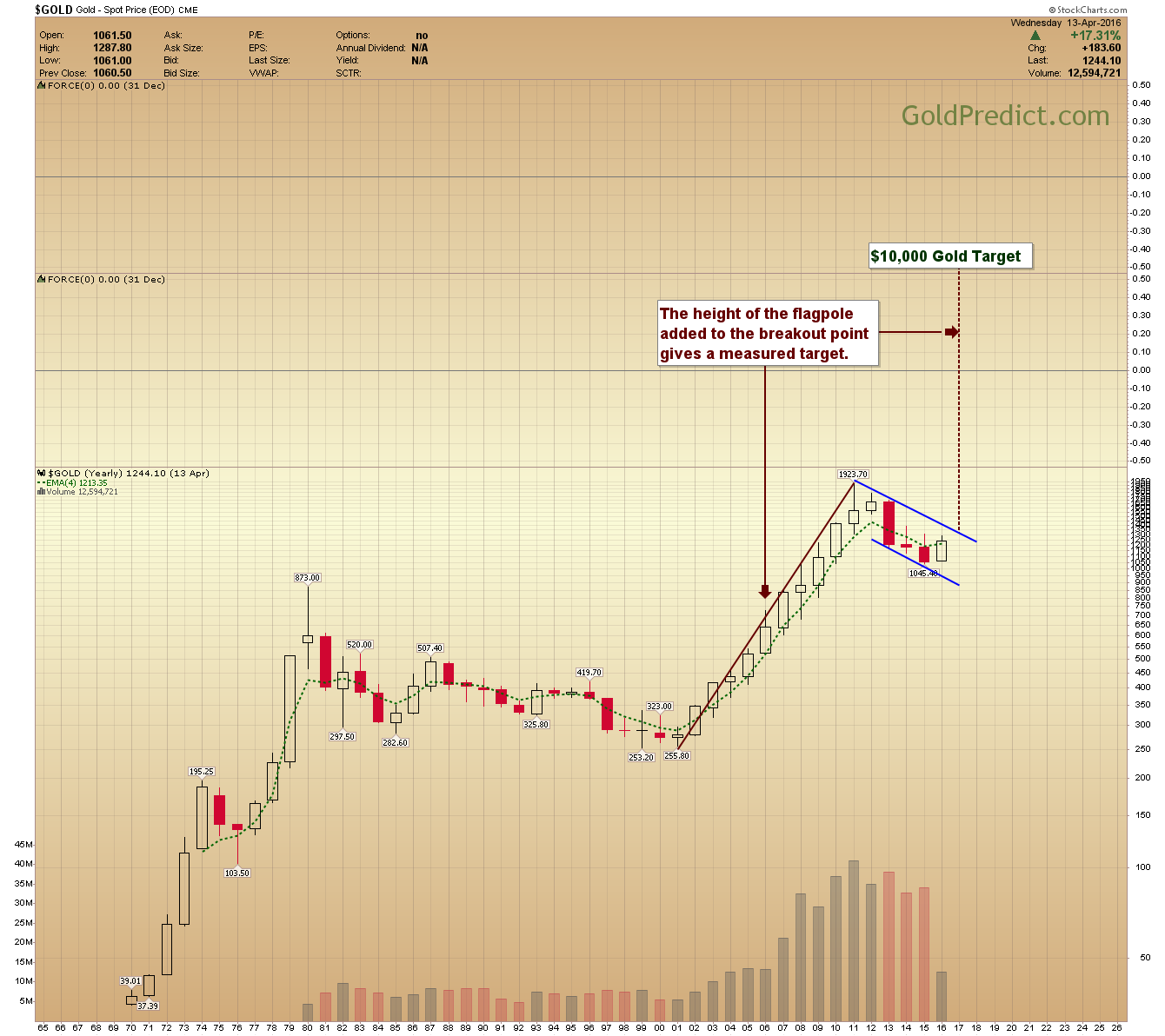 The Monthly chart of gold shows prices challenging the long-term 48-Month moving average; a solid close above that level will signal the 8-year cycle has bottomed and that the Gold Bull has returned. 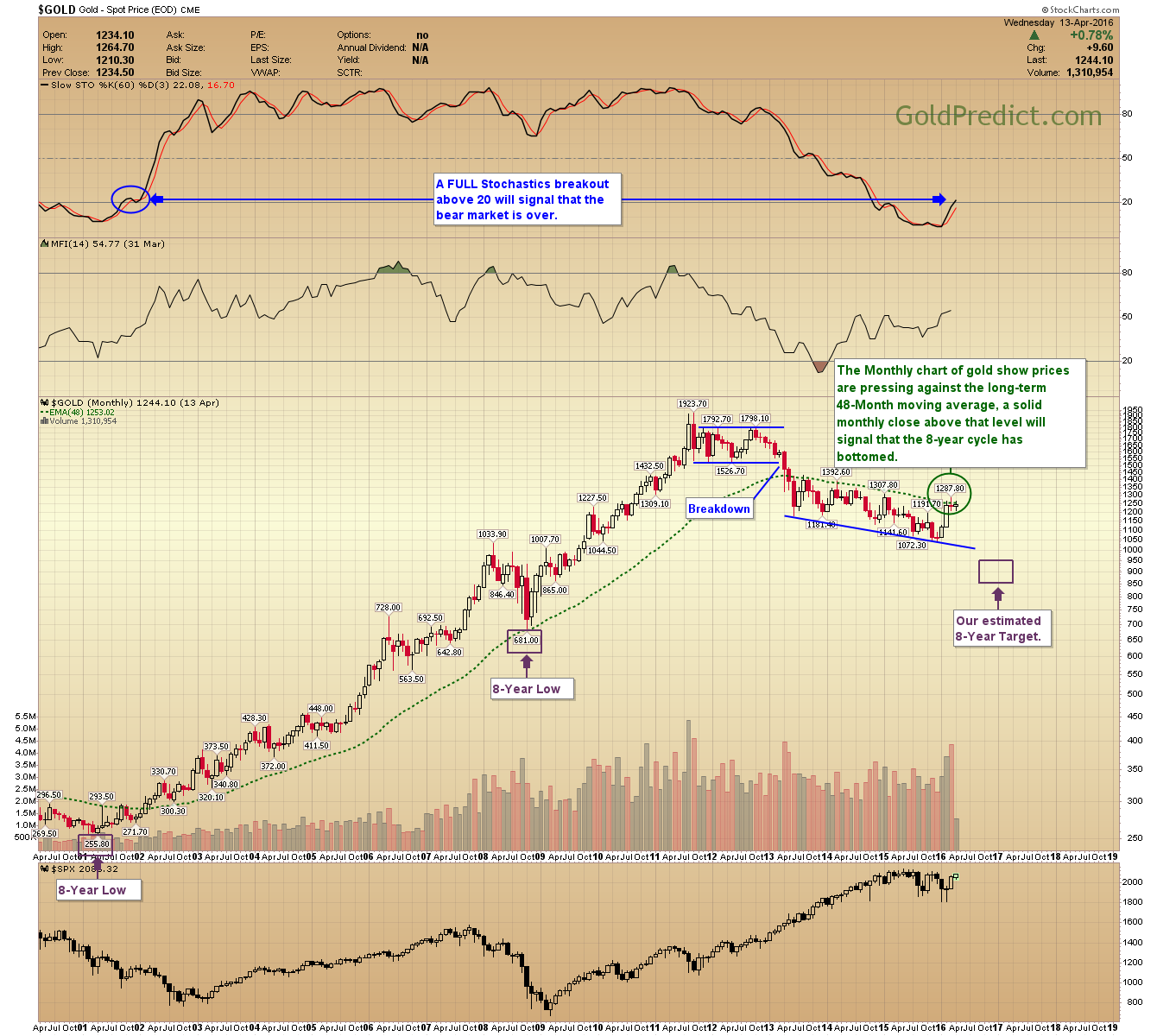 The Daily chart of gold reveals a head and shoulder topping pattern presenting a May price target of around $1,130 for a 6-month cycle low. NOTE: What happens out of this spring low will determine if gold prices bottomed or if there will be a final push lower. 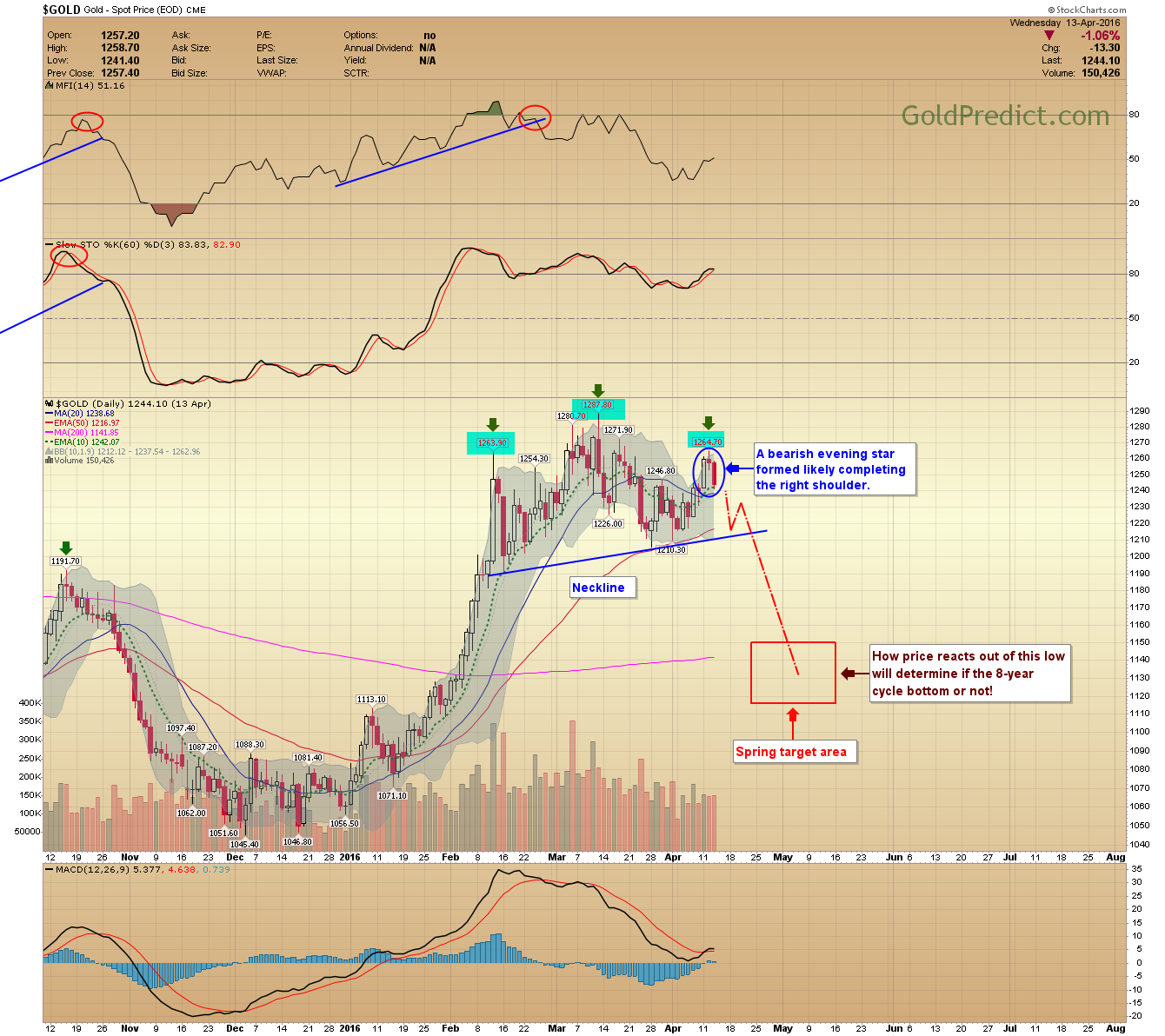 We believe the $1,045.40 low last year could be a false bottom, and that the recent rally, though impressive, may be an elaborate trap before moving lower. Could we be wrong? Absolutely, and If prices reach certain benchmarks supporting the 8-year low, we will happily reverse our position. Until that point, we must remain vigilant and preserve capital.

I direct the following to those individuals that are using too much leverage in precious metals. Ask yourself, what will happen if gold drops $400 from here or if your beloved NUGT or USLV crash 70+%, will you have any capital remaining for the real bear market bottom, if it is indeed still ahead? Leverage destroys accounts! If you’re overleveraged and think the bear market bottomed, please take a moment to pause and reflect? There will be plenty of time to make money once the bottom is confirmed but if you get wiped out now, you will be watching from the sidelines as gold prices climb ever higher.

This article was published Posted on April 15, 2016 in Categories Free Updates