I learned a long time ago that pride and arrogance prevent profits. Consequently, I would much rather make money and preserve capital than always be correct. Experience has also taught me that when my analysis is challenged at every turn, then the trend has possibly changed. And therefore, I need to stop fighting it. We may be approaching that point in my work now. This article will look at a few reasons why I haven’t fully committed to the recent moves higher in gold…and what developments will change my mind.

Did Gold Really Bottom In 2015

Our core analysis revolves around the 8-year primary cycle in gold. We found that these major turning points occurred regularly before or just after a US Presidential election every 8-years. It’s believed prices commit to these lows, once it’s become apparent who the next President will be, and markets can then adjust to policy expectations.

The majority of these 8-year cycles bottomed 1-4 months after the Presidential election, with few bottoming slightly before; the earliest on record arrived 2-months prior. For these reasons, the current 8-year cycle wasn’t scheduled to arrive until sometime between August of 2016 and February of 2017. Is it possible the 8-year cycle bottomed 11-months early? Anything’s possible, but that would indeed mark the shortest 8-year cycle ever recorded and thus expressly unlikely. 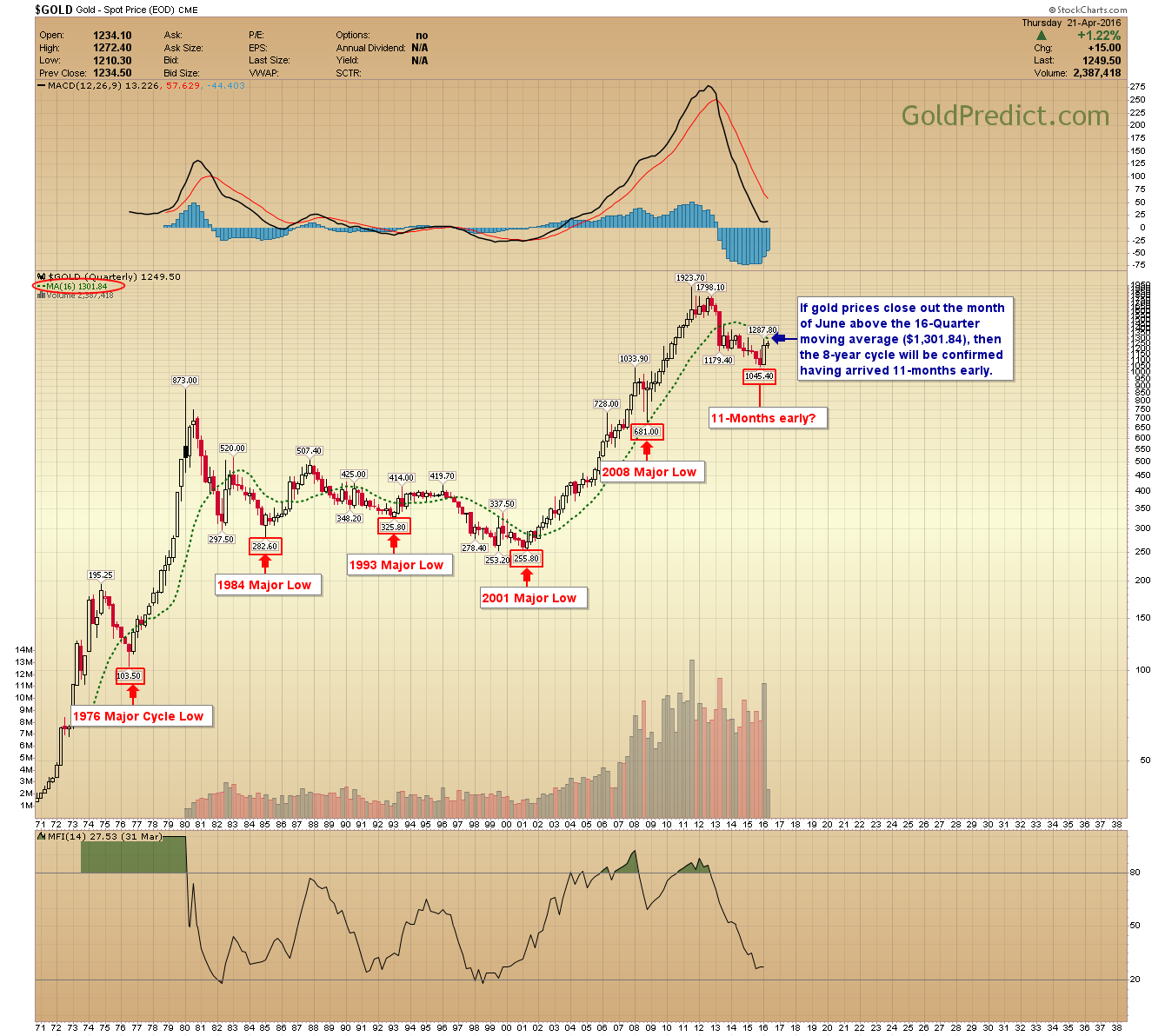 Investing has risk; a seasoned trader finds the odds and stacks them in his/her favor. Statistically speaking it was doubtful that the primary (8-year) gold cycle arrived 11-months prematurely. Therefore, we considered the move out of the December low a potential trap, foresaw to mislead participants before a final move lower. However, if gold prices manage to close the quarter (end of June) above the 16-Quarter moving average ($1,301.84), then the 8-year cycle will be confirmed and labeled as an early arriver.

The Dollar Is Key

As long as the US Dollar remains the reserve currency of the world, its value will be critical to gold prices. The Dollar exploded higher in 2014 reaching a high of 100 in 2015. Prices have since consolidated that move…and may be ready to surge higher again and break out above the 100 level. If they don’t head higher quickly, then prices will crash from a double top (a weekly close below 92.50 will confirm), and a multi-year price decline will begin. Our theory supports an ending move above 100 before topping, but this hypothesis is being severely tested. 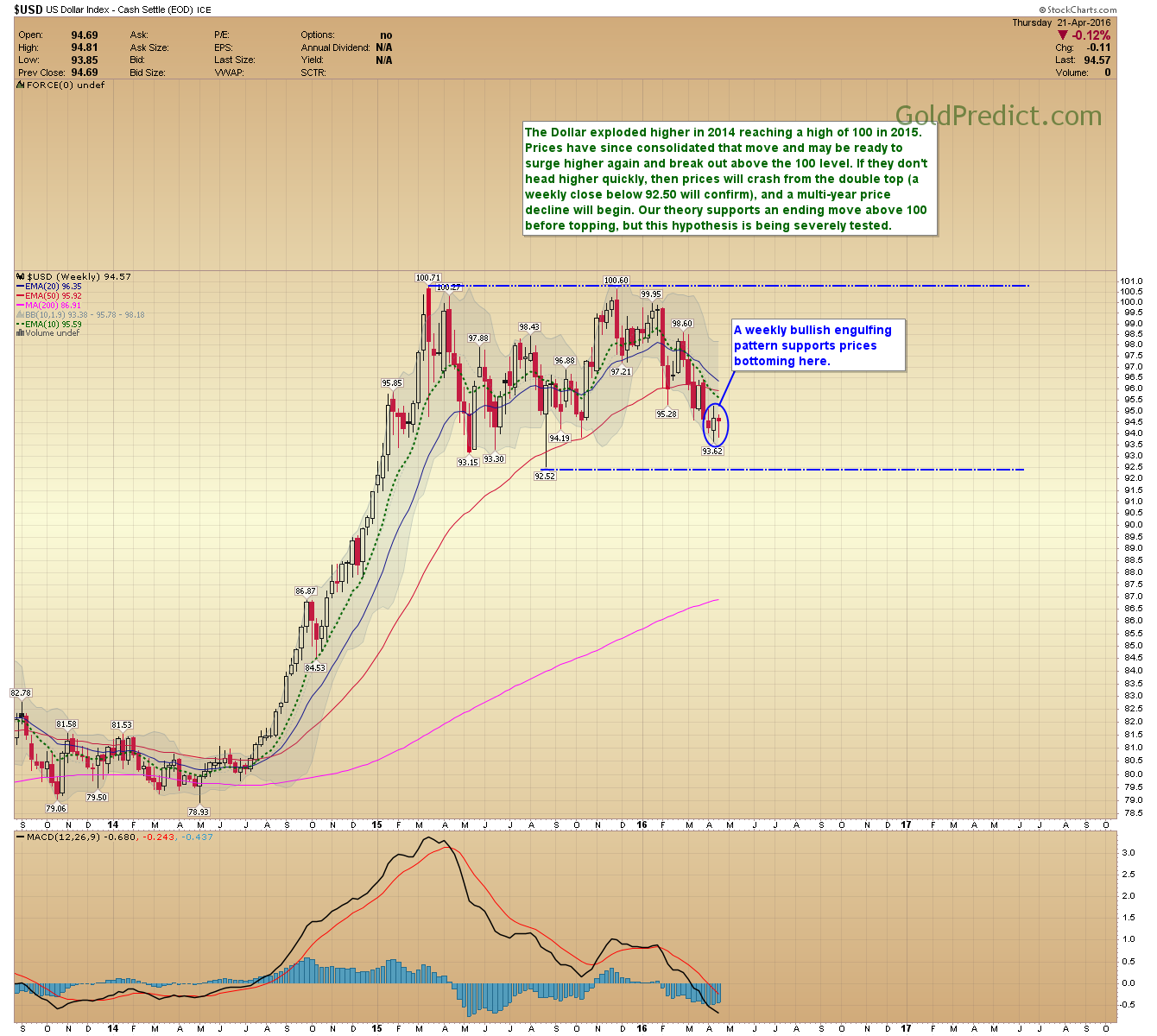 Looking at the daily chart of the US Dollar, we see that prices are forming a descending wedge pattern. When prices breakout from these patterns, it’s often explosively upward. I’ll be monitoring the MACD at the bottom of the chart for signs of completion. 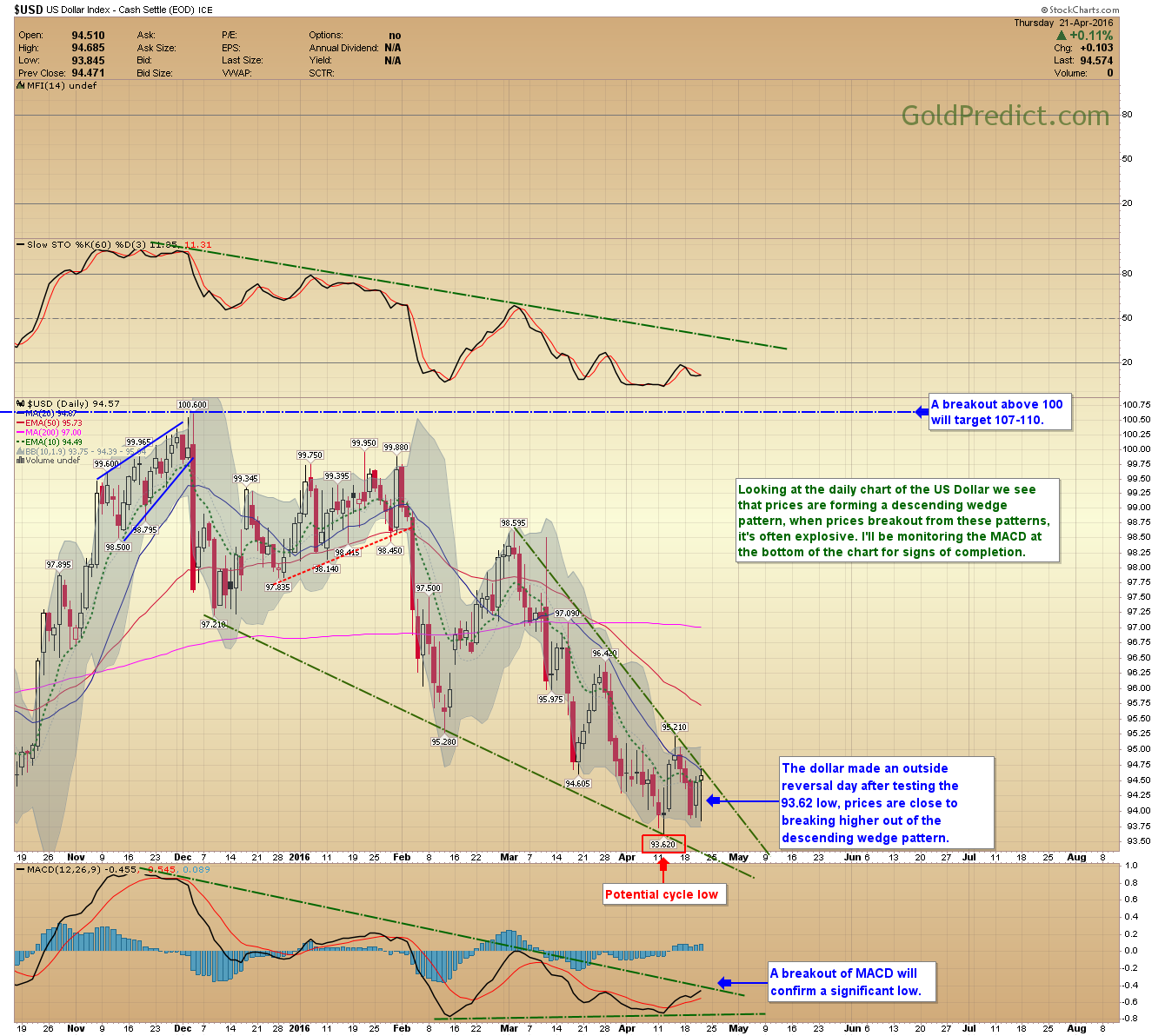 Precious metals and the miners are behaving as the 8-year cycle arrived early. However, it’s too soon to say with confidence. In the event prices did bottom, then that would be ultra-bullish for gold and silver prices going forward as gold held above $1,000 and silver above $13.00. Many of my writings spoke of a final capitulation phase to end this 4-year correction; we didn’t see anything like that. So if prices bottomed, they did so with stealth.

Several charts are converging upon critical levels simultaneously before the next Fed meeting. It’s easy to see how this next announcement will be crucial to the US Dollar. All eyes will be on the meeting scheduled for April 26-27. What they decide then will be instrumental in establishing precious metals for the rest of the year. I will be watching the charts carefully. Near-term we are expecting gold, silver and miners to drop into recognizable intermediate cycle lows. What prices do from that low will be imperative.

For regular updates and access to the Gold Predict Color Code become a member.

This article was published Posted on April 22, 2016 in Categories Free Updates