There is a lot to cover in the Weekend Newsletter, so let’s get started.

Technically speaking precious metals and miners have dropped far enough to form an intermediate cycle low. Several indicators are deeply oversold, and sentiment is turning bearish. These factors suggest a meaningful bottom could form around these levels.

However, the Japanese Yen appears to be 4-weeks away from forming a cyclical low. If the positive correlation between the Yen and gold persists, we can assume gold will be under pressure until the Yen bottoms. Oddly enough, the 4-week time frame happens to line up with the US presidential election on November 8th.

Hence, our primary view is that metals and miners may bounce from around these levels, consolidate a bit, and then drop into one more low around the time of the election.

As the price structure develops we will be sure to release multiple updates keeping you informed.

-US DOLLAR WEEKLY- The dollar moved above the upper trendline during the week but closed the week just below it. A weekly close above it will confirm an upward breakout. 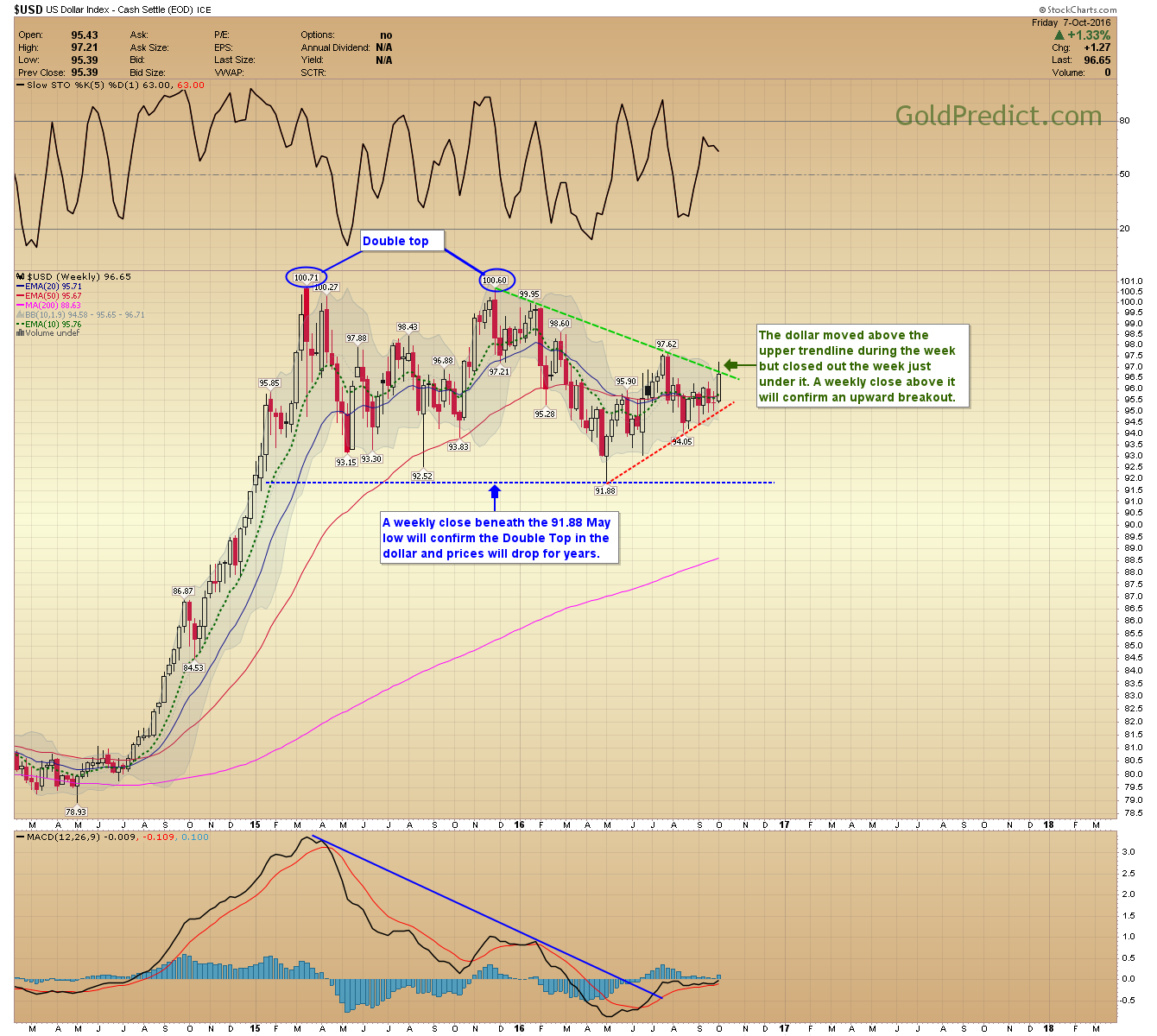 -US DOLLAR DAILY- The daily chart of the dollar shows prices testing the upper trendline. We may see a pullback to the top of the red triangle before the next move higher. 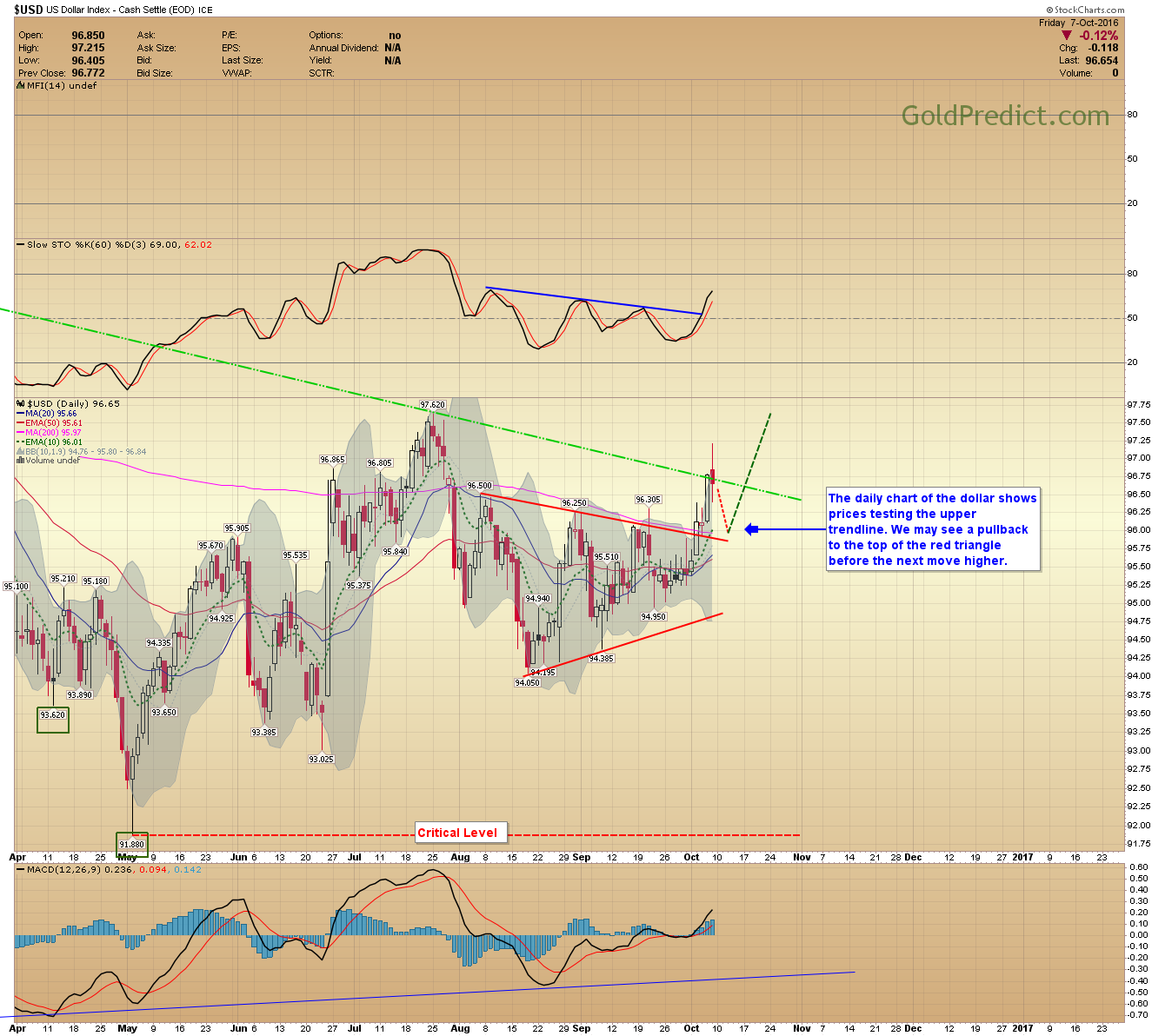 -YEN WEEKLY- The Yen is 46-weeks into an average 50-week cycle. Prices should drop for a few more weeks and bottom just under the 50-week EMA. Suggesting gold is yet to reach its bottom. 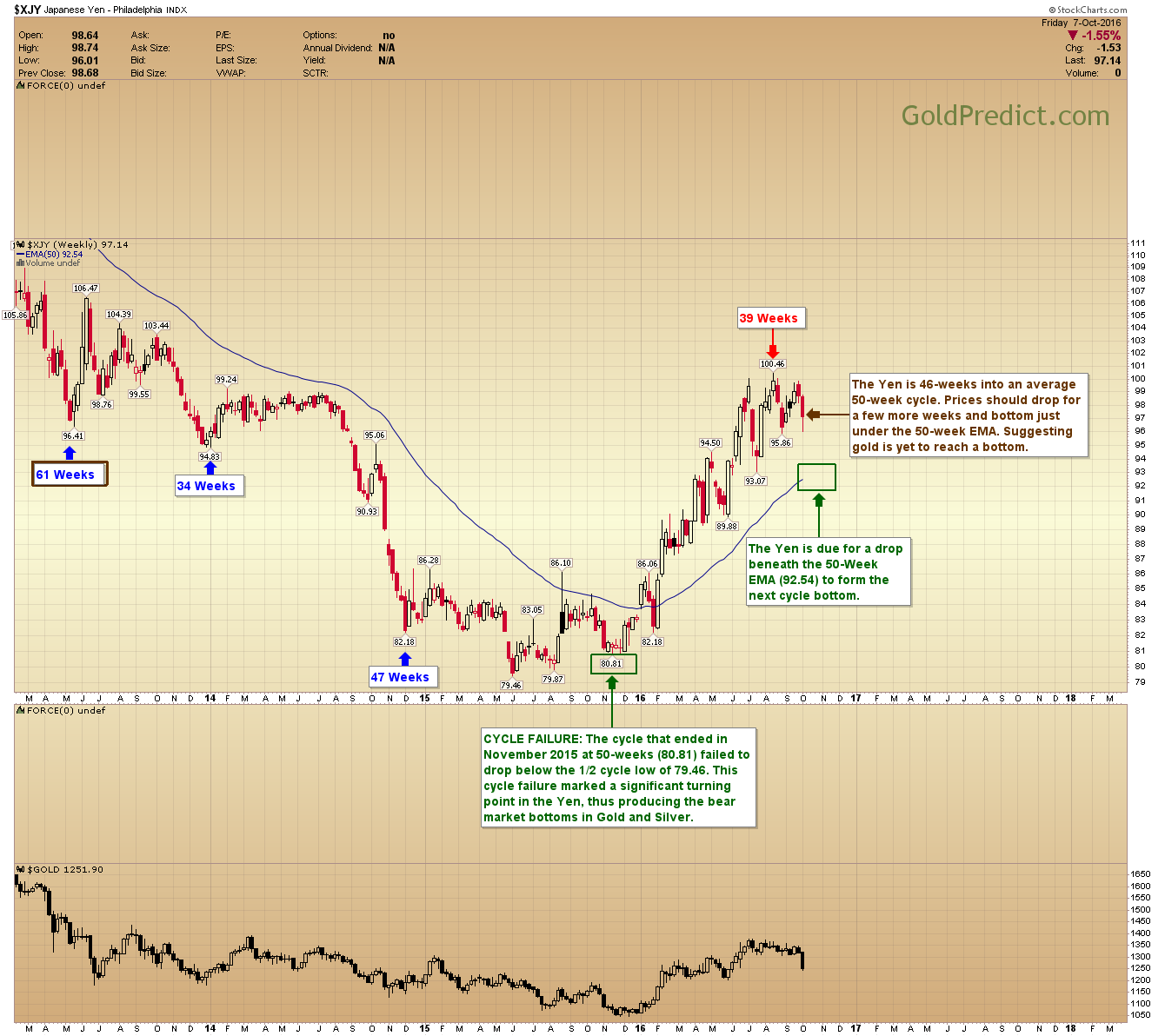 -YEN DAILY- The Yen appears to be bouncing after the sharp decline from 99.82. Prices could test the 10-day EMA or the underside of the trendline before resuming the move lower. 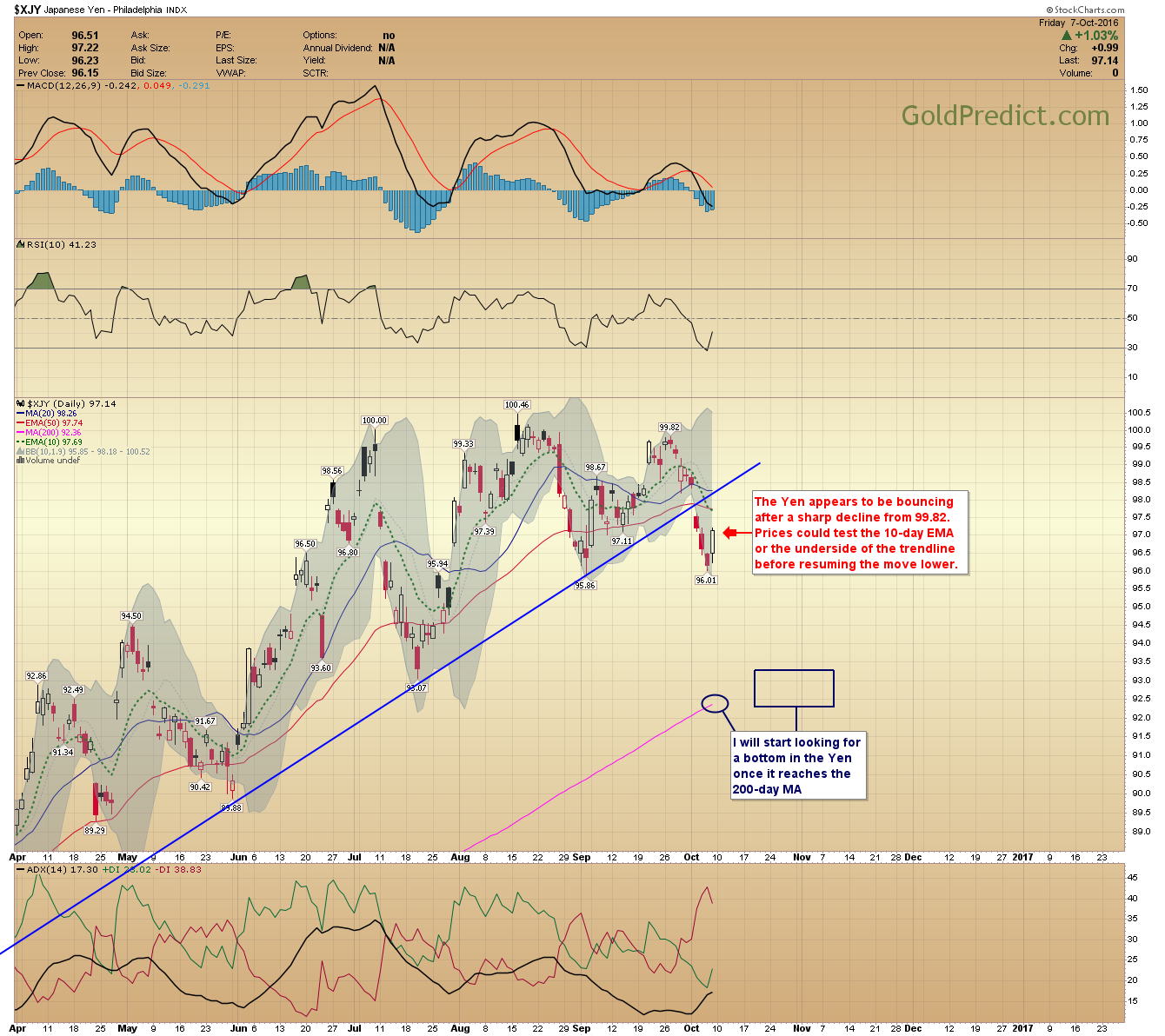 -GOLD WEEKLY- Weekly Gold prices closed below the 200-week MA and reached the 38.2% Fibonacci retracement. I think prices will bottom at or above the 50% retracement. However, the final line in the sand is the 61.8% retracement coming in at $1,172. 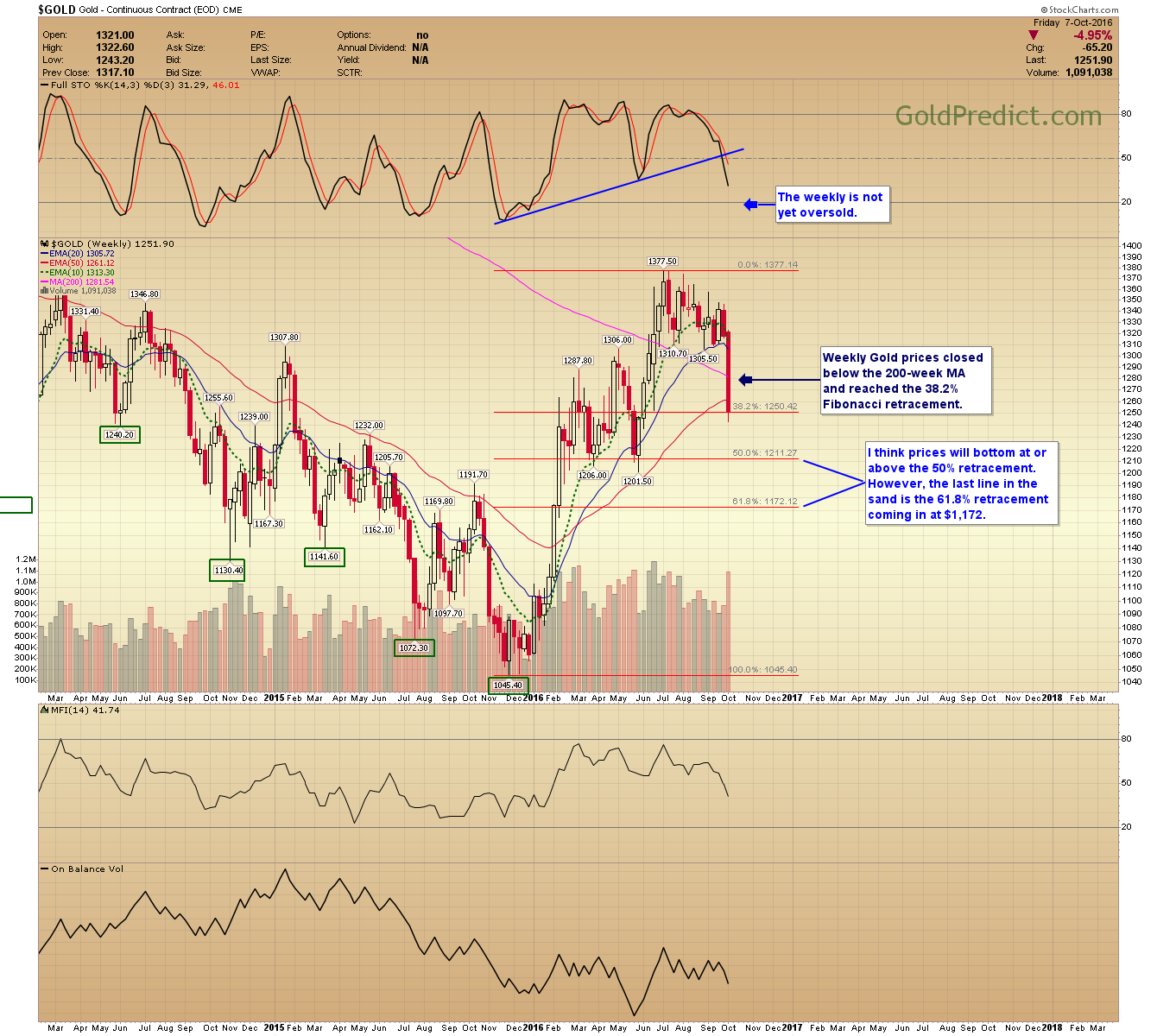 -GOLD DAILY- Prices hit the descending triangle target, and we may be forming the 4th common cycle low. It stands to reason that if the Yen has 4-weeks before a potential bottom, gold may bounce, consolidate a bit, and then drop to the final low around the time of the US election on November 8th. 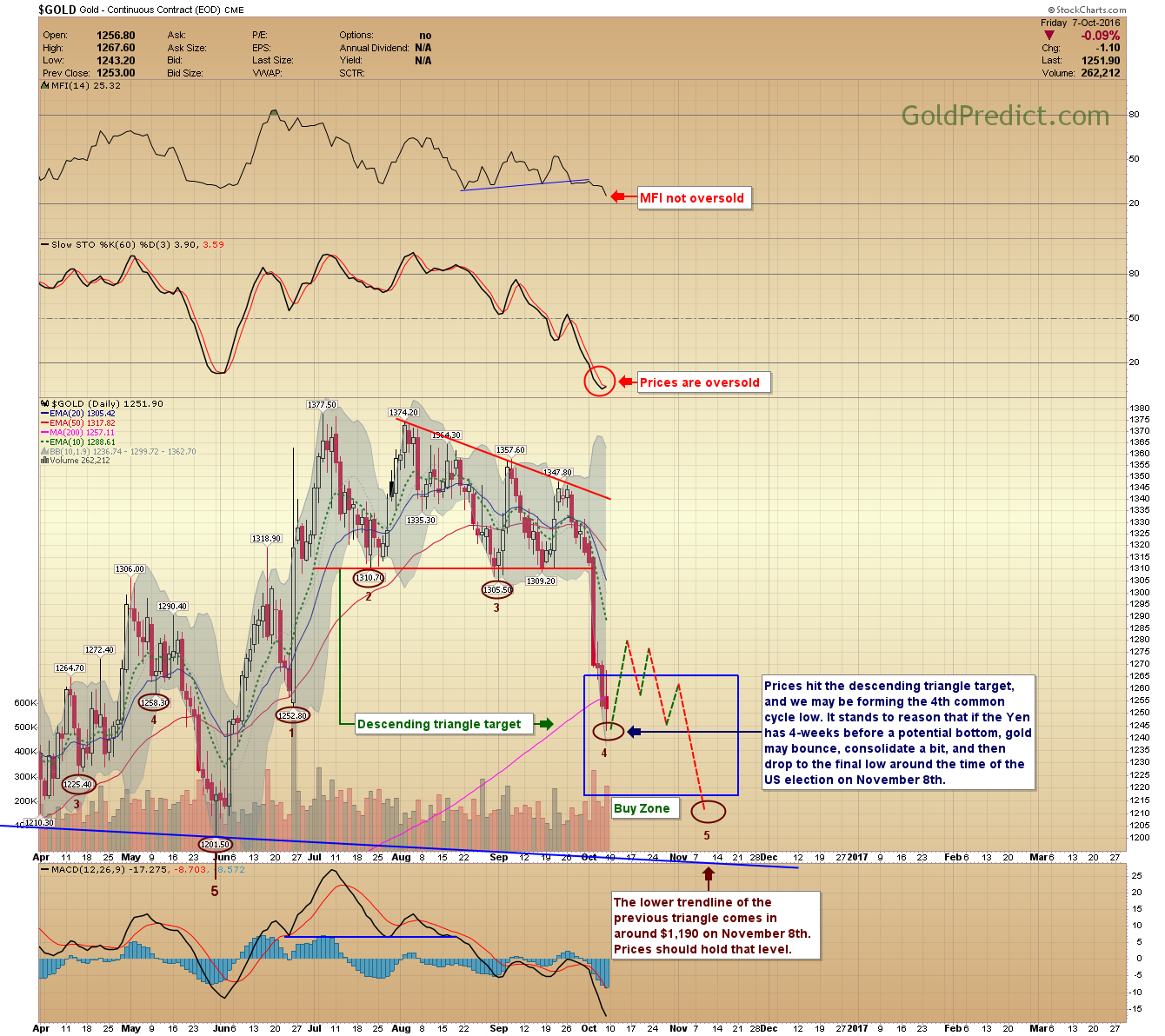 Note: Chart analysis is similar to being a detective. We rule out certain suspects and focus on the primary probabilities. As additional evidence comes available, we narrow down the potential outcomes until one stands out. Right now there are several possibilities, as the picture clears we will update.

-SILVER DAILY- Silver may bounce off the 200-day MA before falling further into the Buy Zone. Note: The MFI is not oversold. 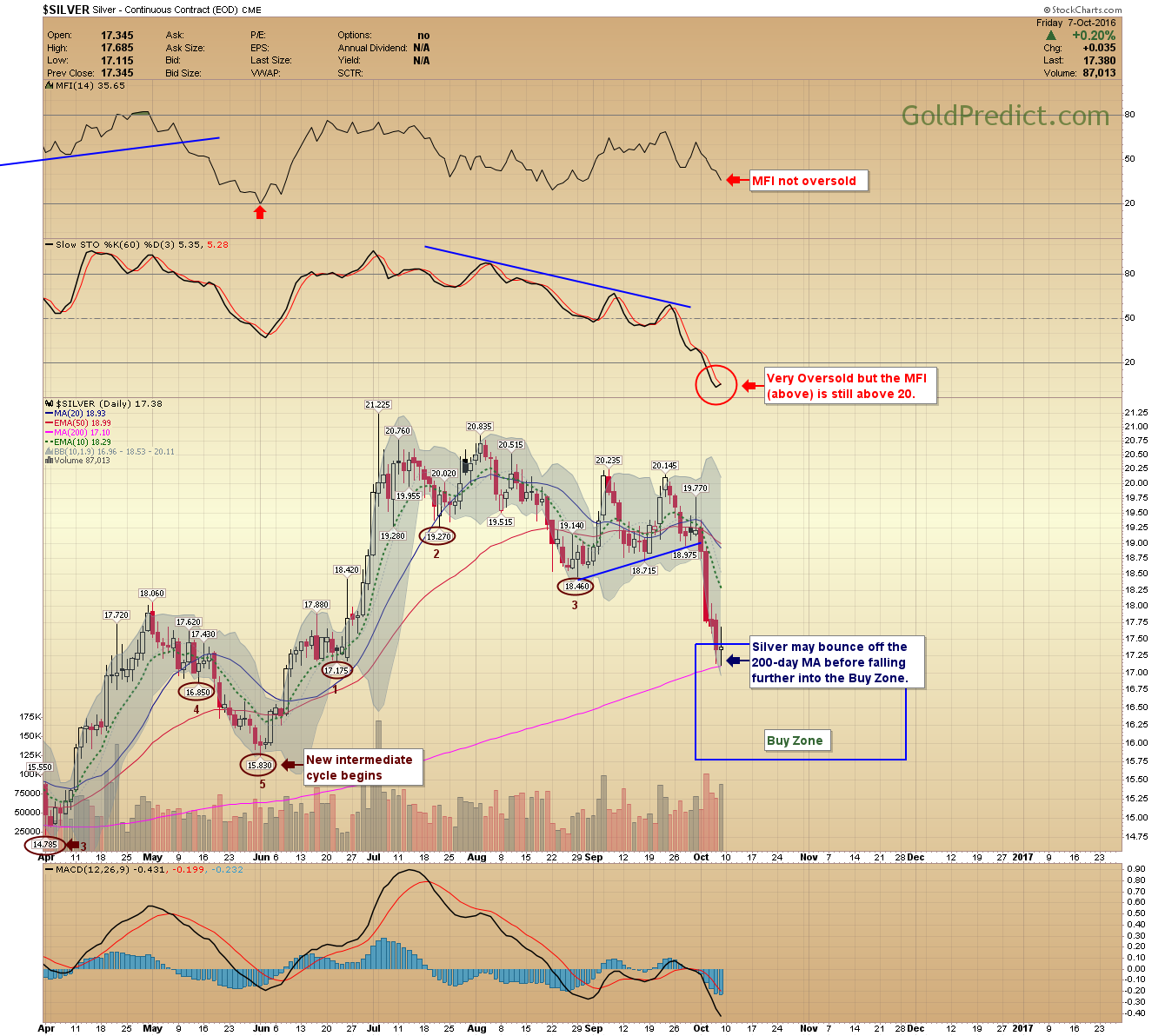 -HUI WEEKLY- The HUI nearly touched the 50% retracement. The next level of support comes in at 170.

-HUI DAILY- Adding the move lower from the 286 high to the bottom of the consolidation zone gives a potential target of 173, if prices persist lower. 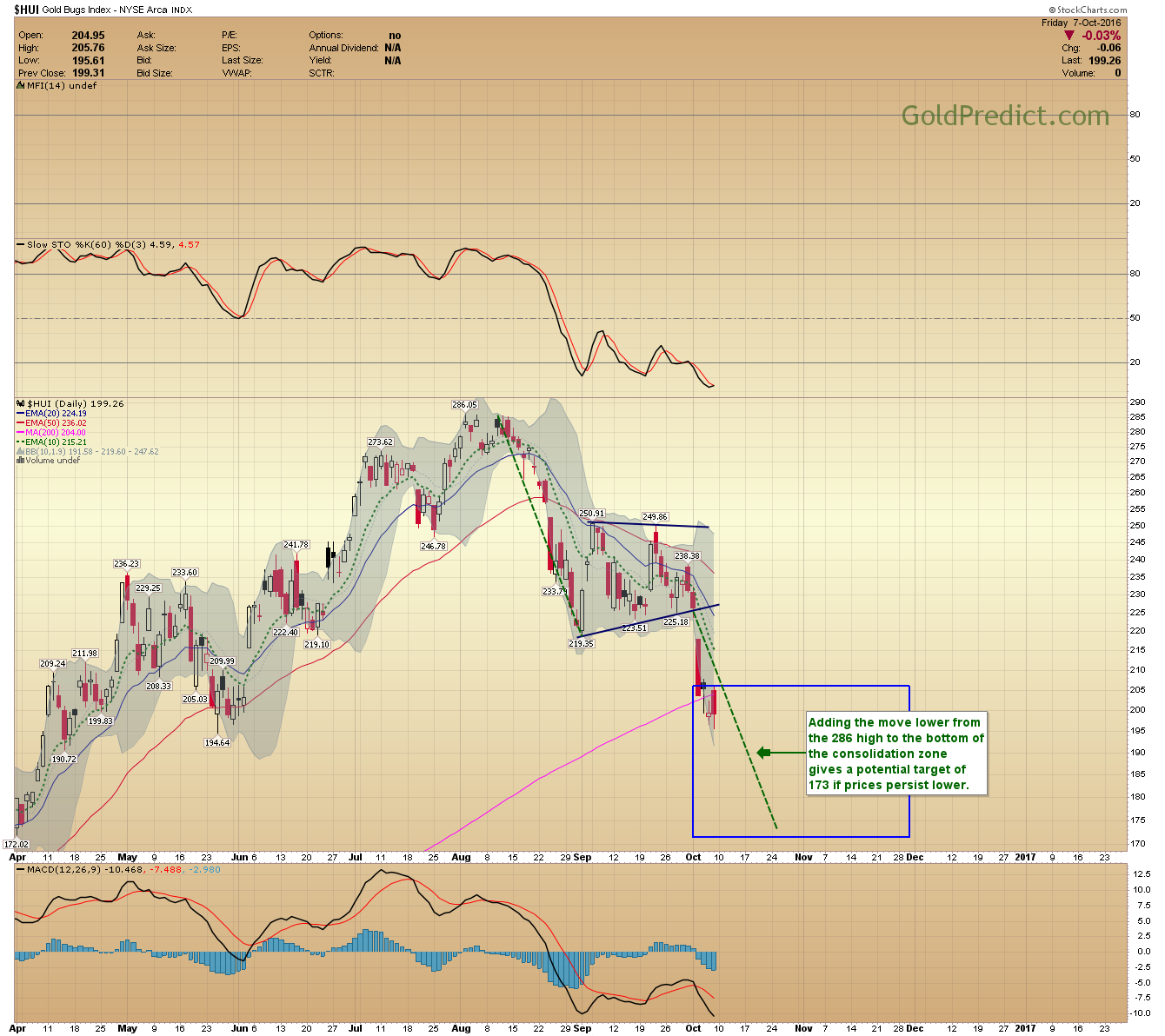 -GDX- A similarly measured target in GDX provides $20.50 as a potential target. 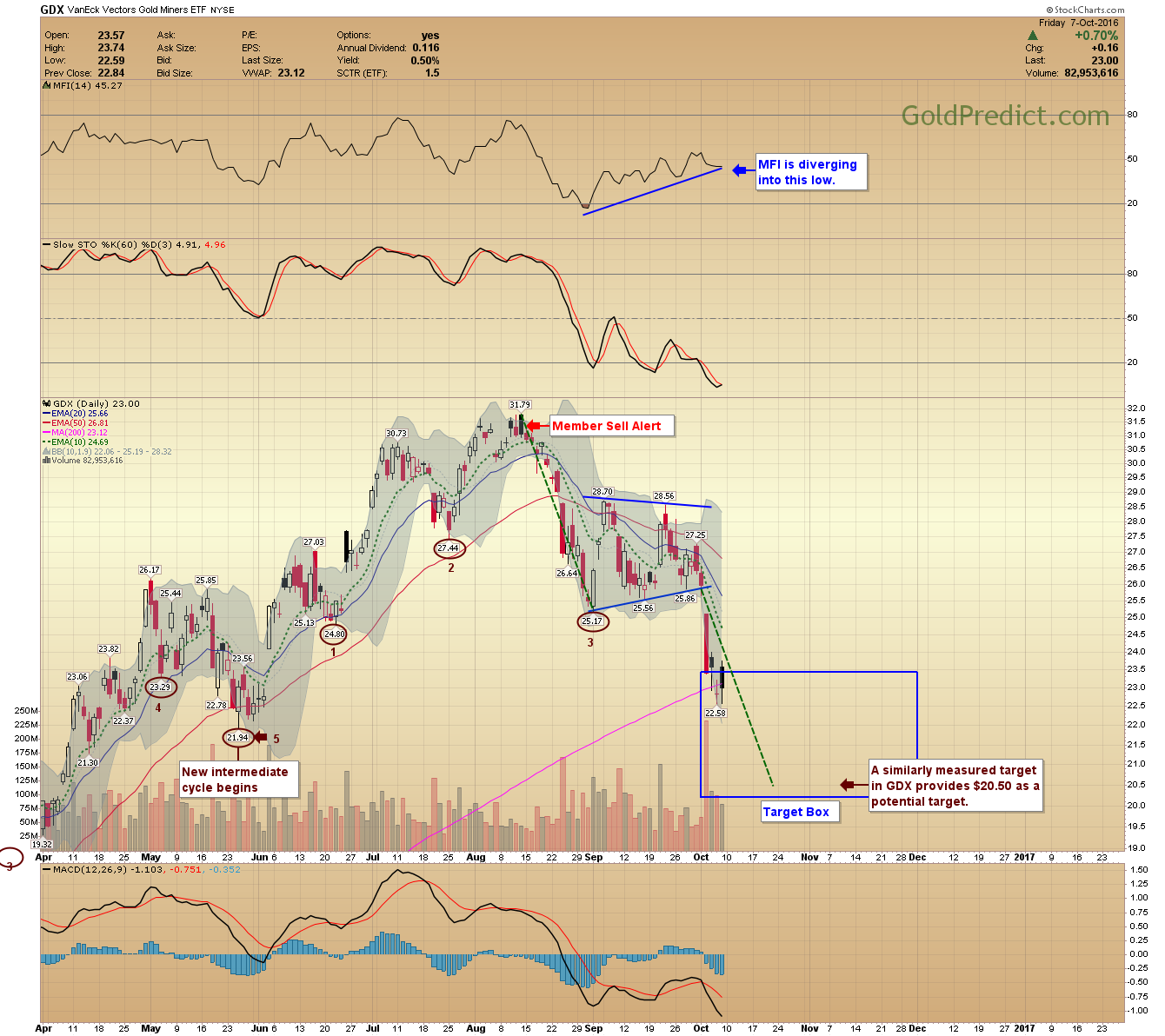 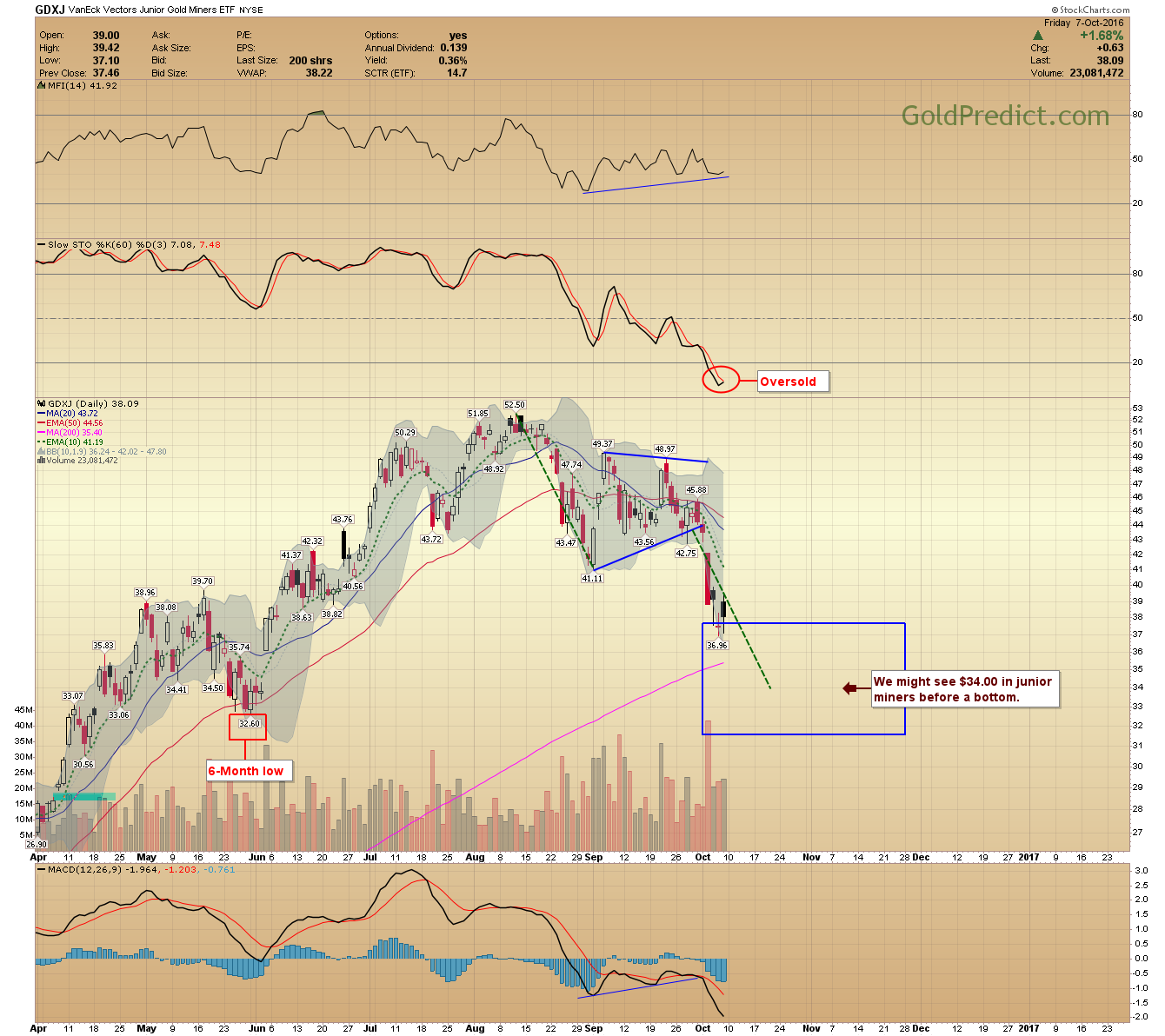 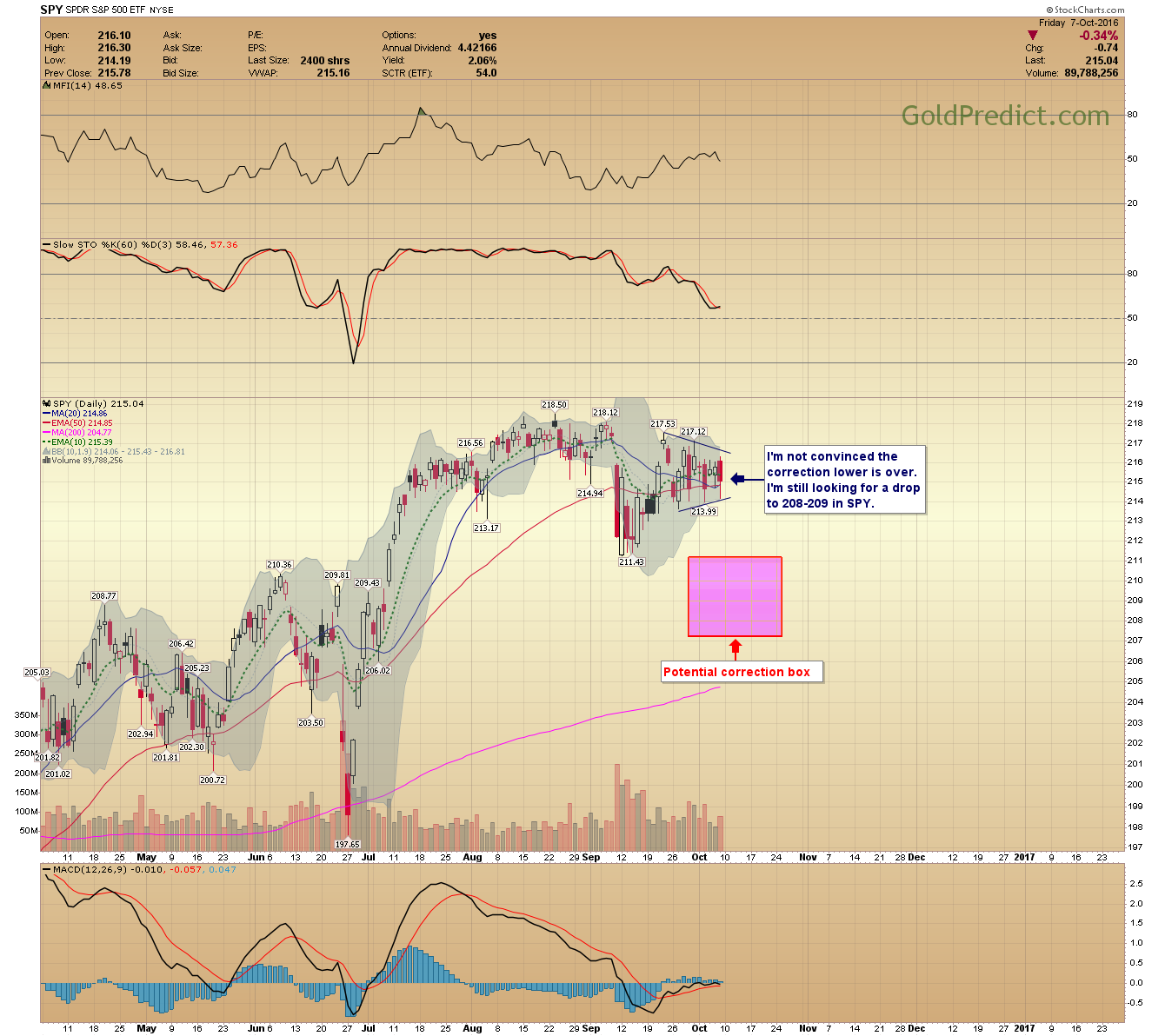 -WTIC WEEKLY- The fundamentals for oil are still negative, in our opinion. Prices are running into resistance between $50.00-$52.00. A weekly close above $52.00 would cause me to reconsider our bearish attitude. 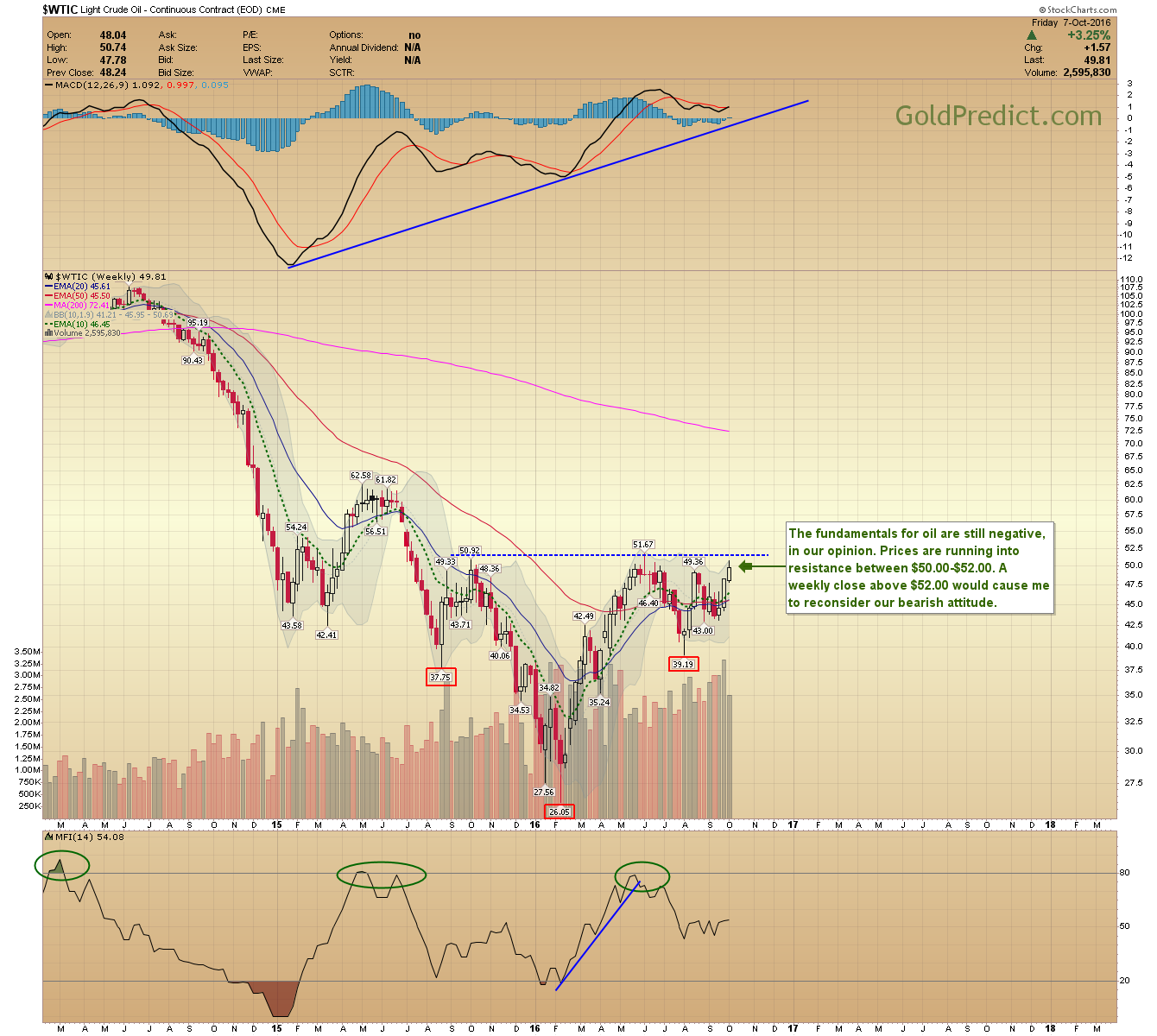 -WTIC DAILY- Oil prices are entering the strong resistance box. I’m watching for signs of topping in this area. 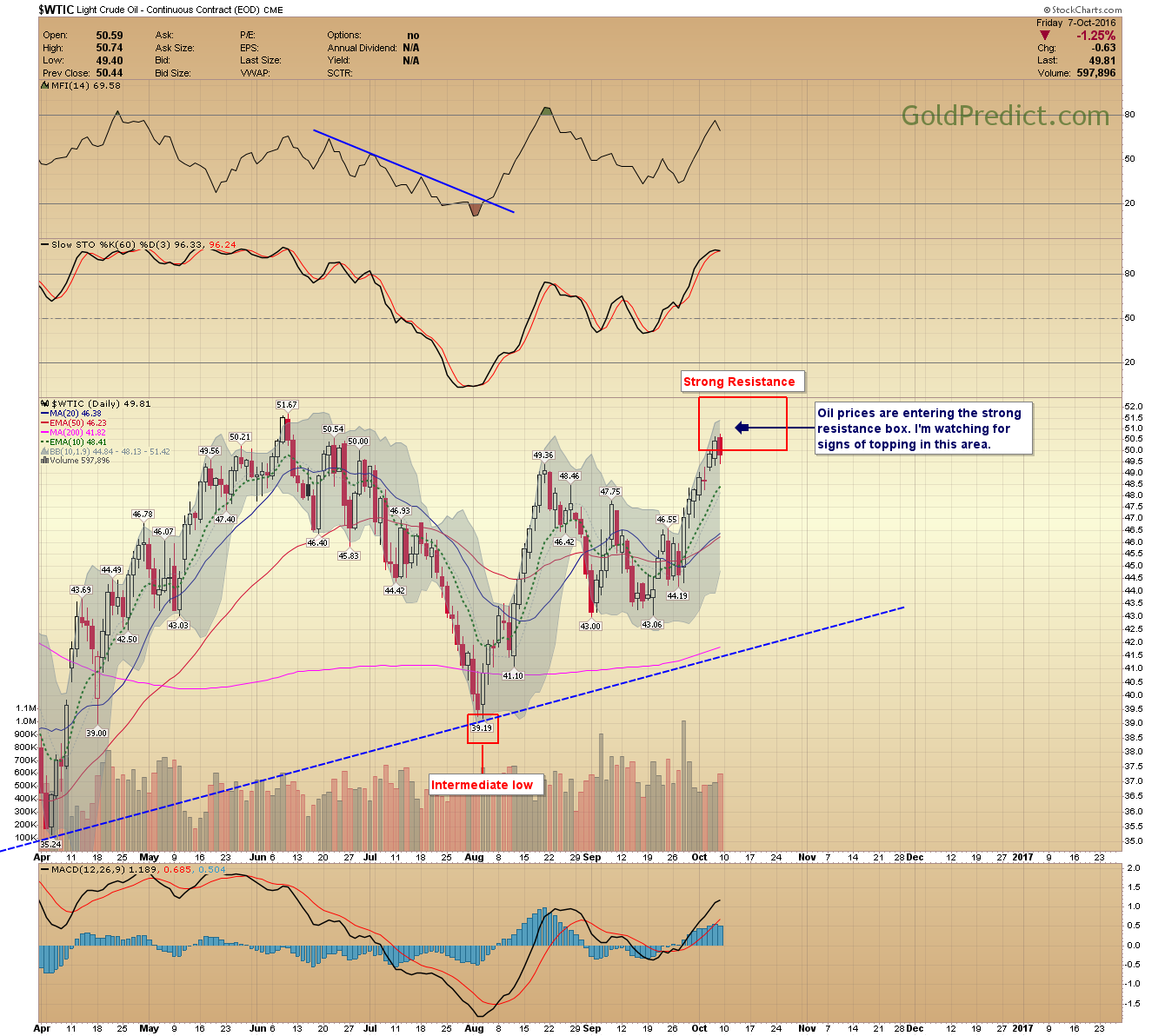 Have a lovely weekend.

This article was published Posted on October 14, 2016 in Categories Weekend Newsletters