THE TALE OF TWO CYCLES

We currently sit in a precarious position regarding the cycles I follow. The intermediate (6-month) gold cycle is the primary mechanism behind roughly 70% of our timing decisions and therefore a vital component of our system. Our medium-term outlook has fluctuated between bullish and bearish the last few weeks and I’d like to spend the Weekend Newsletter explaining why.

Each scenario has profound investing implications, and we don’t want to get it wrong. The first implies that the 8-year cycle bottomed December 3rd, 2015 at $1,045.40 and that prices are conceivably dropping into the last great buying opportunity before heading much higher. The latter proposes that the move to $1,377.50 was merely a bear market rally and that prices will drop swiftly from here into the real 8-year cycle low.

After combing through the data, there is the evidence supporting both views.

Supporting an 8-year cycle bottom in December of 2015:

Views opposing an 8-year cycle bottom in December of 2015: 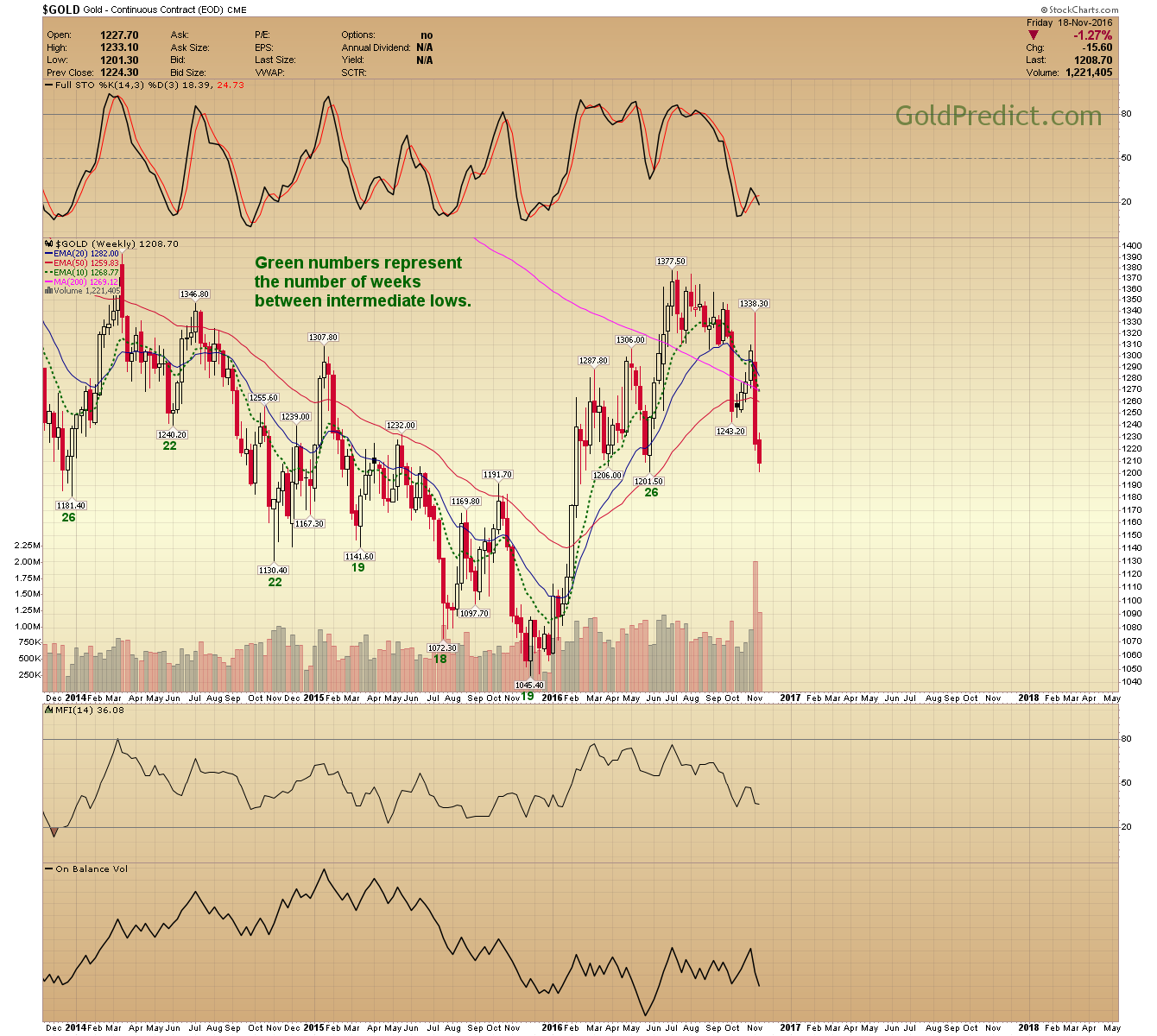 Did the October 7th $1,243.20 low mark an intermediate cycle bottom at 18-weeks? Technically speaking, prices fulfilled the minimum requirements needed to consider this a low, but barely. Prices bottomed at 18-weeks, rallied for 5-weeks, and there was at least one close above the 10-week EMA. 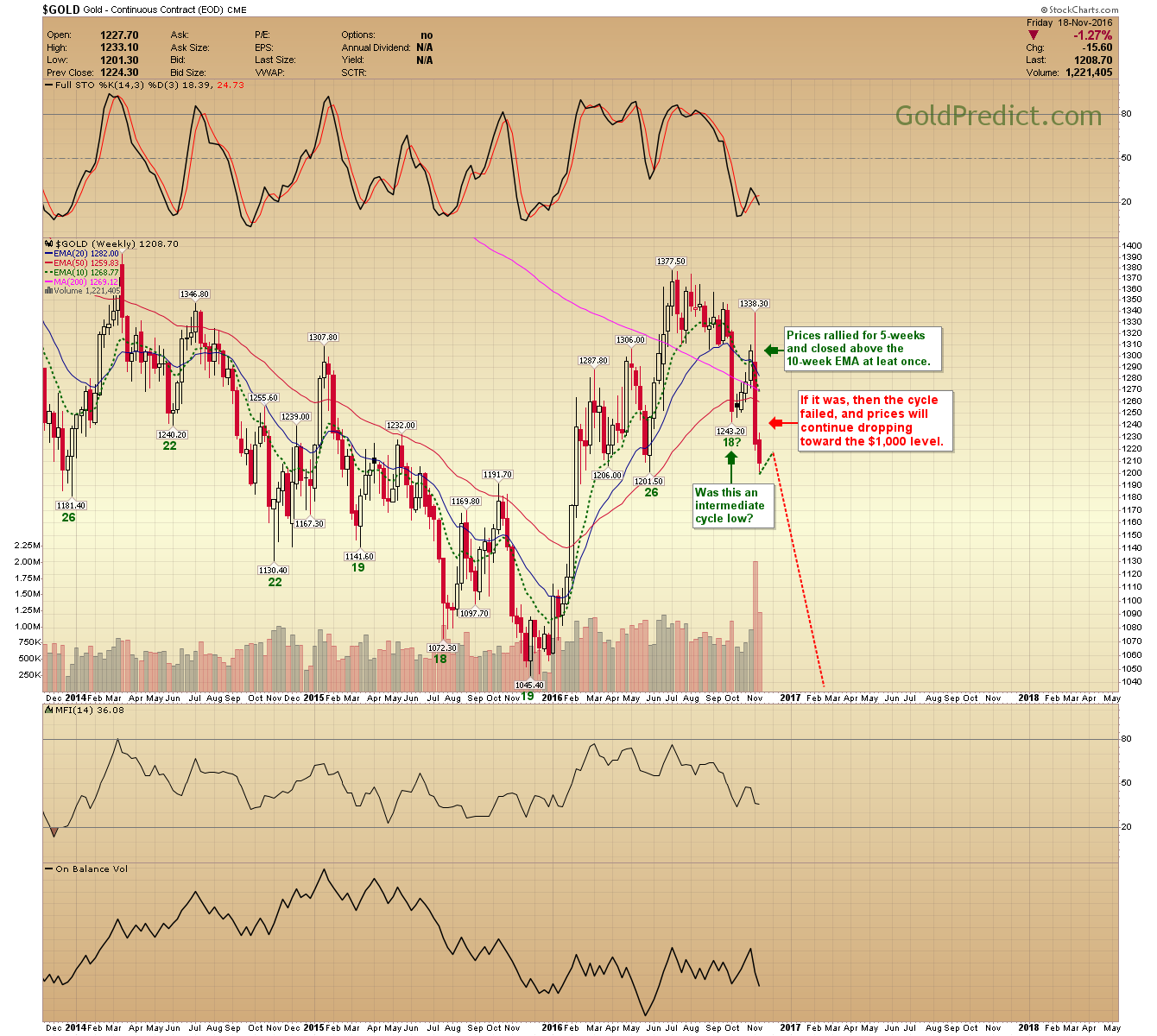 On the other hand, it’s possible the October rally was simply pre-election jitters that simulated an intermediate-term rally. If this is the case, then prices are still dropping into an intermediate cycle low, and at 25-weeks we should see a bottom quickly. 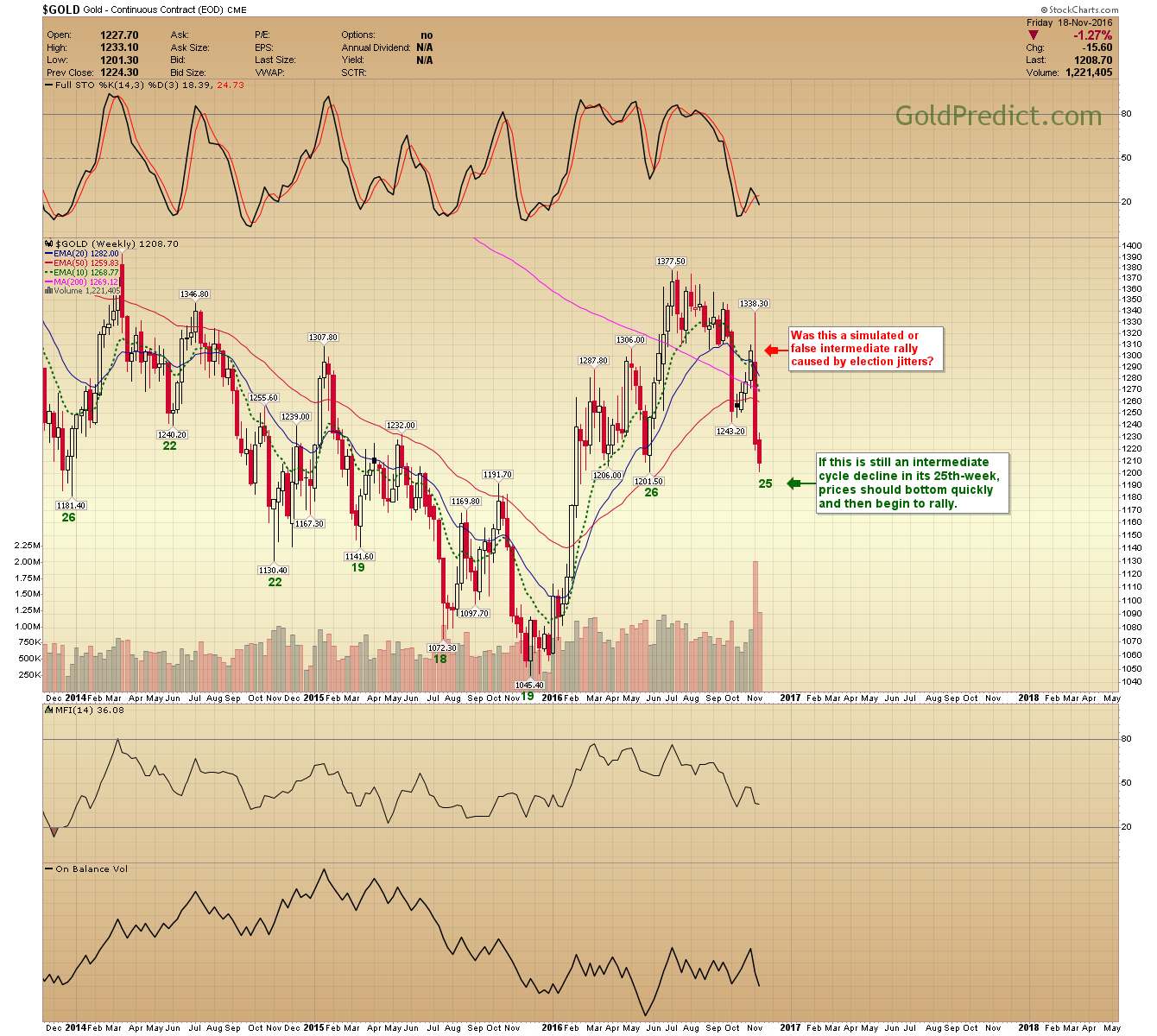 What should we do? Keep trading positions small and or wait until we know which is the correct cycle interpretation.

If we are still stuck an intermediate cycle decline, at 25-weeks. Then gold prices either bottomed last week or they soon will. It’s possible the big banks will try and run the stops below $1,200 to create a liquidity flush allowing them to enter large positions. In this event, I would expect to see a sharp decline followed by a rally back to the $1,200 level. Conversely, if prices don’t recover quickly from a sharp decline below $1,200, then the odds will increase that we are headed into the actual 8-year cycle low.

Nevertheless, prices will be higher 18-months from now and much-much higher 4-years from now. Prices falling further from here should be viewed as a gift.

Yes, our buy gauges are pegged in the excellent buy zones, but we need to proceed cautiously until we know which cycle is playing out.

This article was published Posted on November 20, 2016 in Categories Free Updates, Weekend Newsletters