Silver made a new high on Friday, but gold is yet to confirm that move. Gold and Miners need to exceed Wednesday’s highs to continue this rally. If prices fail to print fresh highs next week, they risk rolling over into a broader correction. I’d use Friday’s lows or your breakeven point (if you entered Friday morning) as a tight stop.

Several factors supported the possibility for a top last week. Therefore, follow through to new highs is imperative. If prices neglect to reach new highs, we could see a price correction into March. The next cycle inflection point recommends March 1st or 2nd for a possible low. More on that next week if gold and miners reject new highs.

The price action early next week should be telling. Expect multiple updates as the short-term trend emerges.

-US DOLLAR WEEKLY- Weekly dollar prices formed a bullish engulfing pattern and closed at the 10-week EMA. The stochastics is oversold, and prices have an opportunity to rally. 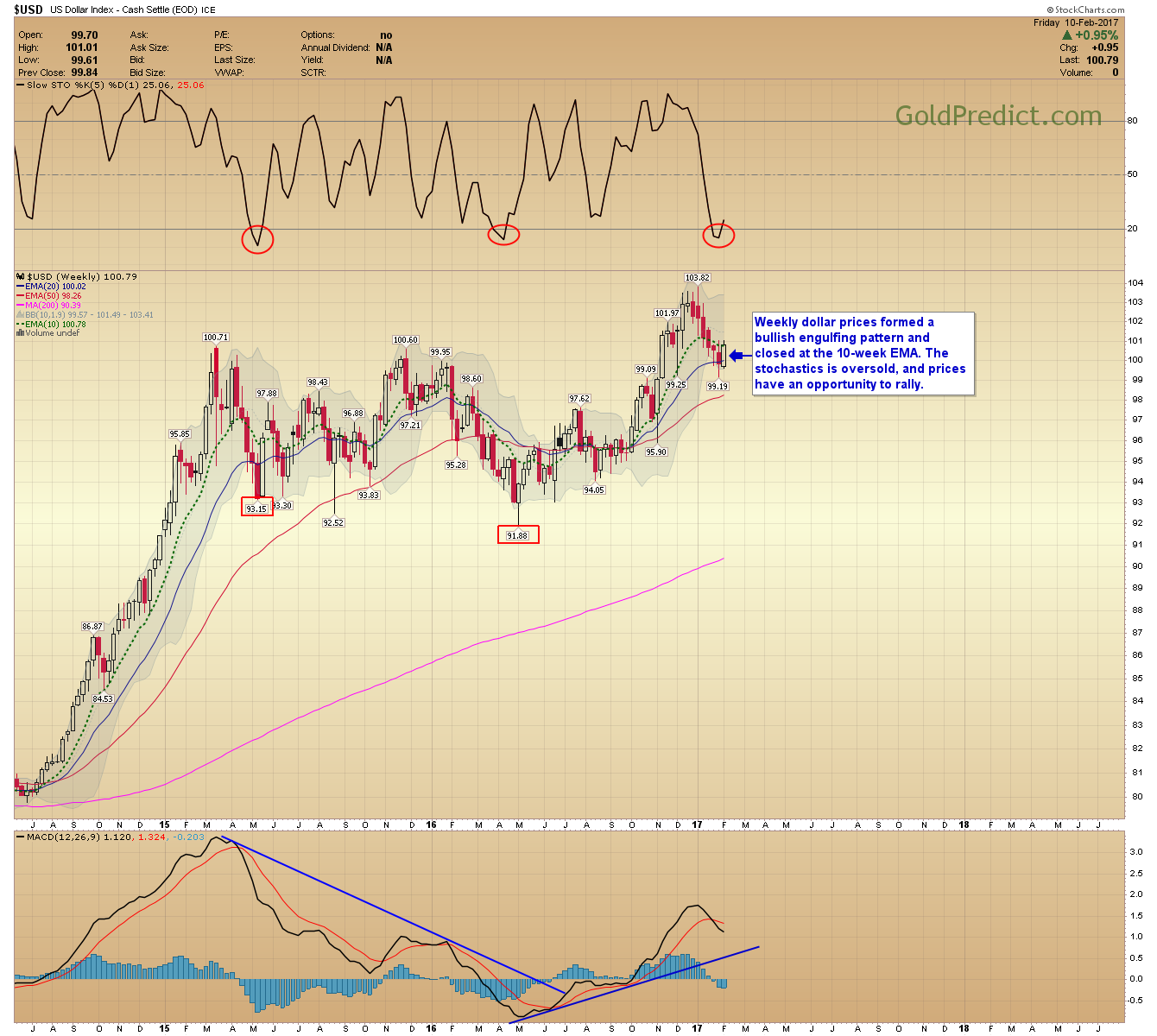 -US DOLLAR DAILY- Prices closed back above the 50-day EMA, but it is unclear how long this rally will last. Gold and Silver haven’t responded to the strength of the dollar. The inverse correlation should return with either metals or the dollar rolling over sometime next week. 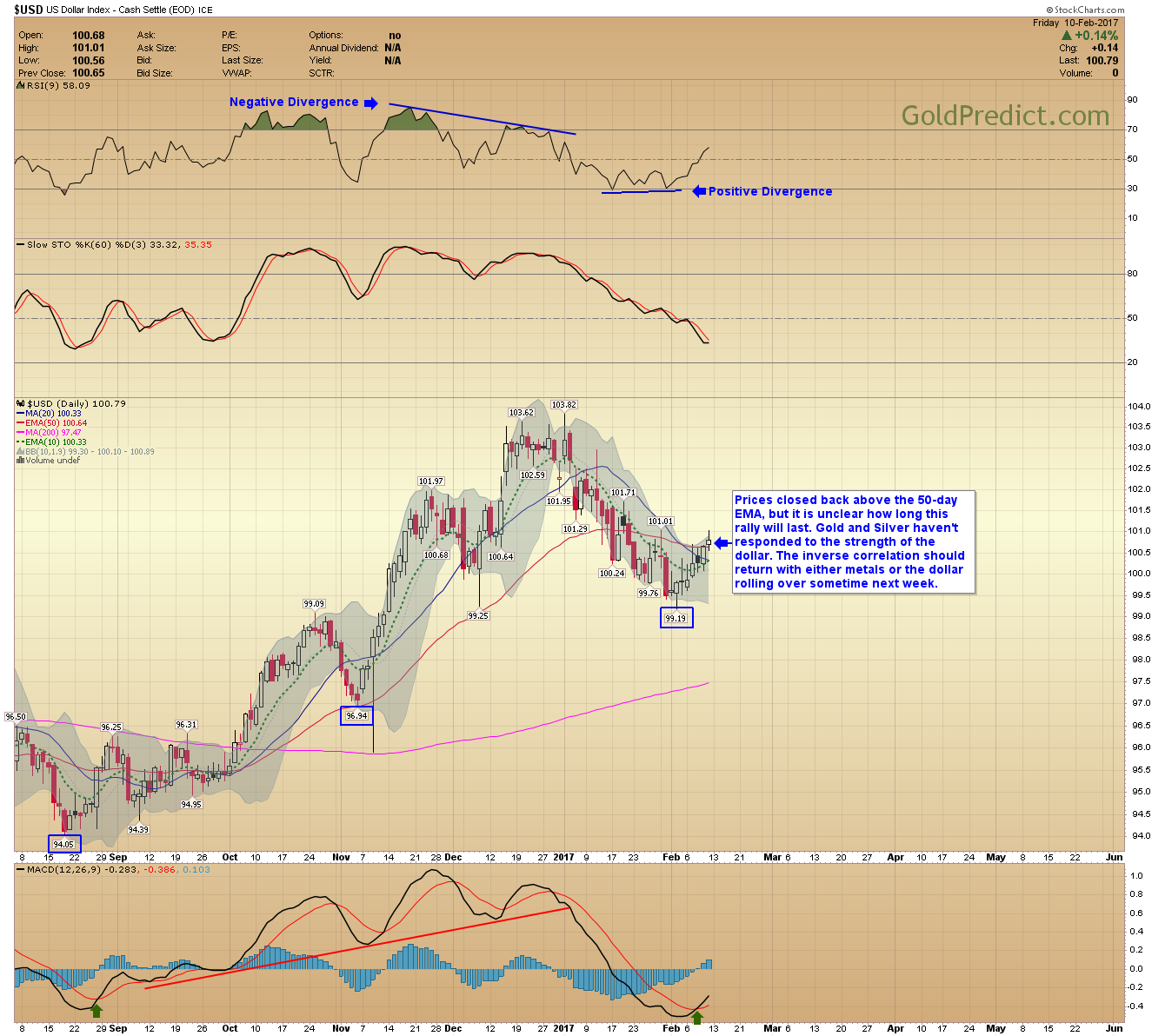 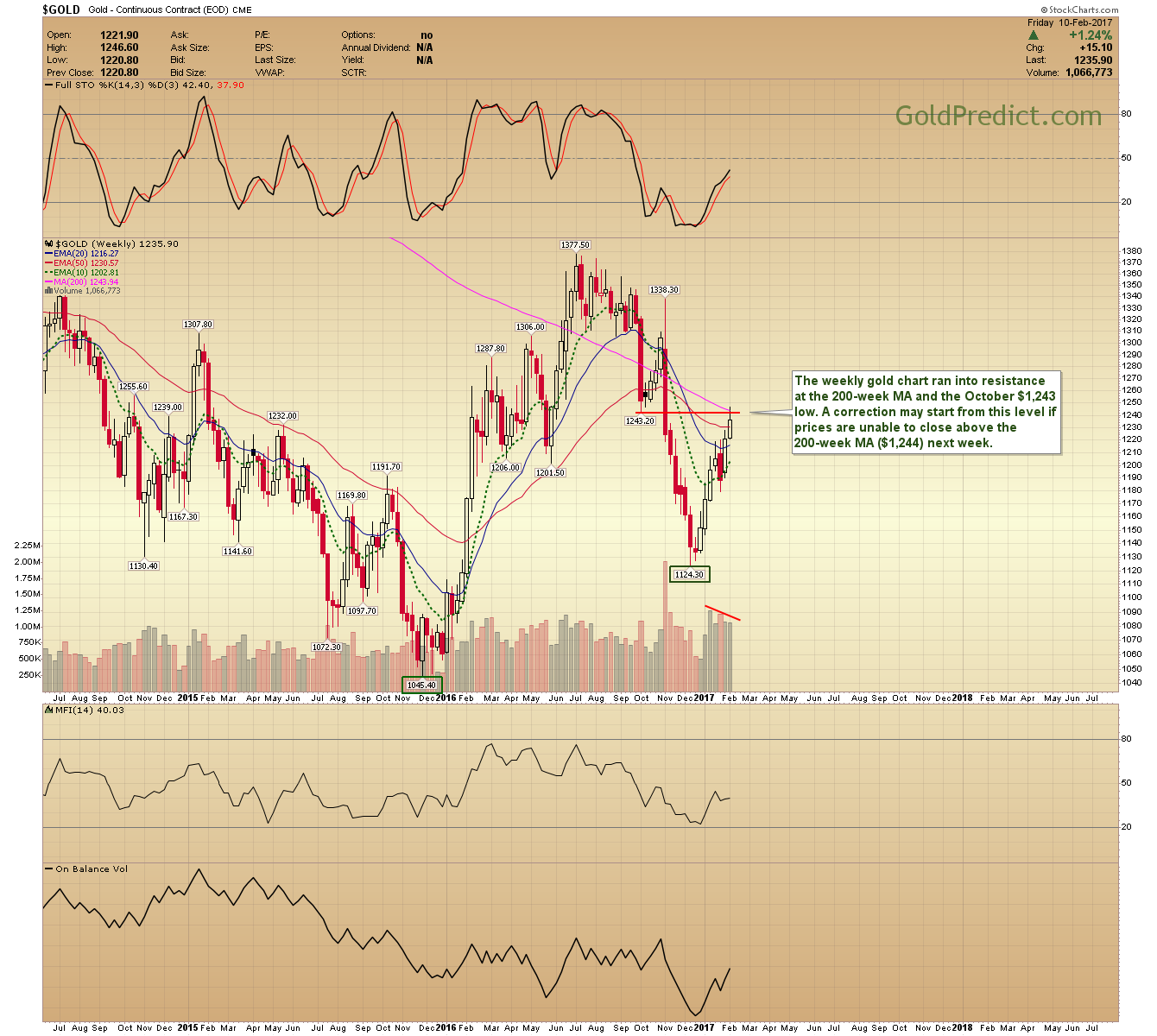 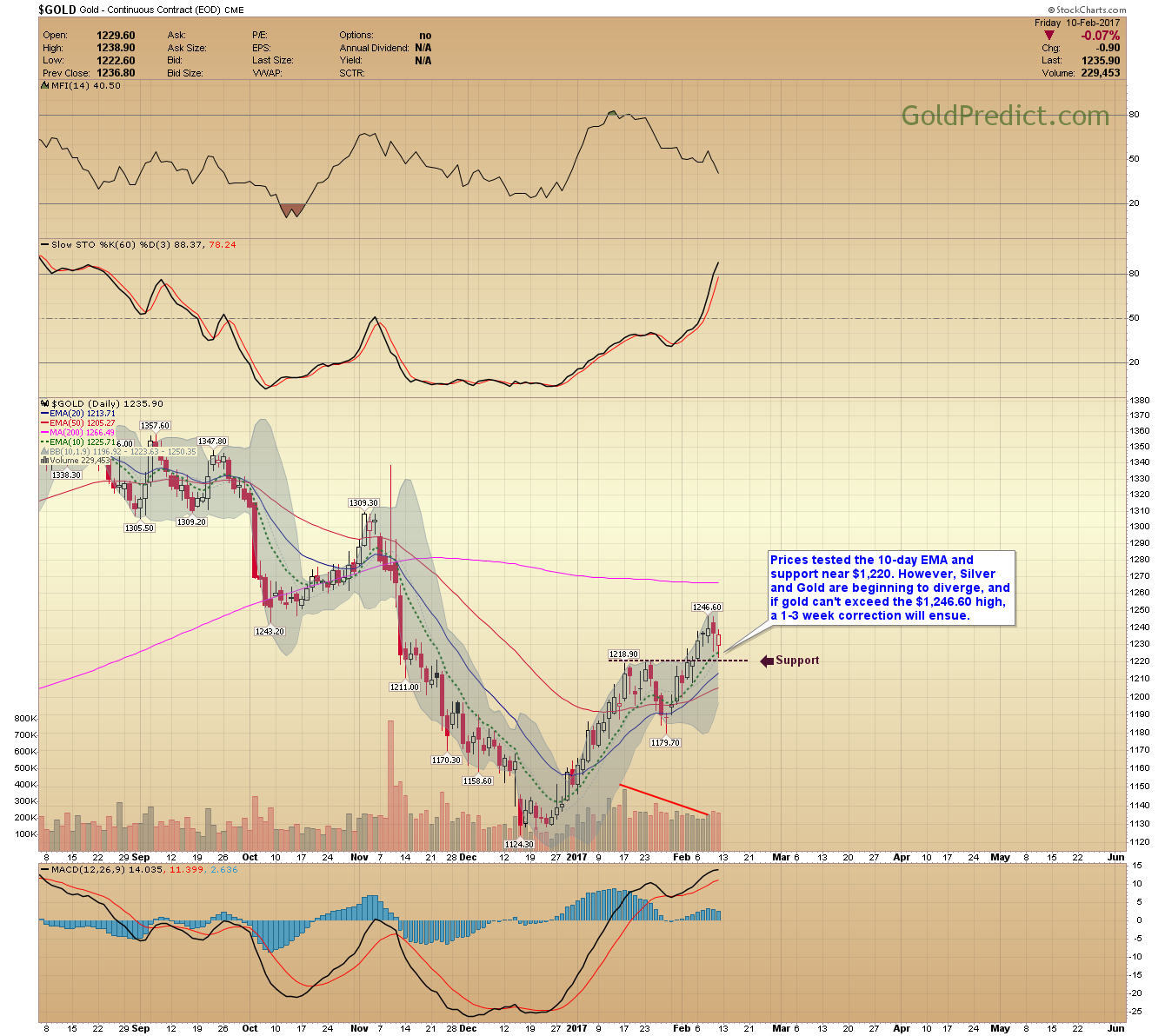 -SILVER WEEKLY- Prices advanced for the 7th straight week stopping at the 200-week MA. The Stochastics (top) is at a level that often leads to a correction. 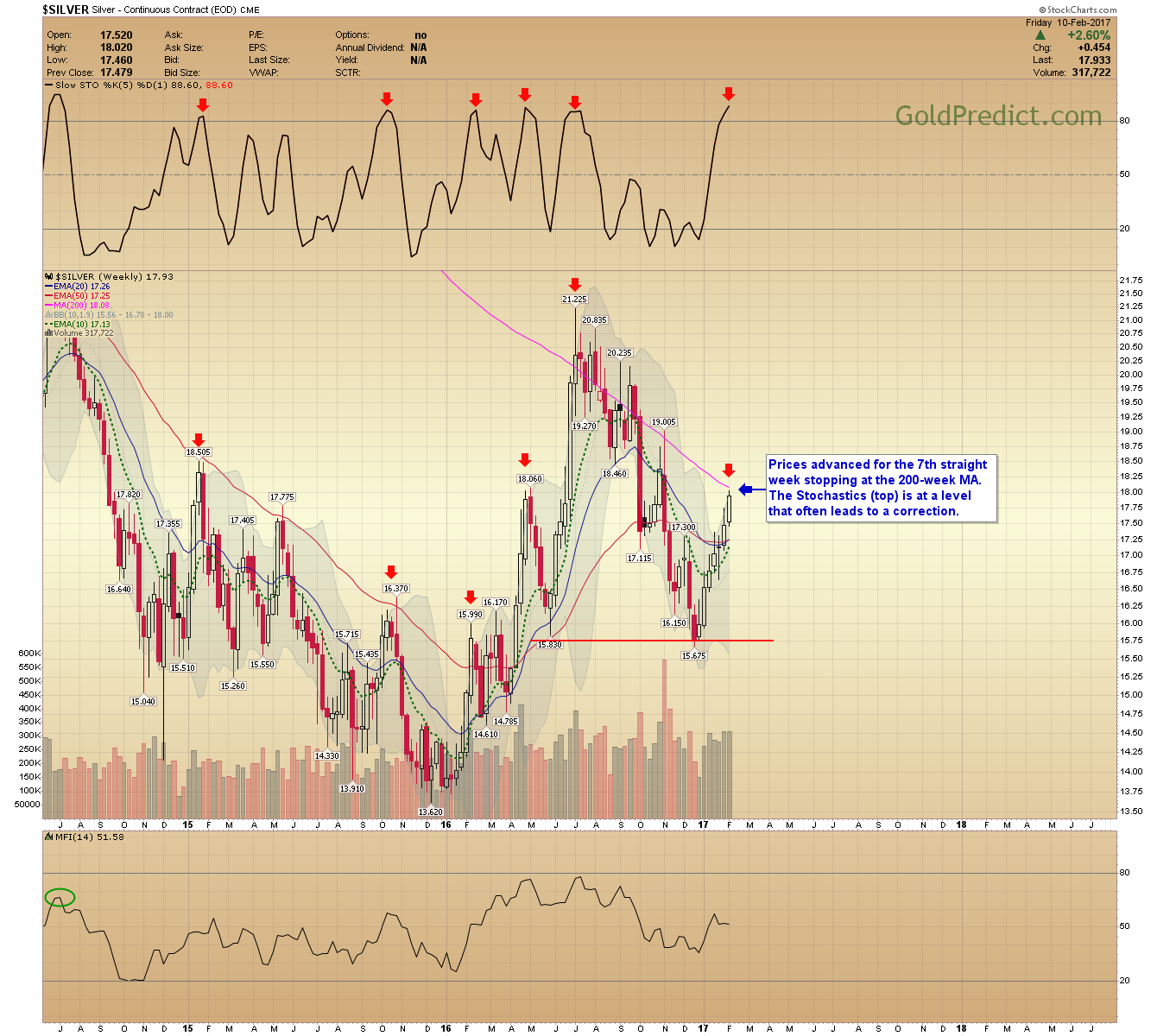 -SILVER DAILY- Prices reached the 200-day MA on the daily chart, but there are still no signs of topping. 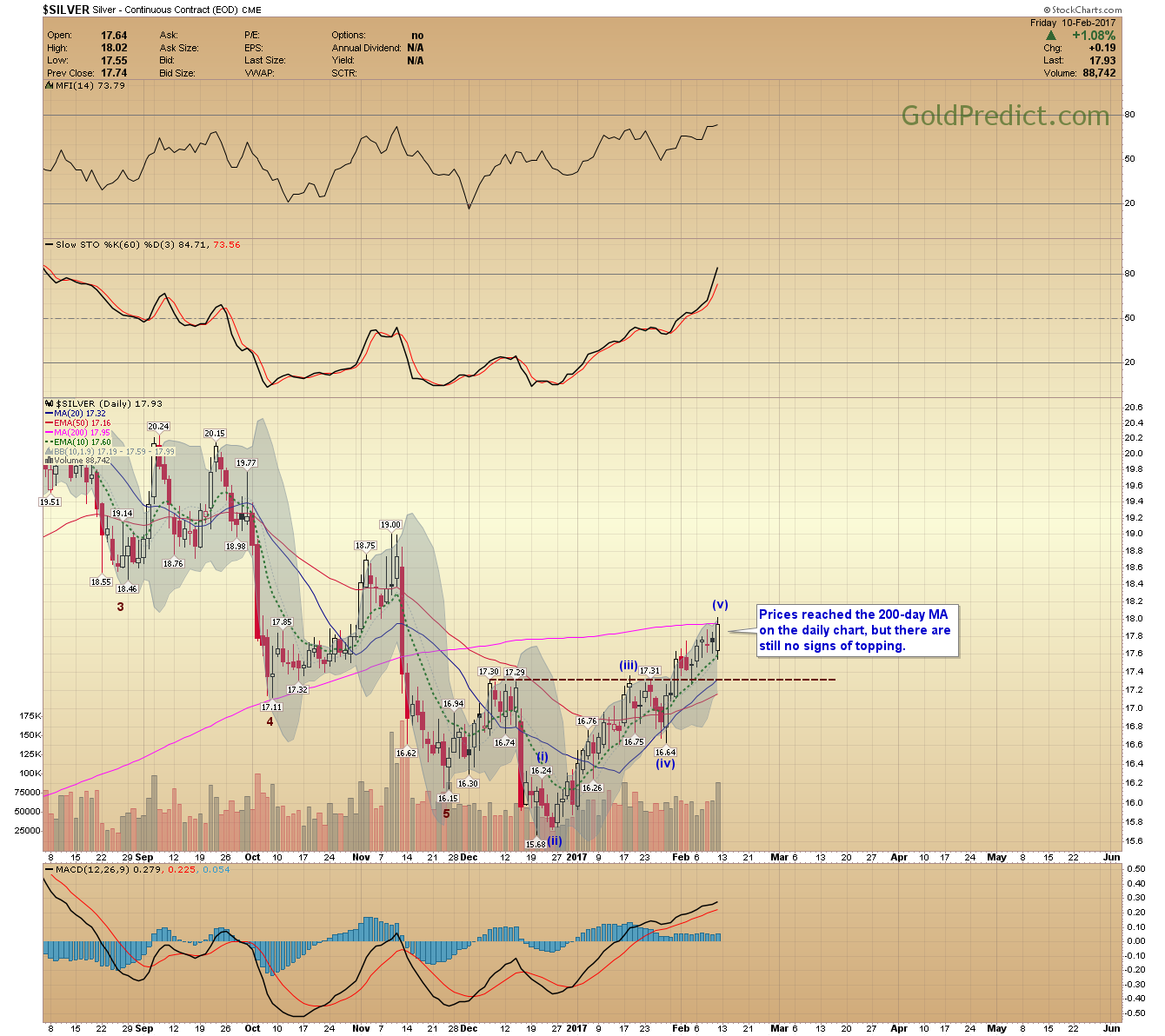 -GDX- Prices found support at the 10-day EMA and rallied the rest of the day. They now need to exceed the $25.71 high to confirm that this was just a pullback. Dropping below Friday’s low would be negative, likely leading to a more significant correction. 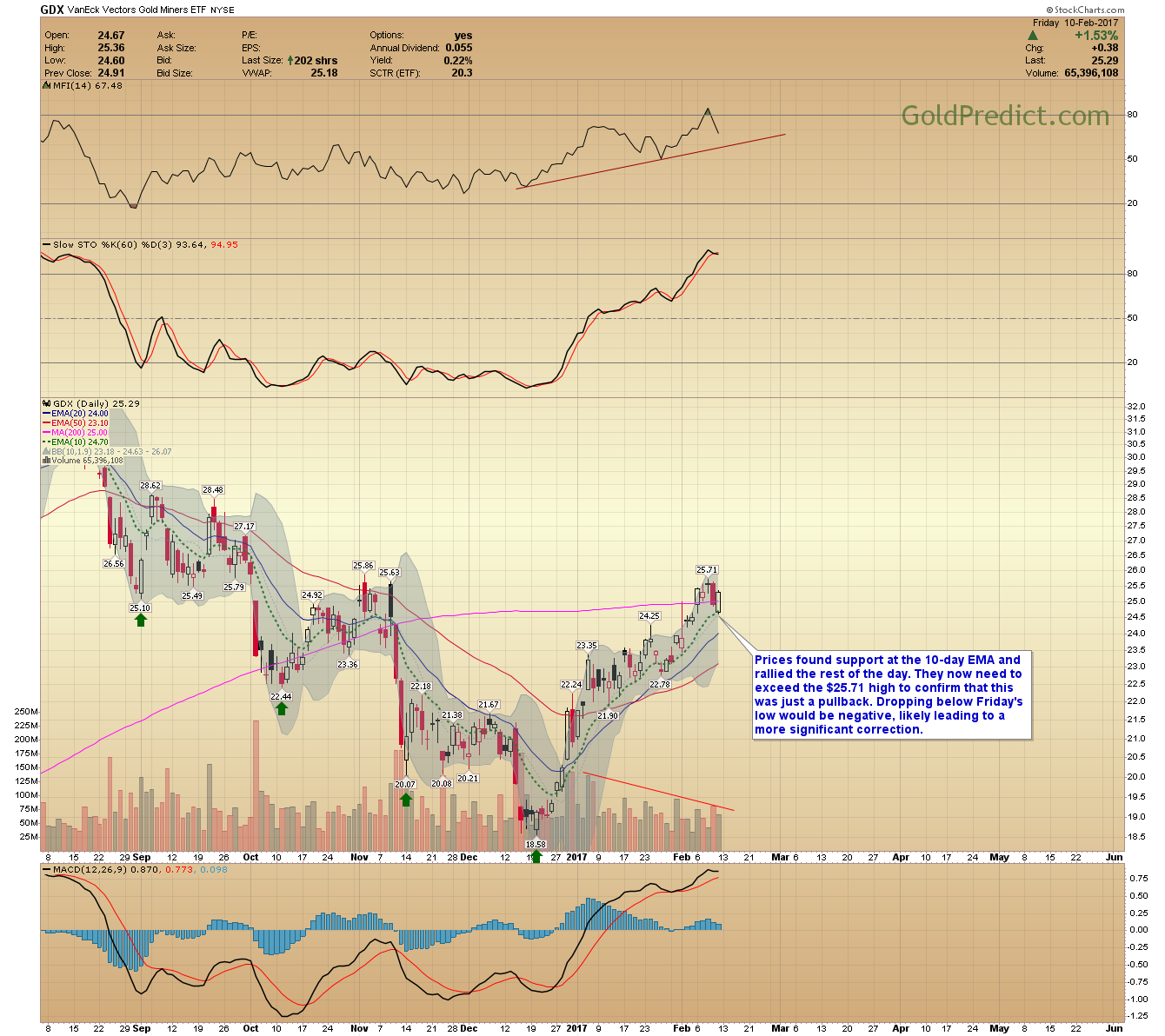 -GDXJ- Juniors also bounced off the 10-day EMA, and they need to exceed the $43.01 high to extend the rally. Dropping back below the 10-day EMA would point to a broader correction. 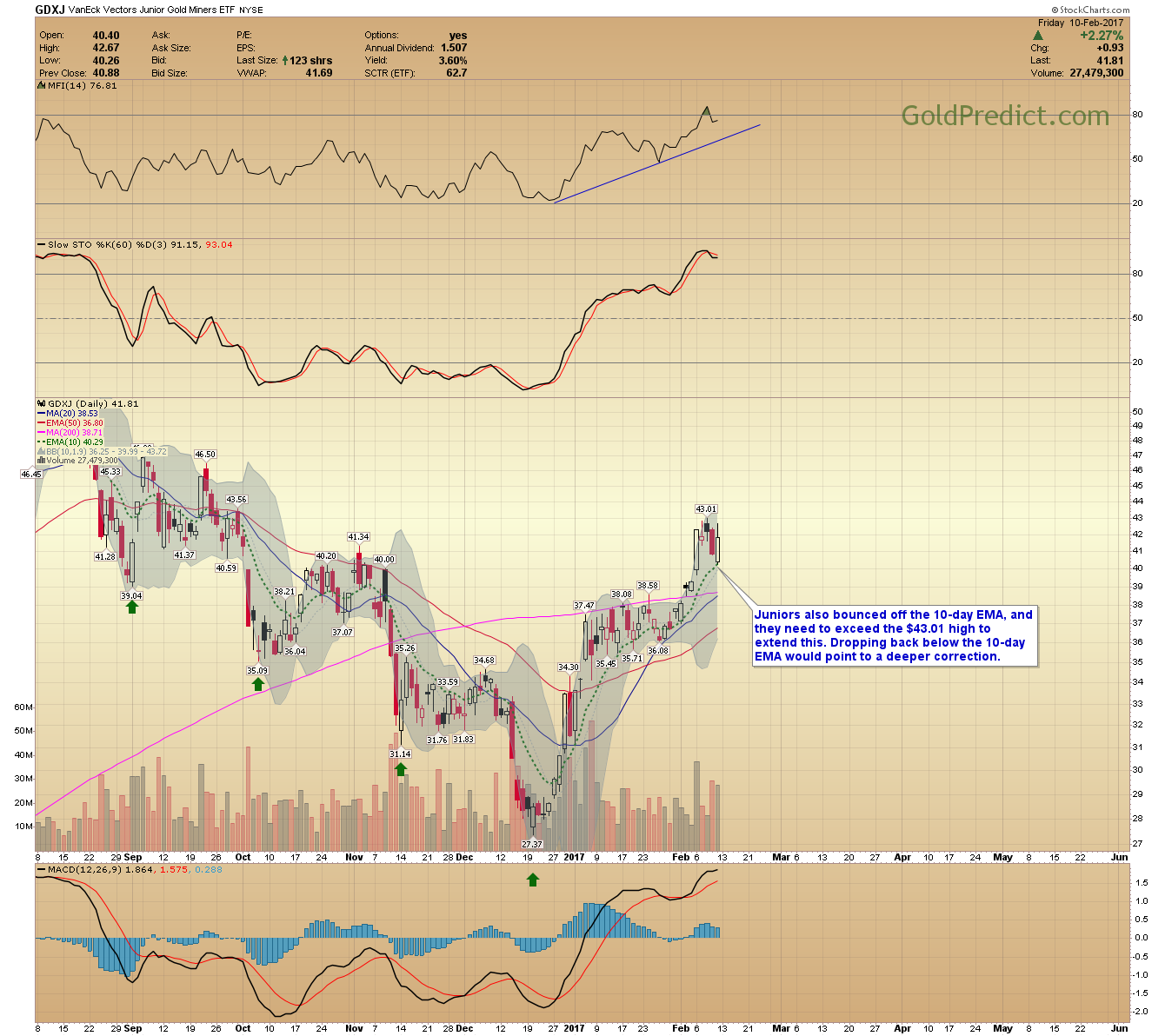 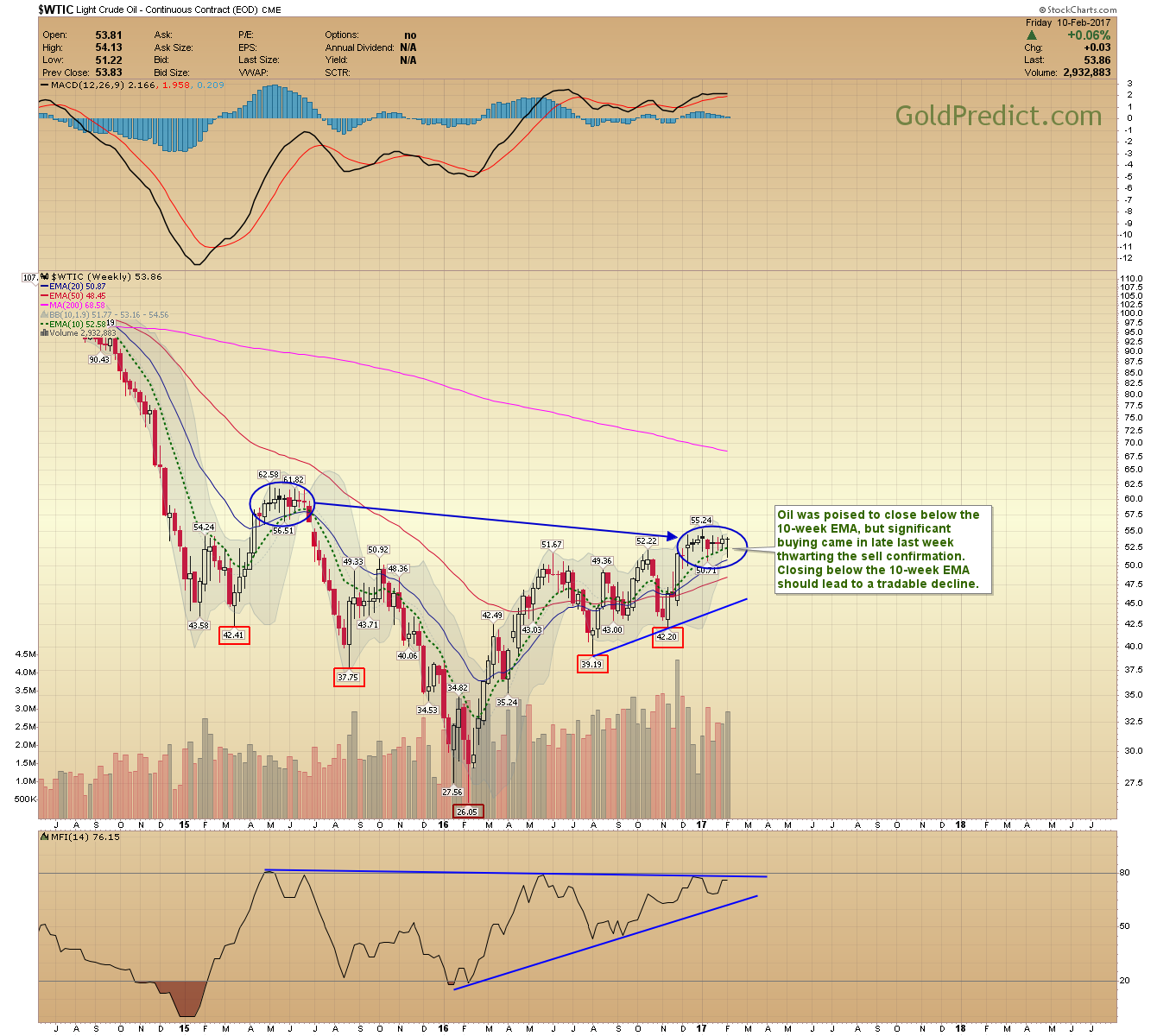 -WTIC DAILY- Prices are at the last line of resistance before testing the $55.24 high. Half of my short position was stopped out for a loss. I raised the stop on the other half to just above the trendline. That too will likely get stopped out.

Provided the $55.24 high isn’t exceeded, I may try another short position later. 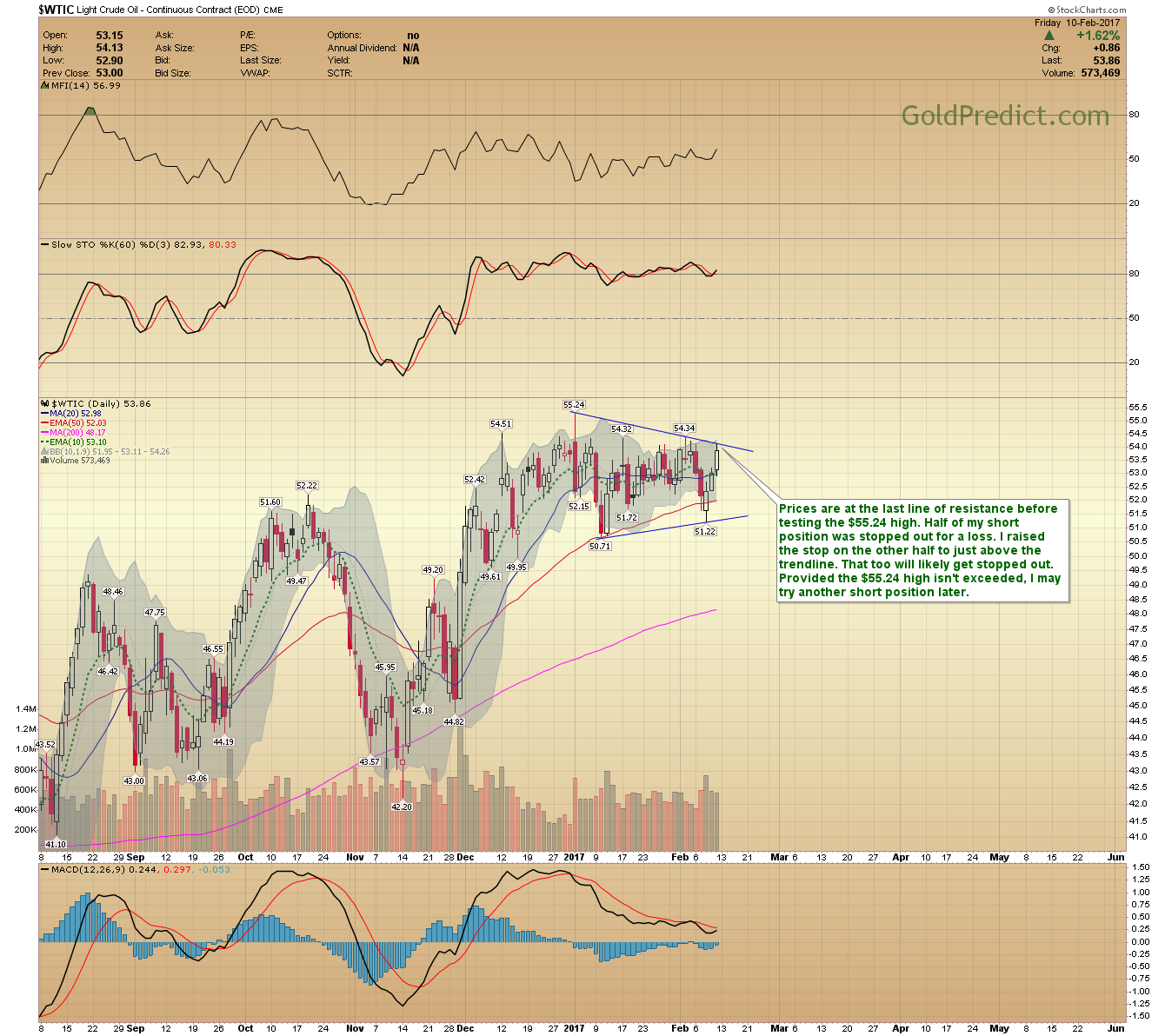 Extended rallies tend to generate sharp breakdowns when they finally correct. Nothing goes straight up, and precious metals will provide a better buying opportunity in the coming weeks/months.

This article was published Posted on February 11, 2017 in Categories Free Updates, Weekend Newsletters