COULD THE 8-YEAR CYCLE STILL BE ALIVE?

A few weeks ago, I noted the divergence forming between metals and miners. Gold and Silver rallied into March, but miners dropped extensively, breaking below their 50-day EMA’s. This behavior is distinctly bearish, and I’m reevaluating the potential for a decline into an 8-year cycle by May or June.

8-YEAR HISTORY- Approximately every 8-years a significant bottom appears in precious metals. In-depth analysis unveiled a fascinating correlation with US Presidential elections. As a matter of fact, the cycle predicted a Republican (Trump) victory. Historically, the 8-year low arrives within a 6-month window encompassing the election, sometimes before but usually after.

CURRENT STRUCTURE- Metals and Miners rallied steadily into February/March, and a test of the $1,045 low became unlikely. That was until miners diverged from precious metal prices in February. Miners have now broken below key support levels, and a bearish trend is developing. The 8-year window remains open through June 2017, so an abrupt decline is still possible.

–QUARTERLY GOLD CHART– Gold prices bottomed at $1,045 in December 2015. Per conventional cycle models, the 2105 low was 8-Months premature. Subsequently, I expected a better buying opportunity closer to the election, February 2017 was ideal.

The 8-Year Cycle averages 30-34 quarters between lows (see chart below). The previous low arrived October 2008. The 34th quarter begins April 1st and runs through June 30th, 2017. Technically we are still within the standard timing window for a low until July 1st. 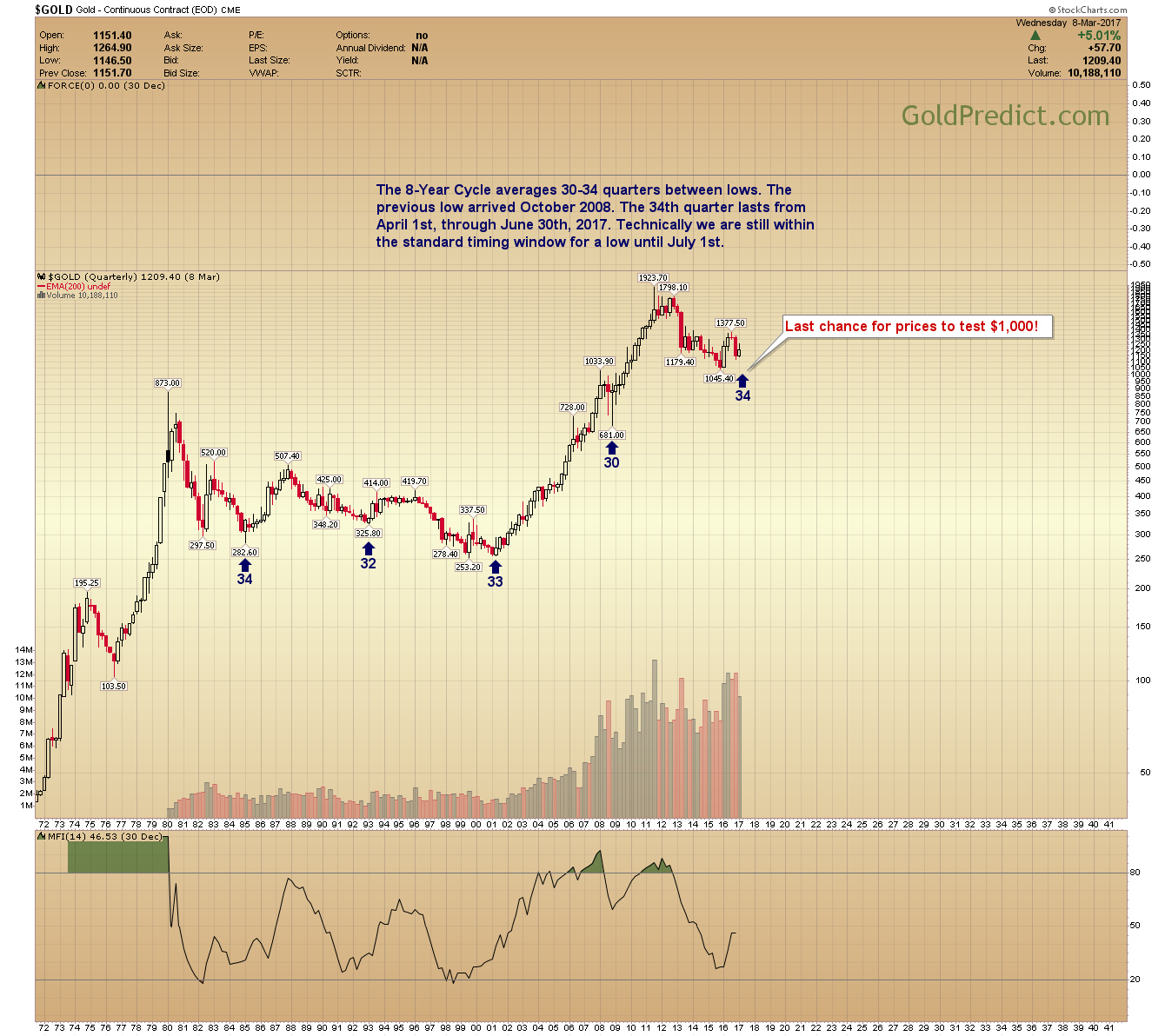 –MONTHLY GOLD CHART- The Monthly chart shows a 97-month average between lows. The 2008 bottom arrived 7-months short of this average (90-Months). Is it possible the current cycle stretches 7-months to balance the series? We will know by June. Note: The 200-Month EMA rests at $996.74. That should support price if we see another drop. Gold’s price performance between now and March 24th will either confirm or deny the potential for a hasty decline. 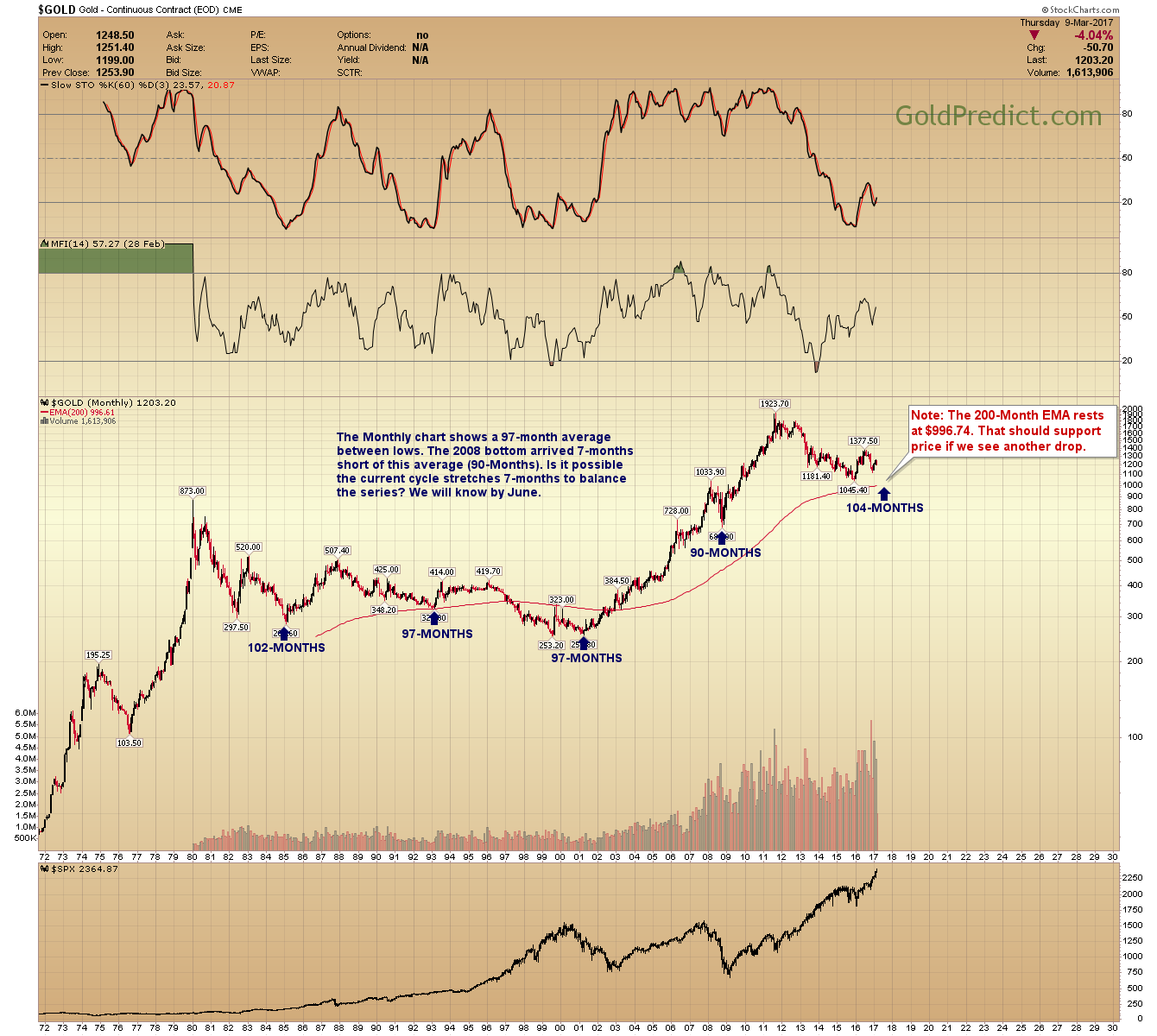 CONCLUSION- My intent is not to frighten precious metal investors. Is a drop to $1,000 guaranteed? No…not even close, but the potential is worth mentioning. The extraordinary divergence and technical breakdown in miners are enough to rationalize caution.

Moreover, I see a possible crisis brewing after the March 15th debt freeze. Remember the Government shut down in October 2013? If politicians don’t reach a deal, the Government could effectively run out of available reserves in June. Potentially, leading to another shutdown and suspension of social programs.

FINAL NOTE: Metals and Miners are rapidly approaching to an intervening low. Price performance after the low will determine the potential for a drop to $1,000 in gold. If prices collapse, anticipate a long-term buying opportunity in May/June. The second half of 2017 should see rising prices, followed by even better returns in 2018.

This article was published Posted on March 10, 2017 in Categories Free Updates