The dollar broke key technical support during the 7-Month decline. Consequently, a multi-year bear market has likely begun. After a brief recovery, the dollar should resume the downtrend.

Our forecast calls for a decline in Gold below $1,200 as the dollar recovers. Several cycles converge and support a low in September or early October. If fulfilled, Gold will produce a meaningful bottom and begin the second leg of a multi-year bull market advance.

-US DOLLAR WEEKLY- The Dollar spiked down to touch the 200-week MA and bounced forming a bullish reversal candle. We should finally get a 4-8 week bounce.

-GOLD WEEKLY- Our forecast calls for a drop below $1,200 as the dollar completes an intermediate-term rally. Gold should remain above the December $1,124.30 low. We expect the correction to end in September/October. Once complete, metals and miners will enter the second leg of a multi-year bull market.

-GOLD DAILY- Prices formed a swing high and closed below the 10-day EMA. Steps one and two in building a top are complete. Producing a second red candle close beneath Friday’s close is the third and final step in establishing a top. Once a top is confirmed, we expect prices to descend below $1,200 with a minimum target of $1,188. 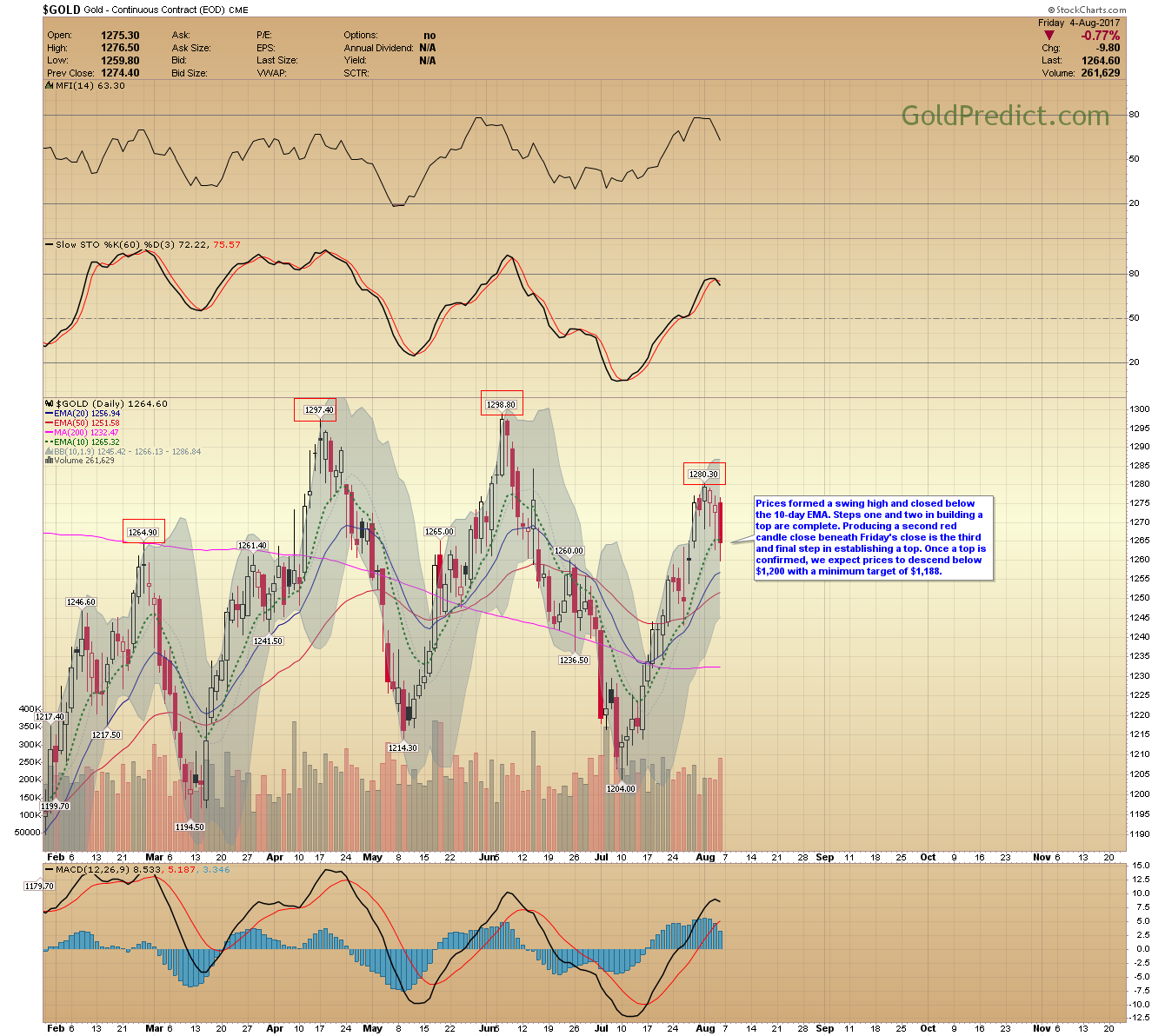 -SILVER WEEKLY- A weekly bearish engulfing candle formed. If our analysis concerning gold is correct, silver should test the July $14.34 spike low and perhaps the $13.62 zone before bottoming in September/October. 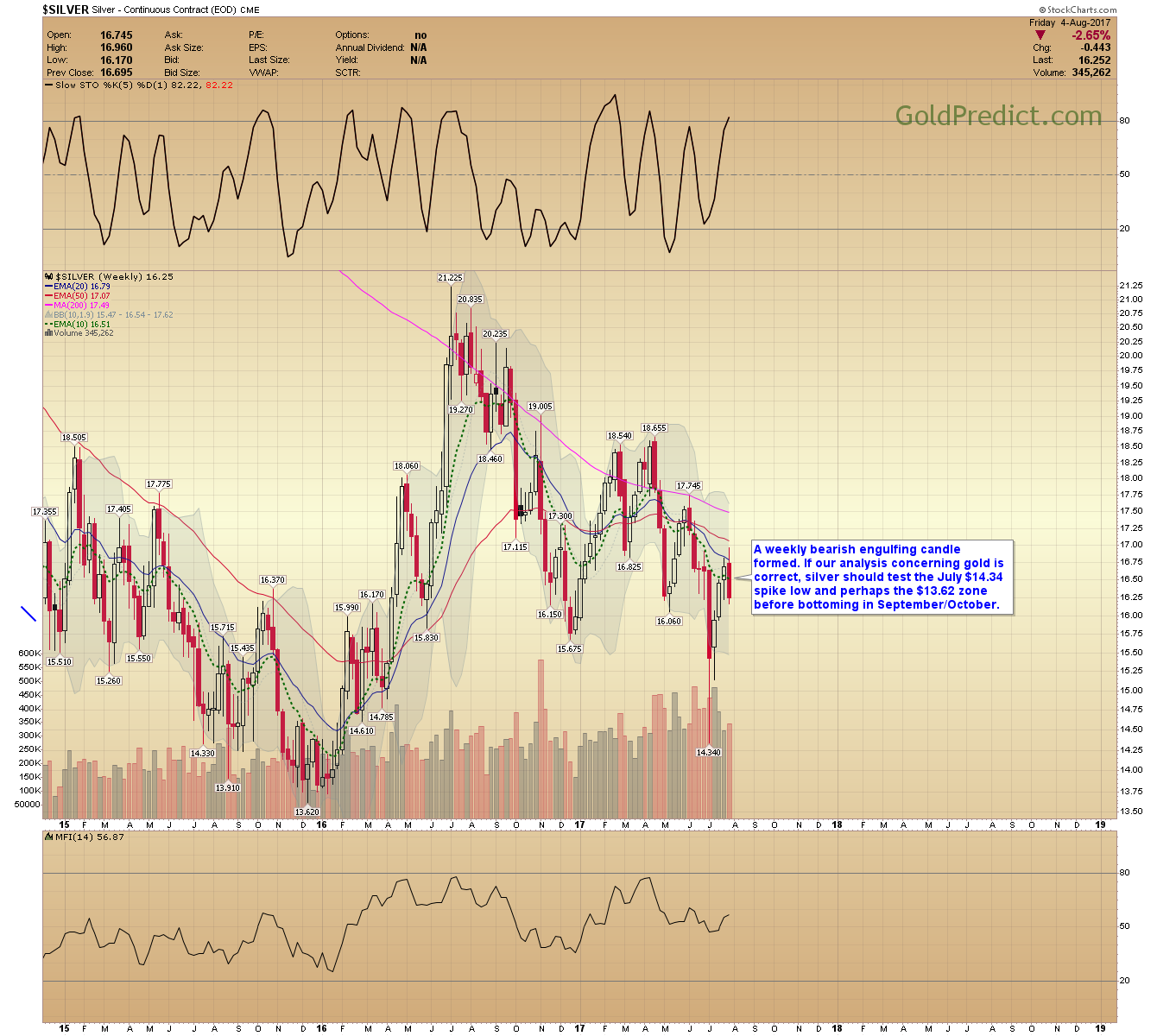 -SILVER DAILY- Like gold, prices formed a swing high and closed below the 10-day EMA. I’d like to see one more close beneath Friday’s $16.25 close before marking the top officially. 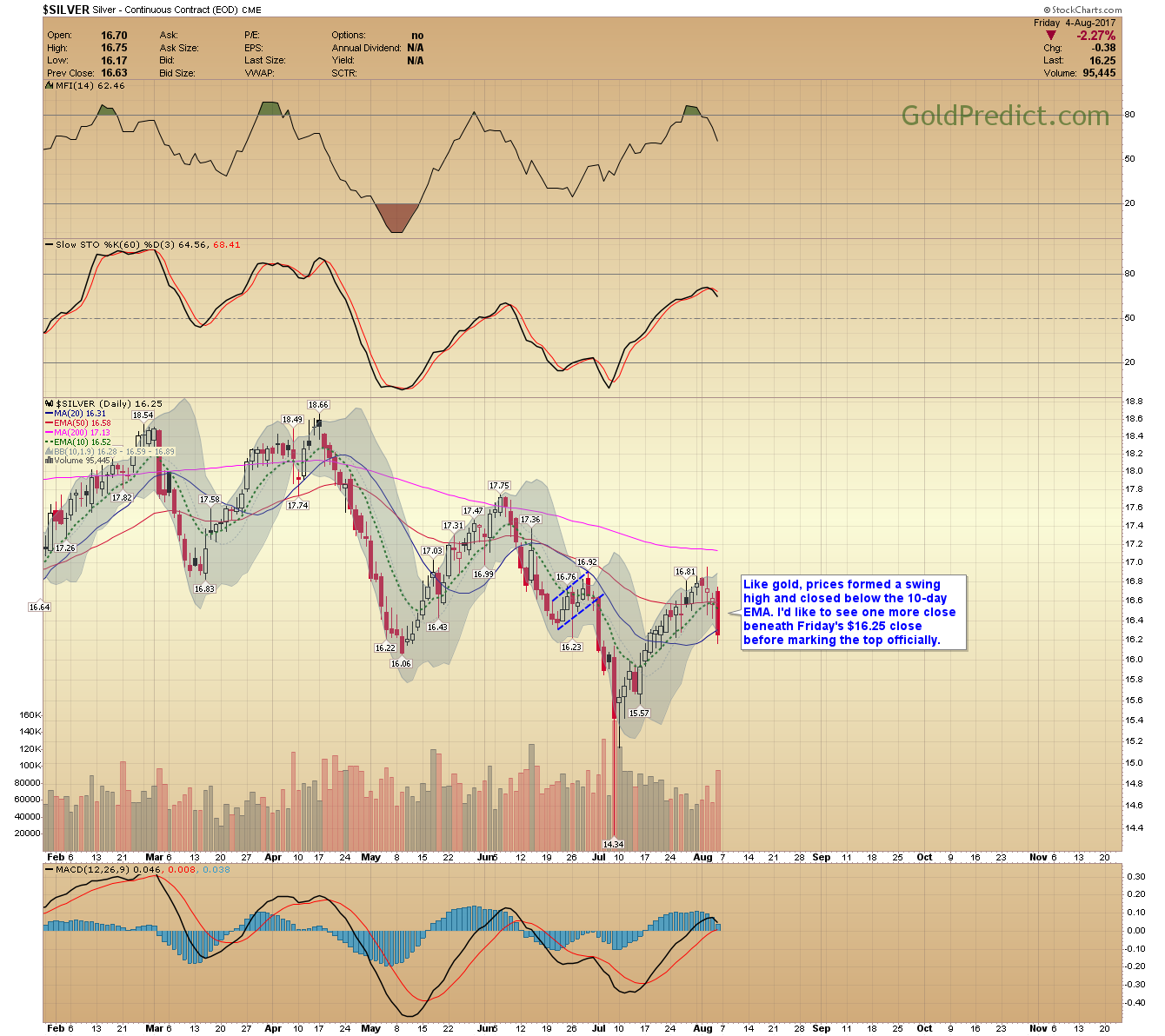 -GDX- Prices broke lower from the consolidation zone, and the descending triangle pattern continues. If gold drops below $1,200 as forecasted, miners should break support at $21.00 and test the $18.58 low before bottoming. 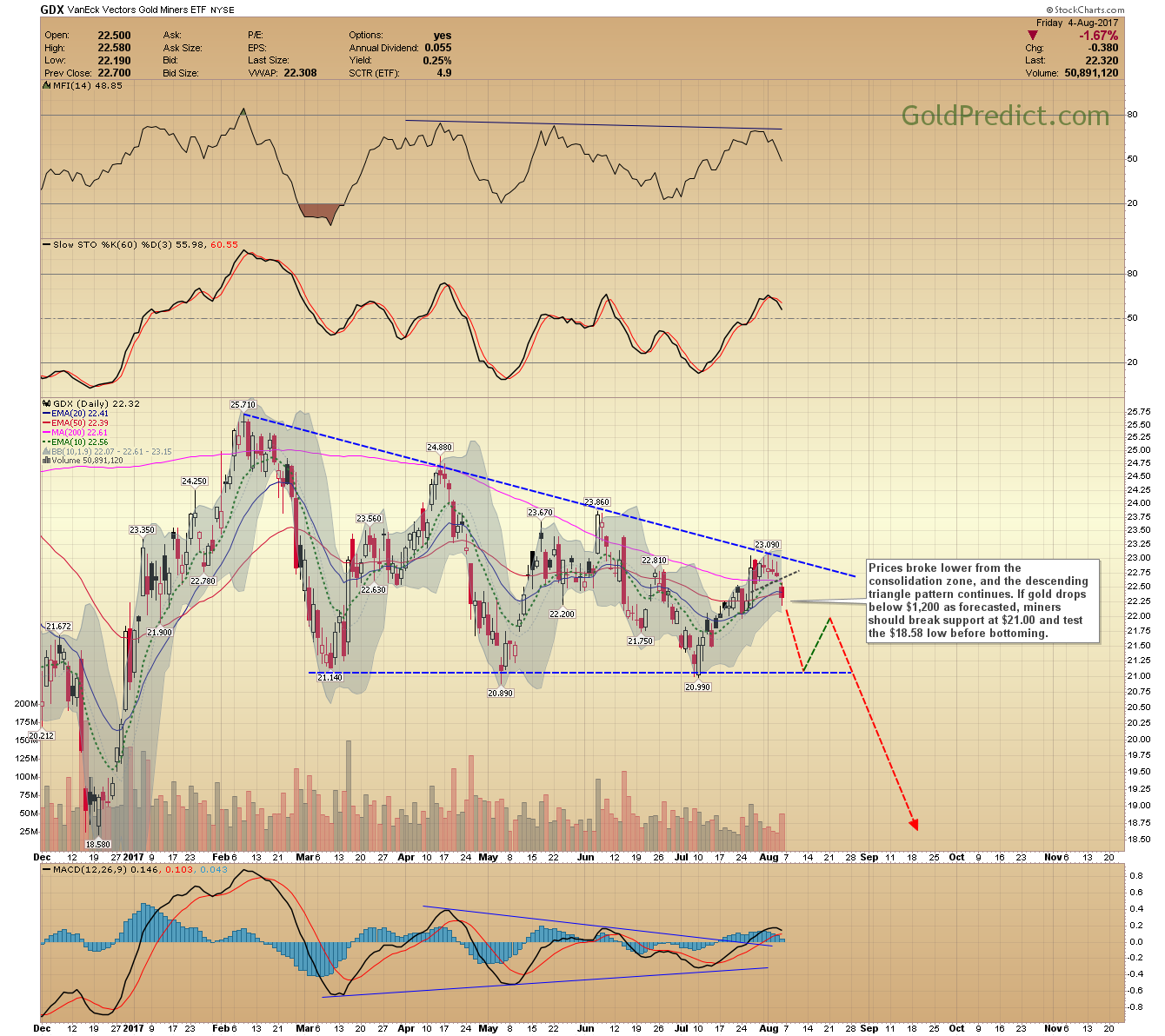 -GDXJ- The major restructuring skewed the junior mining chart. Nevertheless, prices appear to be approaching a significant trendline. If gold drops below $1,200, then GDXJ should test or break the December $27.37 low. The dividend yield of 4.65% is becoming attractive. We could see a dividend yield of 5.5% or more if prices test $27.37. 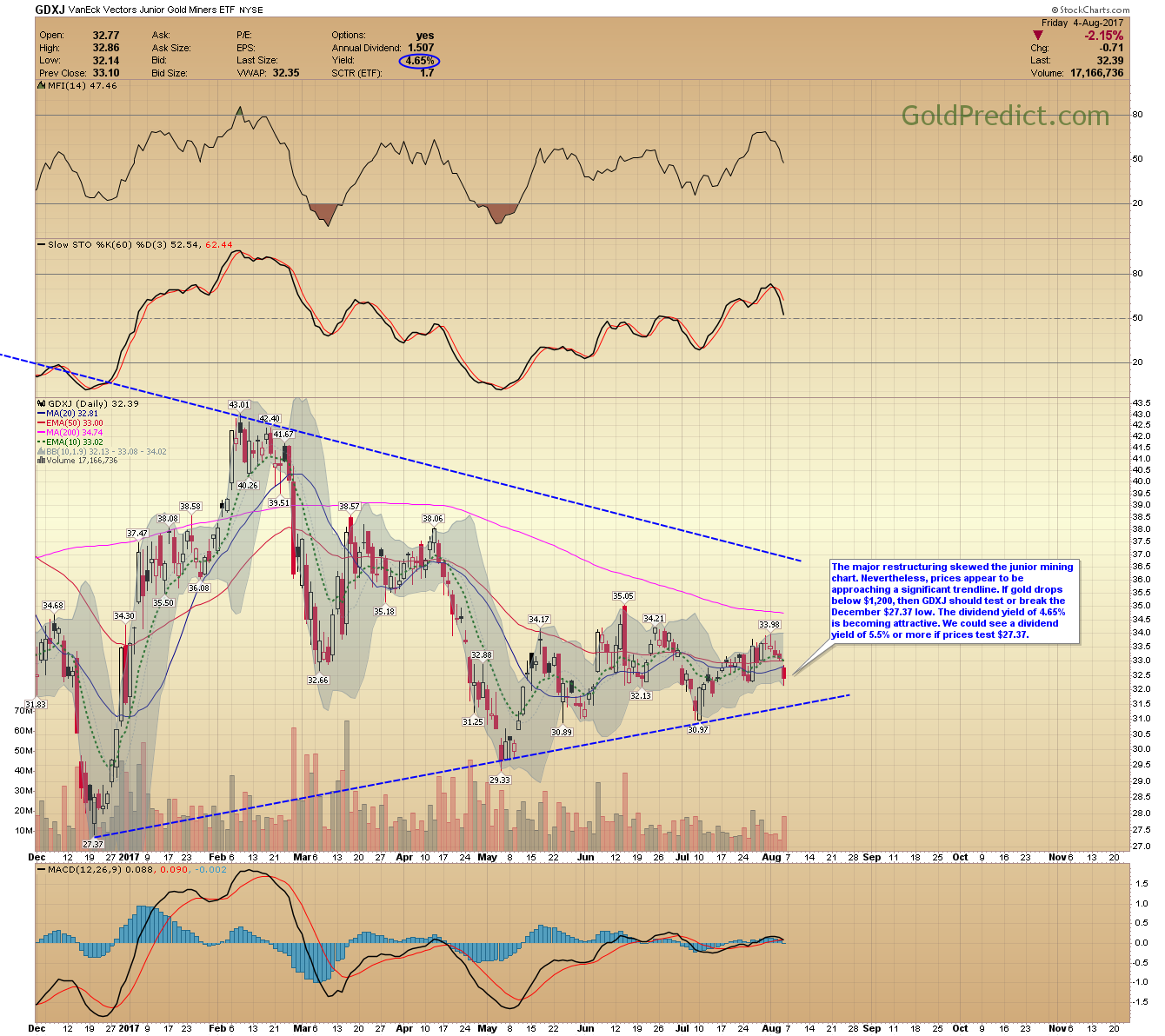 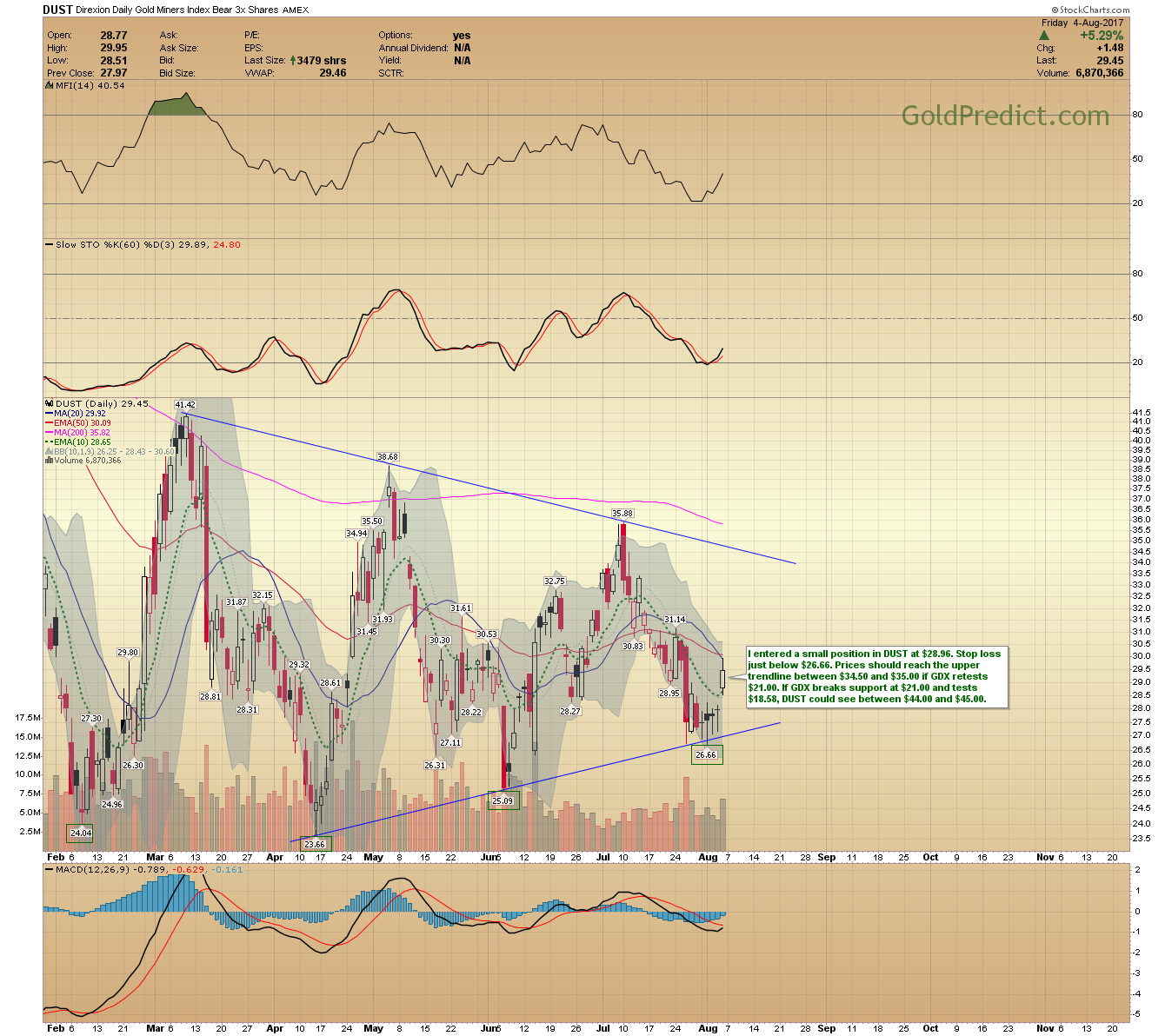 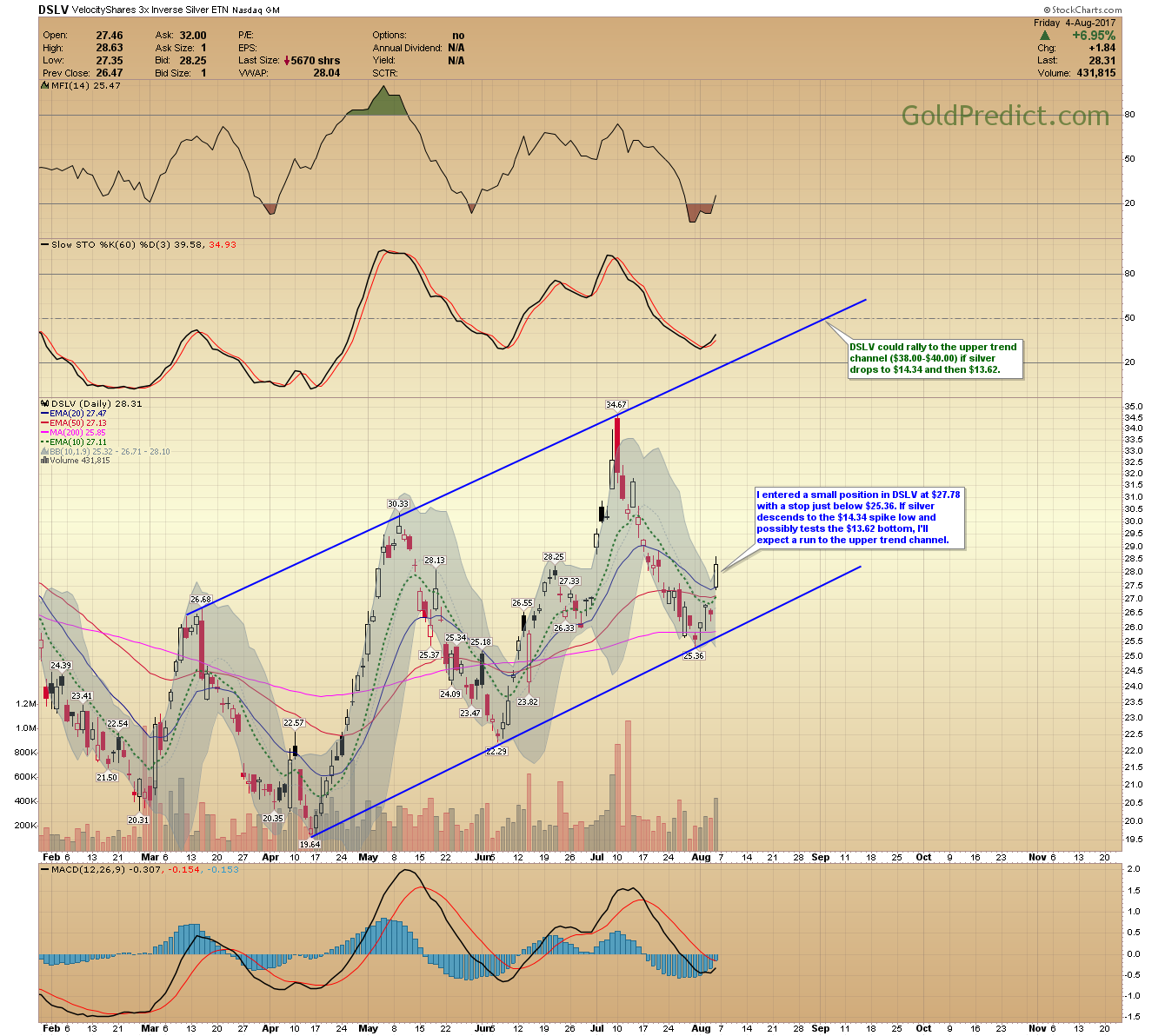 -SPY- Prices are still crawling along the 10-day EMA. These crawl patterns usually end with a sudden/sharp decline. Support is around 245. I still think we will see 250 struck before a larger correction takes hold.

-WTIC- Oil is holding the 10-day EMA, closing below it will fortify a top. If prices don’t breakdown soon, we could see a swift spike to $51.00 before the trend rolls over.

-SCO- I’ll feel more comfortable with the SCO trade if prices rally and close above the 200-day MA ($38.33). Otherwise, we might see a quick drop that better tests the trendline before a tradable rally. 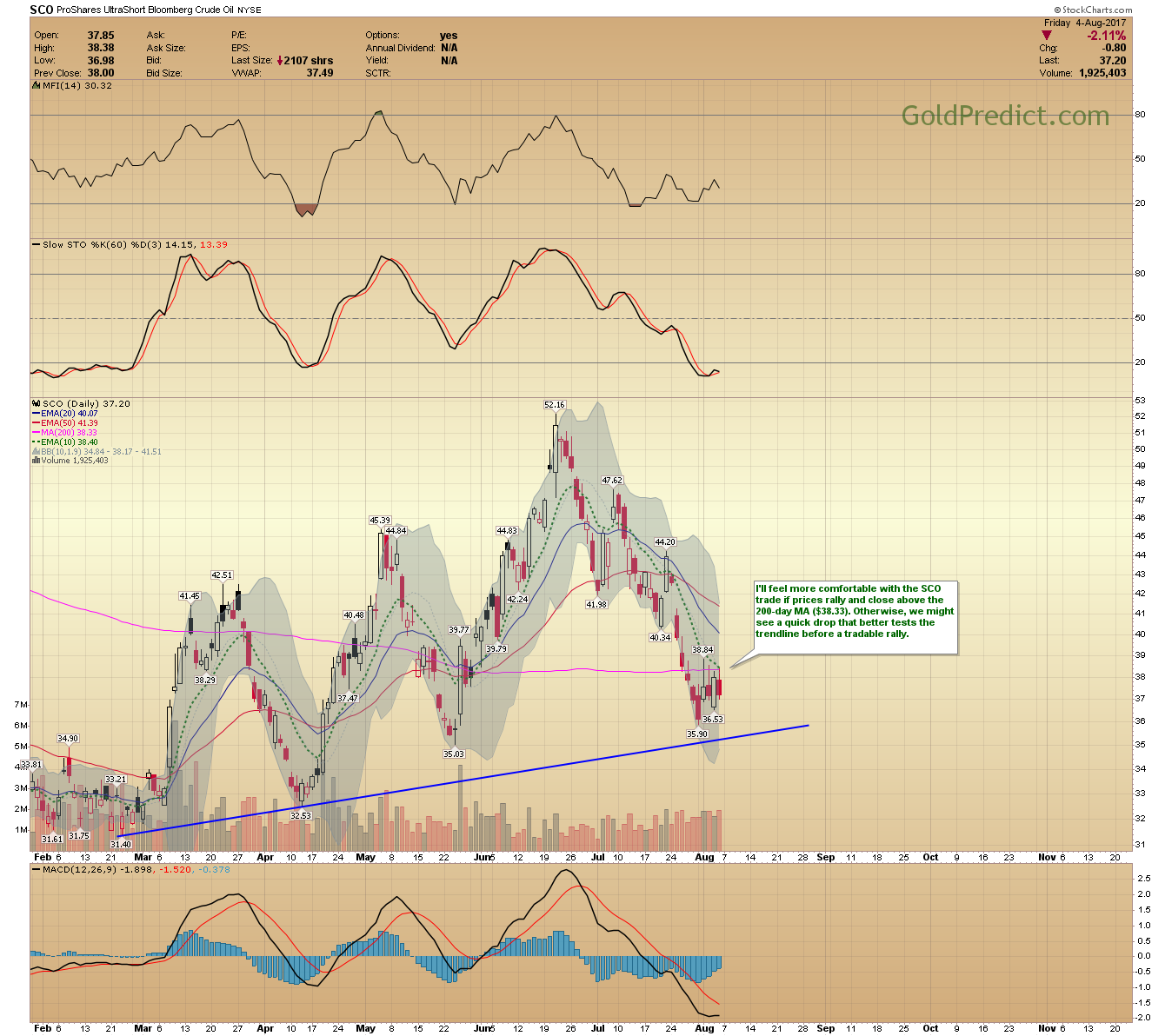 Friday’s price action in metals and miners helped our outlook. However, I’d like to see prices close progressively lower beneath their 10-day EMA’s before approving cycle peaks. I’ll update throughout the week as the structure unfolds.

This article was published Posted on August 5, 2017 in Categories Free Updates, Weekend Newsletters