It’s been one fake-out after another in the precious metal sector. Investors have been awaiting a major breakout in gold once prices climbed above $1,300. Friday’s rally reached $1,306.90 and promptly reversed, potentially creating a bull trap. Likewise with miners. GDX gapped higher in the morning only to end below the previous days low. The bearish outside reversal day warns of a viable top.

Follow through is key. If metals and miners close significantly lower on Monday, a top is likely. Closing below the 10-day EMA this late in the cycle should be enough to secure a top. If confirmed, I’ll estimate correction targets and expect a 1-2 week correction (maybe more) into the daily cycle low.

-US DOLLAR- The dollars price structure resembles more of a consolidation (possible bear flag) than an intermediate-term advance. Prices need to rally above 94.06 next week, or risk breaking lower.

-GOLD WEEKLY- Prices attempted to close the week above $1,298.80, but sellers entered the market after breaking above $1,300. Nonetheless, the 6-Month cycle low likely arrived at $1,204 in July. The initial rally from the July low is probably over, and we should see (at least) a 1-2 week pullback. 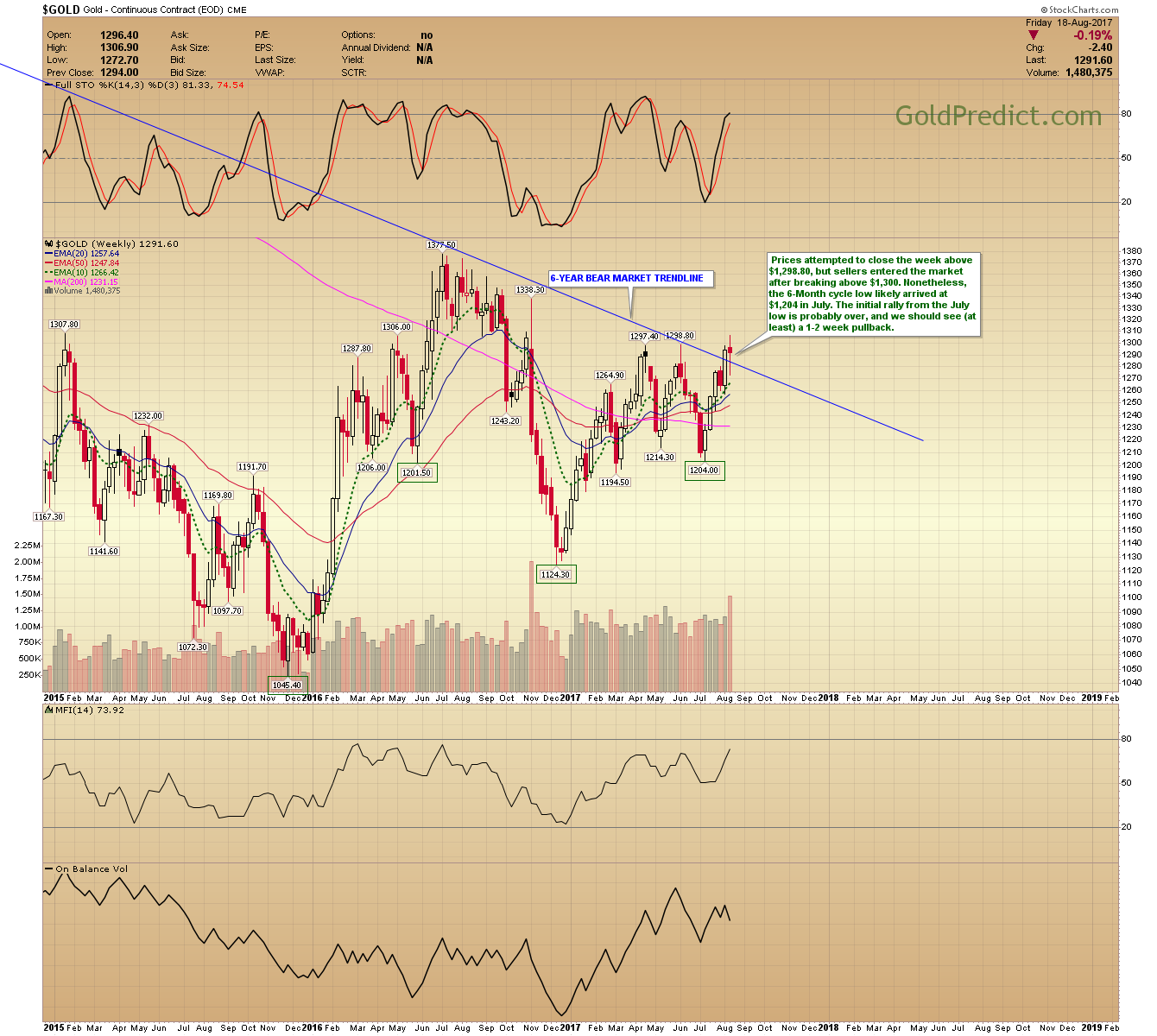 -GOLD DAILY- In the 8/13/2017 Newsletter I wrote- “Last weeks correction was merely a half-cycle consolidation and not the cycle top. The previous series topped between 12 and 13 trading days after the half cycle peak, in this case, $1,280.30. If the relationship persists, this cycle should top next week (perhaps late) followed by a correction into the first daily cycle low.”

The week started with a false breakdown consisting of a bearish engulfing candle and close below the half-cycle peak of $1,280.30. However, there was no follow through, and prices reversed back towards the $1,298 high. The rally eventually broke above $1,300 on Friday reaching an intraday high of $1,306.90 before reversing.

It appears my expectation for the daily cycle to top late last week may have been fulfilled. Friday marked the 13th trading day after the half-cycle peak and prices formed a bearish reversal. Closing below the 10-day EMA will validate our analysis and prices should correct for 1-2 weeks. I’ll estimate possible targets once the daily cycle top is confirmed. 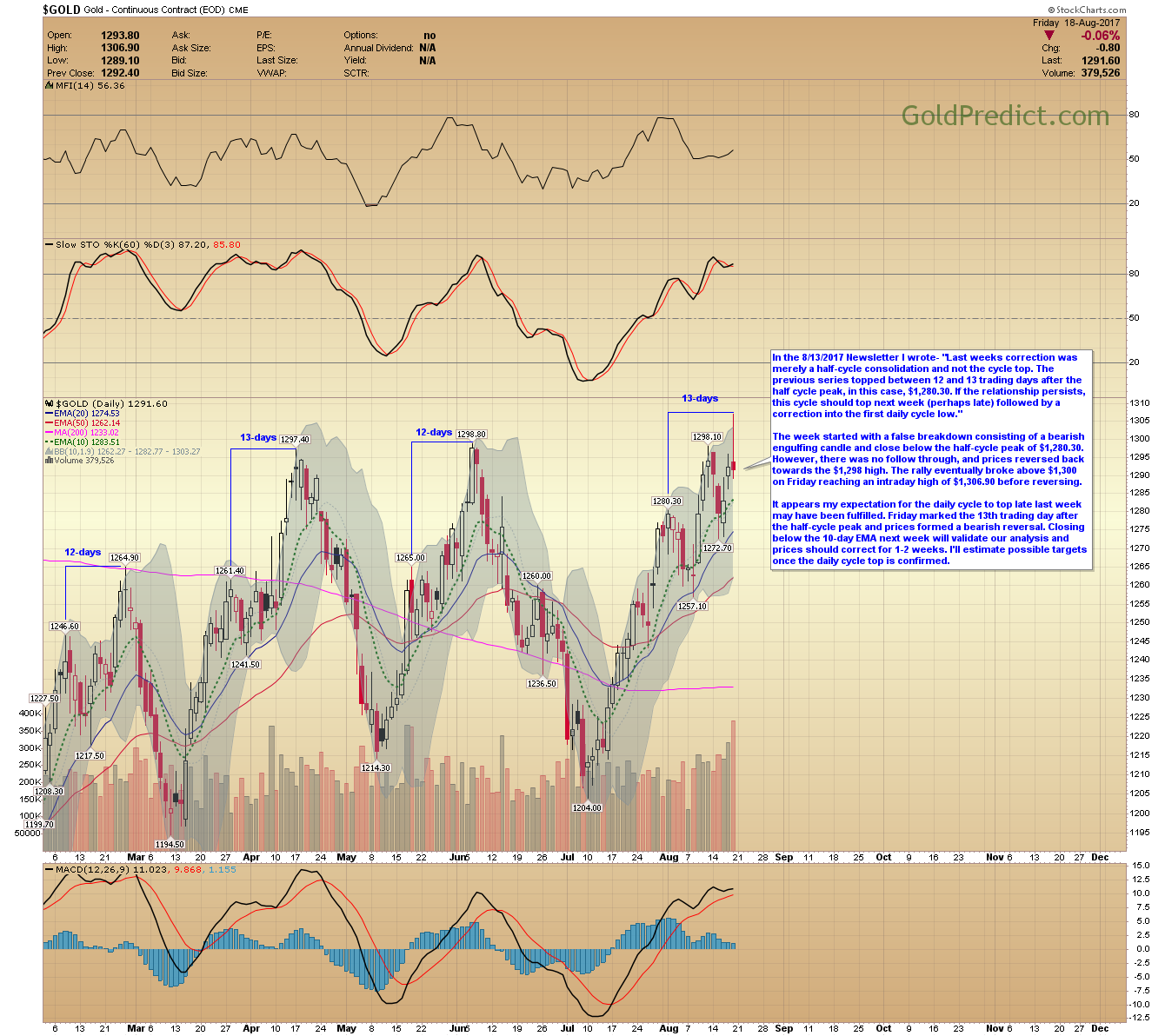 -SILVER- Prices spiked to $17.32 before reversing on Friday. There is a consolidation occurring between the 200-day and 10-day averages. A daily close above $17.24 will project more upside, whereas closing below $16.85 will register a top and subsequent correction. 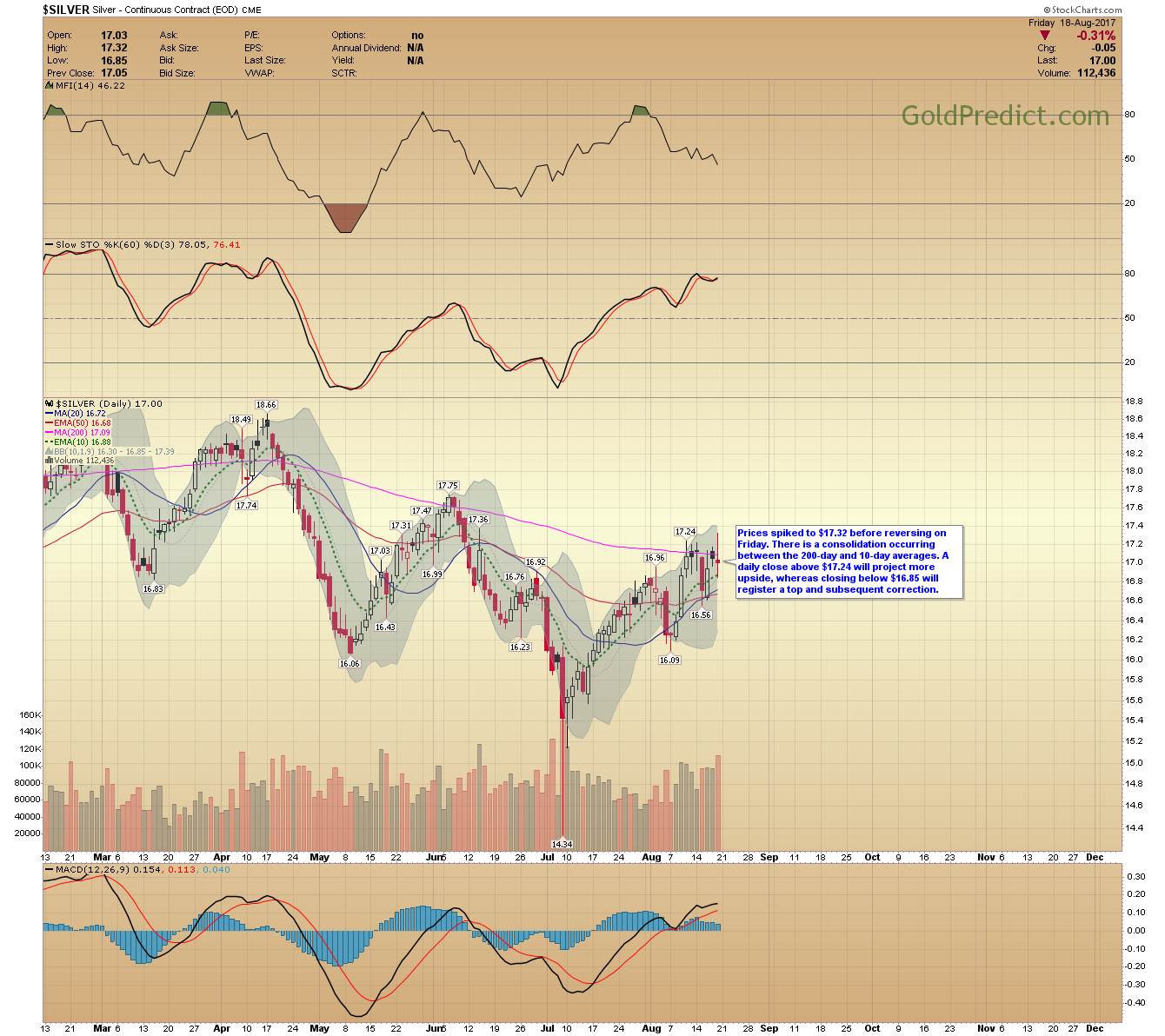 -GDX- Miners gapped higher Friday morning only to close below Thursday’s low casting a bearish outside reversal. A daily close below $22.83 (10-day EMA) will endorse a top and prices should descend back to support near $21.00. The upper trendline boundary has been unclear. Friday’s sharp reversal established a solid point of reference. 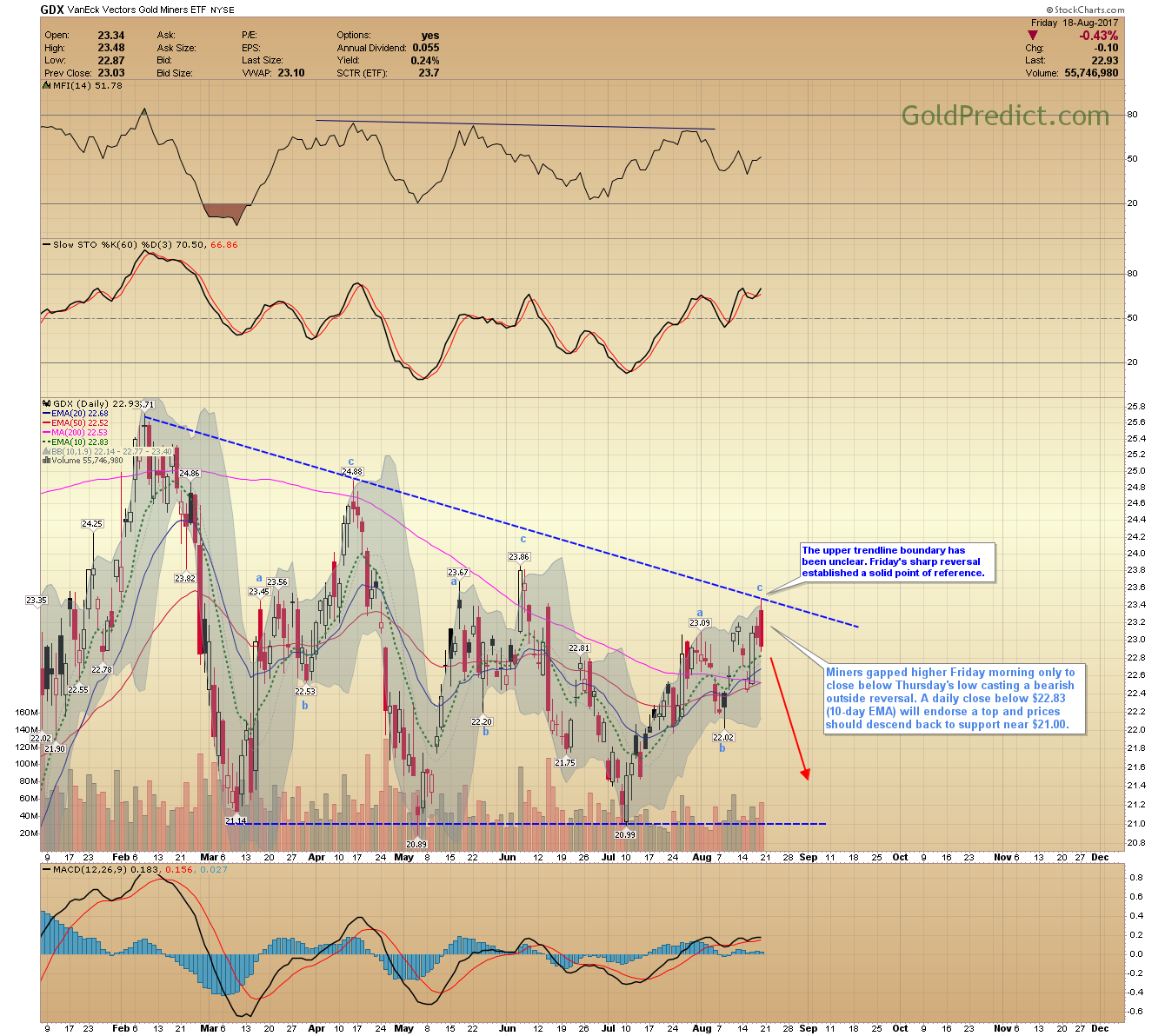 -GDXJ- One can almost discern an ascending triangle formation in the junior mining ETF. If metals and mines topped on Friday, prices should break below the lower trendline. However, breaking above the upper trendline and subsequent 200-day MA would indicate a breakout, and I’d buy junior miners. 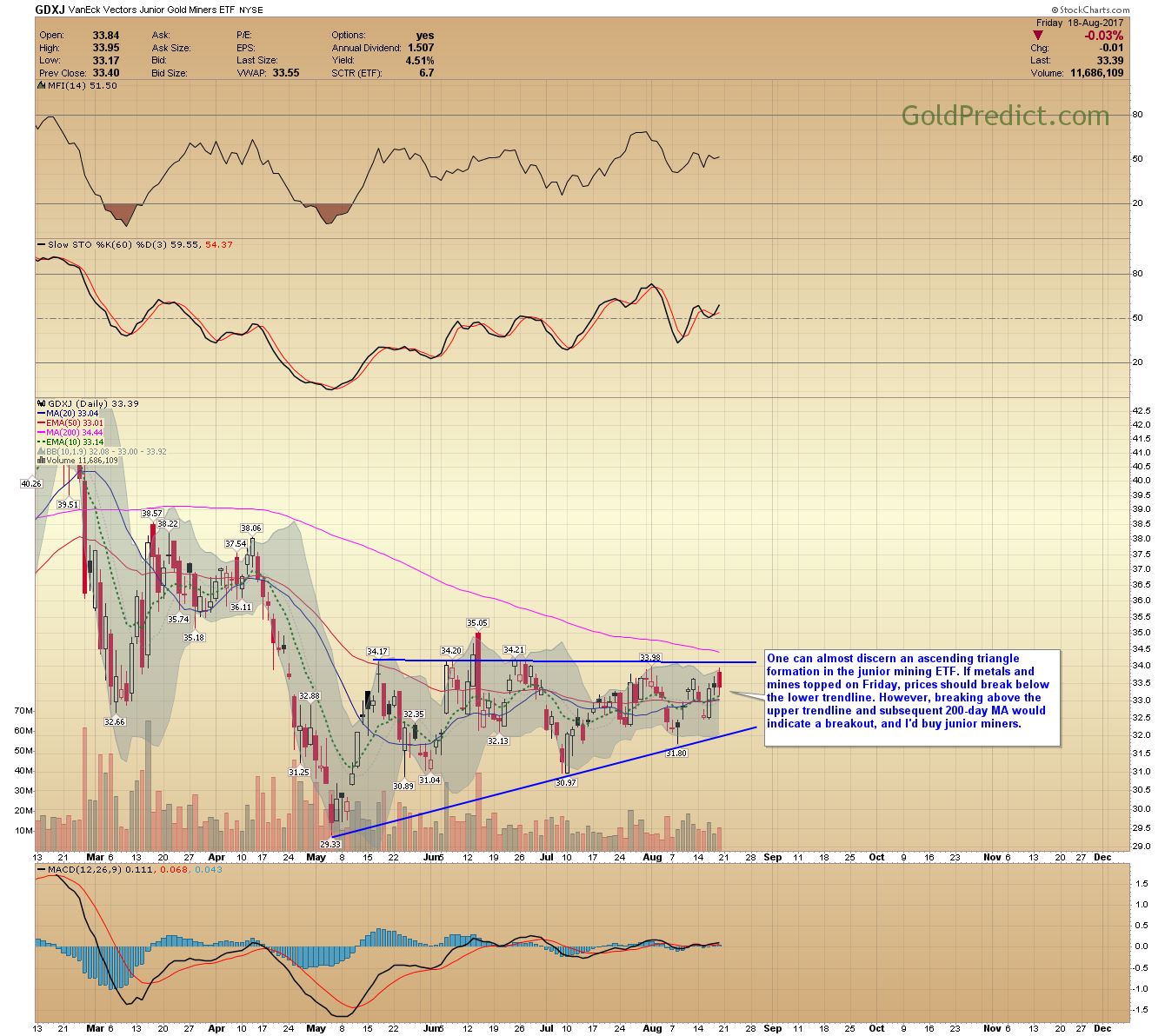 -DUST- Prices made a keen bullish reversal. Closing above $27.43 would suggest a low and potential rally to the upper trendline. 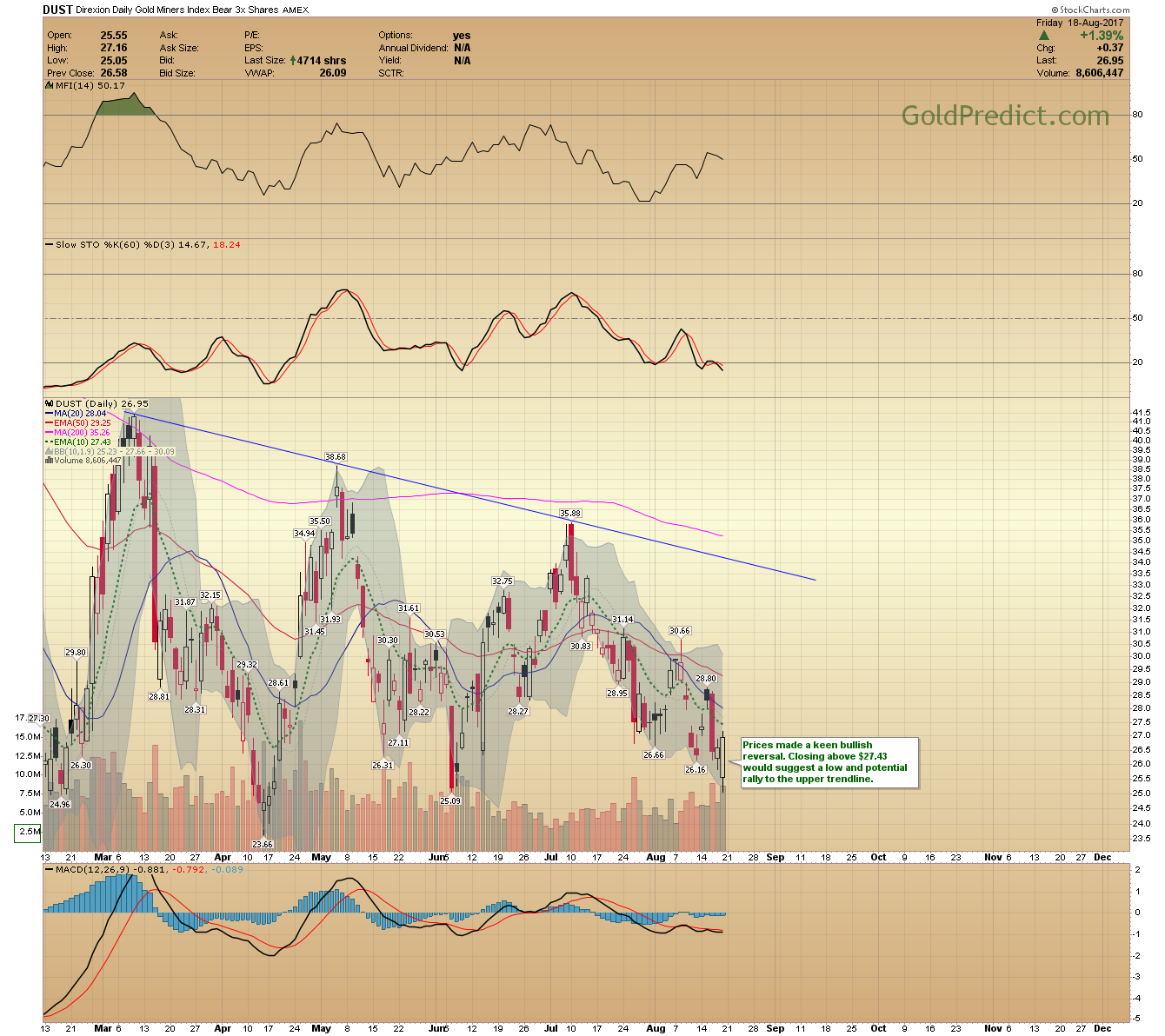 -JDST- Friday’s reversal wasn’t as sharp in JDST. Nevertheless, closing above $62.78 would suggest a bottom.

-SPY- Stocks closed the gap from July and stopped at the precise measurement for an ABC style correction. Closing back above the 50-day EMA (244.26) will promote a rally to 250+. However, closing below 240 will forecast a deeper correction. 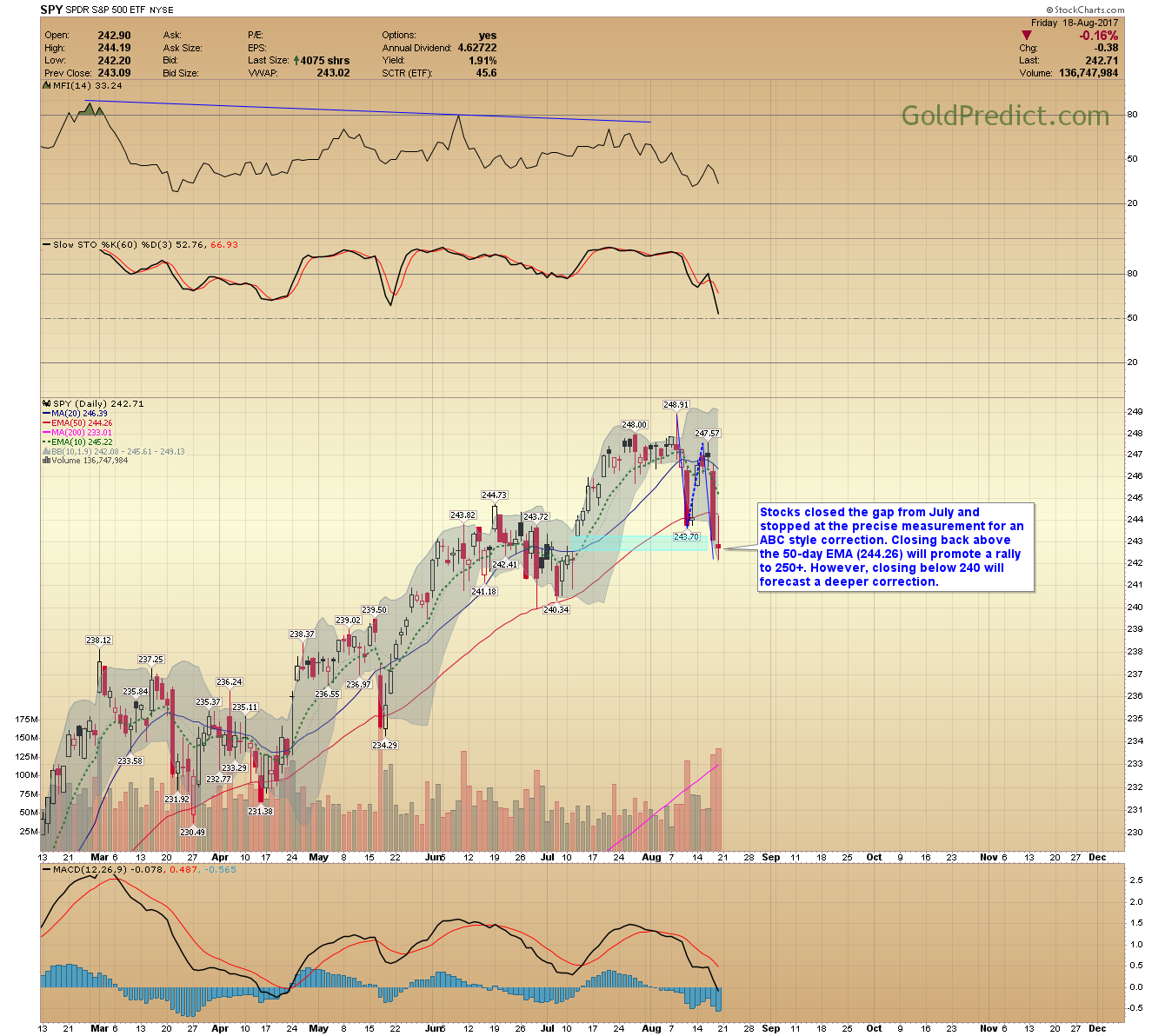 -WTIC- Oil prices jumped 3.33% Friday amid unconfirmed reports of a shutdown at Exxon Mobiles Baytown, Texas refinery. It may be just a knee-jerk reaction, but I’m taking is serious. A daily close back above the $49.00 level will be enough to jettison the SCO position. 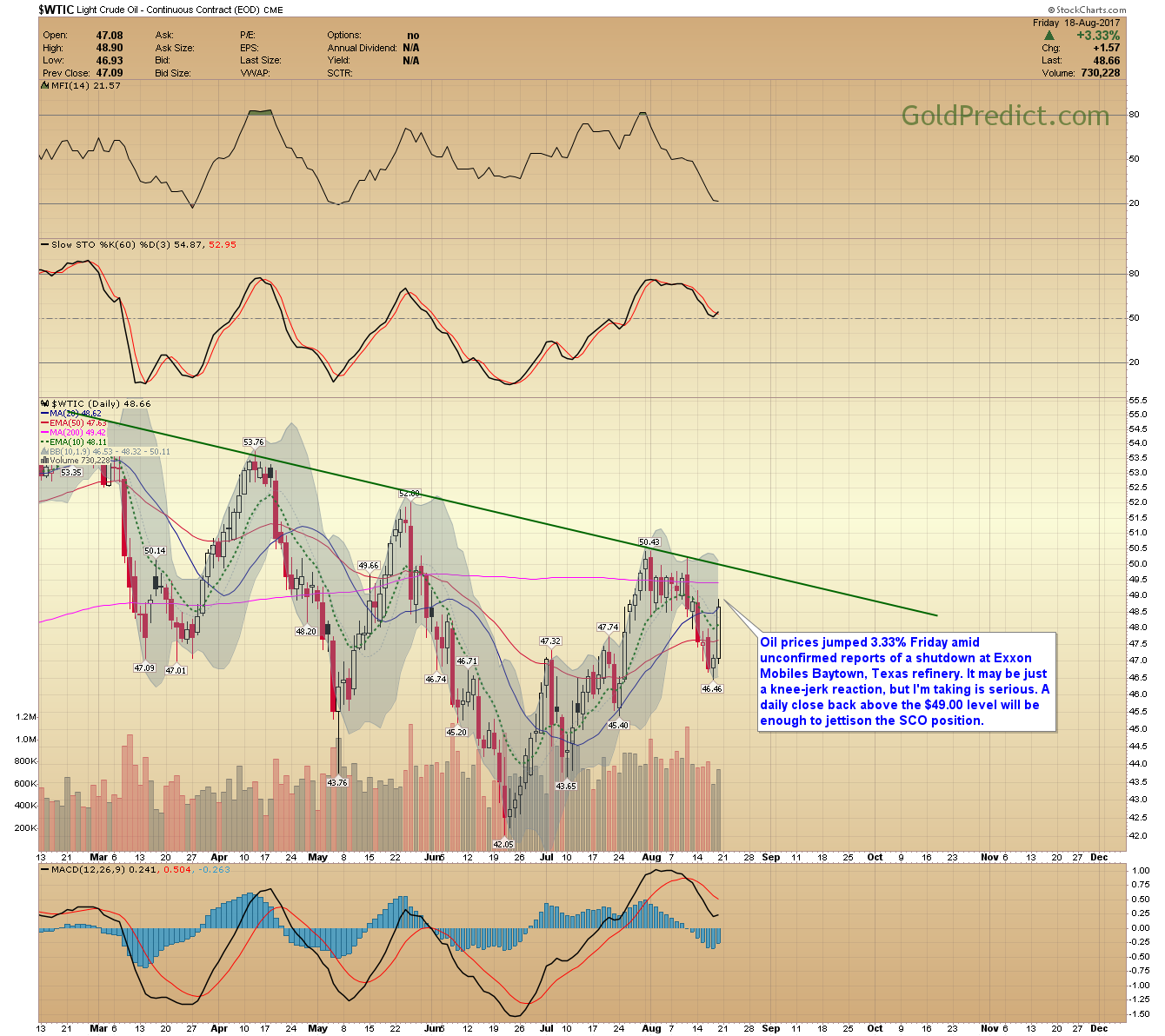 -SCO- Nearly all of last weeks gains were wiped out on Friday. I’d hate to see this turn into a losing trade (entry at $38.00). I’ll monitor it carefully and sell if I don’t like what I see. 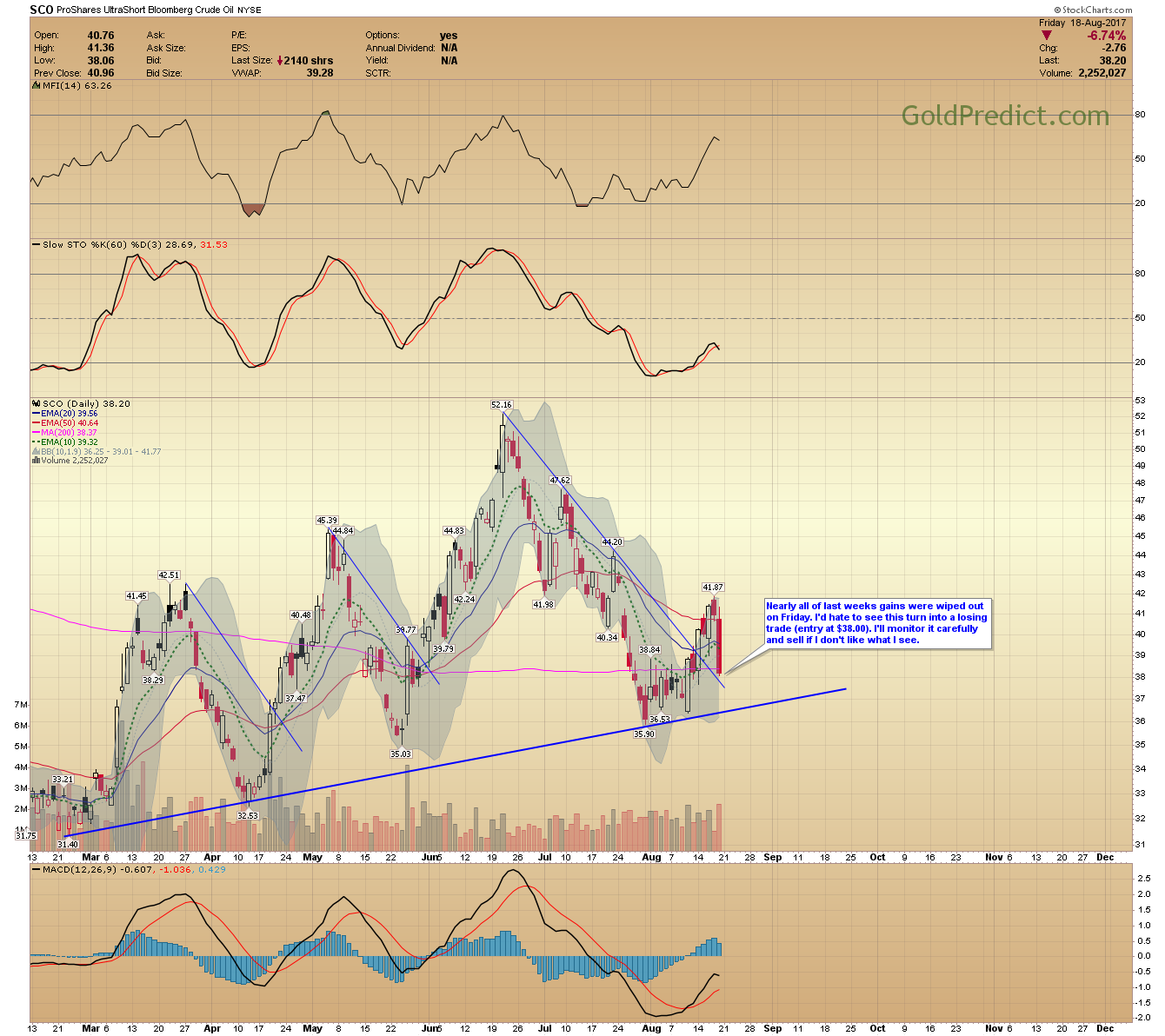 -DSLV- I’m keeping a tight leash on the DSLV trade. I’ll exit the position if spot silver rallies back above Friday’s $17.32 high. 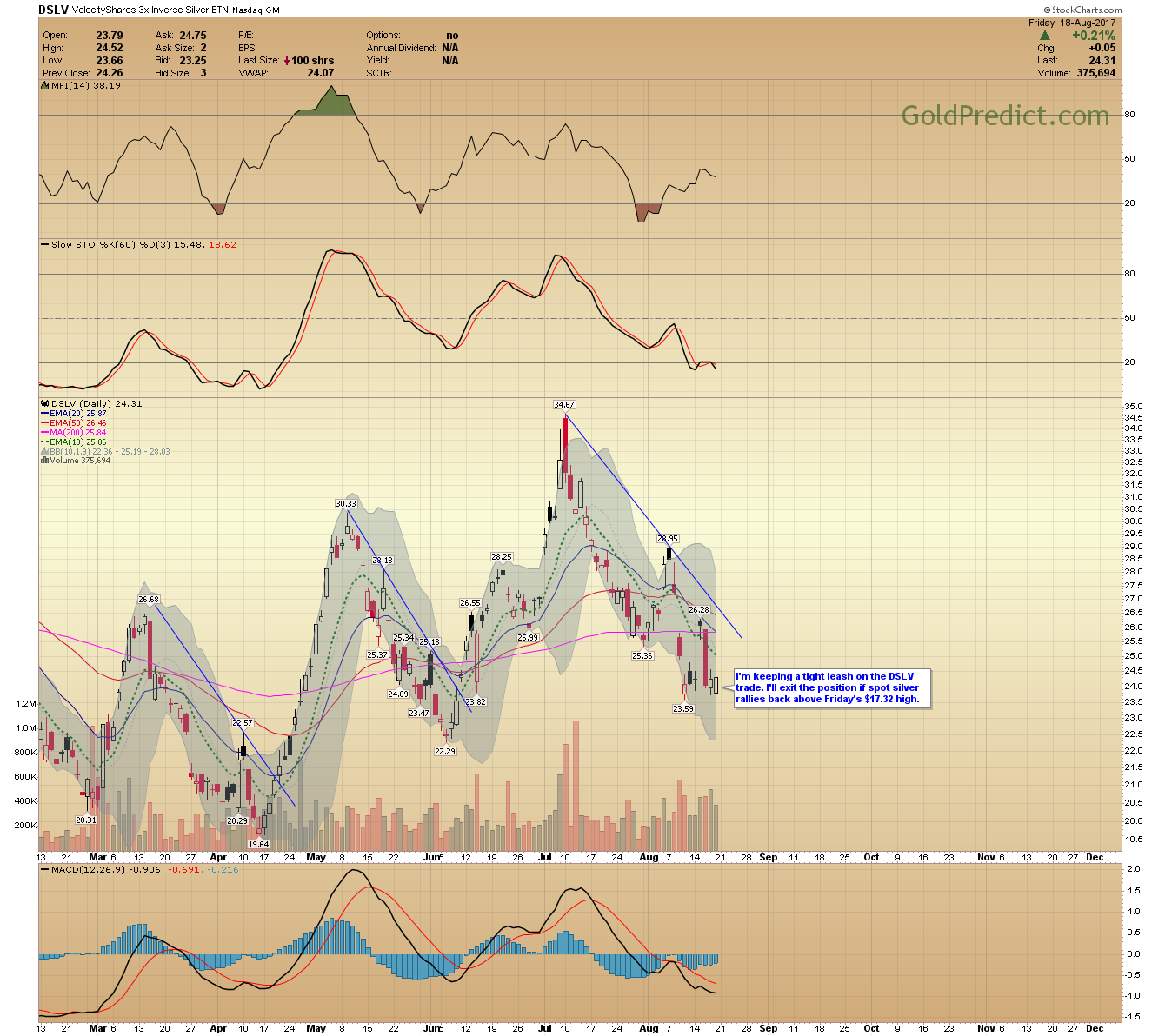 The situation is incredibly fluid, expect the unexpected. It’s important not to over-commit or marry ourselves to a particular outcome. If miners breakout from their consolidation patterns, I’ll issue a buy signal. Until then, GDX has the potential to sink back to the $21.00 level. If GDX breaks support at $21.00, we could see $18.50 or lower.

This article was published Posted on August 19, 2017 in Categories Weekend Newsletters