Gold is inching closer to the October low. It’s been 20-trading days since the previous low (October 6th), and I see two potential outcomes.

Scenario 1- Gold formed a short-term top on Thursday, the 19th trading day. If so, prices should break the October low ($1,262) and proceed lower.

Scenario 2- Gold is yet to form a cycle low, and prices will bottom next week. In this scenario, gold would probably break the October low, reverse, and then rally back above $1,262.

To determine the proper cycle count I need to see how gold responds after breaking the October low (if that occurs).

A sustained breakdown in gold below $1,262 (scenario 1) will support a retest of $1,200. There is significant support around $1,180 if prices slide below $1,200. Estimating targets for silver and miners is much trickier. I won’t be able to calculate price objectives until the structure matures.

-US DOLLAR- Prices formed a bullish hammer after backtesting the neckline at 94.10. Closing above 95.00 will set a path to the rebound target. A dollar rally should correlate with declining gold prices. 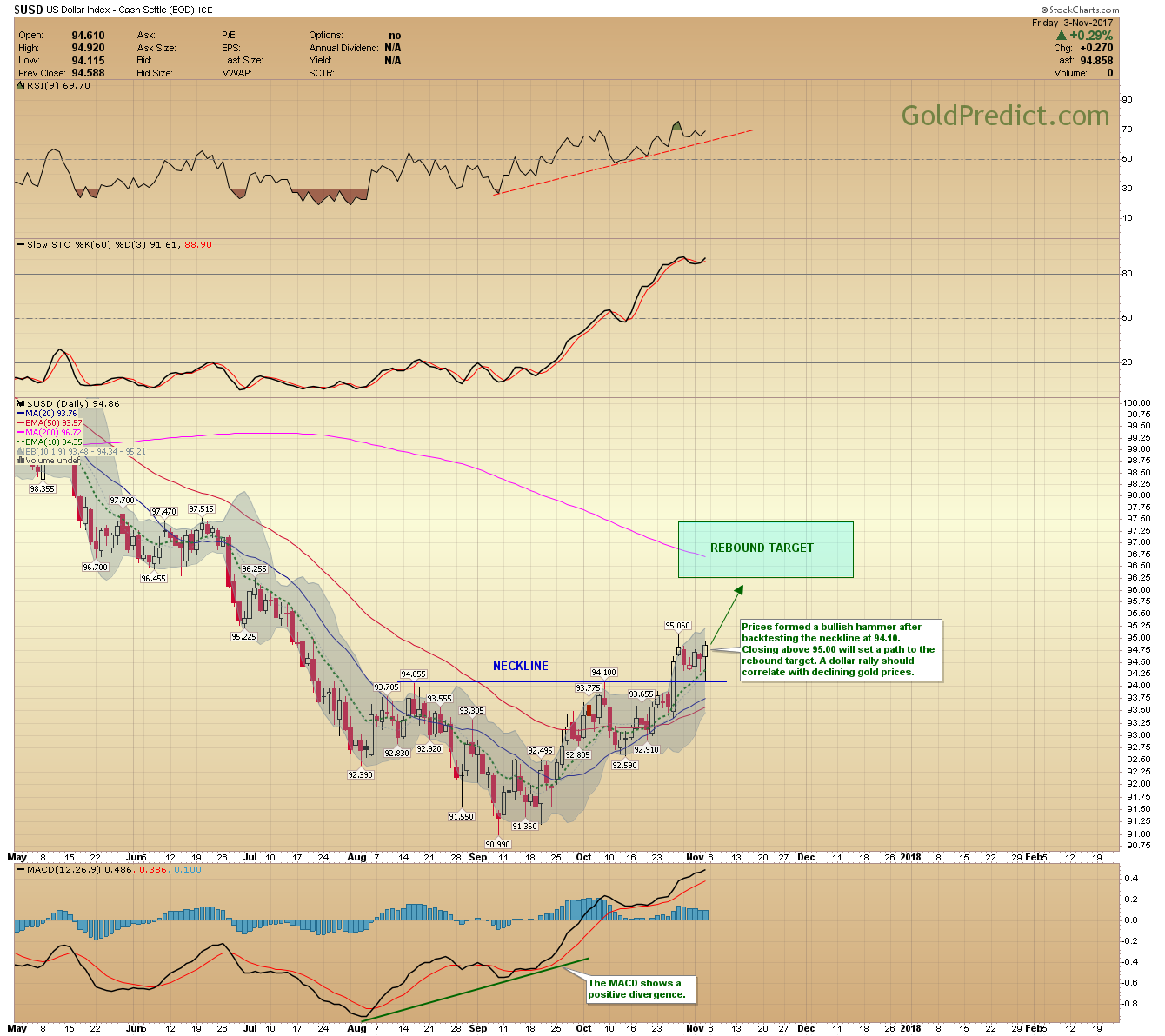 -GOLD WEEKLY- The basing pattern continues. Breaking the October low could send prices back to around $1,200, there is meaningful support at $1,180. Prices should break free from this extended basing period in 2018. Remember, the longer the base, the more significant the breakout. 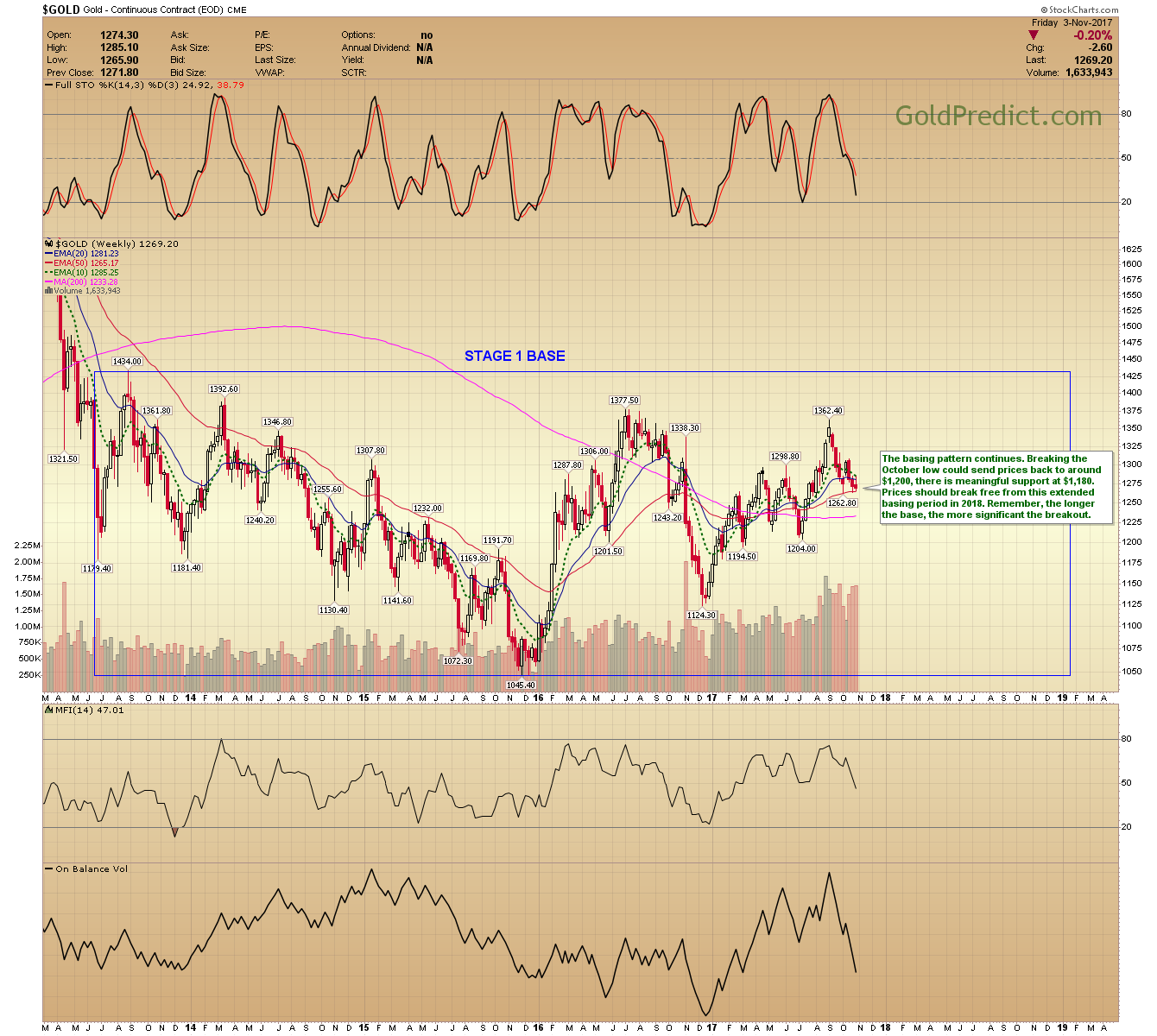 -GOLD DAILY- Prices started to break down from the bear flag on Friday. We could see the October low violated next week. A sustained decline below $1,262 will setup a test of $1,200 and conceivably $1,180. 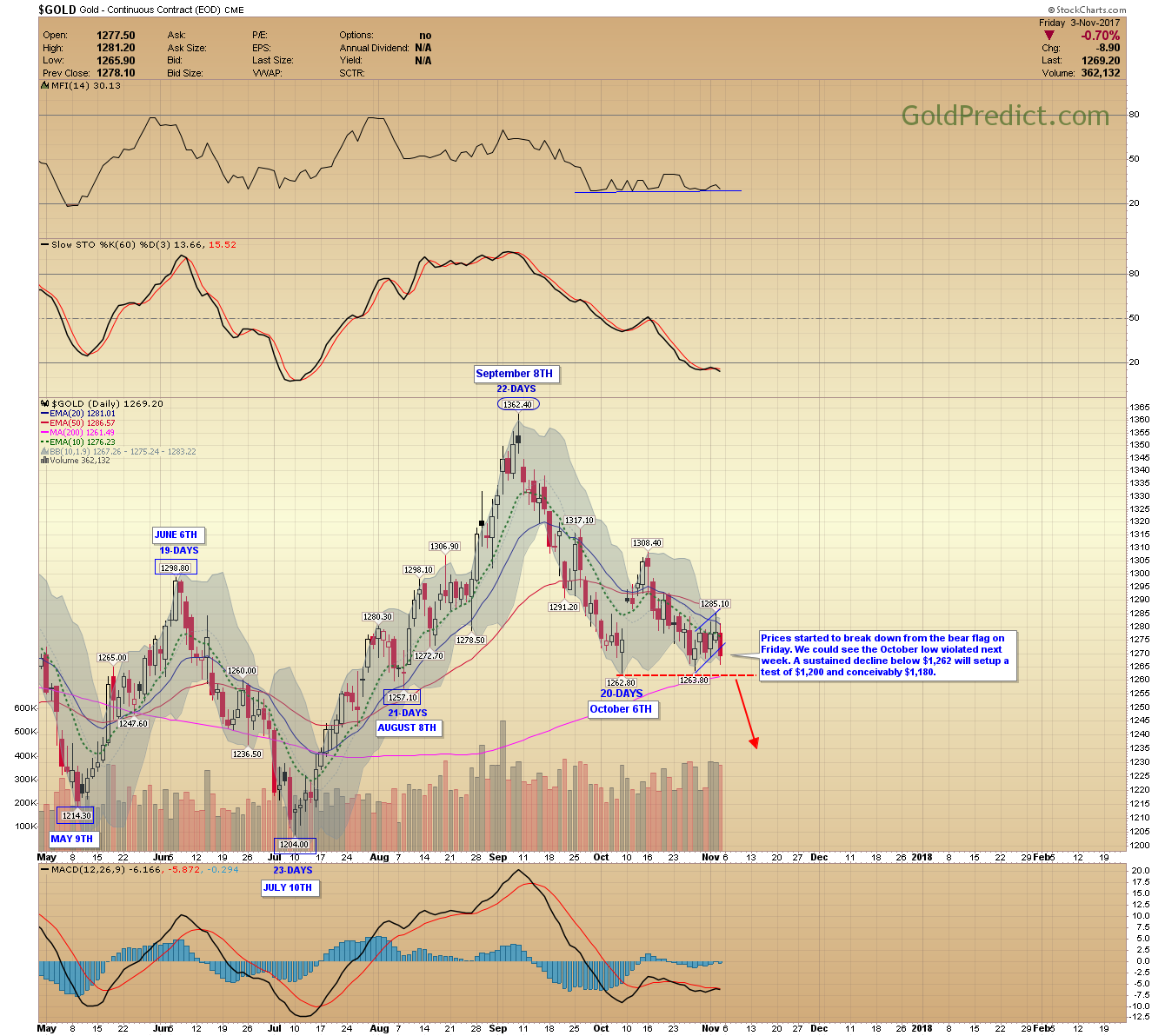 -SILVER DAILY- Prices formed a bearish evening star pattern. Breaking below $16.60 would setup a decline below $16.34. 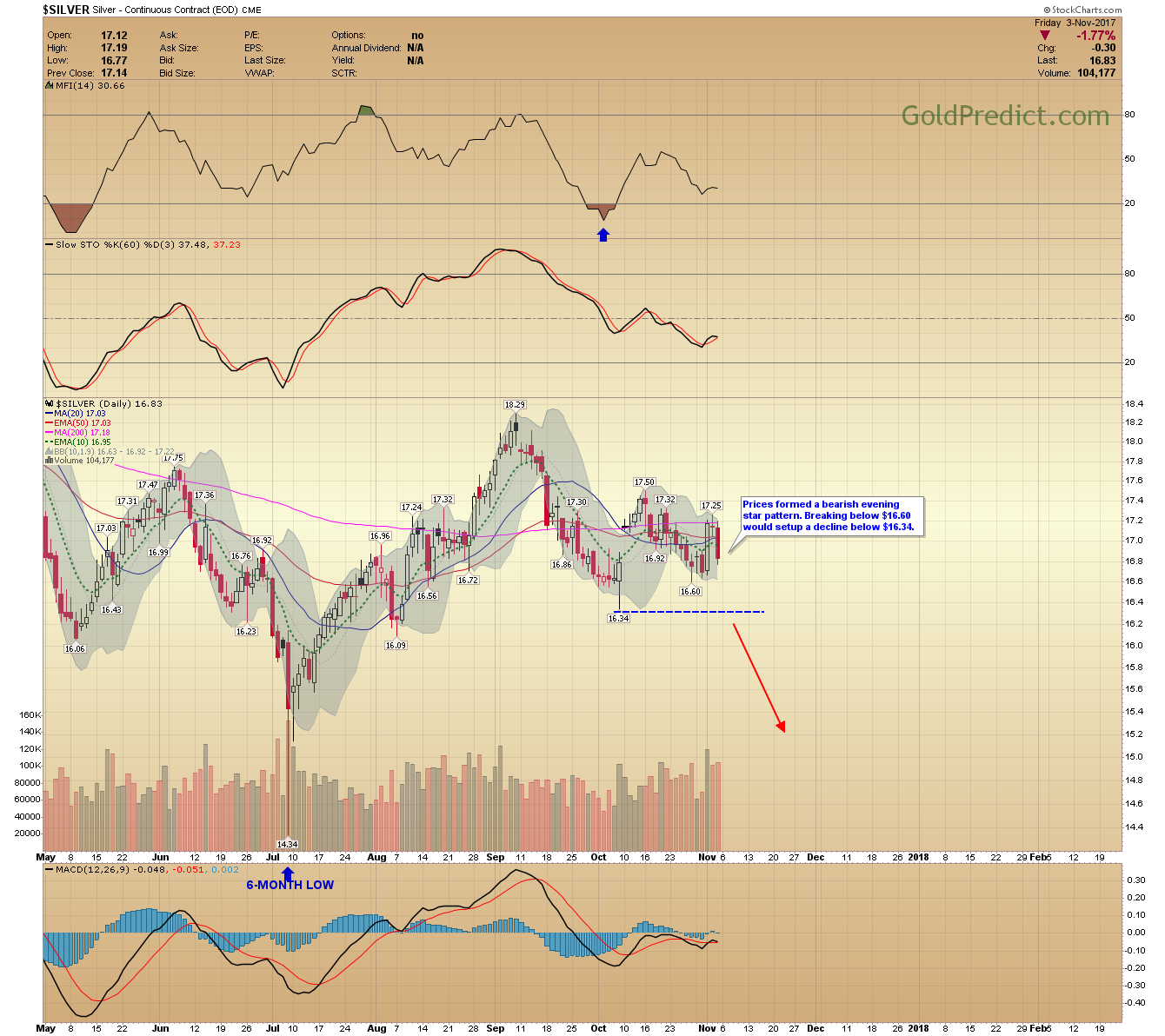 -GDX- Prices broke the pennant pattern on Friday. It’s hard for me to get overly bearish when the MFI is already below 30. Nevertheless, a breakdown in gold could send prices back to support around $21.00. 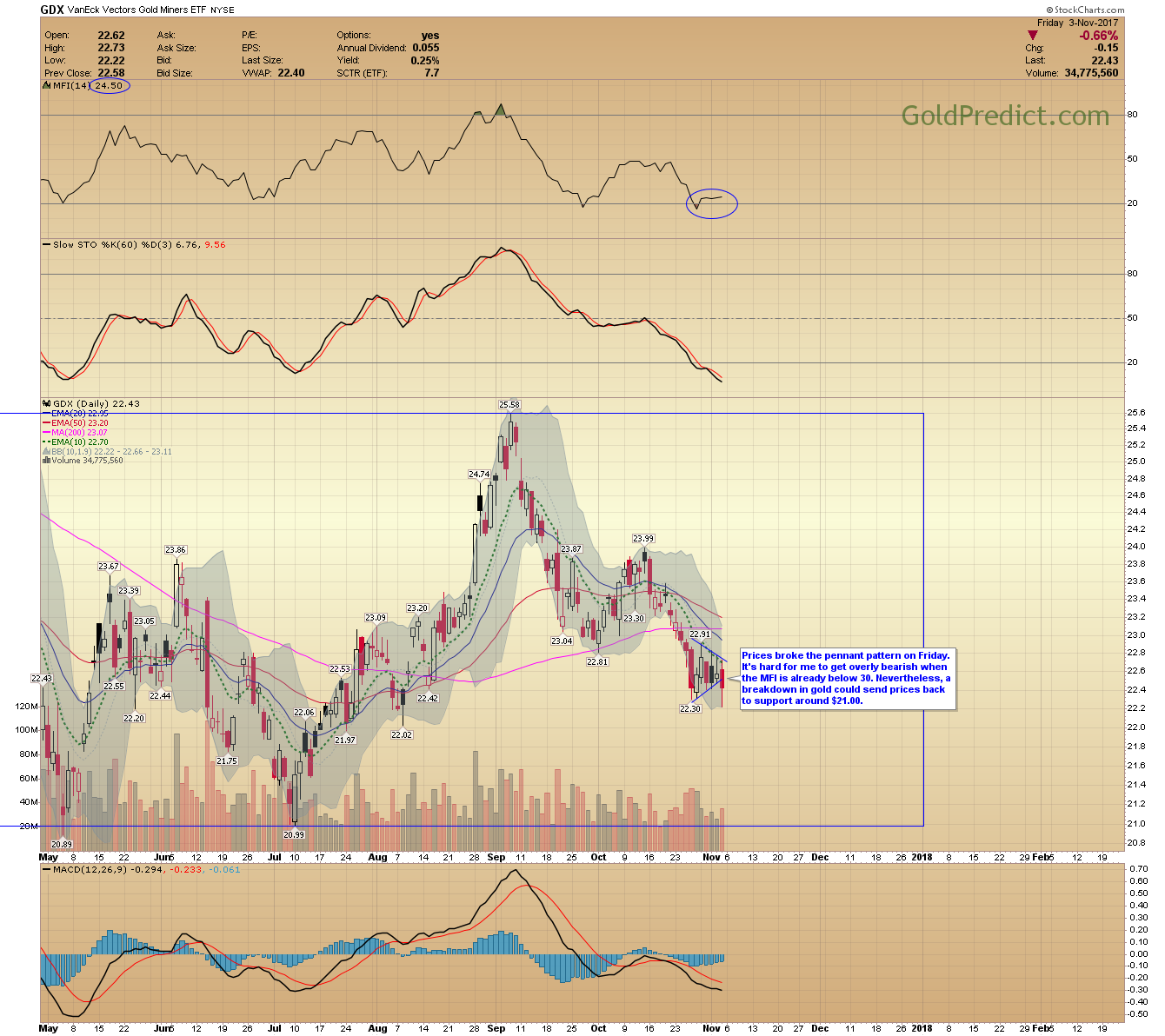 -GDXJ- The bear flag looks to be breaking down. A retest of $30.00 seems reasonable if gold decisively breaks down below $1,262. 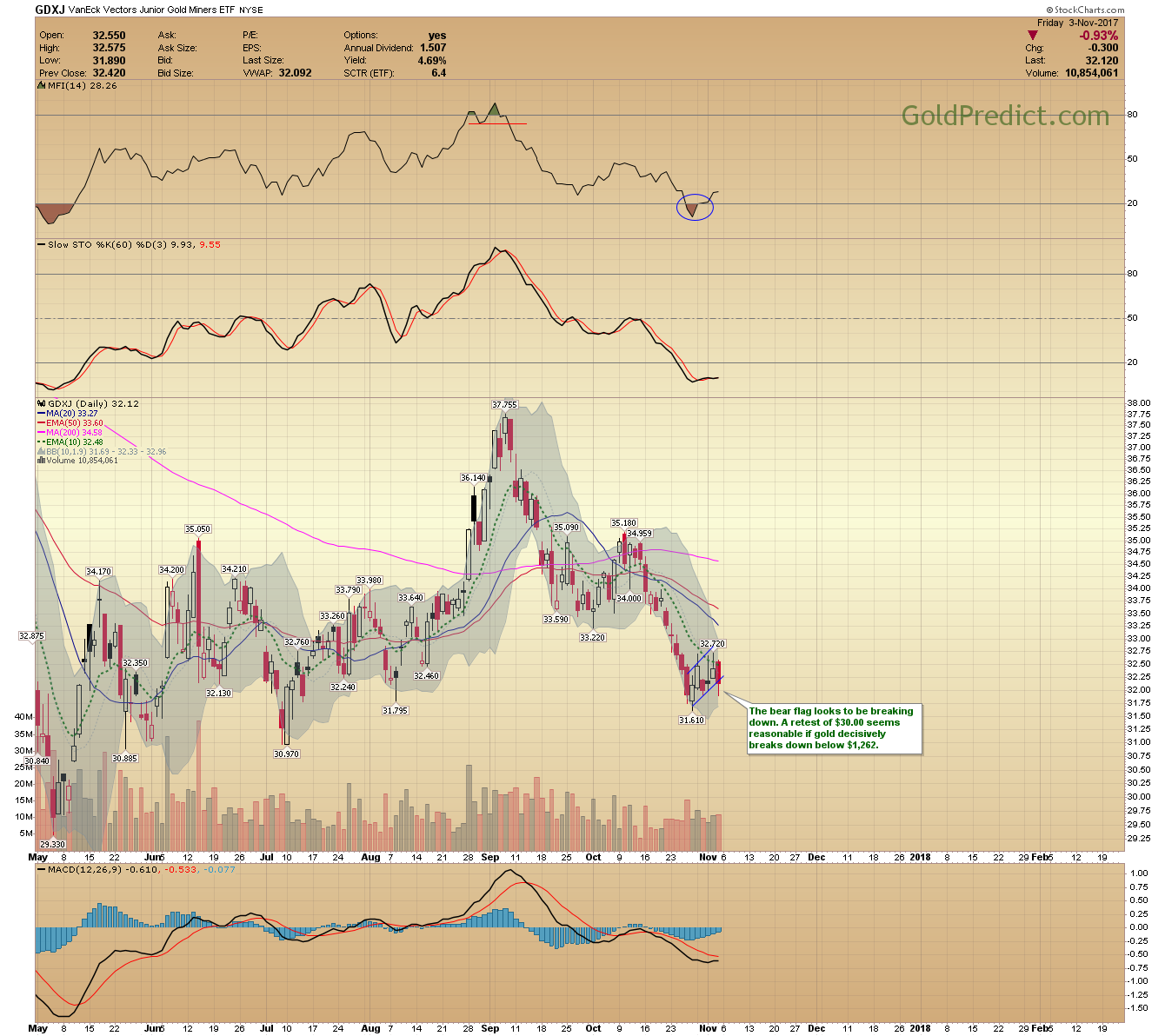 -SPY- Prices exceeded my 256 target, and there are no signs of topping. We are witnessing a runaway type move; stock valuations defy logic. Attempting to short the market is dangerous. 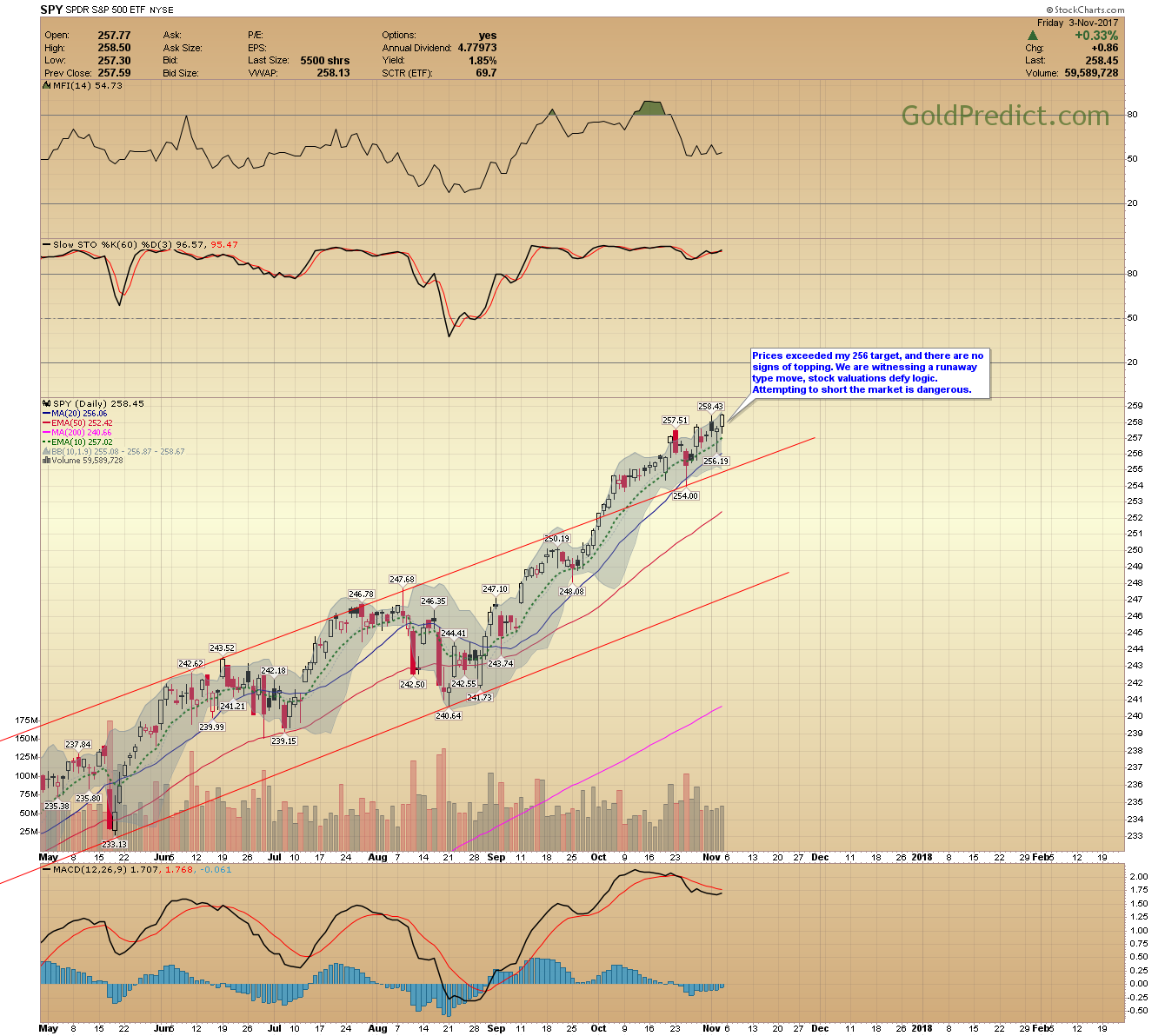 -WTIC- Prices closed above resistance. To register a breakout, oil needs to hold above $55.24 for at least three days. Failure to do so will allow a correction. 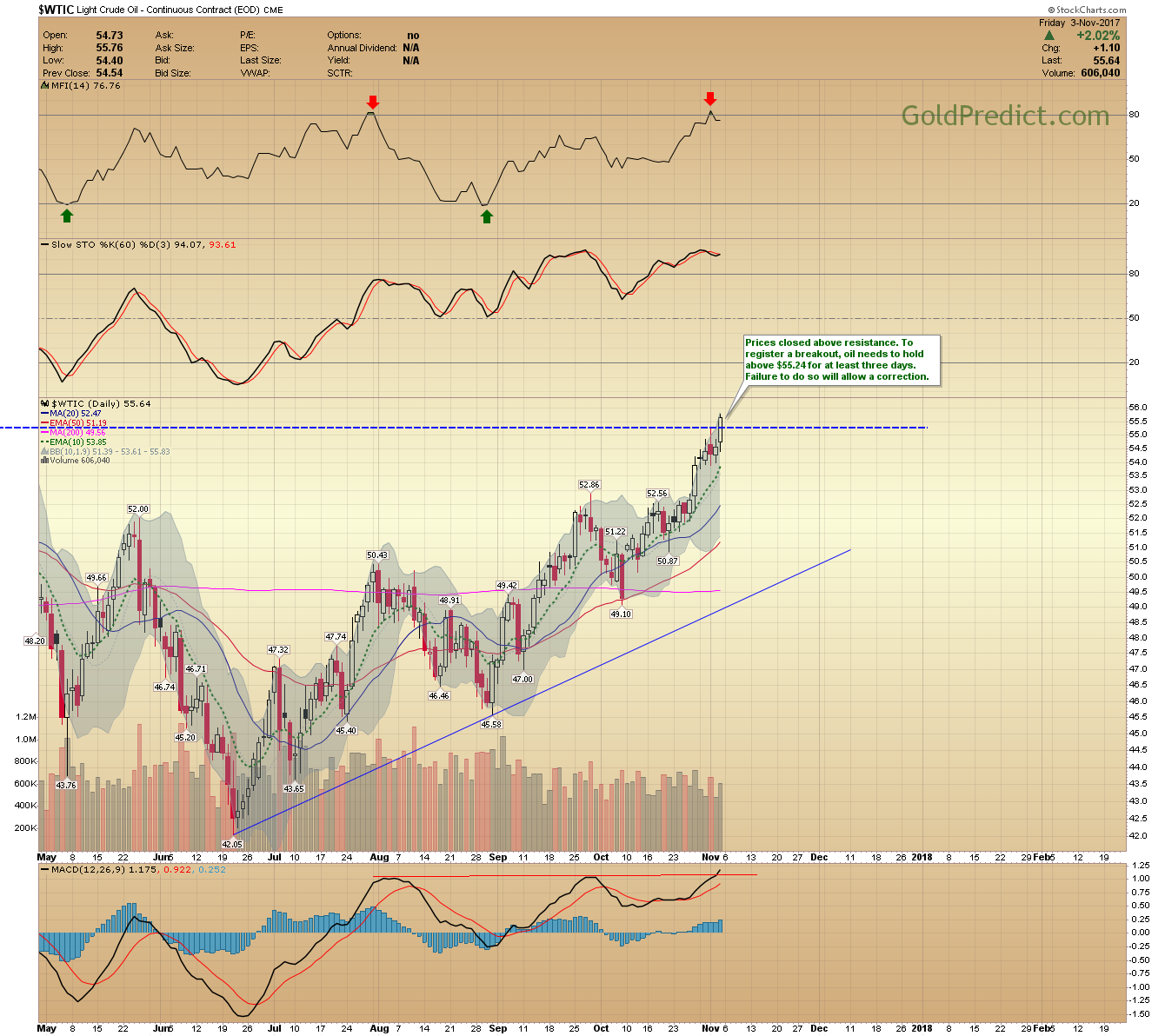 -ERX- Prices will either breakout or breakdown next week. If prices break higher, I’ll consider selling the balance of my position around $33.00. 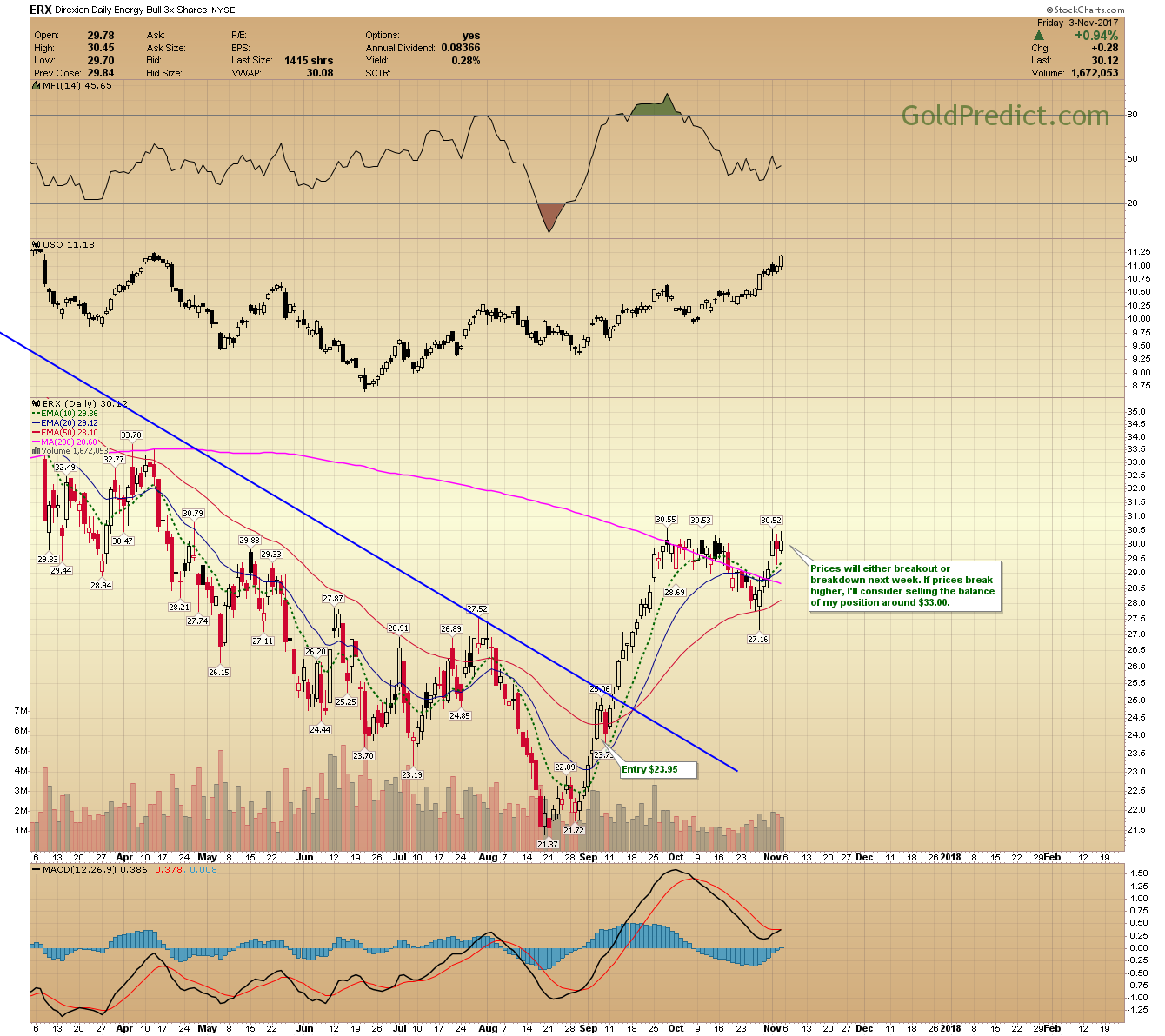 The basing phase in gold has lasted longer than I expected. Basing patterns are frustrating, those that persevere are rewarded. It looks like prices will weaken into the December rate hike. If so, it may be the last opportunity to buy at the lower half of the range.

This article was published Posted on November 4, 2017 in Categories Weekend Newsletters