Will the 6-Month cycle ever bottom? It seems like the assault will never end, investors (including myself) are beyond their breaking point. I’ve seen this many times, and I can assure you prices will bottom.

It’s been 30-weeks, and gold is yet to confirm a low. However, miners remain stable and are just 6% below their April highs. Their resilience while gold declined nearly 10% cannot be ignored. It points to an underlying strength that should deliver brilliant gains when gold finally bottoms.

There were subtle signs of bottoming on the weekly chart. Both gold and silver produced weekly outside reversals. This doesn’t guarantee a low, but more times than not, it indicates a trend change. Moreover, both metals made marginal new lows but managed to close above their early July pivots.

The building blocks are in place, and daily close in gold above $1248.50 would sponsor a bottom. Silver would have to close above $16.02.

As usual, I’ll post multiple updates next week as the price action unfolds.

-US DOLLAR- The dollar tested the 95.00 level for the third time and produced a bearish shooting star. The topping pattern has begun to take on the shape of a head and shoulder top. A close below 93.75 would support a breakdown.

-GOLD WEEKLY- Prices formed a weekly outside reversal. An outside reversal occurs when prices exceed both the high and the low of the previous week. More times than not it signals a trend change. 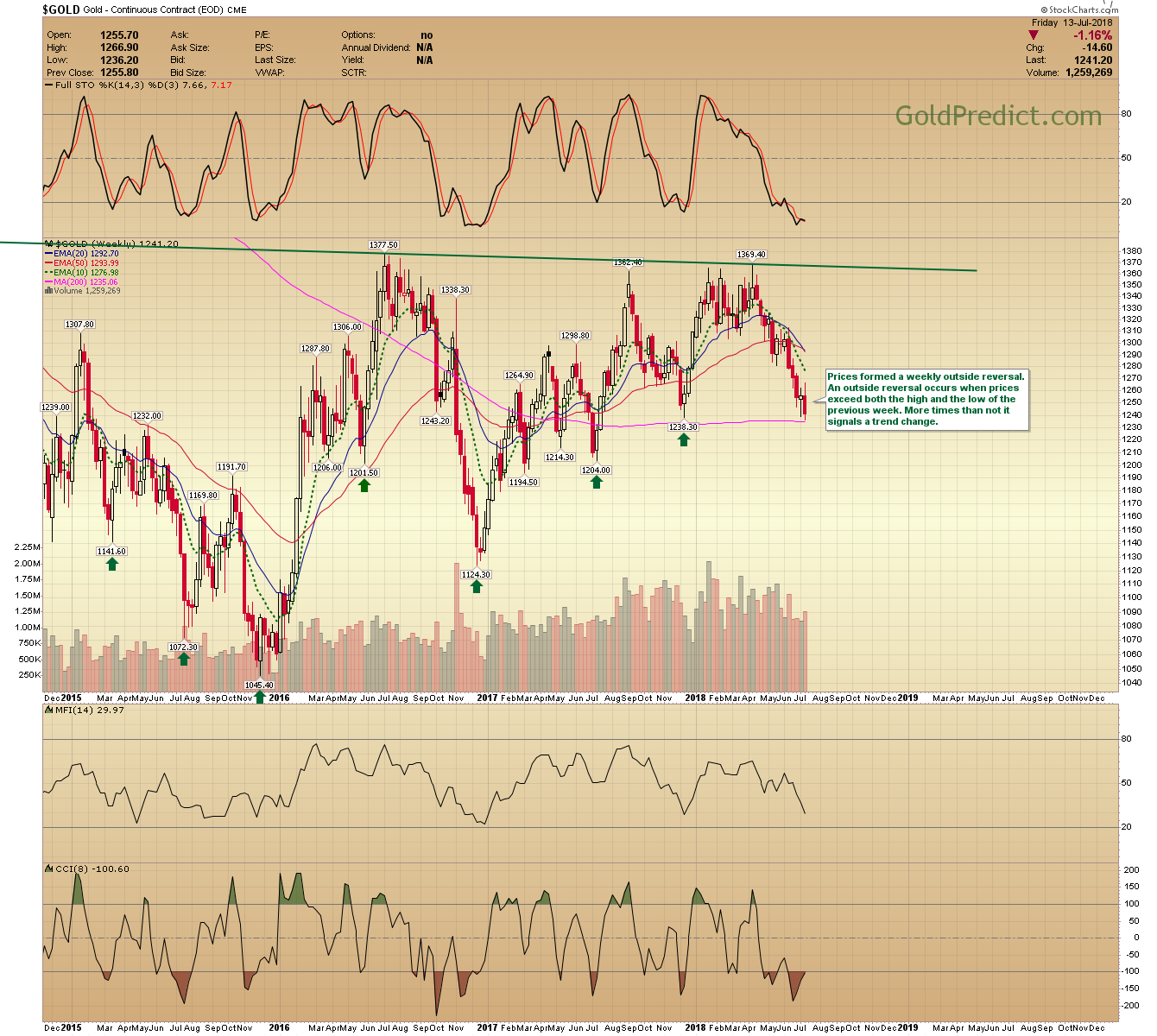 -GOLD DAILY- On Friday prices made a new low ($1,236.20) but managed to close just above the July 3rd low. Technically, this meets the requirements for a marginal new low. Also, prices formed a bearish engulfing candle. Bearish engulfing patterns are usually seen at tops. However, they occasionally appear at bottoms as a trend weakens. Bulkowski calls it the last engulfing bottom. Closing above $1,248.50 early next week would inspire a low. 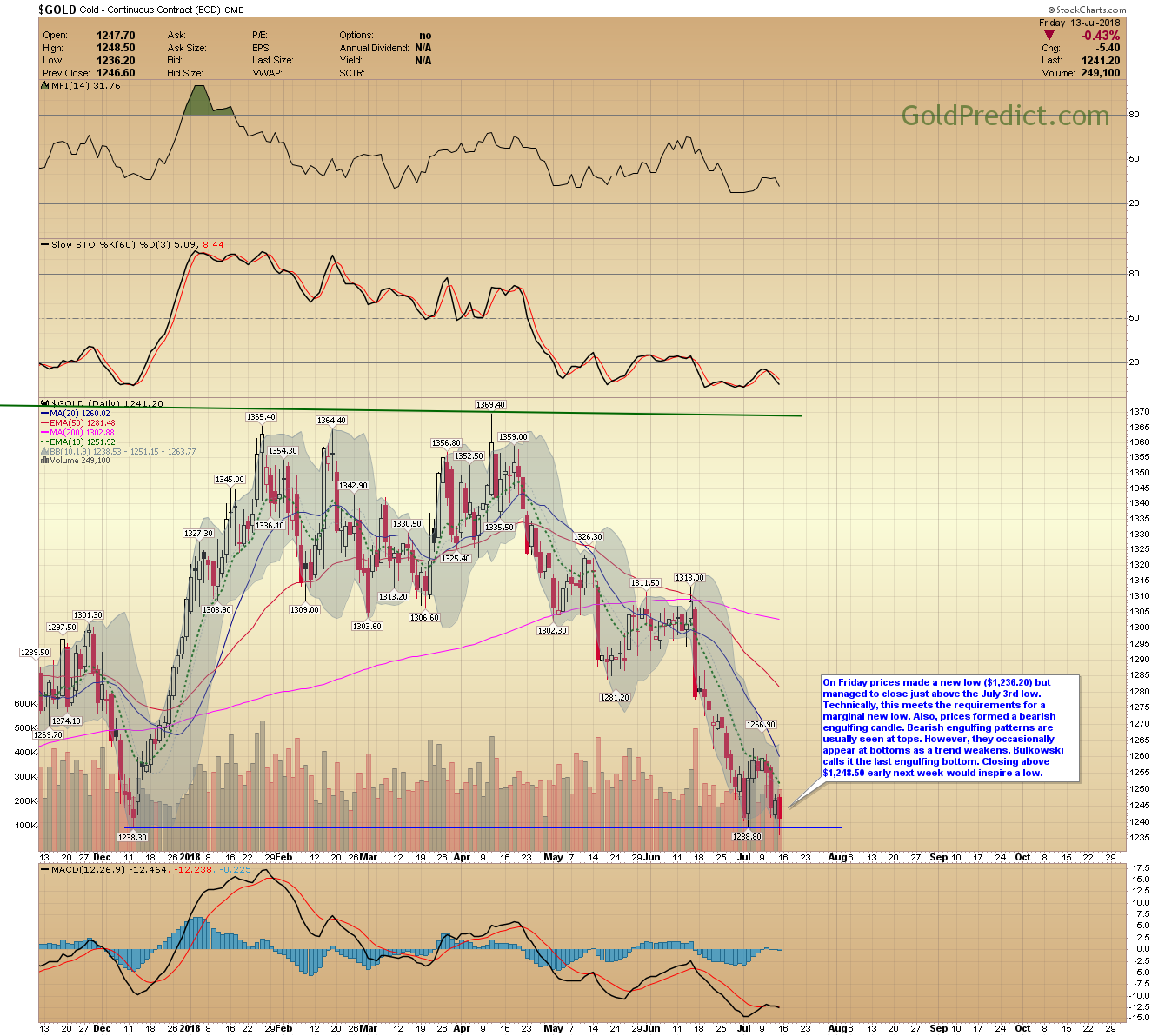 -SILVER WEEKLY- Prices closed lower for the 5th straight week and formed an outside reversal candle. There is excellent support between $15.65 – $15.80. All the pieces are in place for a low…we just need a little help from price. 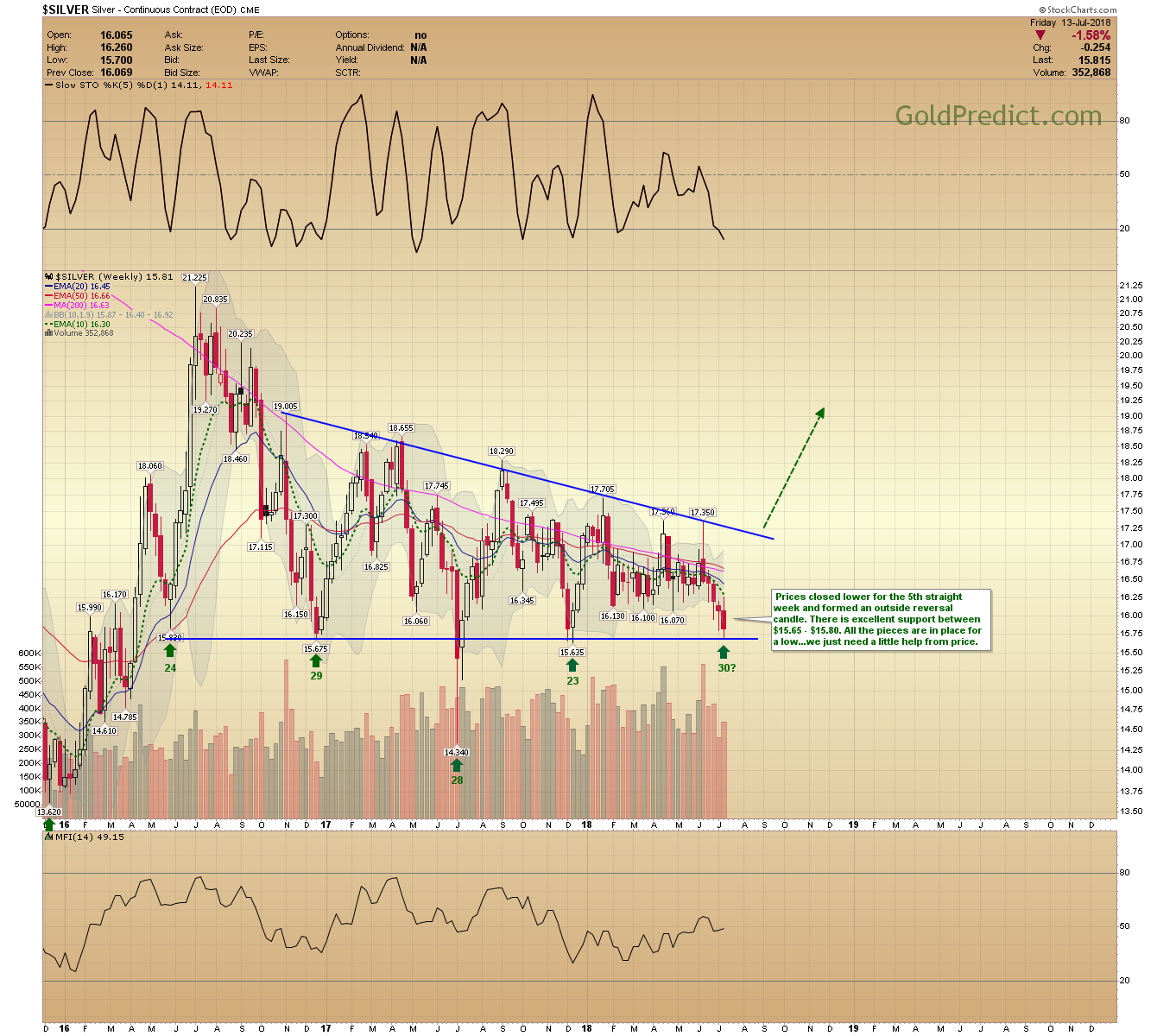 -SILVER DAILY- Like gold, prices formed a bearish engulfing candle (possible last engulfing bottom), and made a new marginal low. A daily close above $16.02 next week would promote a bottom. 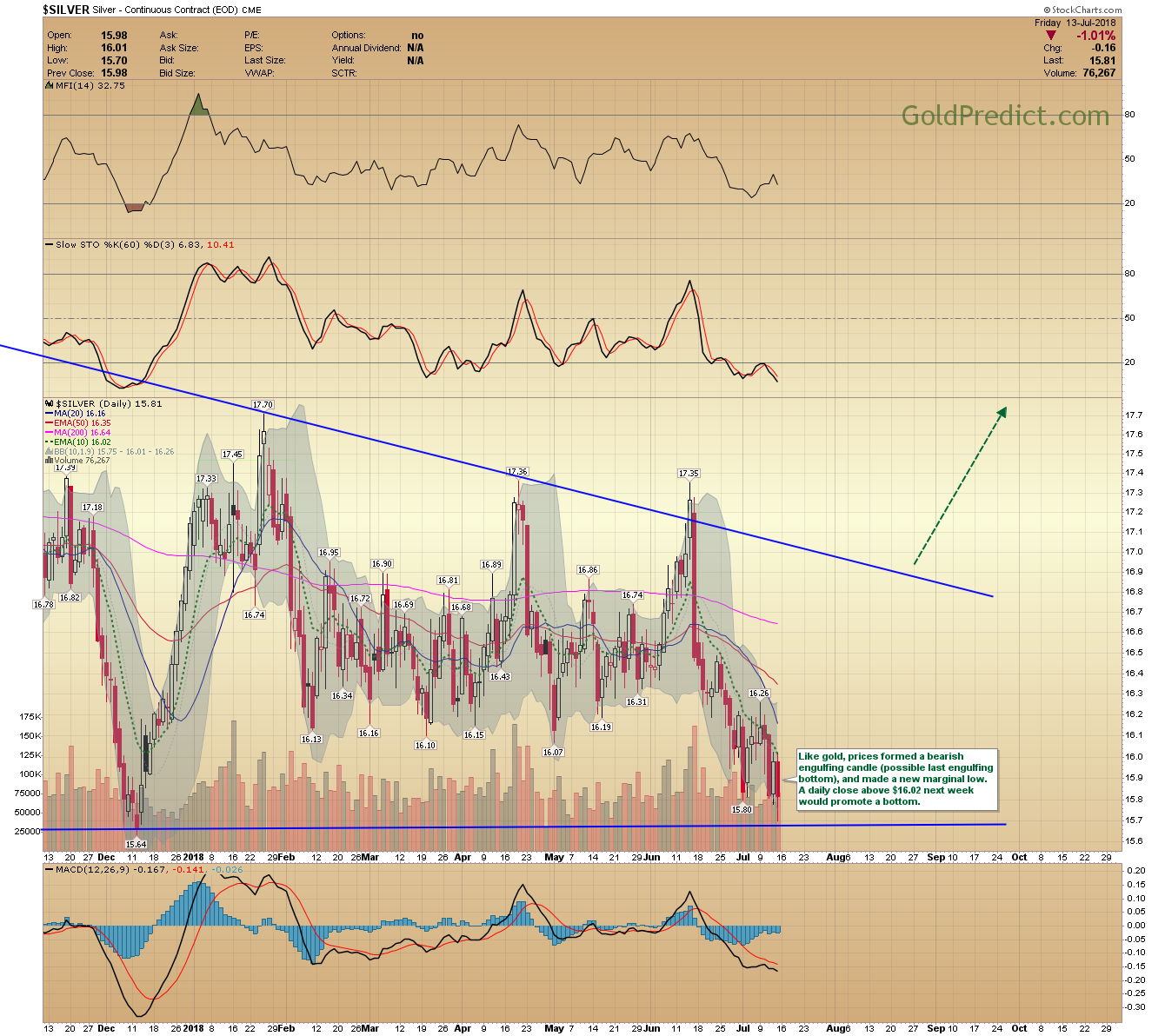 -HUI/GOLD RATIO- The HUI/GOLD ratio finished the week at .1398, just above .1397 support. The bullish potential endures if the ratio maintains the .1390 – .1397 area. If achieved, I’ll consider this a successful backtest and anticipate a decisive breakout above the blue trendline. 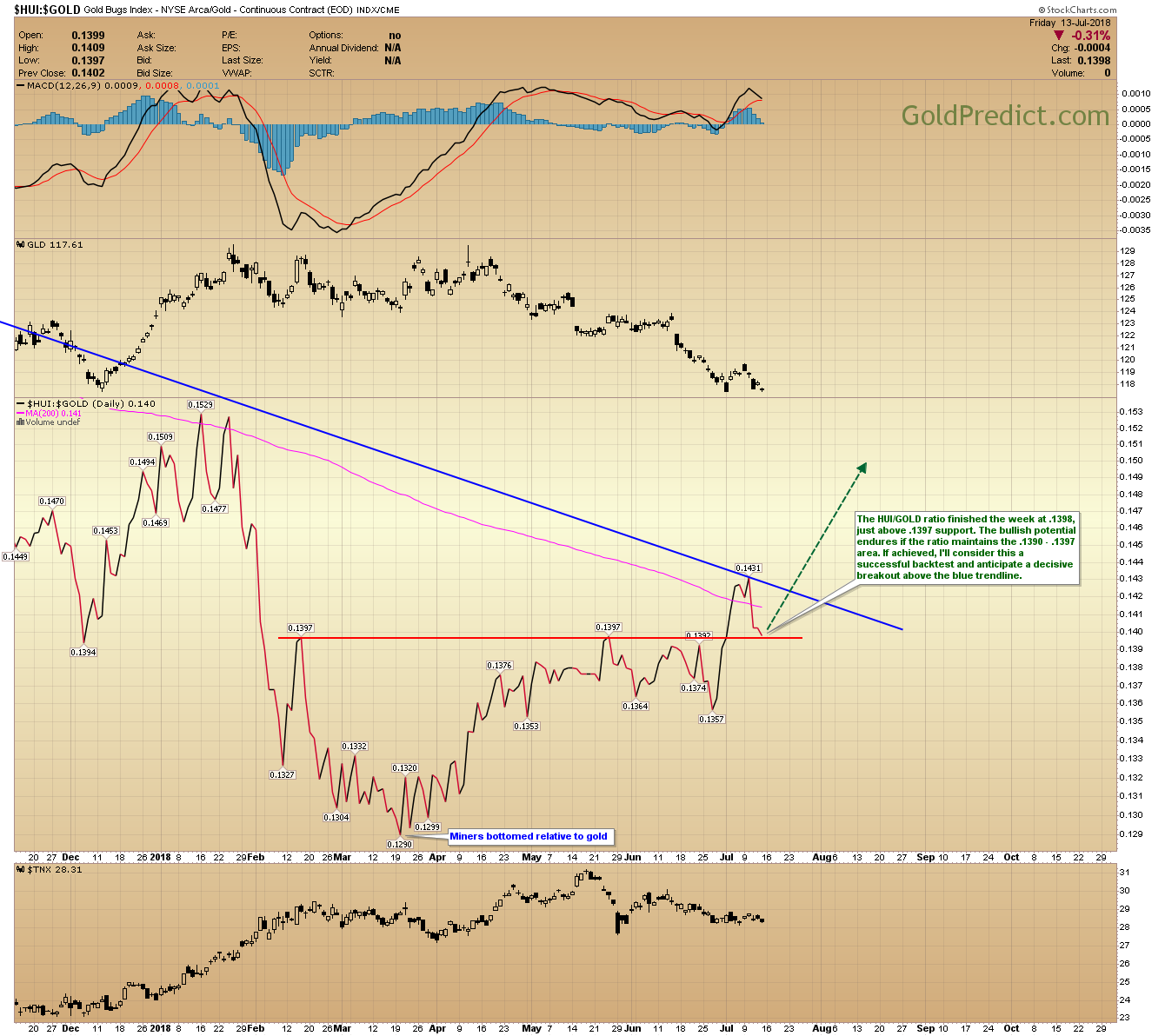 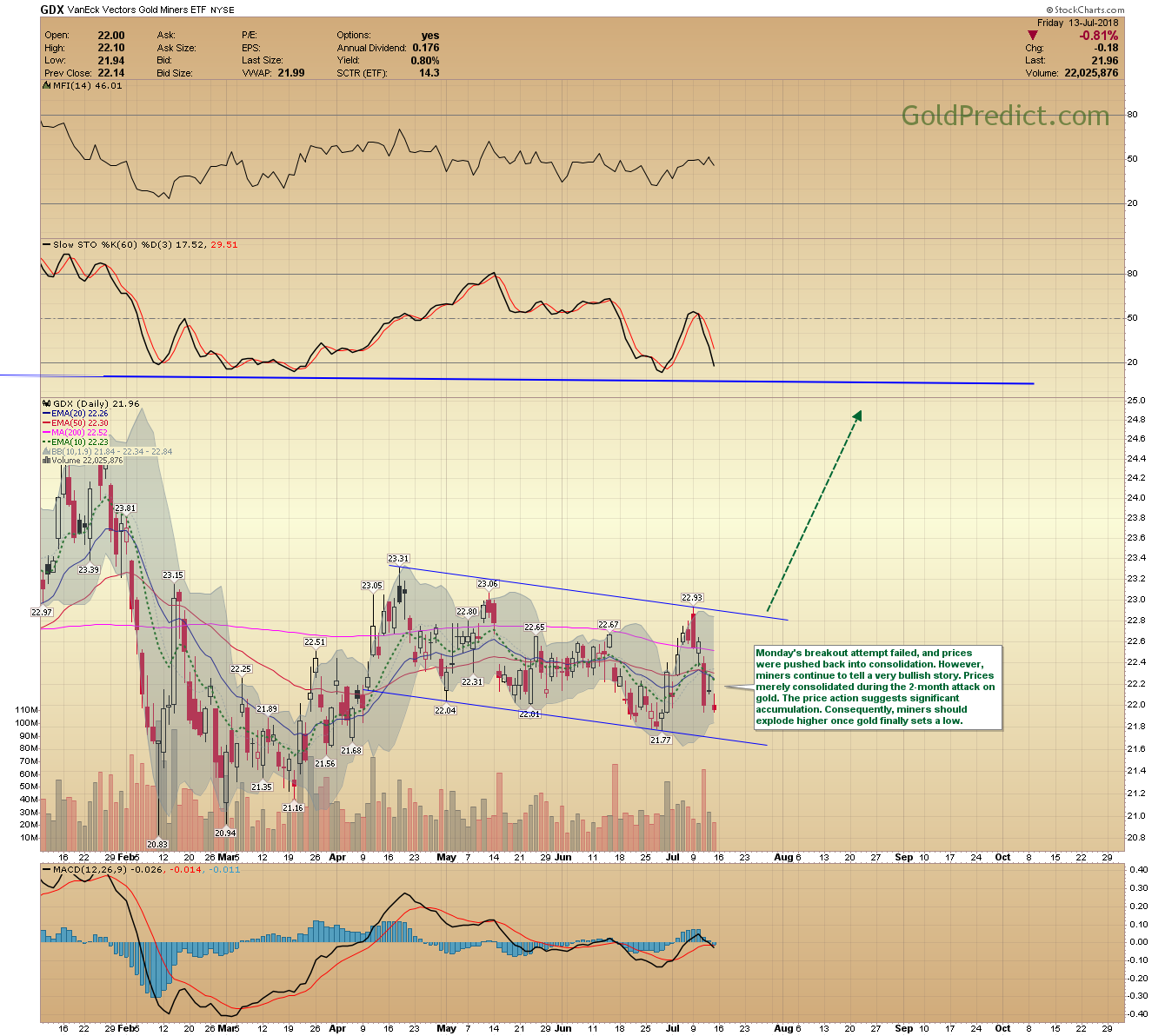 -GDXJ- Though the last 2-months have been painful, juniors are just 6% below their April high. I’ve seen GDXJ rally 6% in one or two days…so prices could surge once gold sets its low. 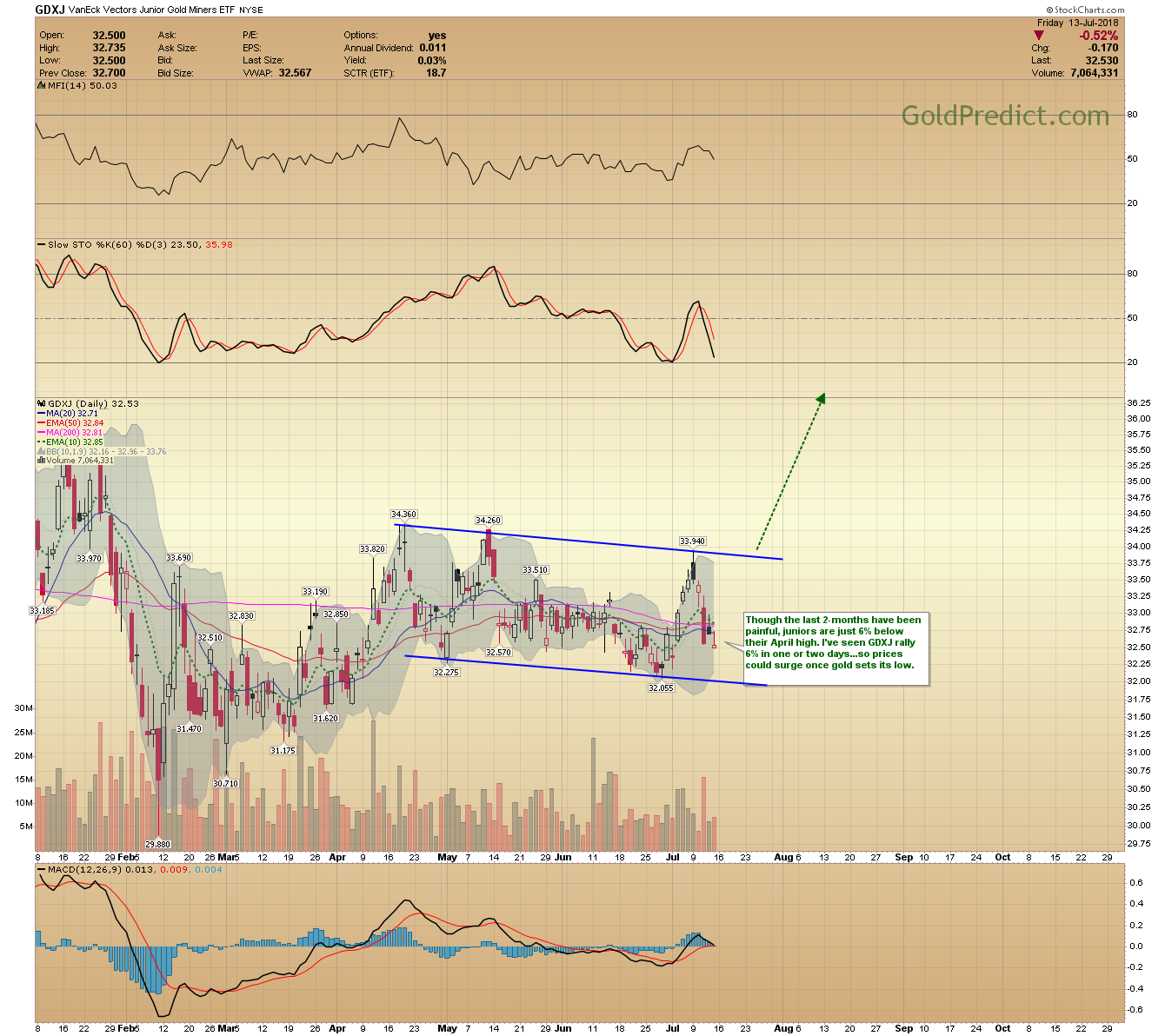 -JNUG- It looks like we will have to wait a little longer for a breakout. Prices could get back above $15.00 quickly once gold finally bottoms. 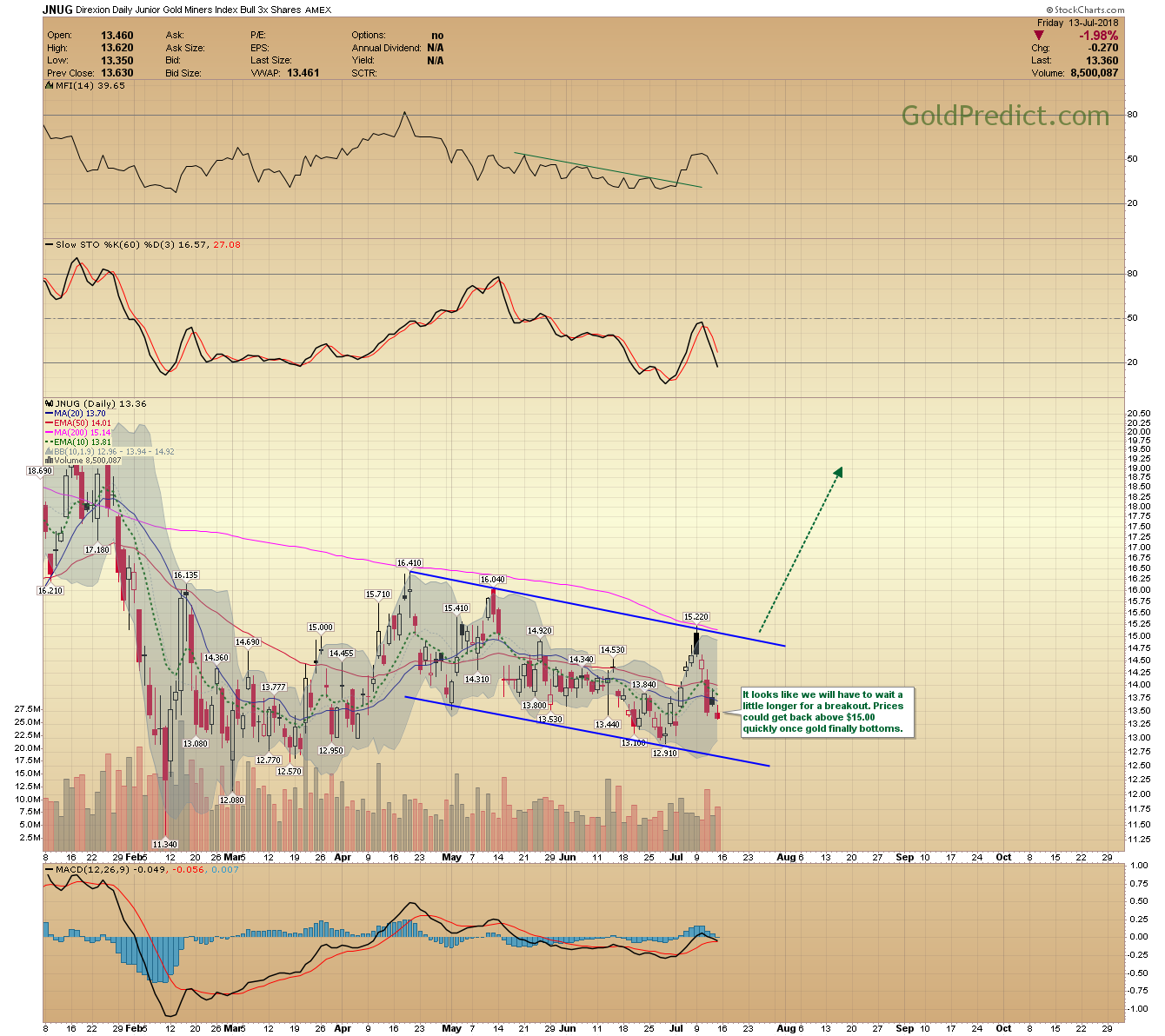 -USLV- Prices are still thrashing around the lower support boundary. Closing above $8.84 next week would sponsor a bottom. 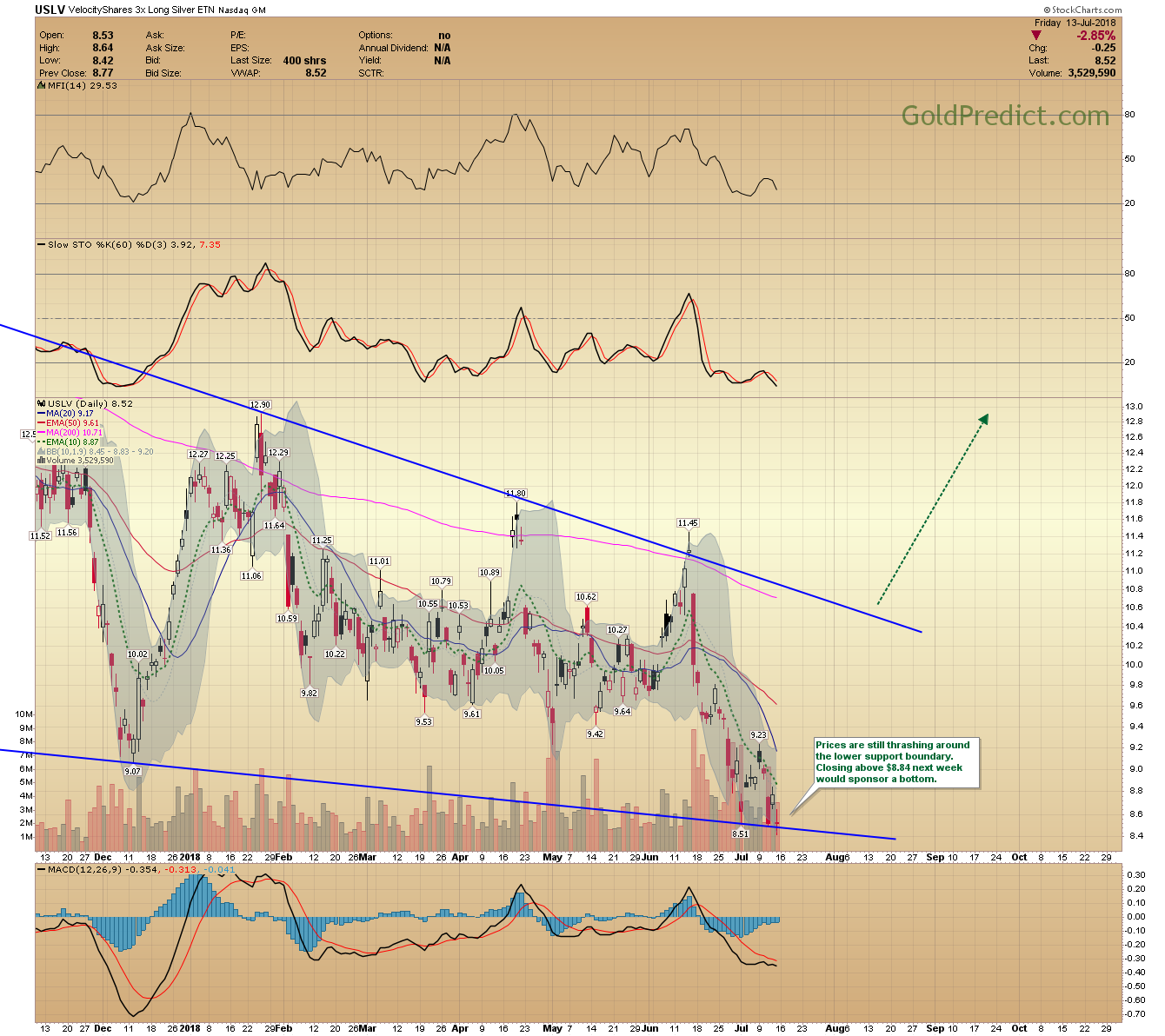 -SPY- Prices are above the 278 level, but there is little else supporting a breakout. Volume is light, and the McClellan oscillator turned lower. Since the February low, rallies have lasted about 11-13 trading days before correcting. Monday marks the 11th trading day of this rally. Consequently, a short-term top is likely between now and Wednesday. Prices should return to the gap at 276 at a minimum. 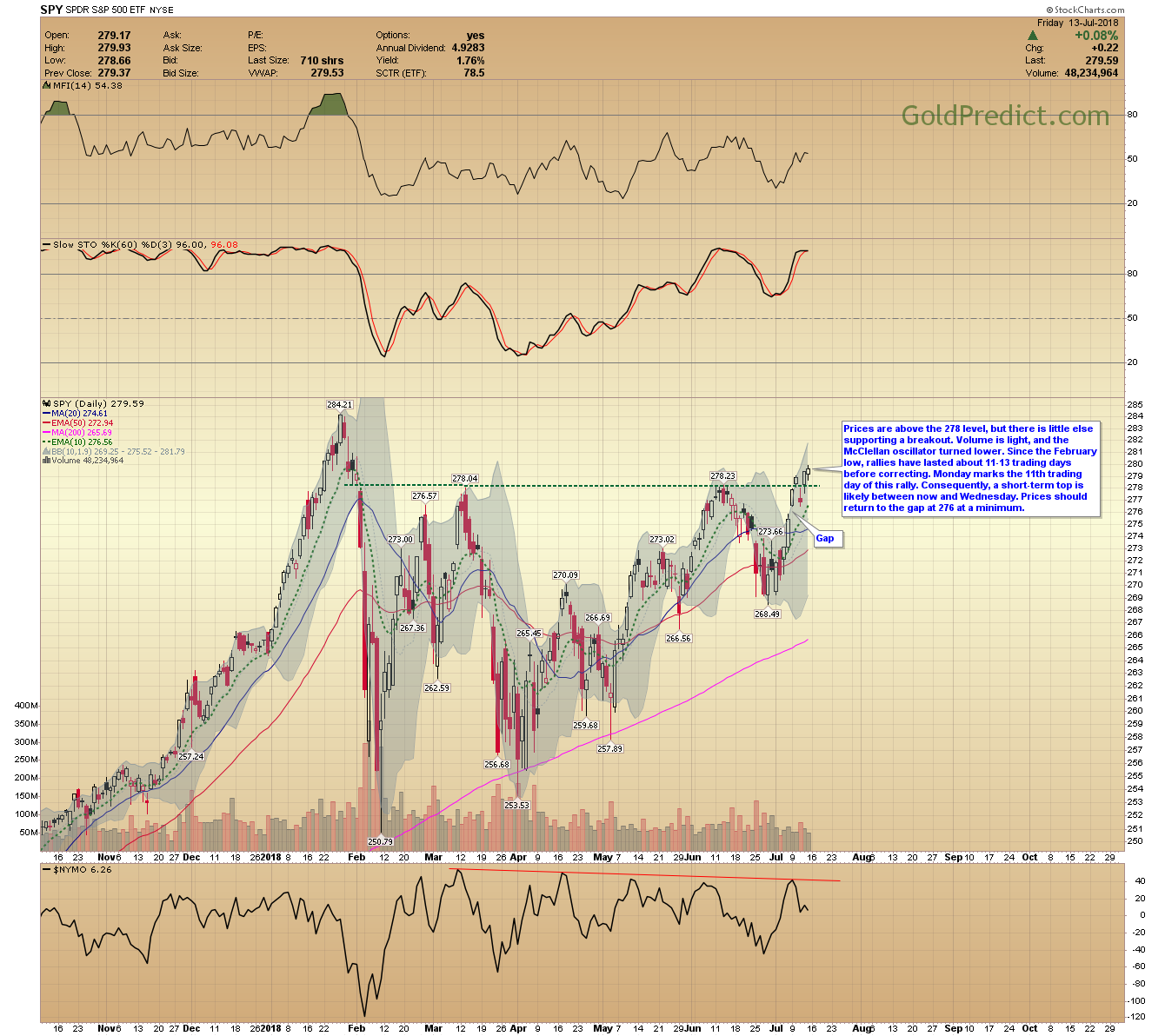 -WTIC- The 40-day cycle suggests a turning point sometime late next week. At this point, it is unclear if it will time a high or a low. I’ll monitor the trend and look for a potential trade setup. 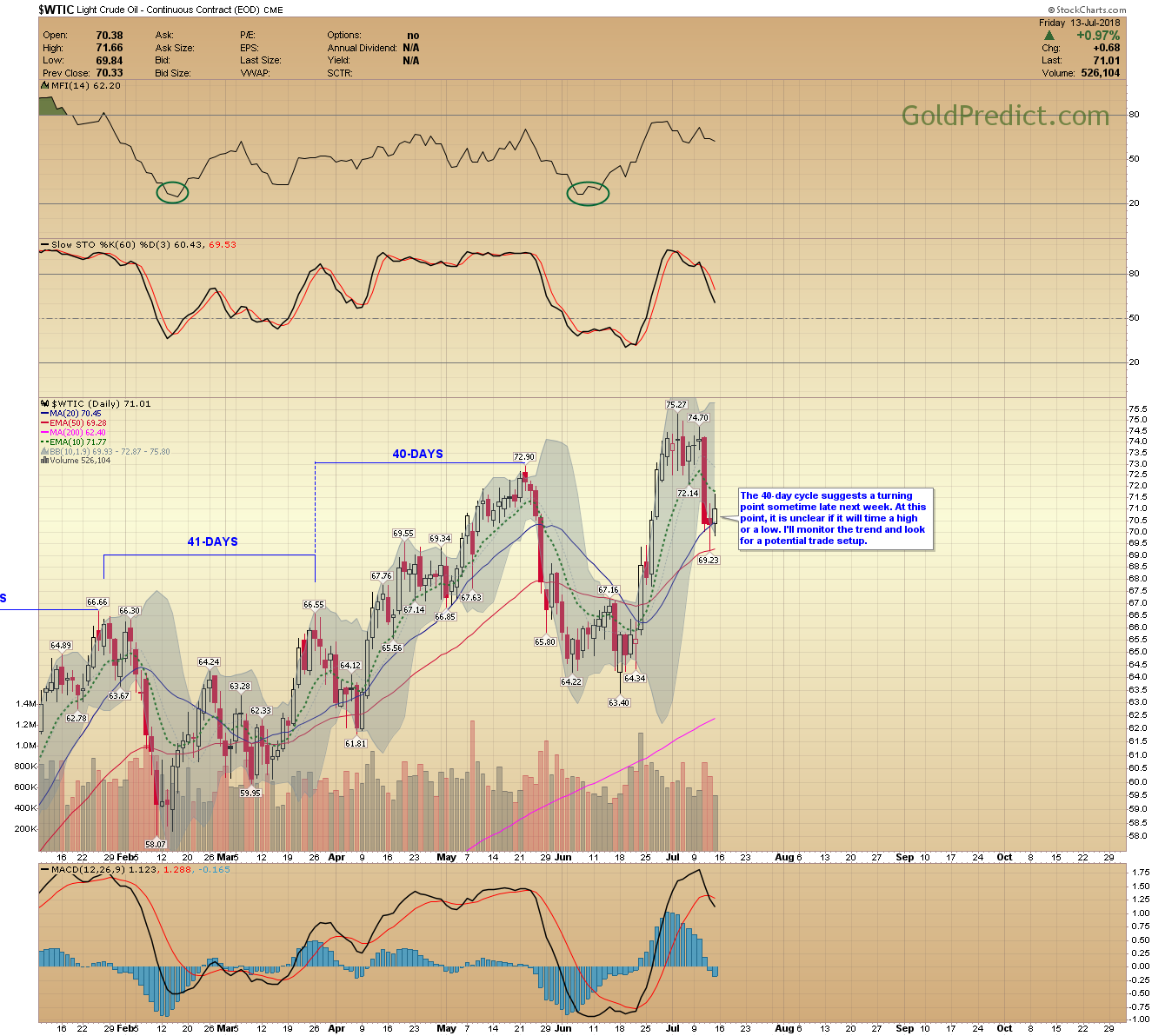 We’ve weathered a significant storm over the last 2-months. The pain and suffering should become a distant memory if miners and silver perform as expected. The stage is set, and I believe prices will end the year much higher.

This article was published Posted on July 15, 2018 in Categories Weekend Newsletters