Platinum prices are telling a story. Prices peaked 10-years ago at $2,286, and they are currently trading around $830, well below the price of gold. In fact, the Gold/Platinum ratio reached a record high. However, the most bullish aspect, in my opinion, is the COT report. Commercial traders were net short over 60,000 in August 2016. They have unwound their short positions and are now net long. The last time they were net long was in 2004. Furthermore, large speculators are net short a record-breaking 6,876 contracts. Together, it paints a bullish picture for this very unloved precious metal.

-PLATINUM LONG-TERM- Platinum has been the worst performing precious metal for some time. Prices are at long-term support, and the COT picture has improved dramatically. Now, this doesn’t guarantee an immediate bottom, but I believe the bear market is about over. 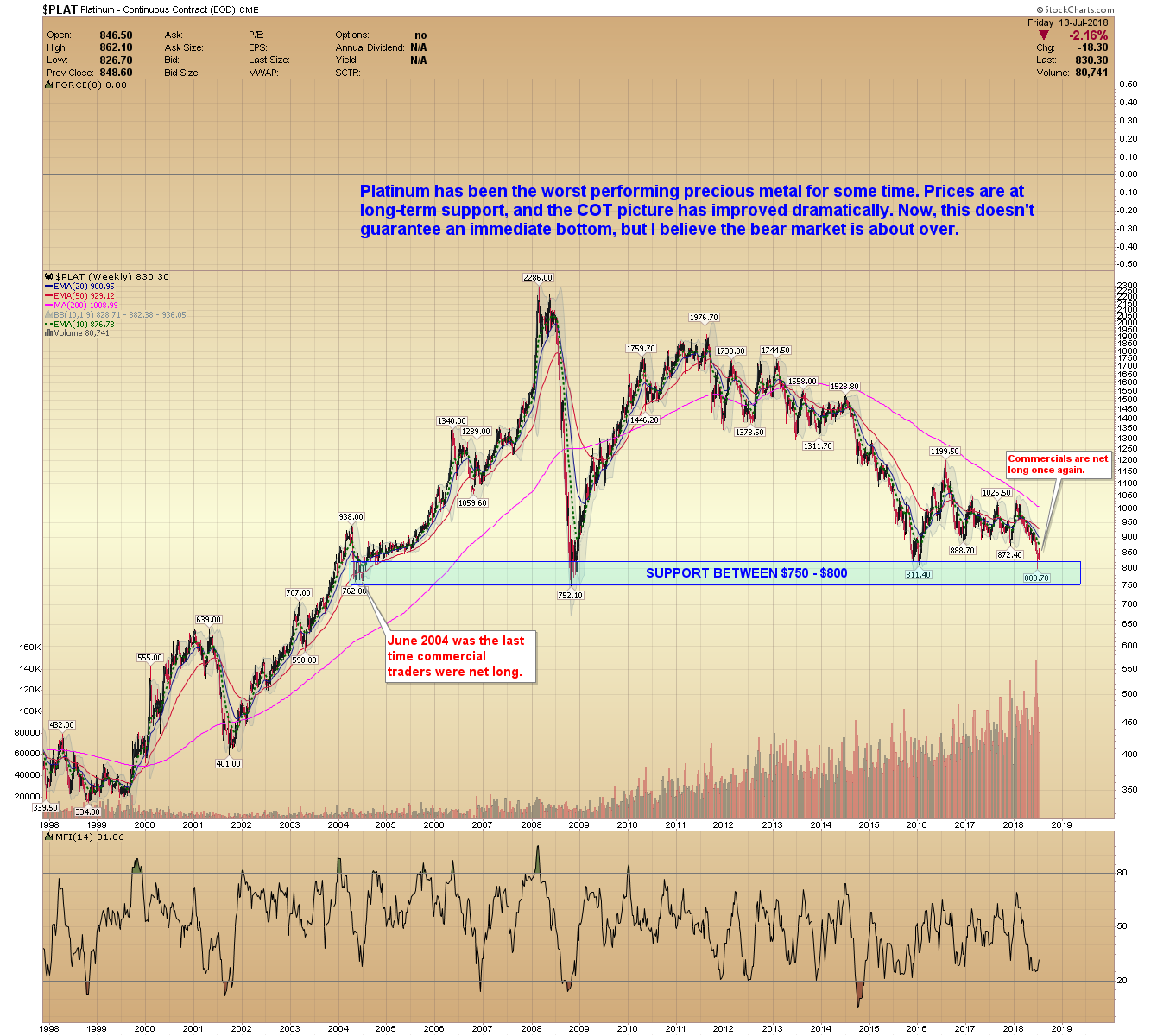 -PLATINUM/GOLD RATIO- The Gold/Platinum exceeded 1.50. Meaning, gold is 50% more expensive the Platinum. There are a couple of ways to take advantage of the current situation. If you’re a long-term accumulator of metals, perhaps you’d want to consider buying a little platinum instead of gold. The premiums for platinum coins are a bit higher, and they are less available, but it could be a sound long-term play if the ratio returns to normal.

Another way is to trade or exchange some of your physical gold for platinum. Of course, you need to be aware of any tax implications, but it’s something to consider if you have a 10-year+ time horizon. If the ratio descends back below .50 (Platinum is double the price of gold), you could exchange your platinum holdings back into gold. Now, this is just a theoretical strategy. Please contact a professional investment advisor before attempting either of these strategies. In full disclosure, I exchanged some of my gold holdings into platinum last week. 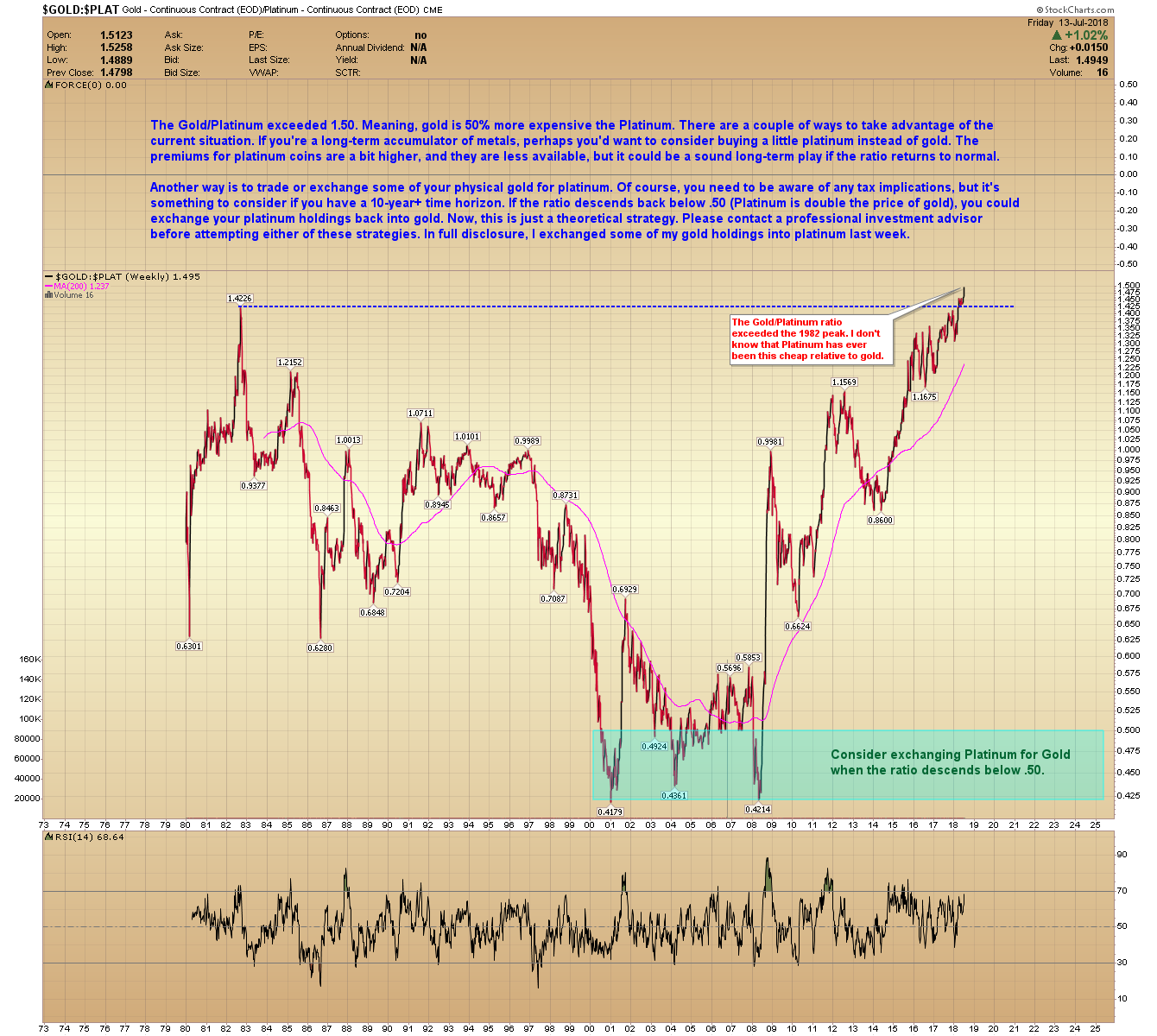 PLATINUM COT PICTURE- Here is a chart of platinum courtesy of www.barchart.com. Note how in January 2013 and August 2016 Commercial Traders (smart money) had massive short positions (50,000+ contracts) while the Large speculators (dumb money) built record longs. Commercials have reduced their shorts from 60,317 (August 8th, 2016) and have become net long (366 contracts). Their first net long position since June 2004. Large speculators have shifted from net long 55,949 (2016) to a record net short 6,867 contracts. 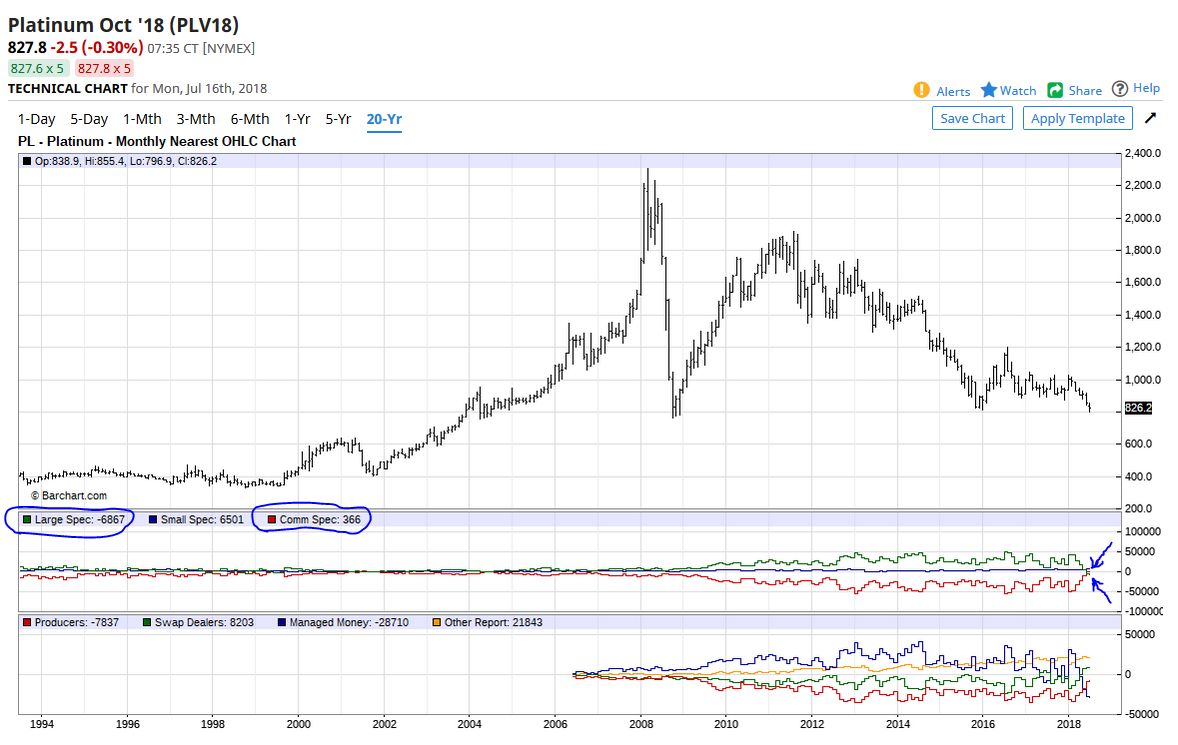 As you are well aware, anything can happen in investing. Platinum could stay out of favor if industrial demand dwindles. However, if investment interest returns…prices could rally expeditiously, and the Gold/Platinum ratio should return to normal.

This article was published Posted on July 16, 2018 in Categories Updates