For some time I’ve expected 2018 to be gold’s breakout year. Although it is still possible, the odds have declined severely.

The Trump Effect: I think I can safely say the majority of gold challenges stem from Trump. The economy was rolling over into a recession in 2016 (see below) and gold responded positively. Prices bottomed at $1045 and rallied to $1377 by July of 2016. However, everything changed when Trump got elected. The economy began to recover, and his tax policies are extending the business cycle. We would have continued into a recession and gold would be much higher if Hillary won the election, I believe. Click here for earings link. 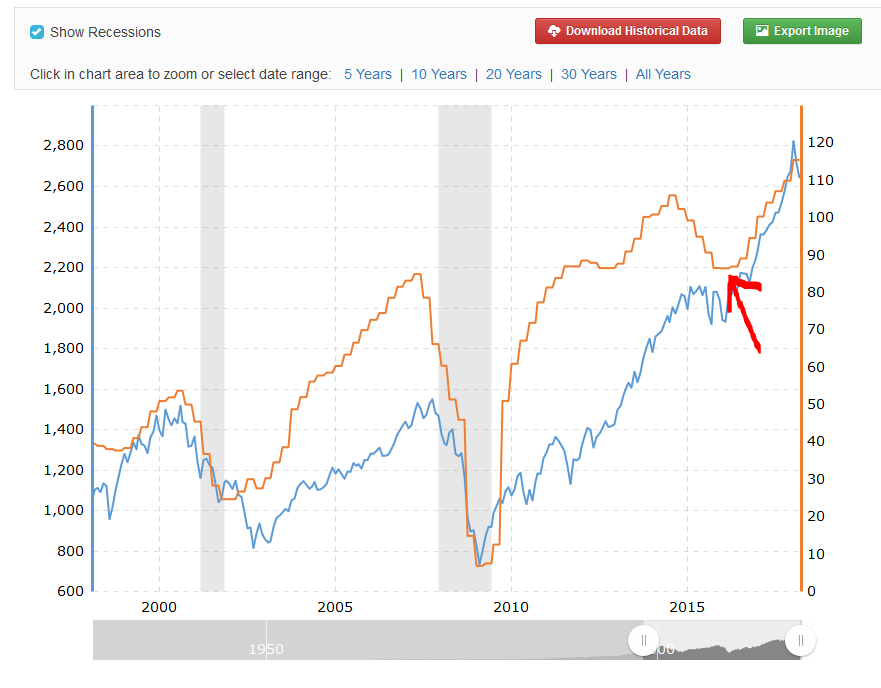 Now, this doesn’t mean gold is dead – it’s just out of favor for the moment. I think the “Trump Effect” merely postponed gold’s breakout by 1 or 2 years. The business cycle is still very mature, and earrings will probably begin to slip again next year. The yield curve is nearly inverted and that almost always precedes a recession. More on that later.

However, I believe the primary driver behind gold is consumer sentiment. Right now the average guy isn’t thinking about gold. The stock market is making new highs, wages are up, inflation is modest, and unemployment is at multi-year lows. He couldn’t care less about gold. Don’t believe me? Ask some ordinary people what they think the price of gold is. If they are within $200, I’d be amazed…some will be off by $1000 or more.

Like him or hate him Trump has been good for the US economy, and that’s made it difficult for gold. To lift prices out of the gutter, we need an economic slowdown (next year), major political event or financial crisis. Gold will catch a bid once consumer sentiment enters a new downtrend. The bureaucrats are trying to seize power back from Trump. If they’re successful and throw him out of office, gold will soar.

In the meantime, I think we need to respect golds downtrend and the current bear flag configurations in silver and miners. If prices are going to break lower, they will likely do so next week. Precious metal investors must remain nimble, and we may need to look at other markets for trading opportunities. I think both oil and bitcoin are close to meaningful tops.

-CONSUMER SENTIMENT- Consumer sentiment tells the story. It’s a challenging environment for gold when consumer sentiment is in an uptrend and near multi-year highs. Sentiment bottomed in 2011 at 55, that’s when gold topped at $1923. Consumer sentiment has been trending higher ever since. It began to breakdown in 2016 (red arrow) but reversed, that dip coincided with gold’s rally to $1377. The trend once again looks weak and is beginning to rollover. Dropping below 86 (currently 96) will establish a downtrend, and that is an excellent environment for gold. 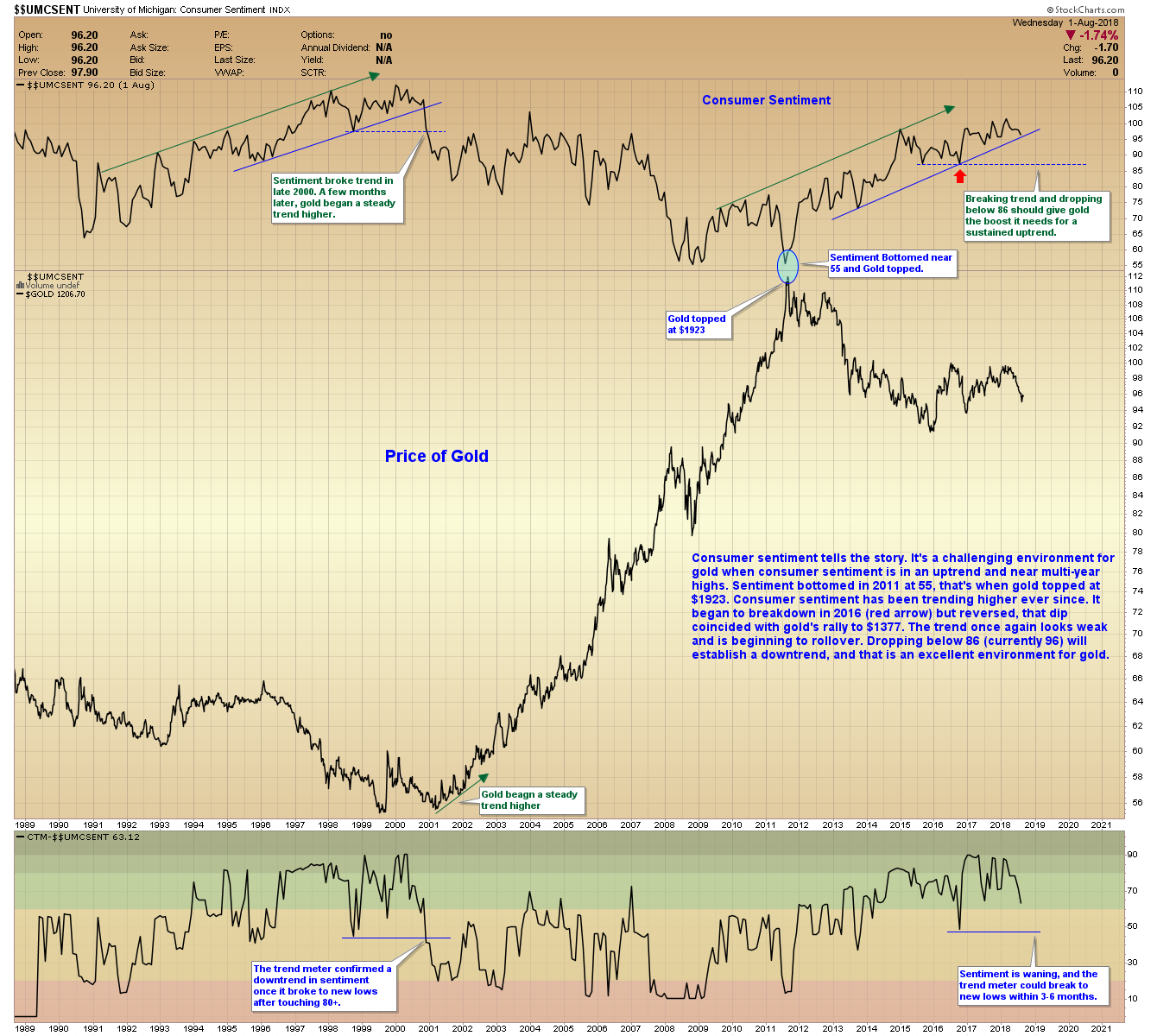 -YIELD CURVE- The yield curve (2’s vs. 10’s) is almost inverted. Meaning the 2-year note (2.62%) has nearly the same yield as the 10-year note (2.86%). An inverted yield curve almost always precedes a recession and bear market in stocks. I believe yields will invert in 2019. A breakdown in consumer sentiment will follow. The topping process in stocks is usually choppy and often volatile. The stock bear emerges from its den when consumer staples begin to outperform discretionary stocks dramatically (bottom indicator). Trump’s policies extended the business cycle, but it is still very mature. The stock market will likely top in 2019. Breadth will begin to wane near the top as fewer, and fewer stocks make new highs with the market. Money will begin to flow out of discretionary stocks and into consumer staples, utilities, healthcare, and financials. That shift in sentiment will be good for gold. 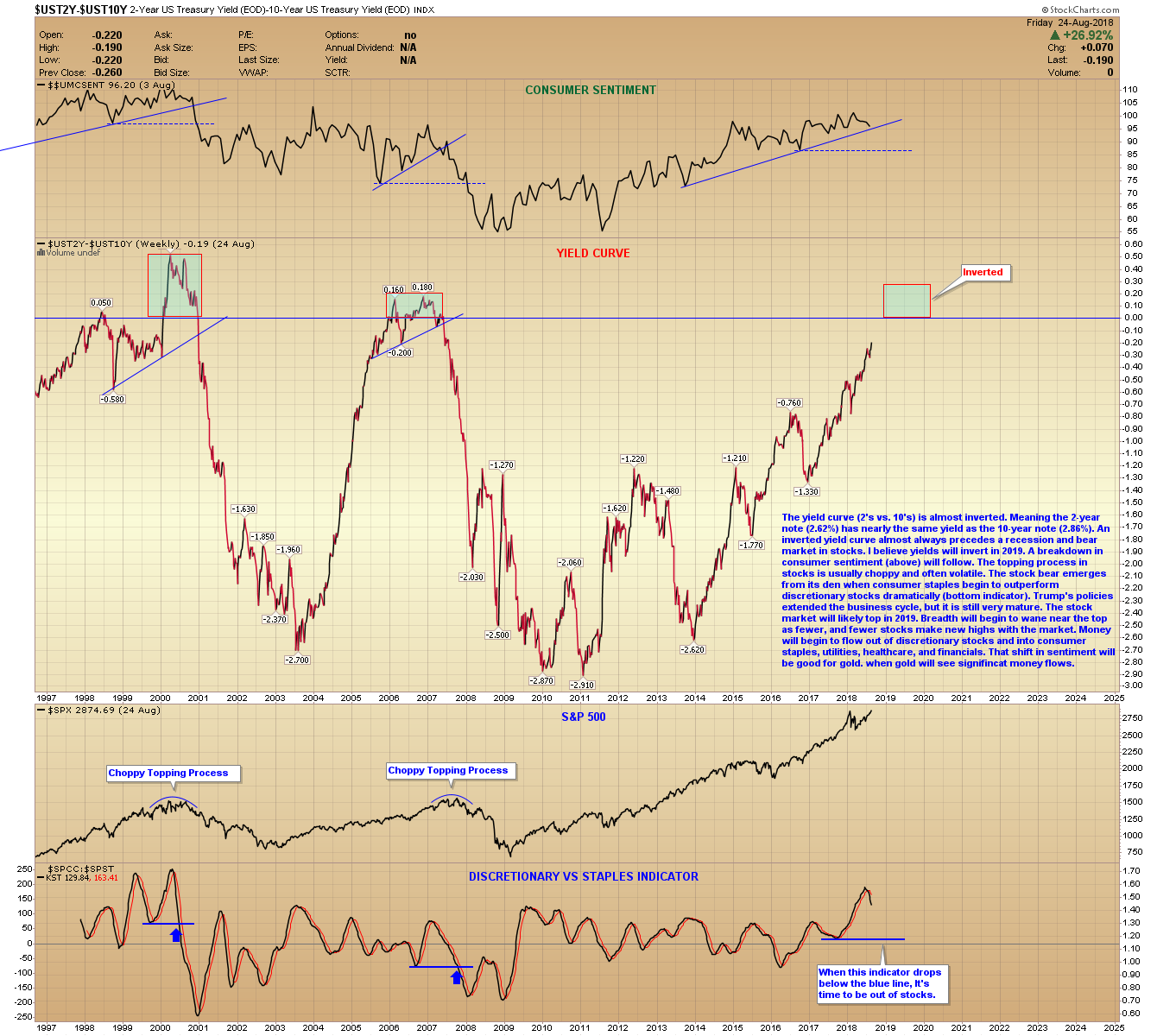 -US DOLLAR- I think the 55-day cycle bottomed on Tuesday (52-days). Prices would have to reverse sharply early next week to suggest otherwise. A swing low formed, and prices closed above the 10-day EMA. Closing above the 95.62 pivot will confirm a cycle low. 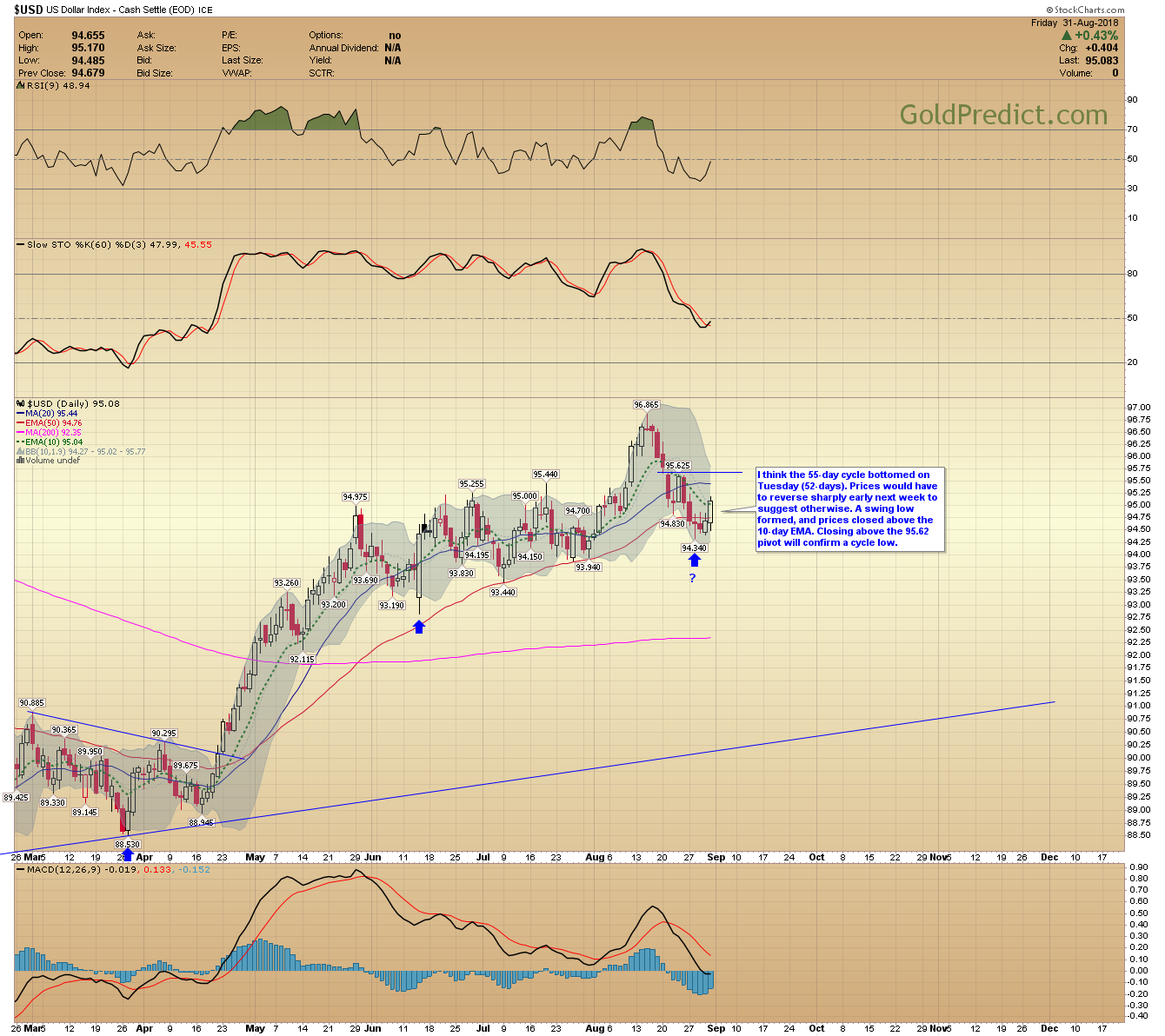 -GOLD- If the dollar bottomed then gold probably topped. Follow-through lacked after last weeks bullish engulfing day. The rebound off $1167 has been unimpressive. Caution is warranted. The price action Tuesday and Wednesday will be key. Closing below $1200 and then $1189 will imply a test and potential breakdown below $1167. Gold would have to close above $1215 early next week to break the bearish tone and make another run at $1220. Traders will have to remain nimble. 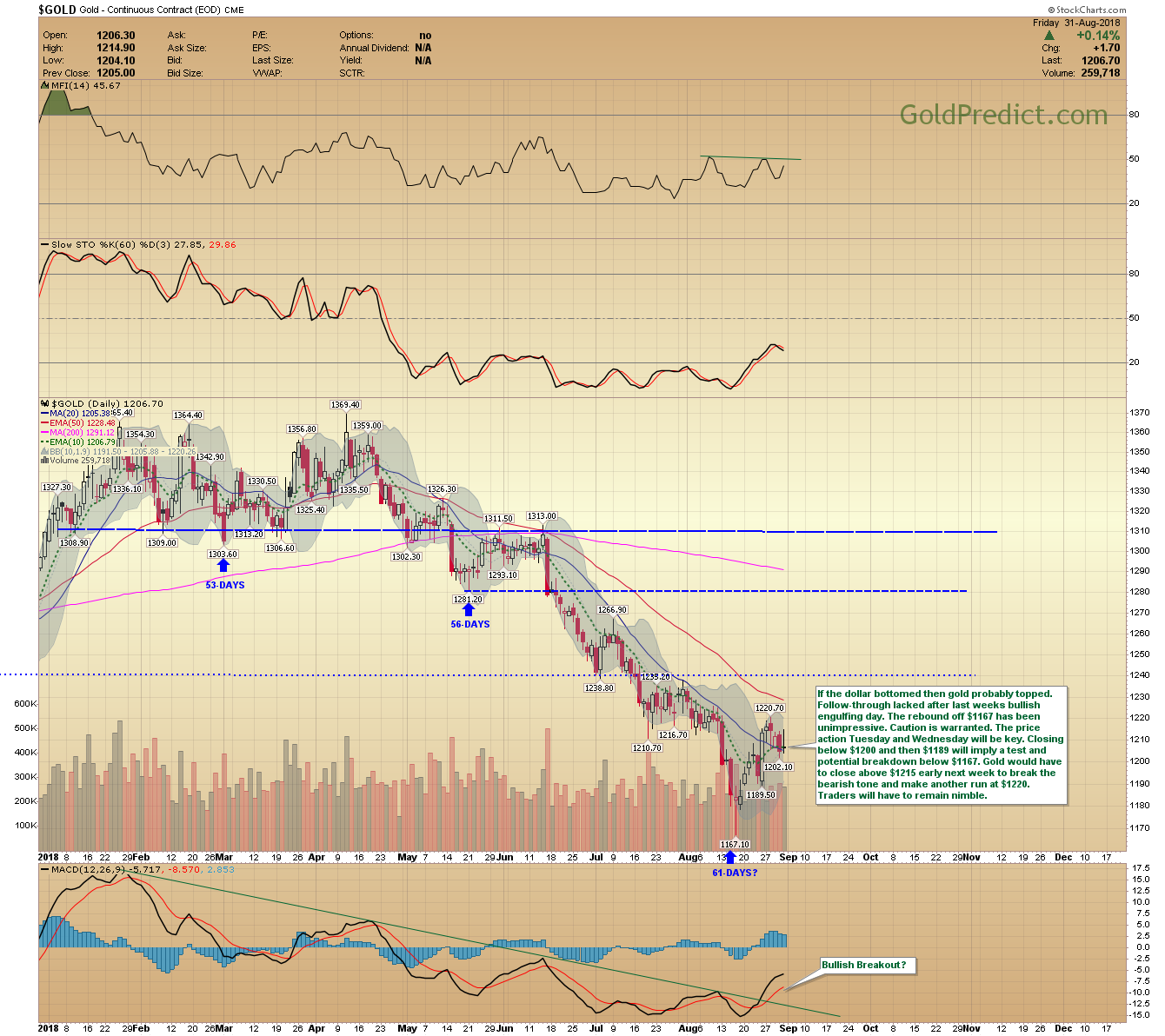 -SILVER- Silver looks much weaker than gold. Prices reversed Friday and closed below the lower flag boundary (again). A breakdown below $14.31 early next week could send prices sharply lower. The next support level arrives around $13.65. Prices would have to rally and close above $14.80 to nullify the bearish setup. 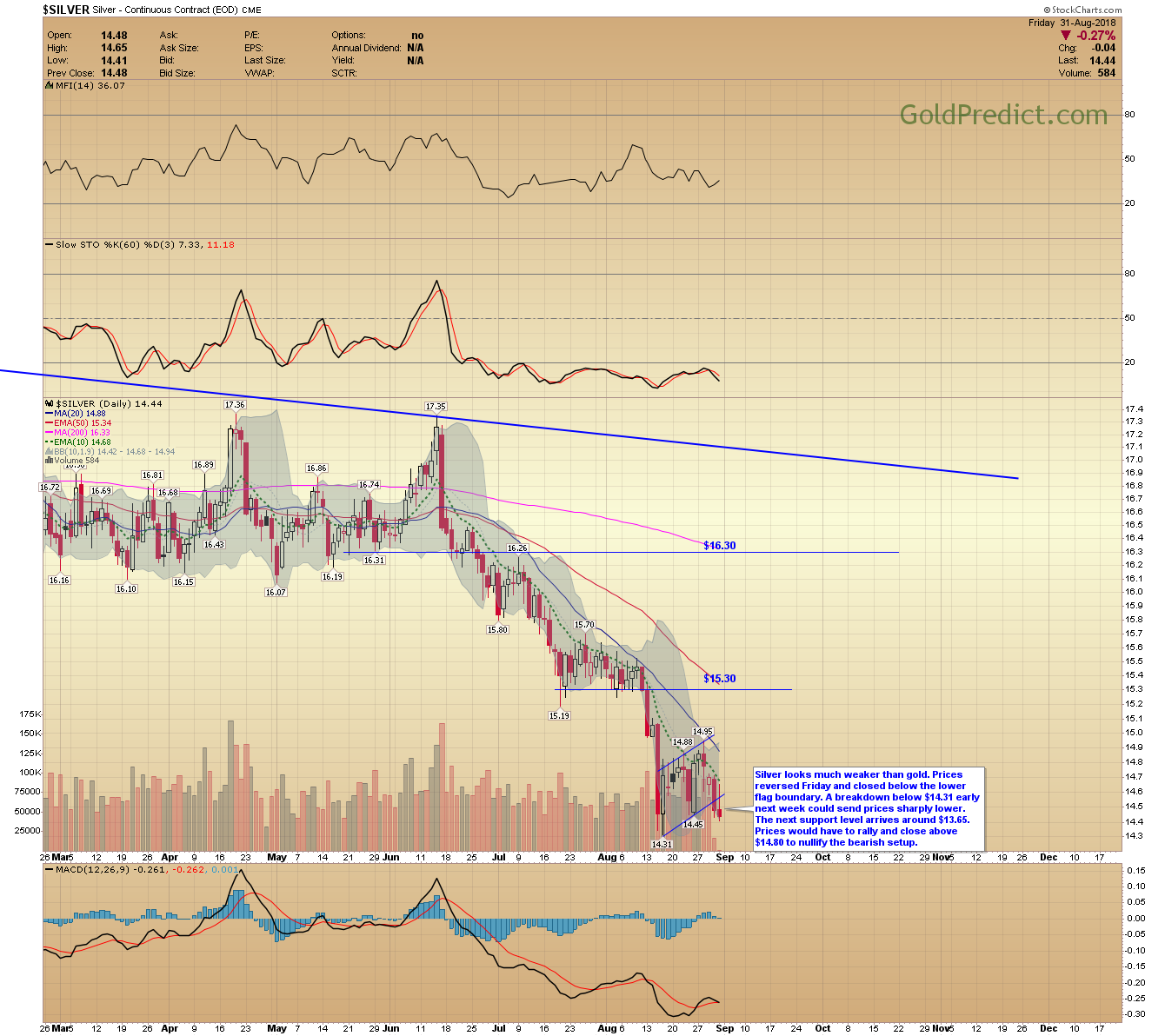 -GDX- Miners closed below the lower flag boundary. If this is a true bear flag setup, then prices should break sharply lower early next week. Again, I think the setup is a little too obvious, so I won’t be surprised if it doesn’t play out. However, it would have been unwise to ignore it. We should know by Wednesday if prices are indeed breaking lower. 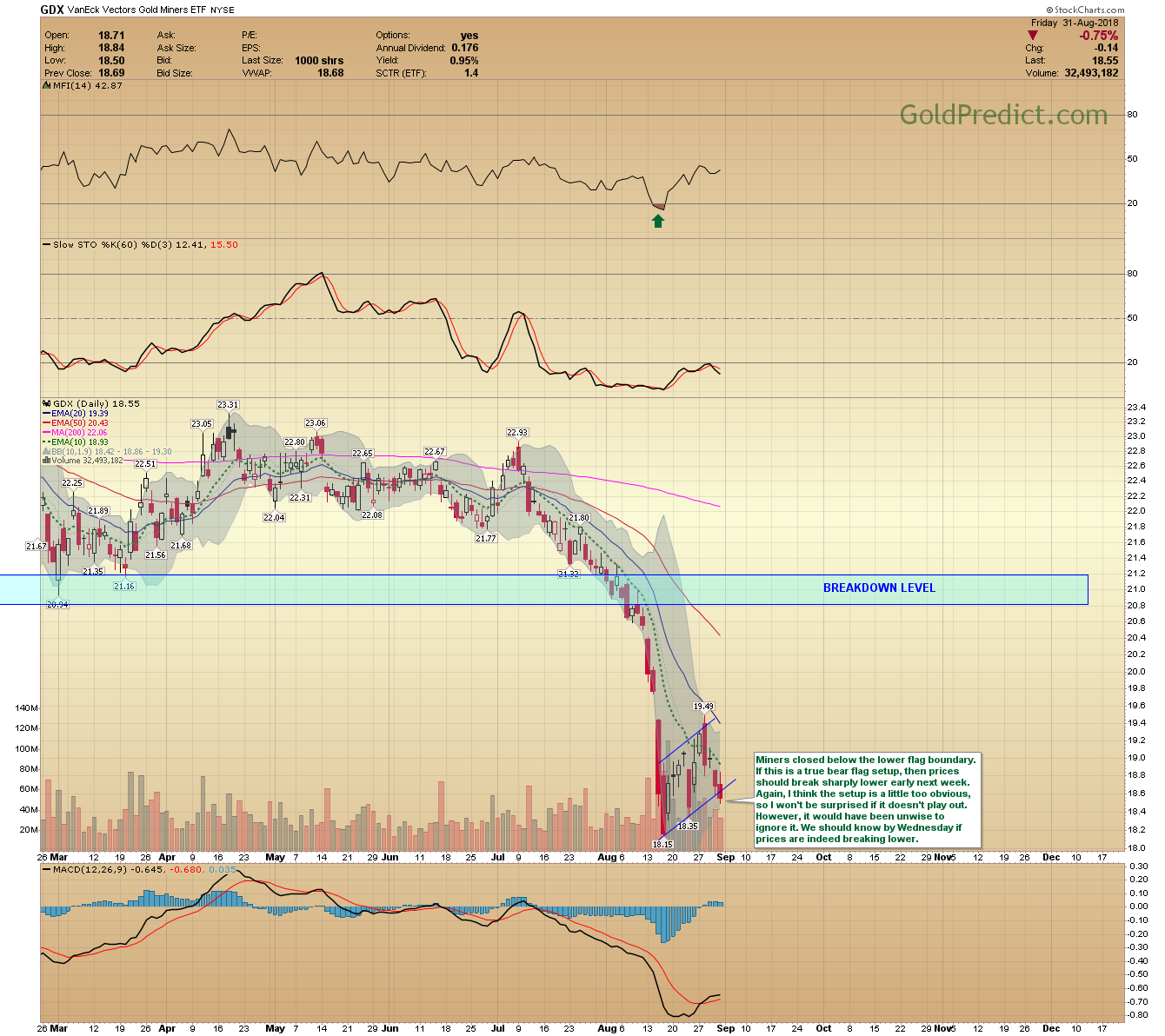 -GDXJ- Closing below the lower boundary in juniors could send prices sharply lower next week. 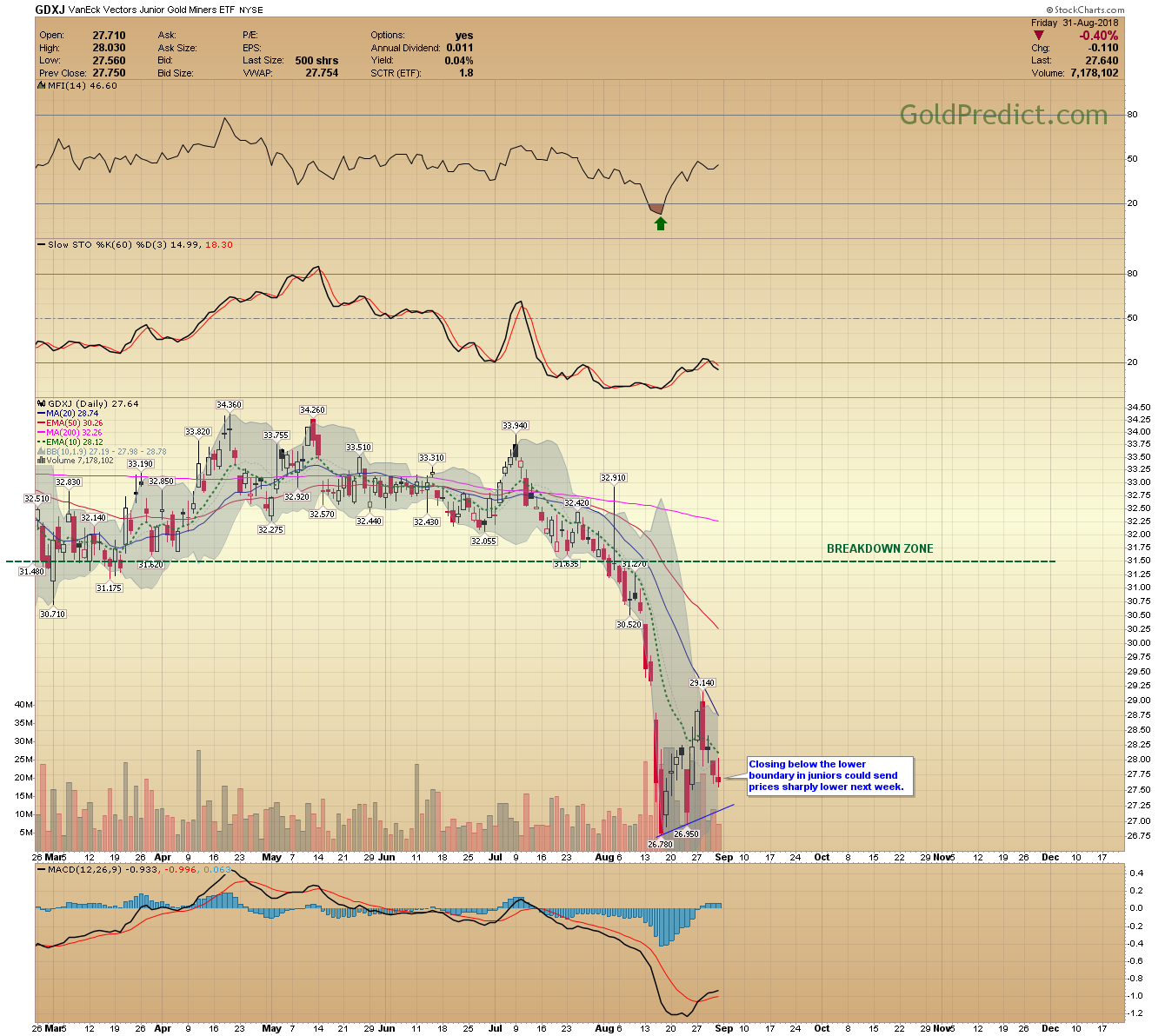 -SPY- The intermediate cycle is mature, and we could be approaching a top. A September selloff is possible. Closing below the 288 gap would support a top. A stock market selloff would likely correspond with a decline in oil. A sharp correction in stocks may intensify a breakdown in miners. Note, fewer stocks are making new highs compared to January. 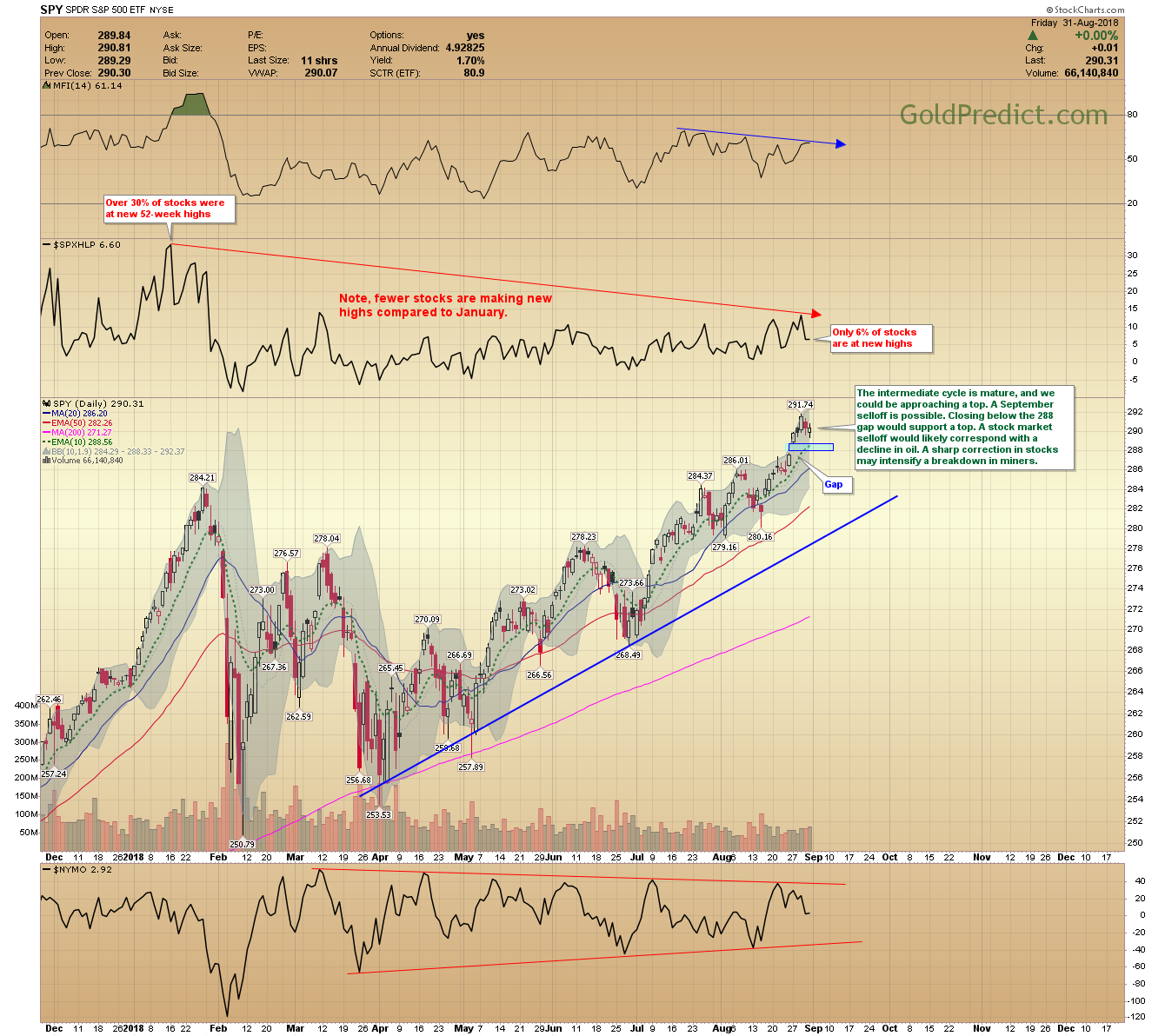 -WTIC- I think crude is approaching a significant top, perhaps next week. I’ll use the next swing high to signal initial positions in SCO and ERY. 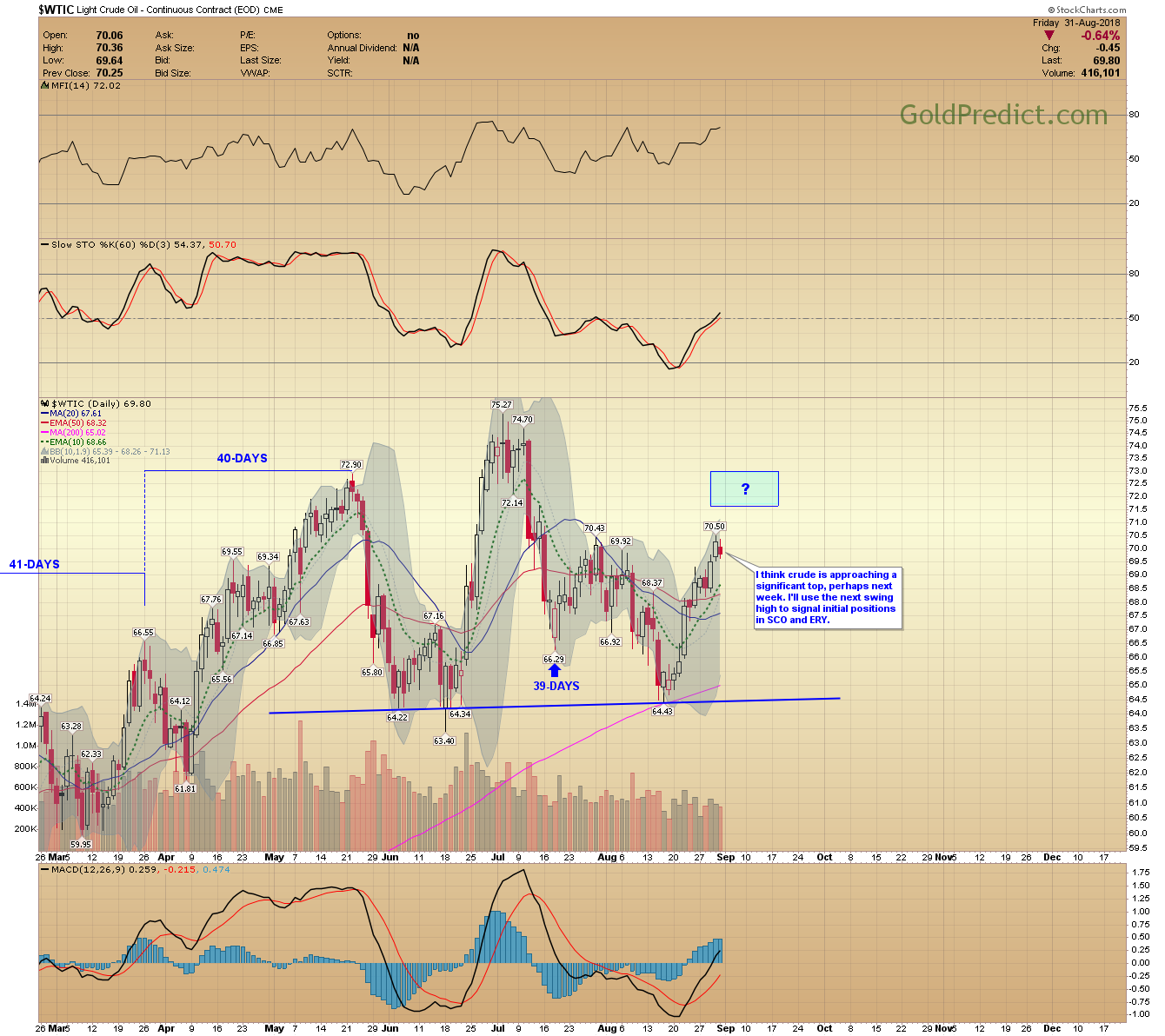 For the time being, I’m turning the indicators to neutral for metals and miners. I think long-term investors can continue to cost-dollar-average into physical metals at these levels. However, short to medium term investing will remain difficult until there is a meaningful breakdown in consumer sentiment. A significant political event (Trump impeachment talk) could change things instantly and send gold immediately higher.

US Markets are closed Monday for Labor Day.

This article was published Posted on September 2, 2018 in Categories Free Updates, Weekend Newsletters