Tomorrow will be a volatile and decisive day. Sometimes the initial reaction after a big Fed announcement is misleading. It can take a day or two to read between the lines and acquire the correct market direction.

I’m a little surprised by the bidding up of miners heading into tomorrow’s announcement. However, there was some selling into strength today in GDX. I’m still leaning towards a top in metals and miners, but I may have to switch gears if the Fed is overly accommodative on interest rates. Time will tell. In the meantime – take a deep breath and try not to panic. Impulsive/emotional decisions are almost always wrong.

I’ll update several times tomorrow. The Fed announces at 2:00 PM and Powell speaks at 2:30. Usually, the trend stabilizes between 3:00 – 3:30 PM. Thursday could be tricky as well. We should have a handle on things by Friday.

-GOLD- Resistance resides between $1258 – $1270. If we are going to see a top within the next 72-hours, it should develop between those numbers. Finishing the week above $1270 would extend the rally and support a test of $1300 – $1310 by year-end. That would likely be the result of an overly accommodating Fed. 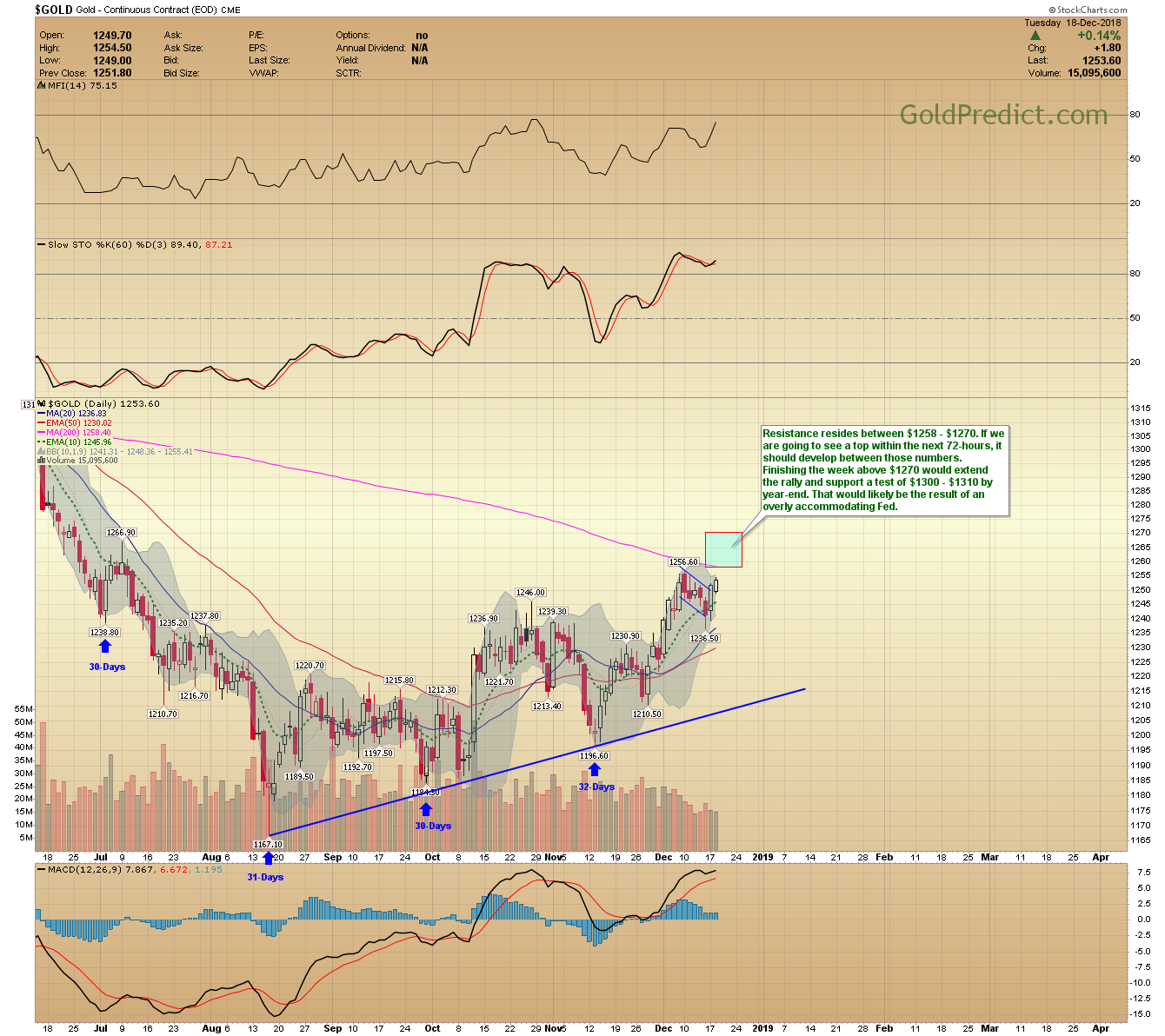 -SILVER- Prices remain within the 4-month range. As I said, it’s been best to sell breakouts and buy breakdowns in silver over the last year. I don’t think that has changed. Consequently, a spike above $15.00 after the Fed announcement could turn out to be another trap. I’d need to see a sustained breakout above the 200-day MA to convince me of a renewed bull phase. A breakout above $15.00 that slips and closes back below $14.80 would become an opportunity to short. 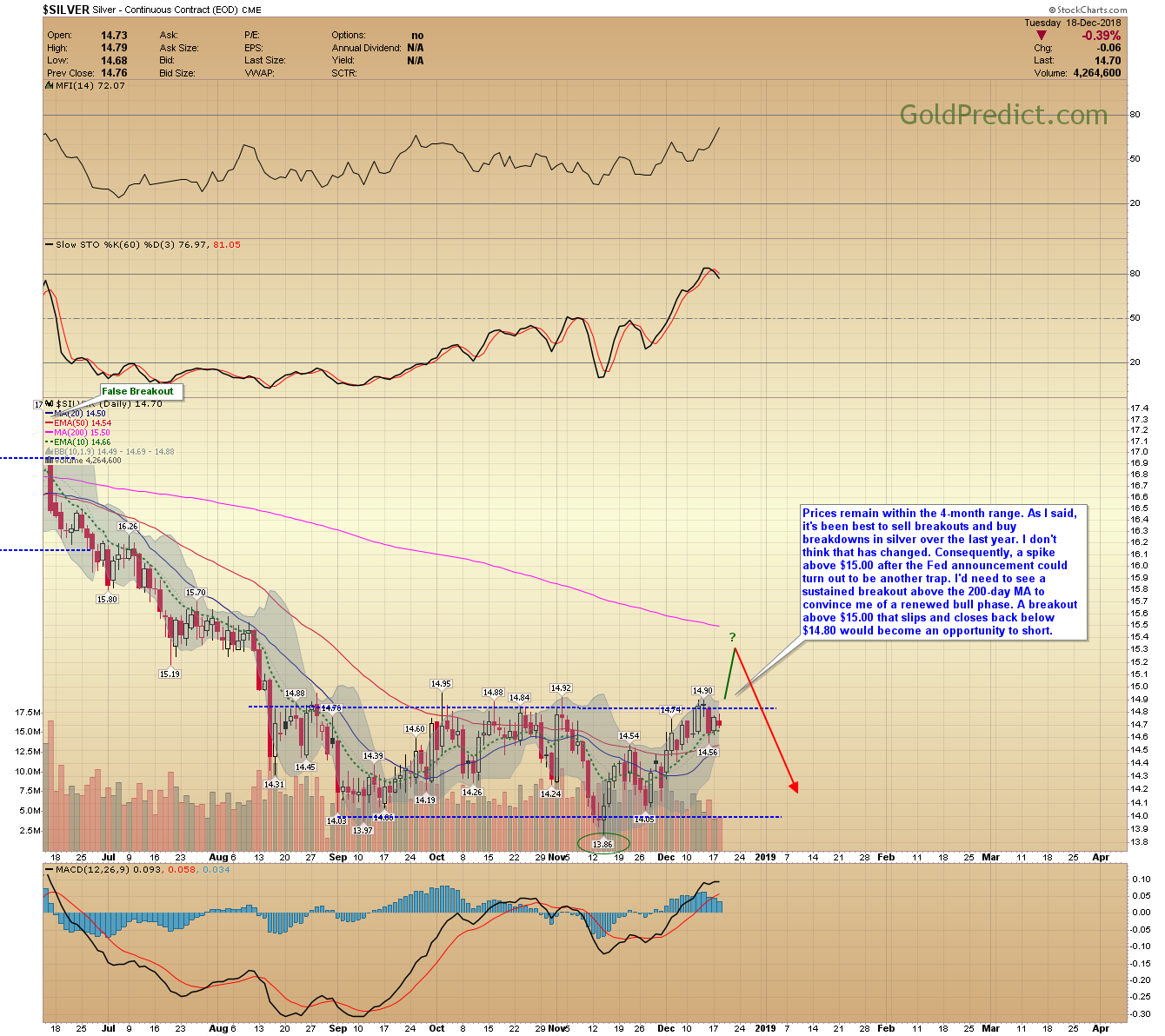 -GDX- Here’s an example of how I occasionally deploy Elliott wave theory. The overall structure appears corrective. The A-wave took roughly 24-days. The B-wave bottomed in November. An ABC measure move is when the C-wave is equal to the A-wave. Tomorrow is the 24th trading day since the November bottom. To match the A-wave, prices need to hit between $21.54 – $21.67 (depending on how you measure). Let’s see if that area holds. 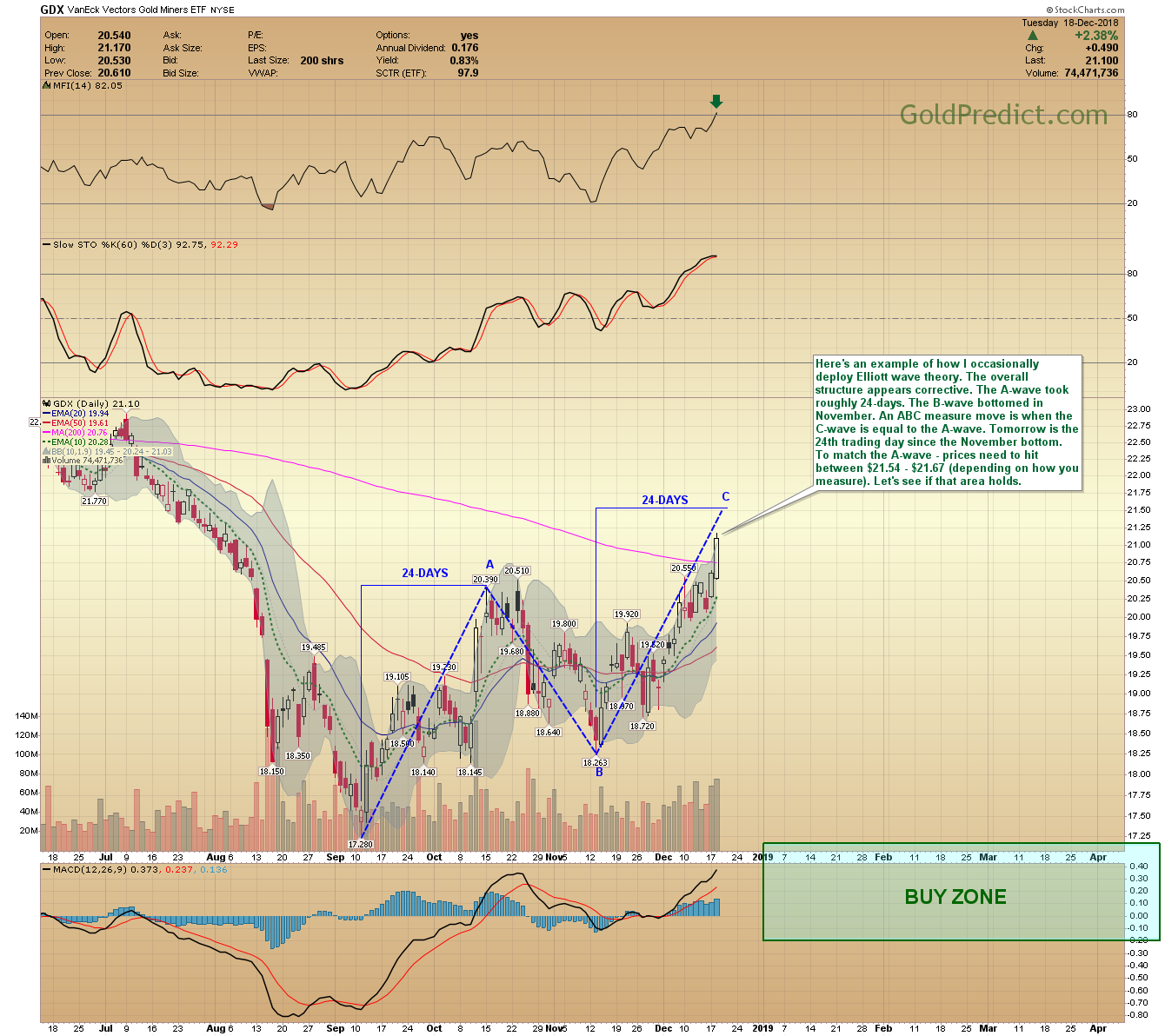 -GDXJ- In Elliott wave terms this would be considered an ABC flat. If correct, then prices should top within the next few days. The MFI is overbought at 88.94. If the Fed is overly accommodative and this turns into a double bottom, I’d look to switch gears and become net-long. Generally speaking, it’s unwise to buy into an overbought MFI, and when prices above the upper Bollinger band. 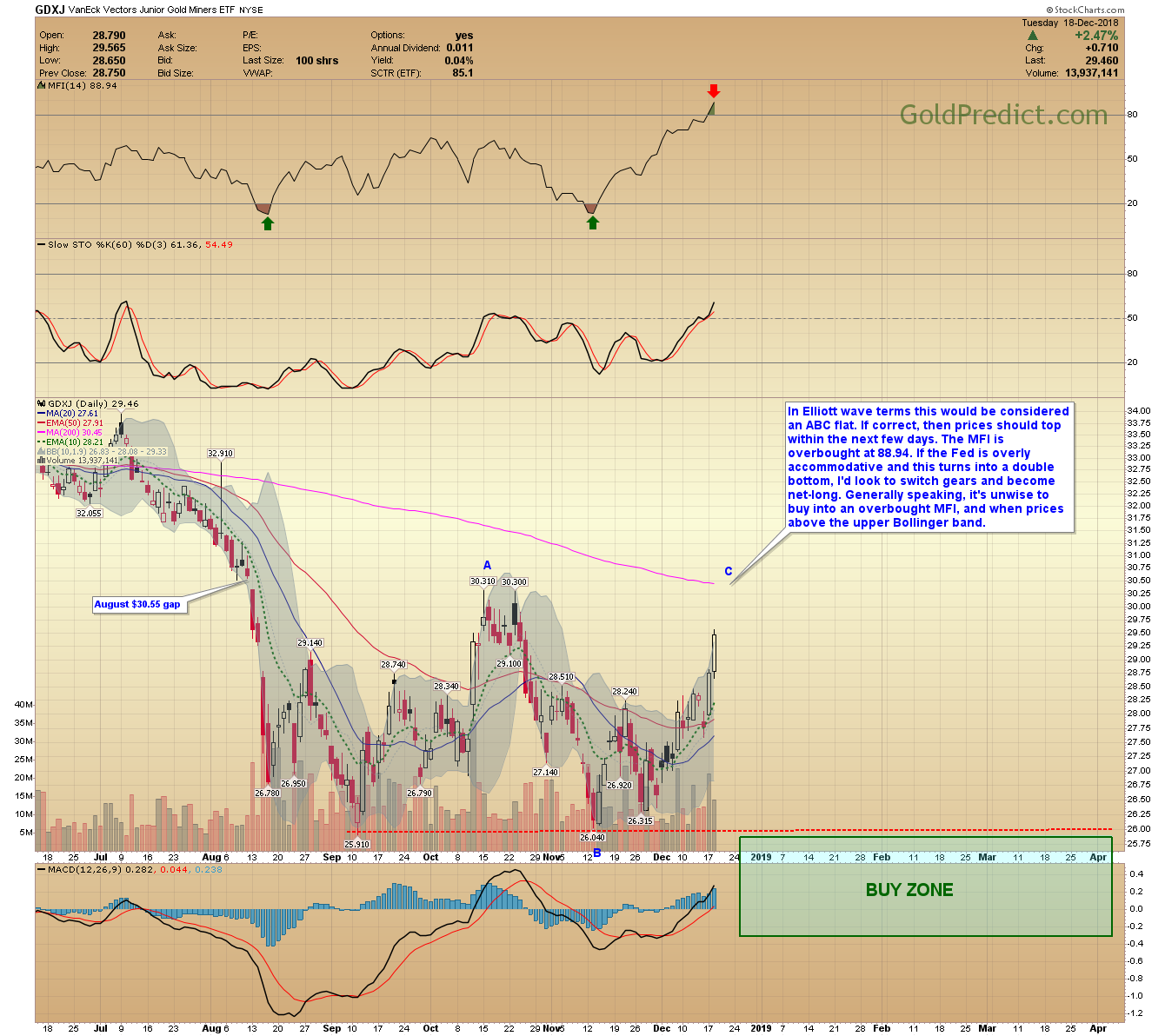 -WTIC DAILY- Oil broke lower from the bearish pennant, and we are in the ’40s. I honestly thought prices would consolidate a bit longer before breaking down. I better start gearing up for long positions. 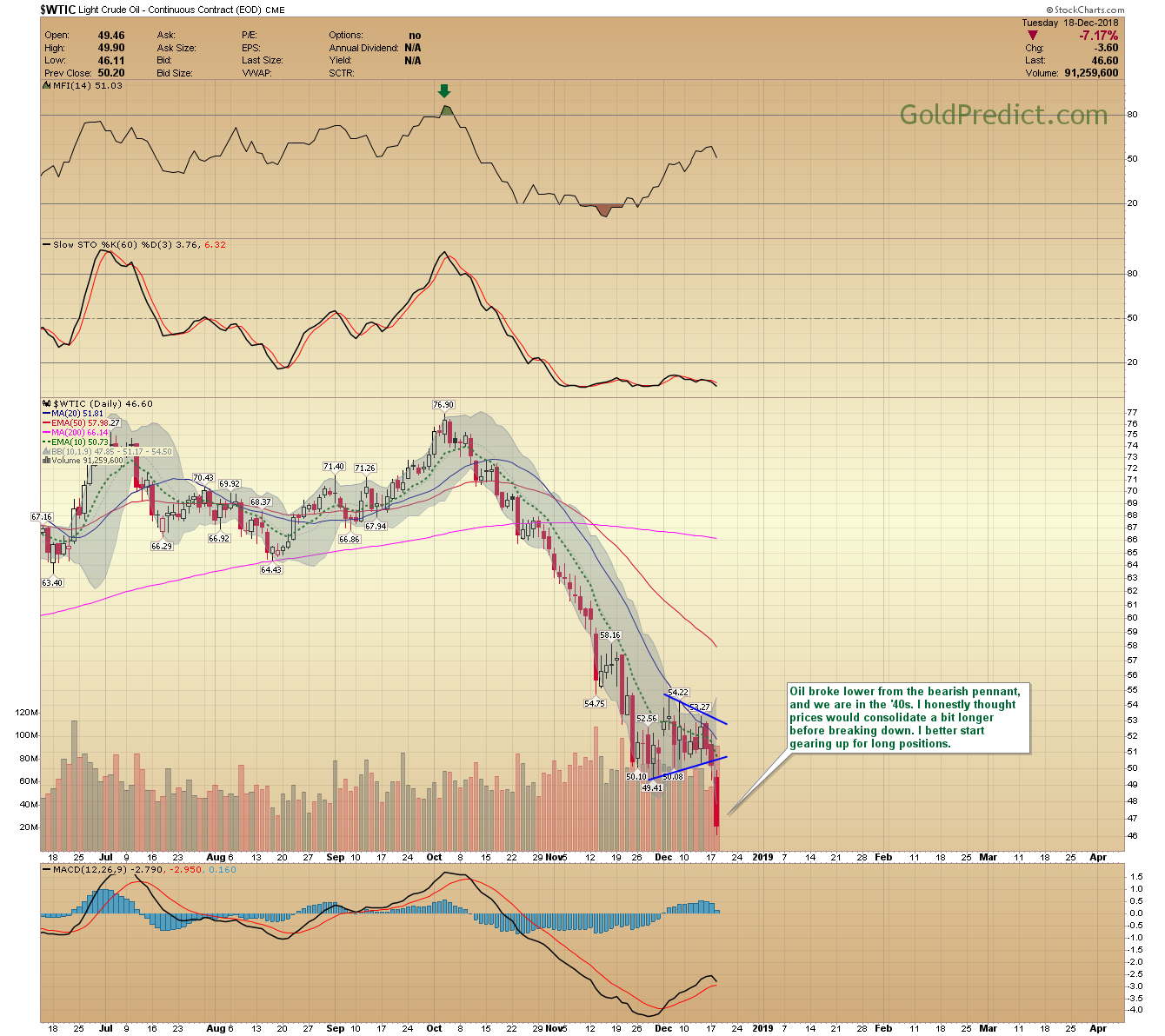 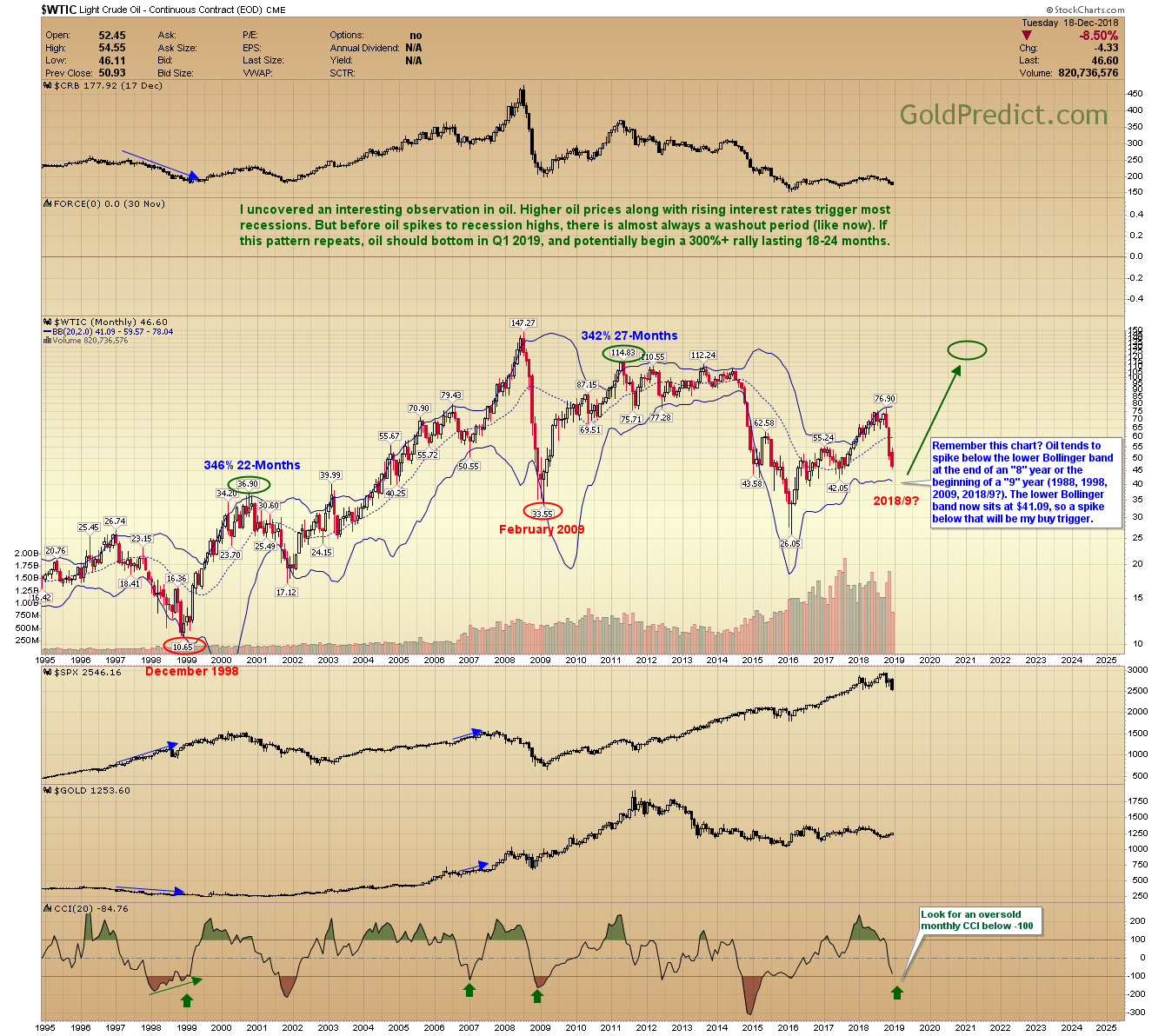 -SPY- Stocks are very close to the long-term trendline. I’ll watch for an undercut of the February low. Support resides between here and 247. 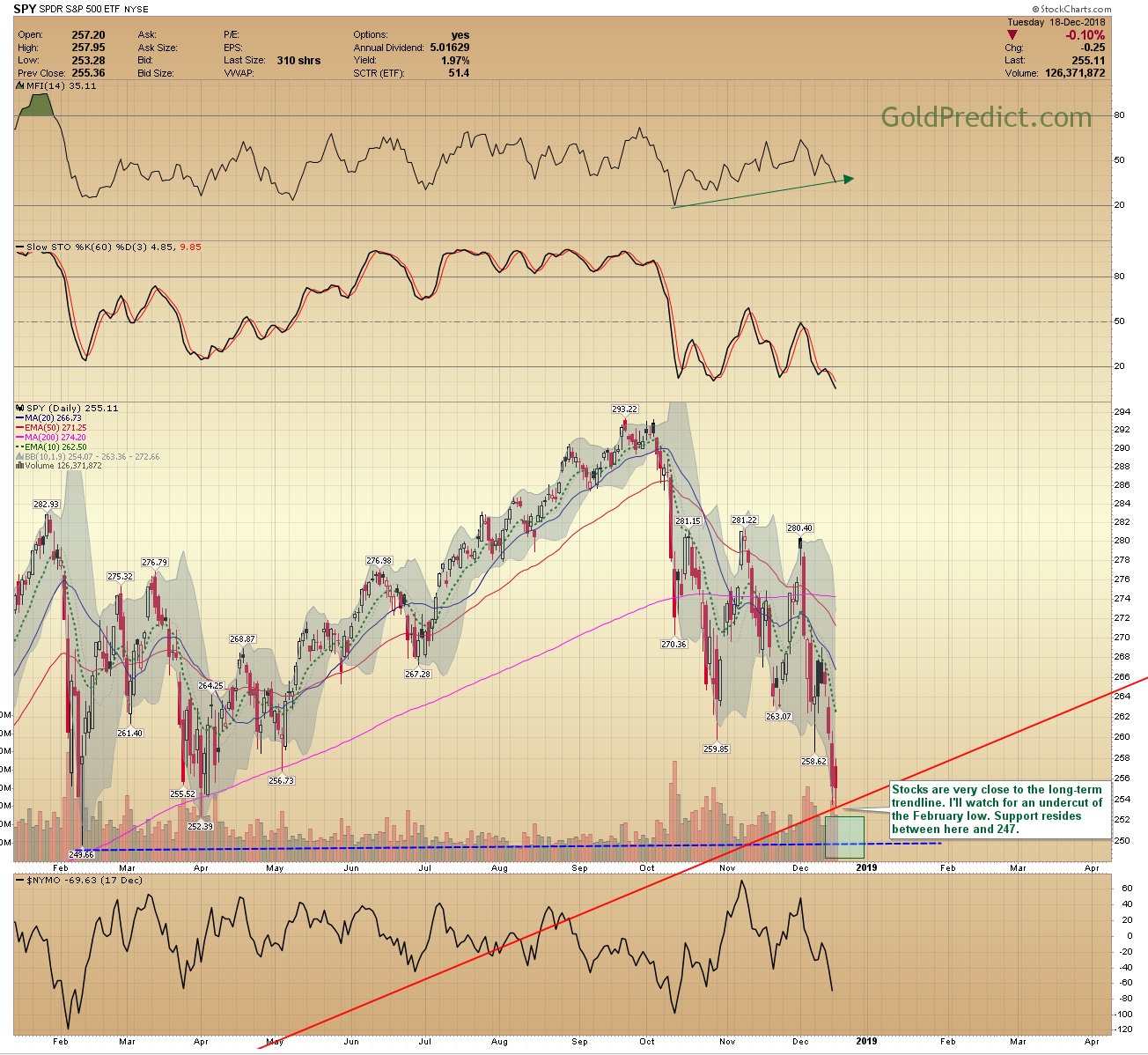 -CRB COMMODITIES INDEX- The CRB is below the cycle trendline. This could be the final slump into the 3-year low. 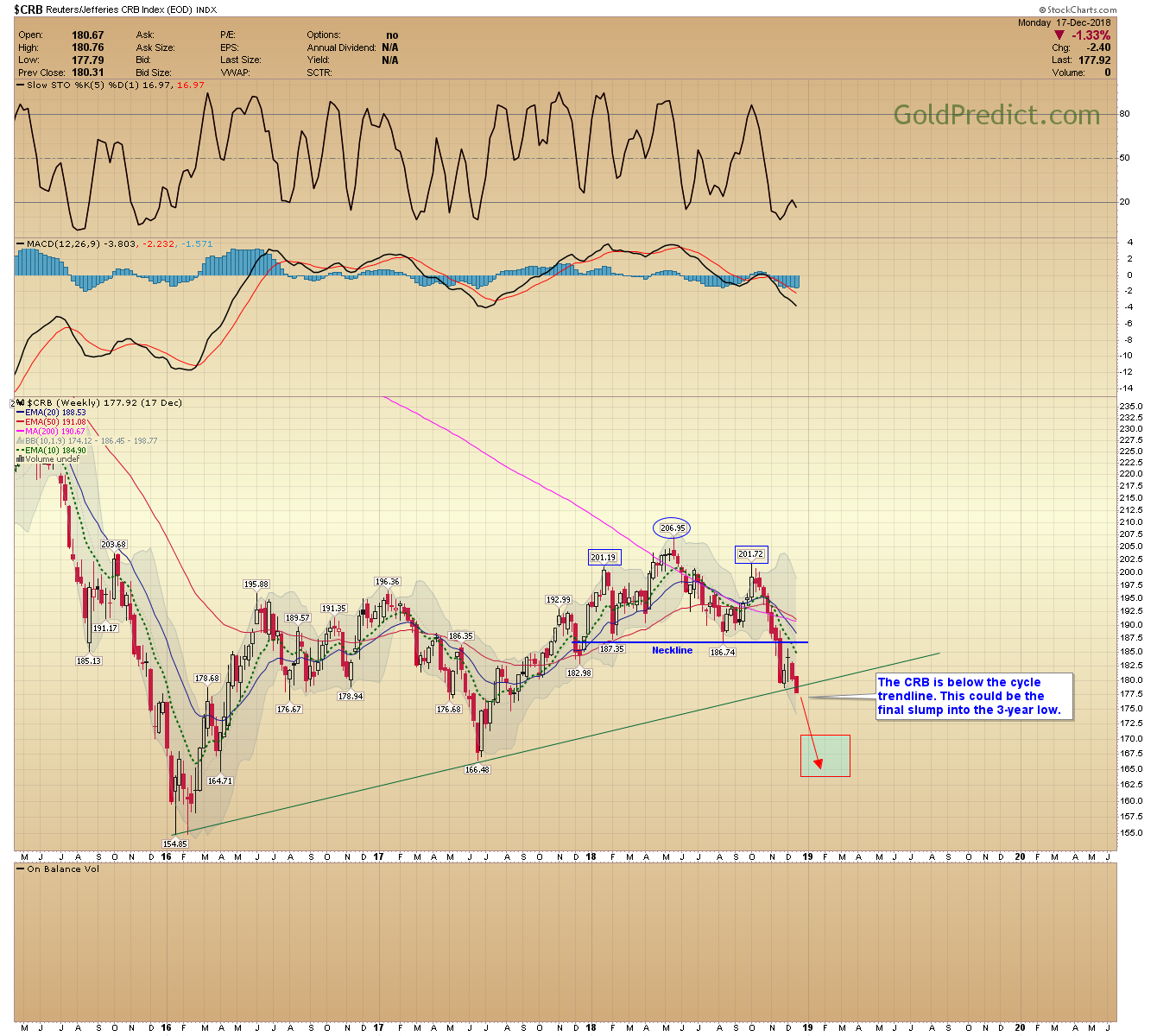 This article was published Posted on December 18, 2018 in Categories Reports