What a wild week – Monday and Tuesday ended slightly negative in precious metals, and we received short-term sell signals into Wednesday’s close. Those signals were quickly annulled after Thursday’s weak retail sales numbers. By Friday’s close, the preceding bull flags in metals and miners were restored.

The tail-end of an intermediate cycle (up or down) is usually filled with one or more broken signals – this cycle is no different. The MACD divergences and slowing momentum support an intermediate top. However, Thursday’s reversal and Friday’s follow-through elect a little more upside followed by a fundamental correction into late March. Unless there is a major political shift, I think the current upside in gold is limited to around $1360.

US markets are closed Monday for Presidents Day. Tuesday’s open will be our focus. If I like what I see, I may consider jumping back into miners to play the remaining upside (1-2 weeks). Natural gas may be approaching a favorable setup – I’ll consider UGAZ early next week.

-GOLD DAILY- It looked like the prior weeks potential bull flags were breaking down on Tuesday and Wednesday. We got a short-term MACD sell signal on Wednesday, and a breakdown seemed likely into Thursday or Friday. Gold was down to $1304.70 and moving lower until Thursday’s inferior retail sales numbers. The market hadn’t seen numbers that feeble since 2009. It spooked investors and sent gold immediately higher. Thursday’s expansion restored the potential for a test of $1360 in February. I would urge caution as the trend is fully mature – the MACD is diverging and recently slipped below the trendline. Note the MACD sell signals: Divergent MACD sell signal and partial trendline break going into Wednesday’s close supported a Thursday/Friday breakdown. 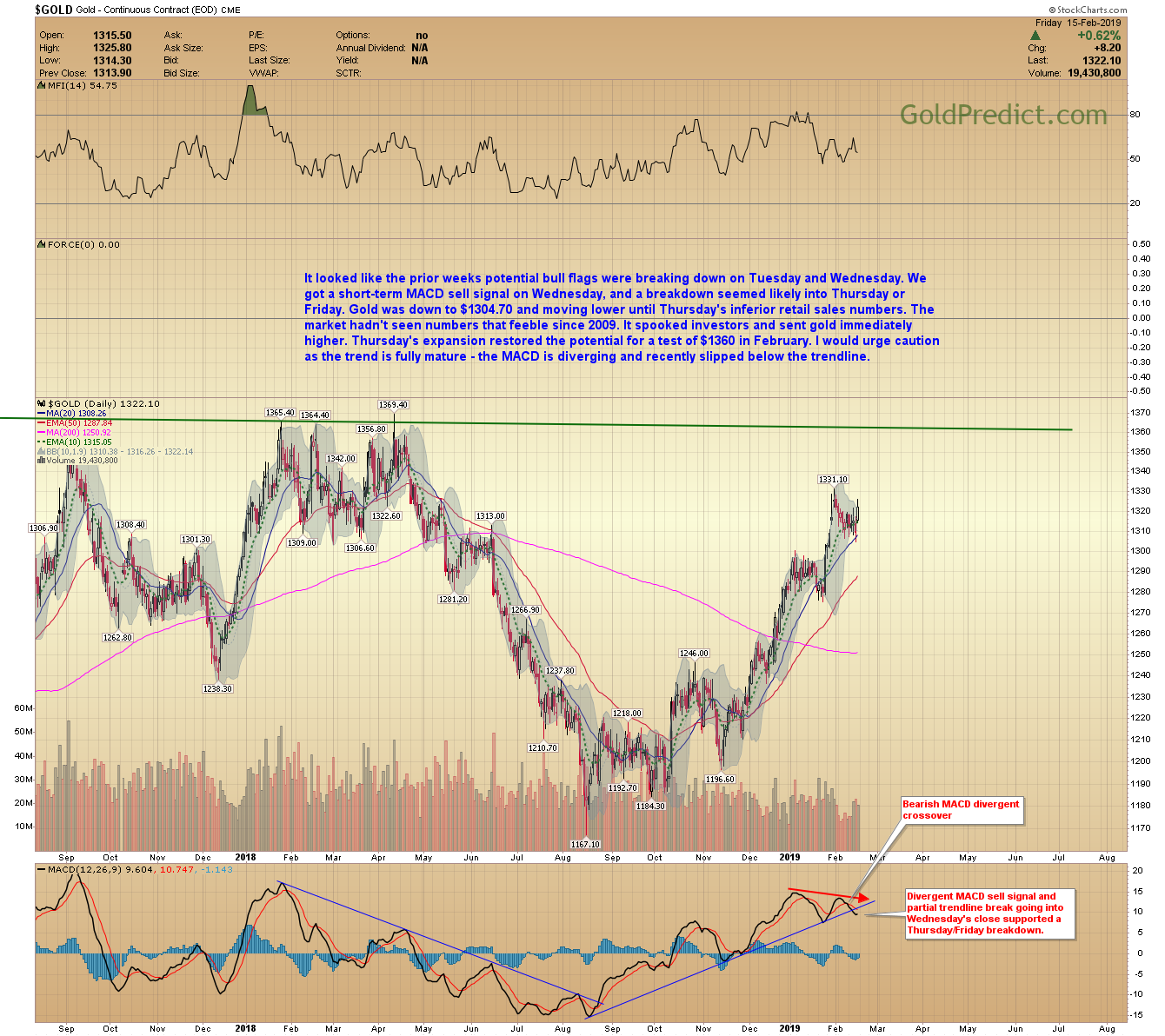 -GOLD WEEKLY- After some persuasive back and forth price action gold finished the week on a positive note – thanks to Thursday’s weak retail sales numbers. A daily close above $1331.10 would trigger a retest of the $1360 area in February. Note- the price action over the last 5-year has been notoriously choppy between $1310 – $1370 making trading difficult. 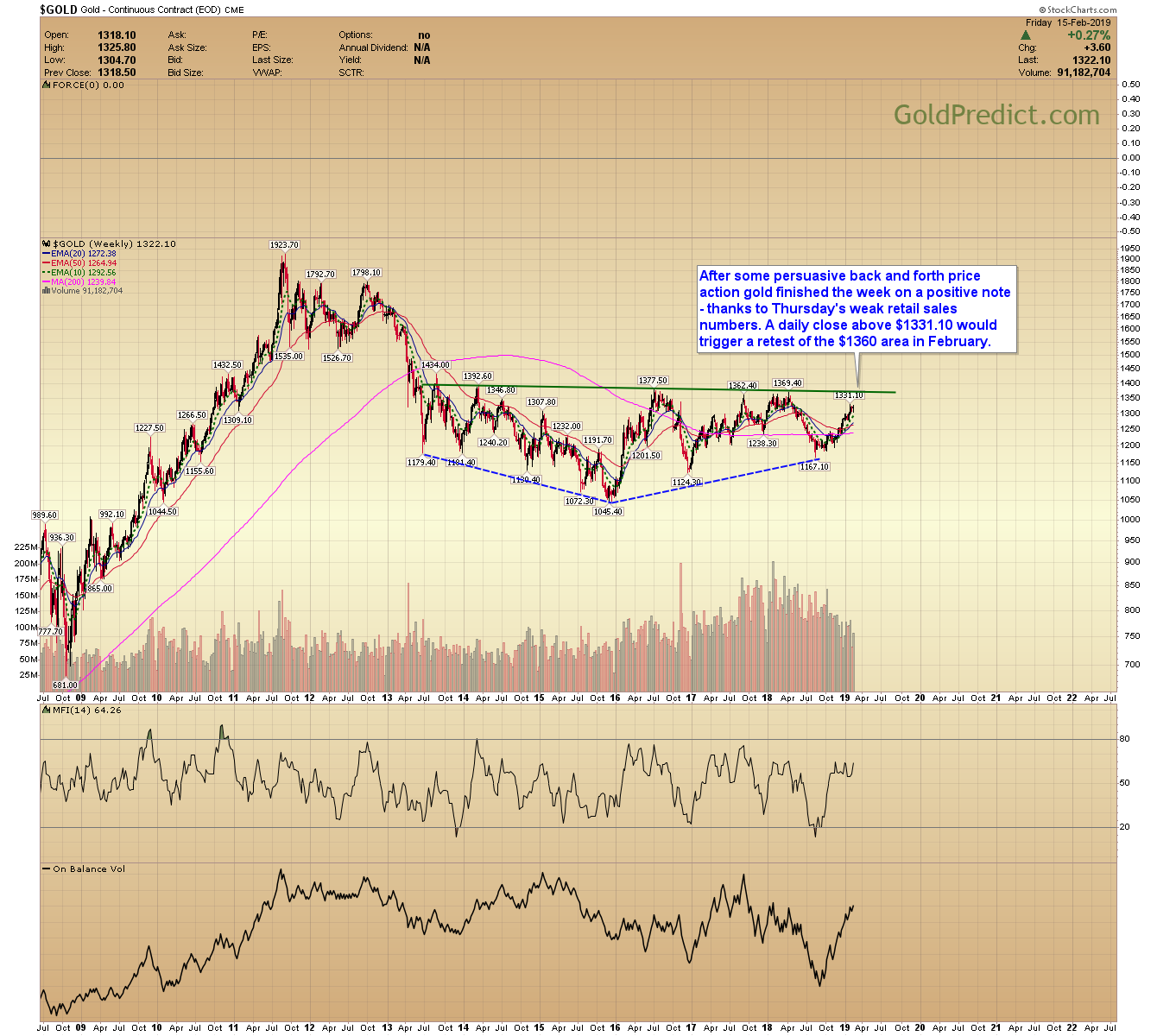 -SILVER DAILY- Like gold, silver had a short-term MACD sell signal. Prices are bouncing a bit and back above the 10-day EMA. Progressive closes above $15.90 would recommend a trip to $16.35 – $16.60 before forming a more meaningful peak. 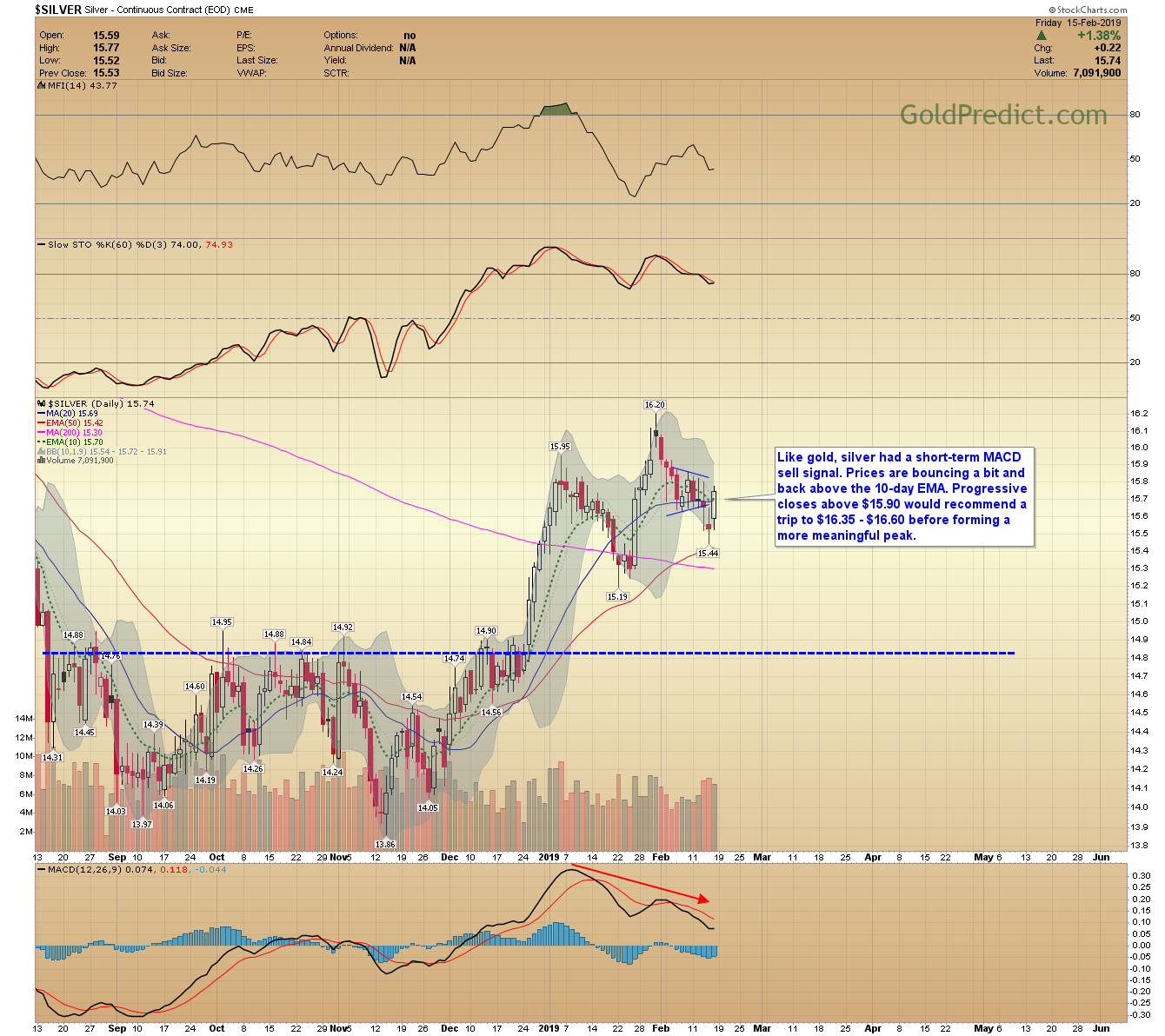 -SILVER WEEKLY- If gold tests the $1360 area in February, silver will likely test the trendline and 200-week MA converging near $16.50. 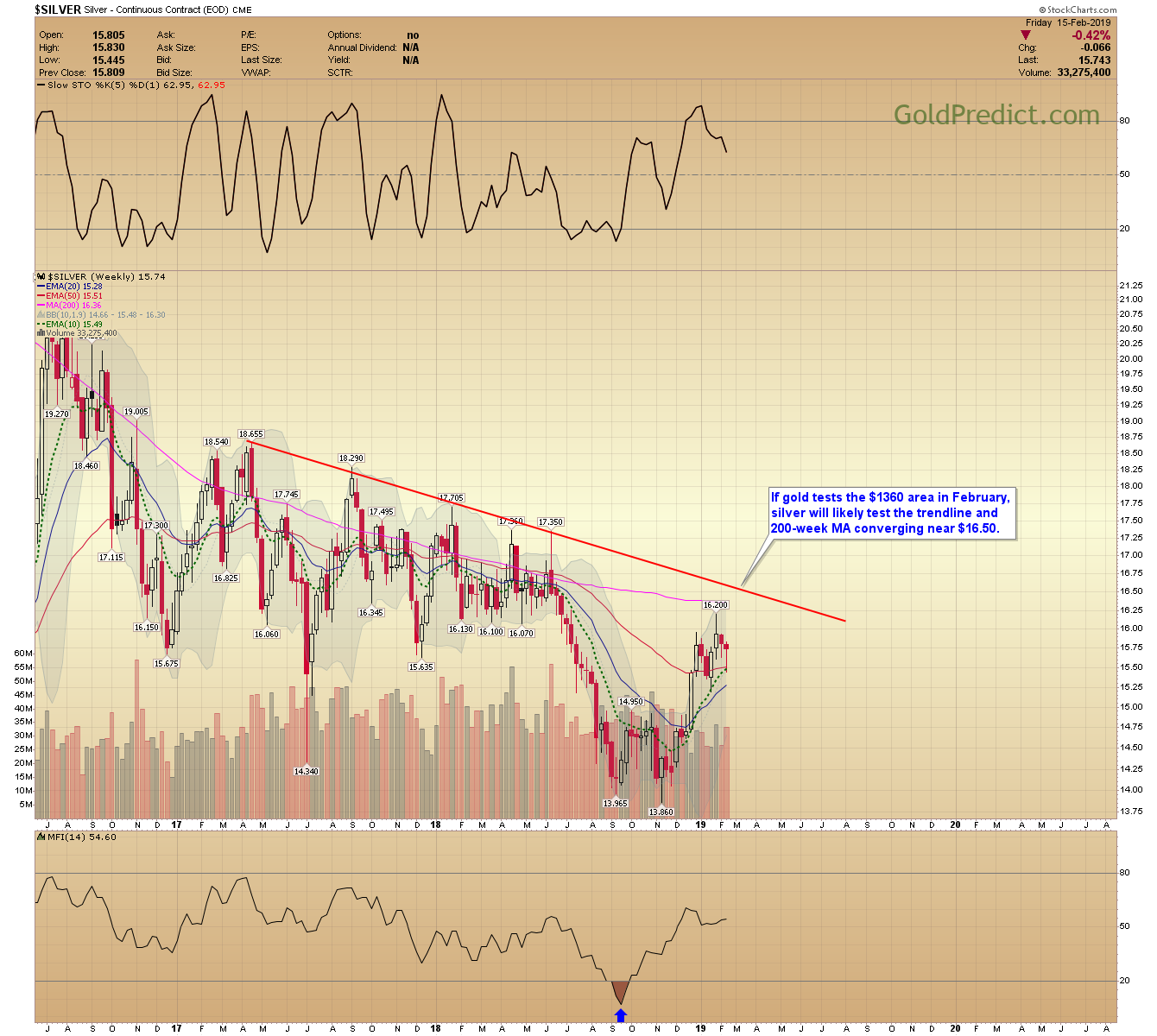 -GDX- Thursday’s retail sales numbers prevented a breakdown on Thursday and may have restored the bull flag potential. Markets are closed Monday for Presidents Day, so we will have to wait until Tuesday to see where prices open. A confirmed bull flag breakout would target $24.50. The next 45-day cycle low should arrive around March 27th. 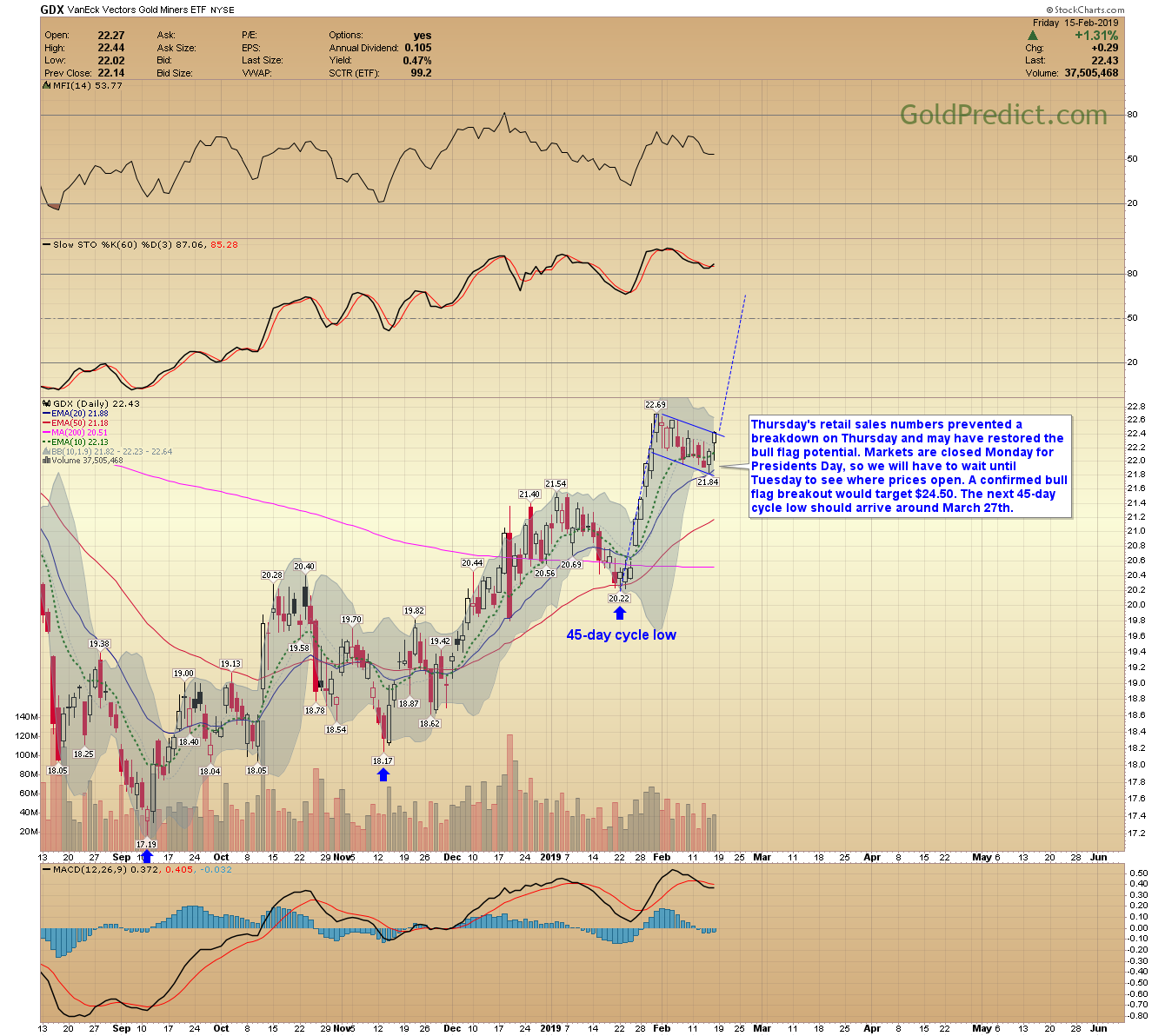 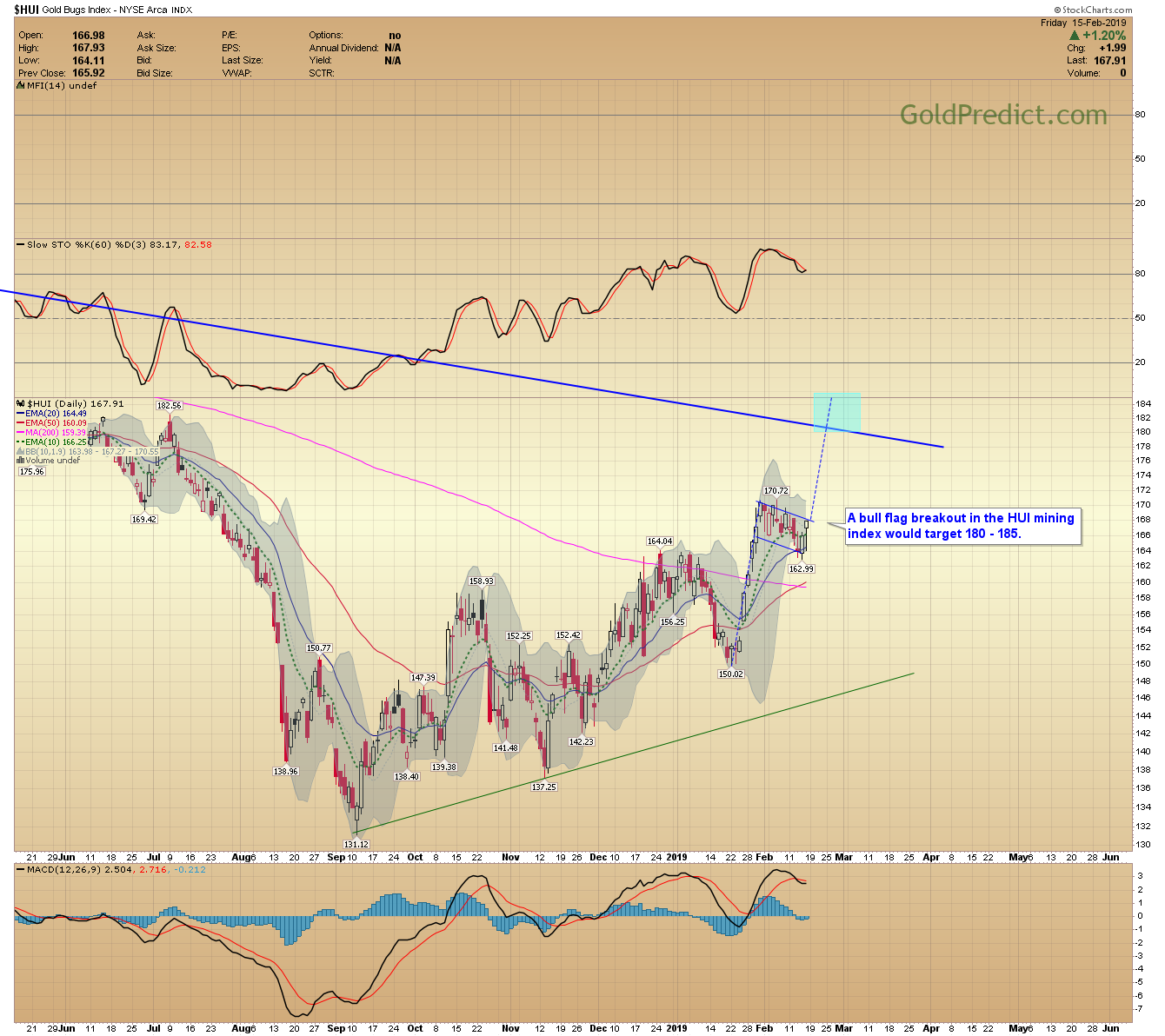 -GDXJ- We had a divergent MACD bearish crossover into Wednesday’s close and that supported a breakdown from the small ascending triangle. Prices reversed after Thursday’s retail sales data and broke higher on Friday. The traditional bull flag target recommends a $35.50 target on a confirmed breakout. However, there is stiff resistance starting around $34.00, and prices could fall short. Note – The bearish divergence and MACD crossover supported a breakdown. The sell signal failed, and prices appear to be breaking higher. 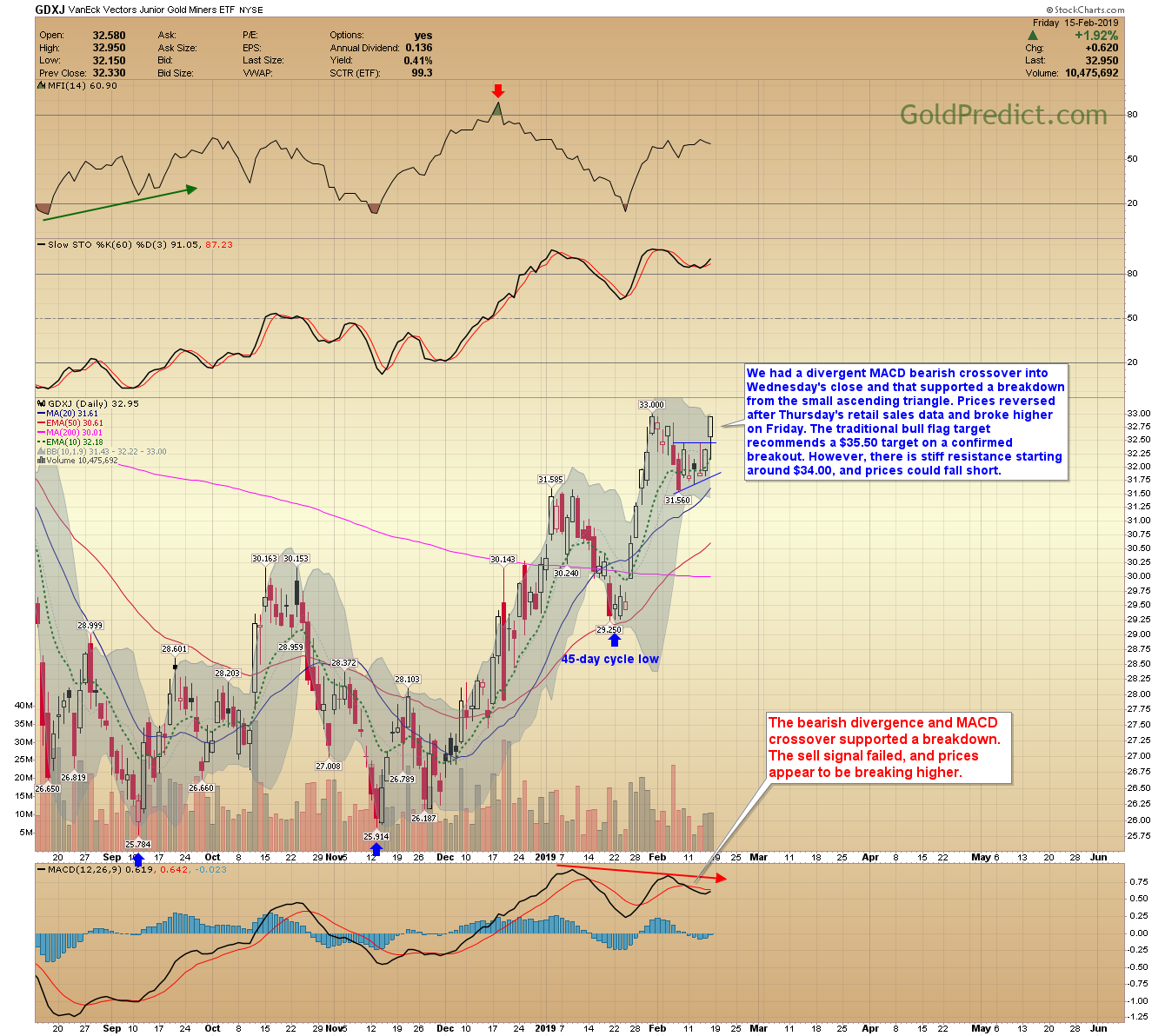 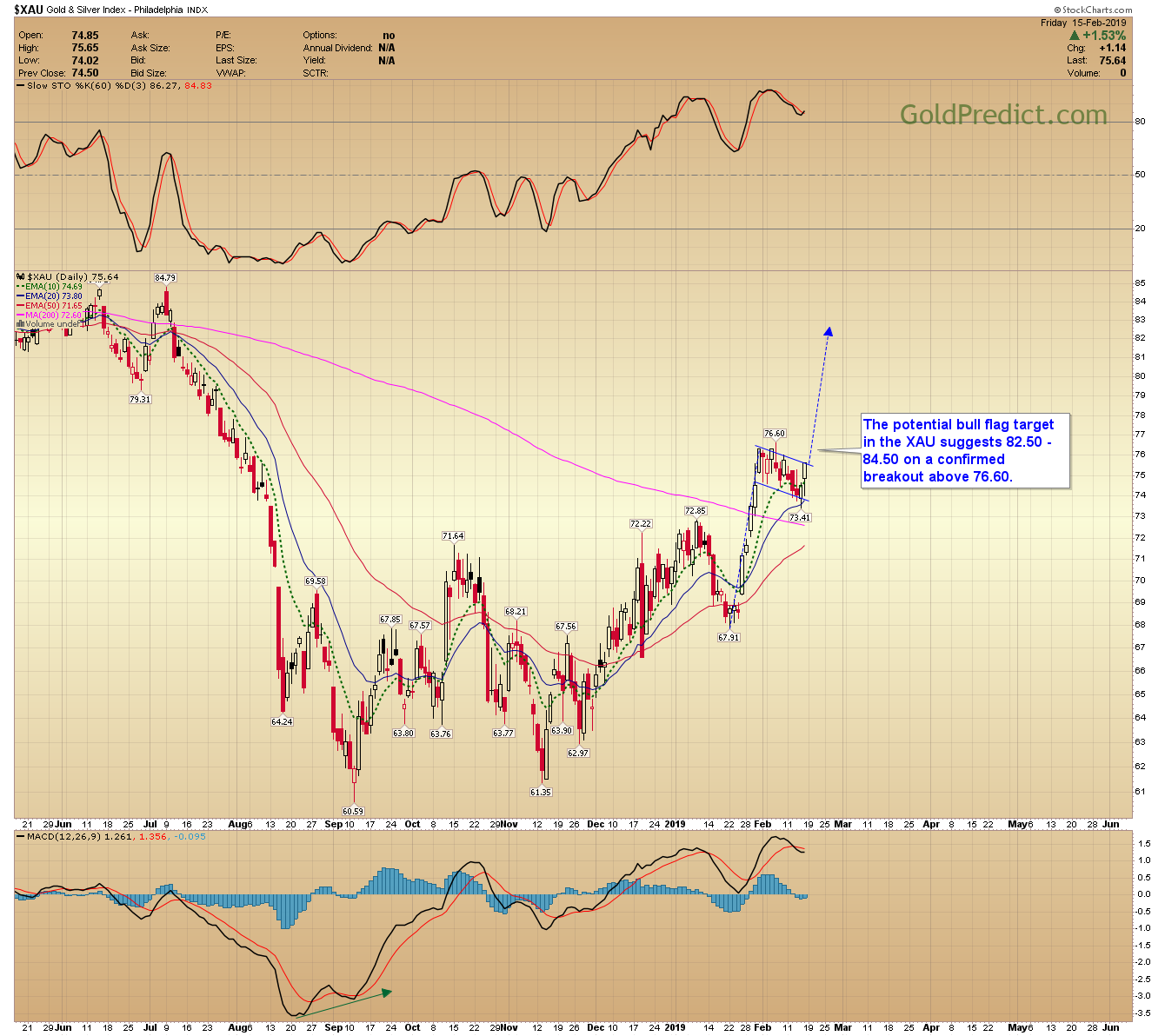 -NATURAL GAS- Natural gas formed a small bullish engulfing candle on a retest of the 2.54 level. The MACD is diverging positively, and a nice rebound is possible. A daily close above the 10-day EMA next week would support an interim low. I’m considering a swing play in UGAZ. 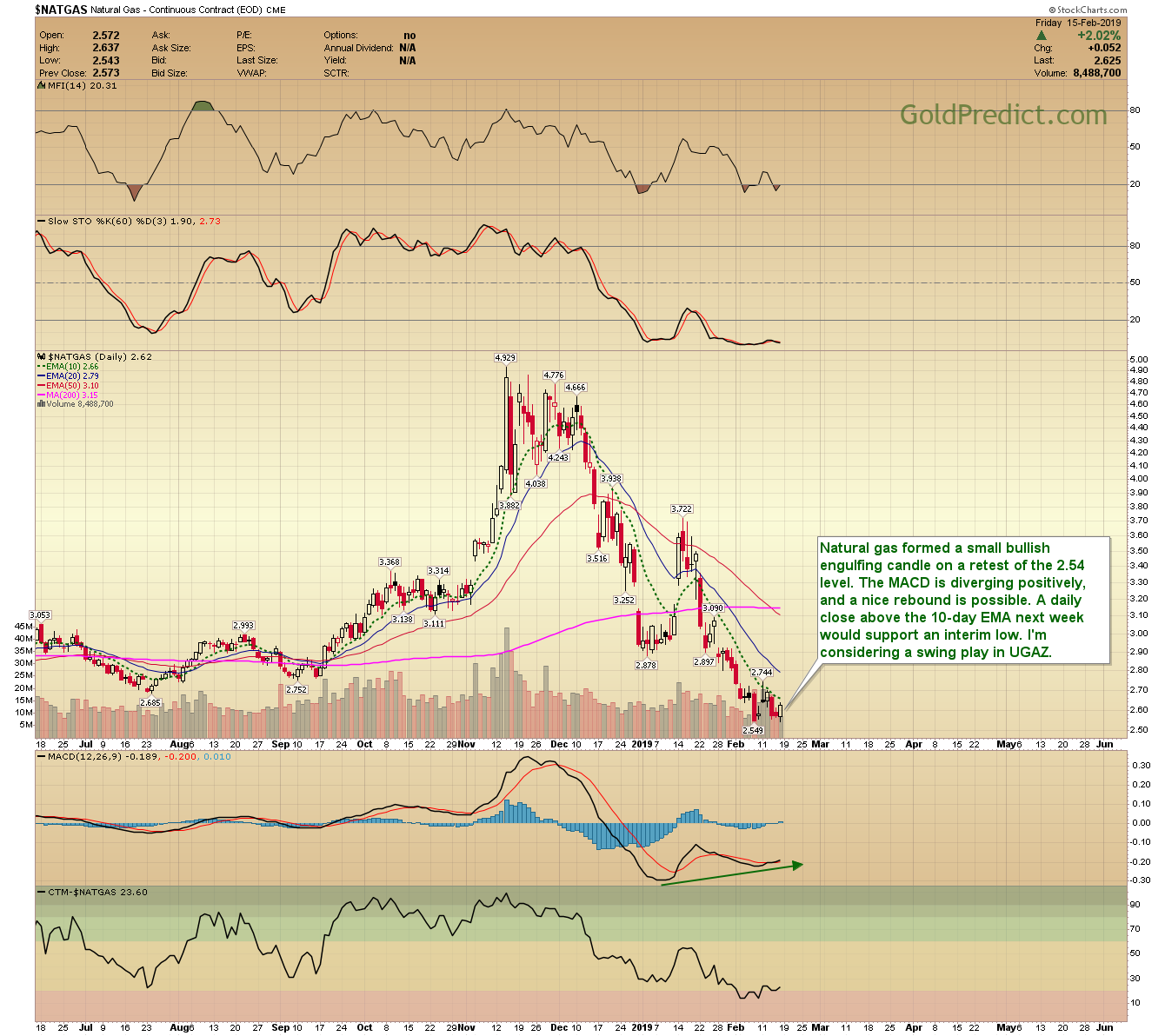 -UGAZ- If NATGAS is putting in an interim low, we could see a nice 20% – 40% upswing in UGAZ. I’ll consider a swing trade and alert members on Tuesday when the market reopens.

Trading is customarily tricky in the latter part of an intermediate gold cycle. If it were easy, then everyone would do it. All-in-all I think the current cycle is on its final leg and we are in the thrashing that precedes a top. Markets operate on sentiment, and significant change occurs when both bullish and bearish sentiment aligns temporarily.

This article was published Posted on February 19, 2019 in Categories Free Updates, Weekend Newsletters