Recession fears are spiking. The 10-year versus 2-year yields reached parity (temporarily inverted) for the first time since 2007. An inverted yield curve almost always precedes a recession. However, it’s usually early – sometimes a year passes before the recession officially commences.

The panic into bonds drove 30-year rates to record lows. The nosedive in yields is way overdone, but that doesn’t mean it’s over – it could last a couple more weeks.

Gold remains buoyant as prices examine resistance surrounding $1525. The odds still favor a top in this area, but we probably won’t see a meaningful correction until Treasury yields begin to stabilize.

Unlike gold, the miners did present evidence of topping during the week – sometimes they lead the metals. Junior miners (GDXJ) closed below two significant gaps confirming an interim, and possibly an intermediate top. A multi-week correction from this level could set the stage for excellent buying opportunities.

-GOLD DAILY- On Tuesday prices formed a massive outside reversal day as gold swung from $1546.10 – $1488.90. These events often signal a trend change, in this case, a top. However, gold remains firm and continue to inch its way higher as long-term Treasury yields plummet. We probably won’t see a meaningful correction in gold until bonds stabilize. 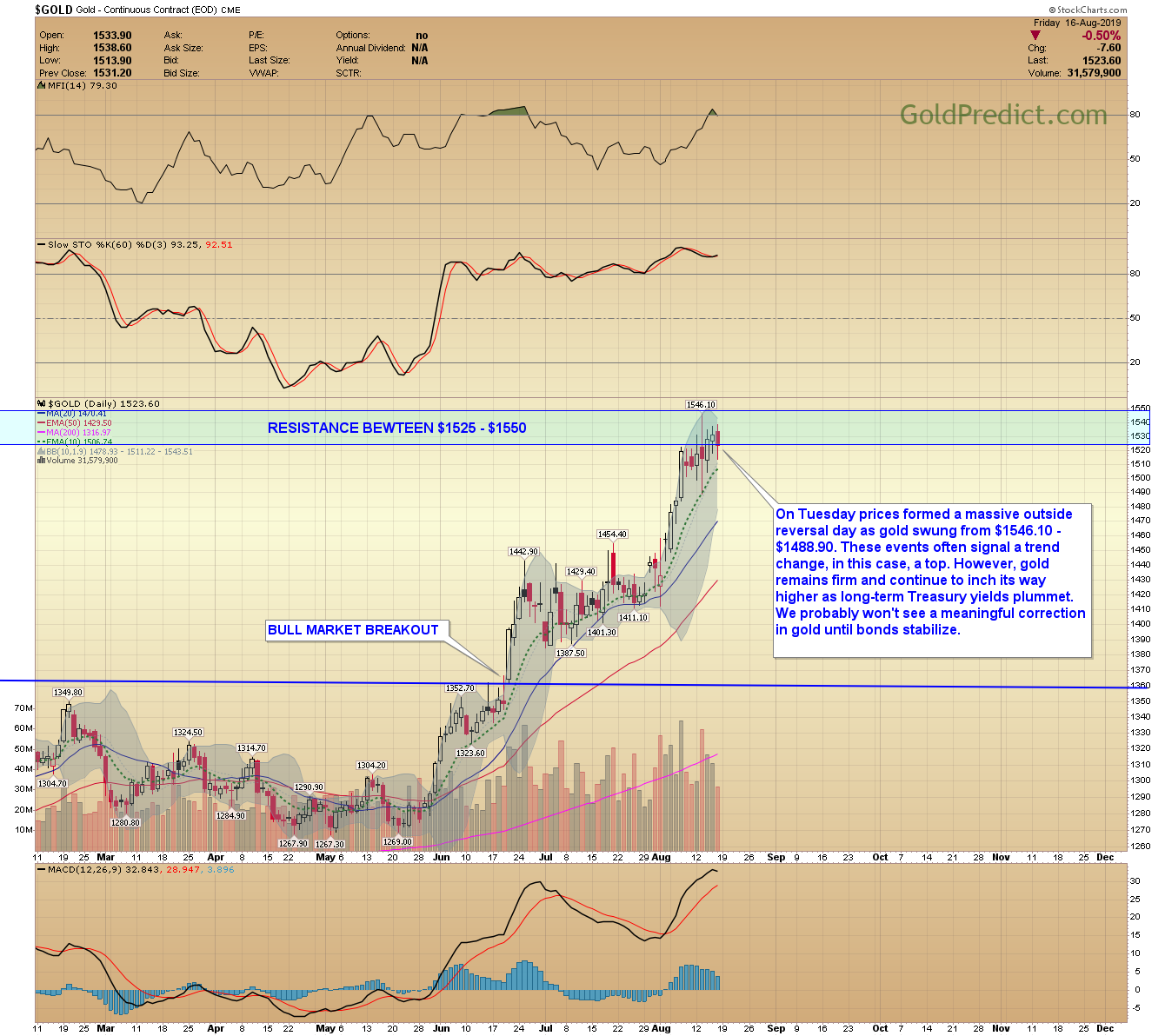 -SILVER BIG PICTURE- Silver has been building a massive base similar to 1997 – 2003. Prices are testing the upper boundary near $17.50. Failing to breakout now would imply a few more months of consolidation followed by a breakout in 2020 (initial target $26.00). Longer-term I’m expecting $100+ silver. I’m incredibly bullish on silver and will continue to add heavily to my core physical position until prices breakout. 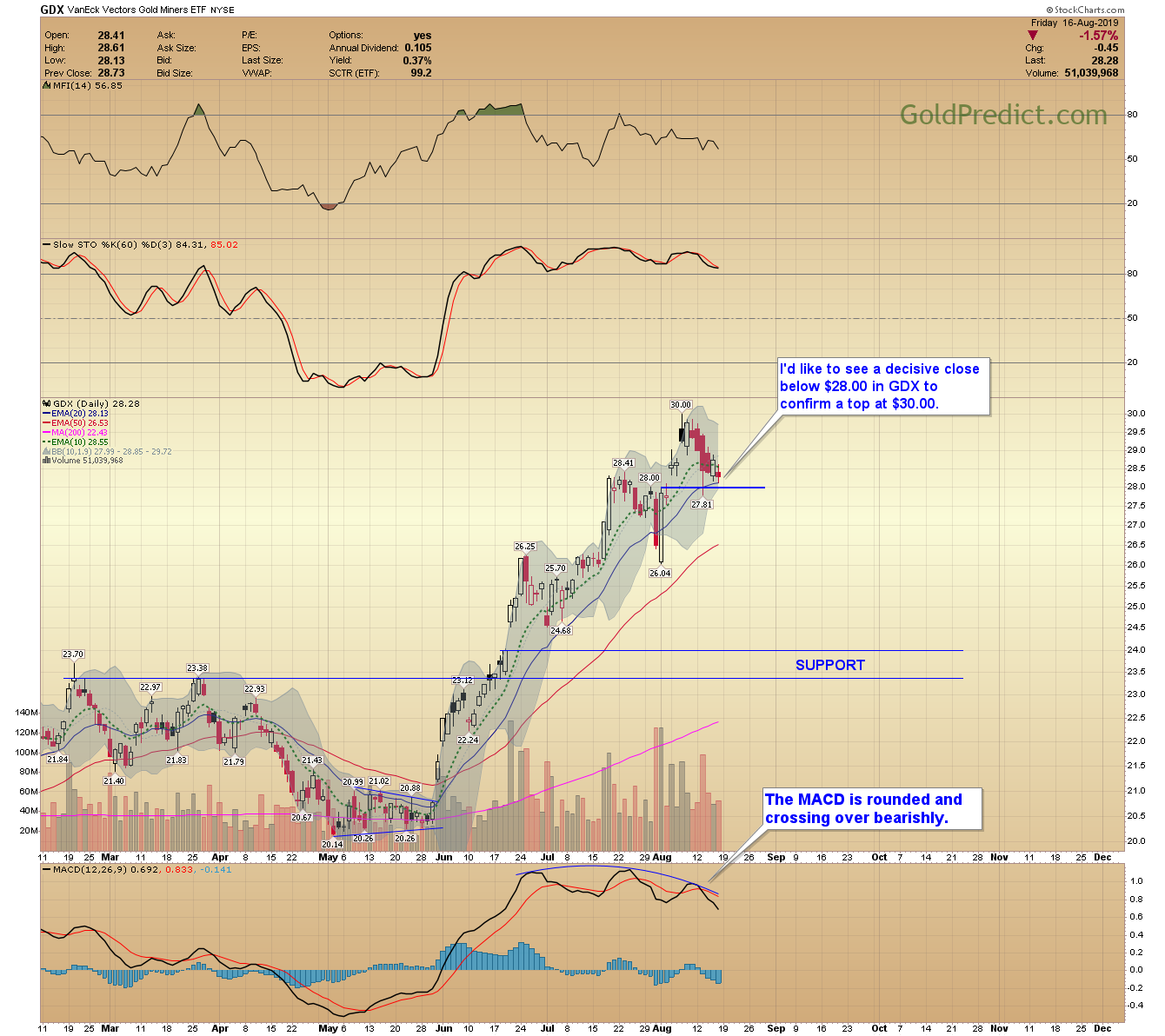 -GDXJ- Juniors finished the week below the early August gaps confirming a top. Closing below the $36.78 pivot would prescribe a decline to the $32.50 gap. 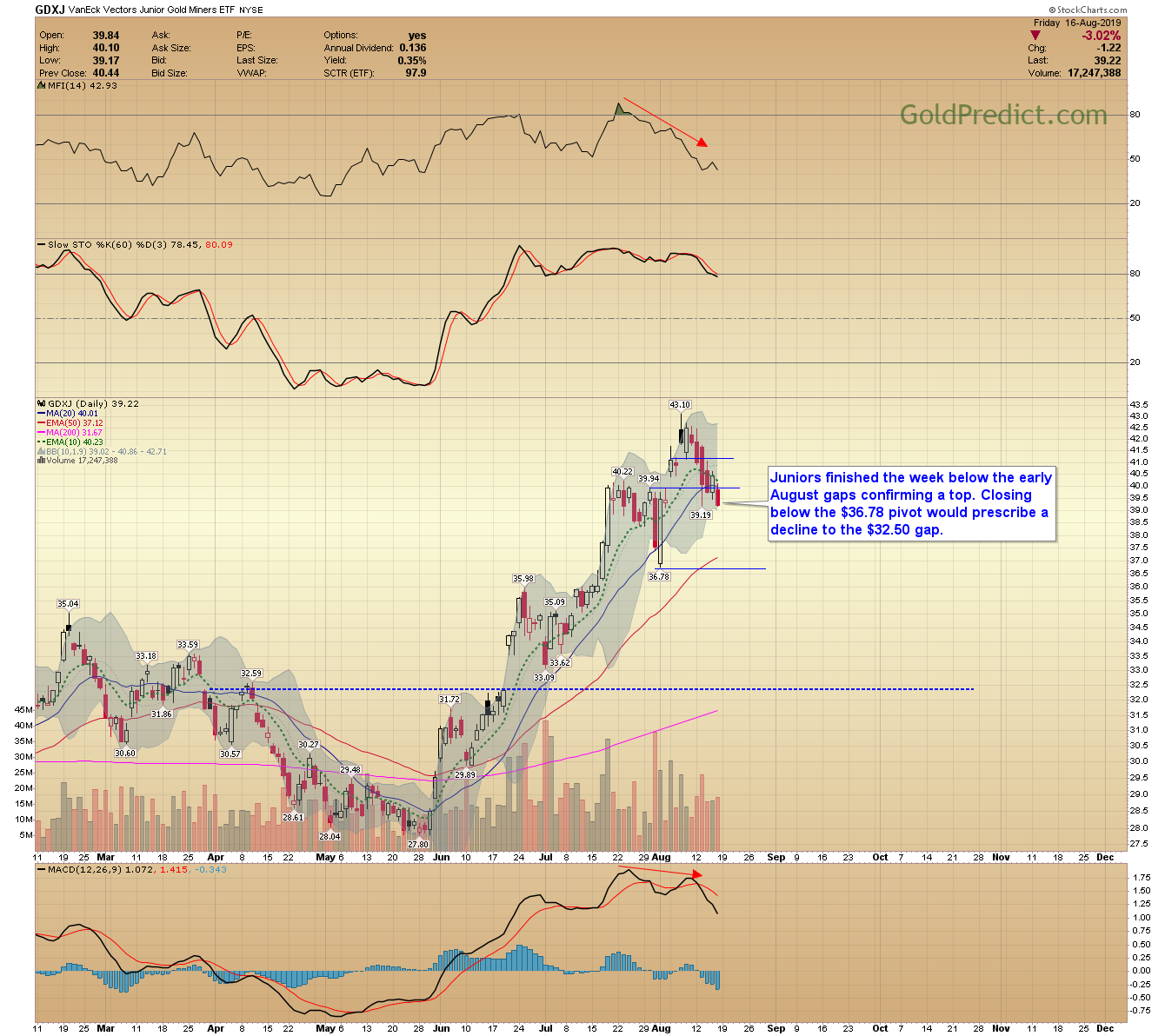 -CDE- Earlier in the week, I mentioned the potential bullish setup brewing in CDE. It looks like prices topped at $5.80 and are correcting. A decline back to the June gap around $3.75 would be the ideal spot for the formation of a right shoulder. If established, that would setup a beautiful entry. A breakout of the head and shoulder pattern above the neckline ($5.80) would recommend an initial $8.00 target with the potential to reach $12.00+. 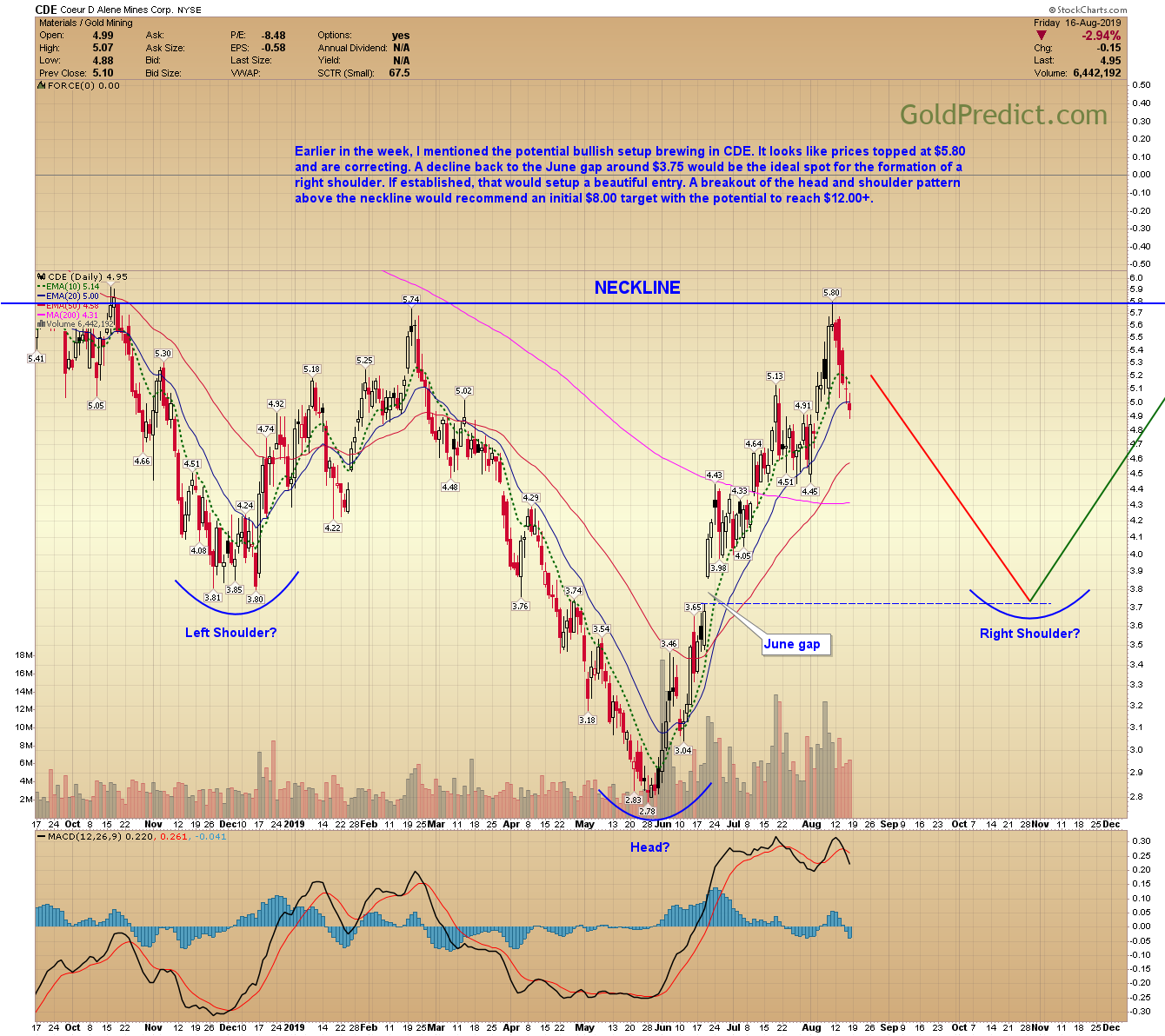 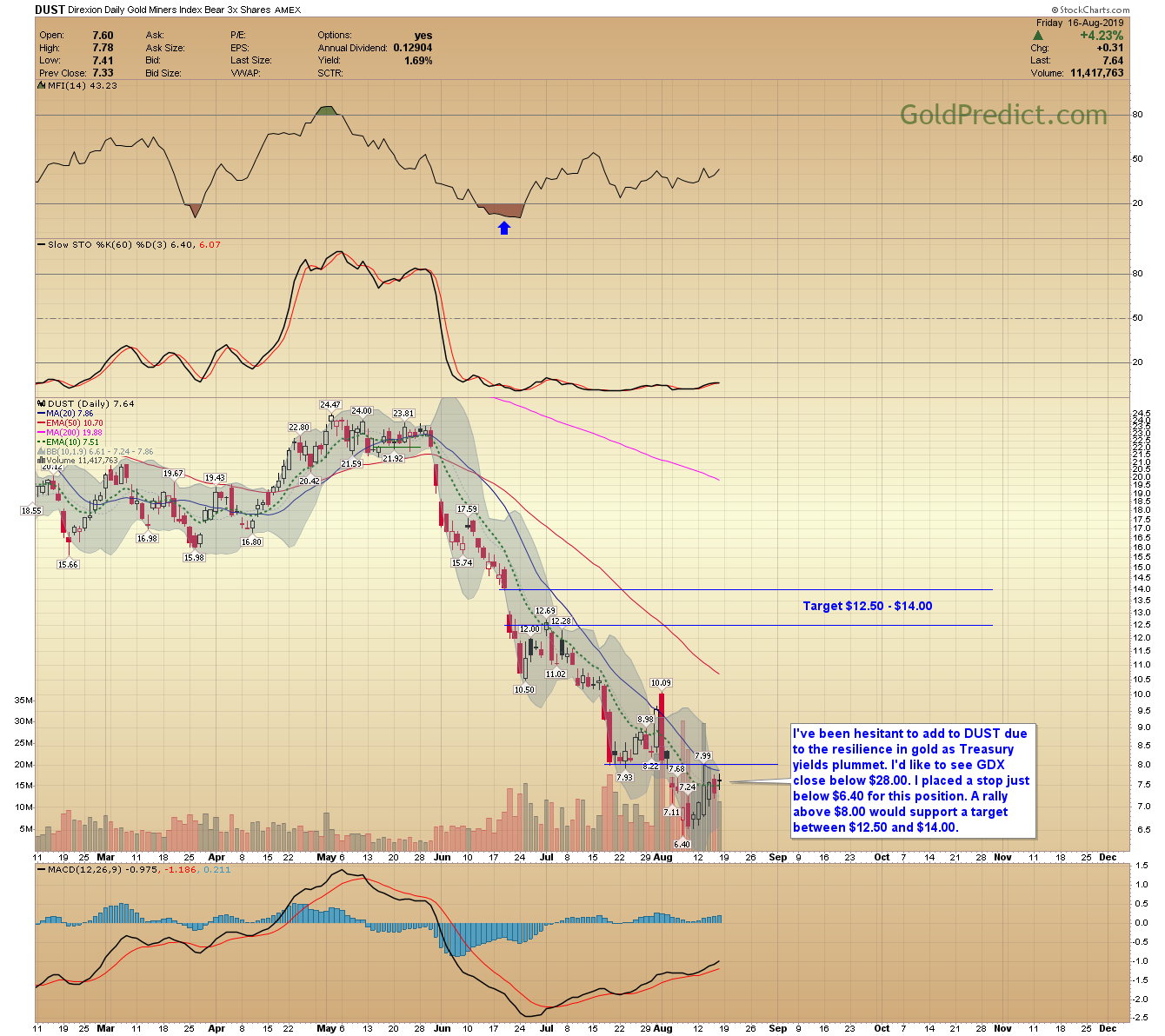 -SPY- Closing below the short-term trendline would imply a decline to the 274 level. It would take an accelerated drop below 270 to support a more profound correction. 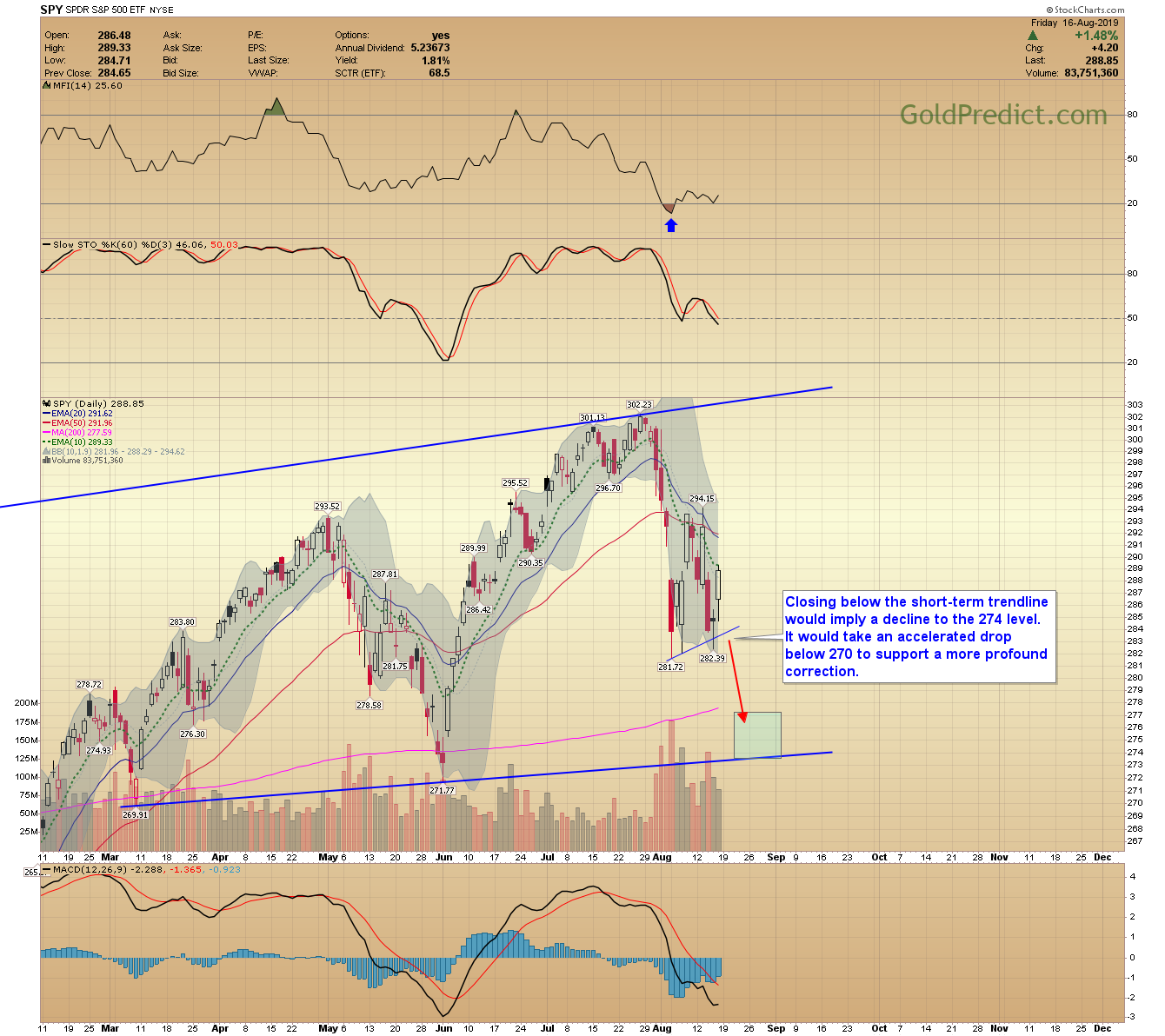 -WTIC- Prices may be carving out a double bottom, closing above $61.00 would establish a bullish trend change. 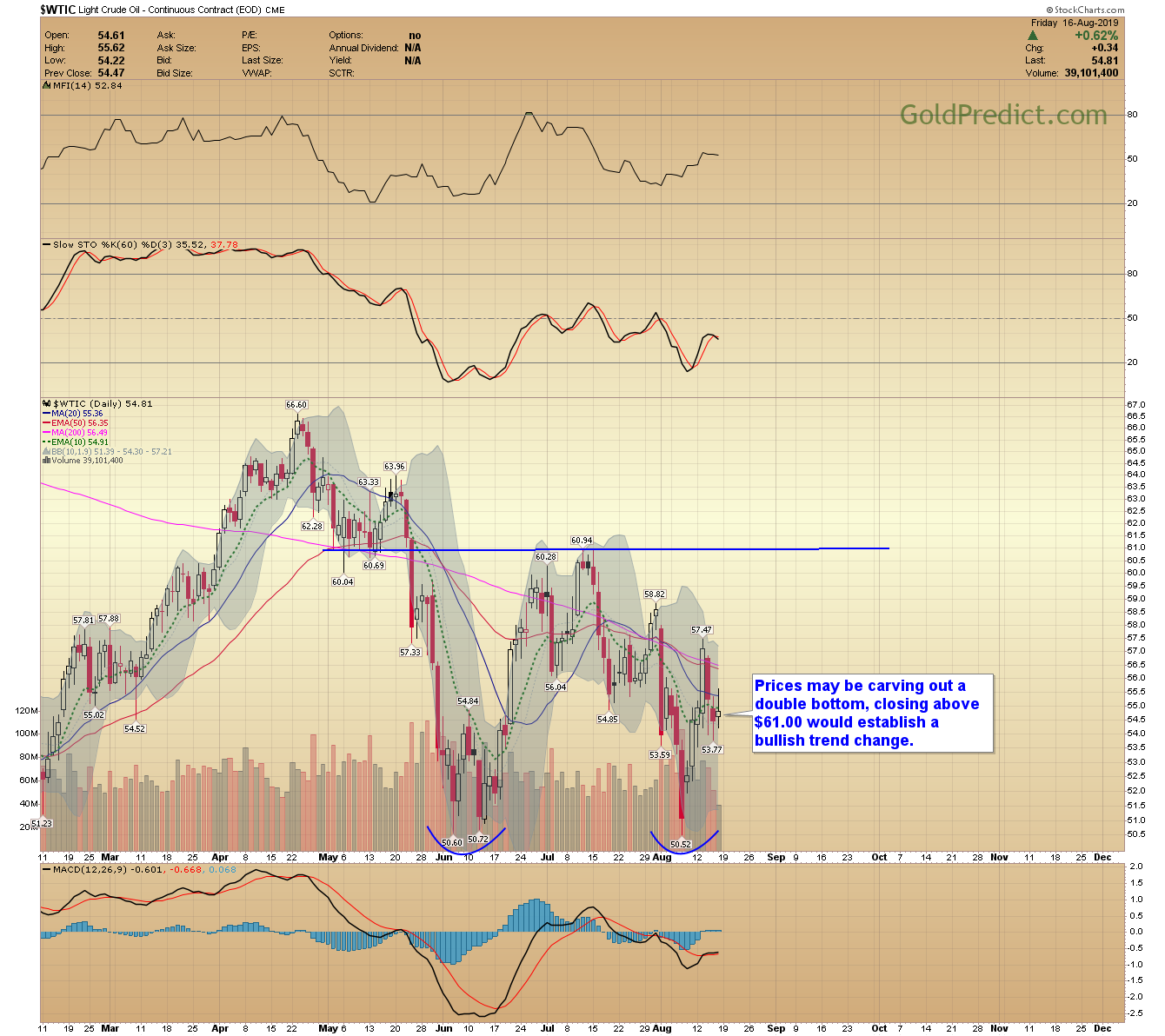 The bull market in precious metals is just getting started, in my opinion. Governments will be forced to monetize debt and depreciate their currencies to keep the system afloat over the next decade. These actions will trigger a global shift from traditional paper assets into hard assets and tangible commodities. Precious metals will benefit greatly.

I’m taking a long-term approach. Each month I’ll allocate a set dollar amount and add to my core position on pullbacks.

This article was published Posted on August 18, 2019 in Categories Free Updates, Weekend Newsletters