In the October 31st report, I mentioned how gold had been forming interim highs/lows in the opening days of a new month. Gold peaked the very next day (November 1st), and the dropped to $1446.20 by November 12th. Well, we are in the timing window for another reversal – what happens over the next 2-3 days will determine much.

First, I’d like to address Trump’s comments about waiting until after the 2020 election to make a deal with China. That remark seems to be the main driver behind gold’s upswing.

If the tariffs remain and Trump waits until after the 2020 elections, there is a near 100% chance the economy will be in recession by the elections, and his chances of getting reelected during a downturn would be next to zero. He must know this. Perhaps he’s using it as a negotiation technique – I don’t know.

Monthly Trend Changes: In the chart below, you’ll notice how gold frequently changes course at the beginning of a month. Not always, but enough to get our attention. 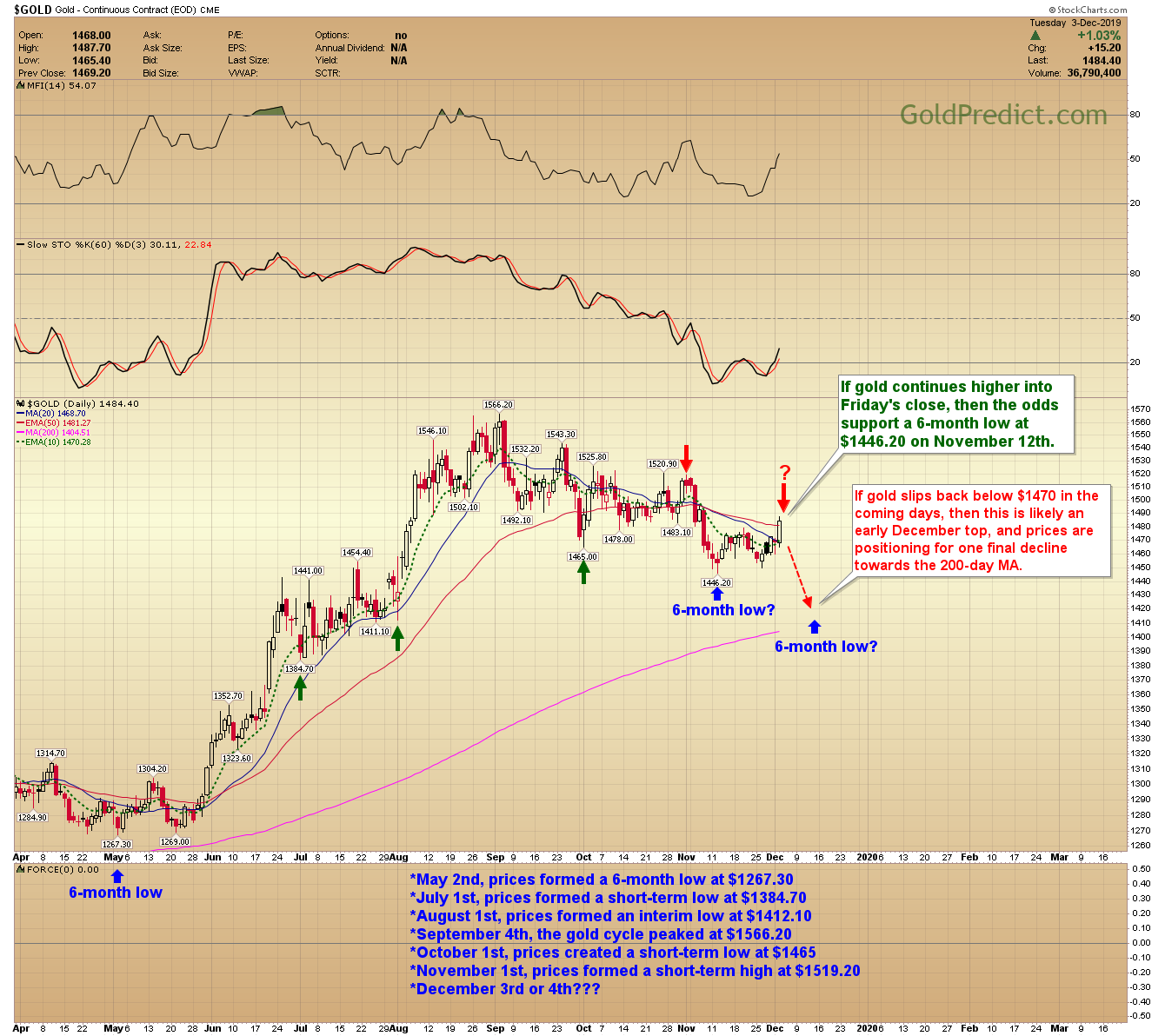 If gold continues higher into Friday’s close, then the odds support a 6-month low at $1446.20 on November 12th.

If gold slips back below $1470 in the coming days, then this is likely an early December top, and prices are positioning for one final decline towards the 200-day MA.

-SILVER- Prices remain within a tight upward sloping trend channel. The potential for a final breakdown remains. Silver would have to close above $17.60 and then above $17.80 to support a bottom at $16.61. As with gold, the next few days are crucial. 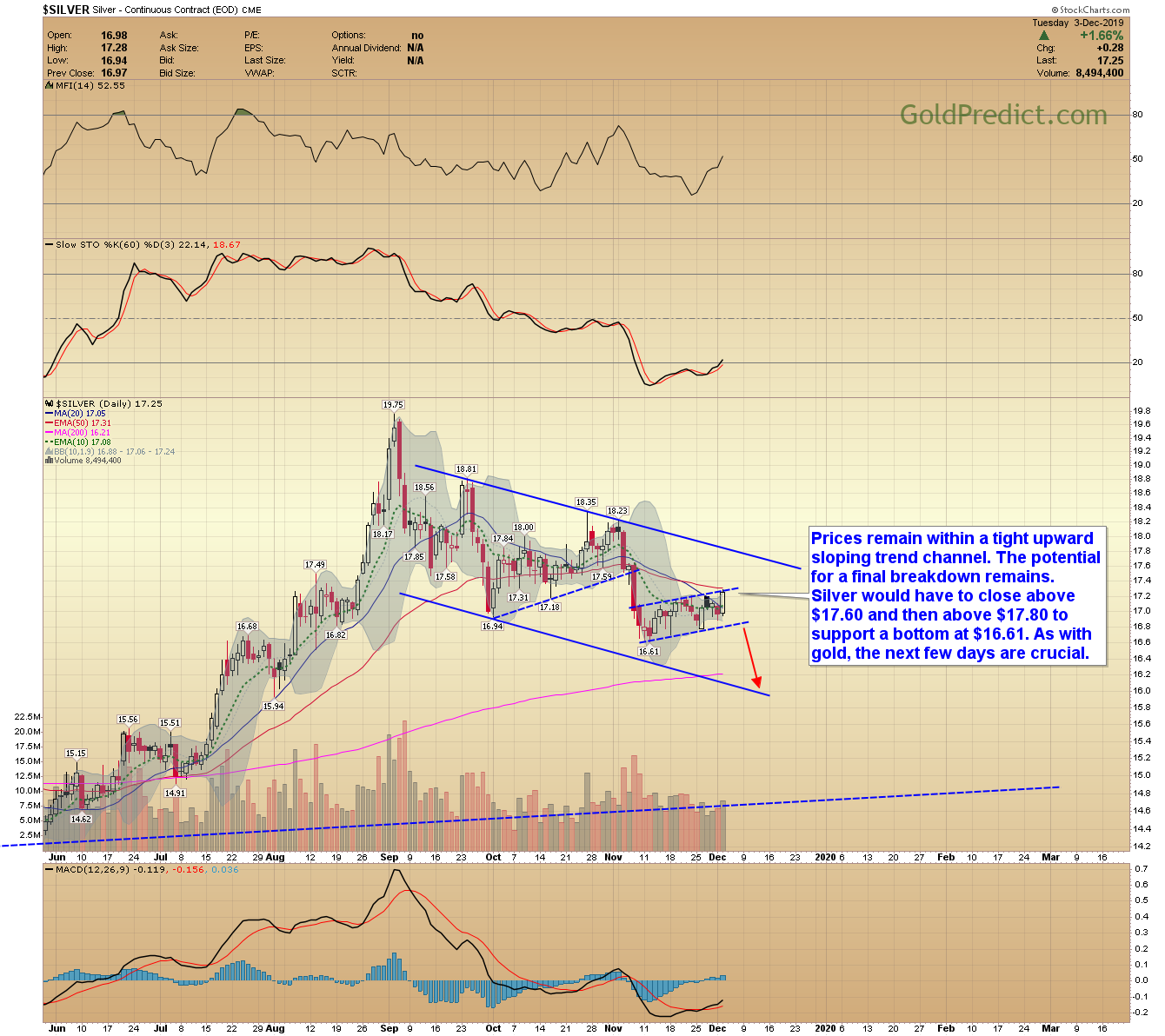 -GDX- Miners gapped above the upper trendline. If prices remain above $27.21 the next few days, then this could be a bullish breakout. Closing below the gap ($27.21) in the next few days would support a top and final breakdown into mid-December. Note – gapping higher again tomorrow would actively recommend a breakout. 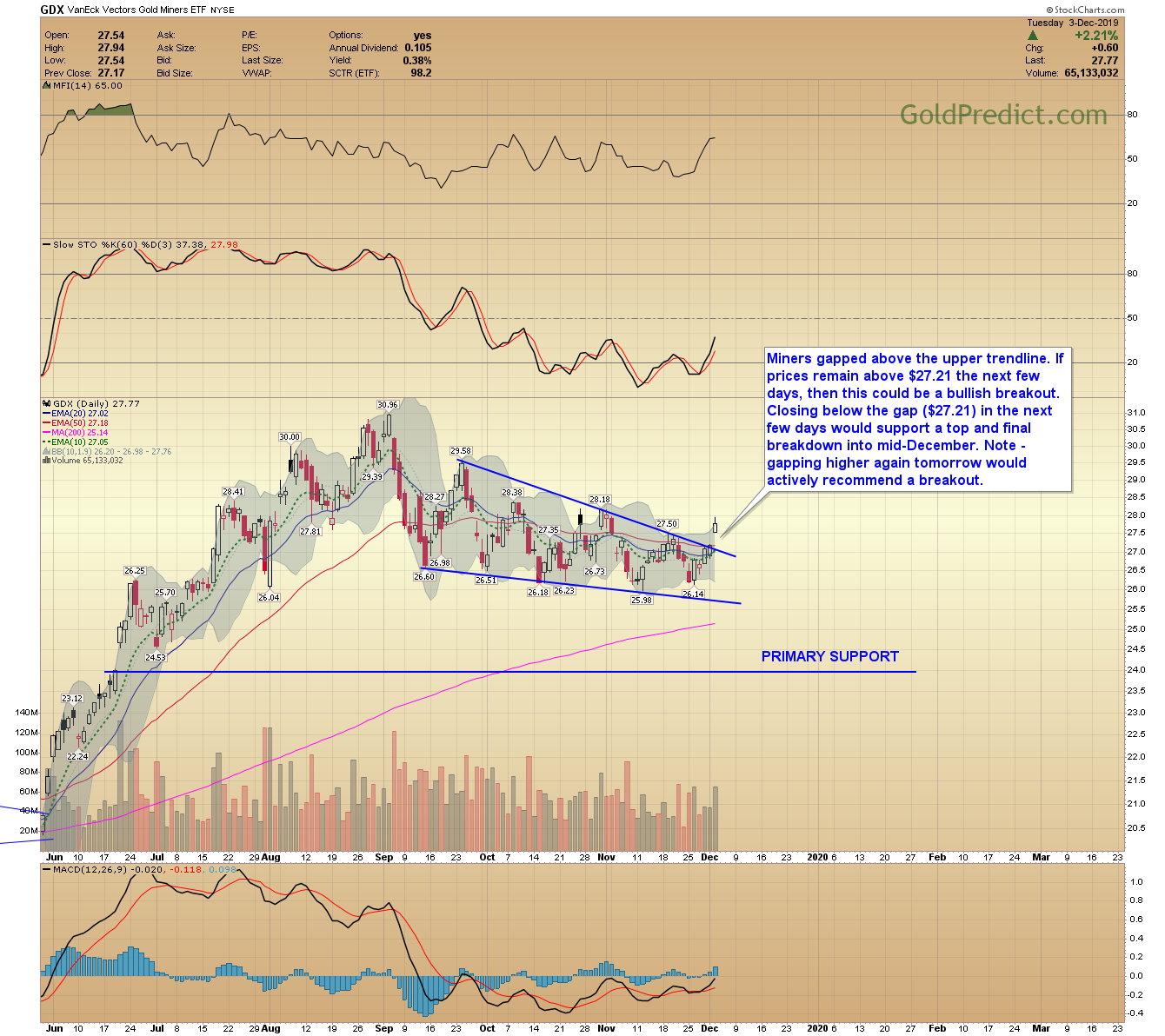 -GDXJ- Juniors gapped higher and above the short-term trendline. If this gap holds the next few days, then we could have a bullish breakout. Closing back below the $38.50 level would support a bearish reversal. 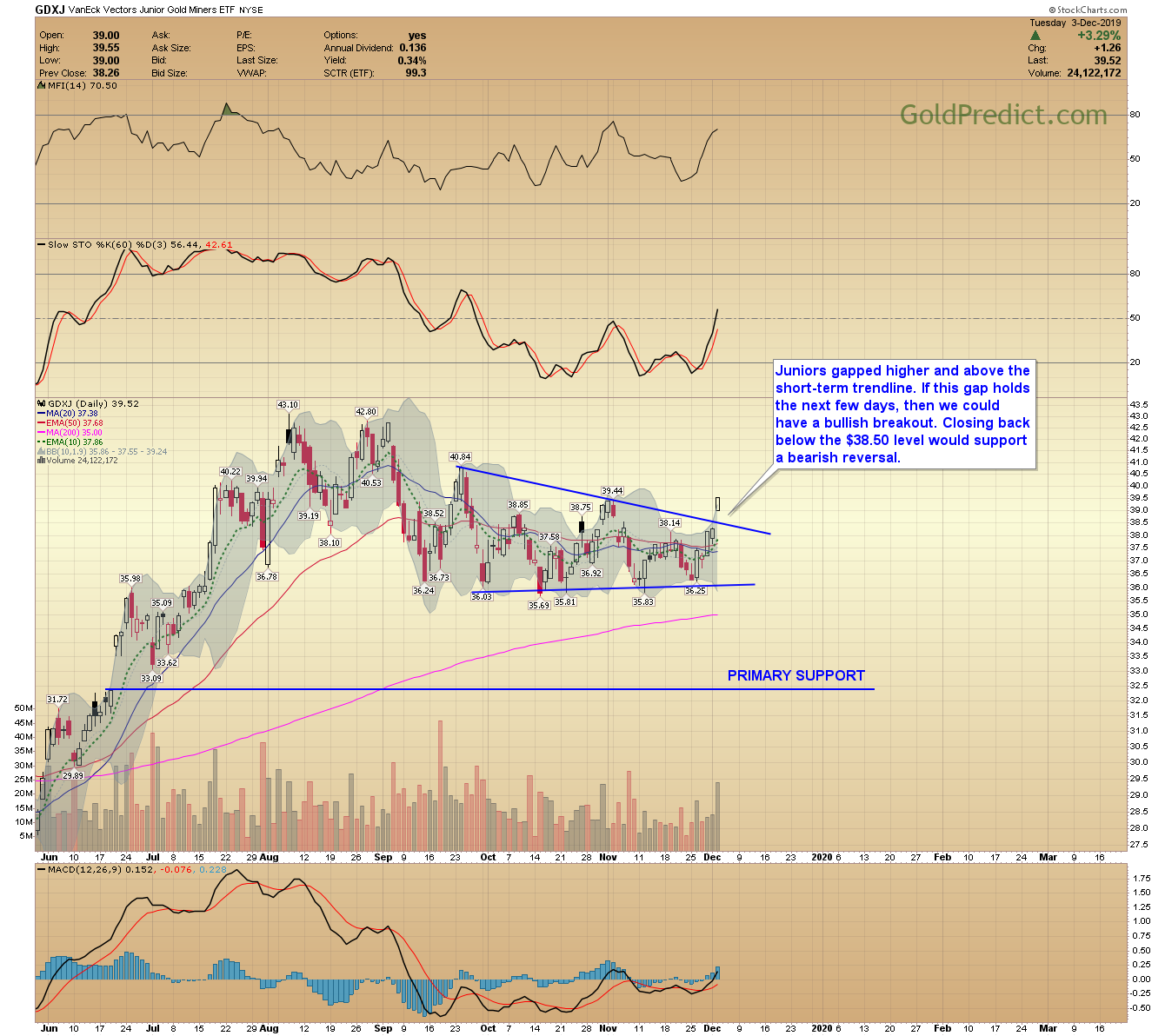 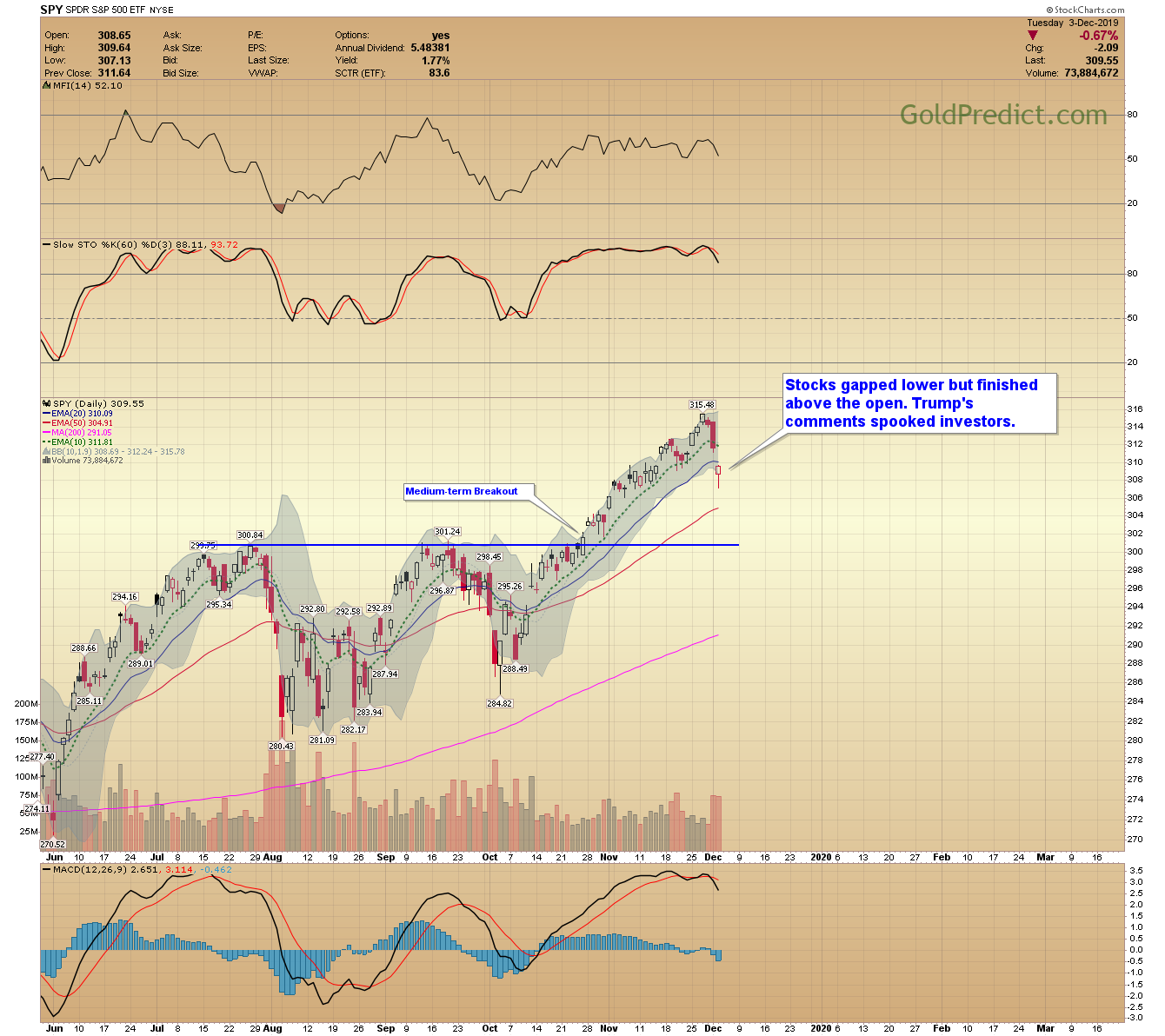 -DOW- The DOW was down over 450-points at one point. Like the SPY, prices finished near or just above the open. 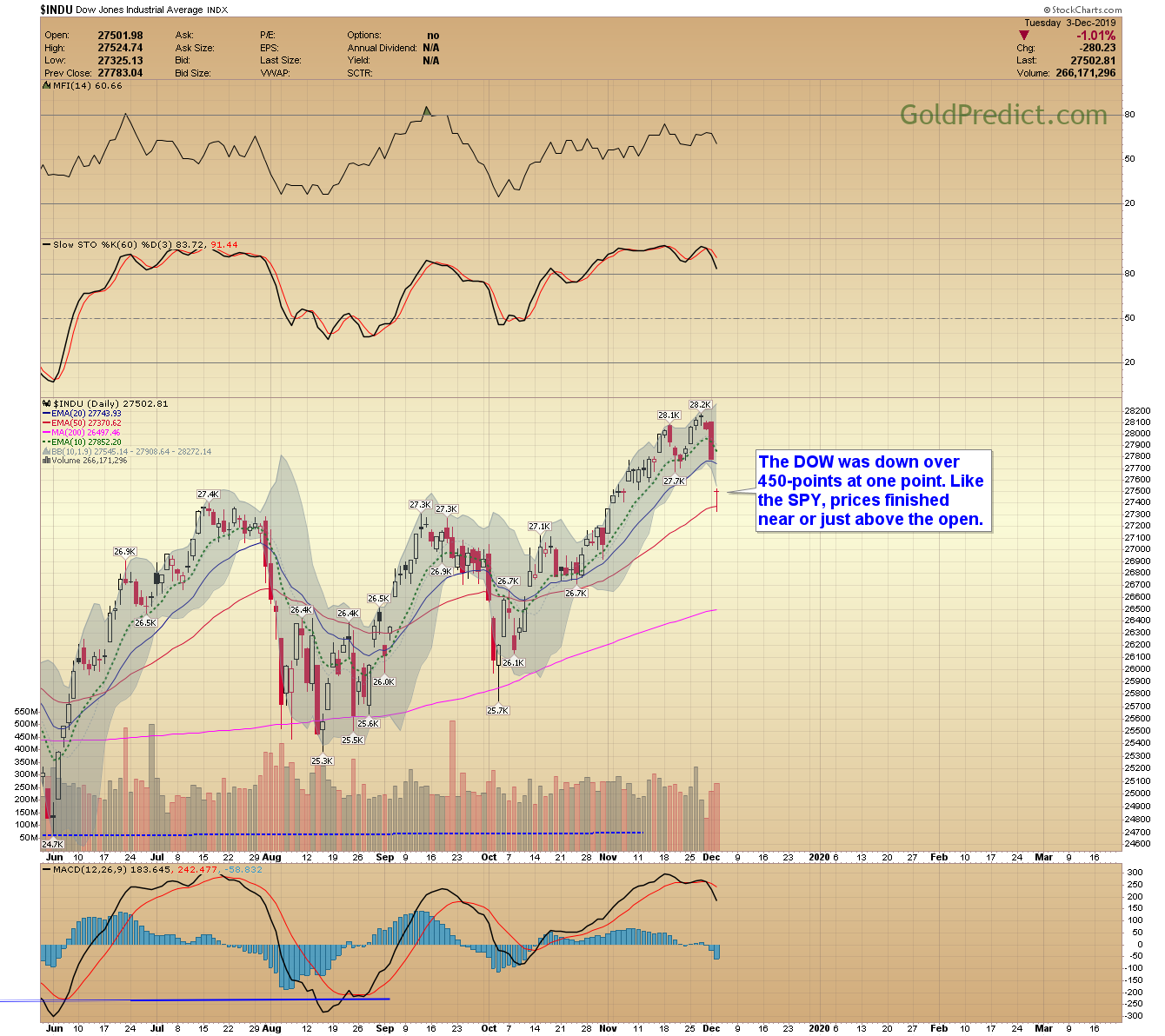 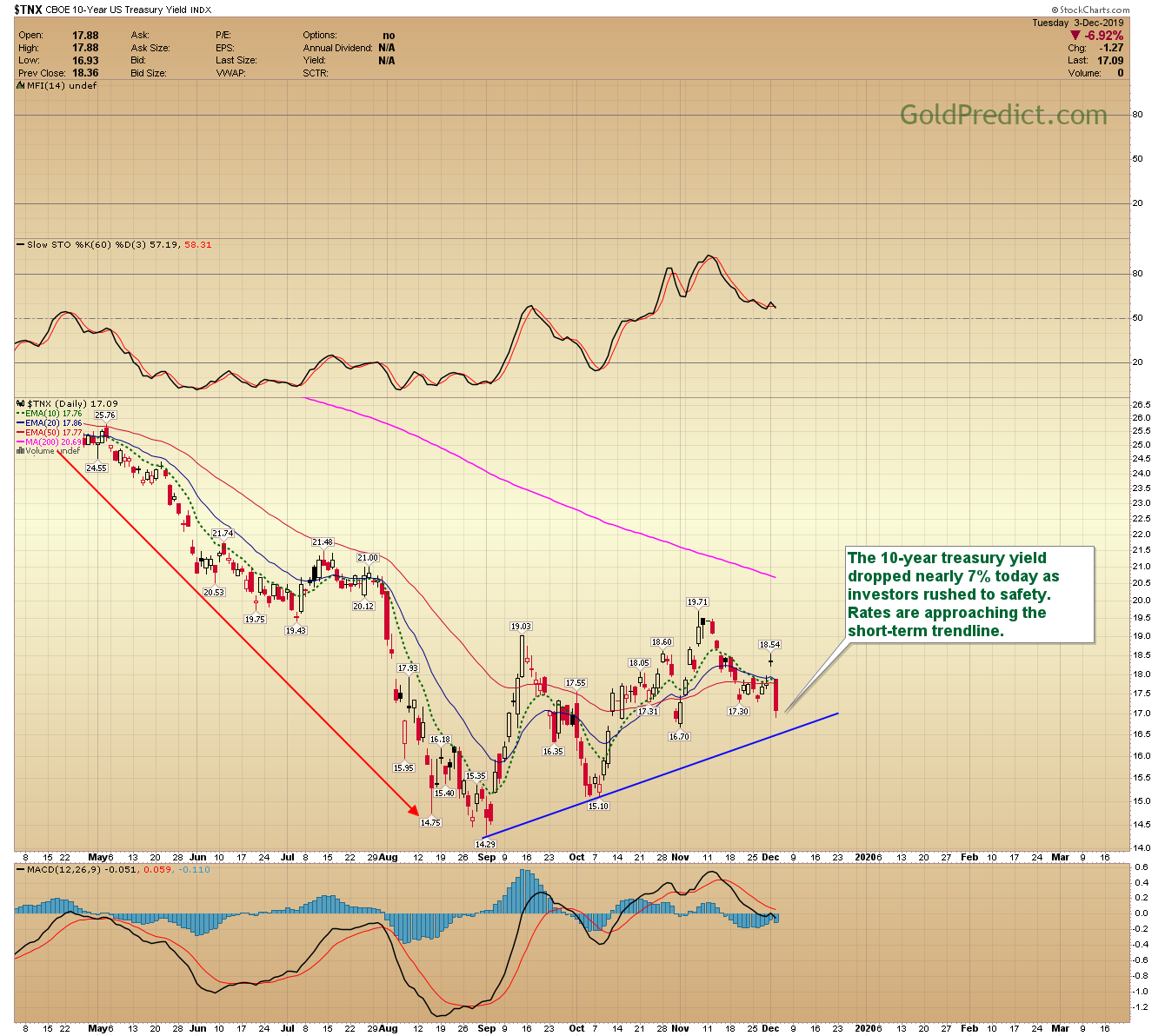 As I said, the next few days are crucial. If the market believes Trump about China and the next rounds of tariffs go through on December 15th, then gold will likely continue higher.

If today was just a kneejerk reaction, and Trump walks back his statement, then gold could be topping and break lower one last time before bottoming.

The Gold Cycle Indicator finished at 110 with today’s rise. 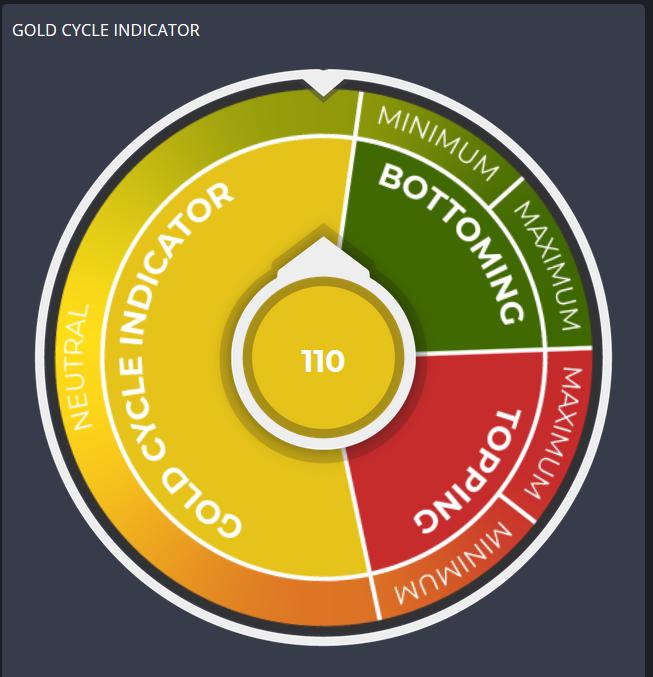 This article was published Posted on December 3, 2019 in Categories Free Updates