The first half of the weekend report (below) will cover the usual content. The second half will examine US retail gold sales; I think you’ll find it interesting.

Get ready for an exciting week. There’s zero chance the Fed will change rates in December. The December 15th tariff deadline is probably the more pressing issue.

With Friday’s reversal lower in gold, prices are once again set up to break lower. If gold breaks below $1450, we could see a bottom as soon as next week. Silver already broke to fresh lows and is approaching its 200-day MA.

COT UPDATE: Commercials increased their net-short position from 305,467 to 322,787. These numbers are higher than I like, but that doesn’t mean gold can’t bottom.

Gold Cycle Indicator: The GCI finished the week at 97 and in minimum bottoming territory. Again, his doesn’t guarantee a bottom – it simply means gold has met the minimum requirements for a 6-month low. 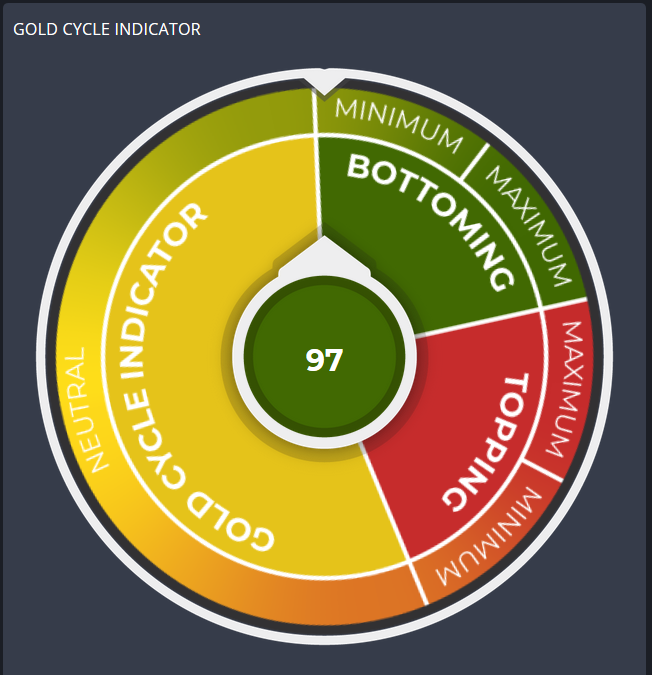 -GOLD- Friday’s breakdown and close below $1470 supports a short-term top on December 4th at $1489.90. The setup for one more decline towards the target box remains. If prices do break below $1450, we could get a bottom as soon next week. 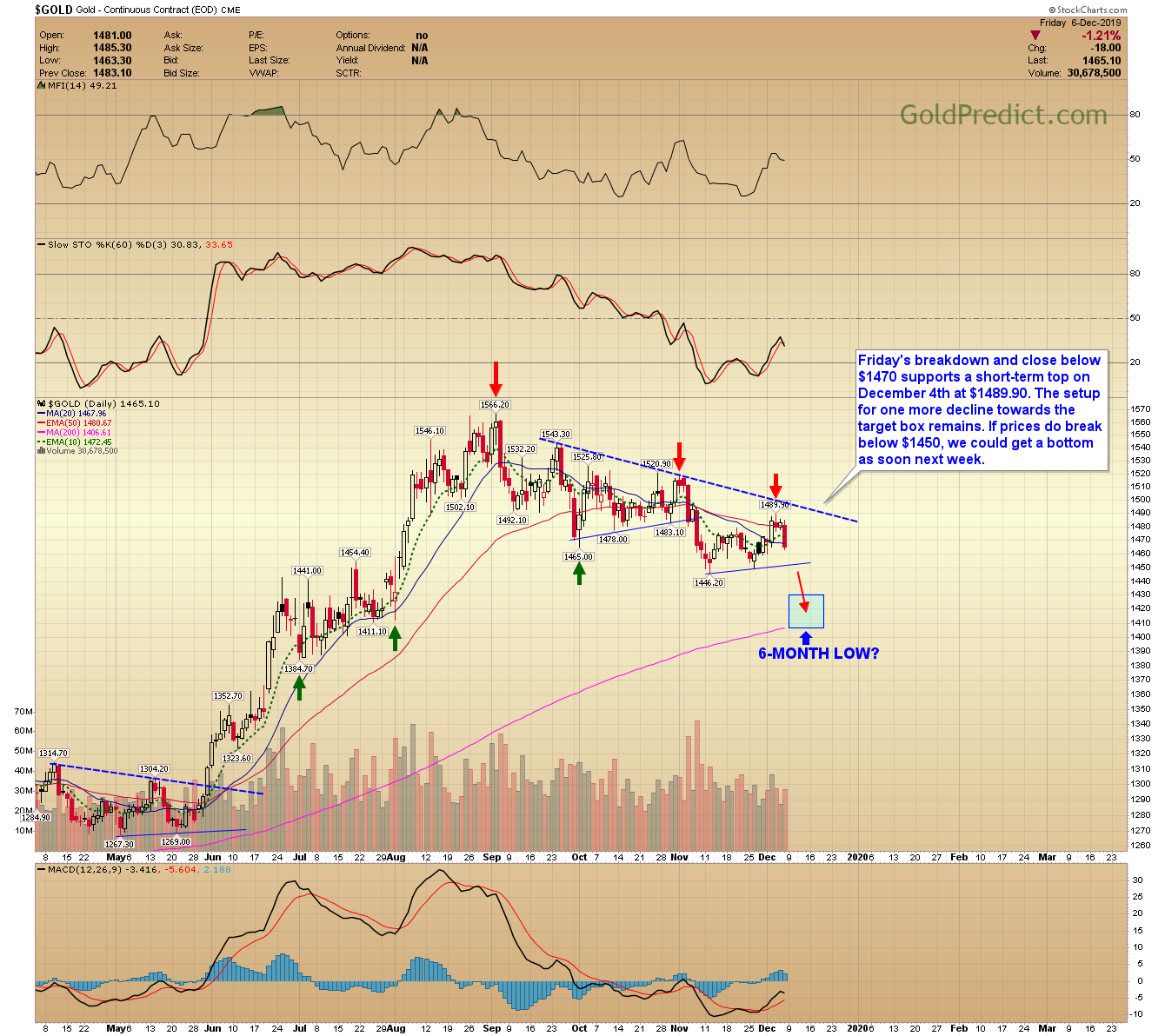 -SILVER- Silver broke to fresh lows on Friday and prices are approaching the 200-day MA. We could get a bottom as soon as next week. 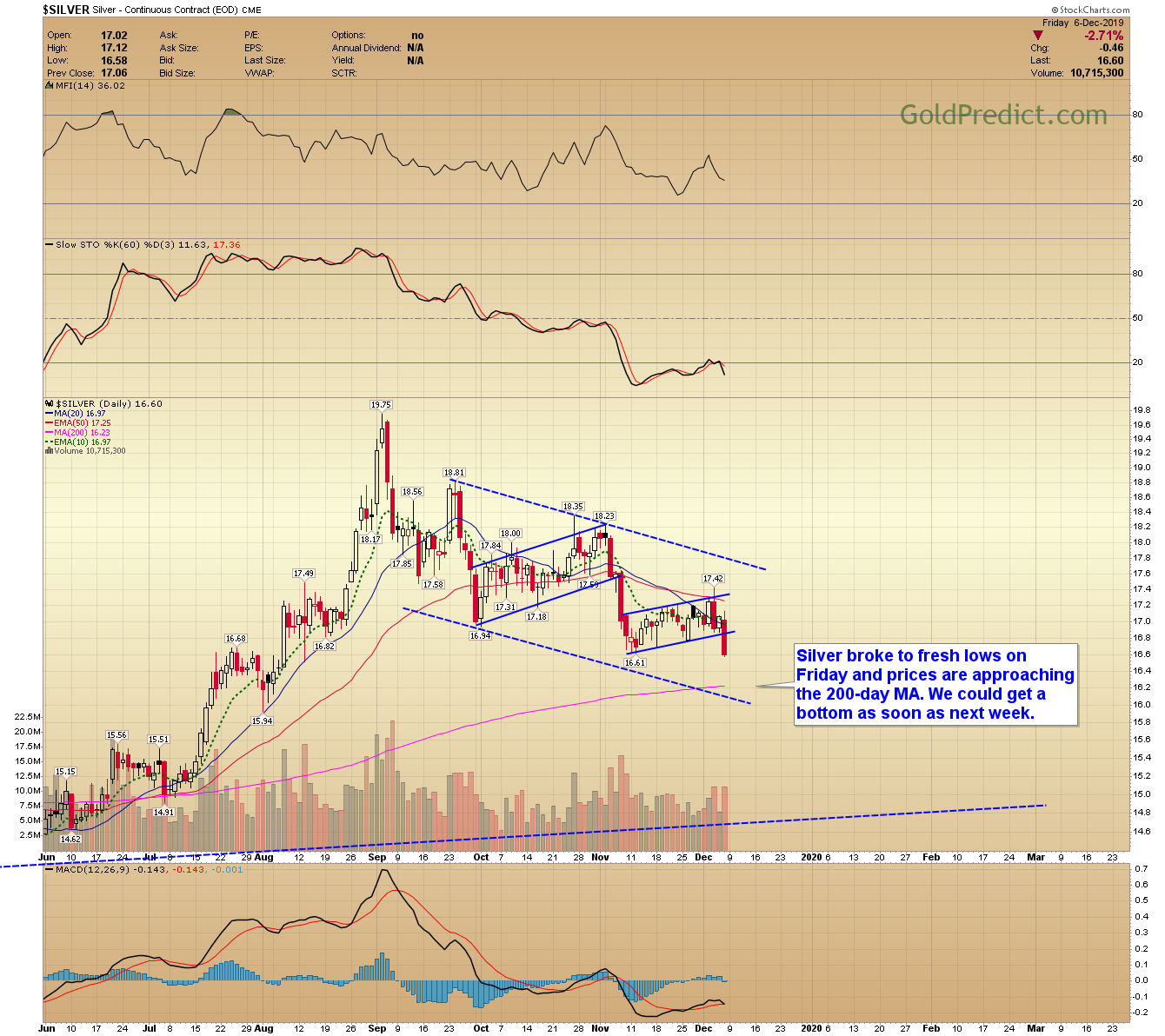 -PLATINUM- Prices have been correcting since early September. They continue above the breakout trendline as well as the 200-day MA. As long as $860 – $875 holds, I see the potential for a strong rally once gold bottoms. Longer-term, I believe platinum will once again surpass the price of gold. 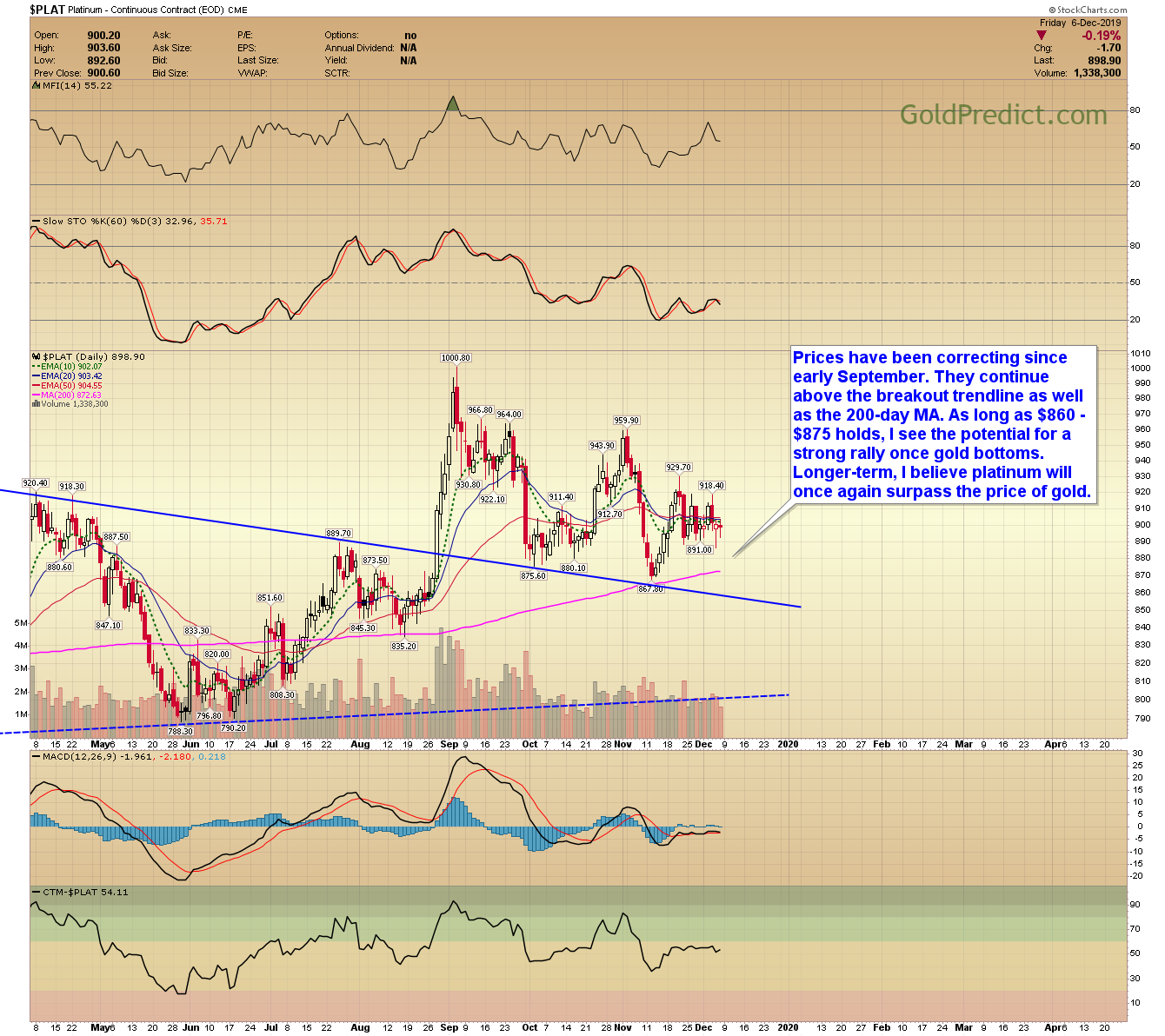 -XAU CYCLE- A while back, I mentioned the 42 to 46-day cycle in the XAU. The previous cycle bottomed in early October. But then prices made a marginal low, reversed, and then rallied into the recent high (46-days). Frankly, I’m a bit confused – not sure what it means just yet. I have to see how prices react over the next week or two. But in the meantime, I believe we have (at least) a short-term top. 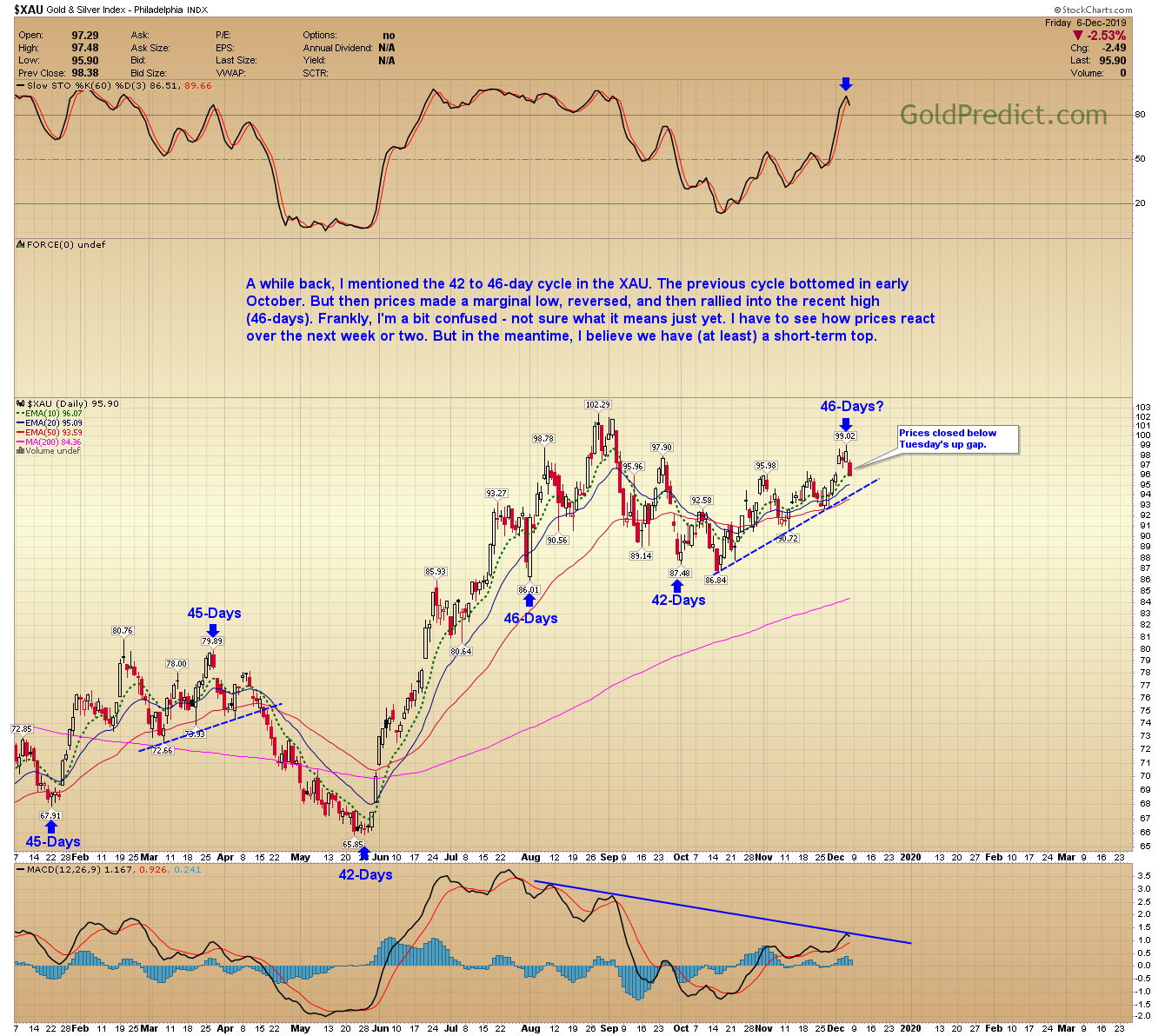 -GDX- Miners closed below Tuesday’s up gap and confirmed a short-term top. There’s no discernable pattern as prices remain more or less rangebound. Prices could dip to new lows next week, but they may not. If they do, I’ll look for support around the 200-day MA. 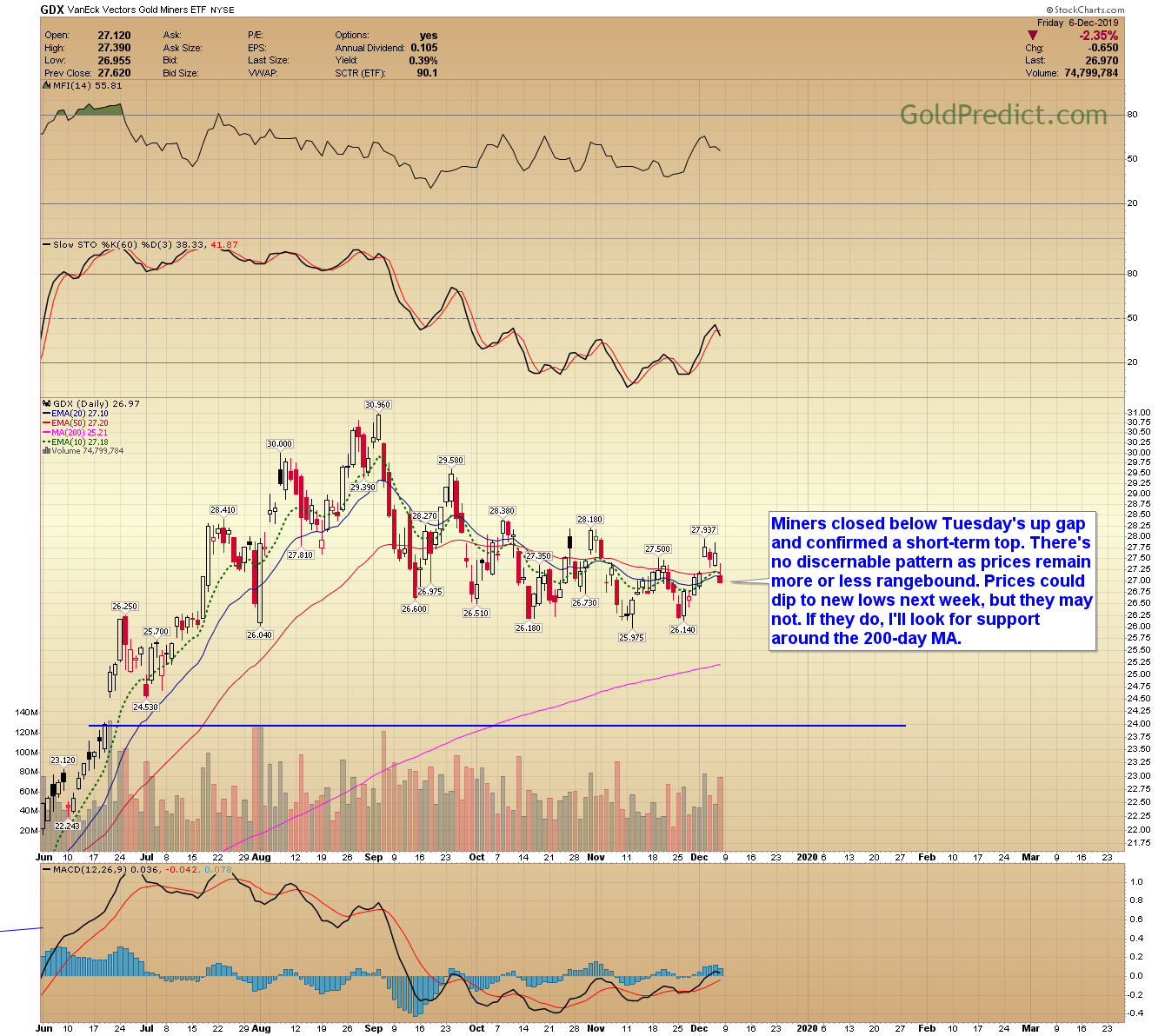 -GDXJ- We saw a similar setup at the beginning of November. Prices gapped higher, formed a small 3-day island top, and then broke lower. Initial support remains at $36.00. 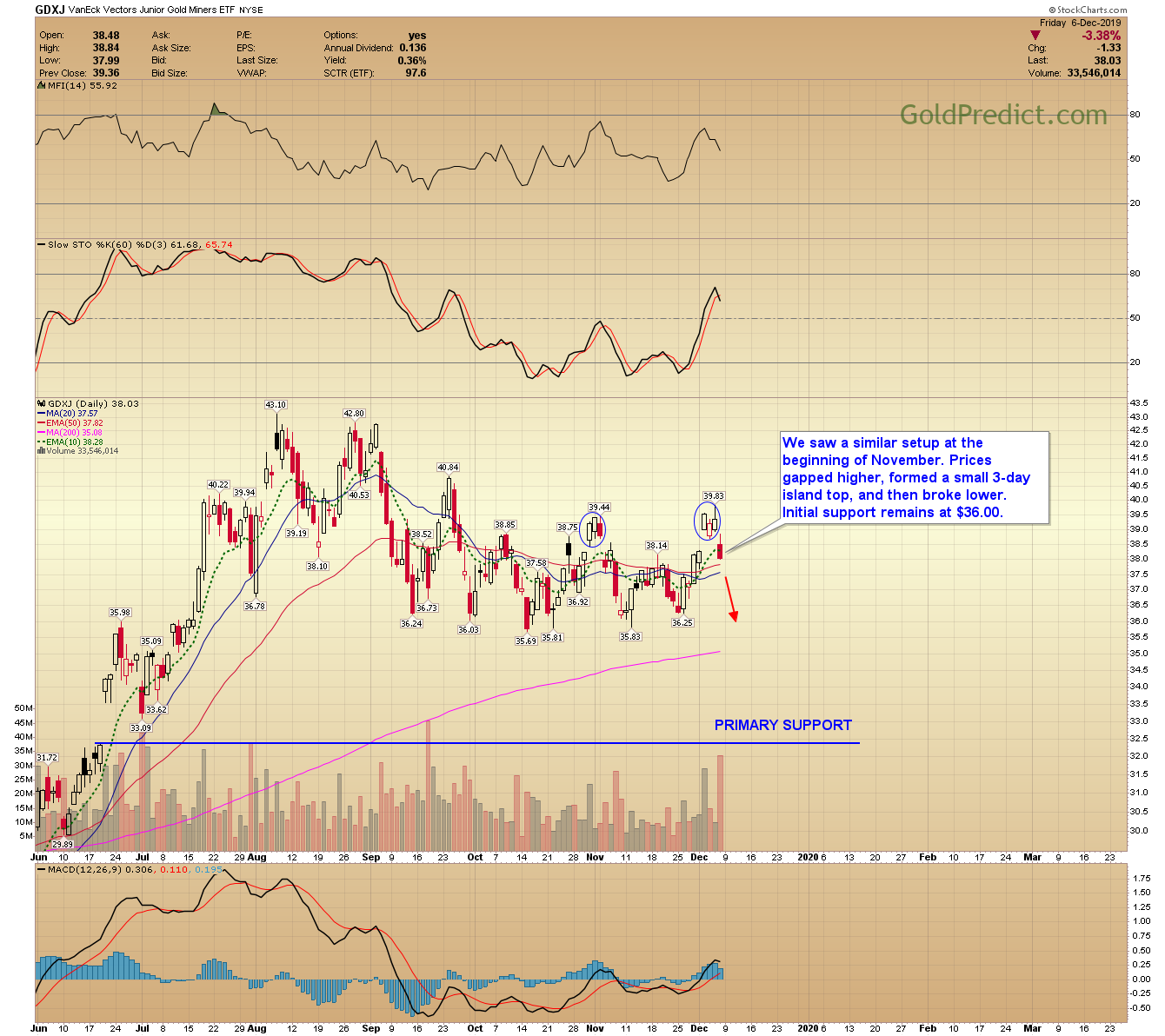 -SPY- It’s not unusual for stocks to rise into a Fed announcement. I think the bigger question now concerns the December 15th tariff deadline. 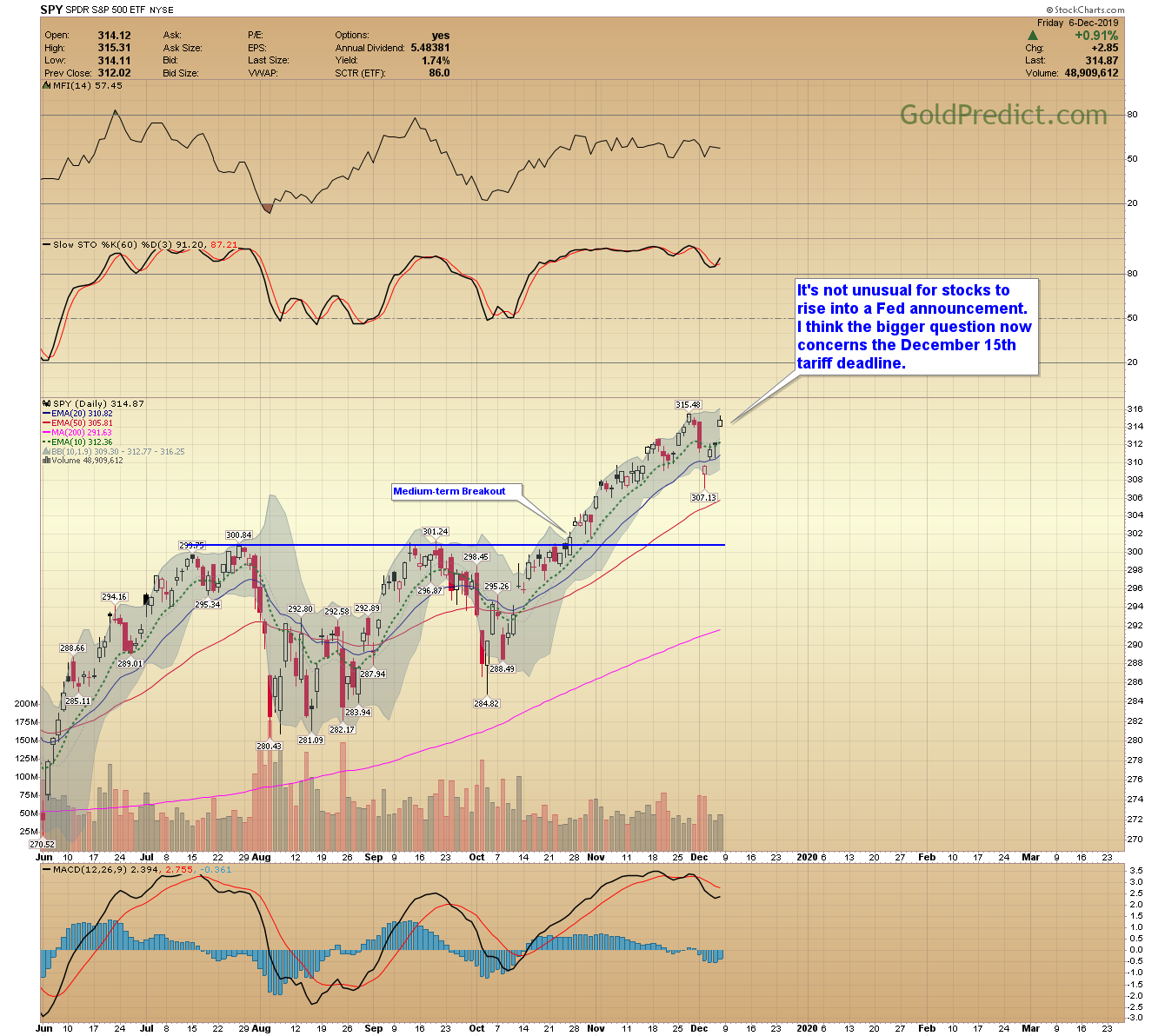 Premium members can expect multiple updates throughout the week. Remember, sometimes the initial Fed reaction is reversed a day or two later.

This article was published Posted on December 8, 2019 in Categories Free Updates, Weekend Newsletters