Gold spiked to $1613.30 over geopolitical concerns before reversing on Wednesday. It looks like the trend is finally taking a breather.

INTERMEDIATE TREND: We are about 2-months into the current 6-month cycle. The trend should remain higher into February and likely March before peaking. Depending on when/where prices peak, I don’t expect the next 6-month low until May 2020.

From what I see, the average investor has no idea gold is in a new bull market. I sat down to advise a friend just last week, and he thought prices were still around $1200. Most people aren’t paying attention, and that tells me we are still in the early innings.

The Gold Cycle Indicator finished the week at 212. 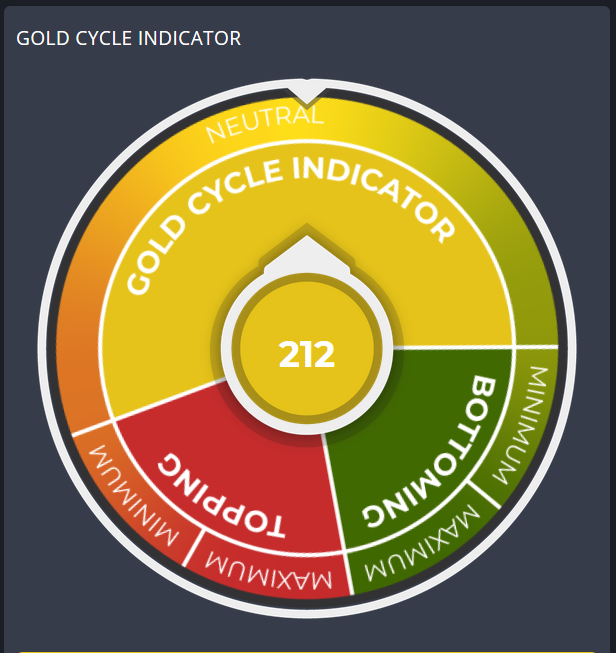 -US DOLLAR- This is the most time the dollar has spent below the 200-day MA since early 2018. Prices would have to close progressively above 97.40 to prevent a more significant breakdown. 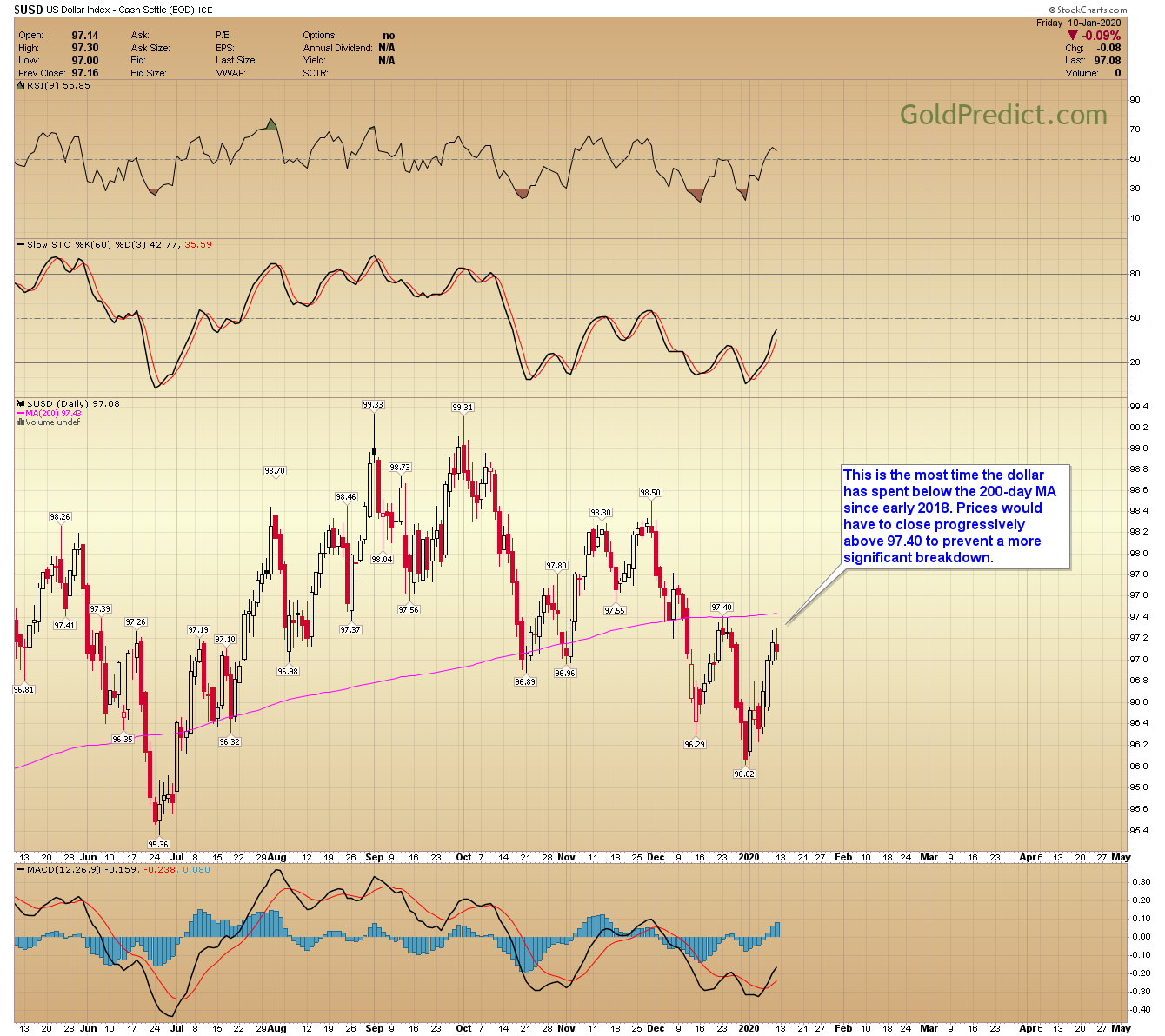 10-YEAR YIELDS: Yields crashed from 3.24% to 1.42% in just under a year. I’ve been trying to figure out if the September 2019 low was a multi-year bottom or an interim low. Currently, I’m leaning towards a temporary low as the subsequent price action favors consolidation and not a proper uptrend. Breaking below the lower trendline would bolster this outlook and increase the potential for another decline in yields. 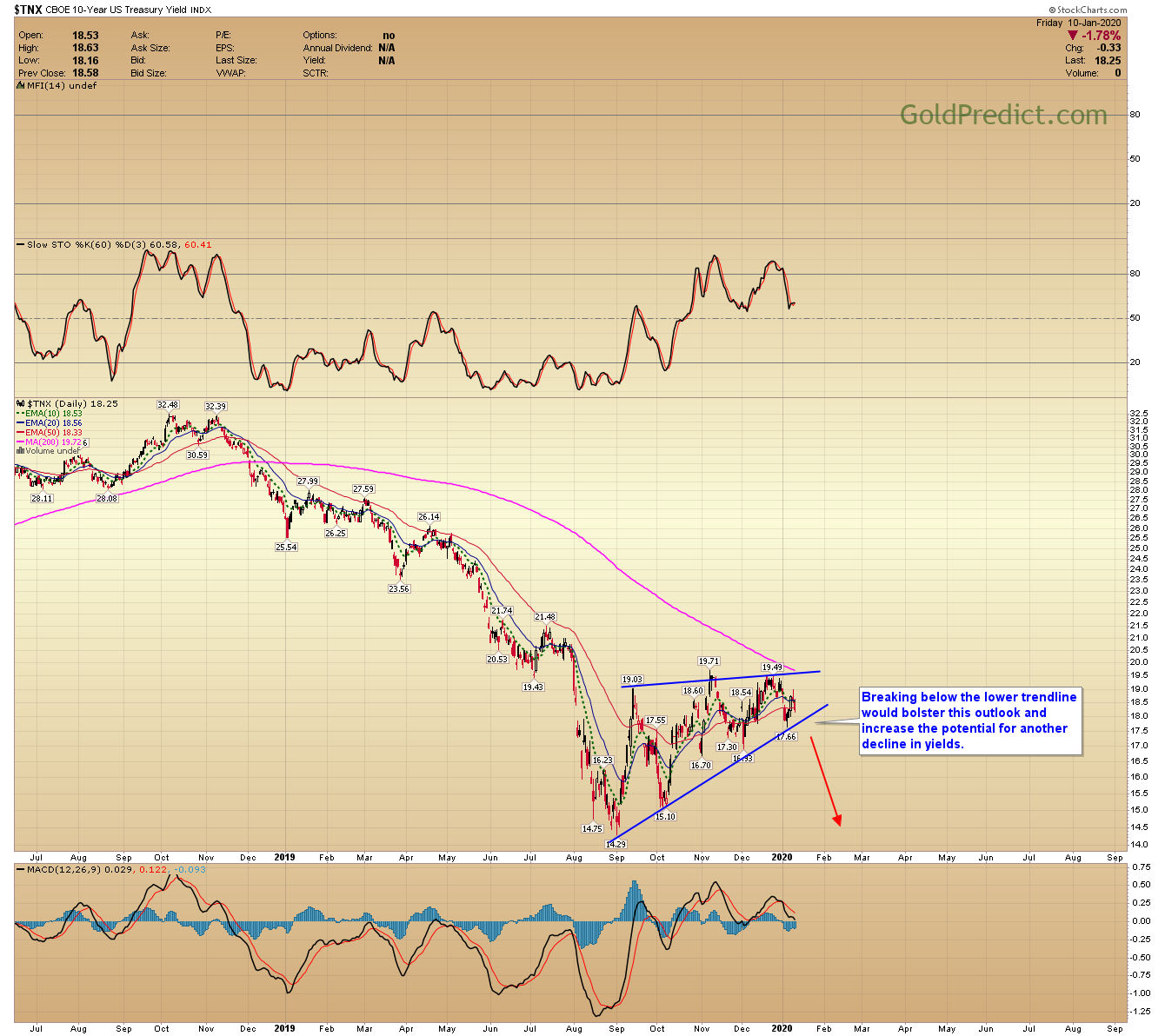 -GOLD- Geopolitical issues increased volatility, and gold spiked to $1613.30 by Wednesday. The trend was due for a breather and potential mid-cycle correction. Prices fell and found support at the 10-day EMA on Thursday and again on Friday – implying the pullback may already be over. Gold futures would have to close below $1540 to establish a more profound mid-cycle correction that would likely go on for about a week before prices turn back higher. 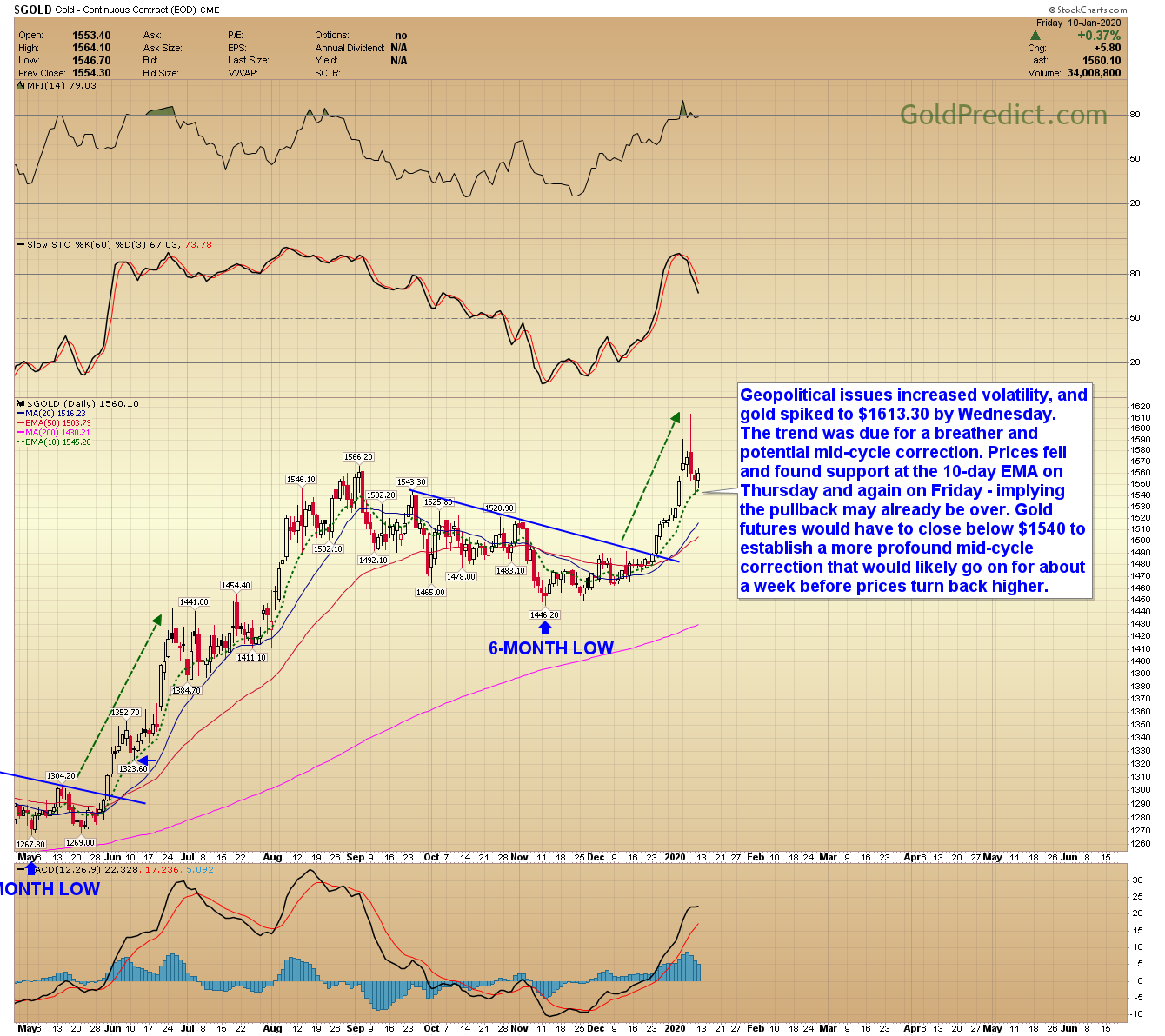 -SILVER- After spiking to $18.90, silver pulled back to $17.82 on Thursday. The 20/50 day moving averages are crossing over bullishly, and the brief pullback may already be over – hard to say. If prices do dip a little further, I see firm support near $17.40. Overall, I expect fresh highs and an accelerated uptrend into March. 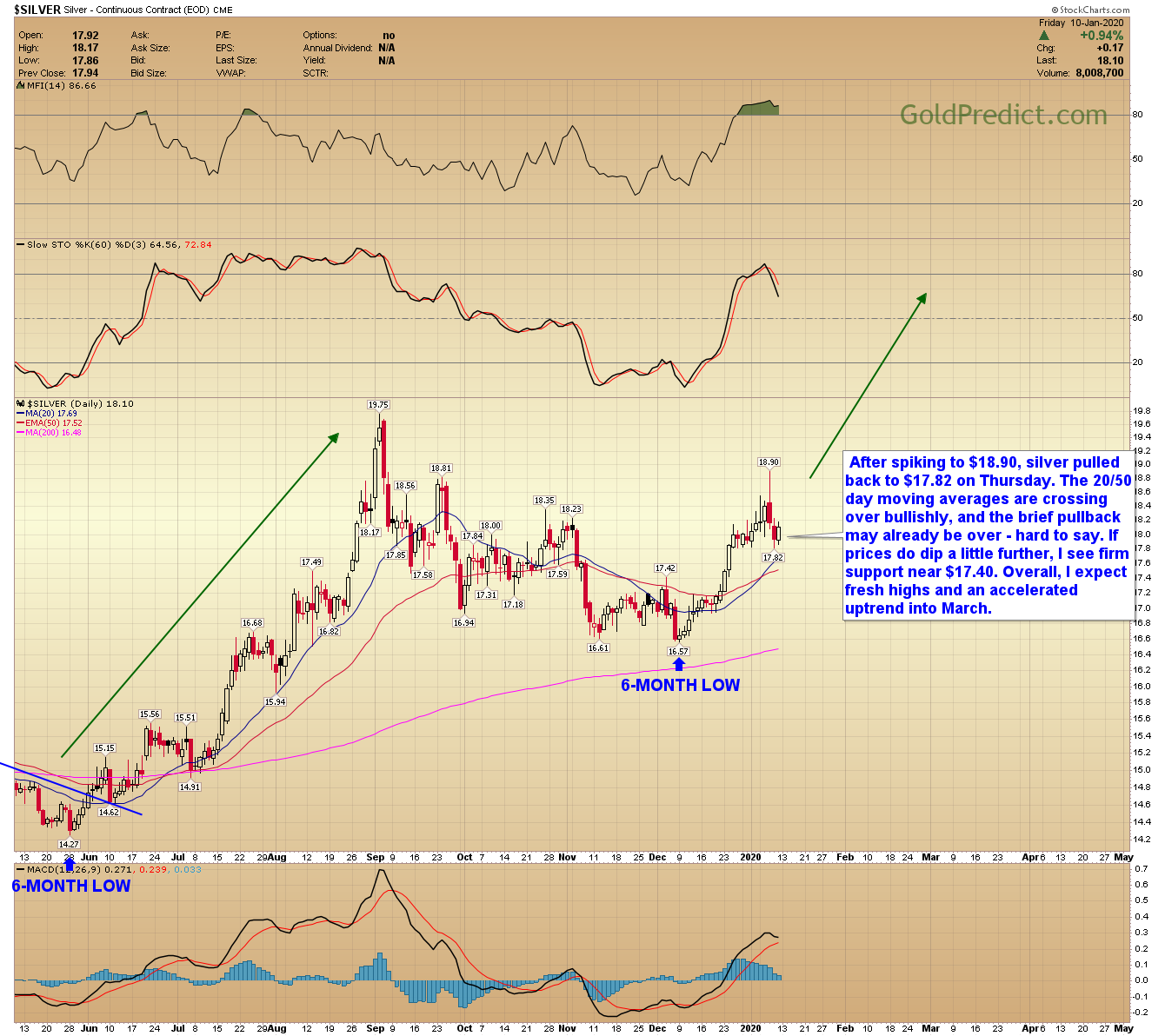 -PLATINUM- Prices pulled back and found support at the previous breakout line. I’m bullish on platinum as well, expecting an accelerated uptrend in 2020. 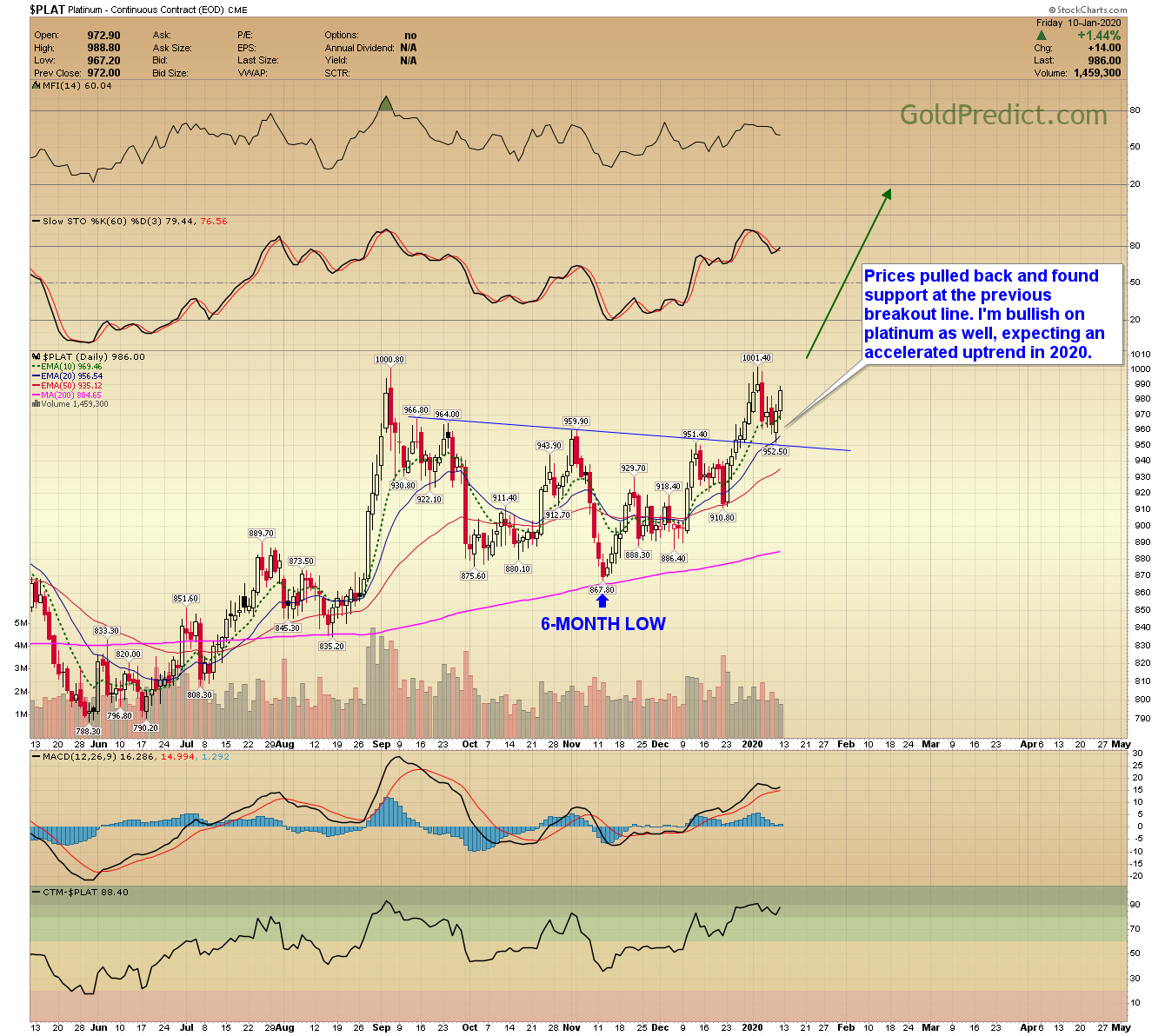 -GDX- The biggest concern coming out of the recent 6-month lows has been the underperformance in GDX. Prices remain below the September high despite fresh highs in gold. On a positive note, prices did hold critical support near $28.00 during the recent selloff. If the pullback is over, then GDX should play catchup during the next advance. 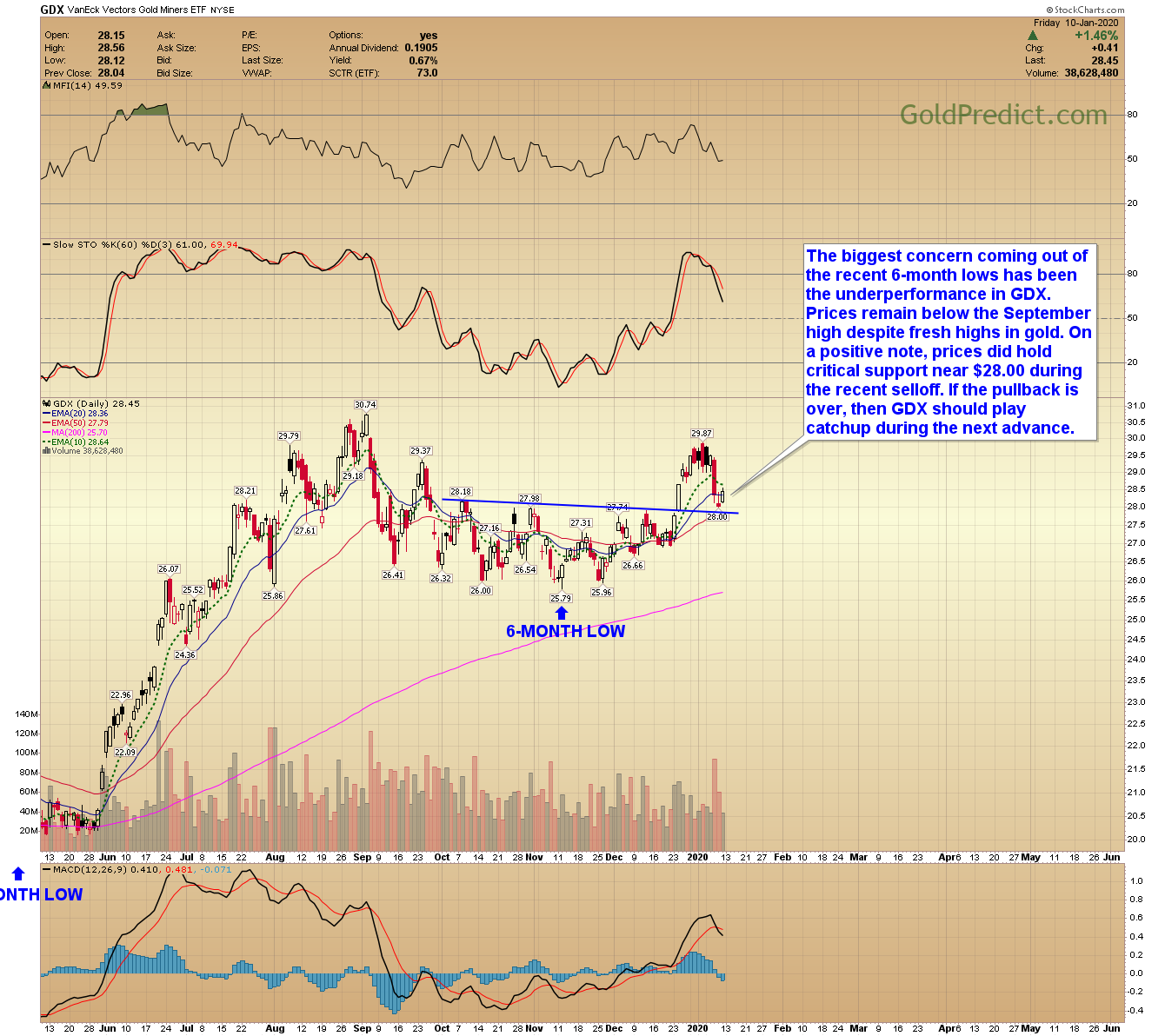 -GDXJ- As long as the $39.50 area holds in juniors, I’ll expect an upside breakout from the rounded bottom consolidation. 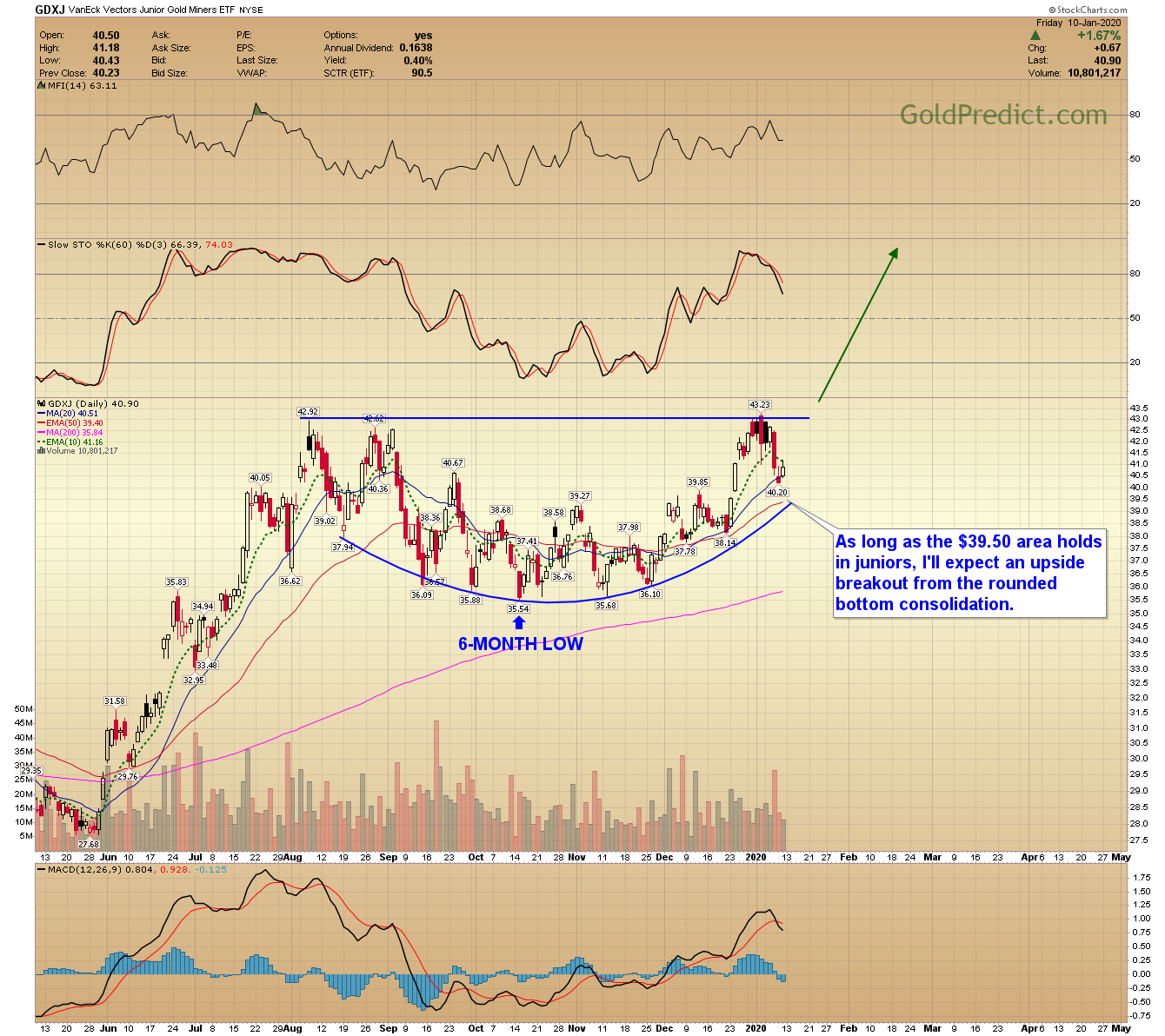 -WTIC- Despite the massive reversal on Thursday, oil remains above the intermediate trendline with 200-day support at $58.00. I’m slowly growing bullish on oil – the Fed wants inflation, and the dollar appears to be rolling over. 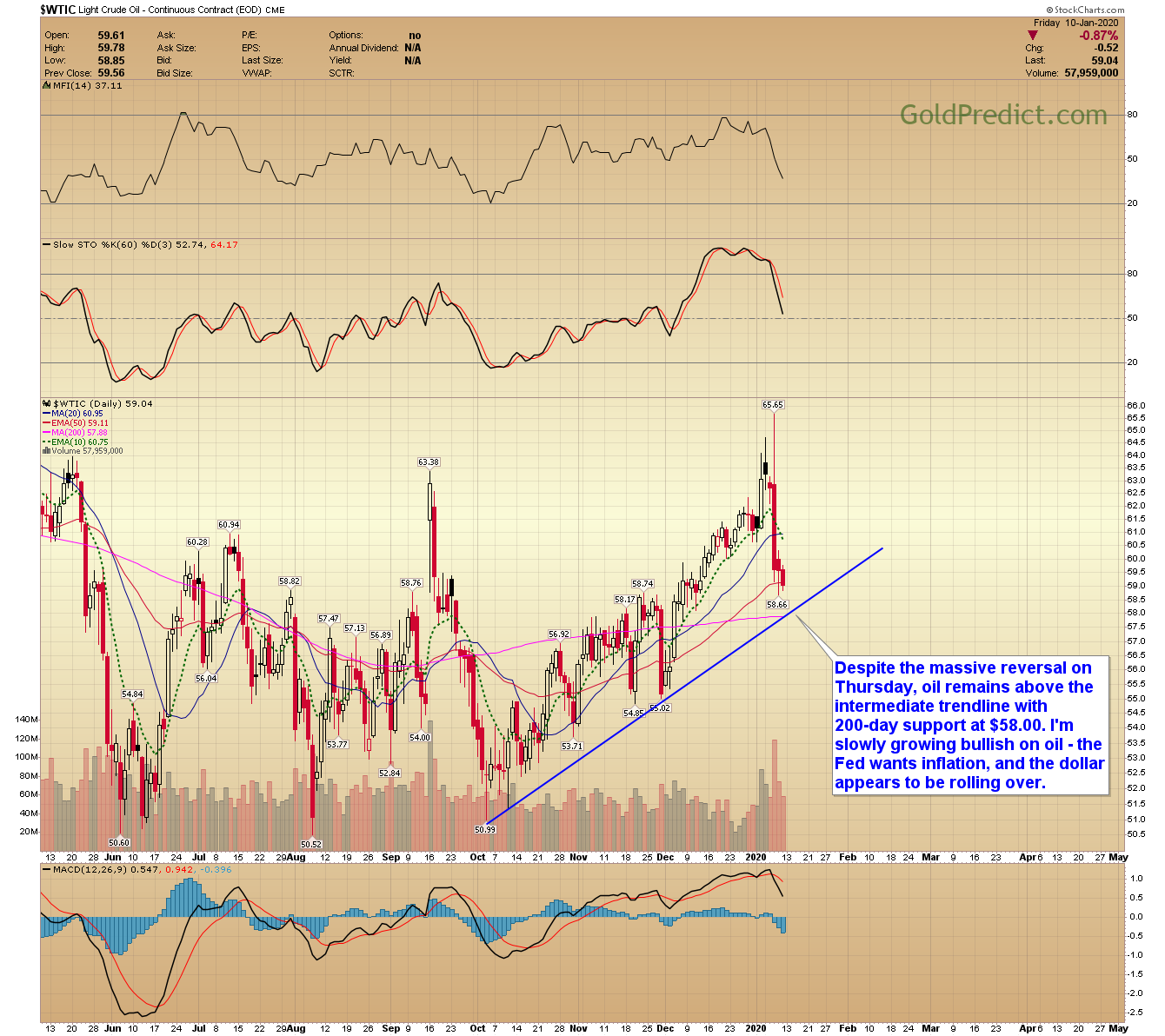 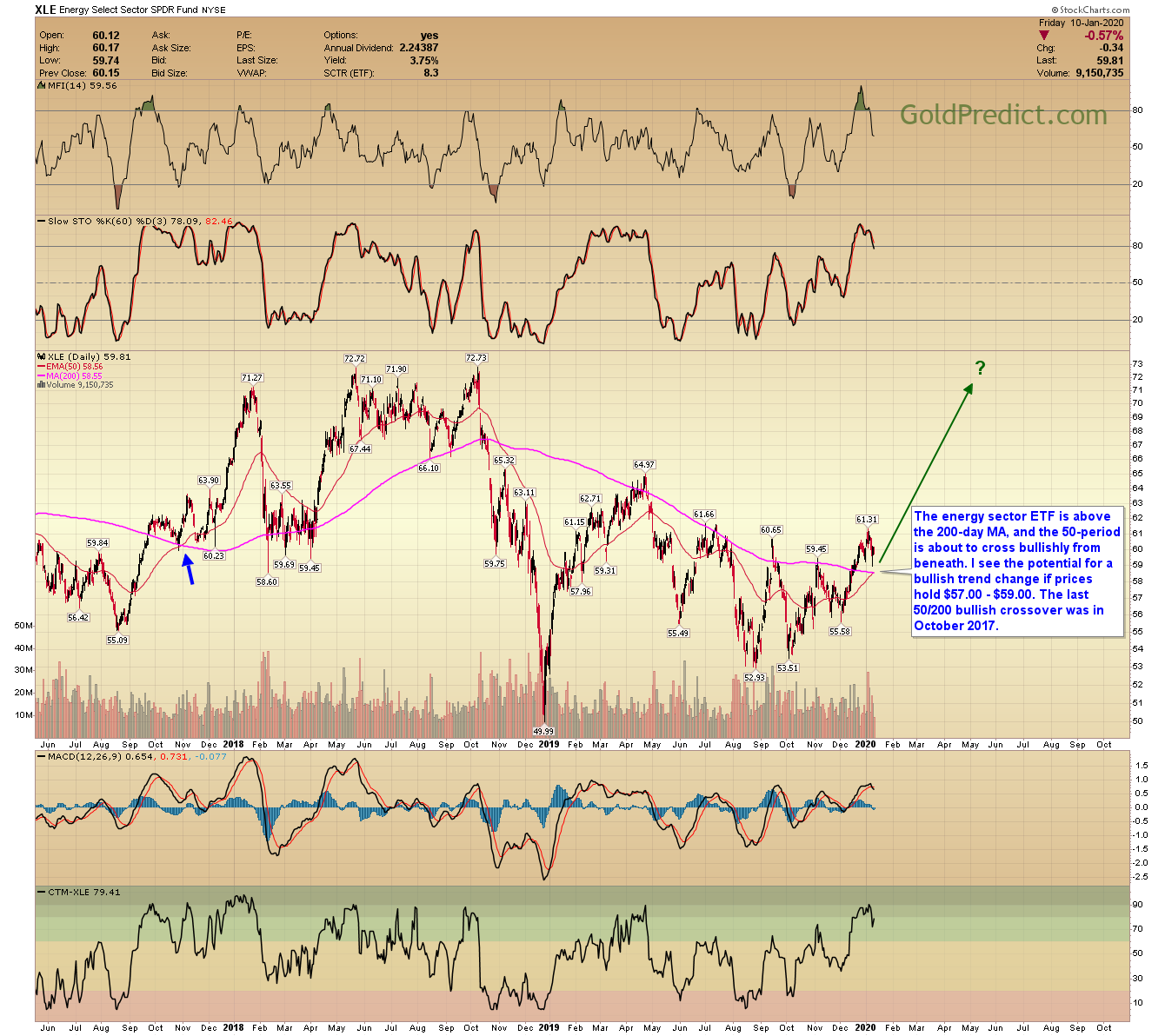 -SPY- Stocks shrugged off geopolitical concerns and rallied to new all-time highs. The rally that began in October is overbought – at some point, stocks should enter a multi-week correction. The overall trend remains bullish. 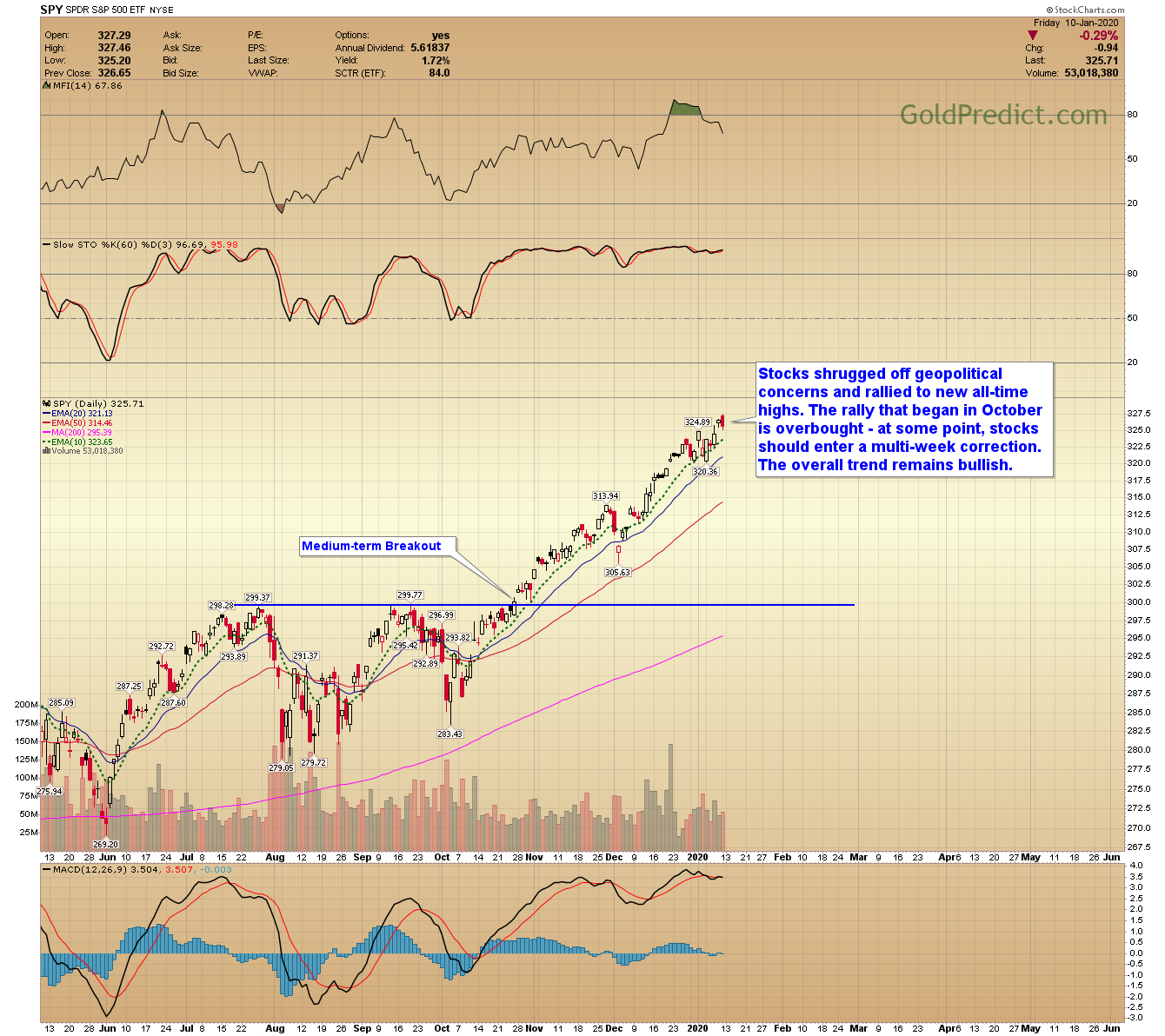 This article was published Posted on January 12, 2020 in Categories Free Updates